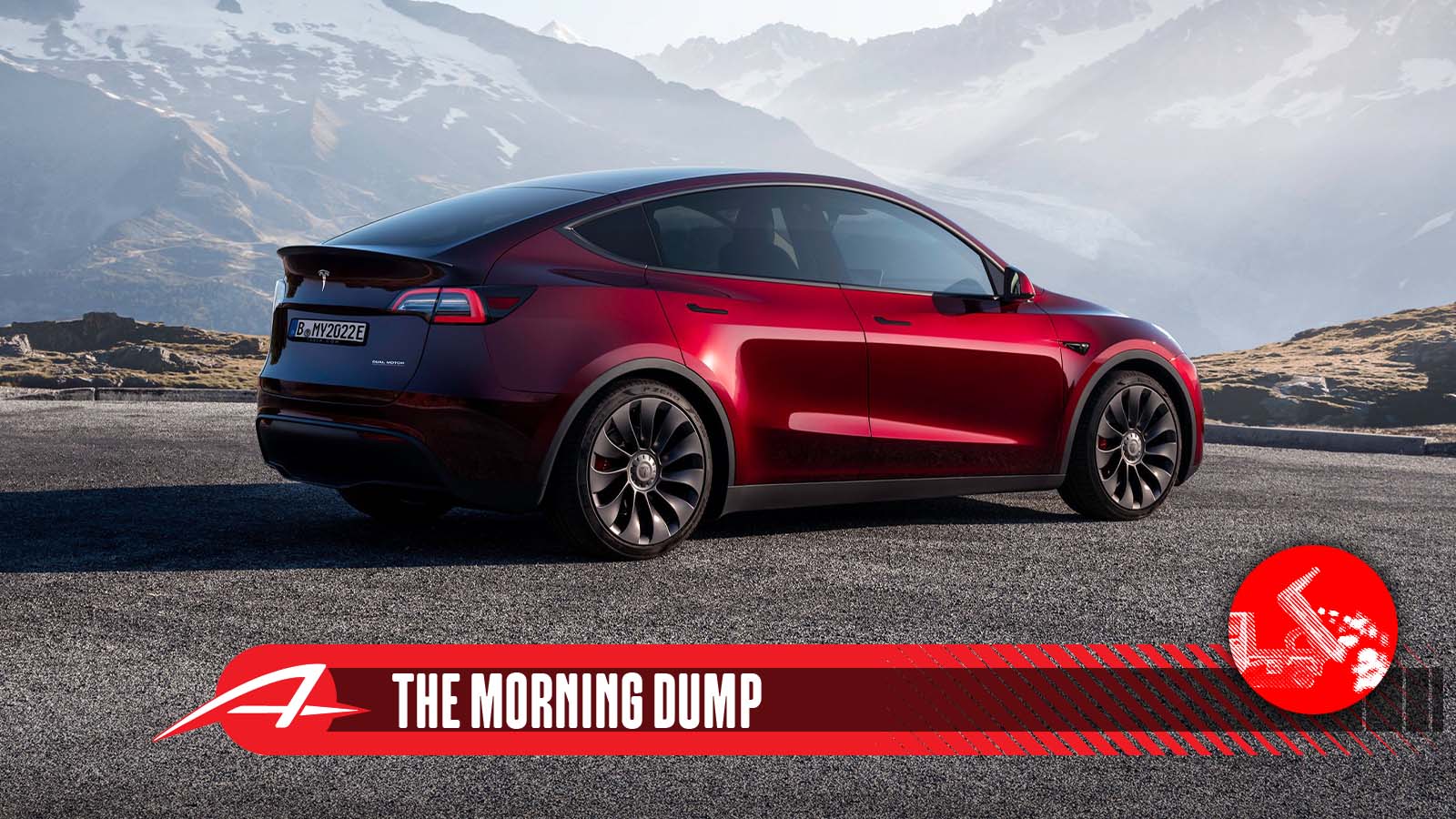 It’s obvious day at The Morning Dump and we’ve got a Tesla recall in China, fiery Secret Service trucks in Nantucket, explosive Hyundai-Kia sales in the US, and a BMW battery that might be a whole lot better.

I don’t know if you know this, but not having lights on your car would be a bad thing. People might crash into you if they don’t see you. Lights are important.

Unfortunately, about 435,000 Tesla Model 3 and Y owners in China are at risk of not having their rear side marker lights illuminate due to a software malfunction according to Reuters, who says the issue counts as a recall. From the news site:

Tesla Inc (TSLA.O) will issue software updates for more than 435,000 vehicles in China to fix an issue with side marker lights that could in extreme circumstances lead to a collision, a regulatory body said.

The fix, which counts as a recall, will be issued by an over-the-air update.

It covers 142,277 Model 3 cars and 292,855 Model Ys, according to a statement by the State Administration for Market Regulation.

This isn’t first time Tesla has had a similar issue. Reuters wrote about a Tesla taillight recall in the U.S. back on November 19. The good news is that it’s software, so Tesla can just do an over-the-air update. Here are some details from that recall:

The company said the recall followed customer complaints it became aware of in late October, largely from foreign markets, claiming vehicle tail lights were not illuminating.

The investigation found in rare cases the lights may intermittently not work due to an anomaly that may cause false fault detections during the vehicle wake-up process. Tesla said it had received three warranty reports over the issue.

This is bad news for Tesla, though, which already had to lower prices/up incentives in China and had another recall last week for a safety belt issue.

[Editor’s Note: Let me make something clear: we’re not reporting something as simple as a side marker light recall because it’s Tesla, but because it’s about marker lights. Wake up, people! Marker lamps are effectively the amber and red beacons that keep human civilization on course. And this issue is the first time marker lights have been threatened due to software reasons, and can be affected remotely. If we don’t keep a close eye on this we could one day see terrorists using cyberwarfare able to disable a whole nation’s maker lamps with a few clicks of a mouse, and that would spell the end of everything.

[Second Editor’s Note: You didn’t think we’d write a story about marker lights with Jason’s input, did you? -DT]

As usual, we go to island newspaper The Nantucket Current for the big news of the week. It turns out President Joe Biden was in Nantucket for a little break and, according to the newspaper, a bunch of his Secret Service vehicles burned to the ground. The vehicles were reportedly rented from Hertz to Biden’s details.

The Secret Service did not immediately return a message from the Current seeking comment, however, Secret Service spokesman Anthony Guglielmi told NBC News that Hertz is investigating the fire, and that the Secret Service is not involved. Guglielmi said he doesn’t have any information on what might have started the fire.

Biden was already gone by the time the fire happened.

I’m not a forensics investigator but… it kinda looks like the Expedition caught on fire first. There’s also a recent recall due to the risk of fires in newer Expeditions that start under the hood “with 18 incidents impacting vehicles owned by rental companies” according to Ford.

Having Cars Is Good If You Want To Sell Them

Today is obvious day and we’ll continue this streak with a report that Hyundai Motor Group (Hyundai + Kia + DeSoto + Genesis) are still killing it in sales. From the CNBC sales report:

The company’s Hyundai, Kia and Genesis brands are expected to capture nearly 11% of the U.S. new vehicle market this year — marking its highest level since the automaker entered the country in 1986. It’s also set to be among the top sellers of electric vehicles this year, trailing only Tesla through the third quarter.

The risk for Hyundai, of course, is that the company is not really set up to get EV incentives for its current electric cars due to the Inflation Reduction Act’s requirements for North American production, an issue the company is quickly trying to remedy.

Sales can always be attributed to making cars that are good and look good (which fits the company), but Hyundai/Kia have also been able to squeeze out more cars, which is helping give the company a boost. You have to have cars to sell in order to sell them.

Expect to see Hyundai/Kia continue to offer incentives to try and grab as much market share as they can while their competitors struggle to keep up.

BMW doesn’t have the best or the worst batteries on the market in terms of helping their cars achieve long driving ranges. This C/D article breaks down EVs by range and BMW is solidly in the middle.

According to Automotive News, BMW is developing a 6th generation battery that offers a 30% increase in performance over the current generation:

A key to the performance is the battery cell’s cylindrical shape, said Simon Erhard, who helps lead Gen 6 development at BMW Group.

While current BMW batteries feature prismatic cells configured in modules bolted together to form a pack, the next-gen design ditches the modules. Its new cell-to-pack design allows more power-packing cells to be squeezed into the same battery footprint. The Gen 6 battery has a diameter of 46 millimeters.

“Energy density is much higher than before,” Erhard told a group of journalists at a media briefing this week. “You can put more cells into the battery pack

In theory, that could mean a BMW iX could travel 420 miles on a charge (per EPA). It’s not that simple, of course, but increasing the density of your battery packs means you can lower weight, which also increases range.

The Secret Service didn’t have any luck with their rental cars. Tell us your worst rental car horror story.

Howdy! I'm the Publisher of The Autopian which means I'm to blame for at least a small part of this. I used to run another car site and then made movies and TV shows. Now I'm here to convince you to buy a Peugeot.
Read All My Posts »
PrevPreviousCheap 1970s European Sports Cars: 1974 MG Midget vs 1971 Opel GT
NextWatch An Absolute Legend Use Their Jeep Wrangler YJ To Tow A Farm ImplementNext