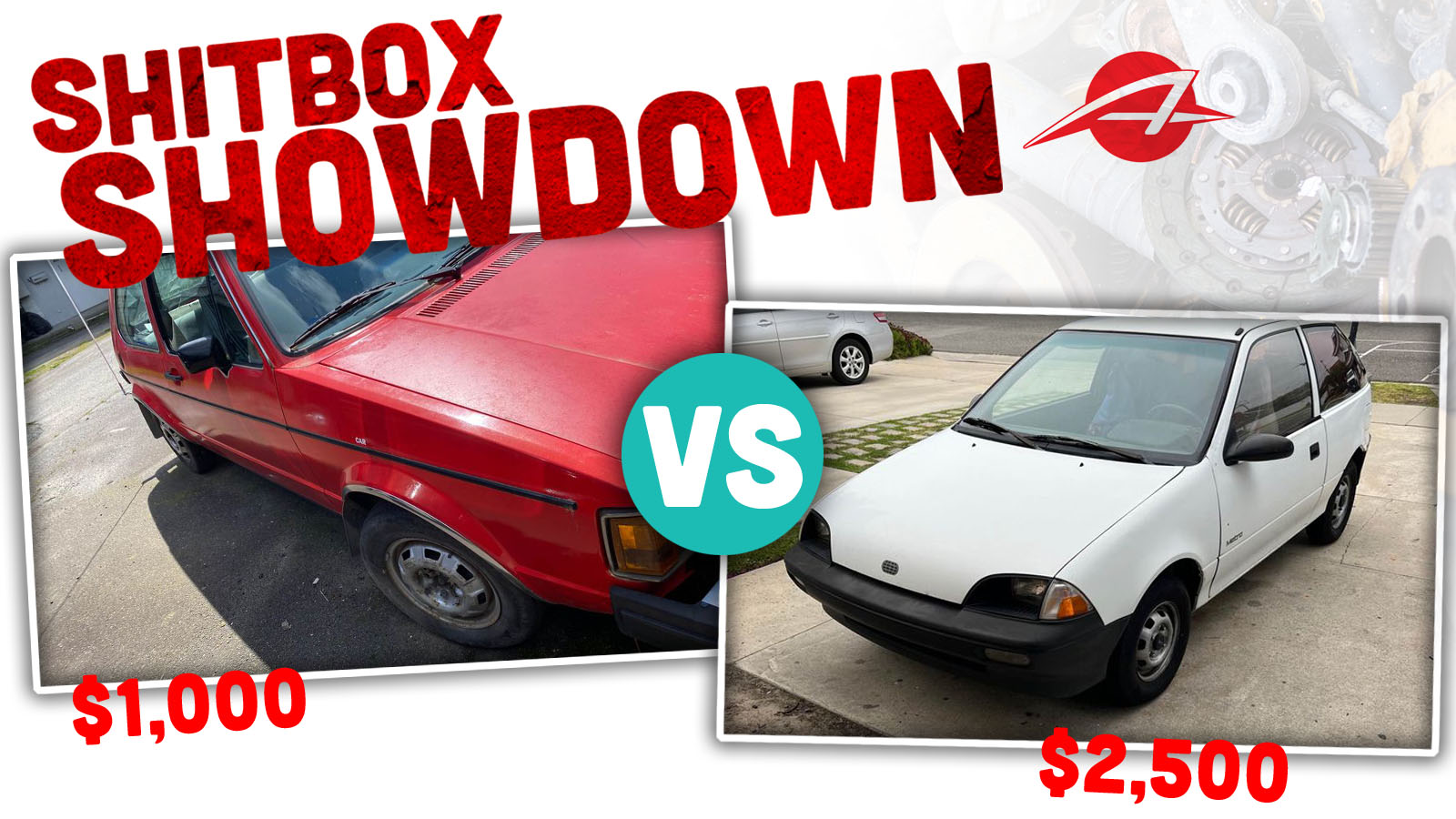 Good morning, Autopians! Hope everyone had a good weekend. Mine was fine, except that I had to fill the gas tank on my daily-driver Corolla. Just shy of fifty bucks. Ouch. It’s no secret that when fuel prices rise, so does the demand for small, fuel-efficient cars, and drivers start considering options they hadn’t thought about in years, like the two we’re going to check out today. First, however, let’s check out last week’s final tally.

Looks like the van has it. Must be Good-Lookin’ Sergey’s influence.

Now, when I was a kid in the late Seventies, I remember hearing my folks complain a lot about high gas prices. Their solution was to buy tiny cars that posted good fuel economy numbers, and use them for everything, even family road trips. You haven’t lived until you’ve toured the Rocky Mountains in a Fiat 128 sedan crammed full of a family of four and two weeks’ worth of luggage and souvenirs. We also had a VW Dasher with a diesel engine for several years; it was rated at 49 MPG highway, and I remember my dad trying everything he could think of to best that number and hit 50. I think he actually did it on one tank.

These days, thanks to modern engines, hybrid drivetrains, and aerodynamics, those sort of mileage figures are attainable with much roomier and nicer cars. But this is Shitbox Showdown, and we have a strict price cap. Is it possible to hit the magical 50 MPG figure and stay within budget? We’re going to look at a couple of little hatchbacks from days of yore that are both at least theoretically capable of it. 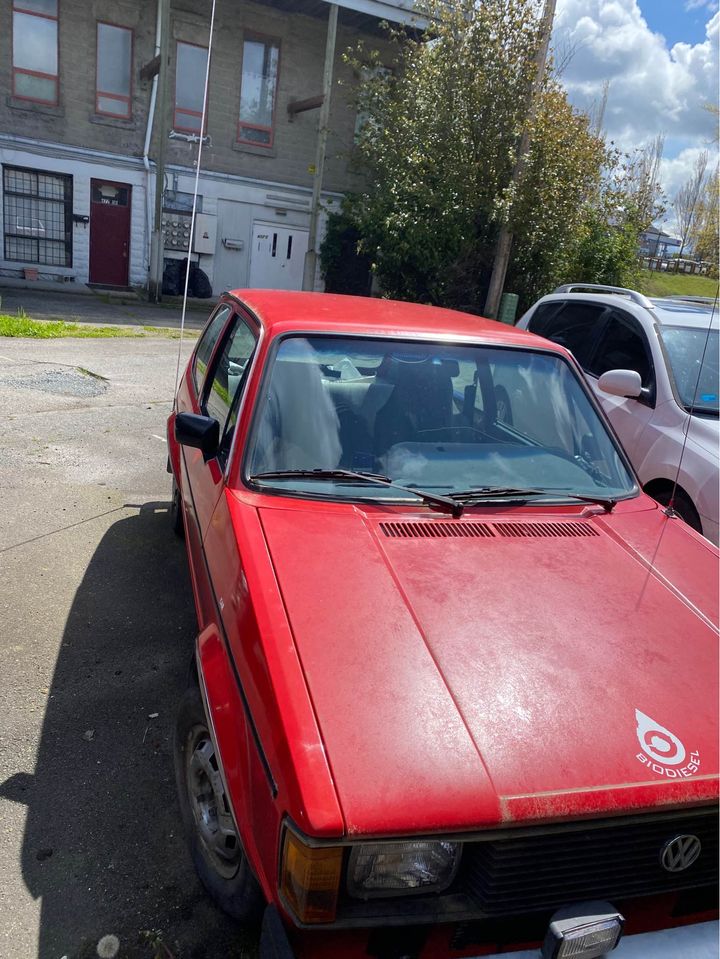 First, let me apologize on behalf of the seller for the terrible photos in this listing. I guess they were trying to keep the license plate number out of frame, but there are better ways to do it. If you’re really that worried about it (and I have never been able to understand why anyone should be), then throw a rag over the plate, or take two seconds in MS Paint to scribble it out, and let us see the damn car you’re trying to sell, would ya? 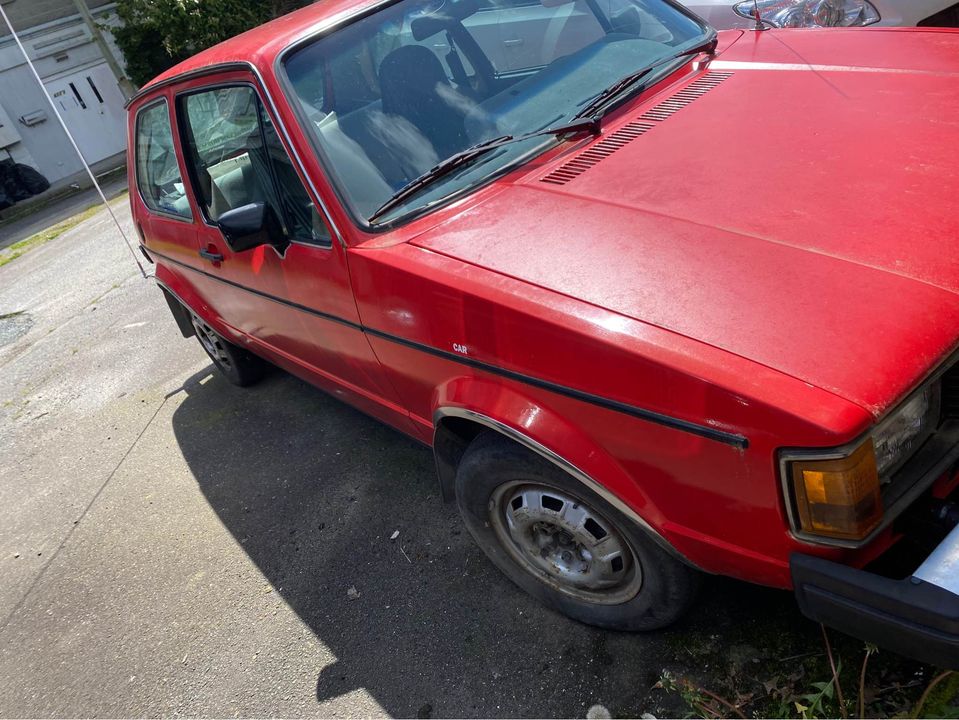 But I digress. What we can see from these awful images is a fairly clean and rust-free Westmoreland-era Rabbit, complete with the square headlights that Jason dislikes so much. But it also looks refrehsingly stock; these days it seems the only way to find a cheap early water-cooled VW that hasn’t been “stanced” or otherwise ruined is to look for a diesel. The “tuners” don’t mess with them. Too slow, I guess. 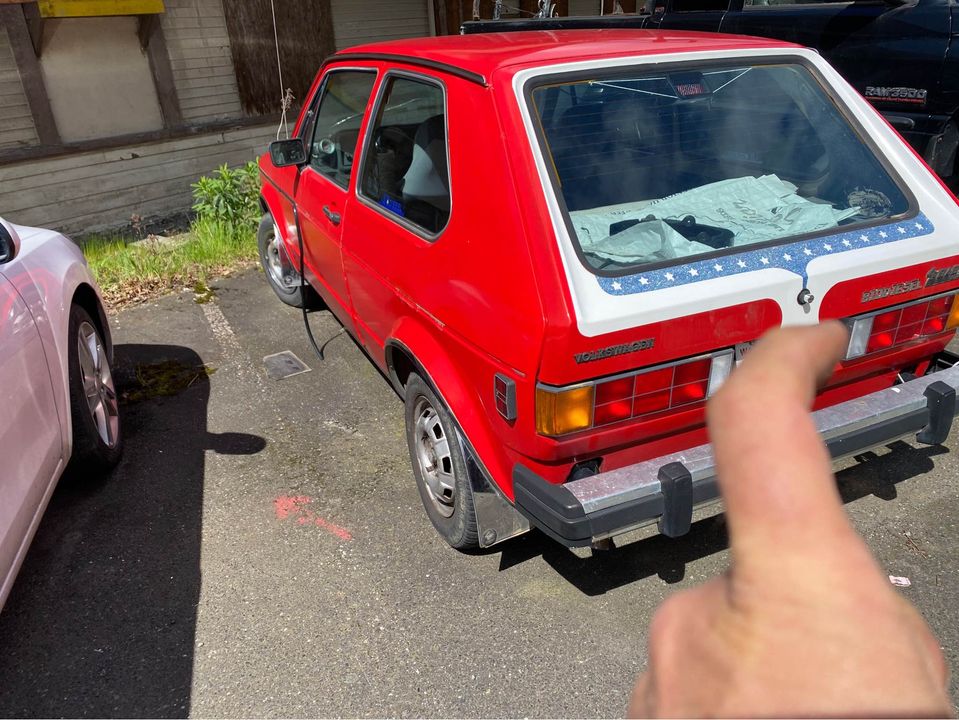 It does have this interesting bit of custom paintwork on the rear hatch, reminiscent of Evel Knievel’s outfit, which raises two questions: 1.) Why? and 2.) Why only there? I have to admit, I like it, I just… don’t get it. 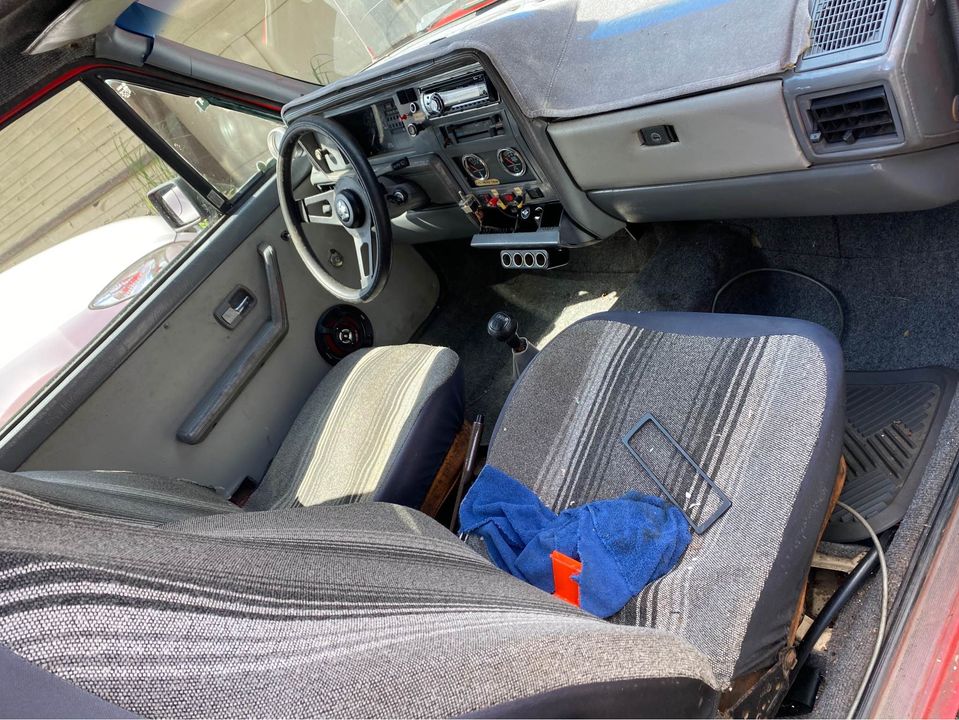 Mechanically, this little Rabbit needs some help. It will run, the seller says, but the injection pump needs rebuilding, and the battery is dead. But these VW diesels are know for racking up a bazillion miles, even if it takes them a while to accumulate those miles, and the early Rabbit/Scirocco/Jettas are fun cars to chuck around, even with the slow-poke diesel motor. For only a grand, this car looks like it might be worth bringing back. And it’s already set up for biodiesel, if that’s your thing. 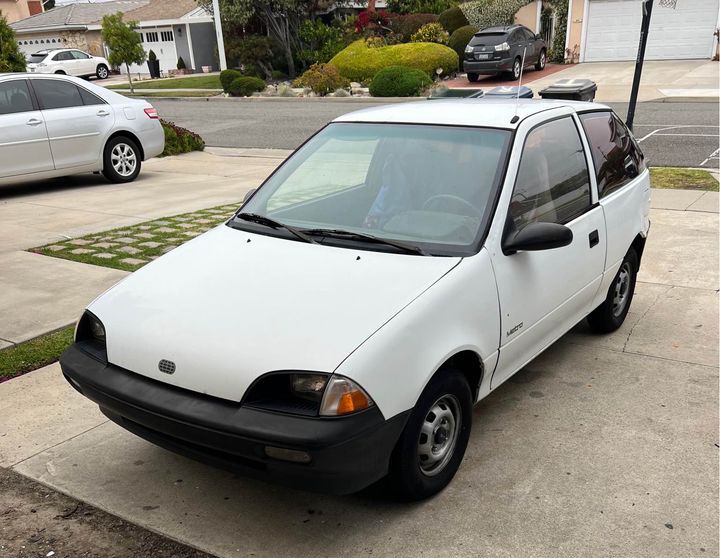 If you’d rather spend a little more and have something ready to drive away in, we have this first-year Geo Metro. These little three-cylinder wonders have been the butt of jokes over the years, but every time gas prices rise, it’s the Metro that has the last laugh. Prices go up, and a surprising number of them come out of the woodwork to be offered for sale. They seem to be aging more gracefully than anyone could have guessed, and were made of tougher stuff than we thought. 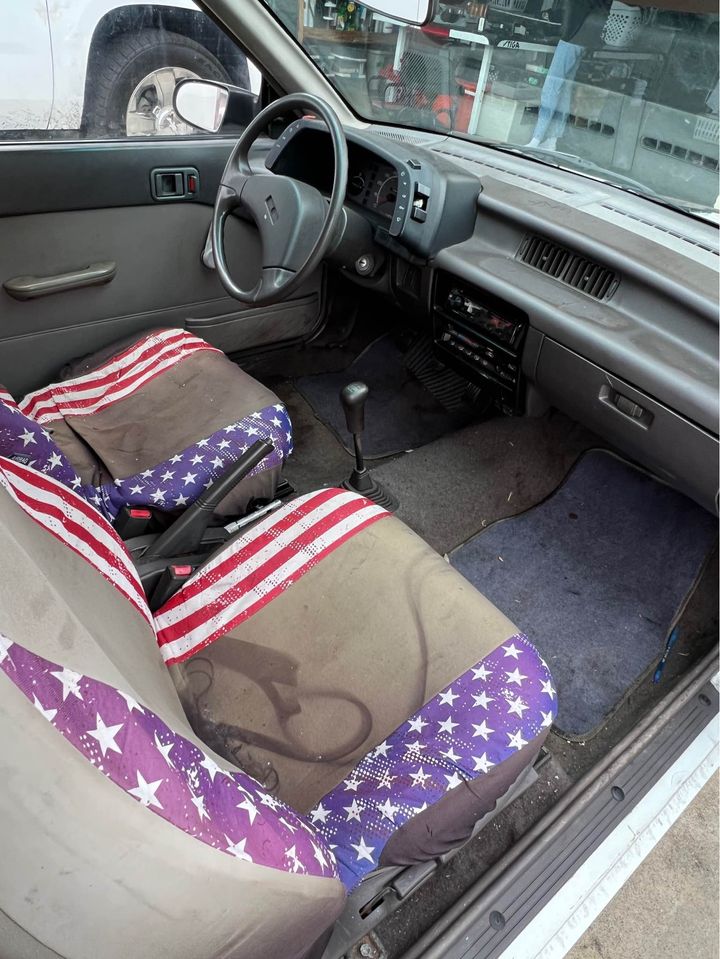 This Metro, as a California car, doesn’t suffer from the rust issues that plague older cars in other parts of the country. The seller says they bought it to learn how to drive a stick, a noble use if there ever was one, and no longer needs it. I don’t know what’s under those strangely patriotic seat covers (kind of a theme today, I guess), but overall it looks like it’s in good condition. If you shampooed the carpets and took a buffer to that appliance-white paint, it would look pretty good for a 33 year old car, I bet. 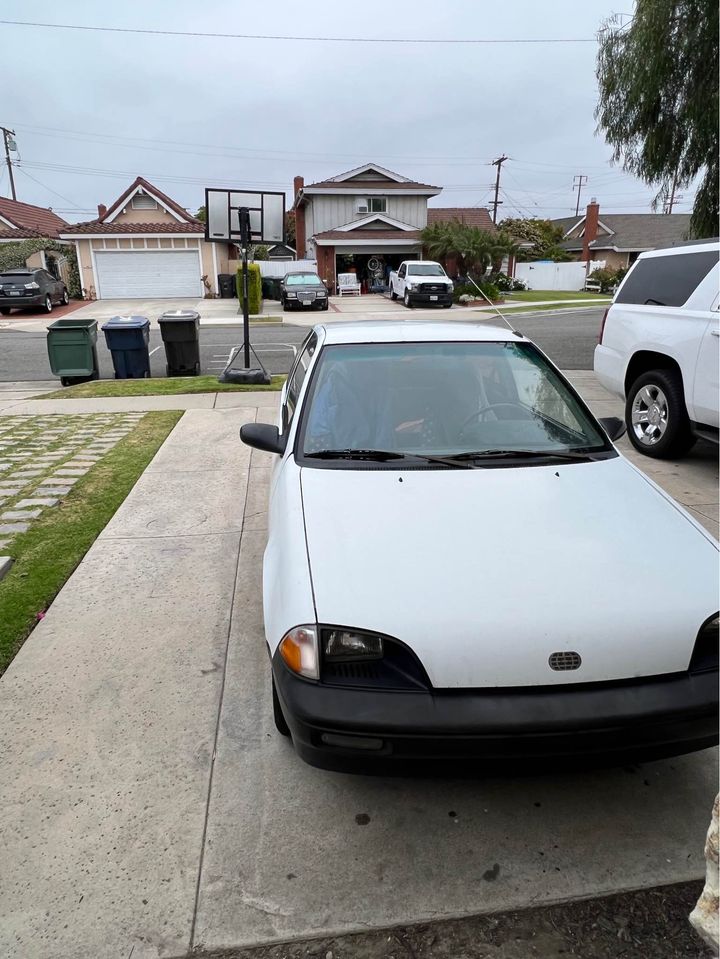 The seller says it runs well, and the Metro’s Suzuki three-cylinder has a good reputation, but it was made for a different time, when traffic was sparser, smaller, and slower. Driving a Metro in traffic these days would require flogging the almighty hell out of it to get up to speed, every time you merged onto a freeway. I don’t know how it would hold up to that. But as a cheap city runabout, it still seems like a good option. 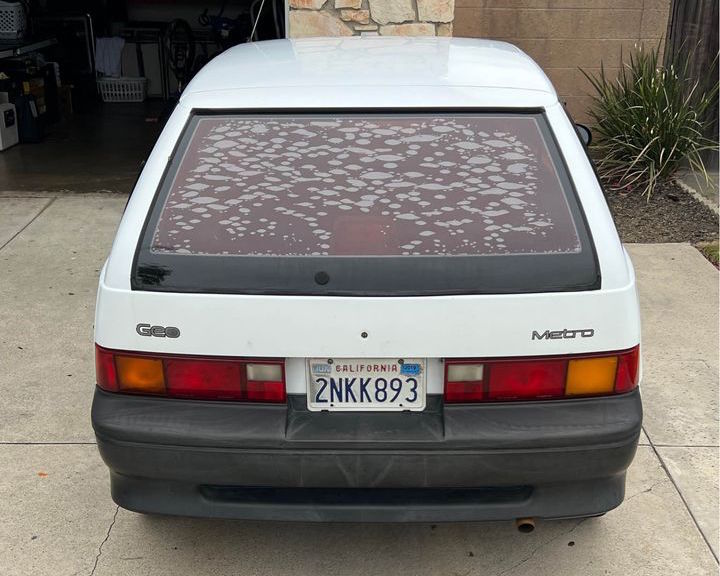 Shame about this cheap do-it-yourself window tinting, though. Hope you’re handy with a scraper; I don’t think it has a rear window defroster to ruin, at least.

And they they are: two ways to save money at the pump and on purchase. Which one would you pick?

Pacific Northwest-based self-taught DIYer of all the things. Current fleet: 1971 MGB GT, 1989 Chevy K1500, 2013 Chrysler 300C, 2003 Infiniti QX4, and 1966 Aristocrat Land Commander trailer. Not to mention about 40 RC cars and around 100 model kits...
Read All My Posts »
PrevPreviousCold Start: Wait, How Did You Get Here, Again?
NextA Team Of Researchers Drove Around To Electric Car Charging Stations To See How Many Worked: Not EnoughNext