The way cars get named has its own subtle but powerful set of rules — rules that, like all good rules, are cruel and unforgiving and arbitrary. Mark Aronoff’s 1981 MIT Press paper Automobile Semantics defines the fundamentals, essentially breaking down rules that we’re all inherently aware of, which is why what I want to discuss with you now is so interesting and important. The MGB is the car I want to talk about, and, if you haven’t thought about it before, the name of that car is about as weird as three letters can be. Let’s look into why.

The name specifies one or more of the following categories: year, make, line, model, and body type. When designating a car fully, all of these categories are specified in the order given:

Less specific designations can be made by using fewer than all five categories, again in the fixed order:

As far as I can tell, all categories are optional, and the only restriction is that the year cannot stand alone: (6) Q: What kind of car do you drive? A: A Chevrolet; a Chevelle; a Malibu; a sedan; ??a 1972

This restriction is pragmatic; it can be traced to the fact that simply giving the model year of the car is not informative enough. We can therefore give the following phrase structure rule for American car names:

So, we all instinctively know this: It would sound weird if I told you that I still had the Beetle 1973 Volkswagen I’ve had since I was 18, for example, even though all of those words are the ones you expect. The order is important, as are the essential categories, and these are never deviated from.

Well, almost never. Sometimes, car names can eliminate the model category, but this really only works if the car company only has one self-named model. Think of the Gordon-Keeble (a fantastic British muscle car of which only 90 were made), or the LaForza, the strangely plain-looking Italian SUV sold in low numbers in the early 1990s (though that car outside of the US was called the Rayton-Fissore Magnum).

Another example of this is how the Volkswagen Beetle (it gets the article because I’m talking about the specific model, see) was just referred to as “the Volkswagen” in many early reviews in America, especially before VW sold anything else. Here’s an example from a 1953 Mechanix Illustrated: 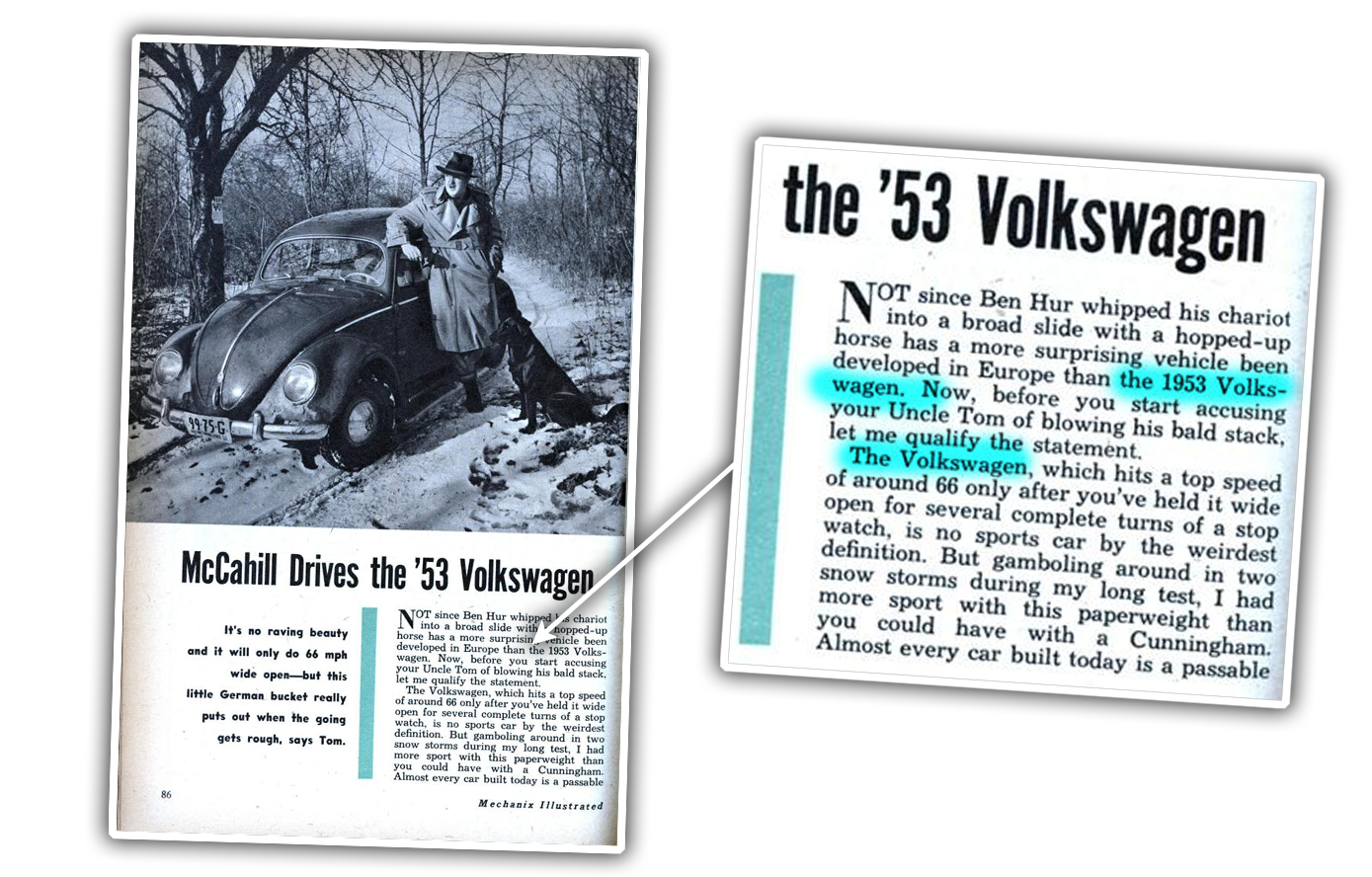 Sure, VW had the Bus since 1950, but it was still pretty unknown in America, so everyone just called it “the Volkswagen,” combining model name and manufacturer. 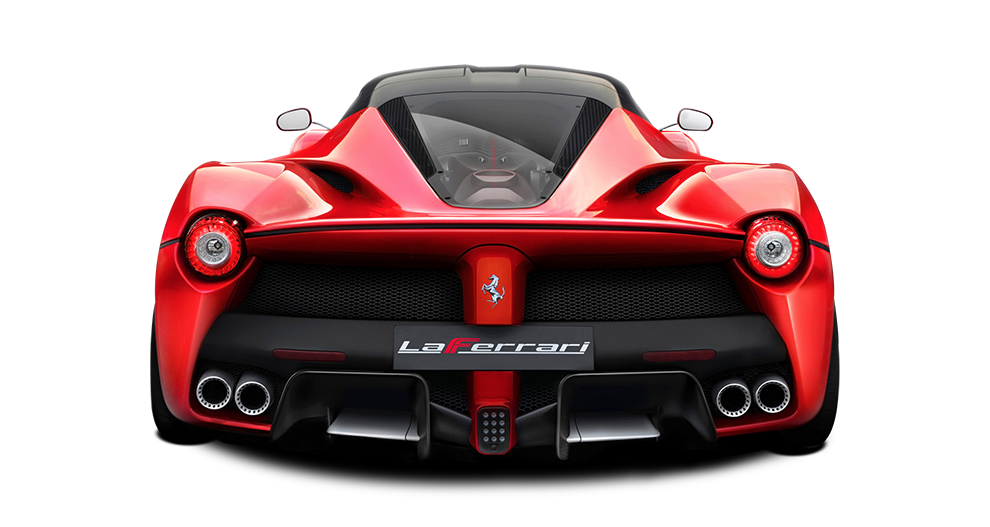 Carmakers have tried this self-naming gambit a few times since; recently, we have the Ferarri LaFerrari, which is pretty damn close to a double name, but not quite, and not quite as close as Chrysler of Australia, who sold a car they called the Chrysler by Chrysler: 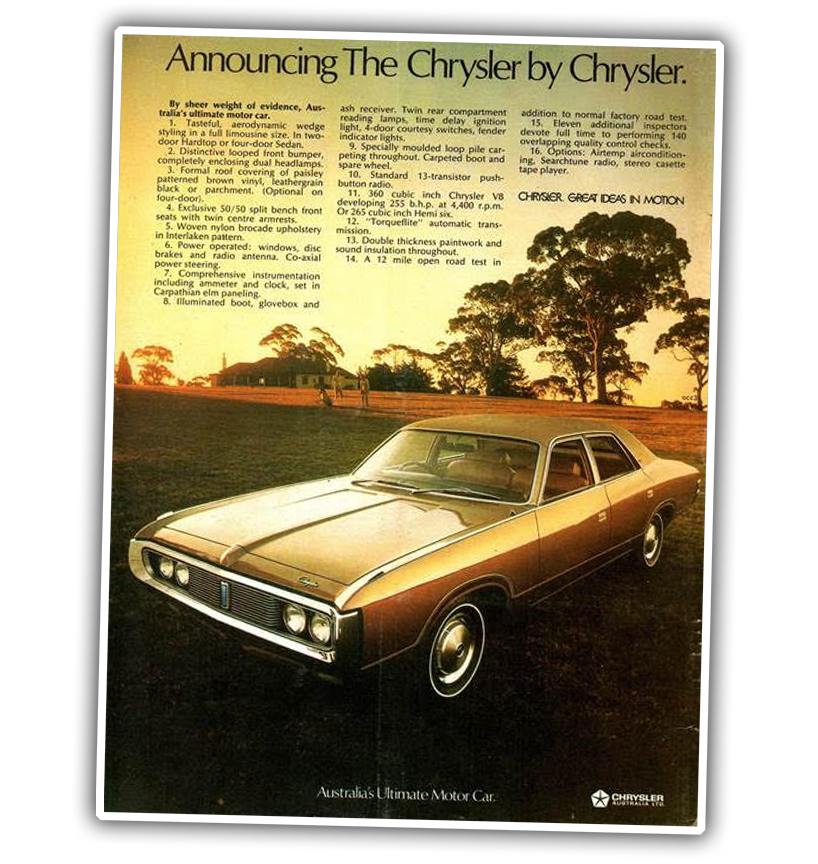 Interestingly, this naming weirdness can’t function on its own, as it needs the preposition “by” to work at all. Chrysler couldn’t bring themselves call it the Chrysler Chrysler, because there are still some rules, dammit.

I don’t get the reasoning why a car maker would pick the Same Name by Same Name construction. Maybe they long for the simplicity of one of those one-car lineups? I don’t know.

Anyway, I bring up all of this as just to help get us all immersed in the framework of automotive nomenclature so you can appreciate the well-known example that breaks the rules: the MGB. 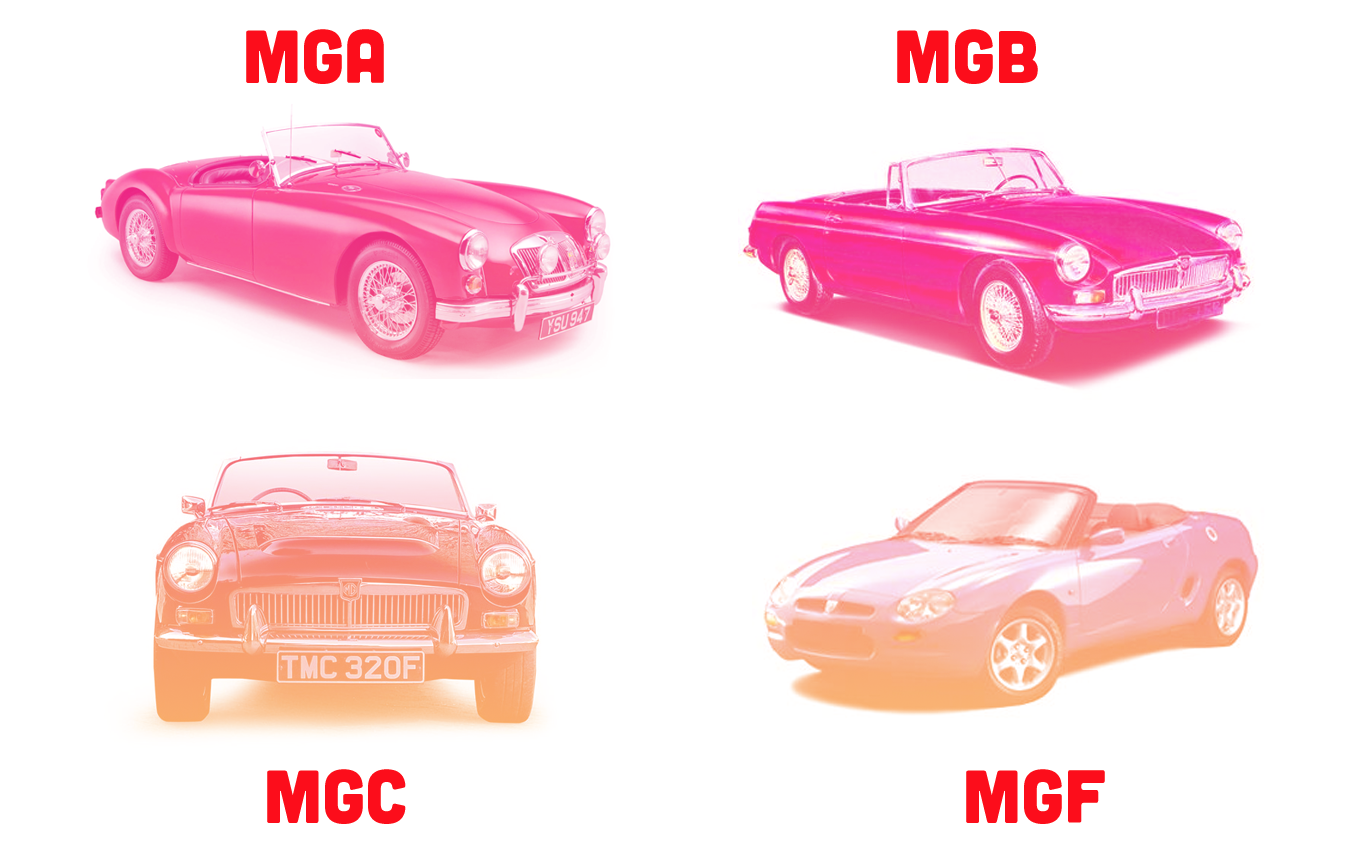 Well, really, the whole line of the letter-based MG names: MGA, MGB, MGC, and MGF. These are strange car names because they combine the company and model into one name, and even if some places may show these as an MG MGB, for example, that’s only so they can fit the name in some database or whatever, because nobody ever calls these cars an MG MGB or MG MGA or whatever. It doesn’t happen.

To make this more baffling, other letter-named MGs don’t fall in this same category, like the MG TD or TF. See? I called it a TF — no MG — because that’s somehow okay, maybe because these cars also had, at one point, the additional model name of Midget: 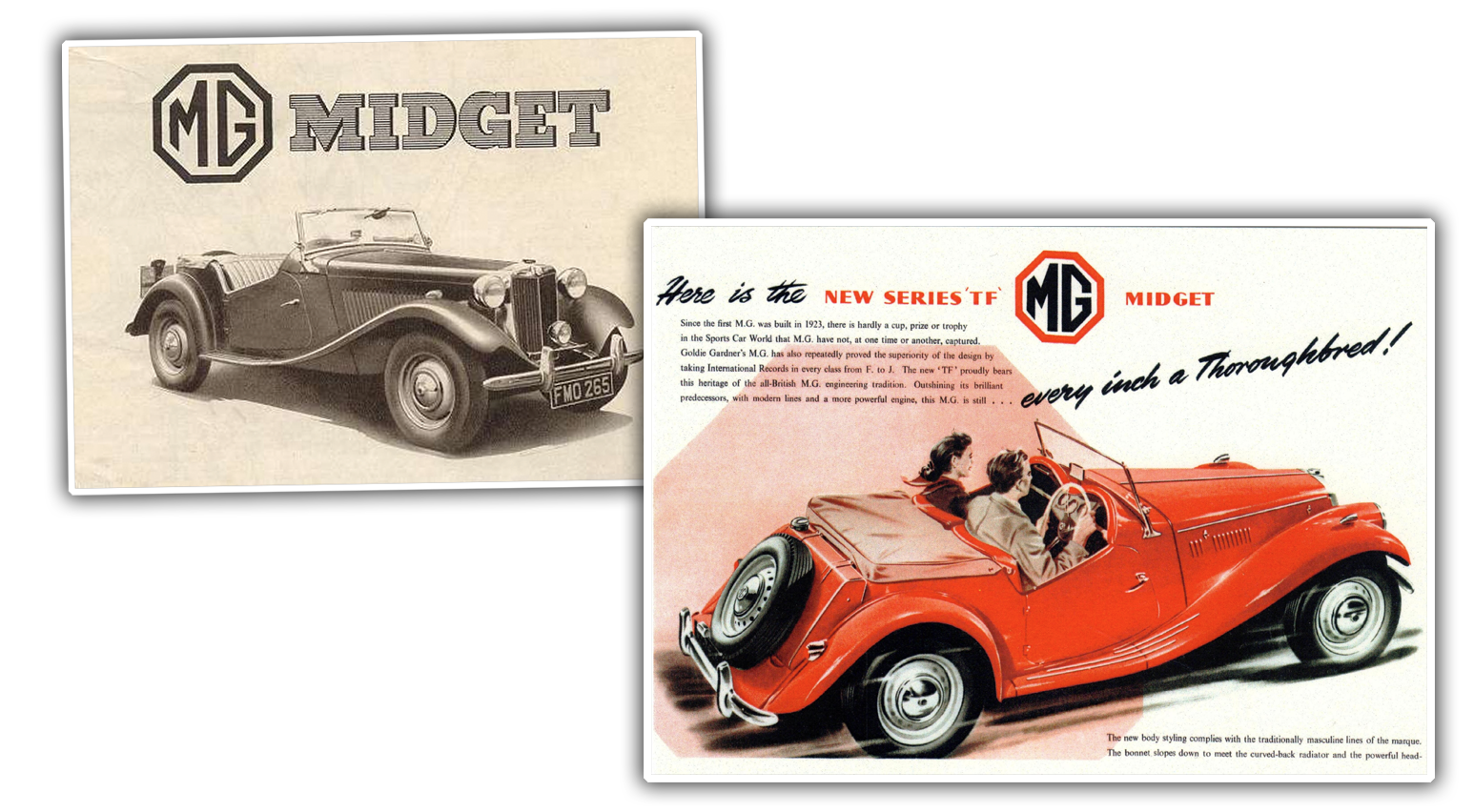 Also, they called it the “Series TF,” for example. MG did a lot of strange things with names.

Still, I’d never call an MGA an A, for example, unless it was in some really, really specific context where MGBs and MGAs and whatever had been discussed immediately before, or something like that. Otherwise, no MGA person says they drive an “A.” 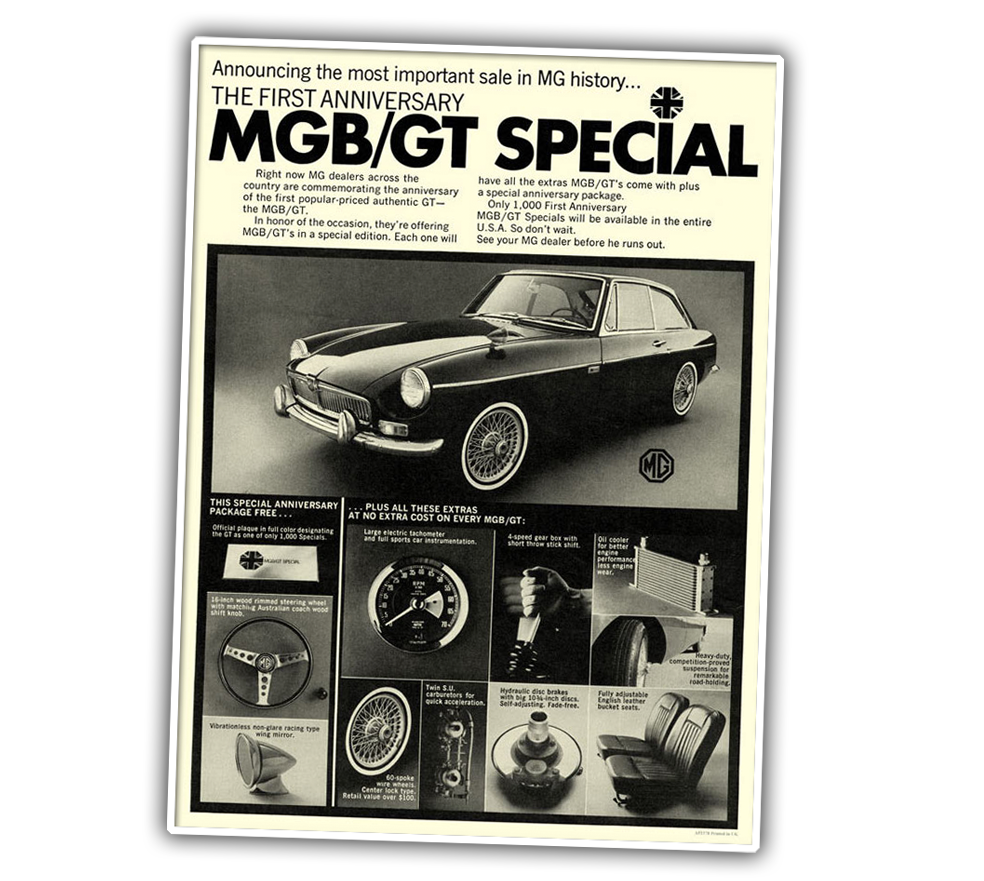 A further example: Look at the MGB/GT, the hatchback coupé variant of the MGB roadster. The company and model are still combined in MGB, but then there’s a slash and the “GT” part. Again, we still have company name and model blended in an unholy fashion. 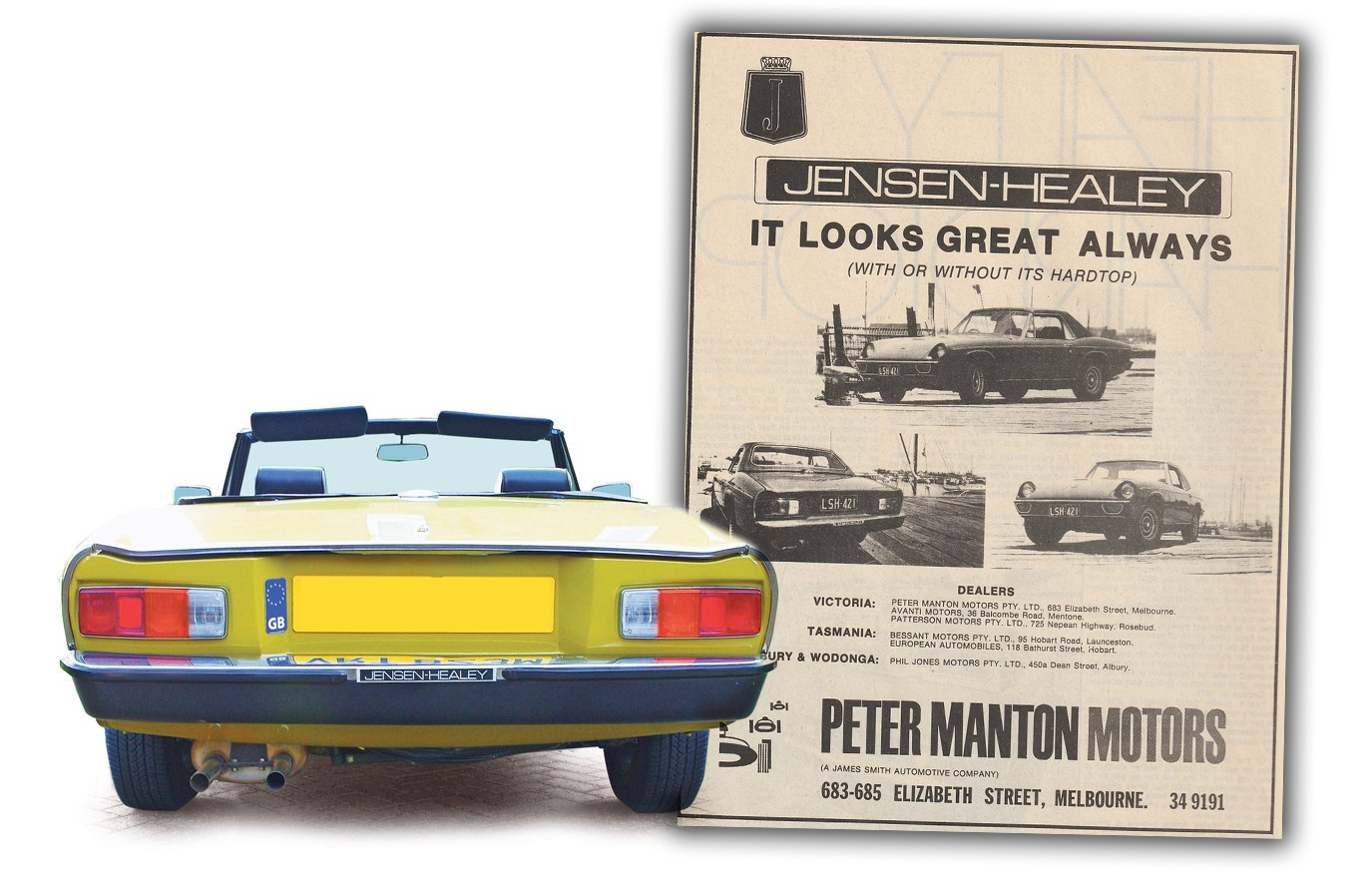 The only other car that comes close to flaunting automotive naming conventions like this might be the Jensen-Healey, but even then it’s not quite the same. Yes, Jensen-Healey is a model name that is sort of combined with its manufacturer name, as Jensen is the company and Jensen-Healey was the car, but the car was a special partnership between Jensen and Donald Healey (not Austin, sorry)— this is unlike MG, who was just doing that crazy shit on its own.

I’m not exactly sure what I’m hoping you’ll take away from this other than a bit of strange admiration for MG, the only carmaker that really managed to pull off a direct subversion of automotive naming conventions and just, somehow, get away with it.

(thanks to the Bishop!)

I'm a co-founder of the Autopian, the site you're on RIGHT NOW! I'm here to talk to you about taillights until you cry and beg me to stop, which I absolutely will not. Sorry. Hug? Also, David's friend.
Read All My Posts »
PrevPreviousHow A Czech Racing Driver Crammed Two Tires Onto One Wheel In Pursuit Of Ultimate Performance, Inspiring The Famous Goodyear ‘Aquatred’ In The Process
NextHow I Got Six Years Of Service Out Of A $220 CarNext