It’s hard to imagine how a nation could go from a global industry leader to barely surviving in their own market within barely a few decades, but it happened. The often-told story of the British automobile industry involves labor relation disasters, complacency towards serious quality issues, and in-fighting between competing brands under the same roof. Ultimately, the result was great English marques being purchased by the Germans and even by companies based in nations like India that had actually been assisted in the startup of their own auto manufacturing by the United Kingdom in the first place. But what if companies like MG had managed to hold out just a bit longer?

With the collapse of parent company British Leyland, some great brands disappeared either permanently or for a long period of time, sports car maker MG probably being the most notable.

Lacking money to create new models, the lineup of MGs in the late seventies was made up of nearly twenty-year-old designs with black rubber bumpers and jacked up suspensions to meet headlight height requirements. 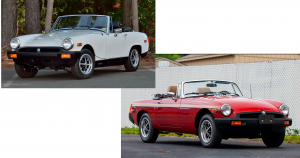 Attempts to continue the name by BL went nowhere; probably for the best considering the rather wonky Triumph TR7-based MGs that were proposed. Jason reported on these earlier if you want to take a deeper look at examples of strange badge engineering:

Once it became clear that Leyland would have to shed the weight of MG in order to survive, Aston Martin stepped up with an offer to take on that sports car brand. There was a multi-phase plan to first update the MGB as best they could, and then make an all-new body version with the same floorpan but new mechanical components to be determined. The Phase I facelift and Phase II redesign were done by none other than William Towns, the person that gave us the knife-edge Lagonda and the wood bodied Hustler, among other things: 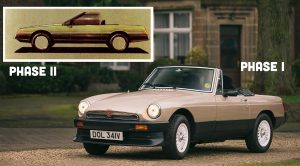 However, the board at Leyland realized that Aston was in worse shape than even they were, and the best solution appeared to be pulling the plug. The MGB and Midget roadsters were discontinued in 1980, with no immediate replacement in sight.

The storied MG name was then stuck onto various hatchbacks and sedans in the eighties; a sad fate for the marque that brought the affordable sports car to the people, especially American buyers who would not get the RV8 and MG-F two seat roadster revivals that appeared briefly much later.

Looking back at 1980, you could argue that there was definitely a need for a new sports car on the market.  The Alfa Romeo and Fiat roadsters available at the time were nearly as old as the MGB, and Leyland’s own rather unloved TR7 was about to go the way of the MG. 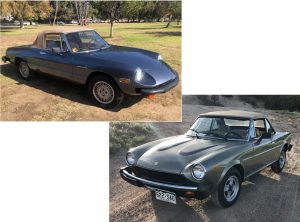 I am not about to even try to discuss the malaise-era politics and labor (sorry, labour) issues of the UK, but Leyland was short on cash, and the government could certainly have fixed that. I mean, they DID give tens of millions to an ex-General Motors executive to build a rather silly gullwinged stainless steel coupe that turned into a disaster, didn’t they?  Wasn’t one of the greatest sports car marques in history (dating back the 1920s) more deserving of the money? Shit, they kept the monarchy around just because they’re part of the British mystique, so roadsters with wood dashboards should have been preserved as well.

Let’s say Leyland did develop a replacement for the MGB, which I guess we can call the MGD (there already was an MGC, the beer that name references was not British, and the disease it is an acronym for was unknown…I think).

To prove how bad things REALLY were in 1980 for Leyland, they didn’t even have a rear drive small car other than the crappy Morris Marina that I could steal parts from for a new MG design. In fact, the situation was so dire that I actually needed to assume that they would redesign and develop an entire other car to use as a donor.

The car I chose to rework was something most Americans don’t even know about: the Triumph Dolomite, particularly the Sprint version. This little sedan featured a surprising-for-the-time four-valve-per-cylinder engine and was, according to contemporary reports, as close as Britain came to a small BMW fighter. Still, the Dolomite was nearly a decade old (and in reality about to be discontinued) in 1980 so a redesign and restyle would have been needed for it to live on in 1981. With the addition of independent rear suspension and four wheel discs, this little bulldog-looking thing would be more crude than products from Munich, but likely be faster and more rortin’ snortin’ fun. 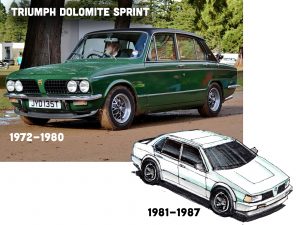 source: Car Throttle and The Bishop

Now that we have worthy modern mechanicals from one fake car to put into another fake car, let’s see how we could apply something like Sir Town’s styling to the new MGD. His Phase II sketch is clean but just looks a bit too squared off, even for him, and it doesn’t look like an MG or even a sports car at all (it looks a bit too much like a nicely modified LeBaron convertible, really). While admittedly in 1981 nobody was doing ‘retro’ yet, even then each new model of a car typically had at least something that called to mind the predecessors, and have some ‘MGness”.

As such, I didn’t go full wedge shape, but I did add a laid-back nose with composite headlights and a reshaped low profile MG grille in chrome to go back to the pre-rubber-bumper style most people preferred. A more raked windscreen fronts a taller cabin, so now the crazy three wiper setup won’t be needed anymore. Smooth alloy wheels go with Town’s typical aesthetic, and also sort of call to mind the simple wheels on early MGBs. The overall look is cleaner and more austere than the outgoing MGB, but still available in glorious shades of brown. 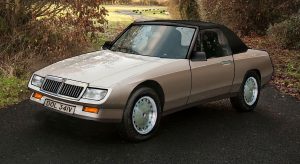 source: The Bishop and Aston.Co

Let’s get the tough part out of the way; we know the US spec nose will NOT be the same, but my design for that at least seems somewhat intentional. Rectangular sealed beams are too small to fit in the Euro opening so they would need to rise like on a Z31 300ZX when illuminated. In the deep chin spoiler we would need to add rubber ram-bar 5MPH bumperettes, which would likely have to exist in back as well (like on a Porsche 928). 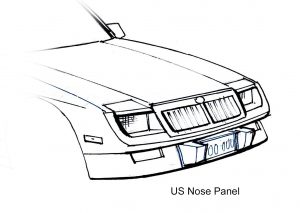 Also like the 928, in back the loop-shaped surround is a flexible body colored piece that mimics the back of the MGB, but the tall taillights of that earlier car are replaced by Rover SD1 units. Also, you might remember that there was a closed MGB coupe called the GT with a rear hatch door, so the MGD could offer this format as well: 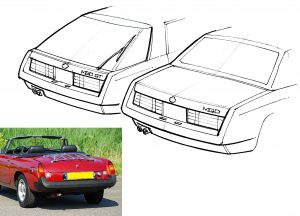 source: Superclassics and The Bishop

Inside, the dashboard features a sweep shape that echoes the traditional MG grille shape, with black or walnut trim surrounding central air vents with a slot pattern that will cause our man Adrian Clarke to start singing God Save The Queen…I mean King, sorry. The trim and specification of the Italian competitors had gone up by then (as had the spending power of the buyers in the demographic) which explains the wood trim plus available power windows and air conditioning. Note the shape and the cut lines on the lower dashboard to allow relatively easy left hand/right hand drive conversion. The large wood panel in front of the passenger is for an airbag that never came; it also might be good to have the fusebox there since you might be accessing that thing more than the radio controls in a British car. I kid! I kid! 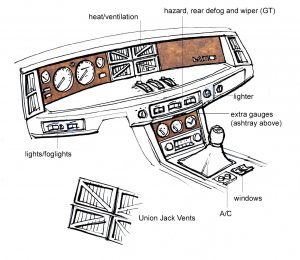 I know what the comments section will say- if the MGD had been produced it would have been a reliability disaster. We’re gonna see anecdotes about English Lucas electrics and why-British-drink-warm-beer jokes. Considering that concurrent Jags and later Sterlings (Honda-based Rover) sold here were still rather nightmarish, I think those predictions would have been true, and I honestly don’t care.

You see, the Japanese spent countless hours on computers replicating the looks and sounds of something that was hammered together in a barn. They in fact made a perfect copy that wouldn’t miss a beat in a quarter million miles. But a pastiche is a pastiche even if it’s a great pastiche, and in my alternate reality you could have had the real thing in the 1980s as long as a little electrical smoke now and then didn’t bother you.

There might still be a British monarchy, but there are no more MG roadsters, and we are a lesser place for it.

Read All My Posts »
PrevPreviousHere’s What I Learned At An Australian Cars And Coffee
NextCan You Guess The Many Borrowed Parts On The Failed Th!nk City EV?Next