Yesterday I put my beloved $700 Chevrolet Tracker for sale on Facebook Marketplace, and within a few hours I received a message from a gentleman by the name of Florentin. “Hi David, I think I just passed this car today it was parked on [redacted] Rd. At the house with all the trucks in the yard? Is that your place? I always thought that guy works on a lot of cool cars.” I responded with an affirmative, at which point Florentin asked me for a favor. You see, he’s in a bit of a predicament.

This person responding to my Facebook ad had no interest in buying my now-rather-beautiful five-speed Chevy Tracker, what he had was a problem. “Cool man. I have been driving by your house for a while and seems like you know your way around these trucks. Do you just work for friends or also do repairs for other people? I really need some help,” he began a rather large message.

“I was actually thinking about stopping by that house to ask for help and then seen this post with the car I just saw in your driveway. What are the chances? I bought a 2002 Lexus LX470 recently and the AHC system was bad as it had a bad front shock. I bought an Ironman 2” lift kit with shocks, springs, torsion bars and front diff drop to convert it. I lifted it up on jacks in my back yard to work on it myself after watching a YouTube video and soon realized it’s beyond my skill level since I’m not a mechanic,” he continued, before saying his friends didn’t have time to help him get his suspension back in order.

“I was able to do front shocks, swap the torsion bars, and got stuck on the rear shocks,” he told me. “I took the AHC lines off but couldn’t get the rear shocks off myself. I need to do the back shocks and springs, front diff drop, and make sure it’s all leveled.”

Then came the kicker:

“Would you have any interest to come see if you finish this for me? I really need this car for winter since my rwd bmw is not well suited for my work in the winter. I would pay you for your work. I just need to finish this. If you can help that would be amazing.”

I responded with the truth: I just don’t have time for this. I was supposed to have moved to LA months ago, but that’s gotten kicked down the road in large part because I have too many cars, and I need to get them fixed and sold soon. Then I need to actually find an apartment, pack all my things, and road trip multiple vehicles. All the while, I have to run a business.

Florentin told me he understood, and even offered to help me wrench on my stuff, as he’d like to learn a thing or two.

At this point, I was sitting in a bar by myself wolfing down an ice cream-covered brownie, contemplating all the stuff I have to do. And yet, I couldn’t get this random person, whom I’ve never met, off my mind. The winter is coming. It’s about to be ass-cold, and this poor bastard is going to be without his winter-crushing 2002 Lexus LX470. He may have to tow the thing to a garage and pay an exorbitant sum. I could help him.

But I don’t have time. But then, maybe I do? I mean, sure, I should be fixing and selling my own cars, but why am I any more important than this guy? He seems like a nice dude. He works in the healthcare field; who knows, maybe people’s lives depend on him? Plus, think about how much he’d appreciate it, given how thoroughly screwed he feels at this point. I could be that calming, steadying, rust-healing force for him — someone to tell him “There, there. It ain’t nothin’ that my cheater bar and torch can’t handle” as I crack open a can of beer (I don’t actually drink beer, but it’s imaginary instances like these that make me sometimes wish I did) and smoothly twist out a hideously rusty bolt. 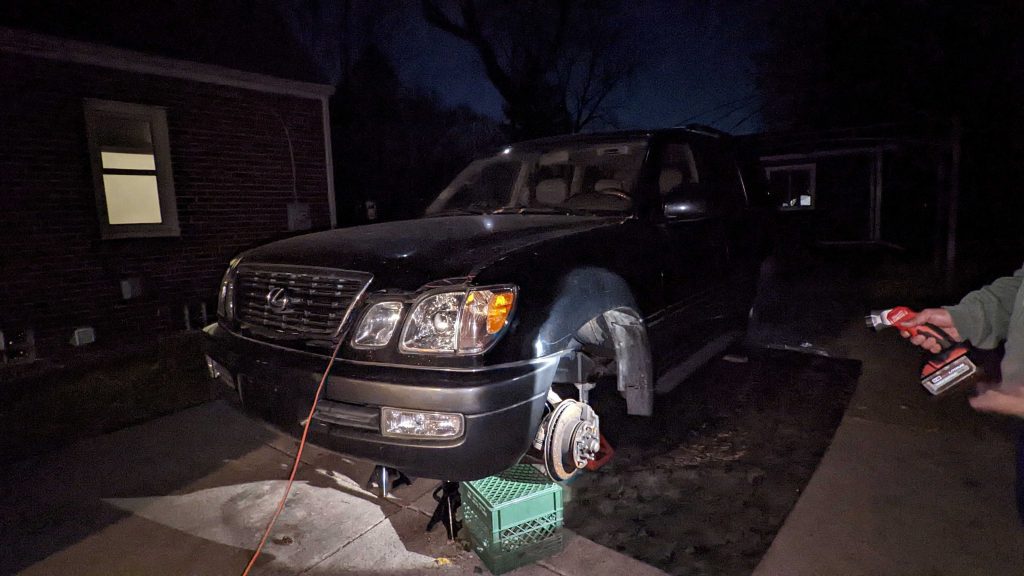 Anyway, as I sat there unashamed after having eaten a huge brownie all by myself at a bar, I texted Florentin: “Okay I’m down.” Then I drove to his house to assess the situation. That’s what you see in the top photo; the Lexus is currently sitting on jack stands. Up front, new shocks glisten among the rusty metal, while brake calipers sit awaiting new pads. In the rear, old springs and shocks need to be removed, though new rotors are already in place. 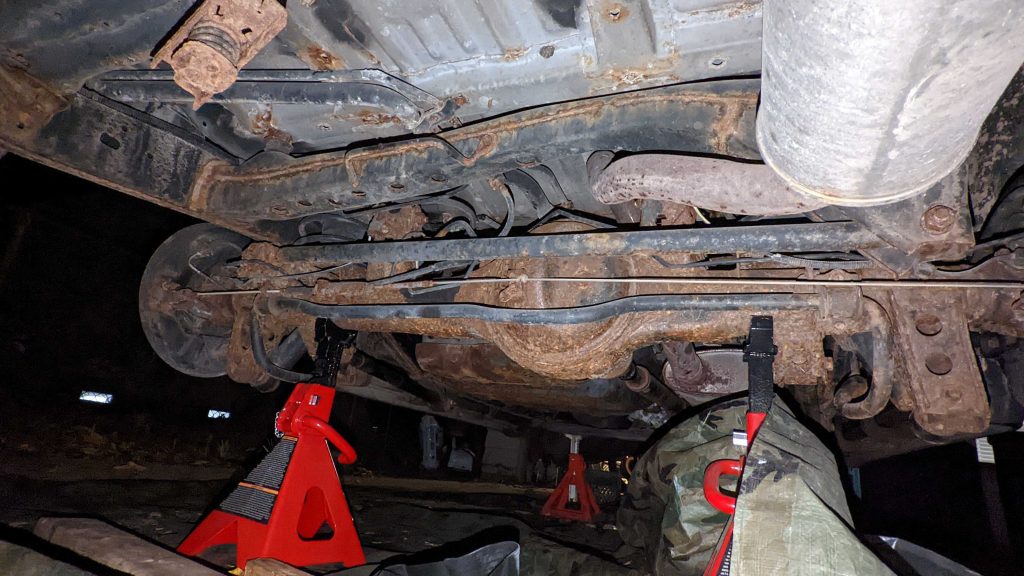 Any, if any of you readers want to eat pizza, crack some brews (or cokes), and tackle some fasteners on the HMS Land Cruiser you see above, let me know.