A Look At A 1950s Messerschmitt KR200’s Steering Yoke, Which Is Cooler Than Tesla’s

I’ve noticed on the World Wide Web that there’s been a spike in interest in yoke-style steering wheels as of late, what with Lexus and Tesla trying out diffferent methods of controlling the direction of a moving vehicle.  Well, here at Lane Motor Museum (where I work), we have in the collection the O.G. of yoke steering devices: a funky microcar from post-war Germany called the Messerschmitt KR200.

[Editor’s Note: Rex here works at America’s quirkiest car museum, the Lane Motor Museum — a place filled with some of the weirdest cars you’ve never heard of. His column here on The Autopian gives us a backstage pass into his strange world. -DT] 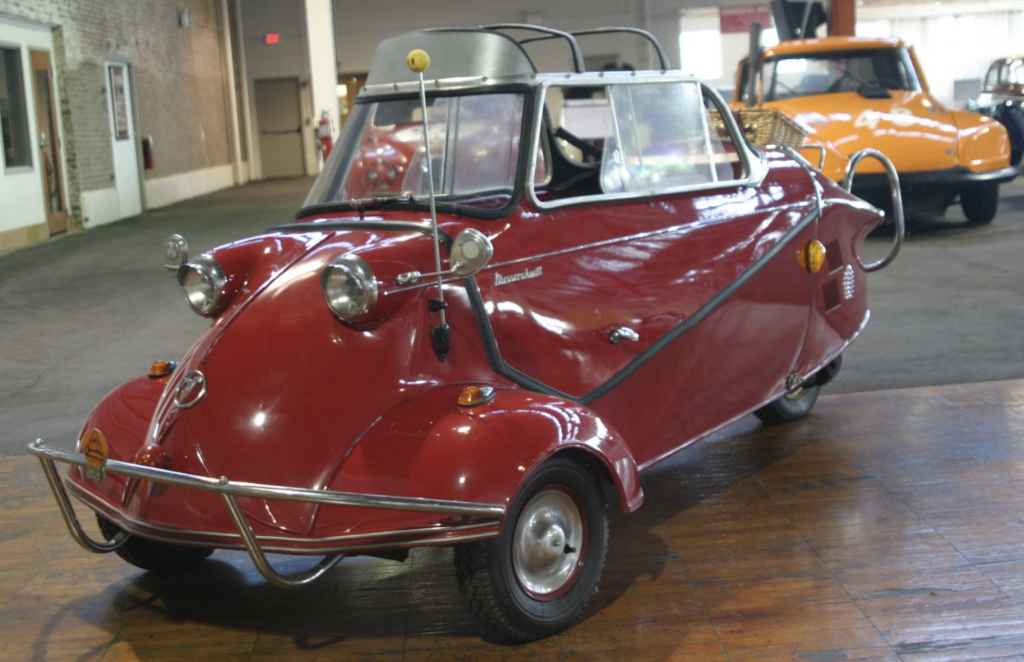 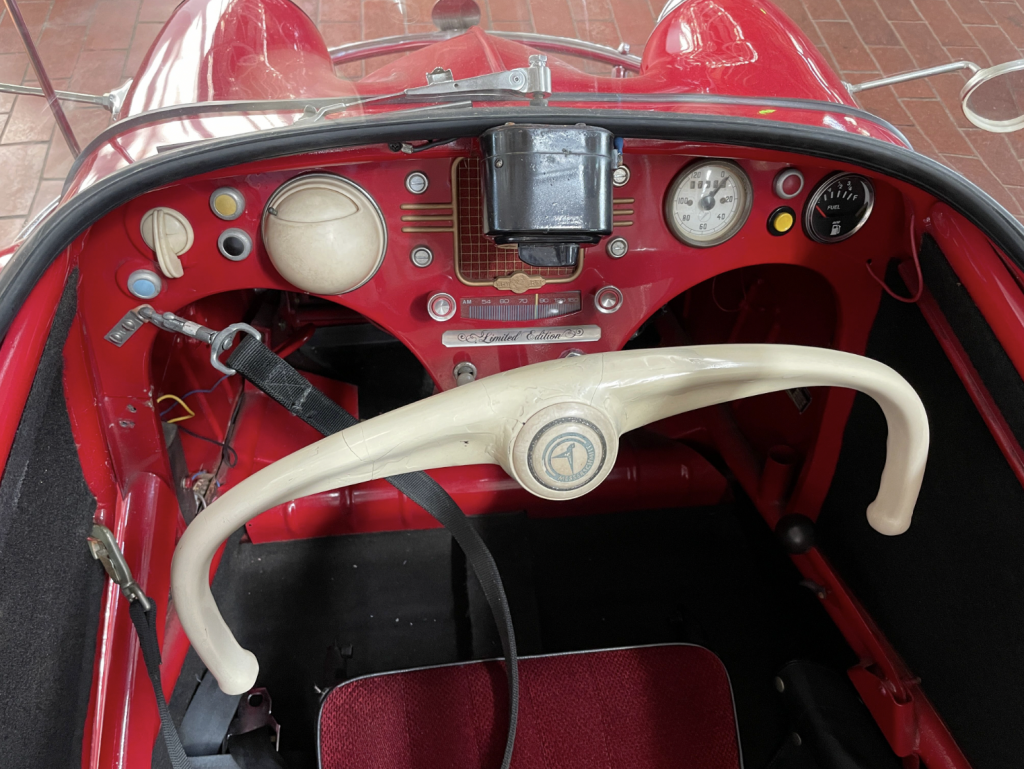 Every spring, we let our museum members drive a selection of microcars around a small autocross course that we set up in our back parking lot. This year we featured the famous two-seat Peel Trident (the overall favorite), a Trojan 200 (with a front opening door like a BMW Isetta), and our subject today, the glorious Messerschmitt Kabinenoller (translated as Cabin Scooter), with its bonkers airplane-inspired canopy opening, tandem seating, and its yoke-style tiller. 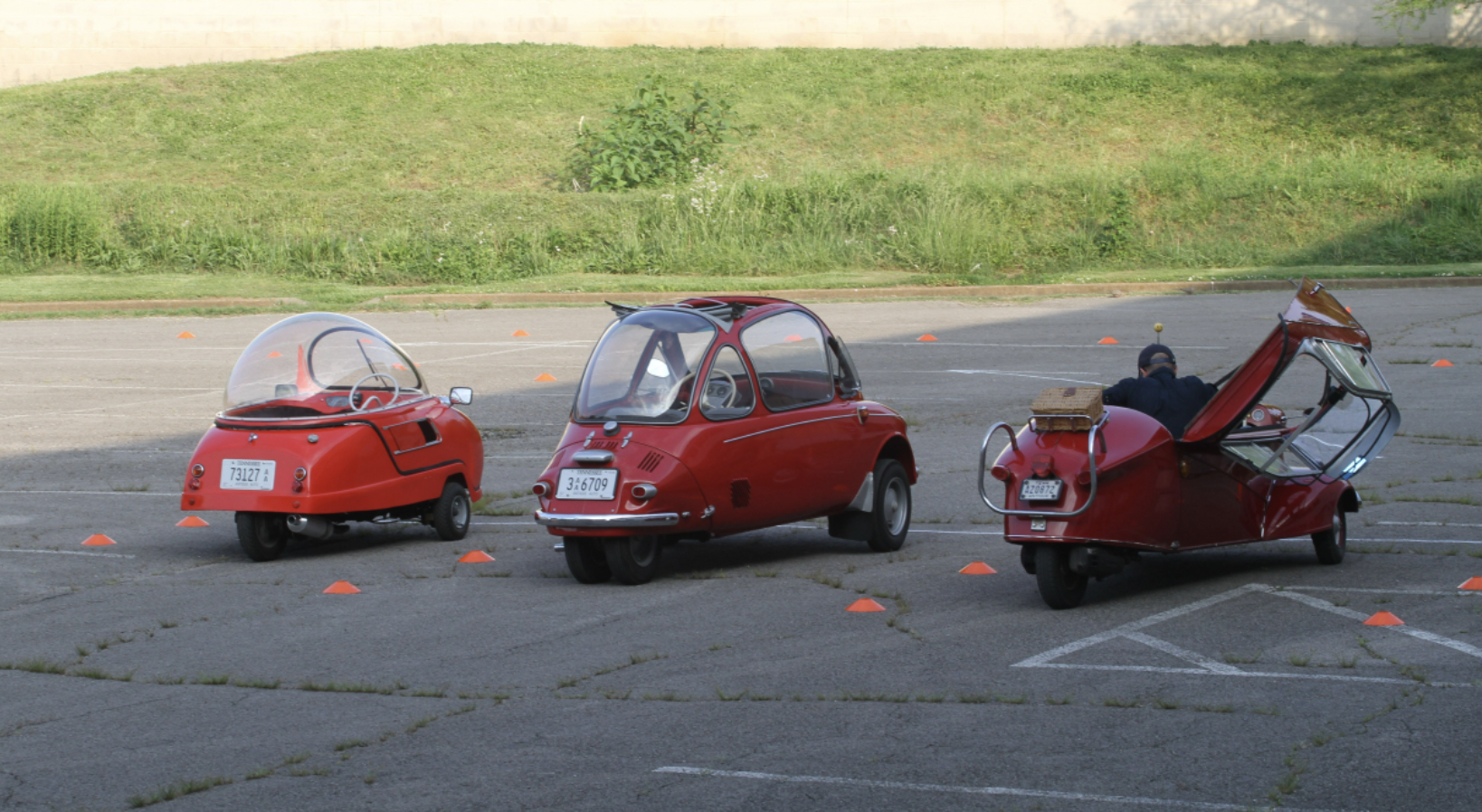 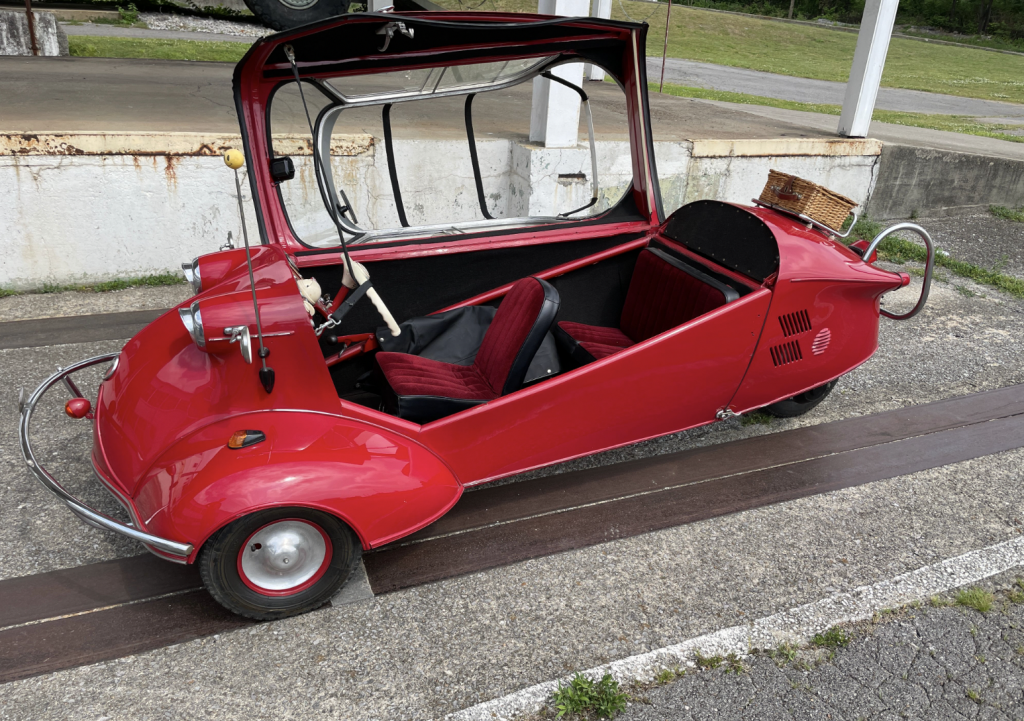 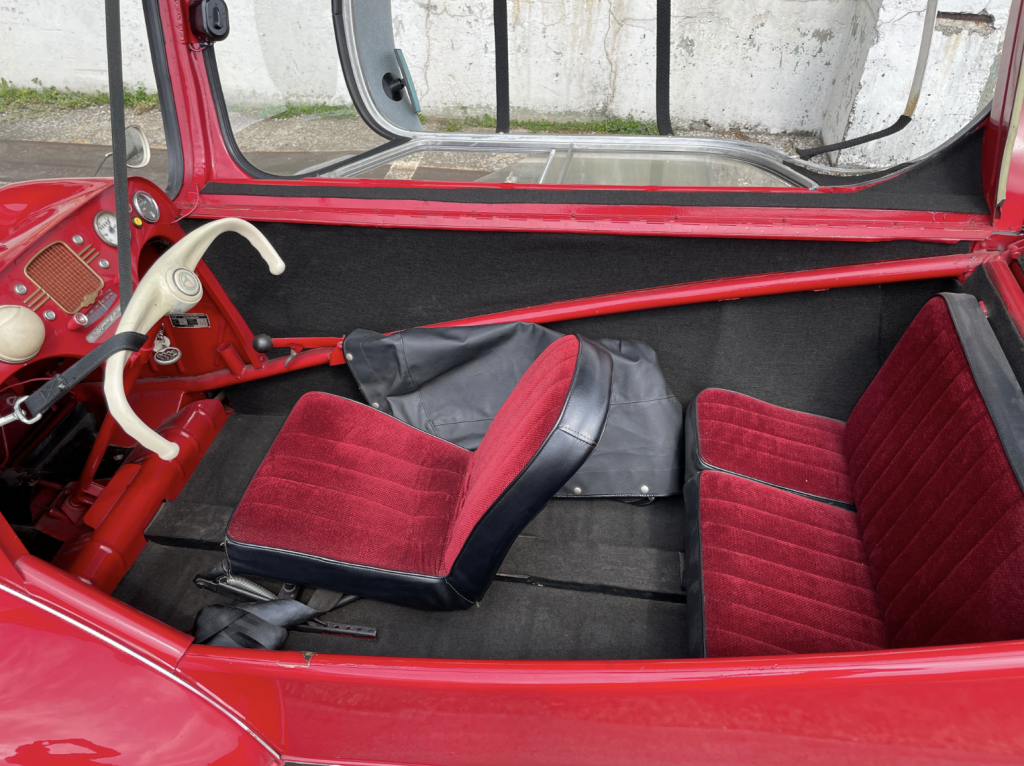 Before I get you all yoke’d up, a bit of background on the Schmitty KR200. In the early 1950s, former Luftwaffe engineer Fritz Fend had developed a two-seat version of his Flitzer, which was a type of car known as an invalid carriage. This unfortunately-named class of vehicle was the mobility scooter of its day: simple single-seaters for folks with disabilities. However, Fritz found that his Flitzer was mostly bought by able-bodied people looking for cheap transportation. Seeking to find a partner to scale up production of his new design, Fritz contacted Willy Messerschmitt, whose company was not allowed to build aircraft in the years following World War II. In 1953, he came to an agreement with Messerschmitt for them to build his vehicles in their factory at Regensburg. The main stipulation of the agreement was that the cars carried the Messerschmitt name, so Fend’s new design was designated the Messerschmitt KR175. The KR200 debuted in 1955, with improved suspension and a new canopy design. It joined a slew of small, cheap microcars that dominated poor, resource-starved post-war Germany. 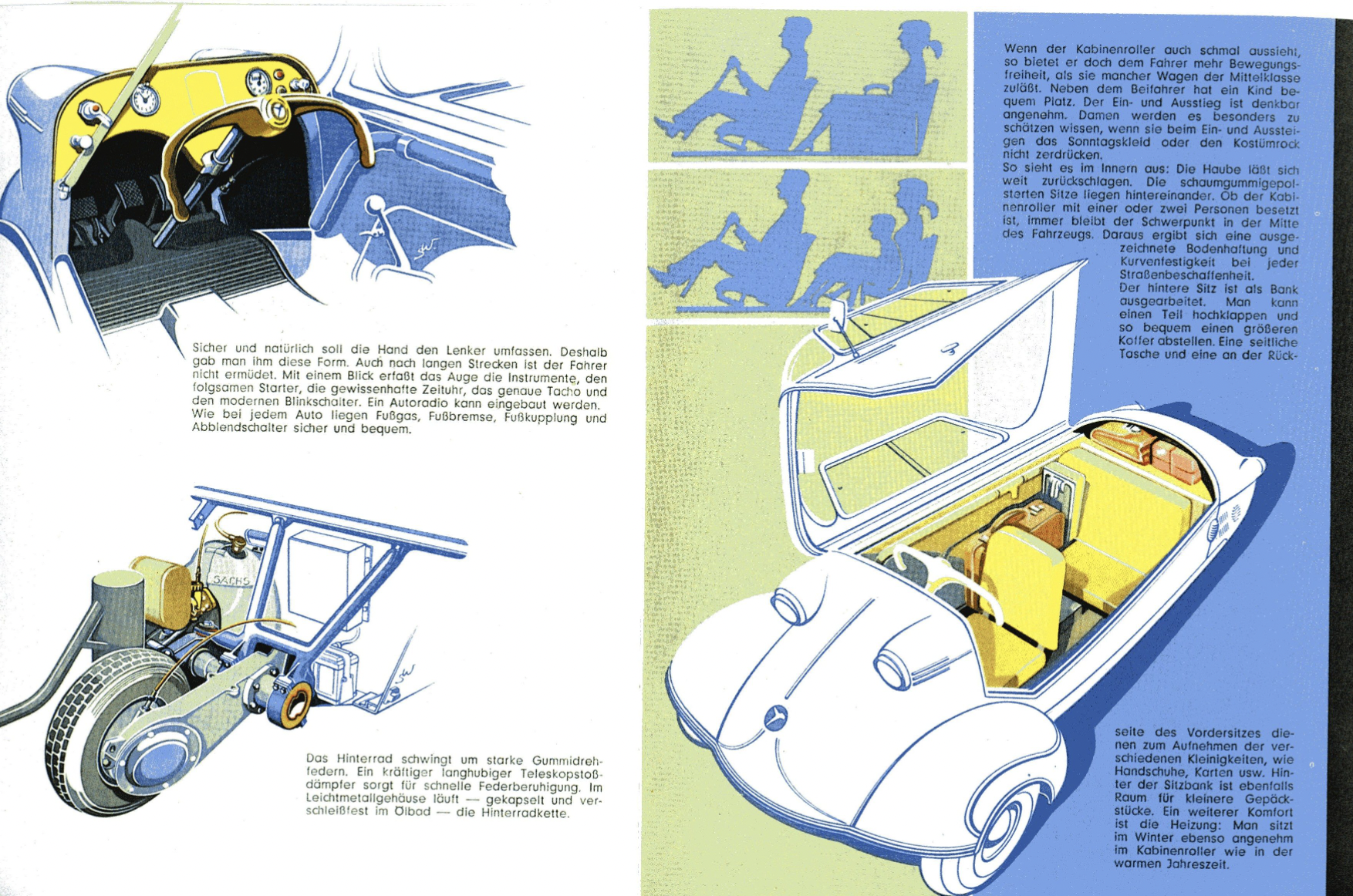 The Flitzer employed a handlebar type steering mechanism, and that was carried over to the Schmitts. The handlebar design was possibly chosen as it might be easier to use for someone that might be missing a limb, but I’d like to think it was selected because most microcars used as many scooter components as possible to keep cost down. 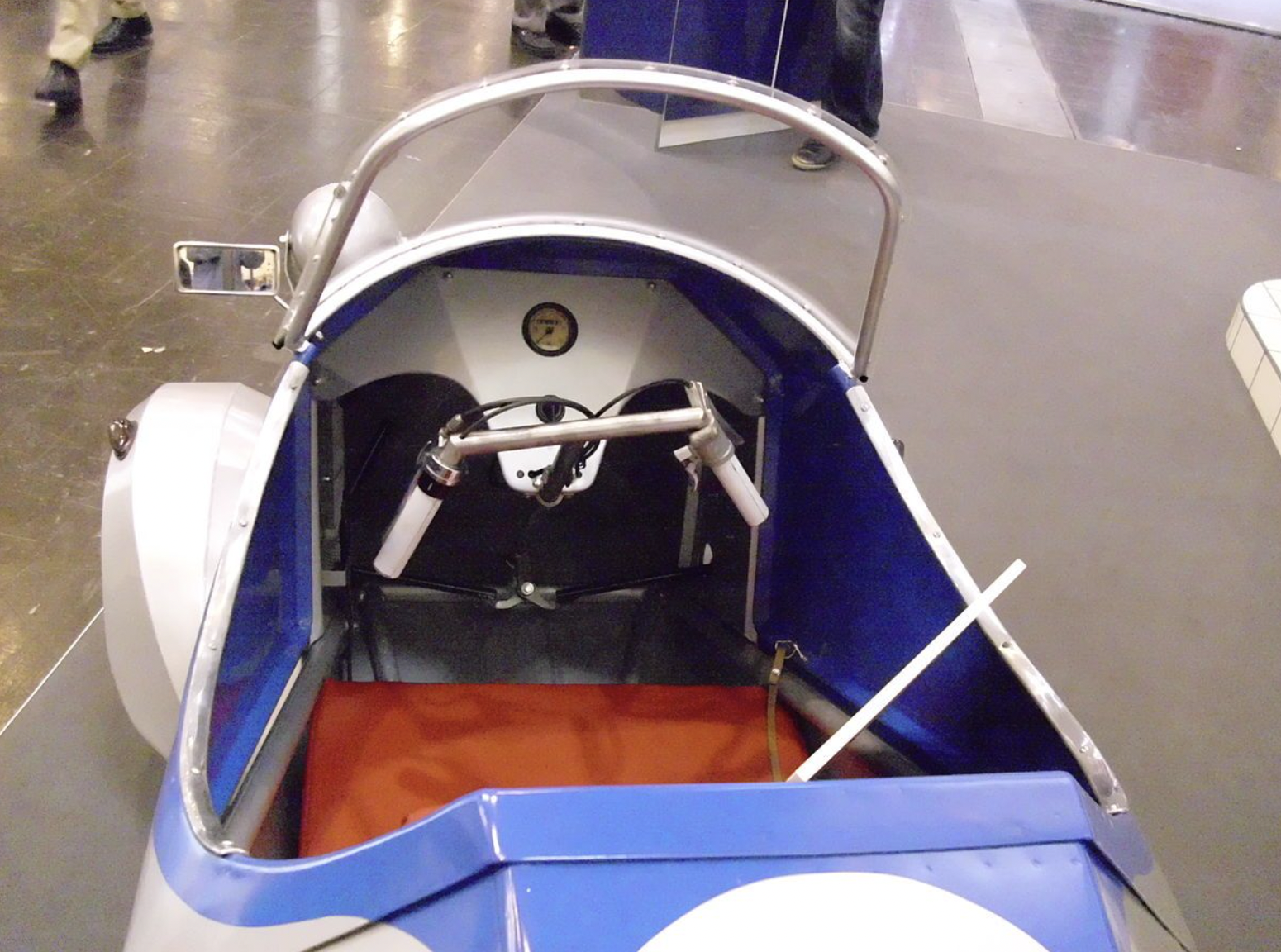 The yoke in the KRs are also a nod to the vehicle’s aviation styling. Airplanes use yokes because full rotation of the controls is limited, and a different direction of movement is needed for vertical control (i.e., pulling up on the stick to gain elevation). Modern single-seat race cars also use yoke-style steering devices, because the cockpits are very cramped and the steering lock-to-lock is limited. 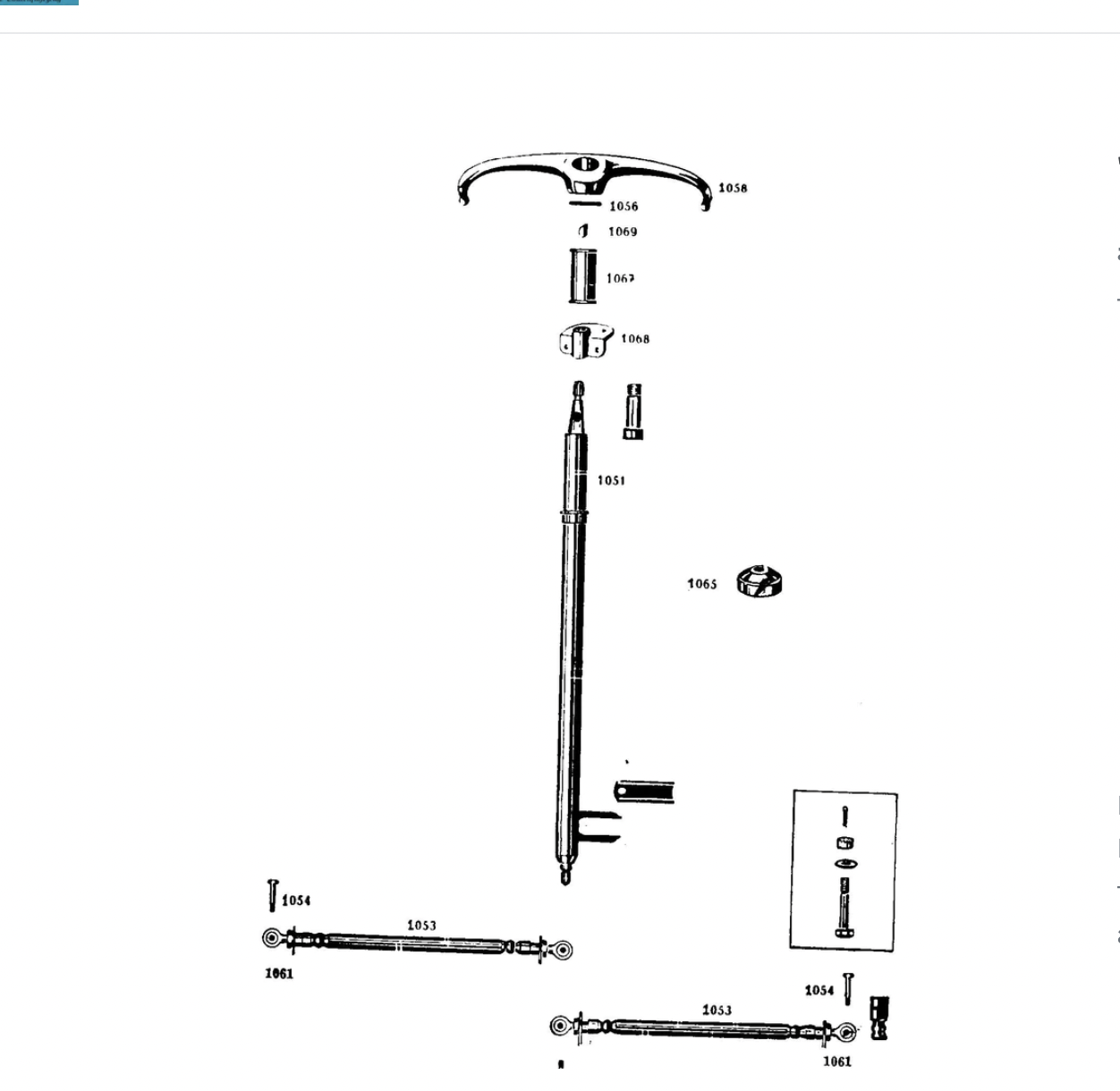 It’s better to think of the yoke in a Messerschmitt as more of a steering bar, as it’s linked directly to the track rods of the front wheels. The driver is actually swiveling the bar on its axis from the horizontal position instead of rotating it, as opposed to rotating a conventional steering wheel, with the help of reduction gearing. The direct linkage and driver’s position over the front wheels makes it feels very responsive to inputs.

[Editor’s Note: Here’s how I interpret this: See the steering yoke in yellow below? Notice how it’s not at a perfect 90 degree angle compared to the steering shaft/column. What this means is that you wouldn’t be “rotating” the bar like you’d think; instead, to get the shaft to rotate, you’d be pushing and pulling the bar in a direction that’s normal (90 degrees) to the shaft so that all of your force is creating a torque that spins that shaft. It’ll look sort of like turning like a typical handle bar, but because the bar is leaning, it’s actually more like pushing and pulling to the driver. That shaft/column that the yoke spins has a little bracket (like the one two images above or here) extending downward (towards the driver) from its base; if you turn right, that bracket will move clockwise (“left”) and if you turn left the column will move the bracket counterclockwise (right).

So steering the “yoke” to the right will move the bracket left; how does this car to the car to the right? Well, the reason that turns the car right is that the track rods (shown above) attached to the bracket are oriented behind the front axle centerline. So if you turn left, the bracket at the base of the steering column moves left, pushes a track rod left, pushing the rear part of the wheel left, rotating that wheel right. The bracket uses the second, right track rod to pull the back part of the right wheel left, turning that wheel to the right. Steering the yoke in the other direction does the same thing, but in the opposite direction. -DT] 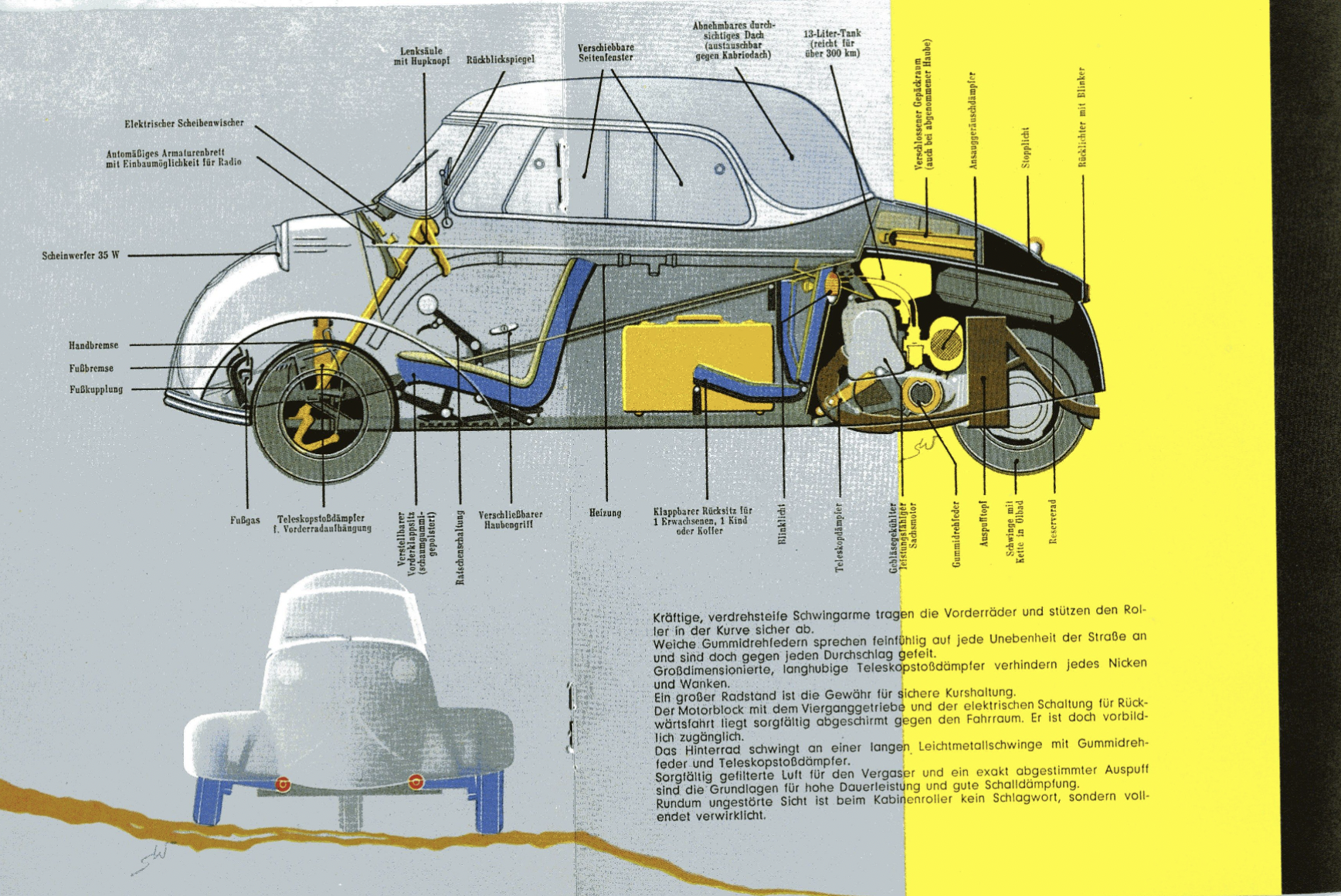 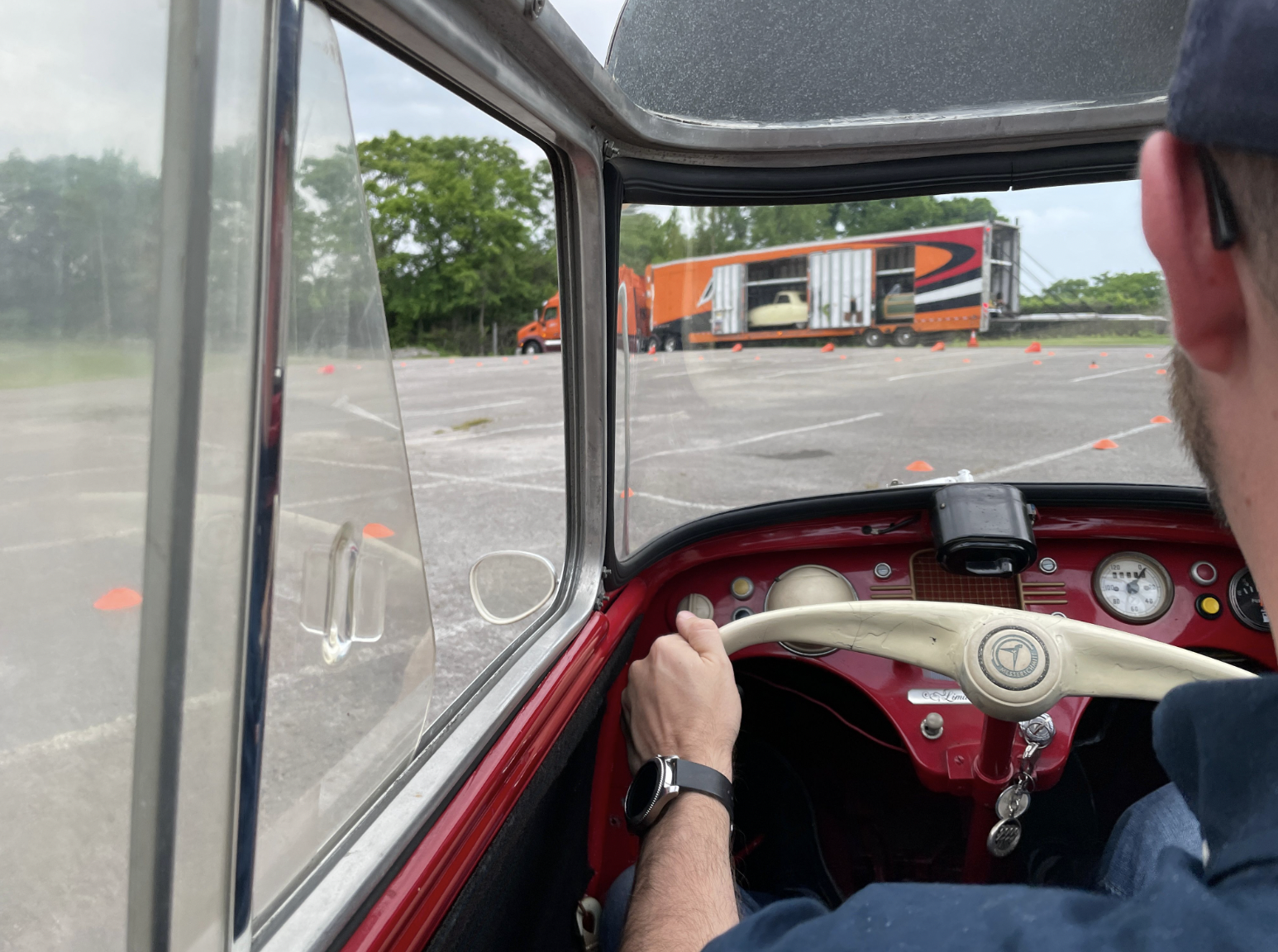 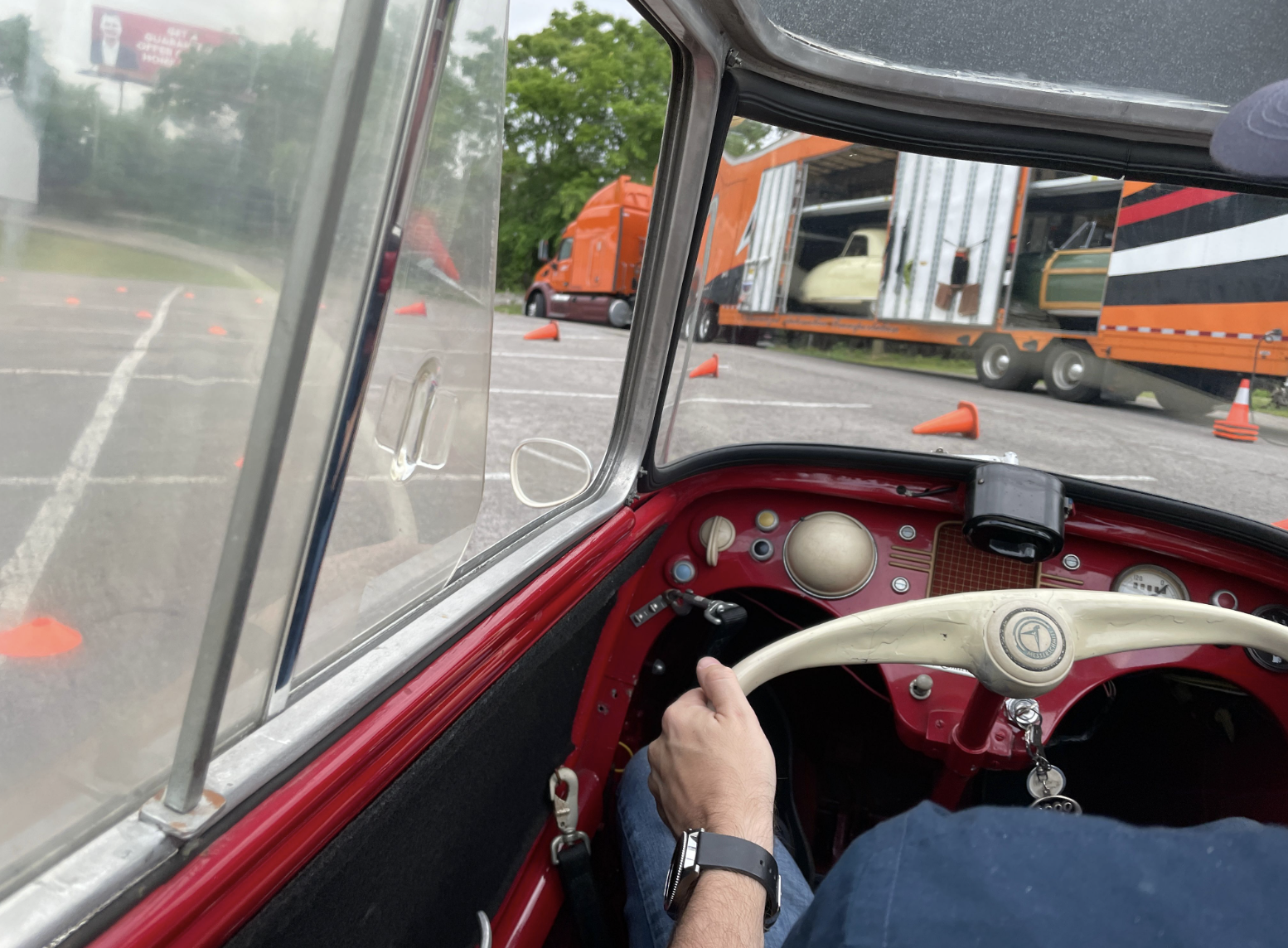 I shot this video from the backseat, with our curator Derek at the helm. Notice the limited travel of the yoke as we make it through the last slalom. My apologies for the shakiness of the video…I’ll talk about the suspension in a minute.

The museum’s KR200 originally had a Fitchel and Sachs air-cooled, single-cylinder, two-stroke engine with four forward gears, but not reverse. It had two sets of contact breaker points, and to get into reverse, the engine was stopped and then restarted, going backwards. That meant that Schmitts were capable of four reverse gears as well, which would require an insane person to drive a three-wheeled, yoked vehicle backwards to reach fourth gear. [Editor’s note: Wait wait wait — to go into reverse, you just fired up the engine so that it rotated BACKWARDS? That’s absolutely incredible. -DT]

Our modified KR200’s engine is now a 125cc Honda CB engine, and thus has no reverse. The CB had a centrifugal clutch, so the clutch pedal has been turned into a dead pedal. A key is used to start it, but we’ve added the yellow button as a kill switch. Currently, the parking brake is disconnected, and there isn’t really a neutral…we use a chock on the rear wheel when parked. 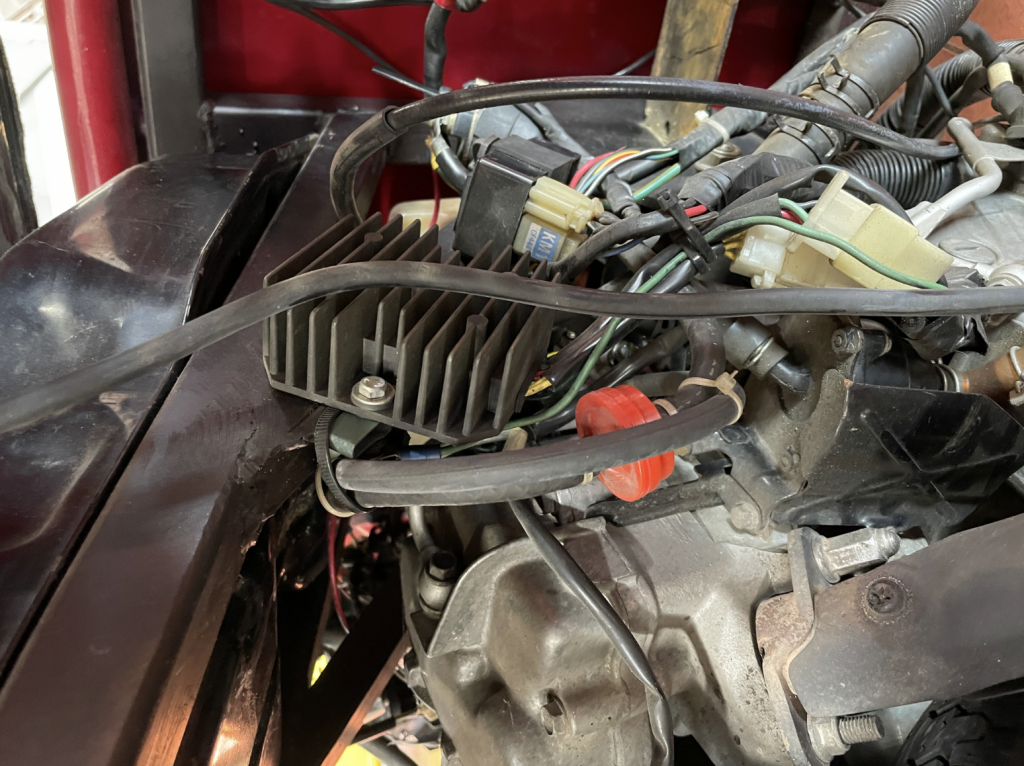 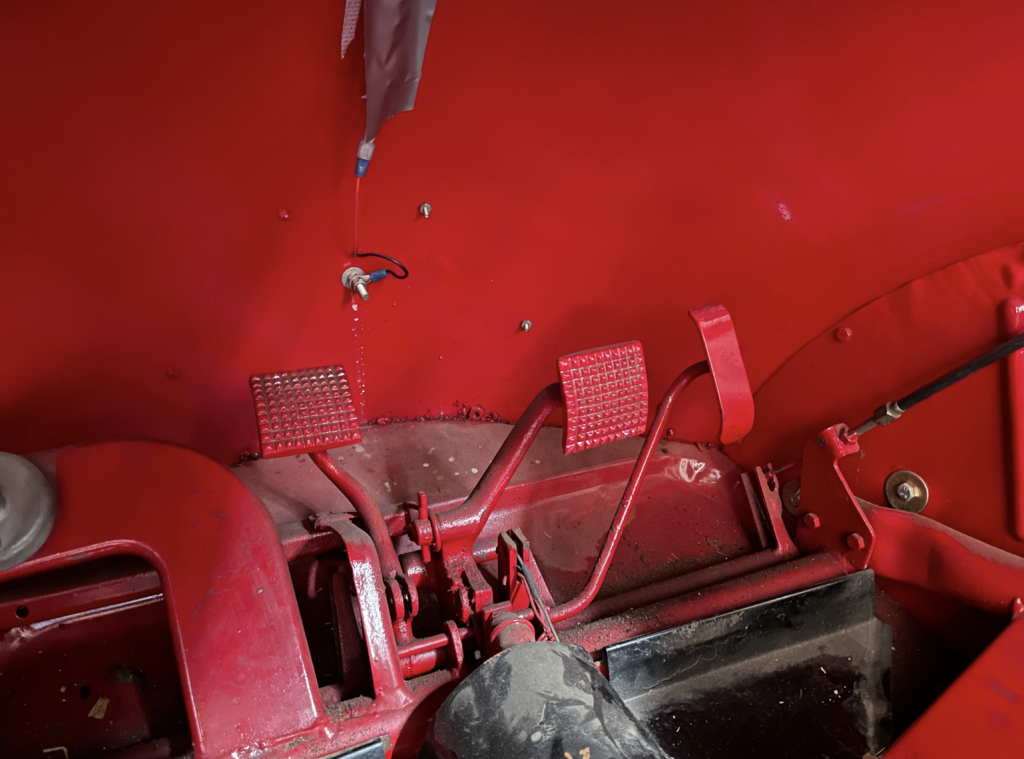 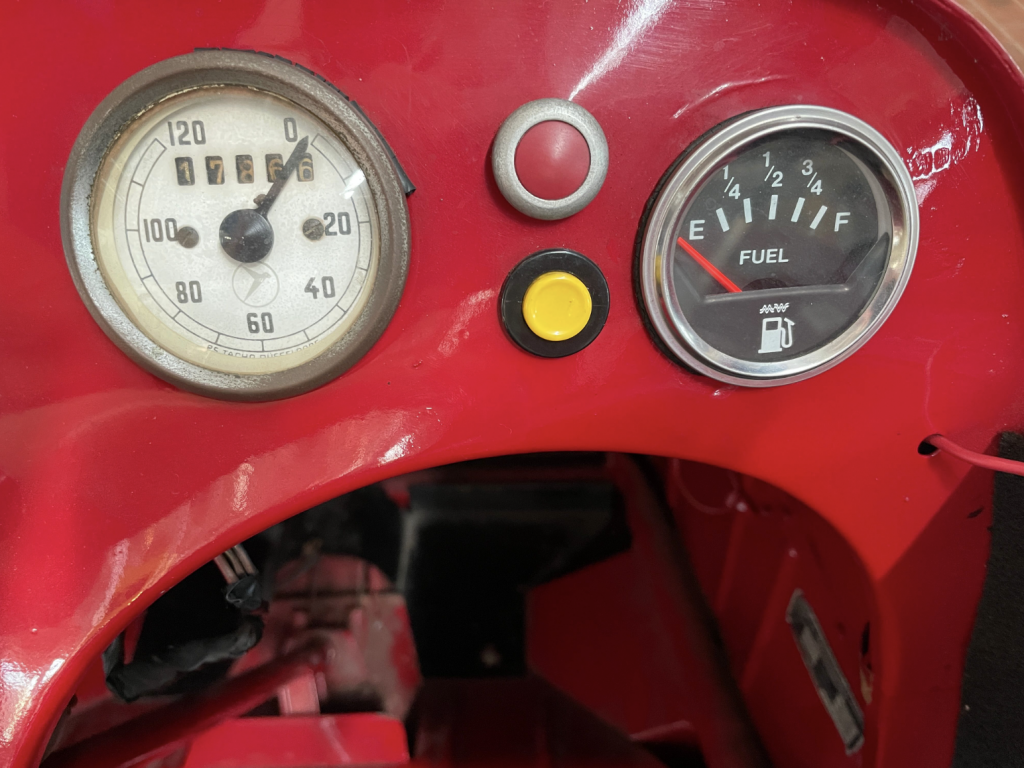 When I drove it around the track, I noticed a clunking sound coming from its rear suspension. It’s also buckboard-wagon rough. We think the bushings need replacement. I think even with new bushings the ride would be pretty rough. 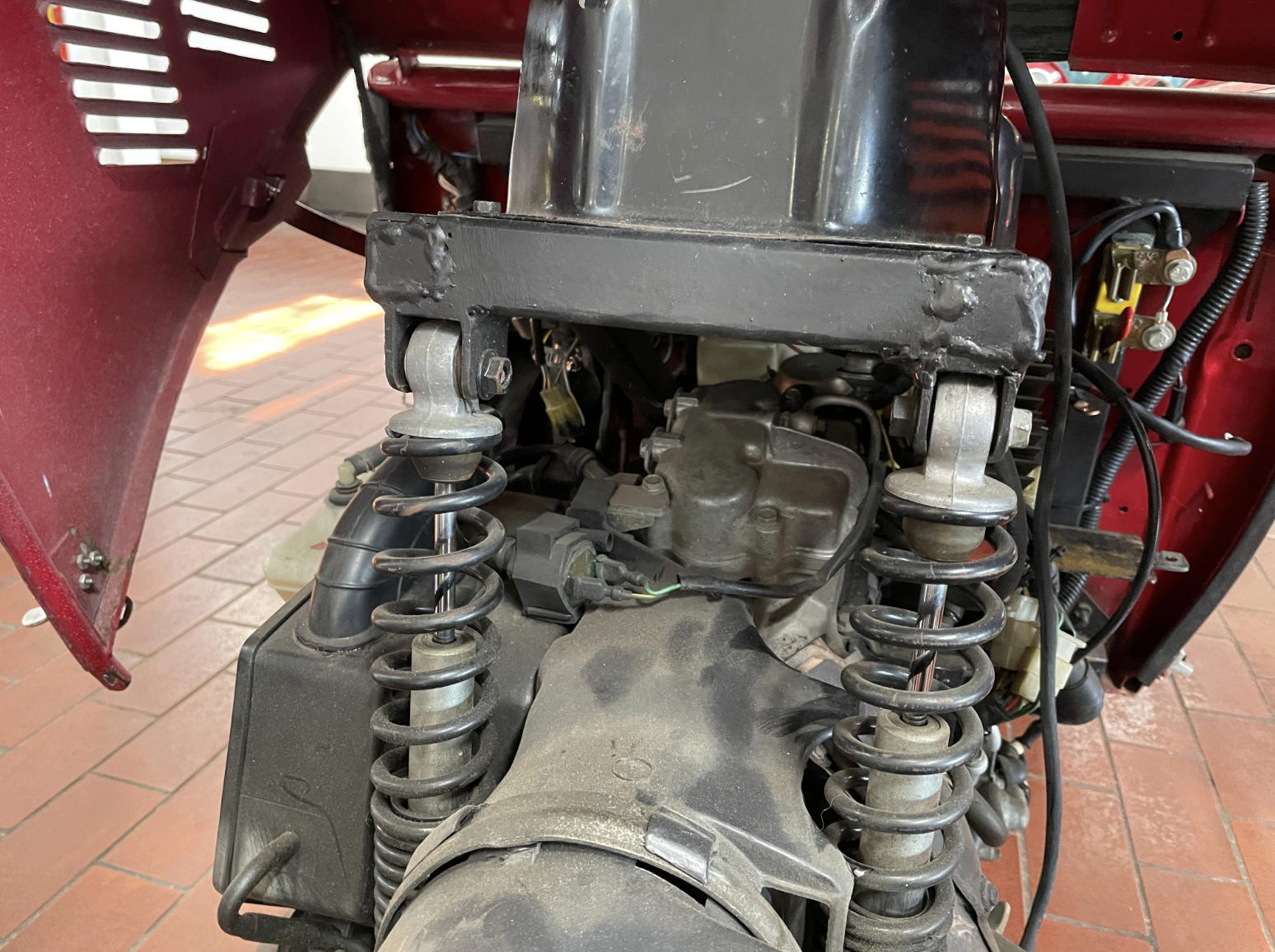 So as manufacturers trot out dumb yoke-style steering systems in the coming years, remember: yokes are useful, but the best application is really limited to three-wheeled, tandem-seat, rear-engined, German microcars.

By the way, this microcar drive is a fun event for our members and for the staff. The Schmitt performed admirably, as did the Peel. The only casualty was the Trojan, whose engine vapor-locked towards the end of the evening. The temperature outside had reached 90⁰F earlier that day, which is rather warm for a spring day in Nashville. 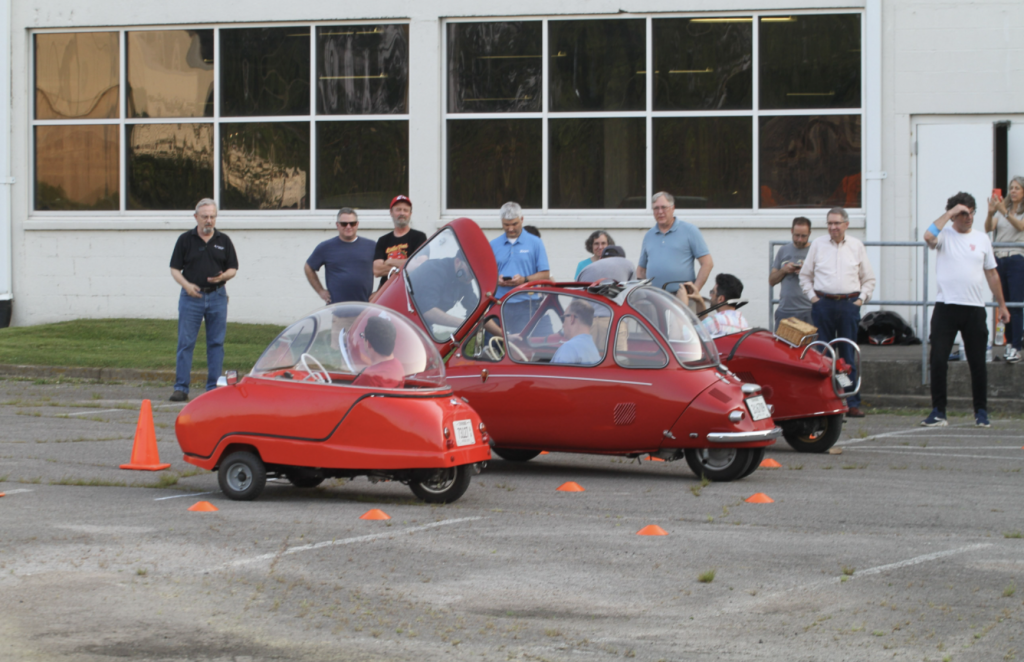 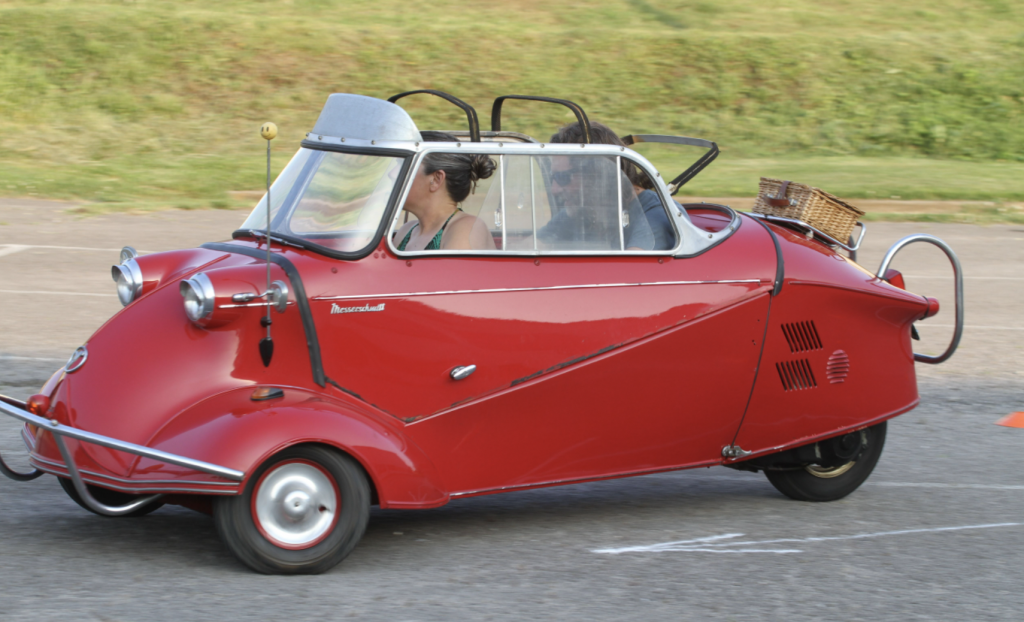 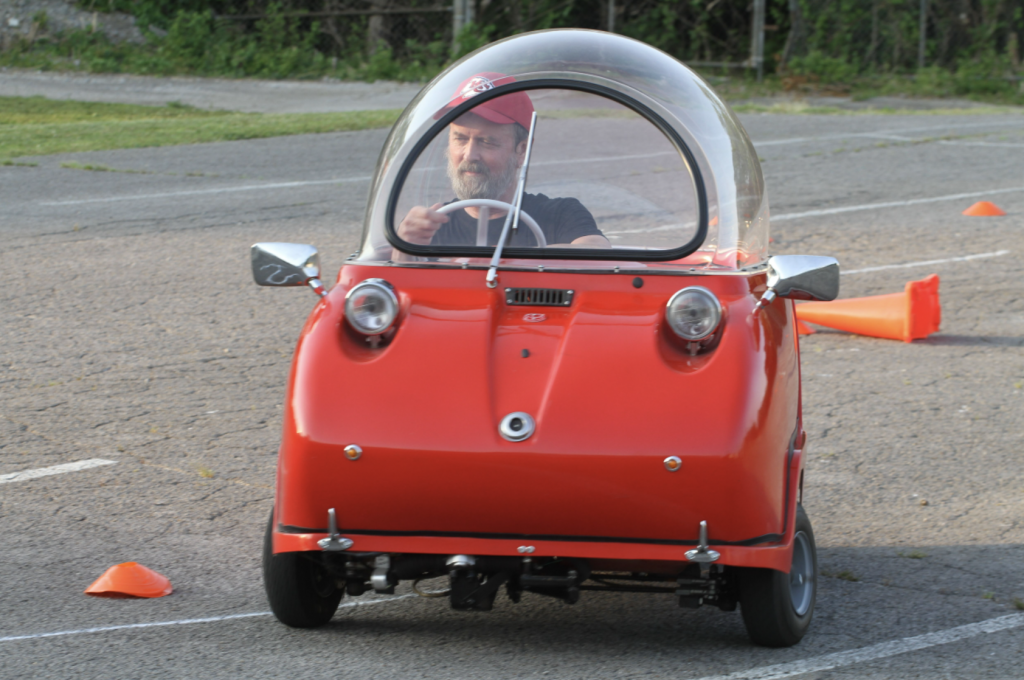 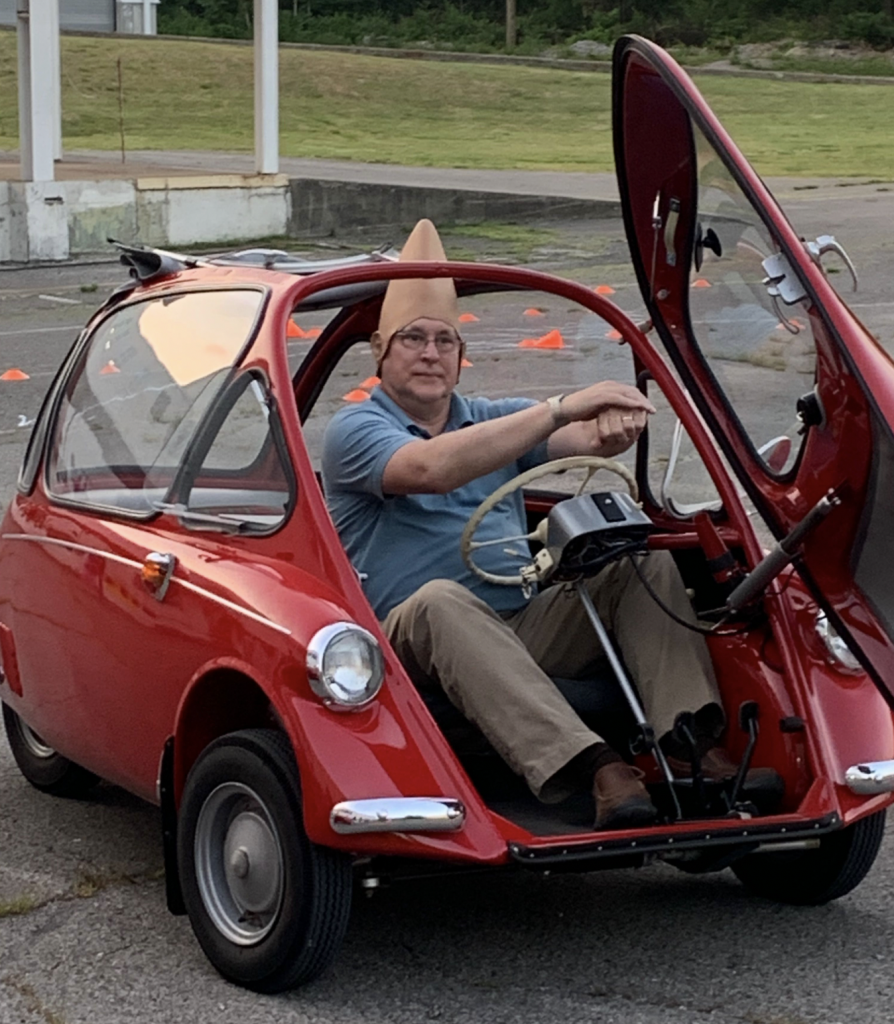 Read All My Posts »
PrevPreviousThe Used Car Market Is Getting Weirder Than A Sword-Swallowing Unicyclist Rolling Up To Applebee’s
NextHere’s What Happened To U.S. Roadway Fatalities After The Pandemic Hit, Per The U.S. GovernmentNext