Automotive Would You Rather: Safety Clown Wig Or Regular ‘Cats’ Viewing? 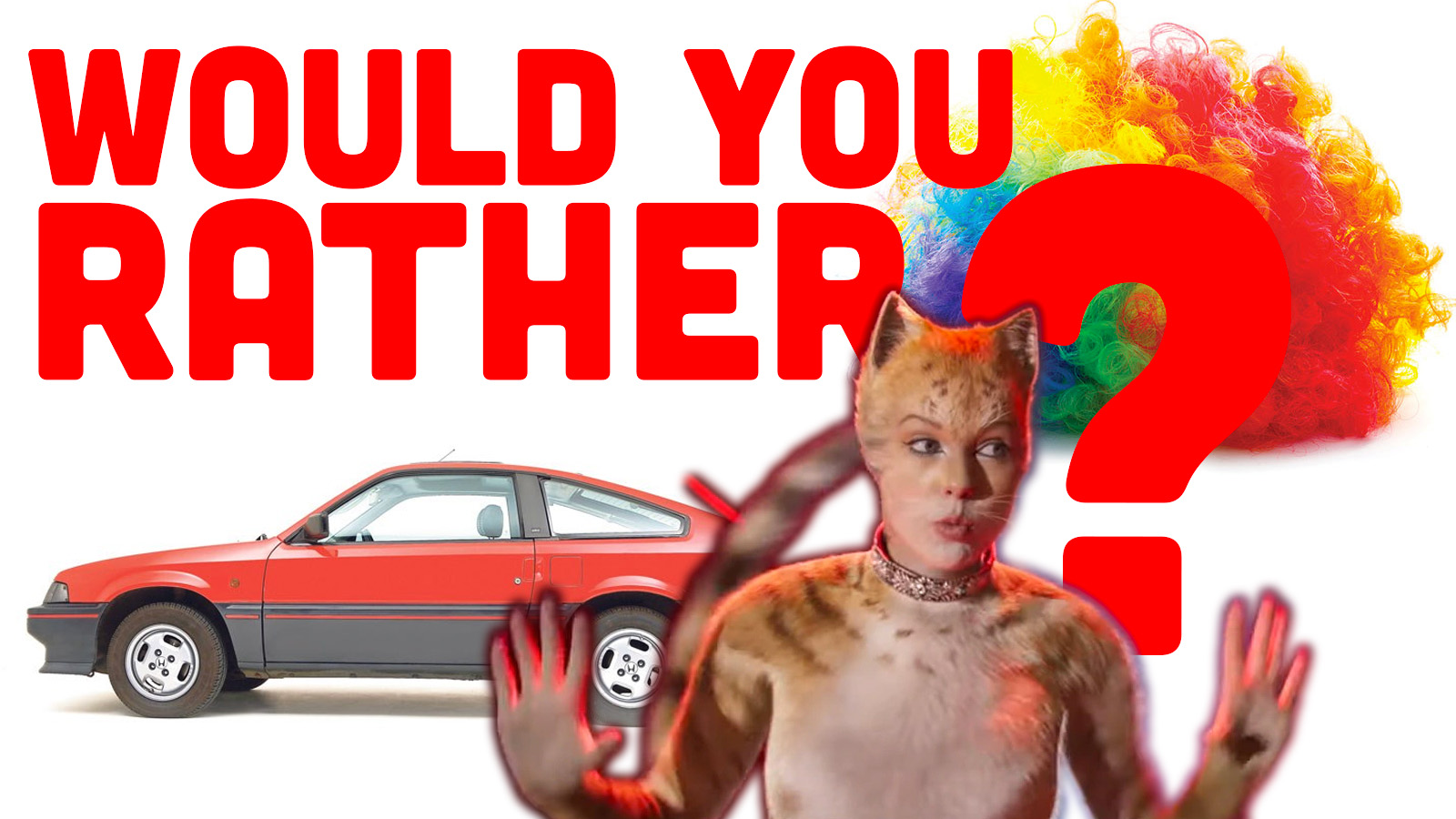 If you’re feeling a sort of ache in your chest, perhaps feeling a bit of a void, a yawning chasm of unfulfilled desire, let me tell you that not only do I understand, but I have the solution. Yes, that’s correct, this is one of those rare cases where some random dipshit on the internet has not only determined what’s ailing you, but is ready and willing to immediately provide the remedy. In this case the problem is that you’ve gone far, far too long without a new edition of The Autopian’s Automotive Would You Rather, and the solution is that you’re reading the latest one right now. Enough waiting! Let’s get to it!

SCENARIO ONE: The Enchanted Clown Wig Of Driving Protection

You’re out driving one day, and as you pass by an alley, you catch a horrific scene out of the corner of your eye: what appears to be a man, prone on the ground, covered by squirrels and pigeons that are savaging him brutally. You skid to a halt and bolt to the man’s aid, sending bloody-mouthed squirrels and dripping-talon pigeons scattering.

You drag the figure to safety, and realize with a start that it’s a clown. You choke back the natural revulsion that any well-adjusted human feels when encountering a clown, and do your best to get him cleaned up and dress his many wounds. The clown is very appreciative, and is calming down from the harrowing experience.

“You have done me an incredible service, my friend,” the tall, gaunt clown tells you, shifting so his huge shoes are no longer alarmingly close to your groin.

“My people and the Squirelo-Pigeonic Alliance have been at war for centuries,” the clown continued, as though that statement made any sense. “I’m Scrambles, Vizier to the Great Crown Clown King Slappy III, and I’m in an unusually good position to reward you for your heroism. I have with me many ancient Clownian artifacts, including the Enchanted Clown Wig of Driving Protection.”

The clown pulls a damp rainbow wig from his fanny pack and places it on your head. It smells like a beer died by crashing a plane full of Circus Peanuts into a wet dog the size of an Econoline.

“This wig has a special, highly specific power: as long as you are wearing it, whatever automobile you are driving can never, ever crash. Not even a fender bender. Nothing. The wig was developed by a special clown R&D division at Volvo, using dark runic magic. The wig was liberated by clown ninjas in the 1970s and has since been used to reward Friends Of Clownian Causes. Which, at this moment, is you.”

The clown then fixes you with a penetrating stare and issues a warning:

“Do not take the power of the Clown Wig of Driving Protection lightly: while it is quite infallible in practice – even driving like a blindfolded moron on an icy won’t end in a wreck – but people will find out and want you to drive them all the time. Governments will try to force you to drive their heads of state, drug kingpins and mafia bosses will try to kidnap you, and all of your most nervous friends will goad you into driving them on every damn road trip, you get it.

This is as much a burden as it is a benefit! Be wary!”

And with that, the clown flung a pellet to the ground and disappeared in a cloud of cotton candy, leaving you alone in the alley, wearing the wig.

You’re delighted to find yourself at The Tail of The Dragon, driving your ratty but beloved Honda CRX up and down the winding road, having a blast. After a few runs you stop at the Iron Works Grill and Pub for some lunch, your mind wandering to all the wonderful cars you’d love to wring out on that road.

While you’re sitting, lost in thought, mouthful of cheeseburger, someone sits down across from you at your table. It’s Tom Hooper, the director of the infamous 2019 flop Cats, the movie based on the long-running Andrew Lloyd Webber musical. In case you forgot, here’s the trailer:

Tom Hooper seizes your arm with surprising strength. He’s been watching you, he tells you, and he appreciates what he sees. He can tell that, like him, you’re a genuine gearhead, and he can also tell that you have driving desires that far outstrip your limited means. But he has an idea.

You see, he wants a gearhead friend, but, more specifically, a gearhead friend he can watch Cats with at least twice a month, and then be told how amazing the movie was, and how he, Tom Hooper, was robbed of the accolades and adoration he clearly deserved.

If you agree to be Tom Hooper’s gearhead friend, and watch Cats every other week with him, gushing about how much you love it, then Tom will buy you whatever car you want. He’ll buy you up to four a year, no questions asked. He has the means to do this (his grandfather invented the idea of coziness and has been raking in royalties on the concept for over a century) and he, as a gearhead himself, is willing to indulge whatever automotive desires you may have with genuine, unmasked enthusiasm.

But, of course, every other weekend you’ll be spending at his mountain house, hours from the nearest city, with no cell or wifi service, watching Cats, over and over. And then you’ll be saying effusive things about it, directly to the man who made it happen. Over and over.

He also wants to show you the butthole cut, which absolutely does exist.

So, what will it be? Absolute automotive safety via rainbow clown wig, or being besties with automotive benefits with the guy responsible for Cats?

I'm a co-founder of the Autopian, the site you're on RIGHT NOW! I'm here to talk to you about taillights until you cry and beg me to stop, which I absolutely will not. Sorry. Hug? Also, David's friend.
Read All My Posts »
PrevPreviousTVR Cerbera Speed Eight, Volkswagen SP-2, BMW Rockster: Mercedes’ Marketplace Madness
NextBelieve It Or Not, Kia Made The Second-Generation Sorento With A Stick: Weird SpecNext