Beetle Battle: Which 1972 VW Super Beetle Is A Better Project?

It’s time once again for Shitbox Showdown! It’s April 25th, which has been described as the perfect date. (All you need is a light jacket). This week, we’re going to look at those marvelous piles of hopes and dreams that too often leave us with broken hearts, skinned knuckles, and empty wallets — project cars.

But before you start working on a project, you need a good daily driver, so let’s see what you chose last week:

It appears the old Volvo 240 has it by a nose over the California Focus. Not a bad choice at all, especially here in Portland, where the Volvo community and many specialty shops stand willing and able to help keep the machine on the road.

Our first pair of projects is in honor of Don Juan de Torchinsky and his wonderful story on Friday about the VW Beetle engine sound (among other subjects). I just happened to have found, practically in my own back yard, a pair of 1972 VW Super Beetles for sale. Let’s see which one is the better choice for sneaking off on a forbidden clandestine romance.

Before we begin, I’d like to give a big thank you to my friend Cas Falkowski for some help with a few particulars on these cars. Cas is a VW nut who has a few old Volkswagens in his fleet, including a ’73 Super Beetle (his first car!) and Subaru-powered Vanagon Riviera pop-top camper.

Let me also add that I am in no way an authority on the Beetle, but I have done my homework as well as I could. It’s entirely possible I’ll get something wrong and Torch will call me out on it, and I’ll end up having to wash his Yugo as penance. But I can’t avoid air-cooled VWs – or Jeeps, for that matter – forever, so here we go. And maybe I’ll feature a pair of MGs someday, and teach these guys a thing or two. 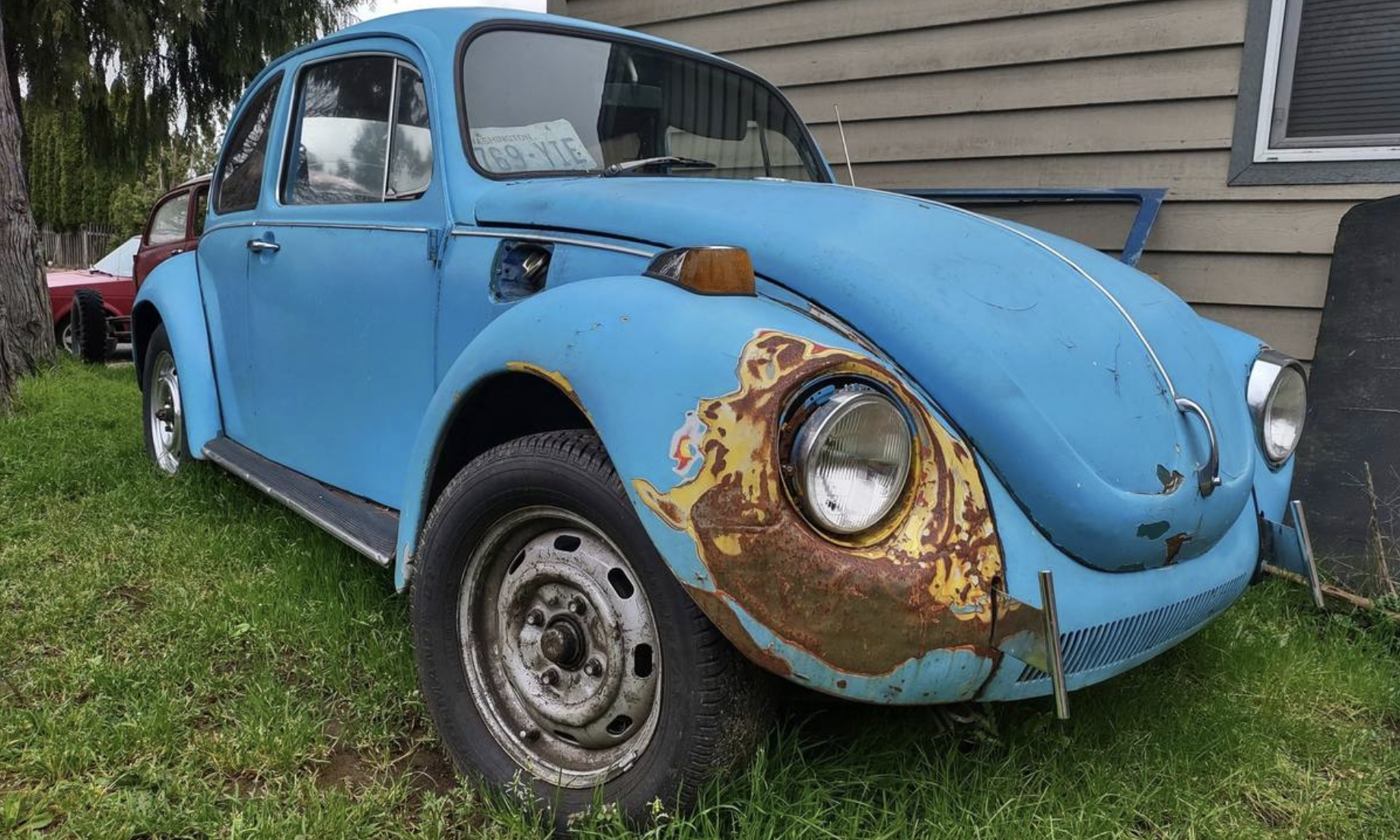 Runs/drives? Runs, but not drivable

Volumes have been written about these cars, of course, but here is the Cliff’s Notes version: By the late ’60s, Volkswagen’s utter dominance over the US small car market was in jeopardy thanks to the increasing popularity and quality of Japanese imports. To keep the venerable Beetle competitive, in 1971 VW introduced the Super Beetle: a tiny bit bigger, with a completely new McPherson strut front suspension in place of the old torsion-bar-and-trailing-arm setup — intended to future-proof the Beetle for a while until the more modern Rabbit came along. 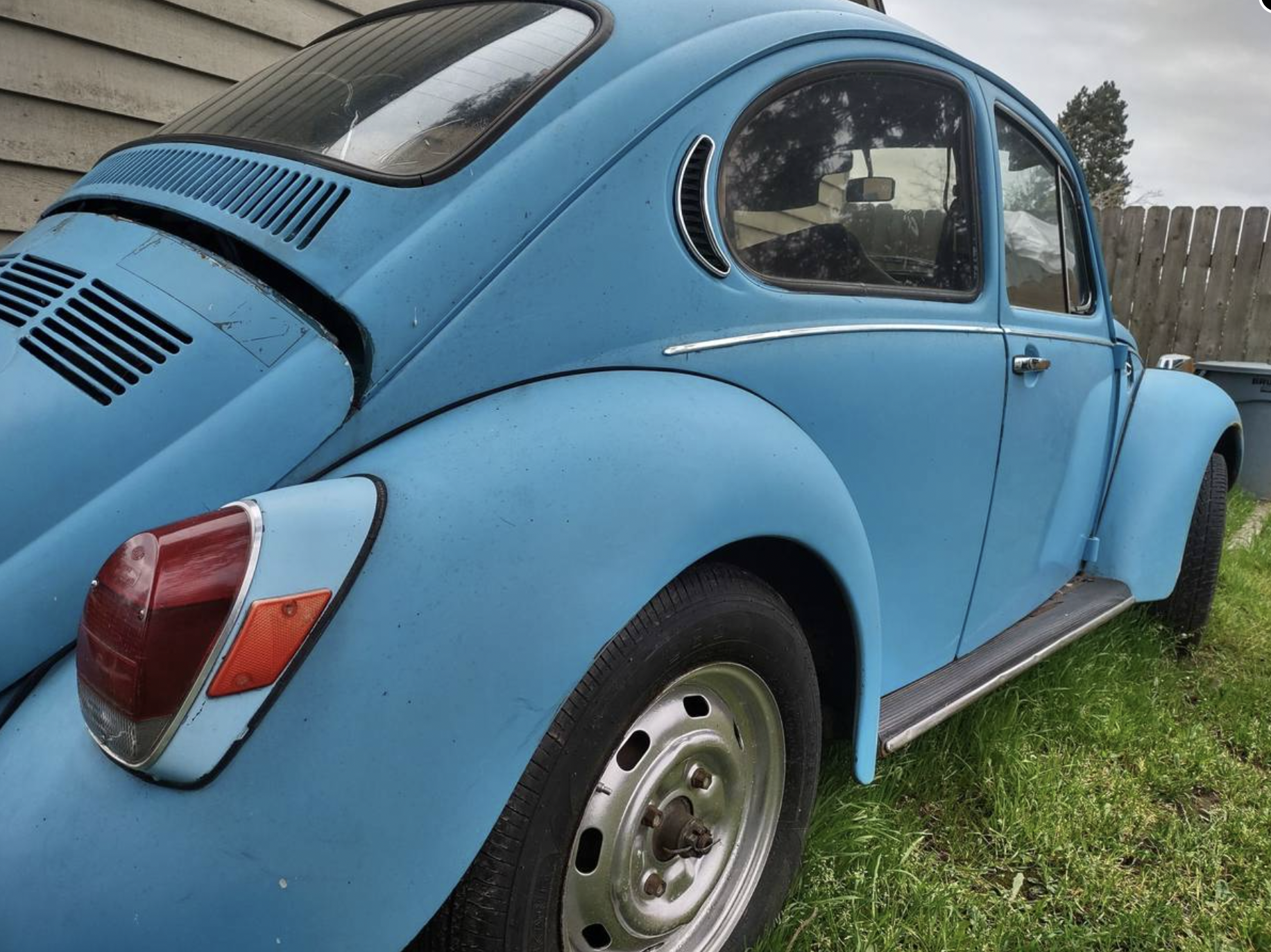 This example is said to have originally been a one-year-only shade of blue called Gentian Blue, which according to my research was also known as Enzian Blue [Editor’s note: For the first time ever, I’m going to possibly teach Mark a fun-fact: Enzian is a beautiful alpine flower found in Germany (where I happened to grow up), among other parts of Europe. The American named “Gentian Blue” is a reference to the English name for the Enzian, the “stemless gentian.” -DT], though I don’t know what the point of calling out the original color is when the car has clearly been repainted, and probably more than once.  You can see a little bit of the original blue on the firewall and in the trunk. 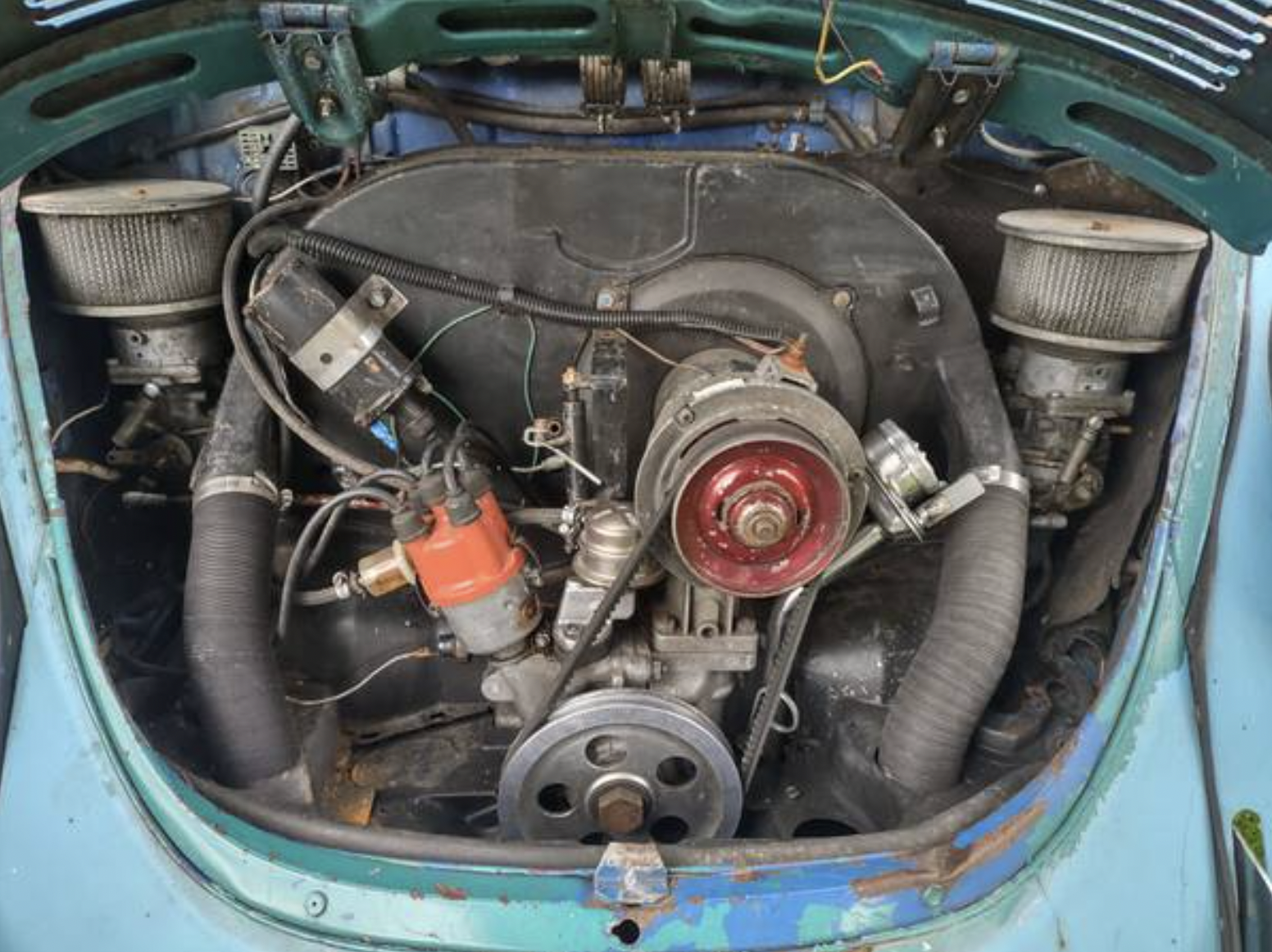 Mechanically, it’s all there, and almost drivable; according to the seller it runs but needs the fuel lines replaced in order to be driven safely. It has a hot-rodded engine of unknown displacement, with dual carbs and some other go-fast goodies. It has had a lot of little detail parts replaced that you may not give much thought to until you actually dive into a project: window seals, a carpet kit, and a new dash pad (though the latter two are not installed yet). 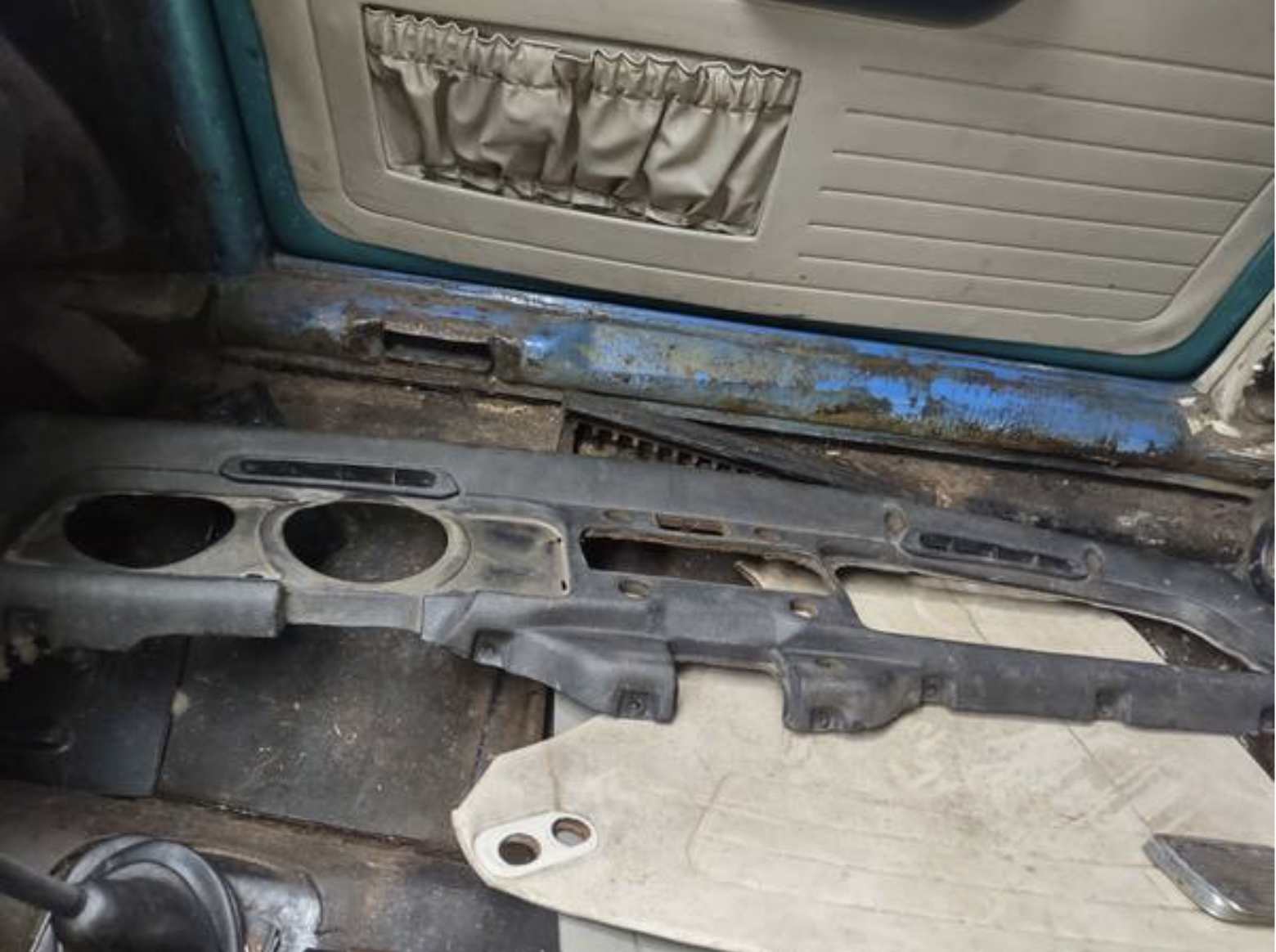 It’s also rust-free except for one damaged front fender, being an example of that mythical species of beast known as a “California car,” which usually, but not always, exempts a car from corrosion. This one looks pretty good, and has the potential to look a lot better without much work. 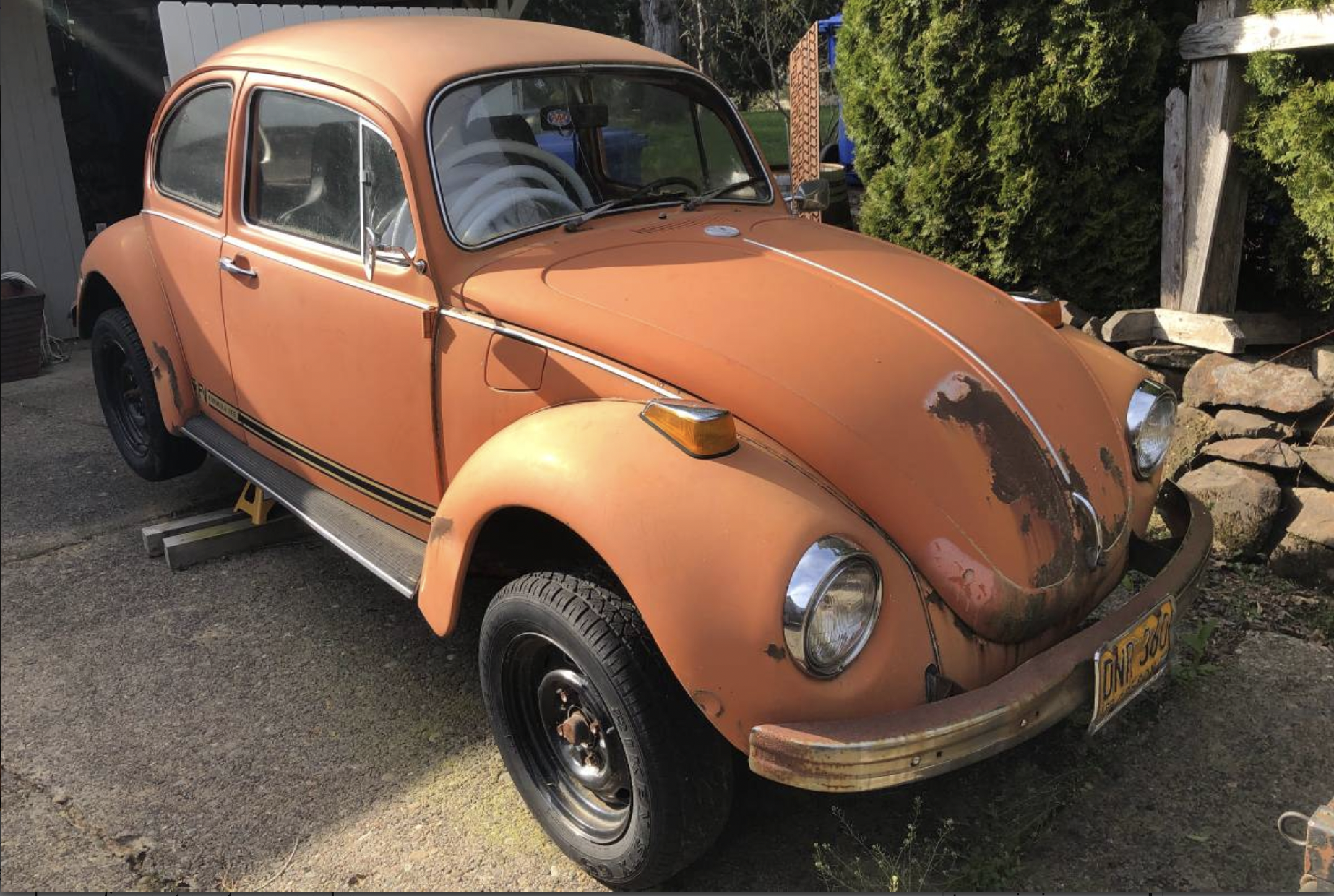 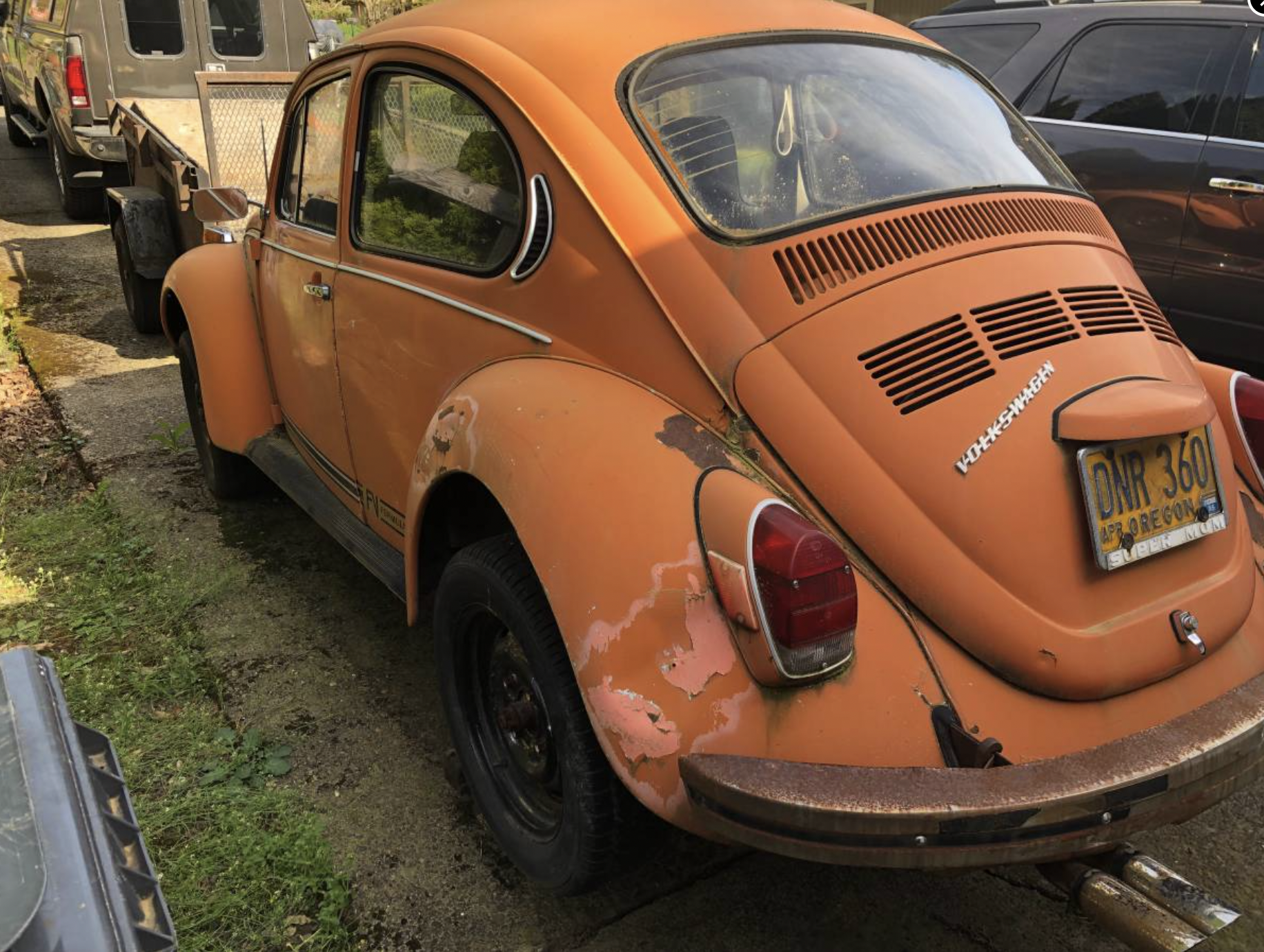 I need to preface this one by saying I am only reasonably sure it is a Super Beetle and not a standard Beetle. Spotting the difference from the outside is a lot harder on the 1971-72 Super models, which had the same flat windshield and dashboard as a standard Beetle. In 1973, the Super gained a curved windshield and a more modern dashboard, which makes them easy to spot. But based on the shape of the front end, I’m pretty sure this is a Super, and I’m absolutely sure Jason will yell at me if I’m wrong.

What is certain is that it has the Formula Vee appearance package. Like so many “Special Editions” from VW and others, this is really just stripes and a few cool accessories intended to jazz up an otherwise ordinary economy car. At least this one has some racing heritage: Formula Vee is a low-cost racing series using single-seat race cars based on VW Beetle mechanicals. It dates back to 1963 and is still going strong today. 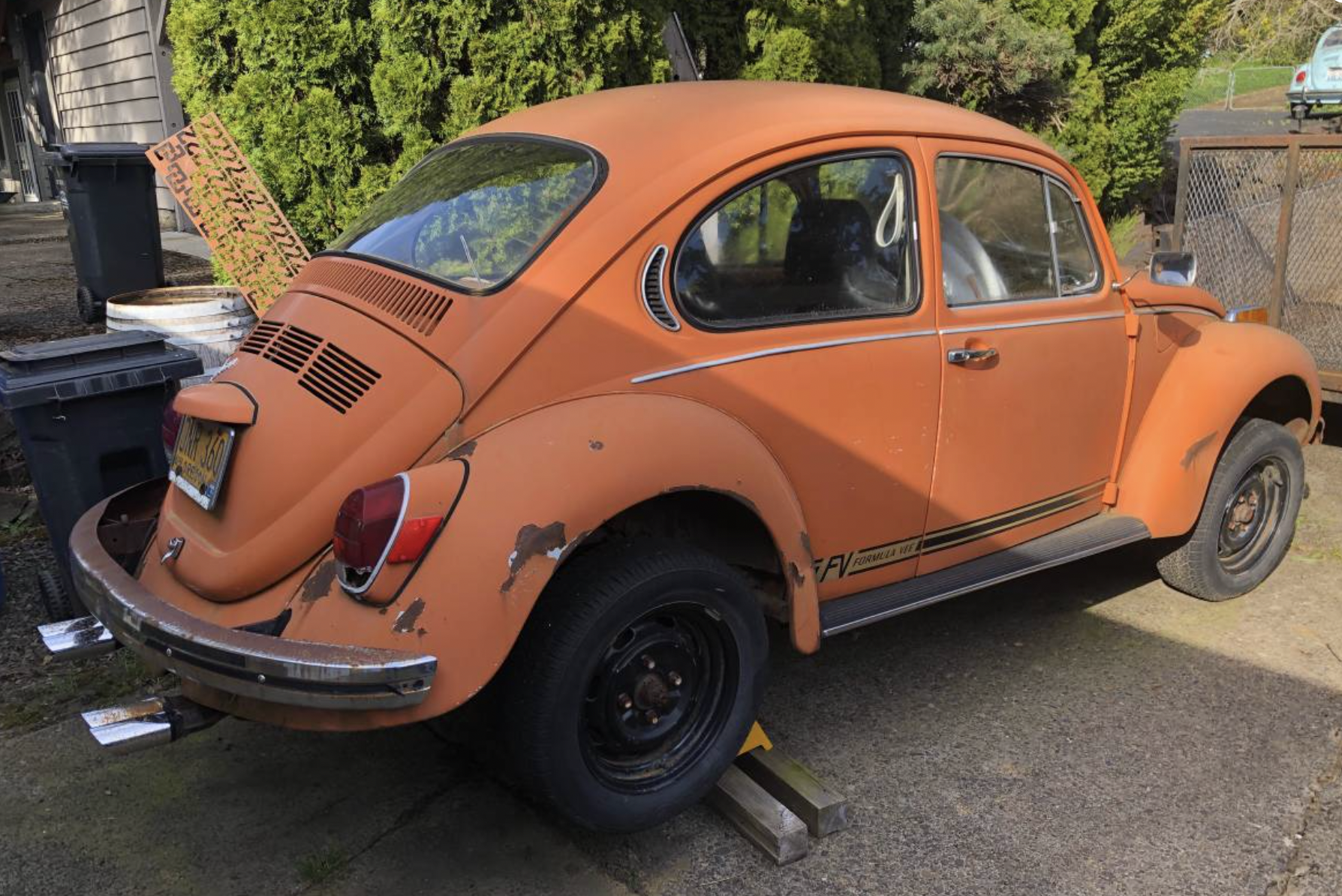 The Formula Vee package also helps its teenage-rebellion cred: a yellow FV Beetle was Kevin Bacon’s ride in the 1983 movie Footloose. (But in typical Hollywood fashion, more than one car was used, and in some scenes the car has Formula Vee stripes, and in others just plain black stripes. Is anybody else annoyed by continuity errors like that?). Exactly what it is about bad boys in Beetles that attracts the good girls is a subject that may warrant further study. 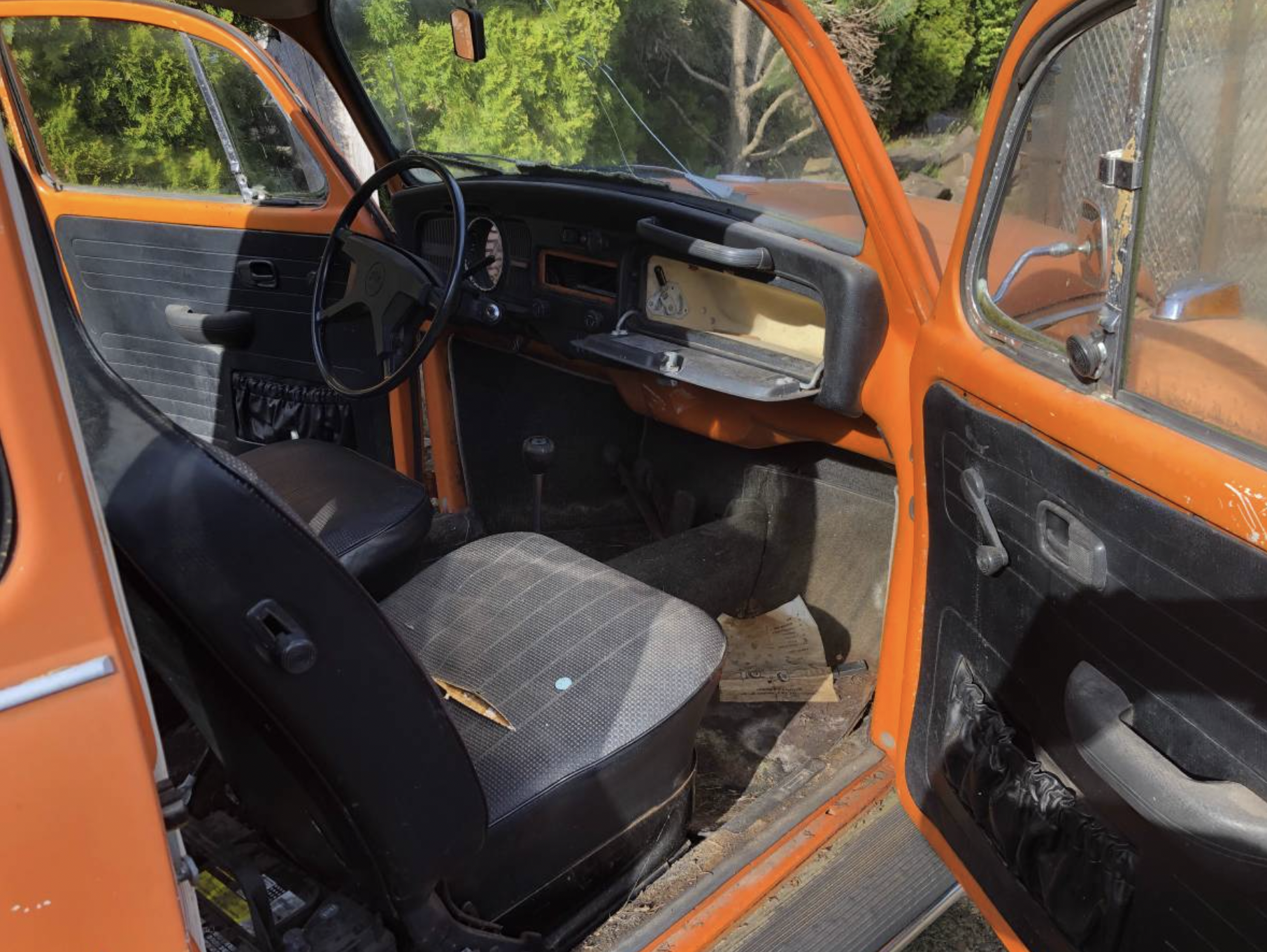 This Beetle looks a bit more original than the blue one, but also a bit rougher; I’d say we’re into “barn-find” territory here. It doesn’t run, and the fuel tank has been removed for inspection, but the seller says it’s odor- and mouse-free, which is a plus, and the interior doesn’t look half bad either. Aside from a few dings, it doesn’t look too rusty, and actually, the chalky paint and patina are kinda cool as-is. There’s not much information given about it mechanically, but Beetles are simple creatures, and there is no shortage of parts available to get it going again.

So there they are, two old Bug projects, one a bit further along than the other, but also a bit more expensive. Which one is a better starting point is now up to you to decide.

Read All My Posts »
PrevPreviousCold Start: “Outside Sources”
NextHow To Fix The Controversial New BMW 7 Series: Our Secret Car Designer Breaks It DownNext