British Carmaker BMC Was Once So Cheap It Would Just Retouch Old Brochure Photos For New Models. Other Automakers Did The Same; Here’s How

Photo retouching in the days before Photoshop was really very much an art, and while there were things like “electric retouching machines,” the work was closer to being a painter than some sort of technician. I suppose in many ways this is still true, but our equipment is vastly better. Knowing the skills required and difficulty of the task just makes what I’m about to show you all the more fascinating: The British Motor Corporation (BMC) would use re-touched photos extensively in brochures, even for entirely new models of cars.

I was turned on to these by Irish fan of British motoring history, Andrew, who runs The Car Factoids twitter feed and who provided me with these fascinating examples of cars that may be the best examples of this. Those cars include the BMC ADO16, known as the BMC 1100 and 1300, and the more upmarket BMC 1800 “Landcrab.”

Almost every carmaker retouched brochure photos to some degree or another, that’s not what’s interesting here. What’s unusual is the degree to which BMC did it, re-working photos of one model of car into an updated model, something that seems to be very unusual for a major automaker.

[Editor’s Note: I reached out to seasoned automotive photographer Mike Nykoruk (he’s shot a lot of images for the Big Three starting in the 1980s), who told me that what you see here was actually fairly common. “I shot a 1991/92 Chrysler Minivan, and they reused it every year until they changed the body style,” he told me. “They would just shoot the grille, strip it into the picture…They would pay me every year for usage of the photo.”

The “reuse fee,” he told me was less than what it would cost an automaker to commission out a new set of photographs. “It can rack up really quickly to try to duplicate a picture that they love,” he told me.

“Sometimes they don’t even pay the photographer again,” he said, though “In Detroit, with the big three, it was pretty much established that you couldn’t just do that.”

How did this work, even? Well, when things went digital in the 1990s, it meant taking lots of photos of wheels, grilles, headlights, taillights or whatever the automaker wanted changed (Nykoruk said he used a “lazy susan” — basically a turntable), and then grafting those photos — taken at precisely the right angle — into the original picture.

“When I shot the Buick LeSabre…they would reuse the photo, and they would bring the same car and just have me shoot the grille. And it was a grille-strip instead of the whole car,” he said.

But back in the day, things were more complex.

“In order for them to retouch, they would have to make a very high quality die sub-print, which itself would cost seven or eight hundred bucks, then an artist would paint the new thing on the actual print, and then they’d rephotograph it to make the actual picture. So it was a very complex process, but it was still cheaper to pay hte photographer, pay the artist, make the prints, re-do it then it was to go out and shoot a new picture,” Nykoruk told me.

Typically they would make a die print. It’s three layers of black and white film. They’d expose it. They’d shoot one of them through a red filter, one through a blue filter, one through a green filter, then soak them in cyan, magenta, and yellow dies. And then they’d lay them down on a piece of paper in registration, and then the yellow would go down, the cyan would go down, the magenta would go down; you’d peel that up, and it was like perfect color — if it was good. That’s why it cost so much money. Then they’d take the print and they’d cut out a grille and [an airbrush artist would] paint in a new grille. Sometimes they’d paint it right on top and rephotograph the print.

These prints would be 16 by 20 or 20 by 24 — really big — and they’d reduce them down to eight by 10, and you couldn’t tell…they’d blow up the picture, they’d paint on there, and then when they reduced it down you couldn’t tell. It looked real. That’s the way it used to be.

Let’s look at some examples, because, again, they’re amazing: 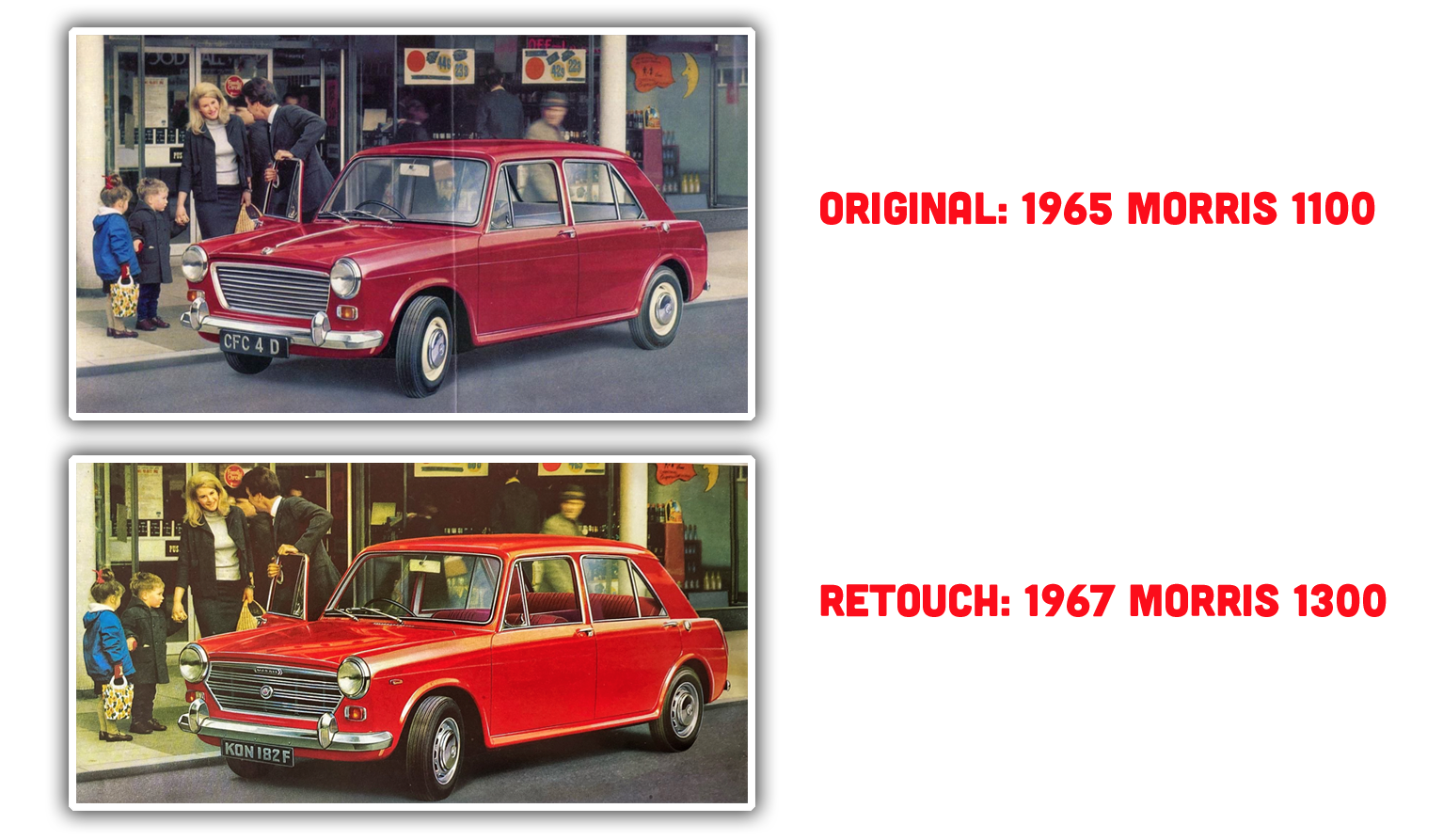 BMC was a master – or maybe abuser – of brand engineering, so the basic car you see here, was sold as an Austin, MG, Morris, Riley, Vanden Plas, and Wolseley. This clever transverse-engine, FWD machine was like a grown-up Mini and was Britian’s best selling car for much of the 1960s.

And yet despite all that success, BMC still cheaped out by re-using a two-year-old photo of the Morris 1100 for the updated Morris 1300.

Whoever retouched the photo did a fantastic job at it, extensively re-working the grille, wheels, license plate, adding marker lamps, and other little details. It seems ridiculous that all this work was considered easier than just doing a new photo shoot, but Andrew offered another likely possibility: BMC may not have had any new cars ready to actually shoot.

Brochures were like the company’s website is today, but, being physically printed and distributed, took longer to be made available. So, if BMC wanted brochures ready when the cars were debuted, they weren’t always able to have cars to photograph early enough to get brochures printed, hence the skillful madness you see there. 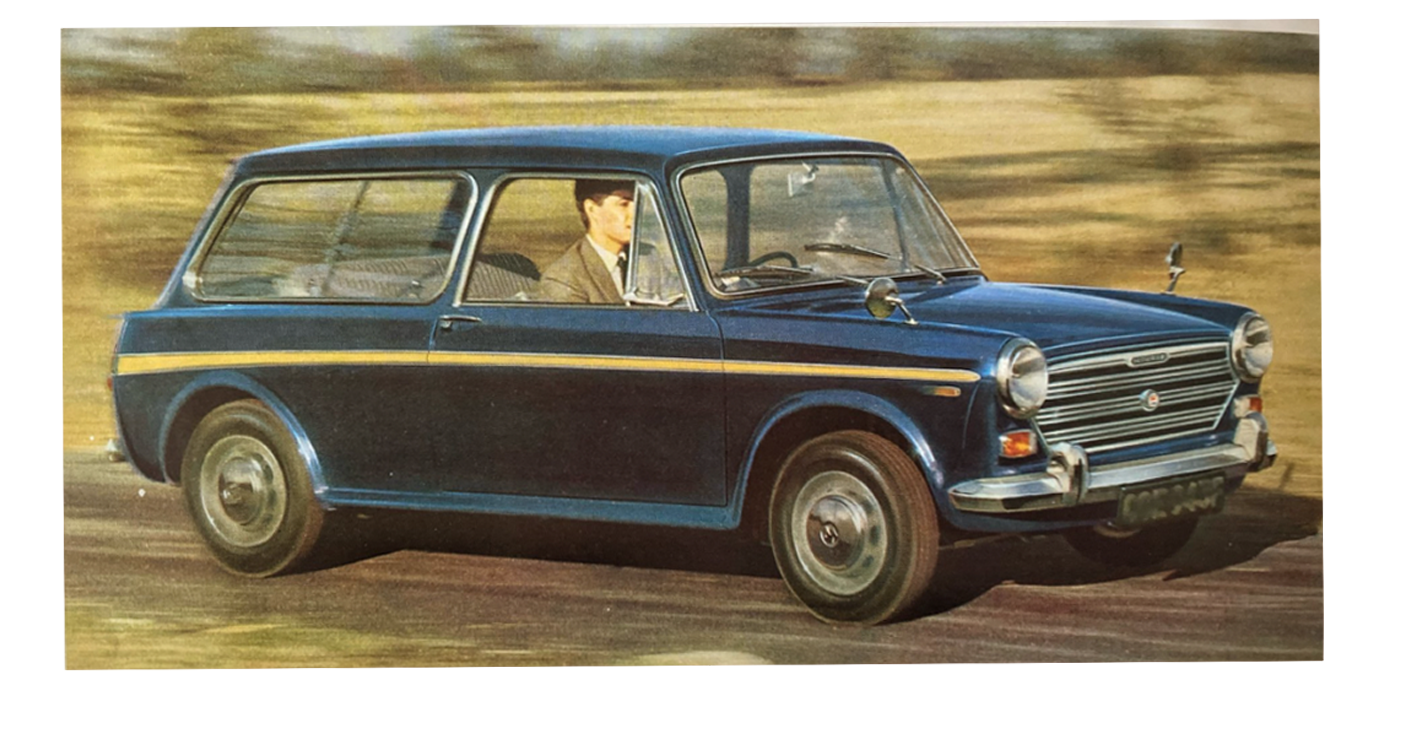 Okay, sure, the smudged-out license plate is kind of lazy, but look at those new wheels, kicky new side stripe, and again marker lamps, new grille, hood, badging, and more.

The BMC 1800 got similar extensive re-touchings as it went from Mk I to Mk II: 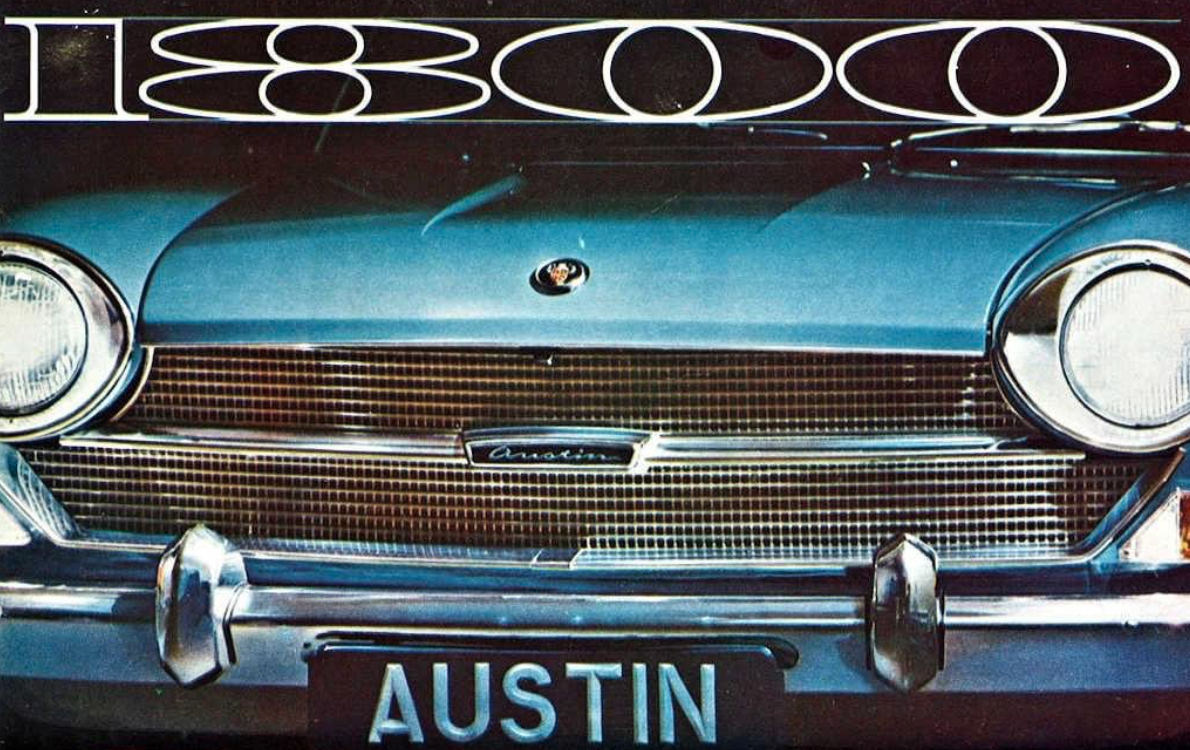 Here we see the Mk I, with its fine mesh grille. And next: 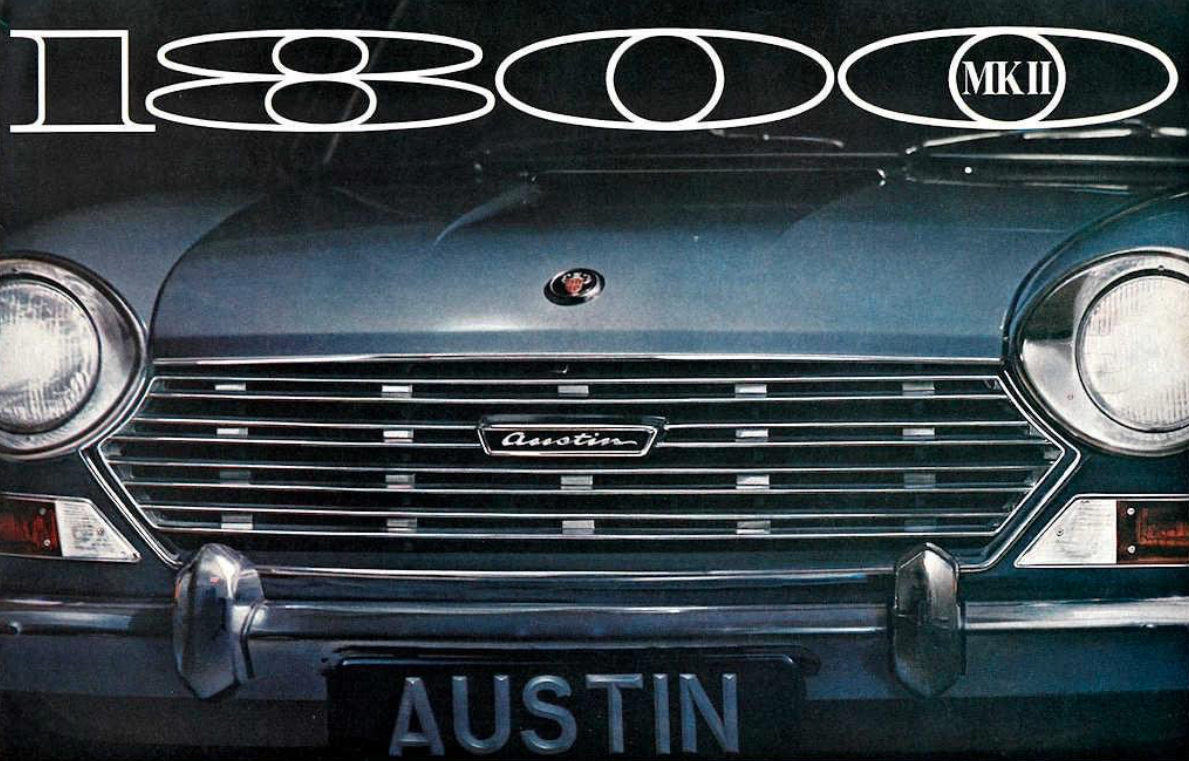 There’s so much I don’t understand about what’s going on here. I’m assured this is a re-touch of the first photo, and it very much seems to be (check out the matching reflection patterns in the headlamp bezels), but the extent of the re-touching is significant. The whole grille! The turn indicators!

Were these elements just drawn in, or were there photographs taken and parts collaged together? If that was the case, why wasn’t a new photo just taken? Perhaps to preserve the overall layout and design? 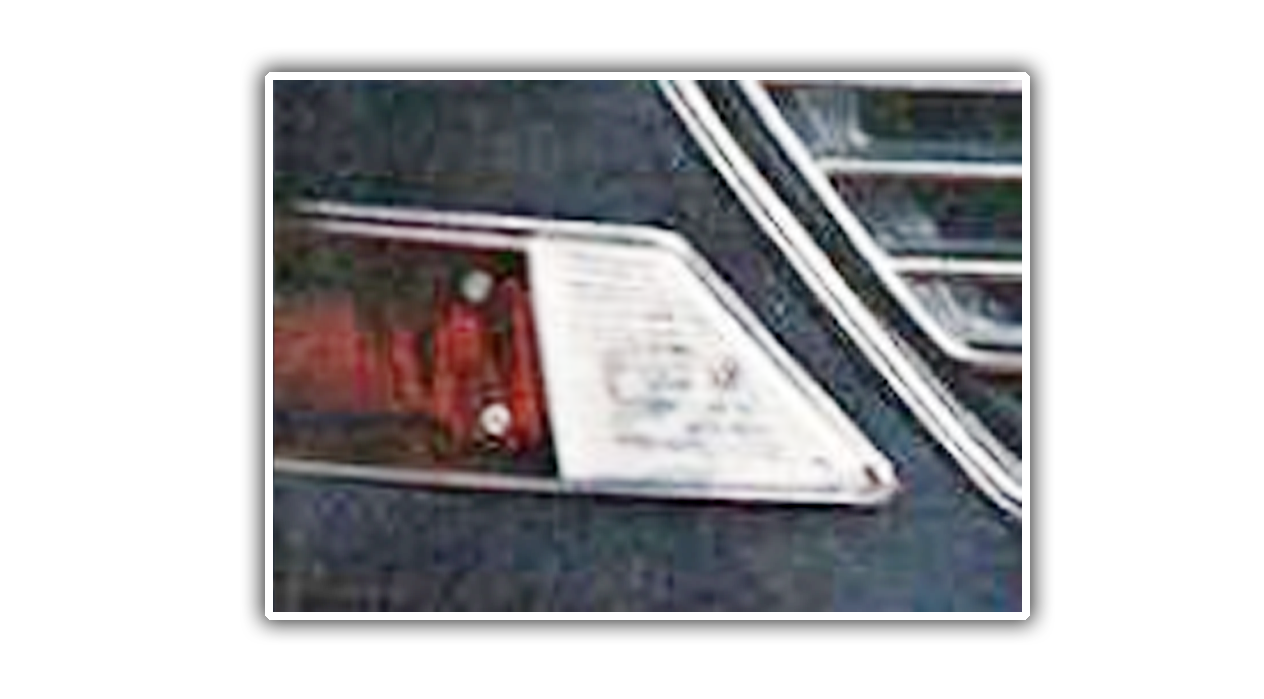 Maybe I can sense some evidence of hand-painting on the indicator/sidelamp light here, but holy crap, is this skillful.

We get a similarly extensive re-working on these brochures for the Mk I and Mk II Morris Monaco re-badged version: 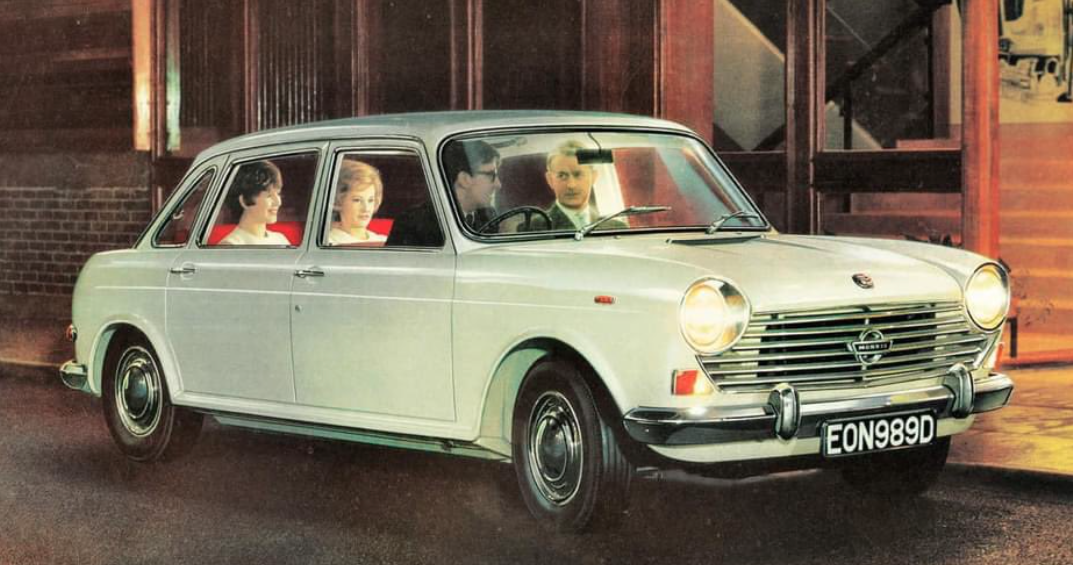 That’s the Mk I, with the strangely glowing people inside, and here’s the facelifted Mk II: 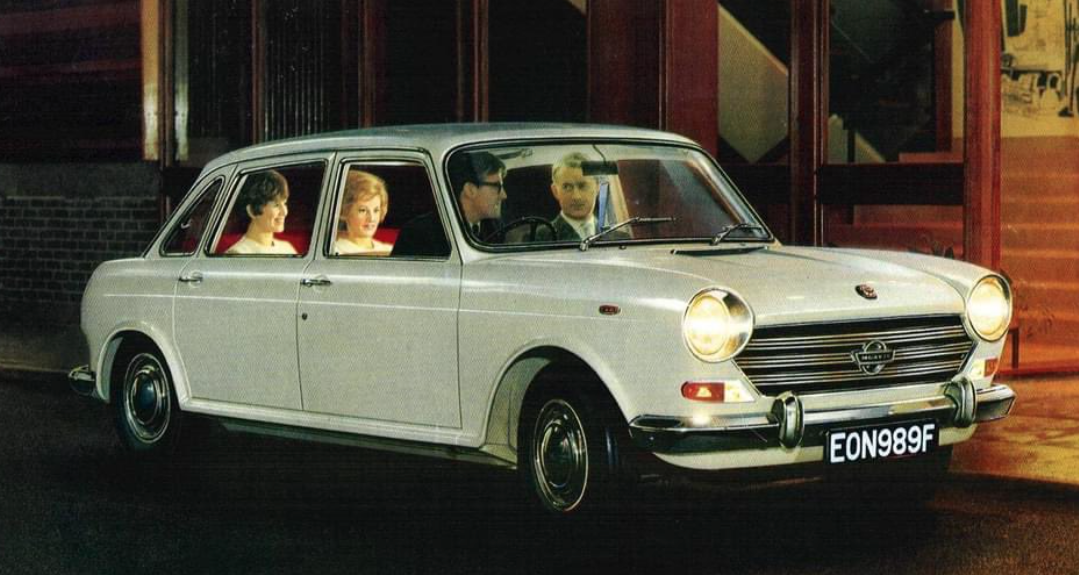 Again, extensive front end changes, some subtle rear end changes, and just to be sure everyone is fooled, the number plate now ends with an “F” instead of a “D.” The perfect crime.

Interior shots got the same treatment: 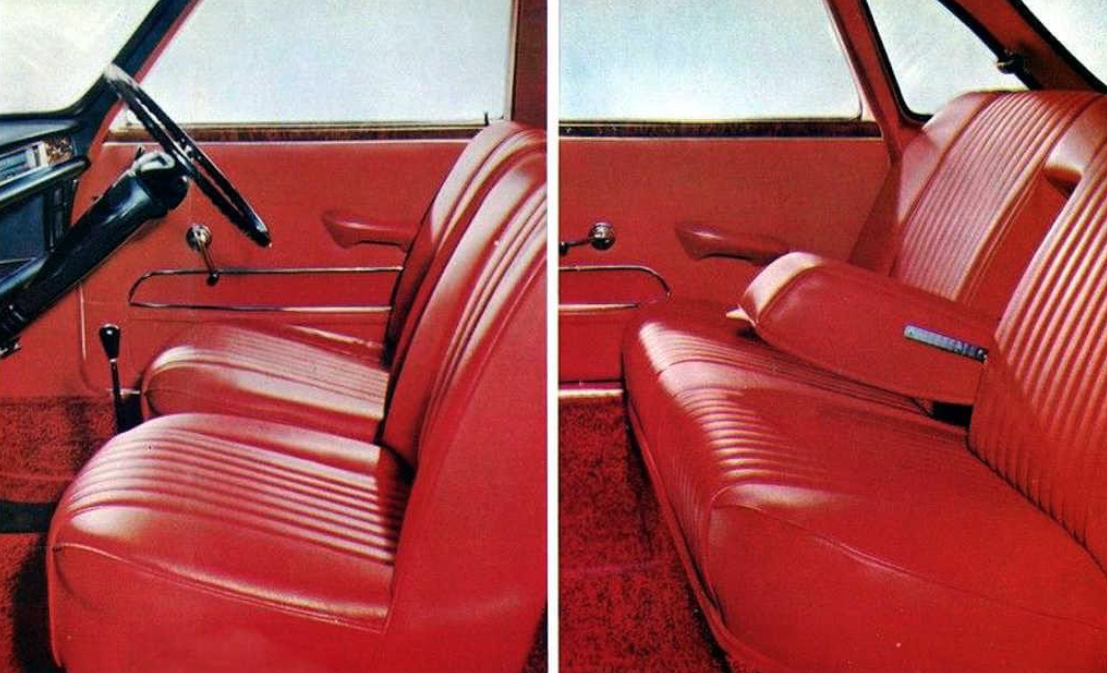 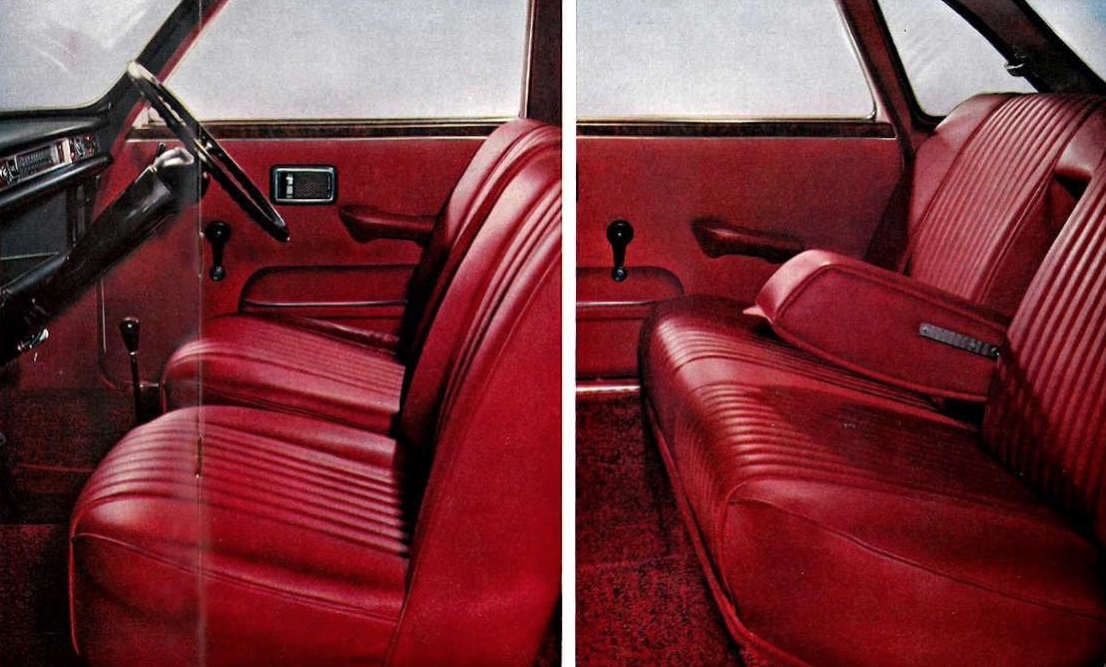 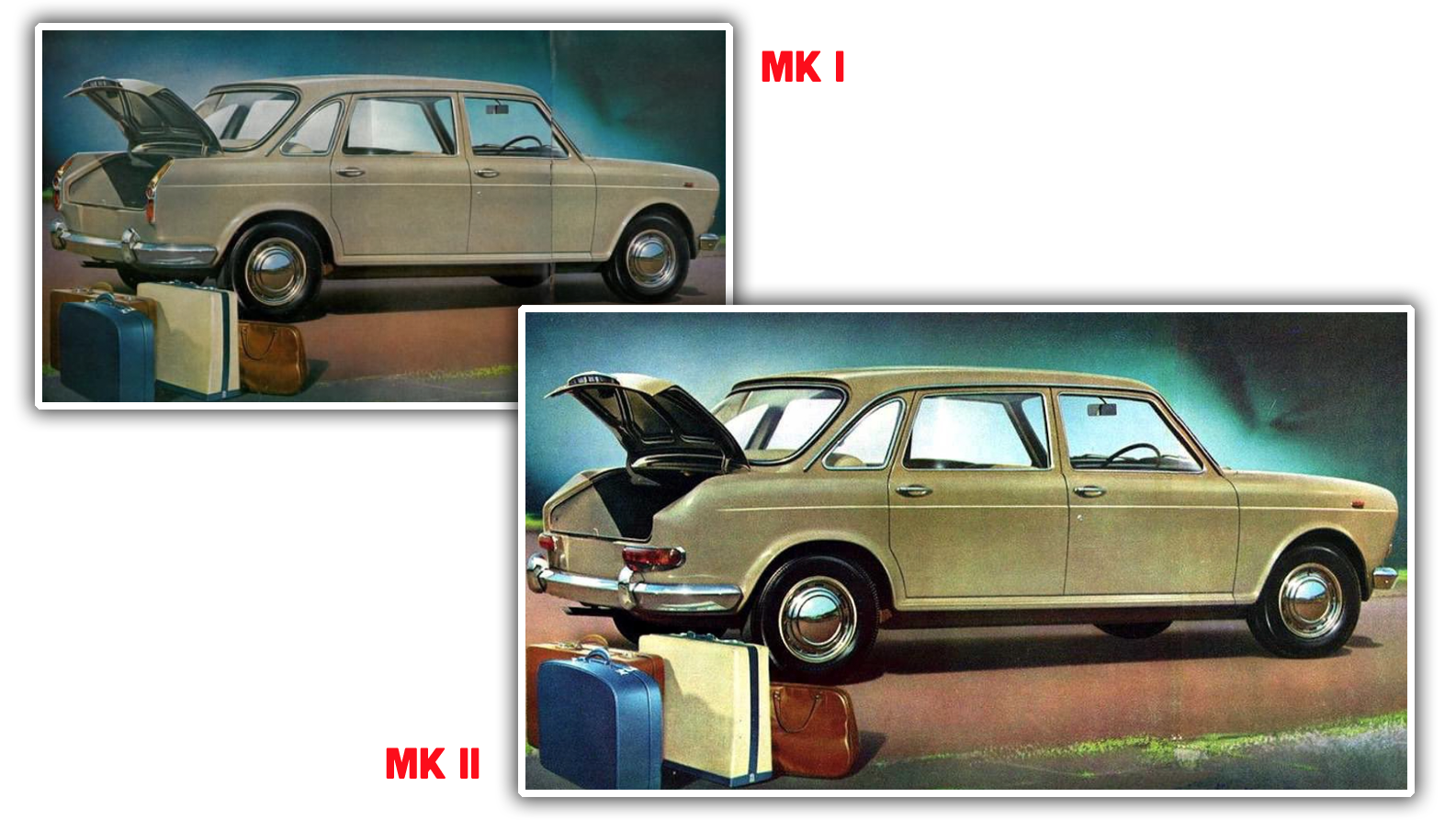 The whole rear end and taillight treatment changed and it still wasn’t enough to warrant a new photo.

I’m still unclear as to why BMC took this approach, so I reached out to Andrew, who had some interesting insights:

That’s a great question & was pondering that myself. I think you could say it was easier for them to do an artistic version if the actual car wasn’t available (which could be the case for the Mk2 1100 given the last-minute nature of its development.

It also allowed them to simply reuse old brochures images which might’ve saved on marketing costs.

The fact is BMC was a firm that defied logic at times.
A group of shop stewards visited British PM Harold Wilson at a party conference to complain about BMC redundancies. I think 7 were supposed to meet him & 12 turned up which led to him quipping that this was typical of the firm needing 12 people to do the job of 7.

So, according to an expert, who the hell knows what BMC was thinking? Photo retouching was always a skilled profession and had to take some time and money, but I suppose that could still be less than a photographer and securing a location, especially if it included models and scenes like BMC seemed to prefer.
And, of course, you have to actually have access to these new cars to shoot them. I suppose the best answer is that BMC was just doing the best they could. And, if that means giving us these remarkable examples of pre-Photoshop photo-fakery, then I’d say it was worth it.
(image sources: BMC, Classic Car Catalogue FB page, The Car Factoids)
Share on facebook
Facebook
Share on whatsapp
WhatsApp
Share on twitter
Twitter
Share on linkedin
LinkedIn
Share on reddit
Reddit

I'm a co-founder of the Autopian, the site you're on RIGHT NOW! I'm here to talk to you about taillights until you cry and beg me to stop, which I absolutely will not. Sorry. Hug? Also, David's friend.
Read All My Posts »
PrevPreviousFord Reaches $19.2 Million Settlement Over Claims Of Bullshit Advertising
NextCanada Is Tired Of Daytime Running Lights Confusing People Into Driving Without Taillights. These Neat New Switches Are The SolutionNext