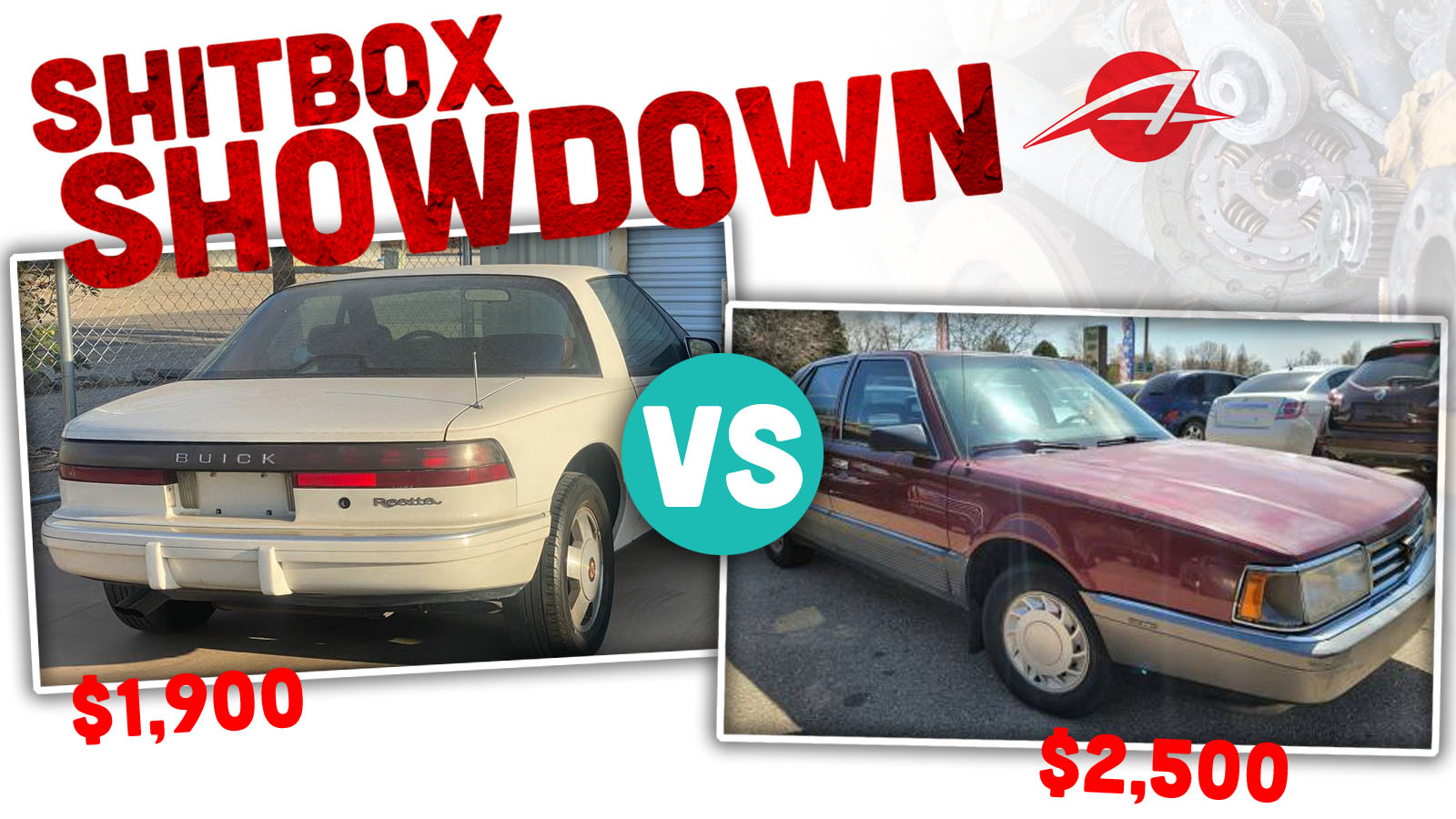 Welcome one and all to the Wednesday edition of Shitbox Showdown! We’ve got a couple names you haven’t heard in a while today, but before we get there, we need to figure out who you’re all going to be for Halloween:

Break out the hubcap helmets, because it’s David by a landslide! Maybe the vote would have been closer if I’d been able to find a Nissan Pao, but I shudder to think what a $2500 Pao would look like. Probably full of spiders.

[Editor’s Note: I was robbed. DT going to hold this over my head forever. Crap. – JT ]

You know what probably isn’t full of spiders? The cubbyholes behind the seats of a Buick Reatta, or the center armrest of an Eagle Premier. (But can somebody check for me to make sure? Spiders freak me out.) Yes, that’s right – today we’re going to look at a two-seater Buick with a primitive touch-screen, and a Chrysler-ish product from the late ’80s that isn’t a K-car.

Runs/drives? So they say

In the 1980s, every GM division had a cool 2-seater except for Oldsmobile and Buick. Chevrolet had the Corvette, Pontiac had the Fiero, and starting in 1987, Cadillac had the Allante. Buick got in on the action in 1988 with this car, a stubby little coupe (and later convertible) based on a shortened Riviera platform, and called it, in the grand GM tradition of making up words for car names, the Reatta.

The Reatta was meant to be Buick’s halo car, and as such, was stuffed to the gills with modern technology, most of which worked: independent suspension all around, four wheel disc brakes, the ubiquitous ’80s digital dash, and in the center console, a primitive version of a touch screen – called the Electronic Control Center – which included the audio system, climate controls, a basic trip computer, and access to vehicle diagnostics, all at the owner’s fingertips. Customers hated it, and after a couple of years Buick abandoned the touch screen in the Reatta (and Riviera, which also used this system) in favor of a standard-issue Delco stereo and conventional climate controls. How times have changed.

[Editor’s Note: Mark is leaving out the most important part about that touch screen: it was a CRT! Yes, as in cathode ray tube, not the thing weirdos are freaking out about in schools even though there are probably more Trinitron CRTs in elementary schools than the other kind. Anyway, here’s an old commercial featuring one and when I went through an old Buick Apple II floppy disk, they had a full rundown of what that CRT setup did:

Hey! My first Editor’s Note with a video! – JT]

The fact that this Reatta has the old digital dash and touch screen leads me to believe it is listed incorrectly and is actually a 1989 model, since all the info I found says that 1990 was the first year of the conventional dash. An incorrect listing, you say? On Craigslist? Perish the thought.

Overall, this car looks pretty good. There is some wear and tear in the interior, and a couple of dings outside, but it’s a good ten-footer. The seller says it runs and drives great, but the flat tire makes me wonder how out of date that information is. Being a California car, there is also that worry about non-op status and the possibility of back registration fees. This car has the same good old 3.8 liter V6 and overdrive automatic as a zillion LeSabres, Electras, Delta 88s, Bonnevilles, and half of the rest of GM’s lineup, so parts aren’t a problem, nor is reliability.

I always thought these cars looked sharp in white. A Reatta De Blanc, if you will. Just don’t get pulled over by the Police. (I had to. It was right there.) 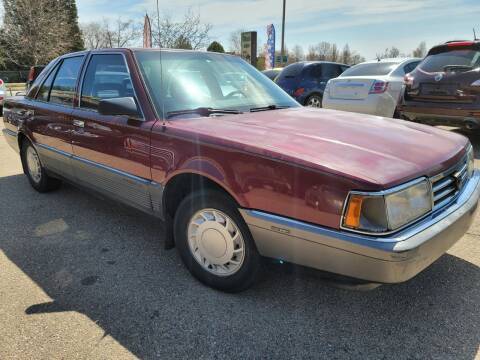 First, I apologize for the tiny photos on this one. They were taken by a used car dealer in Greeley, Colorado, using their state-of-the-art digital camera. Two whole megapixels! The clerk at Circuit City said that’s all he’d ever need. But it’s not like I’m likely to find another Eagle Premier to feature instead, so it is what it is.

And what is it, exactly? It’s a French-engineered sedan, styled by an Italian, with an interior by an American, built in Canada, sold by Chrysler, alongside rebadged Mitsubishis. (Make sense?) There’s no indication in the ad of which engine is under the hood, but it’s either an AMC 2.5 liter inline 4, or a 3 liter version of the Peugeot-Renault-Volvo V6, infamous for underpowering the DeLorean. If I had to guess, this one has the 4 cylinder; it sure looks like a base model. 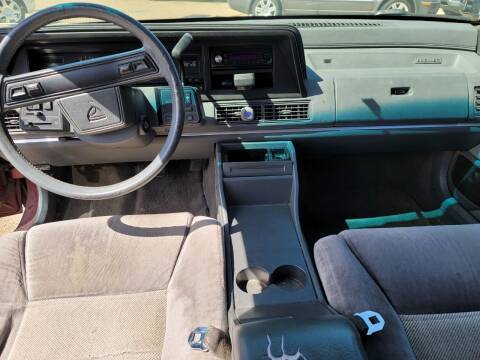 Whichever engine it is, it’s backed by a column-shifted 4 speed automatic, even though there’s a perfectly good center console between its bucket seats with a massive expanse of gray plastic where a floor shifter could go (and does, in fancier versions). The Premier’s exterior styling was done by Giugiaro in Italy, but the interior is all Dick Teague of AMC fame, and I gotta say, it does look inviting and comfy in there. Too bad about those idiotic motorized seatbelts (they’re disconnected in these photos, but trust me – they’re there.) 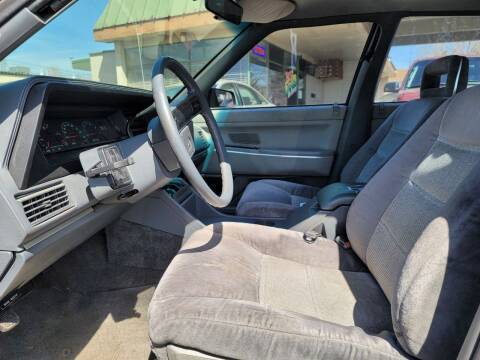 The ad is terse, to put it mildly. All we have to go on besides the photos is “good condition.” We have to assume it runs, I guess, if they’re offering test drives, but c’mon guys, throw us a bone here. 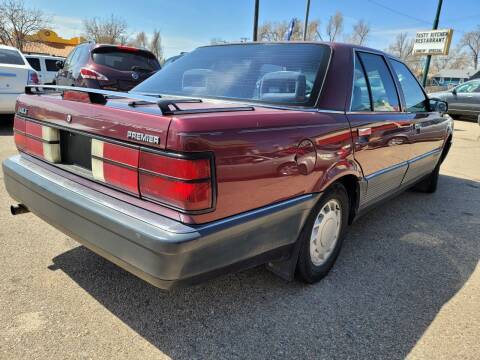 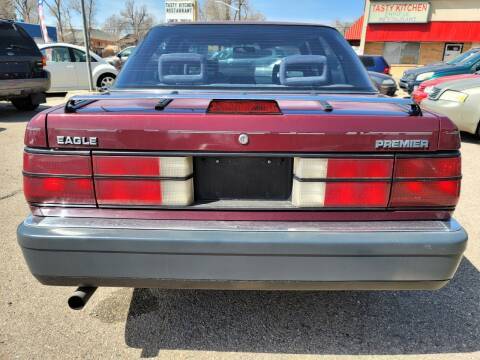 Bizarrely, Chrysler also sold this car as the Dodge Monaco. Chrysler was under contract to use up those awful PRV lumps, so slapping a Dodge badge on the Premier and forcing it to compete against their own Dynasty sedan was one way to do that. Probably not the best way, but I can’t come up with a better answer, even with 30 years of hindsight. They managed to move nearly 140,000 of these over six model years, but I haven’t seen one in ages, and even when I worked at a service station in the mid-1990s, these were few and far between. You can take it to Radwood and be fairly certain you’ll have the only one there. (Probably not true of the Reatta, even though Buick only sold about 20,000 of those; they have a following, and the Premier… doesn’t.)

So those are our choices for Wednesday: a failed sporty halo car, and a family sedan flop. Which one deserves to be rescued from the scrap-heap of history?