Here’s A Look At A Working Bus From 1833: Cars Before Cars

Mercedes-Benz did not invent the automobile in 1886. I know it likes to say it did, but it didn’t, not by a long shot. Automobiles have been around in various forms since 1769, and this new series, Cars Before Cars, is going to feature one of the many incredible automobiles that was in use before Benz’s Patent-Motorwagen even popped and wheezed its way onto a road. We’re going to start with a fascinating vehicle, Walter Hancock’s steam omnibus from 1833, the Enterprise.

There was a number of automobiles developed prior to this boom, but they were generally experimental one-off machines that would only have been operated or even ridden in by a pretty small and select group of people. The first time any member of the general public, not directly involved with the development or funding of automobile projects in some way, could have any sort of real access to travel by automobile was in London in the 1830s.

There were plenty of people and companies building steam-powered omnibuses (that’s just a dated term for “bus”) with the intent to provide mass transit to Londoners. Horse-drawn omnibuses had been introduced to London in 1829 by George Shillibeer, who had previously been contracted to build similar mass-transit horse-carriages in Paris.

The fact that it only took two years after the introduction of horse-pulled buses for motorized bus service to appear in London is pretty incredible, and the man who started the first regular automobile bus service was Walter Hancock, with his bus, hilariously named the Infant.

The smallish, 10-seat Infant was actually built in 1829, and started regular service between Stratford and central London in 1831. It then began doing regular, money-earning runs from London to Brighton.

Later, in 1833, we’re introduced to the voyages of the steam bus Enterprise, which had a continuing mission to explore strange new routes (well, mostly the route between London and Paddington via Islington), seek out new fares and passengers, and boldly go where no steam bus had gone before.

The Enterprise is an especially interesting bus of this era because of the relative refinement and sophistication of its design. Where slightly earlier steam omnibuses, like the famous ones from Goldsworthy Gurney, looked and seemed like mechanically-adapted horse carriages, the Enterprise really seemed like something completely new unto itself, after only a few years of difference in age. Here, let’s compare: 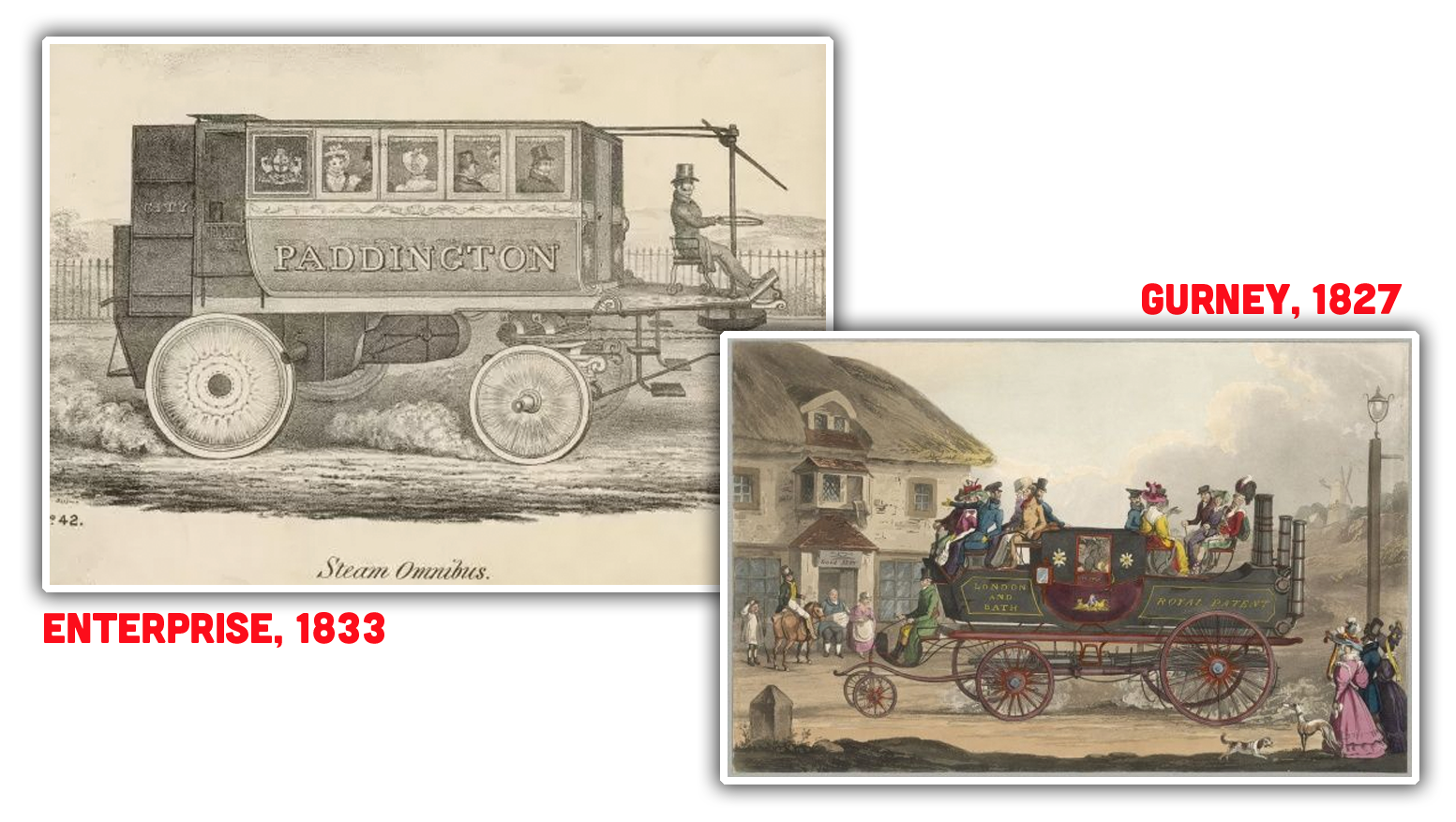 Look at the difference there! The 1827 Gurney looks like a normal carriage plopped onto a longer chassis, with the steam engine slung out back and passengers just stuck on top, wherever some benches could be bolted. It looks like a design that just sort of happened, as opposed to following some master plan.

The Enterprise, on the other hand, is essentially shaped the same as a modern bus is today: a box on wheels (with seating for 14) with the engine mounted at the rear, and the rest of the drivetrain below. 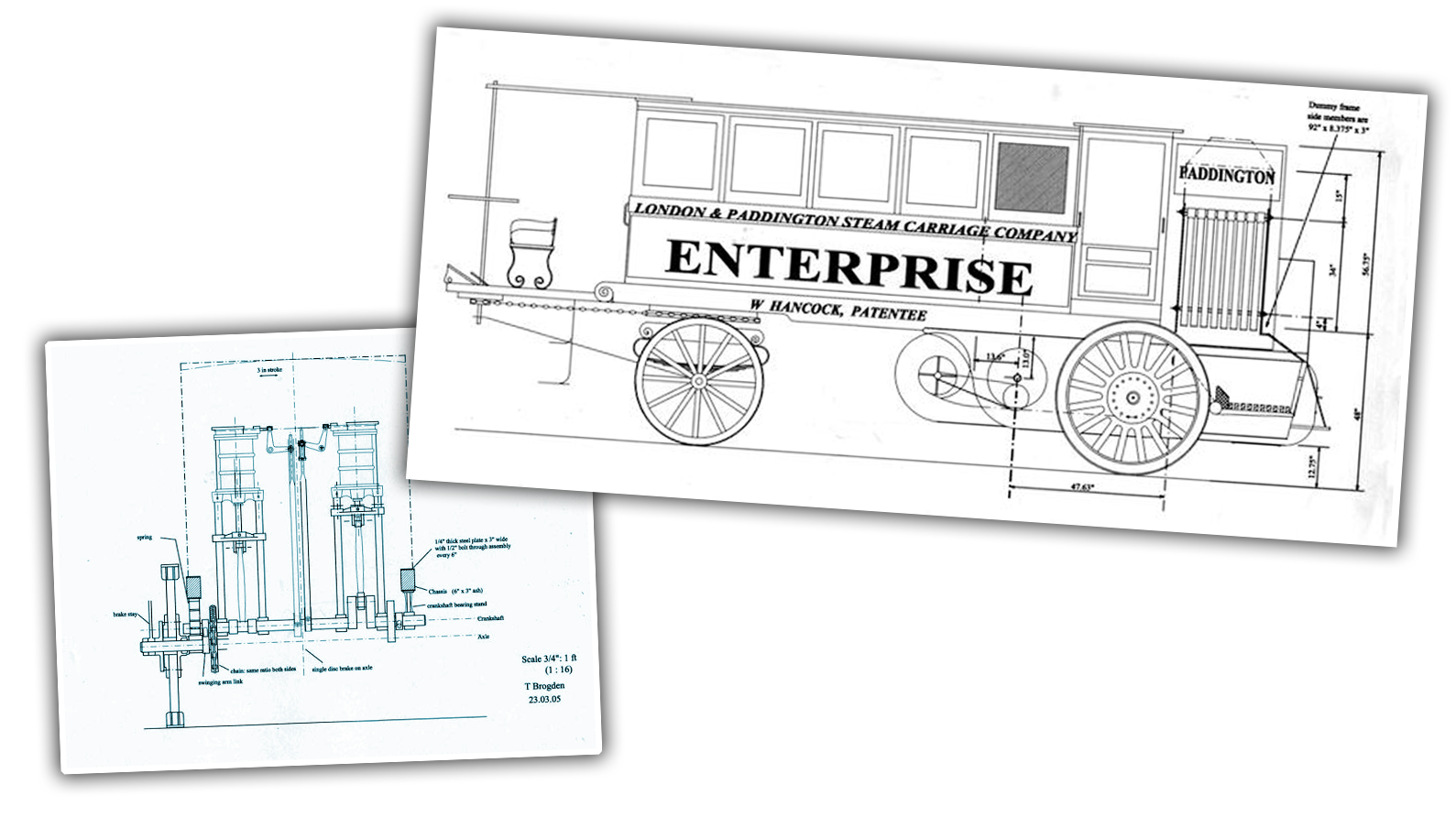 The Enterprise was full of advanced features: full leaf-sprung suspension for all wheels, a twin-vertical-cylinder engine capable of running at 100 RPM and able to drive the rear axle directly below it in quite a compact (for the time) setup; it burned coke instead of coal (coke burns hotter and cleaner) and even had a crankshaft-driven fan to help keep exhaust from becoming too obtrusive.

Unlike modern buses, though, it took three people to drive the Enterprise: the driver, who steers the bus with the large, horizontal steering wheel and controls the speed via a regulator; an engine tender at the rear who maintained the water level of the boiler; and someone to attend to the boiler’s fire and to also control a brake handle, which was used to keep speed controllable down hills. There’s no obvious answer to how the team of three would have communicated as the vehicle drove, which could be as fast as 20 mph.

What’s incredible is that these early automobiles had the potential to be genuinely competitive with horse-powered omnibuses of the era. They were less likely to overturn, were cheaper to operate, and caused less damage to roads than horse hooves. Steam buses were also less likely to continue to attempt to pull a carriage with brakes locked, since they lacked independent horse brains that might make decisions counter to what the driver wanted.

In the early 1830s steam buses were becoming so well known that they inspired popular culture works like this famous (well, to early 1800s car geeks) cartoon: 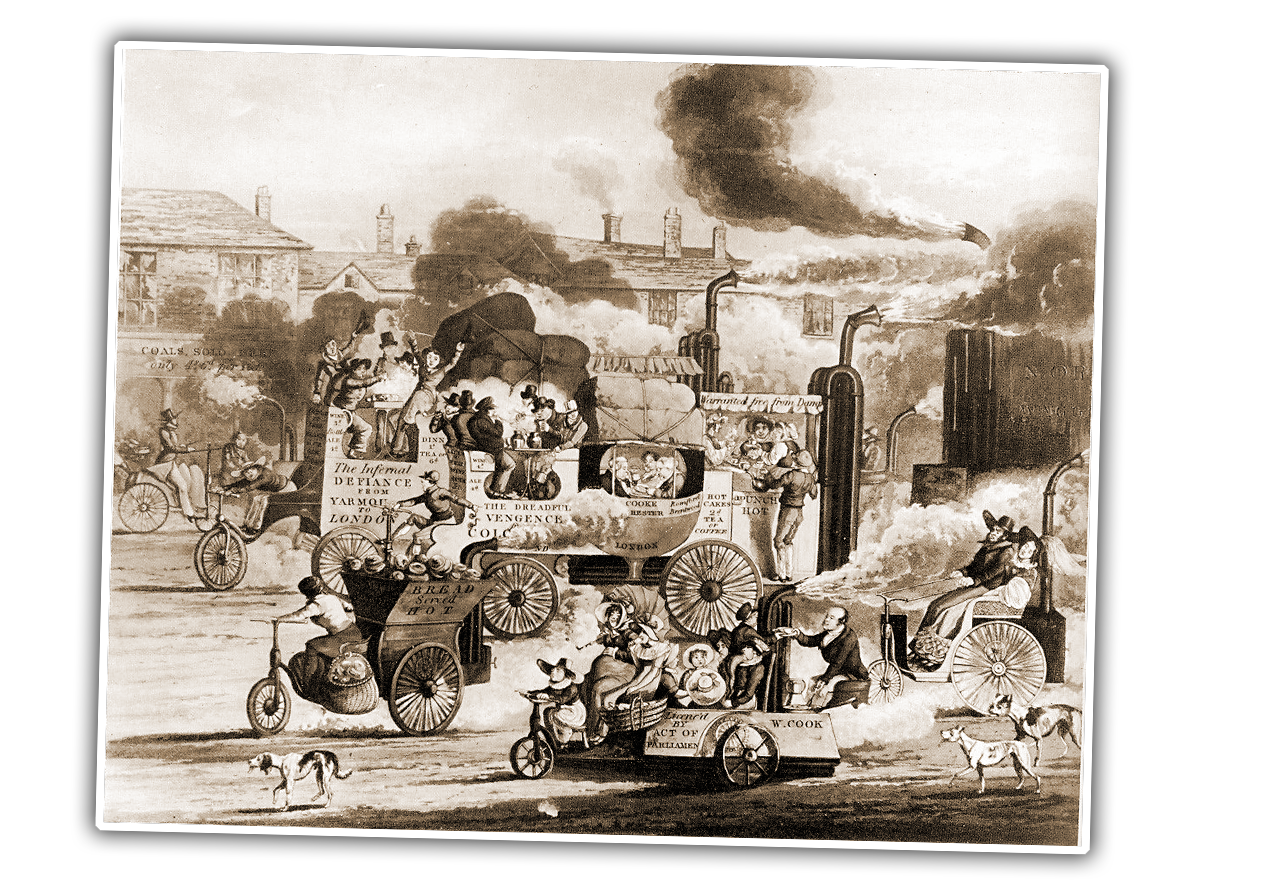 I’ve written about this cartoon before–I had thought it was from the British satirical magazine Punch, but Punch was founded in 1841, and this is from 1831. The cartoon is titled A View in Whitechapel Road and was drawn by H.T. Aiken. It shows what is, essentially, a traffic jam, of automobiles, buses and private cars and commercial vehicles, some of which have names like The Infernal Defiance and The Dreadful Vengance, and there’s a hot bread-vending truck that I bet smells great.

Also interesting to note is the depiction of pollution from all these vehicles, shown by their billowing clouds of steam and smoke. It appears to be exaggerated, indicating that smog was a concern even back in the 1830s.

Hancock was able to operate a bus service with the Enterprise and other buses, including one called, bafflingly, Autopsy, and others called Era (I and II, even) and Automaton, which could seat 22. 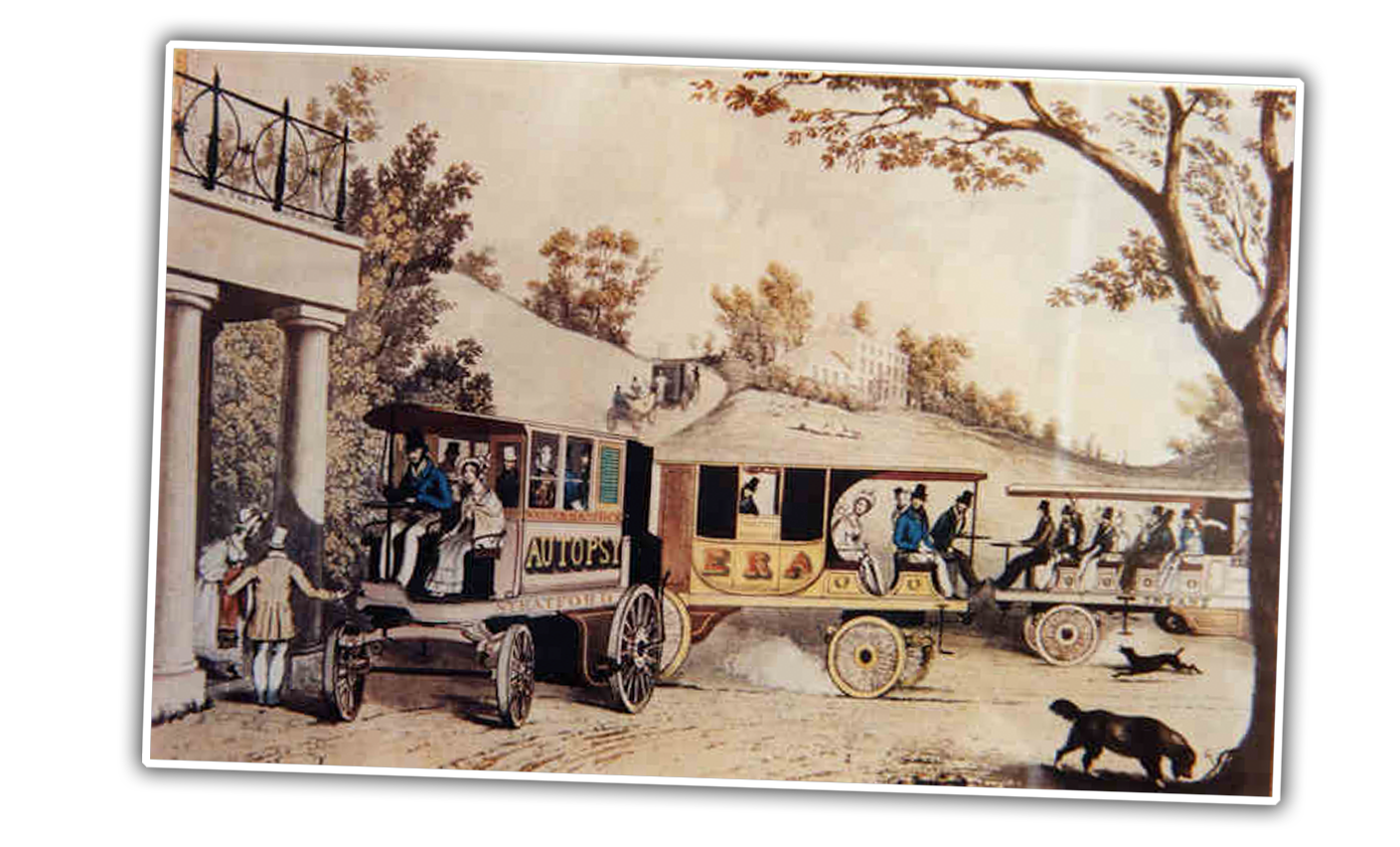 Technically, the steam buses performed quite well, and put up impressive numbers: Hancock’s buses travelled 4,200 miles, carried 12,761 passengers, made 143 round trips from London to Paddington, 525 trips from London to Islington, and 44 to Stratford. Despite this, making money with them proved extremely difficult, because the powerful Horse Carriage Lobby (that was a thing) and Turnpike Trusts (organizations of road owners) did all they could to impede the progress of steam buses, legal and otherwise.

For example, on some roads, road tolls were 4 shillings for horse-drawn coaches, while they were 48 shillings for steam vehicles. They really couldn’t win, and this was even before the famously restrictive “Red Flag Acts” enacted by Parliament in 1865 that severely restricted automotive development in the UK for years.

These buses were really the first access to cars normal people would get, and the way Hancock was developing them could have led to mass-market cars decades earlier, or at least my overactive imagination claims. 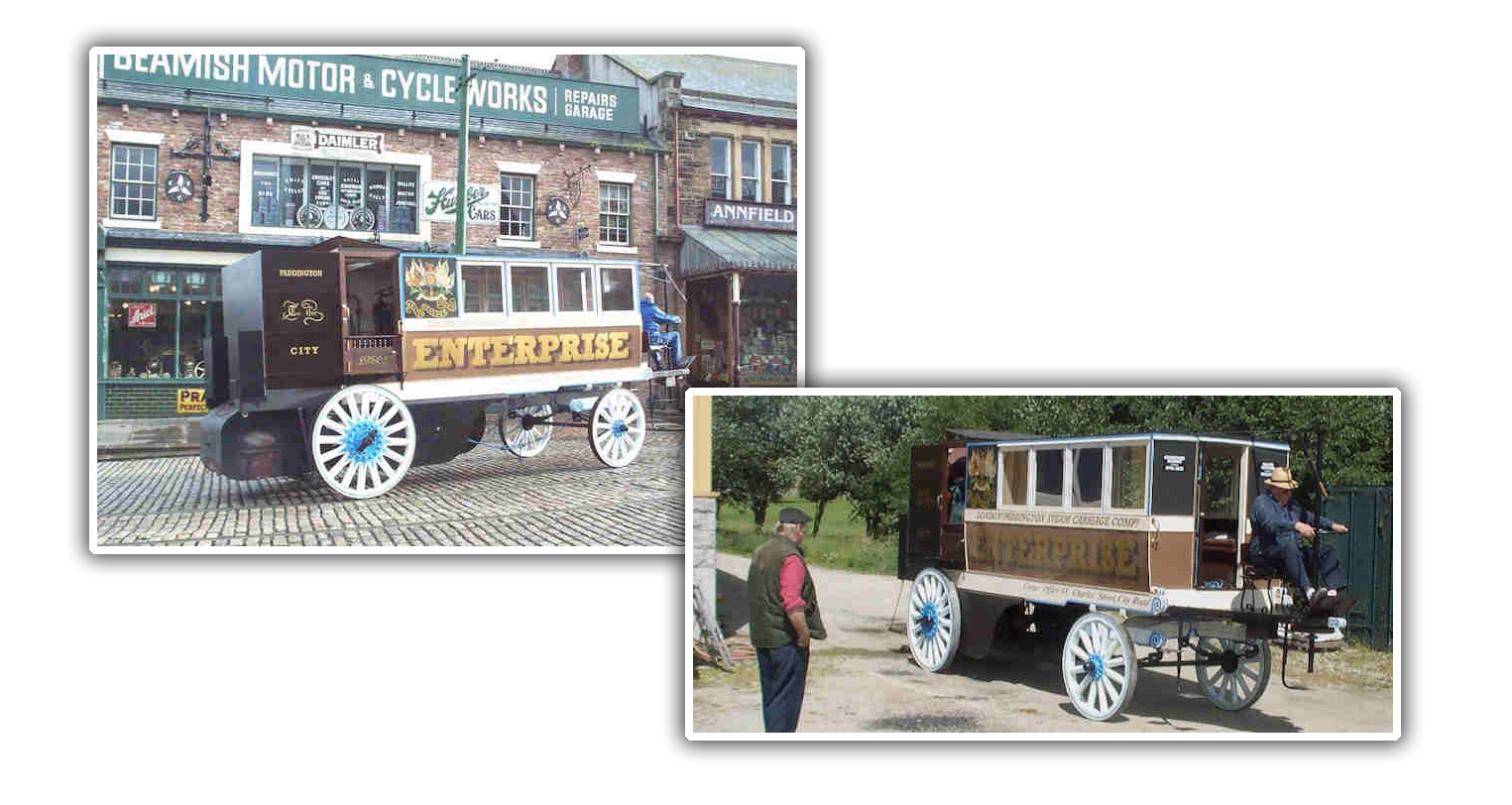 It’s also worth noting that Hancock kept excellent records and drawings of his designs, and using those a replica of the Enterprise was built by some extremely dedicated enthusiasts, as you can see above there.

This era of automotive development doesn’t get a lot of mass-media attention, but it absolutely should. The first boom era for automobiles was the 1830s, and it’s high time more people realized that.

I'm a co-founder of the Autopian, the site you're on RIGHT NOW! I'm here to talk to you about taillights until you cry and beg me to stop, which I absolutely will not. Sorry. Hug? Also, David's friend.
Read All My Posts »
PrevPreviousI’m Driving The 2022 Ford F-150 Lightning Soon: What Do You Want To Know?
NextWhy Automakers Sometimes Overpressurize Tires And How That Can Affect Your Handling: Ask An EngineerNext