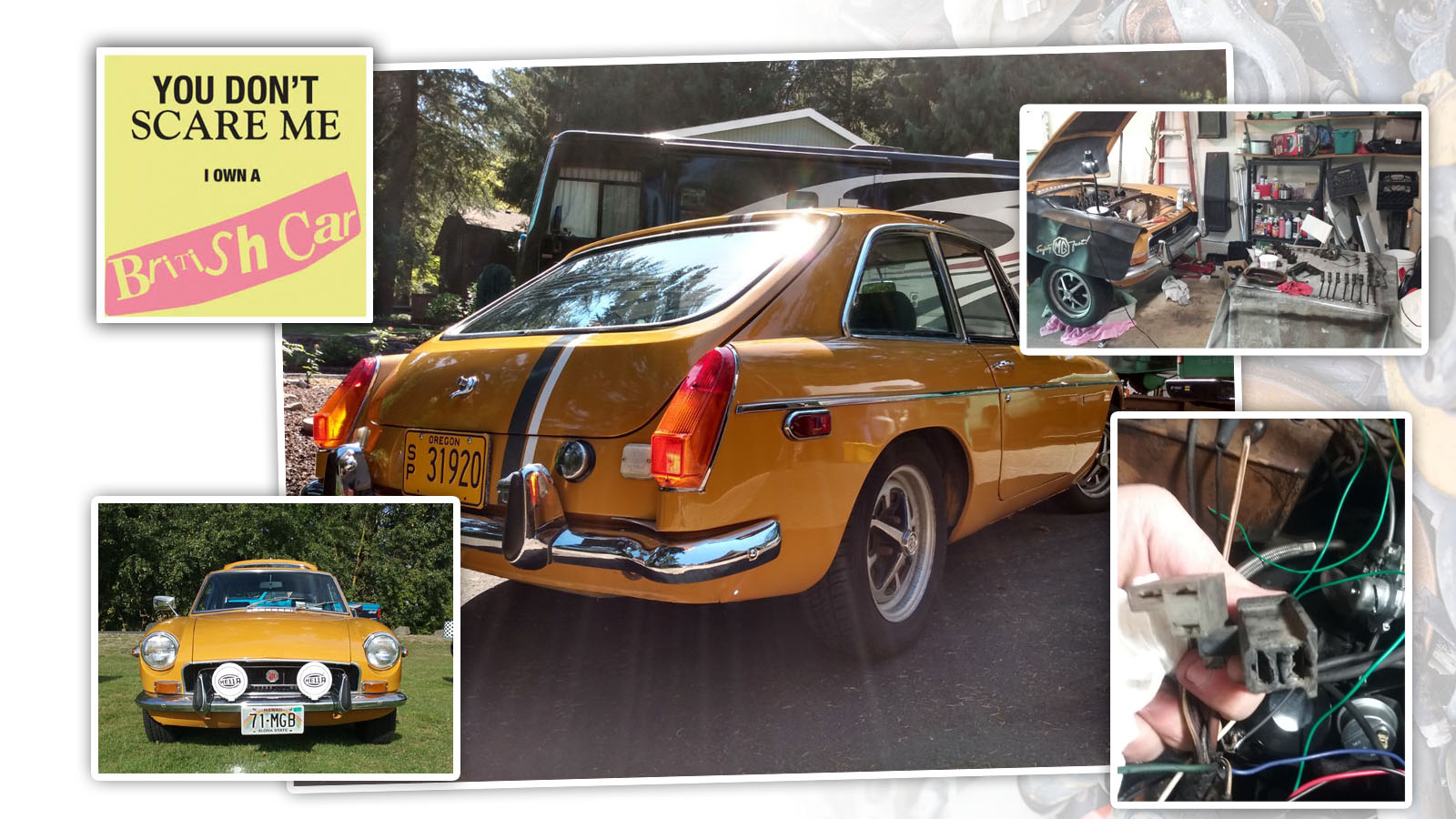 The starting procedure for my 1971 MGB GT is as follows: Pull out the choke handle and give it a quarter-twist to the left to lock it in place. Insert the key and turn it to “Run,” but not “Start.” Flip the chrome toggle switch I installed that activates the old points-type SU fuel pump and listen as it fills up the fuel line: puckapuckapuckapuckapuck-puck-puck….puck……puck. Make sure the gearlever is in neutral, then turn the key to Start. It usually catches after five or six revolutions. If it’s warm out, you can twist the choke handle back to horizontal and slide it in almost right away; if it’s cold, give it a minute or two. The engine will settle into a nice loping grumble at around 800 RPM. Don’t try to read the factory Smiths tach in the dash; it has never worked. The $20 eBay tach attached to the steering column works just fine, however.

The idle has a little lope to it because the engine is equipped with a “Fast Road Cam,” giving it more valve lift and duration than stock— just enough to move the horsepower and torque curves up a touch. It has this camshaft because a previous owner either set the valve lash wrong or used the wrong oil or both, and destroyed the original cam and lifters. “It needed replacing anyway” is as good an excuse to add go-fast parts as any. The car has a full stainless-steel exhaust system, including a tubular header, for the same reason. Yes, it’s loud. But good loud.

Other parts have been replaced as needed — the entire wiring harness, for one. Everything you ever heard about Lucas electrical systems is true. Add in fifty years of splices, half-ass repairs, and corrosion, and the only real solution is to rip it all out and start over again. It’s not stock, either. I used a GM-style “universal” wiring harness with eleven fuses. The stock MGB fusebox has four.

Out on the road, the noise from the fancy stainless steel exhaust is ripping fabric set to a syncopated staccato beat. It’s not the smooth full-throated song of its Italian twin-cam contemporaries. British engines are “undersquare,” with cylinder bores smaller than their strokes, owing to a quirk in British tax law a century ago. Taxable horsepower was calculated using only the bore diameter, not the total displacement, so automakers built engines with small pistons that traveled a long way in order to keep the taxes down and the displacement, and therefore actual horsepower, up. The statute was changed in 1947, but old habits die hard. The result is a torquey engine that doesn’t like to rev; it’s happy at 4,000 RPM, but runs out of breath around 6,000.

But the handling! After World War II, the British turned their old airfields into race tracks, and set to work building sports cars, and learning how to make a car go around a corner as fast as possible. My MGB has a set of Spax adjustable tube shocks in place of the original lever-action shocks; they were installed by a previous owner, and help the car take corners with authority.

The Car Was A Problem On Day One

I wanted an MGB GT since I was a kid. My dad is an MG fan from way back; he drove a red ’61 MGA in college. He courted my mom in it. In a way, I owe my very existence to Cecil Kimber’s little sports car company. Dad never bought another MG, but there were plenty of models and posters and books around. One book in particular stood out: MG, The Book Of The Car, a glossy coffee-table volume written by Anders Ditlev Clausager. Clausager was the archivist at the British Motor Industry Heritage Trust, and his books are considered the definitive works on British cars. I didn’t know that when I was six; I just knew I loved the photos, and fixated on the MGB GTs.

My car spent its first 43 years in Hawaii, on the island of Oahu. I am its fourth owner. I bought it from a young woman who shipped it to the mainland when she moved here, intending to fix it up and drive it, which never happened. You hear that story a lot with little British cars: I’m gonna fix it up, someday.

I handed her $2,300 cash after a drive around the block and a very cursory inspection, and headed home. It broke down, of course. A combination of a failed engine mount and a slightly bent fan blade caused the fan to carve a neat crescent-moon shape into the lower half of the radiator, spraying coolant everywhere and ending my first trip six miles in. While my wife went to find us lunch and I waited for the tow truck, a young boy watched me from across the street, staring wide-eyed at my sleek little broken sports car as it oozed vital fluids onto the gravel shoulder. I fear that the experience may have inadvertently turned the boy into a future British car lover, and for that I am truly sorry. [Editor’s Note: Sounds like it was more likely to have kept him away from British cars. I rally hope you didn’t turn this kid into a sensible Corolla driver. -DT].

Being The Youngest Guy In The British Car Club

On the second Friday of the month, the parking lot of Stark Street Pizza in southeast Portland gets a lot more interesting, and acquires a few new oil stains. Inside, in a side room stuffed with Little League baseball trophies and drag racing memorabilia, the Columbia Gorge MG Club holds its monthly meeting. The pizza is only so-so, but the conversation is delightful. My wife and I are, at age 49, just about the youngest members of the club. They treated us like kids at first, and then I came second in a British car trivia contest at a club picnic, and they understood that I know what I’m talking about.

The club organizes monthly drives, but I have yet to join them on one. My MGB has taken several years to whip into any semblance of reliability, and it’s only within the past year that I feel confident taking it more than about 20 miles from home. In September, we gather with a few hundred other British car fanatics at the All-British Field Meet, held on the grounds of Portland International Raceway. I have missed two Field Meets in the six years that I have owned my MG: in 2018, my wife and I were on the way when a mounting bolt fell out of the left front brake caliper, causing the left front wheel to lock up every time I touched the brakes. I turned around and limped the car back home. And in 2020, the event was canceled, of course, along with everything else.

I’ll Never Part Ways With It

I’ll probably never sell this car. I have too much invested in it, not in terms of money, though there is quite a bit of that as well (mostly my dad’s, since he insisted on helping me with repair costs), but in terms of the time amd effort spent on it. I’ve crawled around under it and taken huge chunks of it apart and I know it inside and out. My fingerprints are all over the engine internals. I’ve bled on it, and I’ve spent time standing in the garage just looking at it, the long curve of the hood (sorry, bonnet), the elegant line of that Pininfarina-styled roof (unchanged from the original 1964 prototype), the wooden gearshift knob that I won at a club raffle. Spend enough time and energy on a car, and it’s yours in a way no selling price can ever match.

This car has a name, by the way: Maggie May. Like the woman in the song, she’s older than I am, and takes advantage of my affection. And, if you have got someplace to go… Maggie may get you there.

You don’t scare me. I own a British car.