Yesterday, David was telling me a two-fisted tale of daring and adventure about getting an alternator for his old Postal Jeep from a junkyard, and how he pulled the one he needed from an old Pontiac Parisienne. I didn’t really hear the rest of his story from that point on (I think he mentioned something about accidentally swallowing three spark plugs and part of a rusty hose clamp?) because I was too overcome with the idea of the Pontiac Parisienne and how it may very well be one of the absolute least “Parisienne” cars ever built by human hands, from Paris or otherwise. And that made me remember the other car named Parisienne, the Renault 4 Parisienne, and how that car is absolutely, 100%, uncut, raw Parisienne. This needs to be explored a bit.

Just so we’re all on the same page, the word “Parisienne” means, literally, a woman or girl from Paris, France. In popular culture, the implications of a Parisienne are usually of young, attractive, and stylish woman, as is maybe most obviously portrayed by Brigitte Bardot, who starred in a movie called La Parisienne: 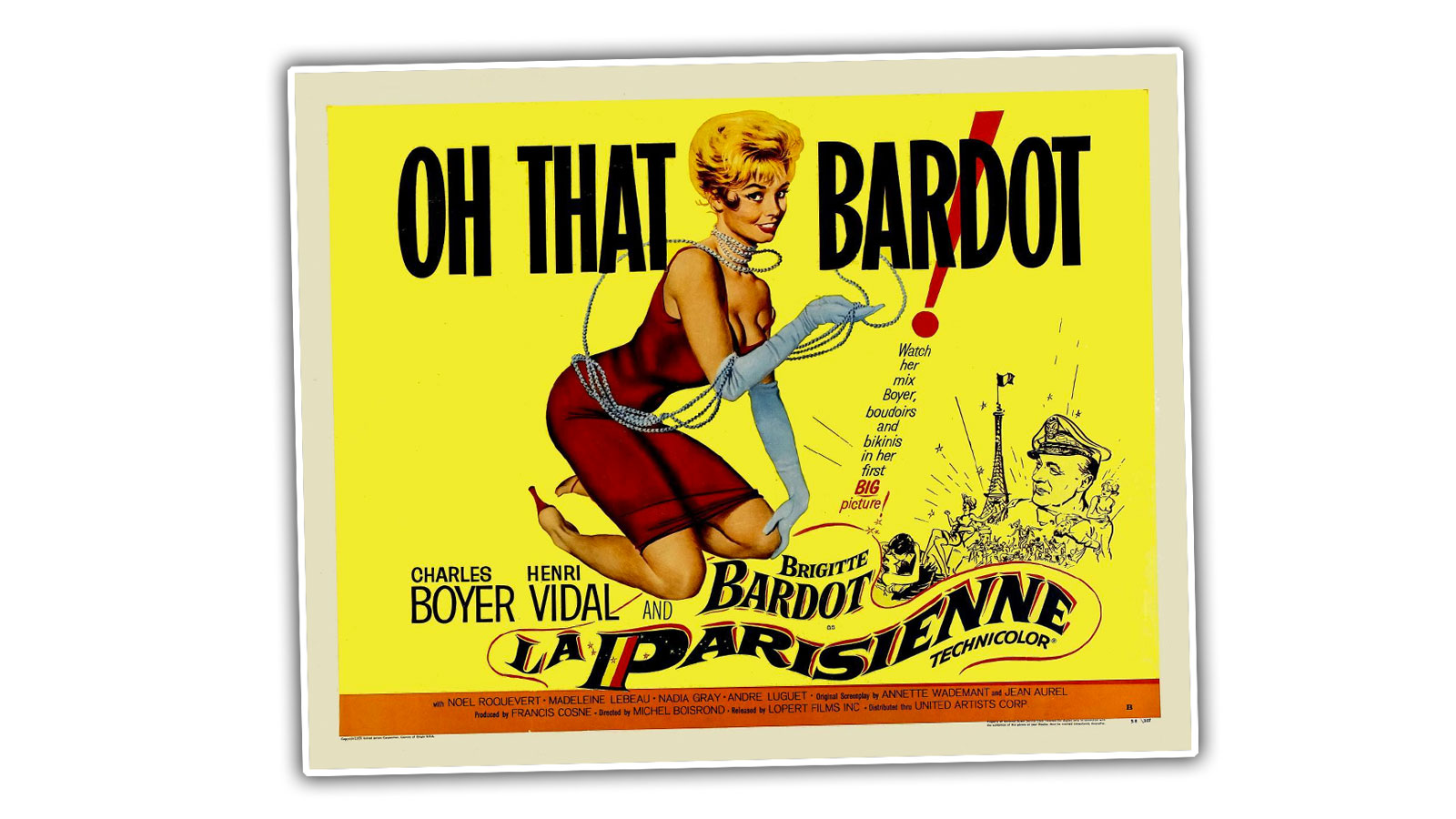 When you hear the term Parisienne, I suspect that for most people the vague images conjured up in their heads is something like what you see up there, all coquettish and maybe saying ooh-la-la in a café. Something like that.

Now let’s look at what the Pontiac Parisienne is, specifically the one I’m most familiar with, the fifth-generation one that was sold in America from 1983 to 1986. The Parisienne name had been used on Canadian-market Pontiacs since 1958, where it was mostly a slightly more up-market Chevy Caprice or Impala, depending on the year.

The Parisienne we got in America was a GM full-size B-platform car, filling the slot that the Pontiac Bonneville had held in America until the Bonneville was downsized to a mid-sized platform. So, in America, our Parisienne was essentially a badge-engineered Chevy Caprice with a different grille and taillights and other trim, and you could have it as a sedan, coupé, or station wagon. It was huge, it was boxy, it made absolutely nobody think of Paris.

I mean, look at this thing, and then try to explain to me how much it reminds you of, say, Amélie: 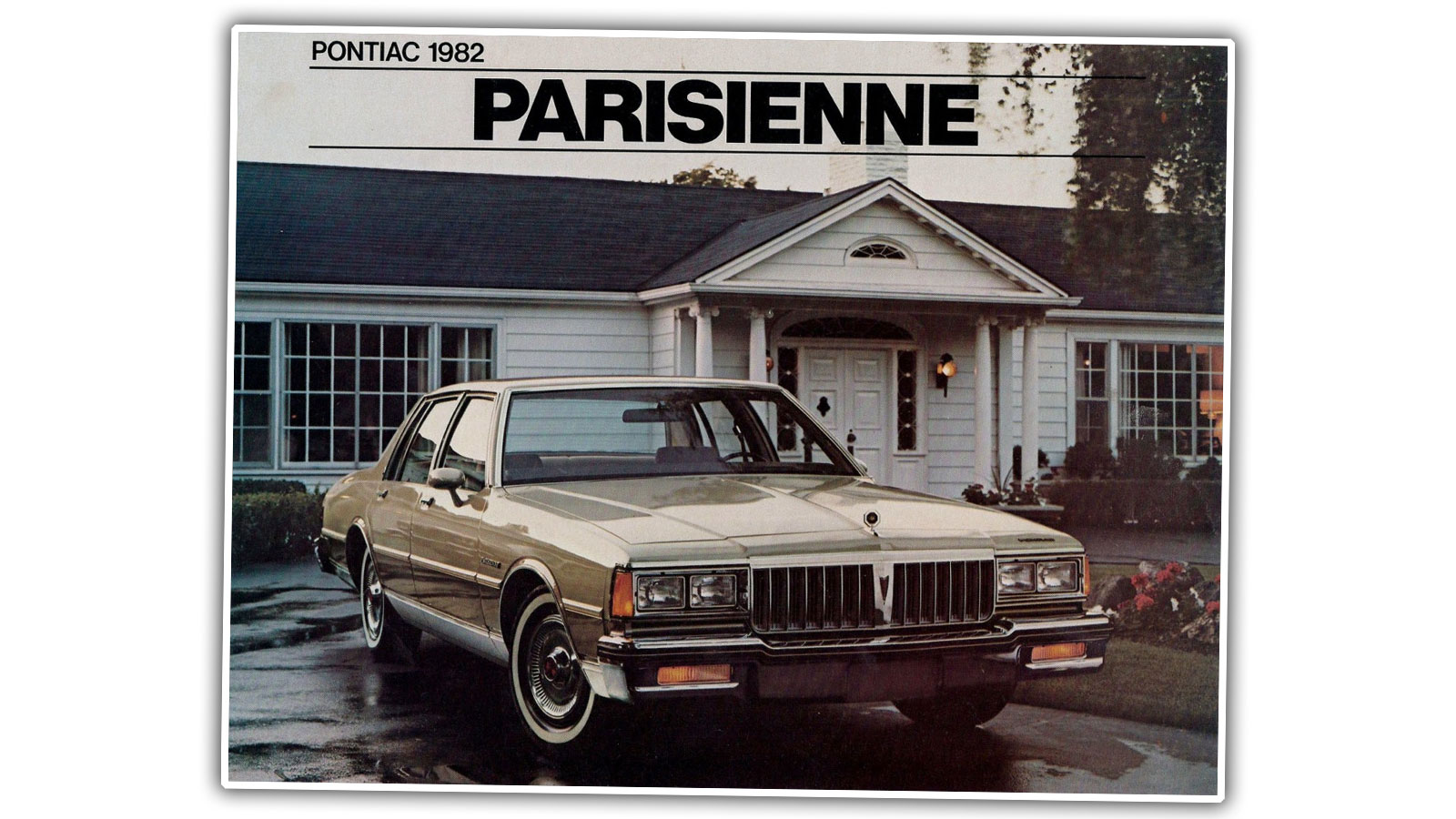 I’m not saying there’s anything inherently wrong with the Parisienne or any of GM’s other huge, sharp-cornered boats of that era, but I can’t think of anything that reminds me less of Paris or France or ancient Gaul or anything even remotely related to that than this car. 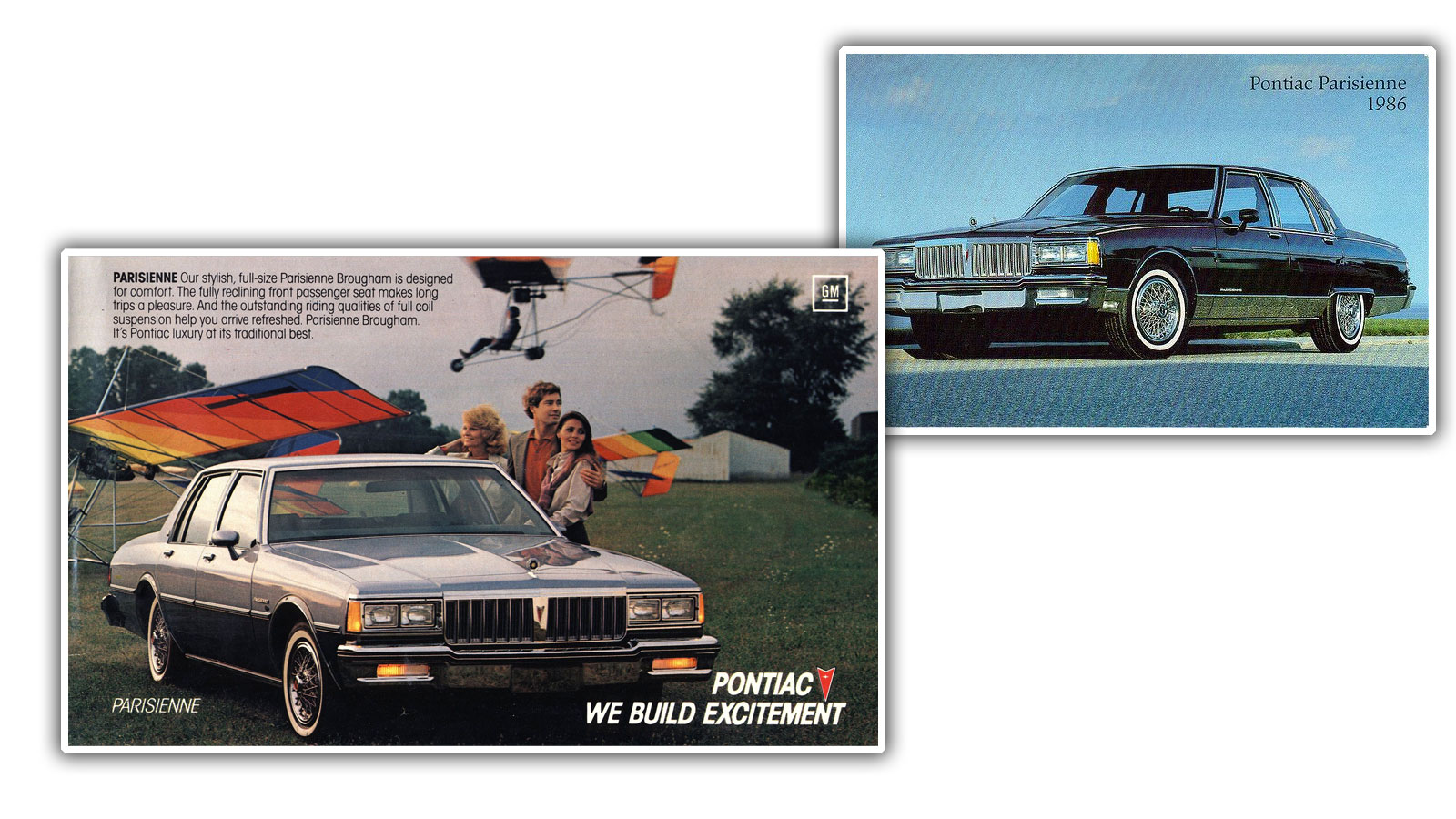 And it’s not like GM seemed to be going out of their way to push that association, either. If they had, I suspect they wouldn’t have decided to use NFL defensive tackle William “The Refrigerator” Perry of the Chicago Bears for this ad, as I’m pretty sure he wasn’t someone most Americans identified with Paris:

Can we talk about this ad for a moment? The Refrigerator seems so charming and just happy to be there, and I love how this commercial tells you precisely three things about the Pontiac Parisienne: it can come with a sunroof, it’s big, and when you open the door, the dome light turns on. You know, like a refrigerator.

I really hope there were at least some potential buyers out there for whom these were their three big questions that needed answering before pulling the trigger on buying a big new Pontiac.

There is at least one other mass-produced and sold car that bore the name Parisienne, and it is very, very French. 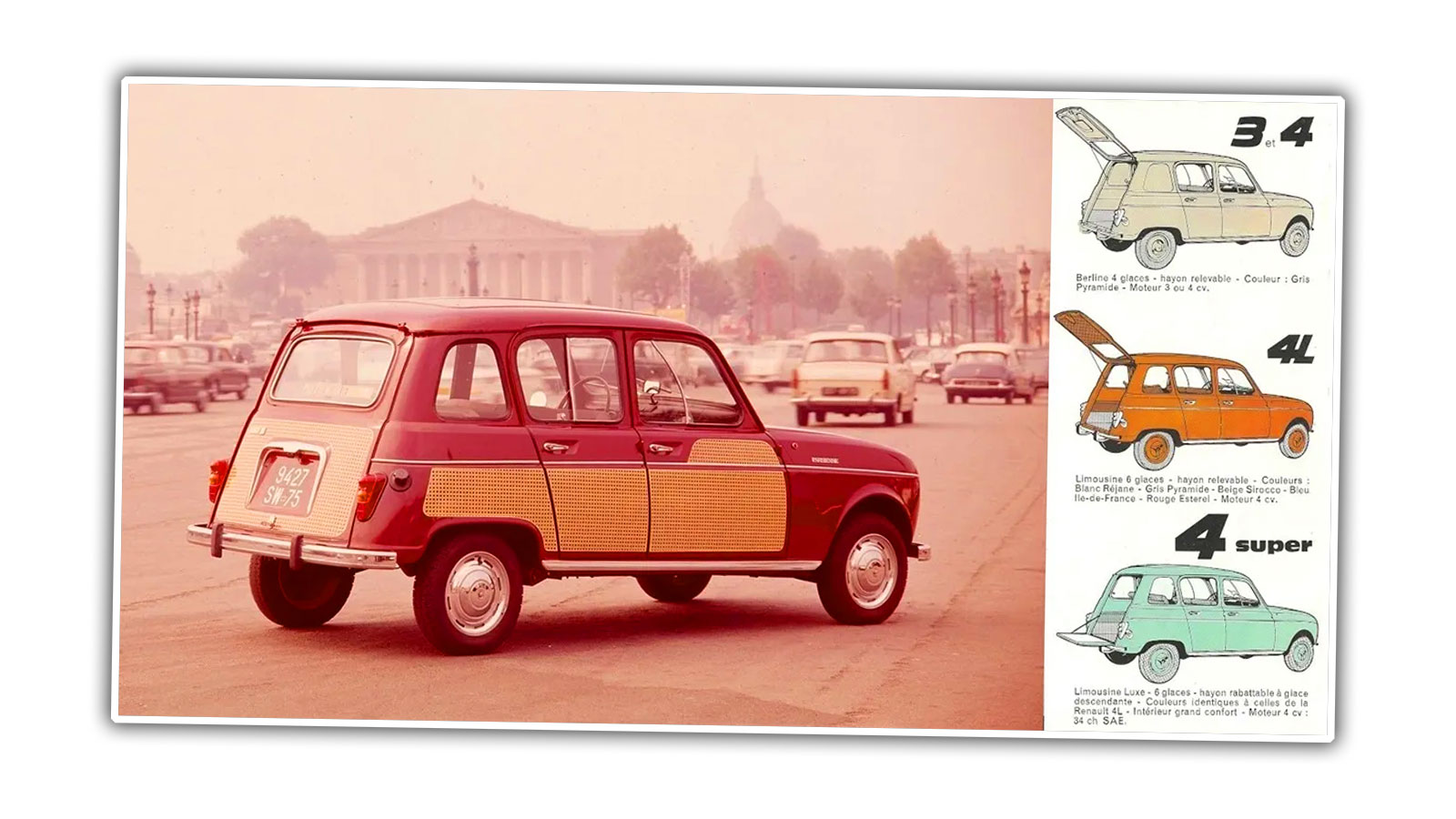 The Renault 4 Parisienne was developed very specifically for its namesake: Parisian women. To sell more cars to women, Renault teamed up with the fashion magazine Elle in July 1963 where over 4,000 Elle readers got to spend 48 hours with a new, specially “feminized” Renault 4, with glossy black paint and special hand-painted caning designs on the side or a tartan plaid. 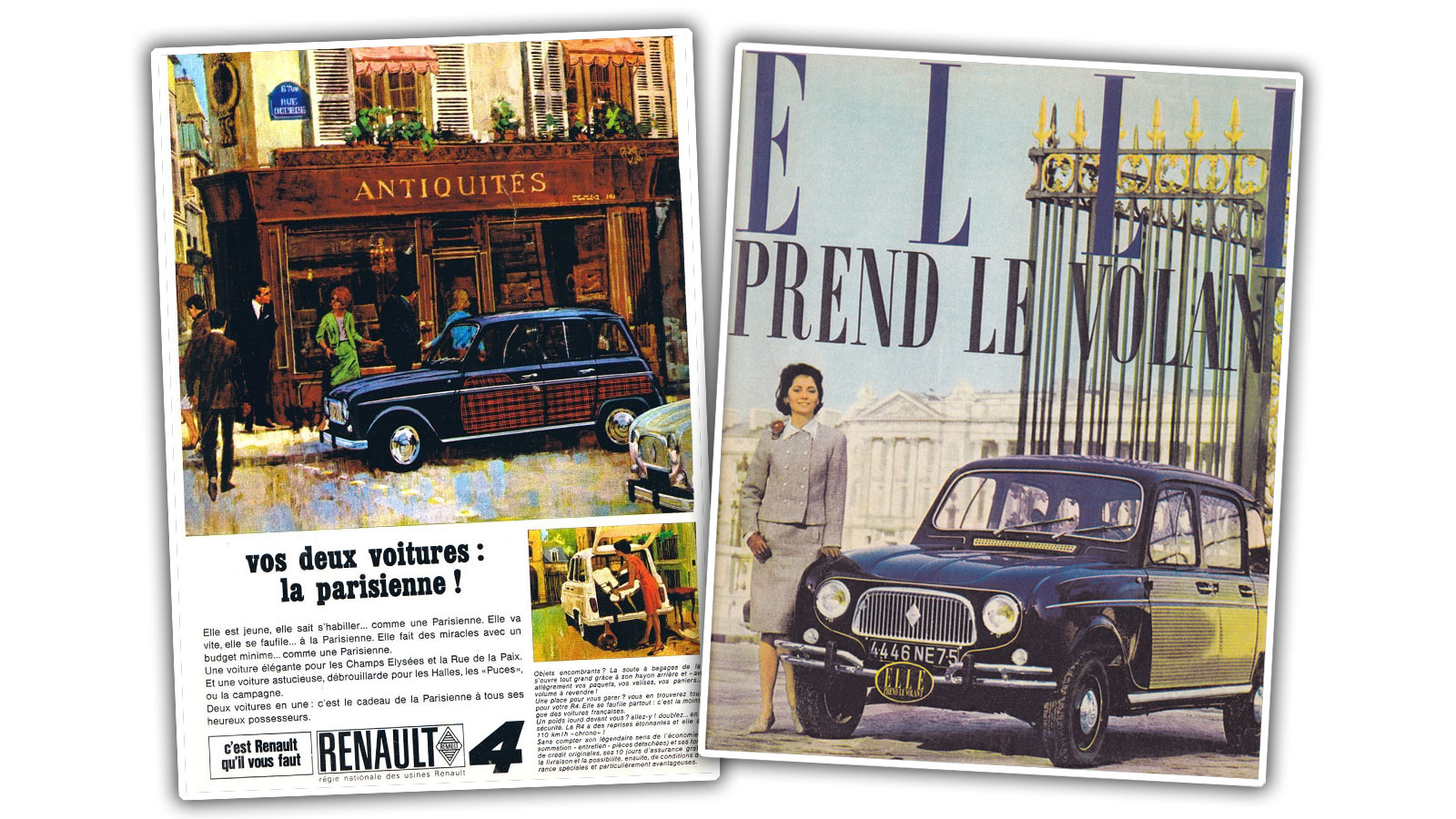 Response was so good from this experiment that the Renault 4 Parisienne became its own model within the R4 range, and would be sold from 1964 to 1968. 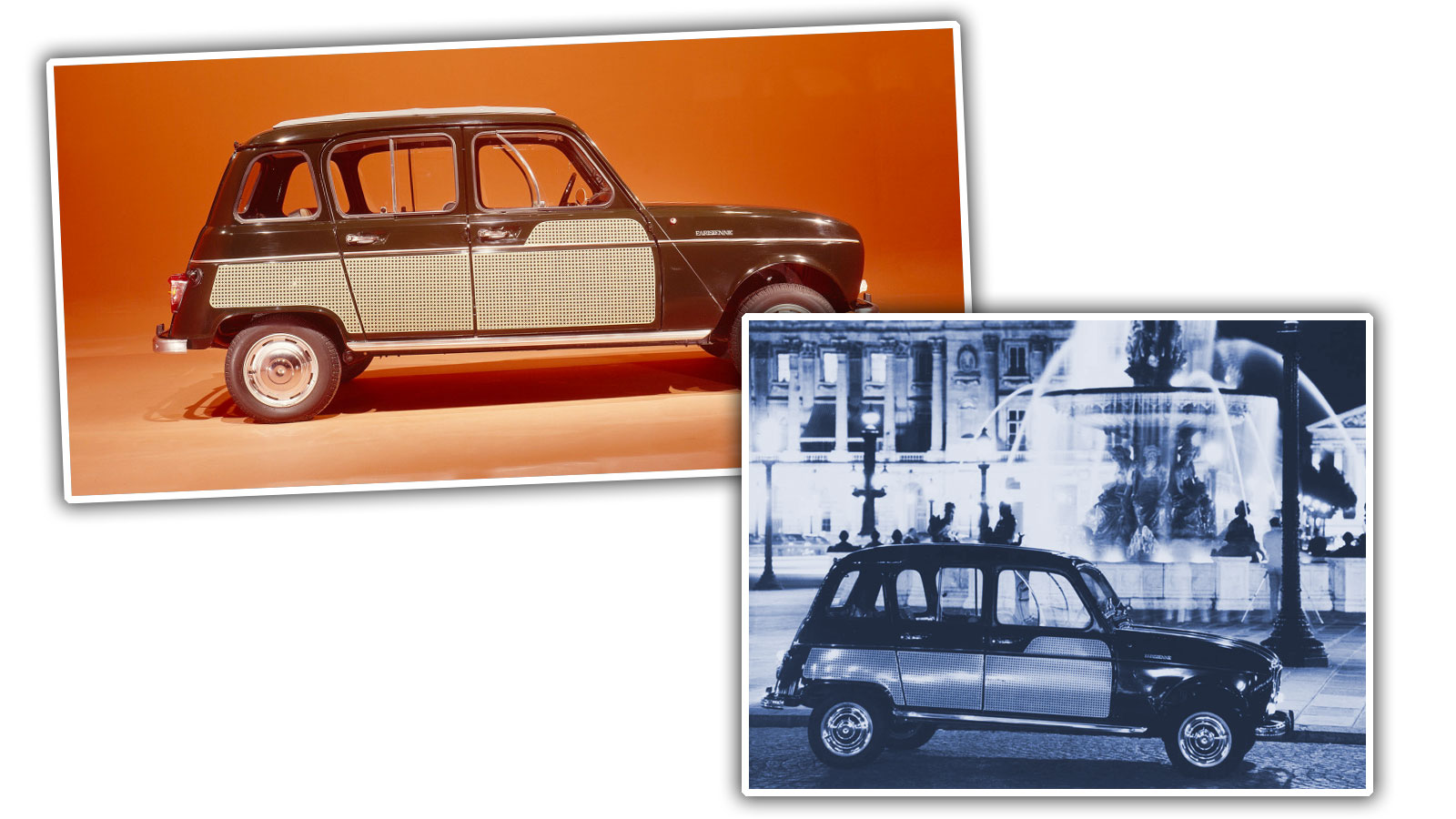 The Renault 4 Parisienne is about as literal a translation of the concept of a “Parisienne” from human form into automotive form as you can possibly get. It was created specifically for Parisiennes, based on what Parisiennes wanted, and designed to evoke the style and image of Parisiennes wherever it ended up.

The only other car named Parisienne is about as French as a fast-food french fry. How often do you find commonly named things this far apart in, well, everything? Walt Disney and Walt Whitman, maybe. It’s just too good. So, with that in mind, I propose utilizing this wonderful confluence for something interesting.

I’m proposing a new sort of scale we can use to make expressing a complex concept more effective. It’ll be called The Parisienne Scale, and the scale goes from Pontiac to Renault. It’s a scale used to determine how successful something is at living up to its name, and if it’s at 100 Pontiacs on the scale, it’s terrible at it, and if it’s at 100 Renaults, it’s amazing.

Polaroid is still around, but I’d say it only scores about a 30 Pontiacs when it comes to living up to the Polaroid name, because back in the day Polaroid was the only option for instant photos, and now they’re just another bit player in the photography and printing space, with little to distinguish them. On the other hand and used in a slightly different, but still valid context, the product Goo-Gone scores like a 90 Renaults, because it definitely lives up to its name and makes goo, you know, absent.

That guy who the QAnon people think is the not-dead JFK Junior? He’s scoring like 95 Pontiacs. Elephant seals? I think they deserve like 55 Renaults, they pretty well live up to the elephant part of the name.

This is useful, isn’t it? It’s just what you needed, I bet! Now go forth and spread this innovation, and rate everything with a name on the Parisienne Scale!

I'm a co-founder of the Autopian, the site you're on RIGHT NOW! I'm here to talk to you about taillights until you cry and beg me to stop, which I absolutely will not. Sorry. Hug? Also, David's friend.
Read All My Posts »
PrevPreviousRV Quality Has Gotten So Bad That $62,800 Buys You A Camper With Broken Safety Equipment
NextCoffee-Table Books, Burned Wiring, and Mediocre Pizza: Thoughts On British Car OwnershipNext