I’ve been thinking a lot about the Ford Maverick lately and finally got my hands on one so I could undertake an important car mission: Convince my family to swap our trusty Subaru Forester for a Maverick. Below is a rundown of all the arguments I made and how they were received.

Just to clarify from the start: I am not anti-crossover. Crossovers are great. I will probably need to write a “defense of crossovers” post here because, like Coldplay or hotel breakfasts, they’re maligned far out of proportion to their usefulness or occasional unpleasantness. [Editor’s Note: Crossovers are like wagons, except top-heavier and less efficient. In my eyes, if they aren’t good off-road, they compromise too much for ground clearance/a high H-point that nobody needs. But I’m not anti-any type of car, because I know that people love sitting up high just for the sake of it. -DT]

Our Subaru Forester is a 2016 in Premium trim with the 2.5-liter naturally aspirated boxer four and CVT. For that generation of crossovers I think it’s the best option, balancing out value, capability, and space. It’s been with us since my daughter was only a few months old and has gotten through her jam hands stage remarkably well. Its main downsides are: A CVT transmission I don’t particularly love, worse-than-expected fuel mileage for short trips around town, boring silver paint, and a terrible infotainment system with no Apple CarPlay.

Would trading a Forester for a Maverick solve any of these problems? It would solve some of them and, potentially, make new ones. But I’m enamored with the small truck and want a shiny new toy so I went hard in arguing for it.

Just to provide some detail: I’m waiting for Ford to hopefully announce a plug-in hybrid AWD version or, at least, a non plug-in AWD hybrid version. Just to keep consistent, I’m going to assume we’d buy a Hybrid in XLT with the XLT Luxury Package. 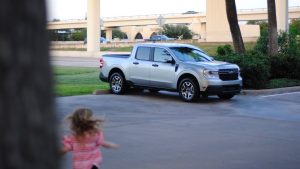 This is the easiest argument to make. My Forester, stock, gets 24 mpg city and 32 mpg highway. Every route to my daughter’s school or my wife’s work requires meeting, at minimum, five stoplights or stop signs. In reality, there are often more stops. It’s a punishing trip and it means we are lucky to touch 21 mpg regularly.

You realize the maximum efficiency (in terms of fuel usage) from the Maverick hybrid at lower speeds where the electric motor is doing all or most of the work of moving the vehicle, which is why it gets 42 mpg city, 33 mpg highway. In practice, people on the Maverick Truck Club forums report even better mileage. I assume my highway mileage will be comparable, as the Forester has been in the 31-33 mpg range on most highway trips.

There’s also the smug satisfaction of being better for the environment. 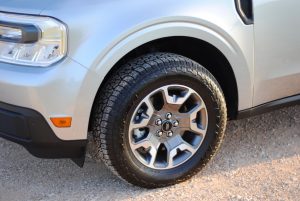 Oh the asterisks. The Maverick is an incredible value in theory. As optioned, an XLT Hybrid with the XLT Luxury Package, a factory soft-folding bed cover, and manual sliding rear window is $28,565 after destination charges. Assuming I’d just replace my current Forester with another Forester, a new one with the Premium package and the addition of rear-seat UBS chargers and the rear seatback protector is $30,427, delivered.

Apples-to-apples I think the Maverick has more of the features I want with the Luxury Package. Over six years of ownership, I’d save more than $5,000 just on relative MSRP and fuel savings. 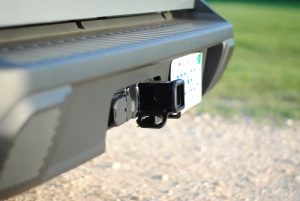 *In reality, currently, the MSRP of everything is up. Subaru has the tightest supplies at the moment and two dealers I called didn’t even have Foresters to sell. The Maverick might even be in more demand. I’m not going to be making this transaction soon, so hopefully this will settle down over time.

**I’d like to get an AWD version if I can’t get a plug-in AWD hybrid and those, likely, will put it at the same price point.

***All of that money I save will be used on truck accessories. I’m not dumb.

****It’s way cheaper to just keep the car we have.

[Editor’s Note: Personally, I think a base $20,000 Maverick, if you could find one, is one of the greatest deals in recent automotive history. -DT]. 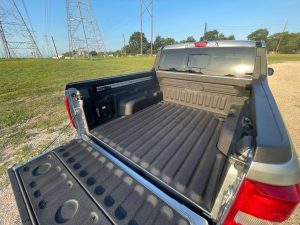 It’s a truck! We live in a city! Try not to imagine all the contradictions contained within those two statements and instead think of all the things we can, but almost certainly will not, move. Put in your mind grapes he sheer joy I will experience at slowly and methodically optimizing the storage.

As mentioned above, I am planning to get a soft tonneau cover so that I can use the truck bed as my own, giant, washable trunk. The Forester swallows an impressive 34.4 cubic feet of stuff with the seats all the way up which, with a kid, they almost always are. If I’m making a solo Ikea run I can transport 74.7 cubic feet.

The bed of the Maverick is 54.4 long and 53.3 inches wide and provides roughly 33.3 cubic feet of storage. While this is slightly below what the Forester has, the reality is I don’t love stuffing it like a turducken to the roof so I’d give the Maverick the edge here.

Plus, with Ford’s FlexBed system I can create an amazing setup for every day life that keeps my camping chairs and the tools I travel with in a compartment nearest the cabin. I’ll mark off the middle section for stuff I semi-regularly carry, like coolers and my daughter’s cooler. The section closest to the tailgate will be marked off for groceries (except in the hottest months) and other day-to-day items. 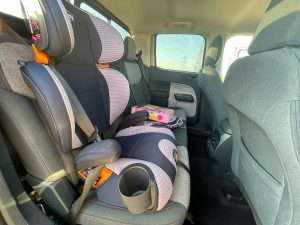 For camping, I’ll have a completely different setup, which is going to allow for both excellent storage of our tents/sleeping bags and a tailgate cooking solution using my small camp stove and the 110 outlet built into the rear of the bed.

Finally, one cannot own a Forester or Maverick too long without wanting to buy a damn kayak. It’s as inevitable as the dawn or me joining Facebook groups for cars I don’t even own. You can definitely fit a kayak comfortably on a Forester, but I’ve got a whole plan for how to build a rail system to run the kayak/s so it extends over the roof and stays mostly within the dimensions of the vehicle itself.

ARGUMENT FOUR: WE GAIN A LOT OF FEATURES WE WANT

The Forester has bluetooth audio, it works fine. I would much rather have Apple CarPlay, which just makes life easier and gives me navigation and a host of other apps far out of reach out Subaru’s clunky, distracting system. It’s not worth buying a new car for, but it’s nice.

We can also get a real color! The new Foresters have a red color and a green color that are too muted to be fun, so even if we wanted to replace our silver (technically “ice blue”) model with a newer one we don’t have much choice. We can get a Maverick in Cyber Orange or Velocity Blue. These definitely stand out. I sort of wish that the steel wheels were an option on the XLT trim, but I’d definitely get a set for winter tires.

The XLT Luxury Package also adds a rear 400W/110v invert with an outlet in the rear seat (+USB) and another outlet in the bed. These two items have the potential to nicely improve my camping setup and assist with all the powered items a modern 6-year-old demands.

The final perk is the wired trailer hitch. The Forester has a towing capacity of 1,500 pounds, The XLT Hybrid is rated only for 2000 pounds, but that’s already a big improvement and adds the potential of getting some more interesting towable campers.

ARGUMENT FIVE: IT’S NOT THAT DIFFERENT 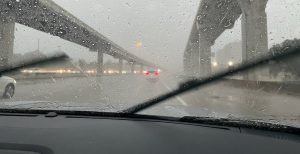 My wife, also being a native Texan, has owned a pickup. When we first started dating in college she had a ’90s Dodge Ram short bed/single cab with the Magnum V6. Ride and handling was about what you’d expect.

The Maverick is a unibody mini-truck that’s based on a crossover, and in a week of driving the EcoBoost model around Houston it didn’t feel that distinguishable from the Forester. The ride was every so slightly worse, but if you compare Car and Driver skidpad numbers the XL Hybrid and Forester the Maverick actually performs better (.81 g to .78 g). There are a lot of variables here, but the low center of gravity has to help.

What I think ultimately sold it for the family was a moment near the end of our trip when we hit one of those ferocious gullywashers that plague Houston commutes and found ourselves in what felt like a scene from the film Twister, sans the J-10 Honcho (sorry David).

Faced with water a few inches deep, gusty winds, and limited visibility the Maverick barely flinched. Would the Forester have also been fine? Absolutely (in fact, the Forester has slightly higher ground clearance). But the storm washed away any lingering feelings the family had that the Maverick would come with any significantly reduced dynamic capability.

I have driven literally hundreds of different cars over the last decade of doing this and, for the most part, the cars I drive go unnoticed, with two major exceptions: I once had a woman jump out of her car to take a picture of the Veyron Vitesse I was driving [Editor’s Note: Weird flex, but OK. -DT] and I’m fairly certain I caused a very low-speed fender bender when a man in traffic tried to take a photo of the Polestar 1 I was in and didn’t notice traffic in front of him had stopped.

Do people notice the Maverick? Hell yes they do. I definitely noticed people slowing down in traffic to take a look, pausing a moment to look inside as they walk across the parking lot. When driving to return the truck there was a Chevy Astro van with a ladder tied to the roof and the driver kept slowing down to pace me until, finally, I caught his eye and he gave me an enthusiastic thumbs up. [Editor’s Note: Wait until supply chain woes clean up, and these will be everywhere. Before you know it, people will stop noticing. -DT] 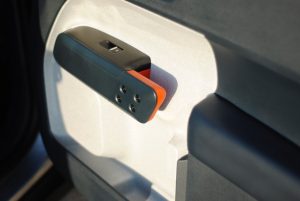 Not everyone will care, but for people who do care, the Maverick is cool. As Kath and Kim might say: It’s nice, it’s different, it’s unusual.

The textured cloth seats are great. The orange touches on the inside are interesting. Everyone in the family loved the random cubbies everywhere. It’s not a lot of truck for a truck, but it’s a lot of design and thought for anything under $30k.

How well did this argument do? 1/10 “Just for the Kath and Kim reference”

I’m not likely to buy a truck now, when the prices are so high and the inventory so low. I’m also still holding out for an AWD hybrid option. Once that becomes available? I’ll probably put down a deposit and see if anything else catches my eye before it is finally built.

[Full disclosure: Ford let me borrow this car for a week and gave it to me with a full tank of gas and an understanding that I might not give it back. I had to go to LA, though, so I did.]

Howdy! I'm the Publisher of The Autopian which means I'm to blame for at least a small part of this. I used to run another car site and then made movies and TV shows. Now I'm here to convince you to buy a Peugeot.
Read All My Posts »
PrevPreviousFord Might Kill The U.S.-Market Transit Connect In 2023, Marking A Turning Point For Small Vans In America
NextThe Dodge Li’l Red Express Truck Tried To Make A Comeback In The 1990s As A DakotaNext