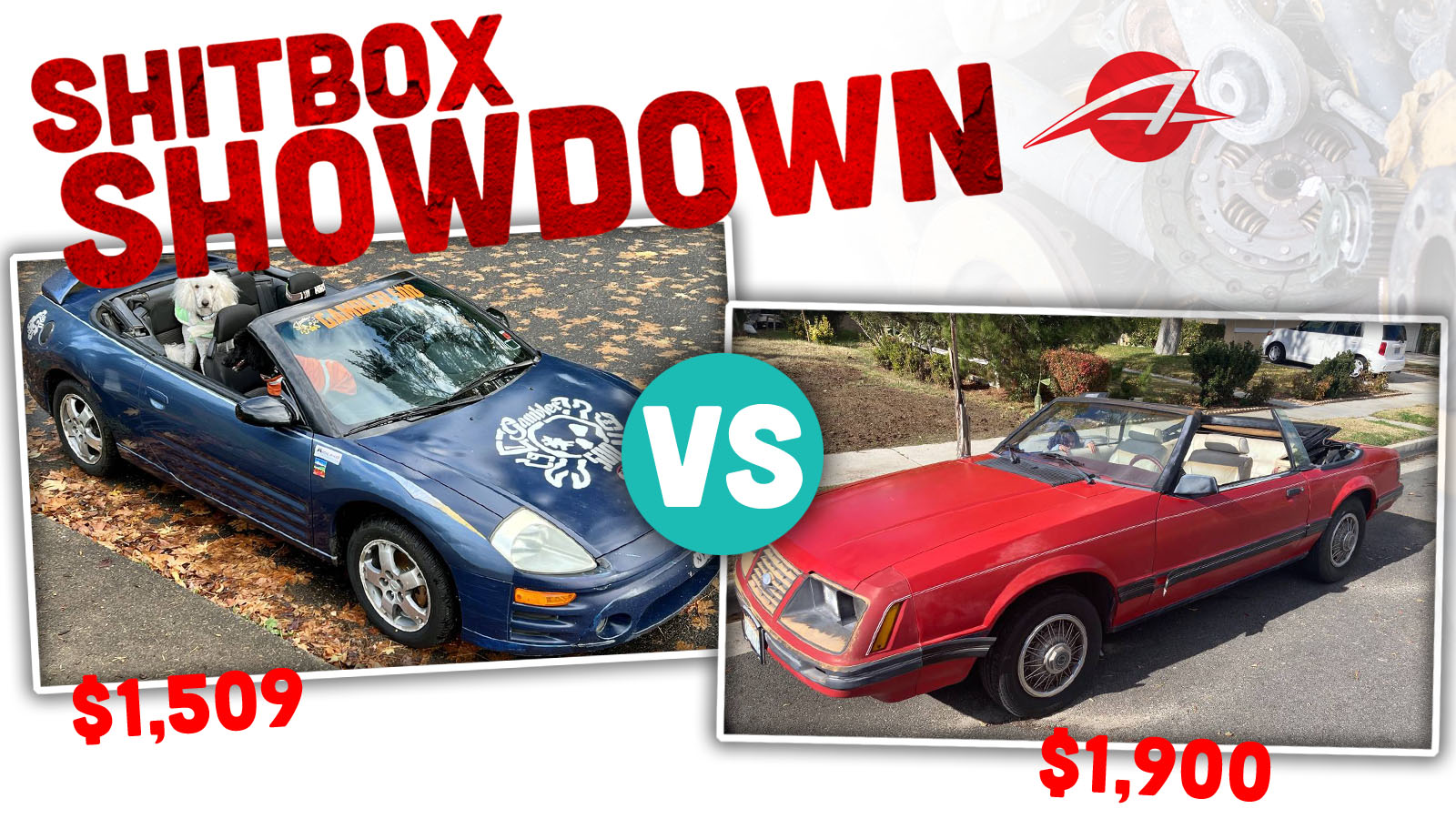 Welcome back to another edition of Shitbox Showdown! It’s June 1st, which means that summer is right around the corner. (Okay, not right around the corner; it’s like ten blocks up, then turn right at the Del Taco. You can’t miss it.) So today, we’re going to take a look at a pair of highly questionable convertibles. But first let’s see who won our van battle:

Close one, but I’m calling it: the old Dodge is our winner. David’s right; this van has a good face, with those big round headlights. To me, it looks a little like the old retired guy who hangs out at the hardware store “helping” customers even though he doesn’t work there. (Not that I’m knocking that guy; quite the contrary, I hope to be him someday.)

Convertibles are sort of a love-them-or-hate-them vehicle. And that attitude can change from one drive to the next: sunny day (or better yet, warm clear evening), top down, good song on the radio? Heaven. Parking in a sketchy neighborhood and trying to decide whether or not to lock the doors, so some jackass doesn’t slice open the top just to find out there’s nothing in it worth stealing? Not as much fun.

Still, I am of the opinion that everyone should own a convertible at least once. It’s a unique form of motoring, and one well worth the effort, at least for a while. Are either of these two worth the effort? Well, let’s see. 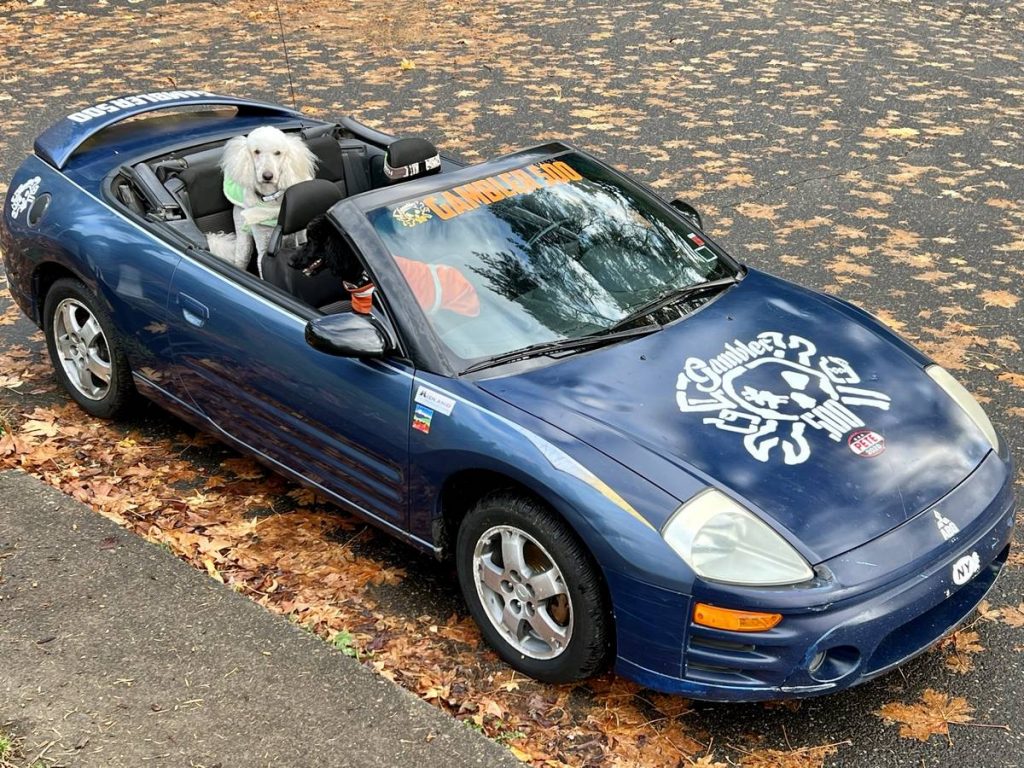 The third-generation Mitsubishi Eclipse, let’s be honest, let itself go. It’s not really a whole lot bigger or heavier than the previous generation, but it sure looks it. It also lost the turbocharged engine and all-wheel-drive systems that were available previously. You could say it went from fast and furious to… well, fat and spurious. 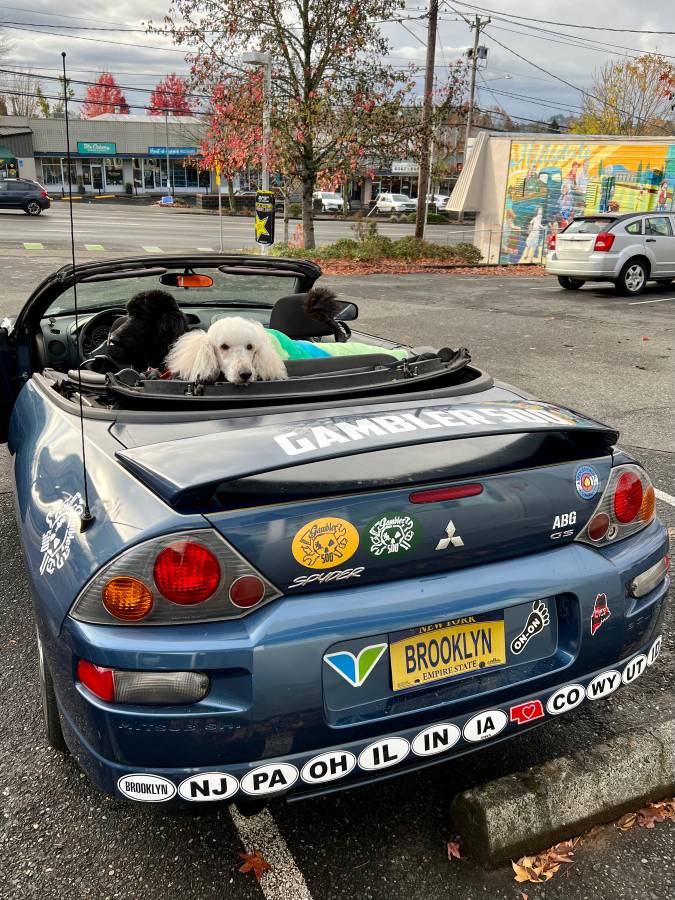 This example looks to have attempted to claw back some street cred by going everywhere, including off the beaten path. Either this car participated in a Gambler 500 event, or the owner is a big fan. (I’m assuming it’s the former.) That’s a lot to ask of a convertible made from a coupe, which are usually not the stiffest structures around, but I get the feeling the owner really loves and trusts this car, and just isn’t afraid to use it. A list of recent maintenance items in the ad is encouraging as well. 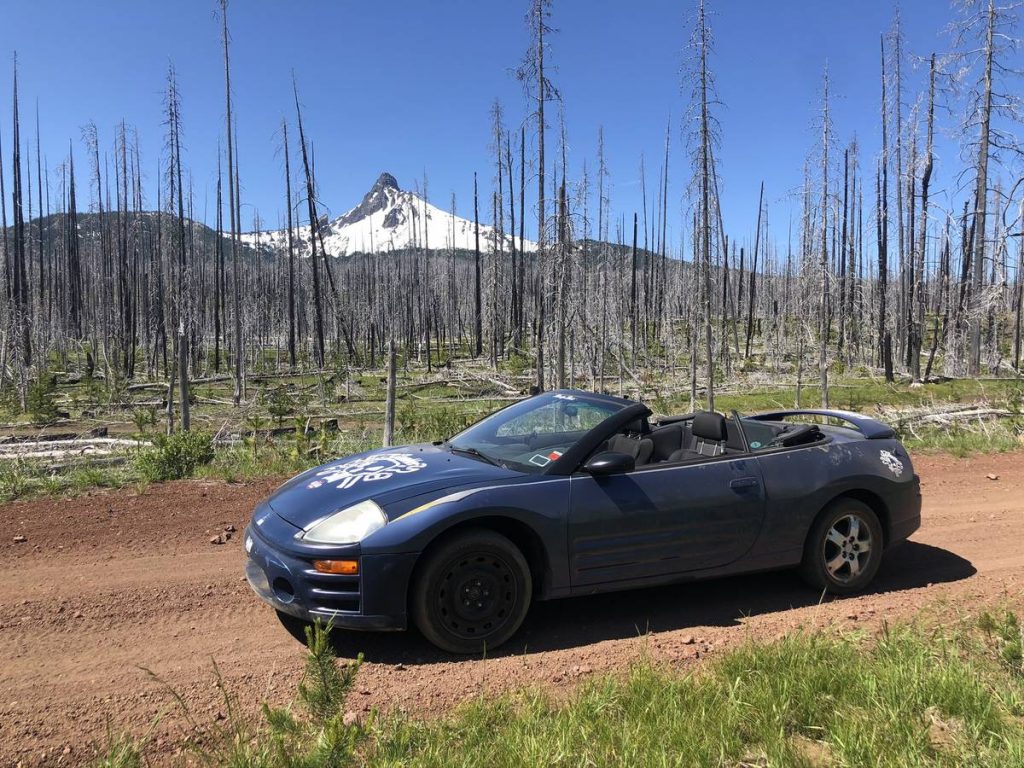 Beyond its mechanical condition, there is the question of aesthetics: I would guess that some potential owners would want to remove the giant decals and all those bumper stickers. Or maybe not; you could always make this your Gambler car, if you were so inclined. 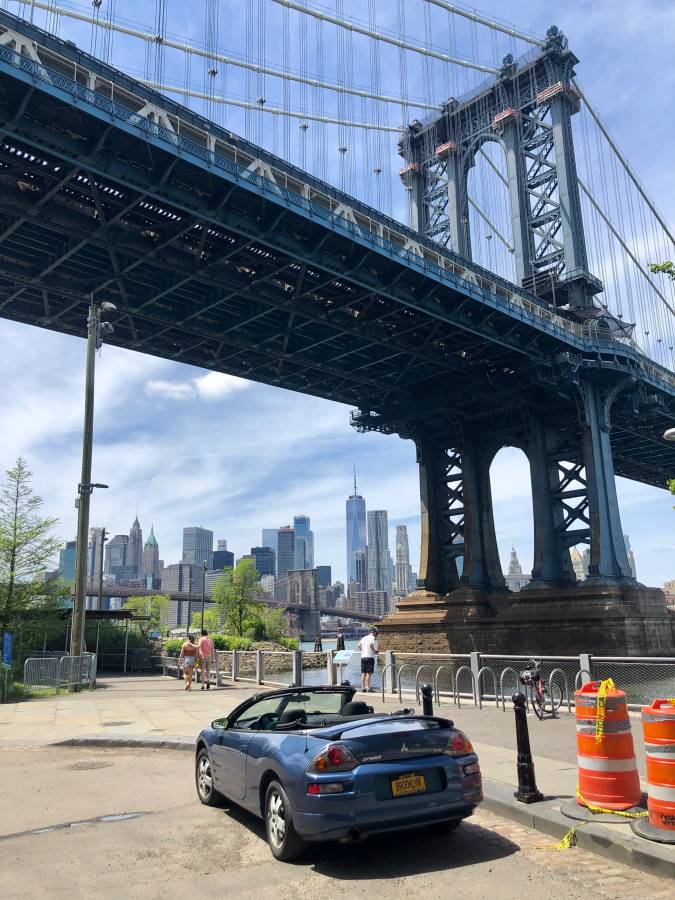 Or you could clean it up, ignore the inevitable rattles that have developed in the dash, and road-trip it. It’s clearly up to long drives. 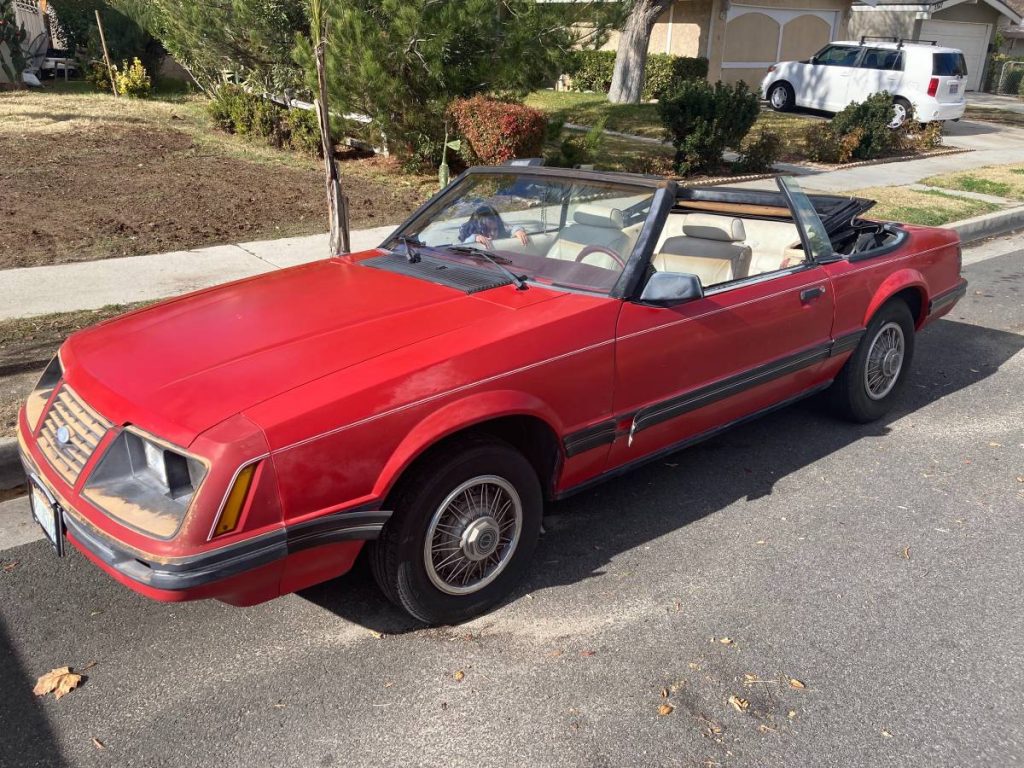 I hear you. It’s a convertible, which is about as structurally rigid as a duffel bag. It’s an automatic, which, ew. And it has that wheezy carbureted Essex V6 under the hood. A far cry from the LX 5.0 5-speed notchbacks that everyone in my generation either had or wanted. 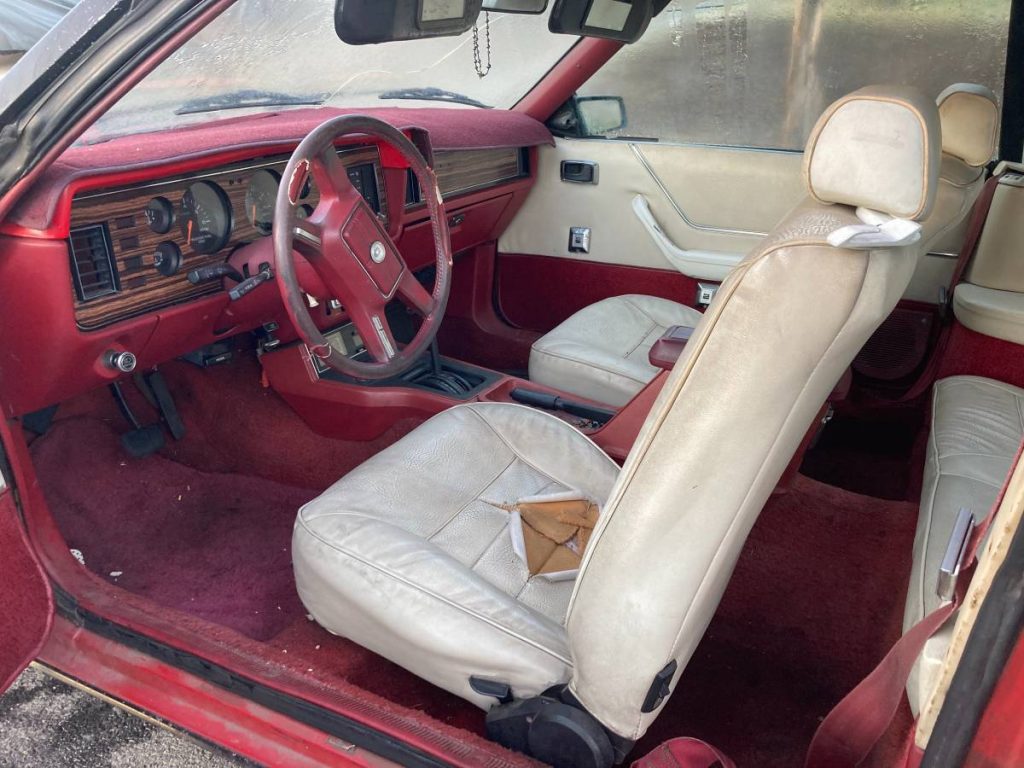 Even worse, it’s an early 1980s Ford, and as much as they liked to say “Quality Is Job One,” really it was more like Job Seventeen, at least on Wednesday afternoons after a good lunch. Yes, the side trim is actually peeling off this car. It’s one of the things that makes me think the 35,000 miles is original. If it were 135,000, that trim would be long gone. 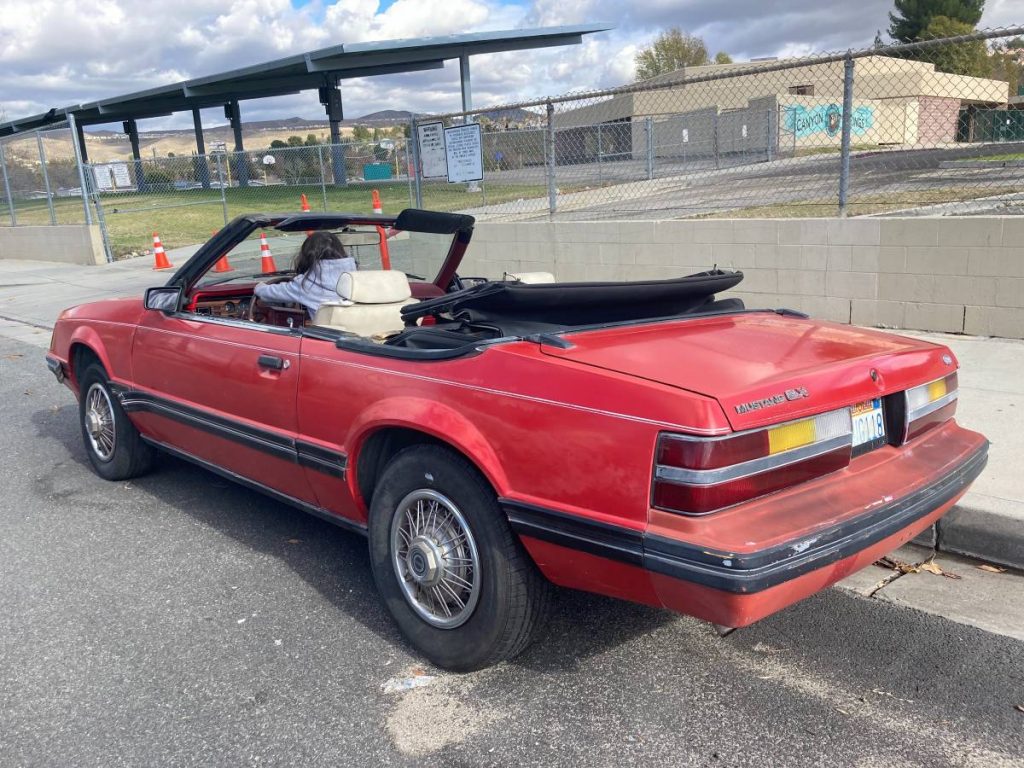 Which is a shame, because I like the looks of this era Mustang. And I bet the white seats were pretty sharp-looking, for a couple weeks in 1983. Mechanically, it could use a little help: the engine is said to run well, but the transmission, an old-school three-speed automatic, “needs work,” along with the brakes, but brakes are easy. The transmission could be nothing, or it could be a junkyard dive for a replacement. 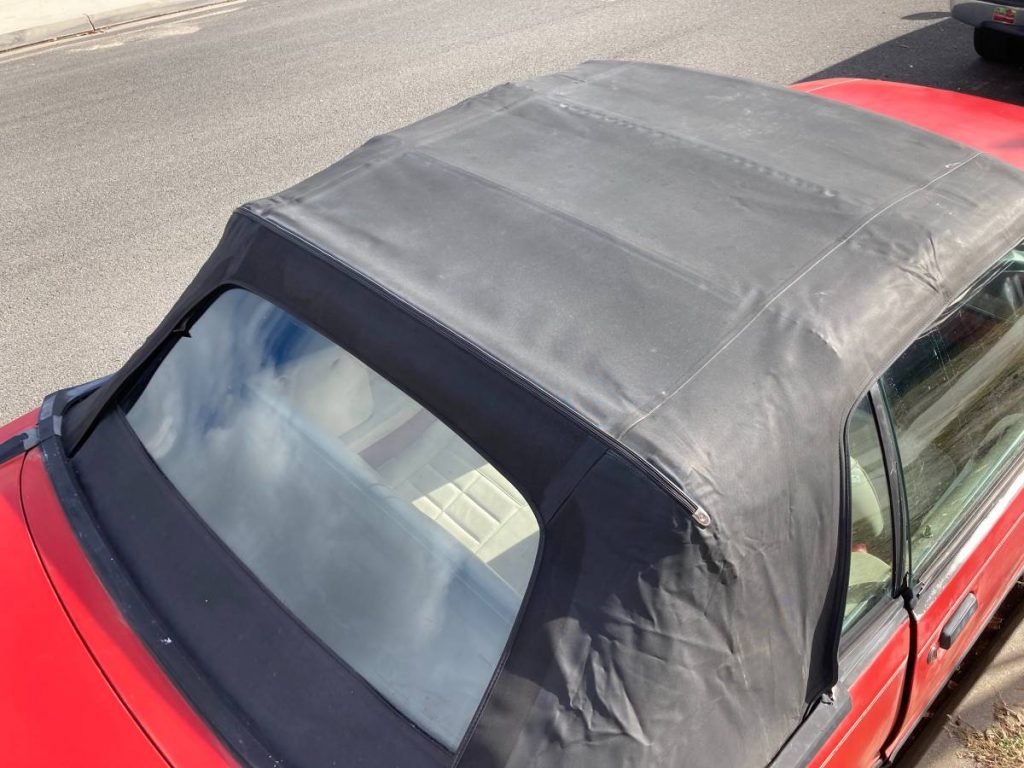 At least the top looks intact. And you can actually see through the rear window.

And there you have them: a has-been sports car that has been shaken half to death on gravel roads, or a disheveled pony car that wasn’t really any great shakes to begin with. What’ll it be?

Pacific Northwest-based self-taught DIYer of all the things. Current fleet: 1971 MGB GT, 1989 Chevy K1500, 2013 Chrysler 300C, 2003 Infiniti QX4, and 1966 Aristocrat Land Commander trailer. Not to mention about 40 RC cars and around 100 model kits...
Read All My Posts »
PrevPreviousCold Start: Reality Is Slippery Like An Oiled Snake
NextThe 2023 Toyota GR Corolla Morizo Edition Is A Lightweight Version Of The GR Corolla With No Rear Seats, No Rear Window Motors, And No Rear SpeakersNext