It’s always a special day in the automotive world when Ken Block and his band of merry Hoonigans drops a fresh Gymkhana video. For almost 14 years, Block and Co. has enthralled audiences with high-energy tire-slaying in a range of locations, from empty airstrips to shut down cities. For the latest video, things are a little bit different. Ken Block has gone electric. Like Dylan!

The premise of an electric Gymkhana car sounds pretty neat. Electric motors generate tons of torque, so glorious tire smoke is essentially guaranteed. Plus, it’s great seeing people prove that electric cars can very much be hooned. Upon first watch of Electrickhana though, I wasn’t completely enthralled. Something felt missing, so I went back and re-watched Electrikhana and various Gymkhana videos to figure out why.

Let’s compare this latest Gymkhana to say, Vaughn Gittin Jr. demonstrating the capabilities of his Mustang Mach-E 1400. Setting aside the V8 rumbles of various Mustang coupes, the Mach-E 1400 makes its presence known with the obscene banshee shriek of its electric motors. It sounds like a Cuisinart on speed, and while not necessarily an objectively good sound, it’s exciting. In contrast, Electrikhana’s sound design tones down the electric motor whine and plays with it so it isn’t relentless. While it’s good for establishing camera position relative to the action, it doesn’t feel as visceral as the energy drink-fueled, open-up-this-pit sound design of previous Gymkhana videos. 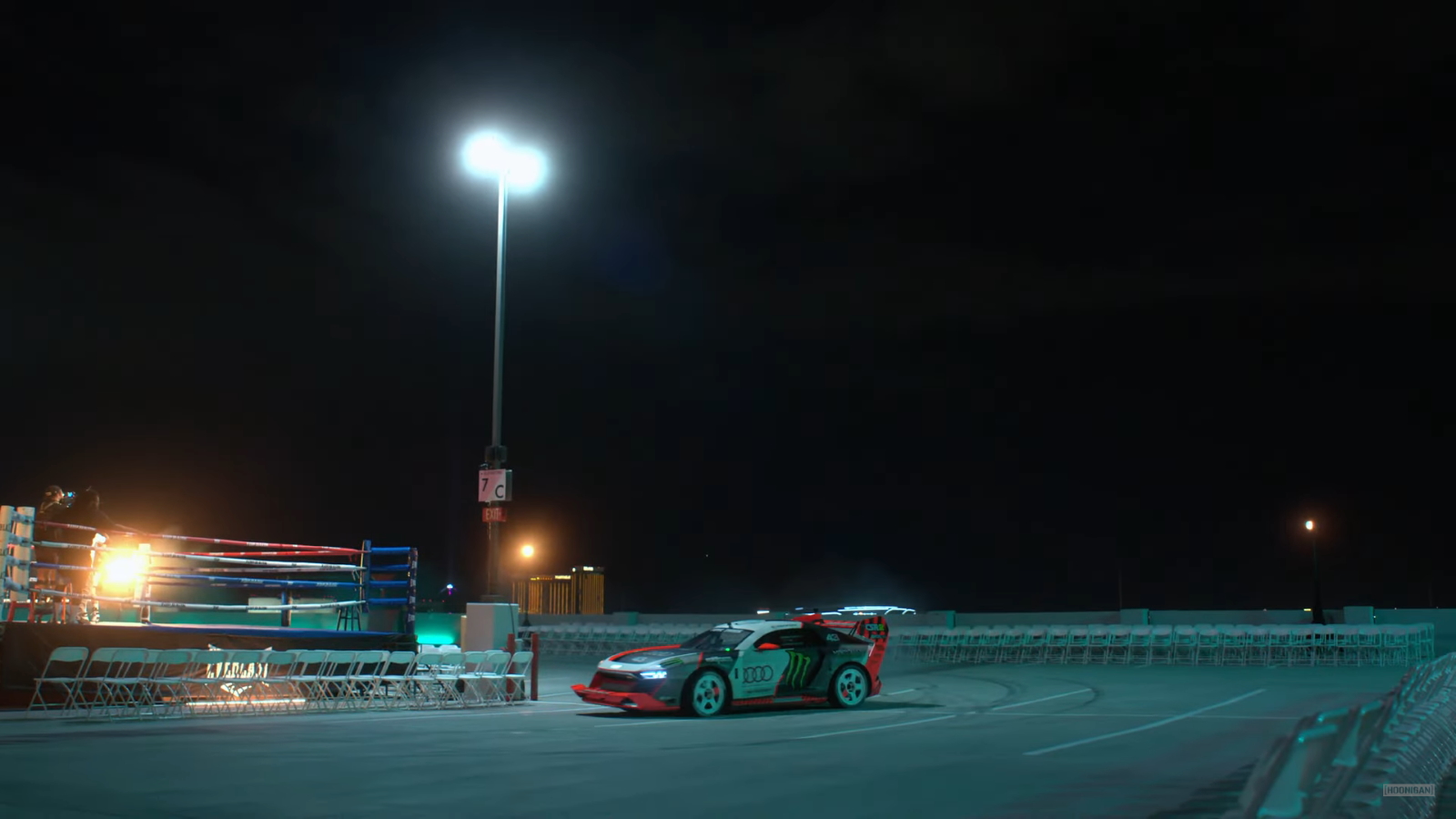 Next, there’s the issue of Las Vegas itself. Gymkhana often excels when it really showcases proximity. While Electrikhana has its high points like the donuts in the casino, the Vegas strip is wide, flat, segmented by medians, and generally a fairly boring venue. In several scenes, like the drone shot of the left turn across the intersection and the boxing gag, there’s just so much space that can’t be used practically that certain shots just aren’t hugely exciting. There’s so much tarmac in the intersection pictured below, yet Block and the gang can only use a small amount of it for this shot. In addition, the inky cover of night conceals true proximity to some objects like the parking structure, so it takes a few re-watches to really grasp how impressive Block’s driving is.

Aside from location limitations, there’s likely a good reason the Gymkhana crew didn’t always try to go for the hardest, tightest-proximity stuff possible. According to Hoonigan employee Zach Mertens, Block only had about an hour of seat time in the Hoonitron for the filming of Electrikhana, and limited seat time typically means a limited amount of comfort in a car and location. In several shots, you can see Block abruptly cut wheel speed to either correct a slide or line up for another stunt. Sliding an electric car can be tough because there’s no rev limiter to sit on to limit wheel speed, so the learning curve involved is a bit steep.

Despite the latest drop in the Gymkhana series not grabbing me from first glance, there’s still some great stuff going on. The backwards entry between the median strips is gnarly and the skid around one minute and 23 seconds in is absolutely disgusting in the best way. Bonus points to the heavy angle around the fake Arc de Triomphe and eyeball spin dryer shenanigans inside the casino. It’s also lovely to see all the race cars from Audi’s heritage collection, even if the promotion can seem a bit heavy-handed at times. Of equal importance, a mind-boggling amount of planning went into this production, from shutting down streets to talking with casinos to stitching far-apart roads together to look seamless. Shoutout to the producers, directors, and editors who pulled this massive endeavor off.

While Electrikhana may not be the most thrilling video in the Gymkhana series, the team did a great job given the location, limited seat time, and challenges of filming an EV. Making electric cars look and sound exciting on film is hard, just watch any Formula E car doing donuts for proof. However, with more seat time and a different location, I have a feeling the Gymkhana crew could make an EV just as exciting to watch as a combustion-powered car. Think of this latest video as a first glimpse at some excellent things to come, exactly like how the first Gymkhana video kicked off more than a decade of thrilling tire destruction.

Thomas is a Nu Rave-blaring, heel-toe downshifting, maple syrup-swilling, chassis-geeking, junkyard parts-hauling, floppy-haired scenester who's been writing about cars since college. His current ride is a 2006 BMW 325i with the six-speed manual gearbox. Instagram: @thomas.hundal Twitter: @thomashundal
Read All My Posts »
PrevPreviousHoly Grails: The South African BMW 745i Is The M7 BMW Never Gave The Rest Of The World
NextI’m Not Saying The Past Was Better But It Was More Butterscotch: Cold StartNext