Facebook-f Twitter Instagram Rss
Menu
Menu
Home » Here Are All The Interesting Old Cars Hidden In Toyota’s Texas HQ, Plus A Robot That Plays The Trumpet

Here Are All The Interesting Old Cars Hidden In Toyota’s Texas HQ, Plus A Robot That Plays The Trumpet 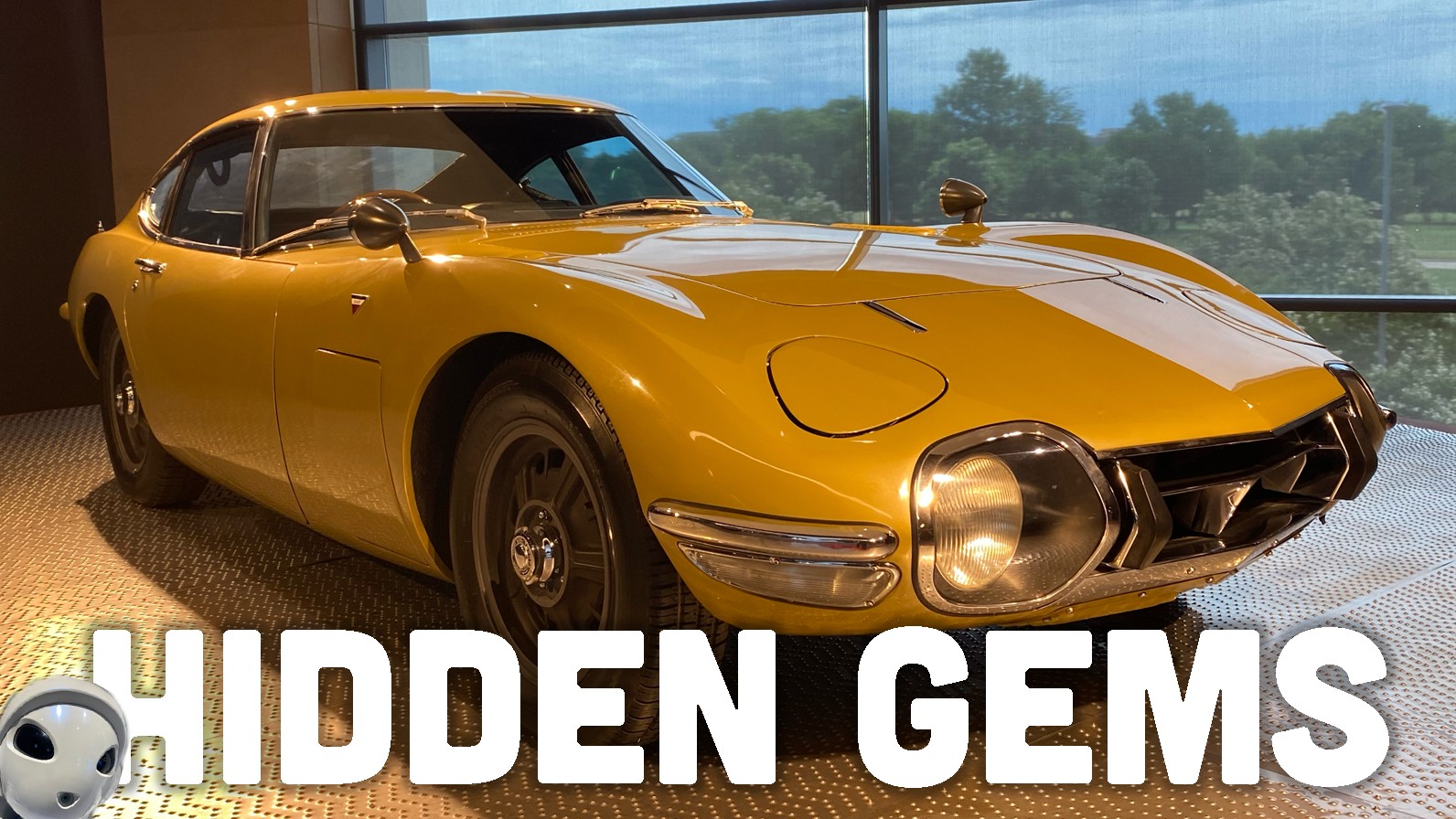 I’m here in the aching beauty of Plano, Texas, where Toyota plopped down its headquarters. The brand is showing me lots of Very Important new cars and technologies, but what I’ve been most excited to see are the few heritage collection cars stored in a little museum-like area here. Since you and I are so tight, I’m going to show you all the good stuff; consider yourself lucky, because the security team here at Toyota HQ assured me that otherwise there’s no way it would let you in the building, especially dressed like that.

Toyota has a larger heritage collection, various PR people assured me, so what we’re seeing here is a pretty small sampling. In a way, that makes the curatorial choices even more interesting, as you can see that Toyota is attempting to explain a bit of its history. So let’s see if we can get a sense of how Toyota sees itself via these cars.

First up we have this little charmer: 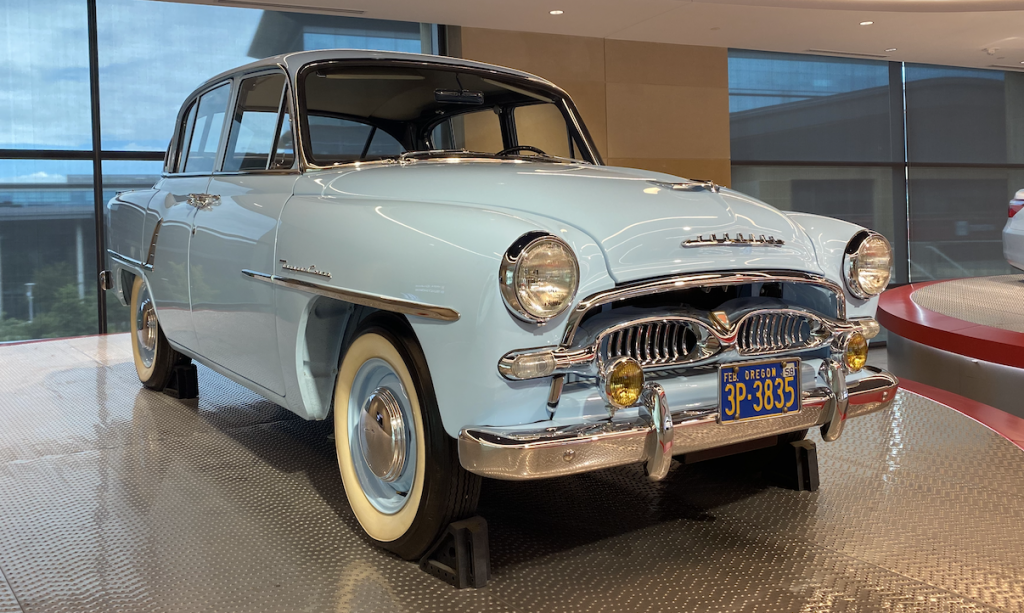 That’s a 1958 Toyopet Crown — an extremely important vehicle because this was the first Japanese car to be exported to America; what makes the story of this car so interesting is just how much of a failure it actually was in the USA.

The target of the Toyopet Crown was the iconic Volkswagen Beetle, which was the best-selling imported car in America and proved that a market for a small, fuel-efficient car actually did exist in the land of the colossal, thirsty, chrome-slathered land yachts built by the Big Three.

The Toyopet Crown was a car developed for Japan, for Japanese roads and speeds and people. As a quick glance at a globe will tell you, Japan isn’t America, and Toyota’s American sales director sensed this, saying of the Crown, “This thing is underpowered, overpriced and it won’t sell.”

He wasn’t wrong. The Crown shook like a man with boxer shorts full of bees at speeds of 60 mph or greater — a velocity that most drivers would rarely encounter in Japan at the time. Drive-in restaurant trays activated the horn, the name had both “toy” and “pet” in it (two words rarely used to sell cars), and the car was such a sales flop that Toyota exited the US market in defeat.

Until the brand came back with this next car: 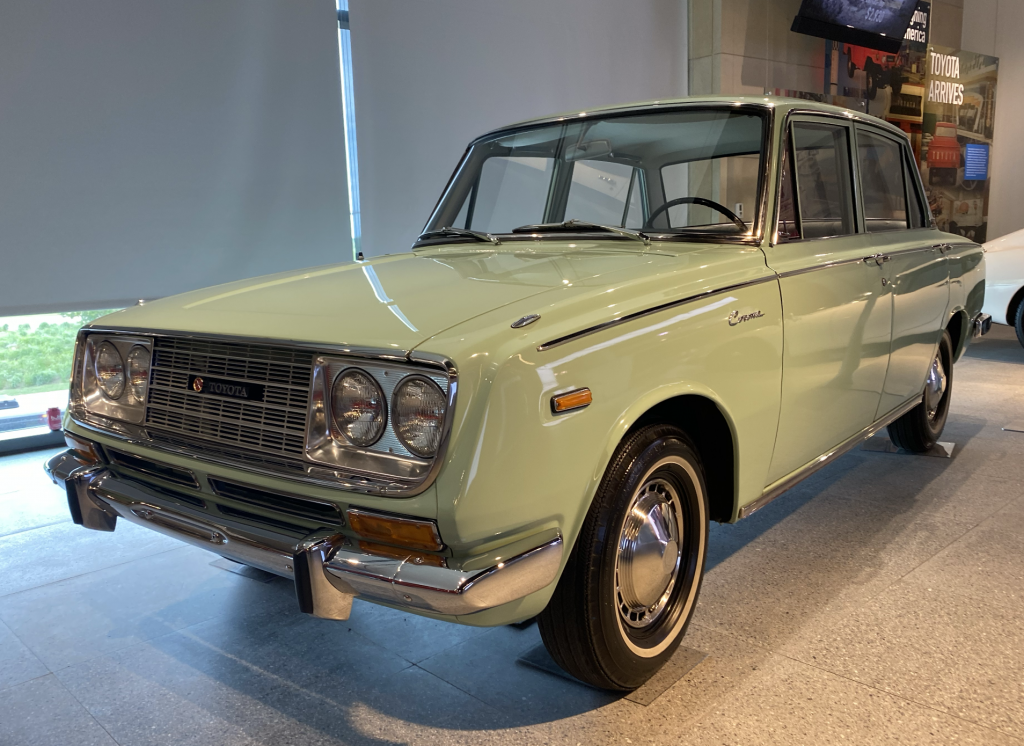 That’s a Toyota Corona, and it’s the vehicle that lifted Toyota back up in the American market in 1965. This was the third generation of Corona, and this one was far more suited for U.S. roads. This was a small but roomy car, and with its 90 horsepower engine had a good amount of power.

The boxy styling with a tall greenhouse and plenty of glass area made for an appealing and efficient package; this was Toyota’s first car to sell over 10,000 units. 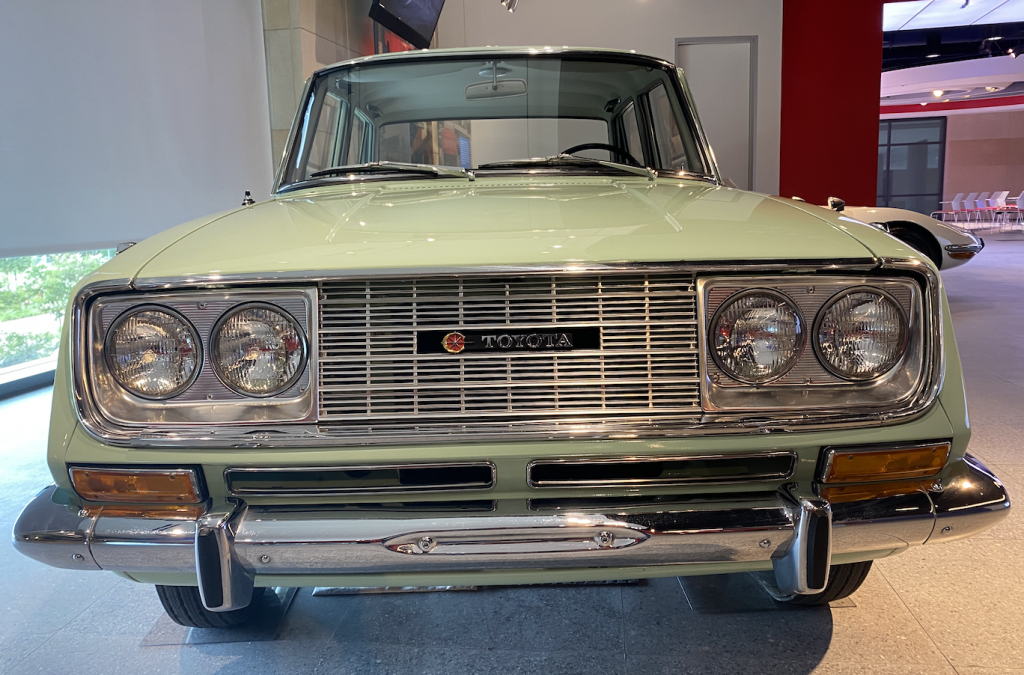 I’ve always like the design of these, because they remind me a bit of Lancias of the era, with their unashamed upright boxiness and elegant thin pillars and slightly peculiar face.

Plus, that pistachio ice-cream green color! 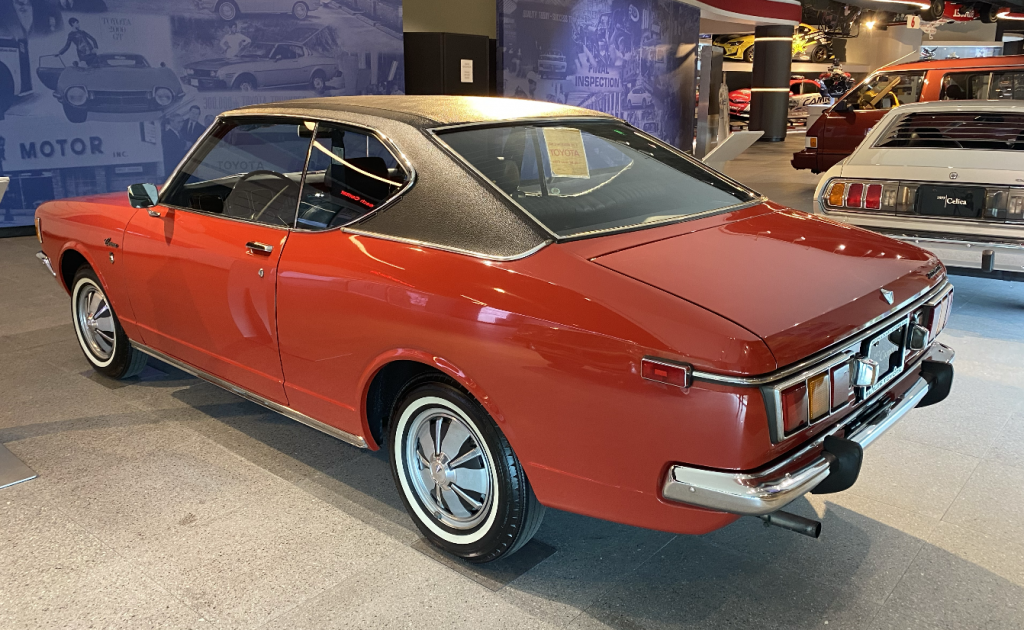 You can’t expect any decent collection of cars to be worth a damn if they don’t have at least one example of the pinnacle of automotive design and quality — the vinyl roof. Toyota’s entry here is this kicky 1972 Corona coupe. 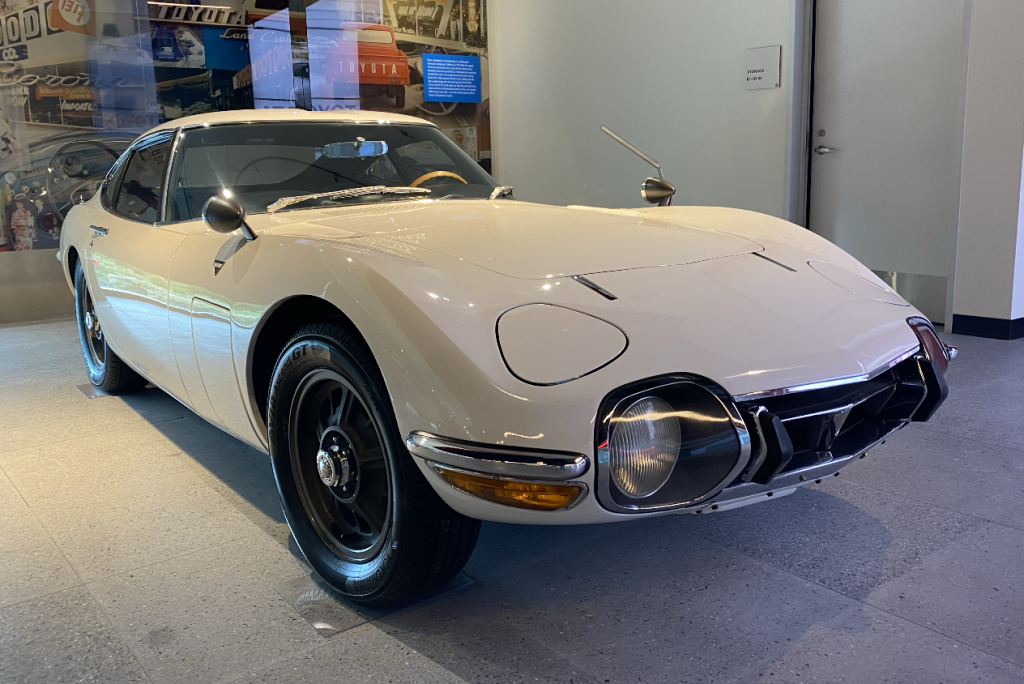 The Toyota 2000GT is, of course, an absolutely stunning car. Only 351 of these lithe beauties were built (in partnership with Yamaha) between 1967 and 1971, and was a huge deal at the time of its launch because it’s the car that told the world that Japan was capable of producing cars that were impressive and desirable in their own right, and not just derivatives of other countries’ cars.

The collection here actually has two 2000GTs, with the other one being this yellowish-looking one:

It’s actually not yellow; it’s gold, and the reason it’s gold is because it is one of two cars built for the 1967 Tokyo Motor show. The car was famously photographed with ’60s fashion icon Twiggy, who later bought one of her own, even though she couldn’t drive at the time.

This one in the collection had an interesting life as a car in a failed TV show, got repainted, then restored back to the original condition seen here. Here’s a clip of the show, if you’re curious – its full of great cars:

The show was, it seems, awful, just awful. 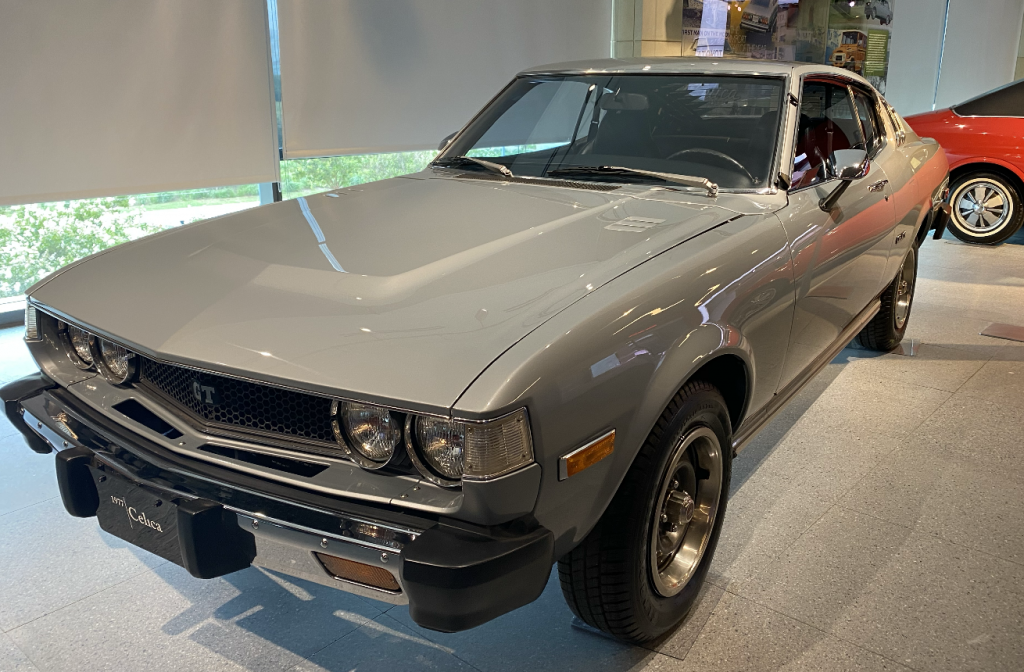 There’s also a nice ’77 Celica here, and looking at it you can really see the influence from American pony cars like the Mustang. Plus, note the prominent, bold, clear sidelights, something not terribly common on American cars of the era.

At the opposite conceptual extreme but possessing equal quantities of raw coolium, was this: 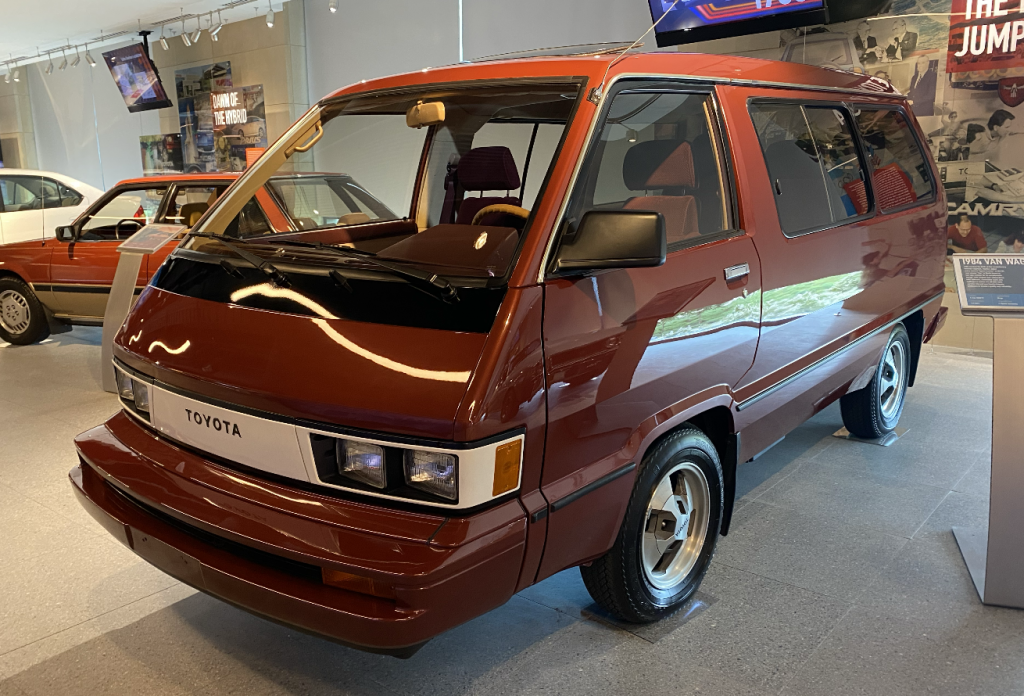 A 1984 Toyota Van Wagon! The Previa’s predecessor, a fantastic study of novel, practical packaging, complete with a mid-engine the driver and front passenger sat on. You’ll very occasionally see these on the road still, and they still feel like little spaceships.

Since we’ve seen some fantastic vintage Toyotas here, I feel like I owe you a little taillight roundup: 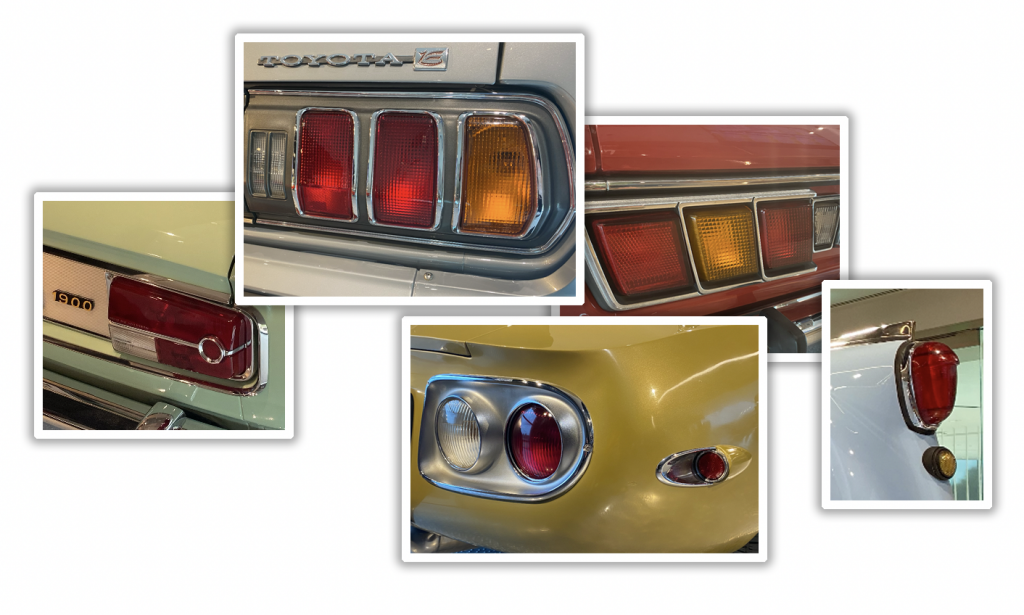 There’s some fantastic taillight design going on here: the Celica’s clearly Mustang-inspired vertical cluster of three lamps (with a little parallel pair of reverse lamps nearby), the old Corona’s simple lights punctuated with that little round reflector, the old Toyopet’s archaic little lump and strange, yellowish reflector, and especially the 2000GT’s twin round lamps and that fantastic little reflector inset into its own little rocket-engine-like unit. Excellent taillightery going on here. 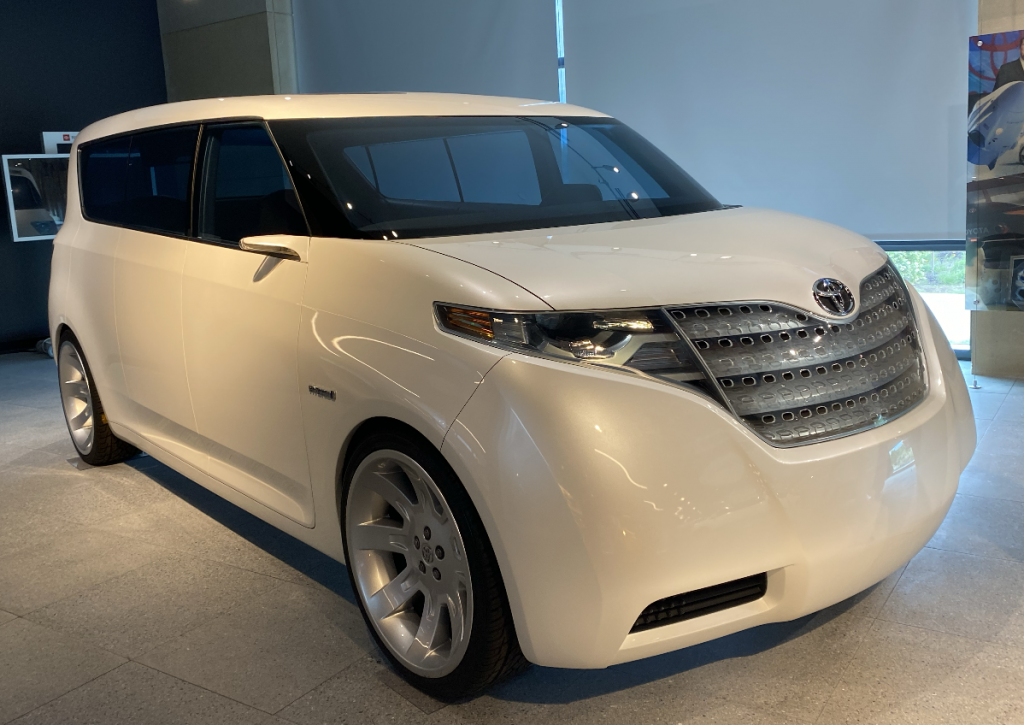 There’s one concept car here, too, the 2006 F3R concept, which is a sort of development of the wildly useful boxy design of the Scion xB/Toyota bB. It had rotating seating inside, and in some ways predicted automated vehicle design concepts with its room-on-wheels approach.

Aside from cars, there were some other weird little artifacts floating around, like some of the contents of this shelf-wall: 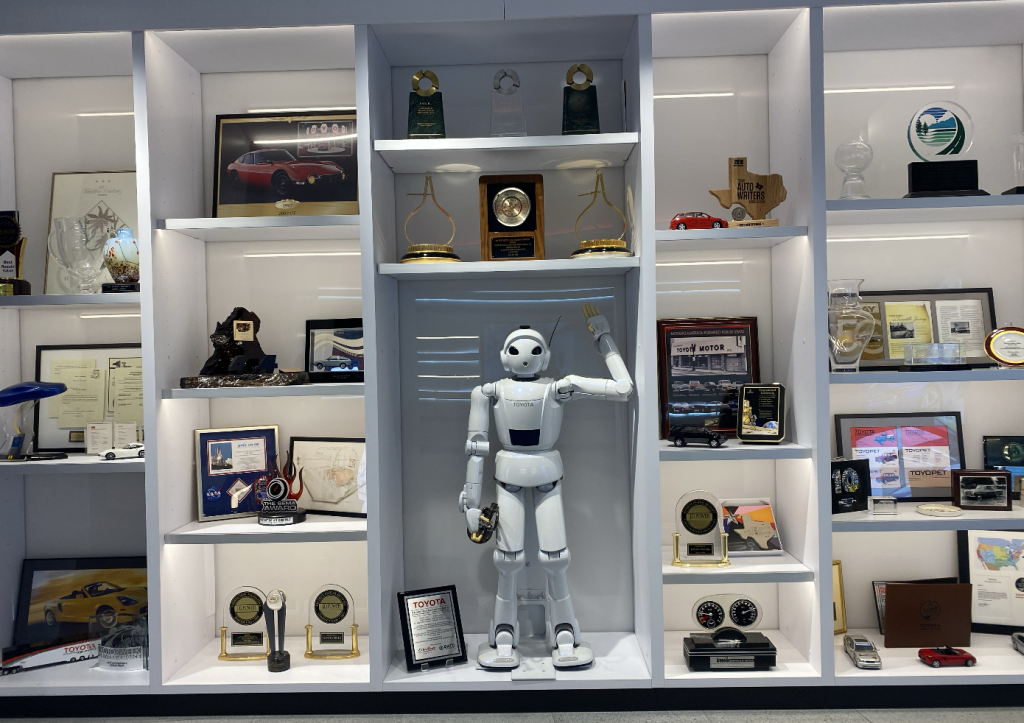 Are you wondering what the hell that robot is in the middle there? You should be, because it’s a big fucking deal: that’s the first robot to really successfully play the trumpet.

Toyota had a whole series of humanoid robots known as their Partner series, and clearly one of their goals was to free civilization from the tyranny of human trumpet players, a group that has had their fingers around humanity’s collective throat for far too long. 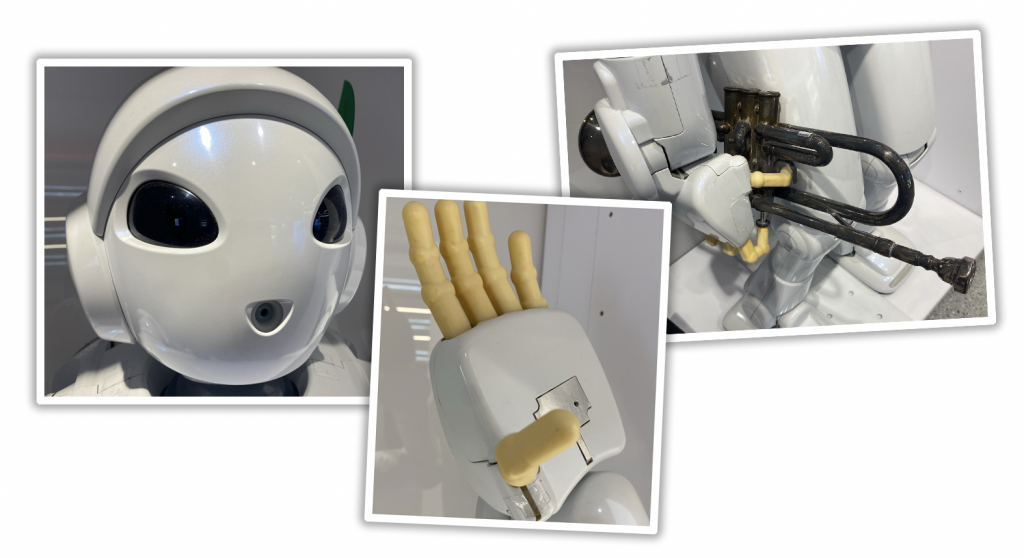 There’s a lot of creepy details on this robot, like that little air-blowing mouth or those odd, rubbery, bony-looking fingers. I’m assuming it’s been mothballed now, but hopefully should the need arise, this robot can be re-deployed to do all the mechanized trumpeting any given situation requires.

Here’s an interesting little insider tidbit for all you hardcore Toyota fans – Scion may be long gone in the real world, but a bit of Scion lives on inside of Toyota, in the form of the name of two conference rooms: 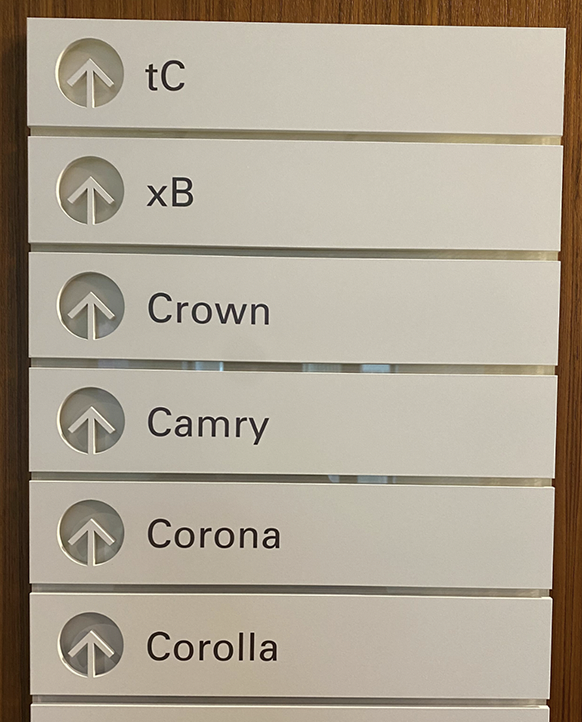 And, one last, and truly baffling thing: At the Lexus presentation, we were shown a slide that showed that the Lexus brand is making real headway among younger consumers, based on some AdAge study: 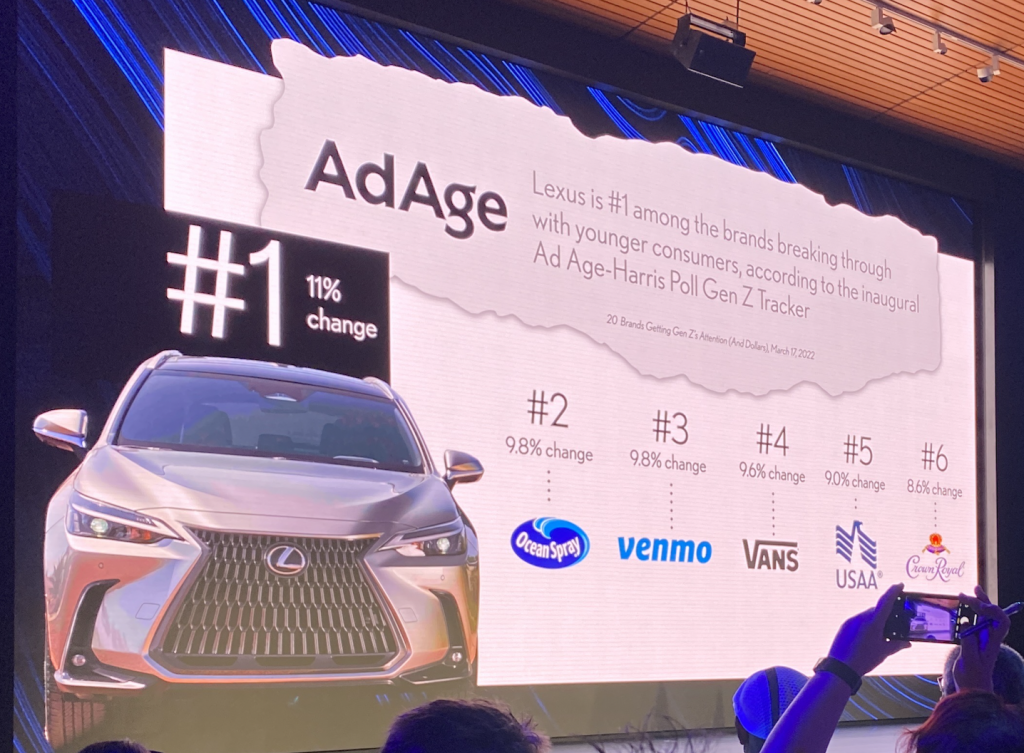 According to the research, the top six brands are Lexus, Ocean Spray, Venmo, Vans, USAA, and Crown Fucking Royal? What the hell kind of a list is that? Is the Ocean Spray thing just all because of that dude on TikTok chugging cranberry juice and singing Fleetwood Mac, or do UTIs factor in here?

Venmo is popular, sure, even if trying to make a social media network out of paying your friend back for dinner or dewormer is weird. Vans are vans, checkerboard slip-ons will always have cachet, but USAA? Isn’t that an insurance company? Why would people give the tiniest shit about them?

At least Crown Royal comes in those little velvety bags.

I don’t get what’s going on here at all, why this deeply random list of unrelated brands would have any import to Gen Z or Gen Anyone, really. Has a major automaker ever made a big deal about beating a juice company at, well, anything? This is weird, but if Lexus is happy, wonderful. You do you, Lexus.

I'm a co-founder of the Autopian, the site you're on RIGHT NOW! I'm here to talk to you about taillights until you cry and beg me to stop, which I absolutely will not. Sorry. Hug? Also, David's friend.
Read All My Posts »
PrevPreviousThe 2023 Toyota Corolla Hybrid Takes After Its Big GR Brother And Starts Spinning All Four Tires
NextCold Start: Making Monobrows Mean MuchNext