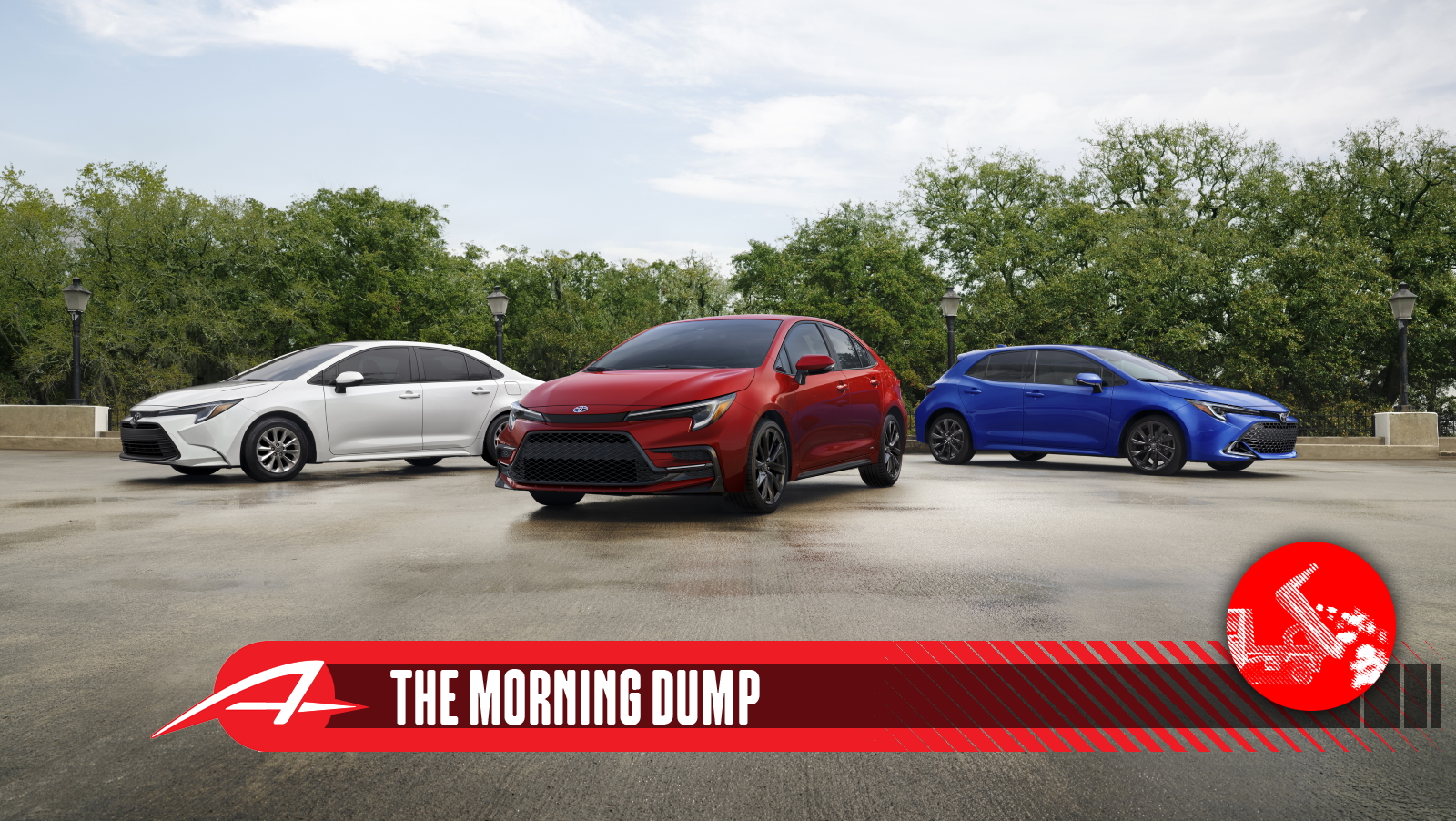 The 2023 Toyota Corolla Hybrid adds electric all-wheel-drive, Jeep gets Jurassic again, Ford makes some big hiring moves. All this and more on today’s issue of The Morning Dump.

The World’s Best-Selling Car Nameplate Gets A Fresh Update

While the GR Corolla is the Toyota Corolla we all want, there’s something to be said for having one reliable car and one really dumb toy in the garage. What’s more reliable than a regular Corolla? Toyota introduced the current generation model in June of 2018, so it’s about time for a mid-cycle refresh.

Let’s start with the gas-only model. The old base model’s 1.8-liter engine has gone in the bin, and the two-liter 169-horsepower four-cylinder engine from higher trim levels has made its way down the range. Toyota claims shaves two seconds off the base model’s 0-60 mph (0-96 km/h) time and better fuel economy, an all-around win if I’ve ever seen one. Moving on up to the hybrid model is where things get really interesting. Or should I say hybrid models? Don’t worry, you can still get a front-wheel-drive Corolla Hybrid, except now you can get one that spins both axles with help from an electric motor out back. In addition, hybrid models get a new front motor and a new space-saving lithium ion battery pack, pretty solid upgrades. Toyota hasn’t finalized power or efficiency figures for the all-wheel-drive Corolla Hybrid, but we’ll keep you updated as information becomes available.

Moving on to styling and trims, exterior revisions seem fairly light. All models get ever-so-subtly updated front fascias and sweet new LED daytime running lights, while all models but the base L and luxed-up XLE sedans get revised rear valences. On the trim level front, customers can now combine hybridization with the sporty SE trim, in which case they get an added bonus of steering tuning from last year’s sporty Apex Edition model. Not a bad perk if you ask me. Moving to the cabin, Toyota’s new-generation infotainment system is offered on all Corollas, a welcome upgrade over the outgoing system’s washed-out low-resolution touchscreen. All Corollas now feature an eight-inch touchscreen with wireless Apple CarPlay and wireless Android Auto, removing the Corolla from the shitlist of cars that offer wireless charging but no wireless phone mirroring. Also on offer? An updated available digital gauge cluster and an enhanced driver assist suite. Not bad. Toyota hasn’t announced pricing or timing for the 2023 Corolla, but we wouldn’t be surprised to see in showrooms before the end of the year. Hey, more cars that aren’t crossovers are always good and if a sensible, small, all-wheel-drive hybrid helps at least one person justify putting an old Jaguar XJR in their garage, I’m all for it.

With the impeding release of a new Jurassic World movie on June 10, it was about time that Jeep did something to celebrate. Is it a stickered-up Wrangler? Maybe they tapped Jeff Goldblum to do another ad? Erm, no. However, Jeep did use Amblin Entertainment’s expertise to show a dinosaur for the first time in a global TV ad. See, the Carnotaurus is a theropod from the late Cretaceous period, and paleontologists have only found one Carnotaurus skeleton – an adult. Using some serious research and expertise, the team at Amblin Entertainment created what is believed to be an accurate depiction of a baby Carnotaurus for a minute-long TV ad and its 30-second cutdown. Pretty cool.

As for the ad itself, it’s pretty cute and features some electrified options in Jeep’s lineup. The hero car is clearly the Wrangler 4xe plug-in hybrid, but there’s also a Grand Cherokee 4xe plug-in hybrid midsize SUV on display. Unfortunately, it doesn’t appear that Jeep has any plans for a special Jurassic World-edition Wrangler, but a spokesperson for the brand said on Wednesday that Jeep is always looking for special edition opportunities. Hey, if Call Of Duty: Modern Warfare 3 got a special edition Wrangler, there’s still a smidgen of hope.

After several months off the market due to a massive battery recall, the Chevrolet Bolt EV is back. While I’ve already detailed the Bolt’s new blacked-out Redline mall goth appearance package, the real hook for new customers is a recently-announced lower starting price. How low? $26,595 including the freight fee. Yeah, that’s a bargain if I’ve ever seen one. For context, a base-model Nissan Leaf will run you $28,425 and only come with a paltry 149-mile (239 km) range to the Bolt EV’s 259-mile (417 km) range. Oh, and the Leaf uses a less widely-available CHAdeMO fast-charging connector to the Bolt’s CCS connector, making short road trips in the Bolt that much easier.

While $26,595 is cheap, it could be cheaper. See, Chevrolet has exhausted its supply of federal EV tax credits, so there’s no getting $7,500 back from the federal government for purchasing a Bolt EV. The good news is that price cuts for 2023 aren’t isolated to the base-model Bolt. The uplevel LT model is also $5,900 cheaper than last year, now starting at $29,795. Oh, and the long-wheelbase Bolt EUV is also playing along. According to Chevrolet’s press release, it gets a $6,300 price cut over 2022, so the base trim starts at $28,195 and the top-spec Premier trim starts at $32,695. Honestly, with gas prices up, a cut-price EV sounds like it could be a winner.

Polestar Turns Up The Wick

One thing I really like about Polestar is that every so often, the brand will bolt some fancy suspension onto something, add some power, see what it’s like to drive, and then often produce it because it’s a bit of a laugh. While the Polestar Engineered variants of the Volvo S60 sedan and V60 wagon are brilliant, it’s time for Polestar to turn its attention inward and focus on its entry-level luxury EV.

The Polestar 2 BST Edition 270 is a bit of a mouthful, but it does add some very cool stuff. While 476 horsepower on tap is nothing to sneeze at, it’s not the headline here. After all, dual-motor 2023 Polestar 2s with the Performance Pack receive an identical boost in power. The real story is the revised suspension setup and tire package that promises to make this Polestar 2 lower, stiffer, and grippier than all the rest. Ride height is down by 25 mm, almost a full inch lower than the standard car on springs that Polestar claims are 20 percent stiffer than standard. Lower, stiffer springs often call for special dampers, so the BST Edition 270 gets upgraded two-way adjustable Öhlins units with knobs for compression and rebound damping. There’s also a front strut tower brace on tap for increased body rigidity. Wheel diameter clocks in at a massive 21 inches, while tires are bespoke Pirelli P Zeros. Polestar only plans to make 270 units, with a maximum of 47 units making it to North America starting in the fourth quarter of 2022. If the idea of this hunkered-down EV floats your boat, you might want to get in line early.

It’s no secret that Ford has some serious ambitions, and serious ambitions often require a lot of effort to achieve. Since many hands make light work, Ford is reportedly making some serious investments in hiring and job security. According to CNBC, Ford is looking to invest $3.7 billion into several American plants for products ranging from the next Mustang to another electric commercial vehicle. Big investments mean big manpower, so Ford’s looking to hire 6,200 full-time unionized workers throughout the Midwest. In addition, 3,000 temporary employees will gain full-time roles and benefits, a solid boost in job stability.

United Auto Workers President Ray Curry seems pretty pleased with the deal, stating in a press release that “This announcement to UAW members who contribute their skill, experience and knowledge to the success of the Ford Motor Company,” adding that “Ford stepped up to the plate by adding these jobs and converting 3,000 UAW members to permanent, full-time status with benefits.”

We may live in an age of low unemployment, but it’s always good to see more solid, unionized jobs open up. Plus, kudos to Ford for continuing to invest in combustion-powered vehicles. While electric vehicles are undoubtedly cleaner, they remain a difficult to live with option for sparsely-populated areas of the country given the current state of the public charging network.

Whelp, time to drop the lid on today’s edition of The Morning Dump. While $26,595 for a brand new Chevrolet Bolt seems pretty cheap, I’m curious to hear how you feel about an entry-level EV priced in the mid-20s. Personally, price doesn’t matter to me so much as payment does. Electric cars are evolving so quickly that I’d be reluctant to place equity into a mass-market model. Lease one for three years, write off business-related mileage, consider the state of the marketplace towards the end of the lease, and then figure out the next move. Then again, I’m likely an outlier. Maybe you’d feel perfectly comfortable financing a Bolt either knowing that a short supply of off-lease vehicles helps with short-term vehicle equity or knowing you’d feel comfortable driving one for a decade or so. Regardless of your position, I’d love to hear from you.

Thomas is a Nu Rave-blaring, heel-toe downshifting, maple syrup-swilling, chassis-geeking, junkyard parts-hauling, floppy-haired scenester who's been writing about cars since college. His current ride is a 2006 BMW 325i with the six-speed manual gearbox. Instagram: @thomas.hundal Twitter: @thomashundal
Read All My Posts »
PrevPreviousNo, I’m Not Kidding: A Cheap 1989 Bentley Eight! And Also, A Pretty Cool Geo Storm
NextHere Are All The Interesting Old Cars Hidden In Toyota’s Texas HQ, Plus A Robot That Plays The TrumpetNext