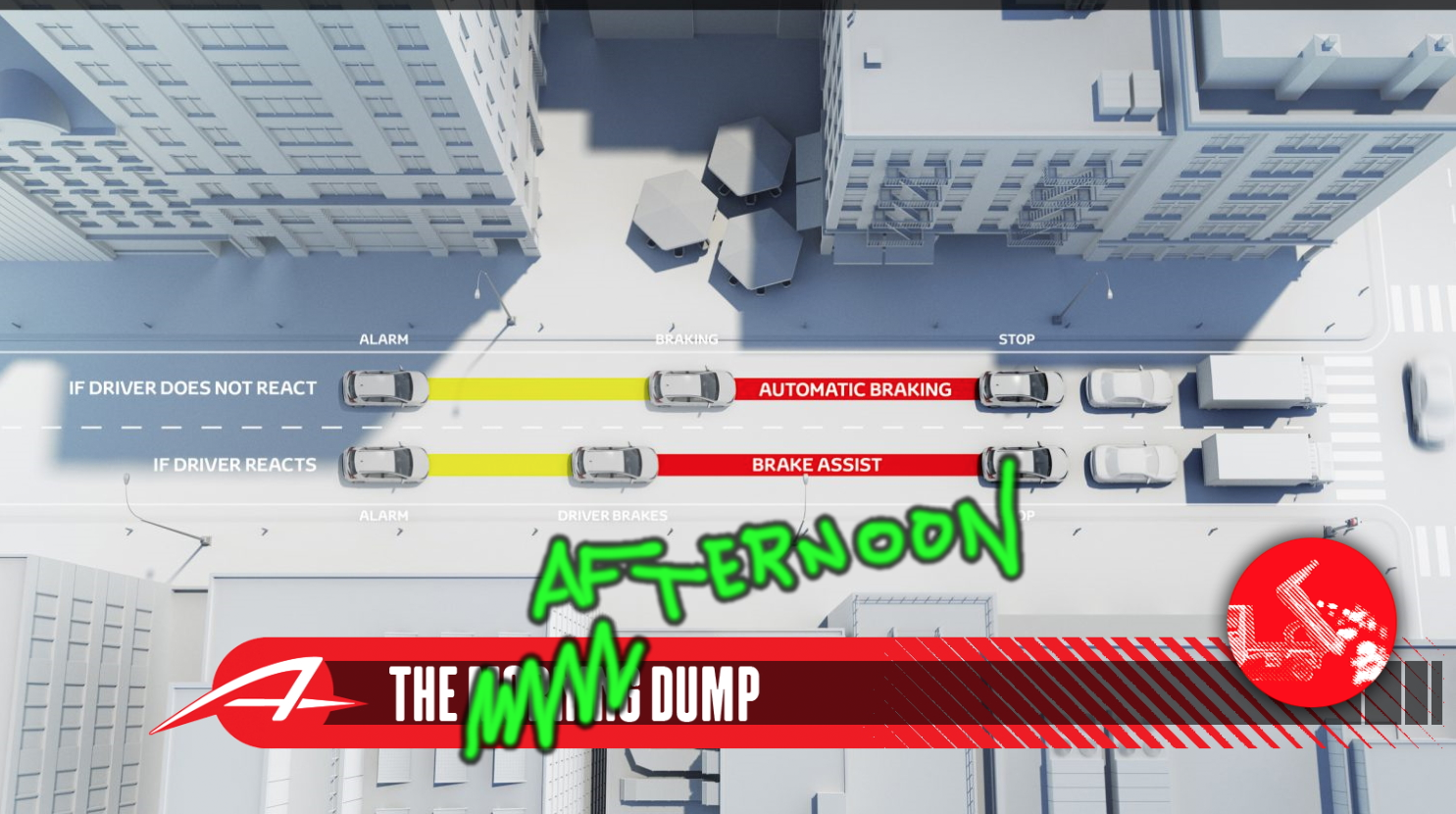 The Polestar 2 gets some upgrades for 2023, Aston Martin goes Italian, the IIHS considers stricter testing for automatic emergency braking. All this on today’s edition of The Morning Dump.

Automatic Emergency Braking is getting better, and the Insurance Institute for Highway Safety is considering updating its AEB test procedure to better suit real-world conditions. Honestly, it feels well overdue. Wait, let’s back up a second. What exactly is automatic emergency braking? Put simply, it’s a safety system that slams on the brakes should a driver fail to do so. Some automatic emergency braking systems use radar, some use cameras, and some use both to estimate a car’s speed relative to that of obstacles in front. If a car with an AEB system is closing in on an obstacle at a high enough speed difference to potentially cause a collision and the driver doesn’t take braking action, the ABE pressurizes the brake system to avoid or mitigate a collision.

As it sits, the IIHS only tests automatic emergency braking at speeds of 15 to 25 mph (24 to 40 km/h) which seems laughably slow. Oh sure, Volvo’s decade-old City Safety automatic emergency braking system only worked at speeds of up to 30 mph (50 km/h), but we’ve moved on a lot in a decade. According to Automotive News, the IIHS is considering raising test speeds to between 35 and 45 mph (56 to 72 km/h) which seems significantly more realistic. Aside from in city centers, school zones, parking lots and tight residential neighborhoods, North Americans don’t really go just 15 to 25 mph anywhere.

The technology is already slashing crash rates by as much as half for vehicles equipped with it. However, the test that IIHS uses to evaluate AEB systems only represents a slim fraction of the rear-end crashes AEB is designed to mitigate, a new IIHS study shows.

“Thankfully, in the real world, AEB systems are preventing crashes at higher speeds than the maximum 25 mph our test program uses,” says IIHS Senior Research Scientist David Kidd, the author of the new paper. “The problem is that our current evaluation doesn’t tell us how well specific systems perform at those speeds.”

IIHS plans to conduct research tests on six vehicles equipped with different front crash prevention systems at speeds up to 45 mph. Tests will also be conducted using different types of passenger vehicles and other vehicles like a motorcycle and various sizes of trucks as the stationary vehicle.

It really does seem time to grab automatic emergency braking systems by the scruff of their necks and really sort the wheat from the chaff. Many consumers find automatic emergency braking to be a sort of psychological safety net which is frankly terrifying. When you’re driving, you have one job – to drive the damn car. Pay attention, mind the mirrors, look far down the road, proactively use headlights on overcast days, that sort of stuff. Still, even inconsiderate, inattentive menaces have to get around somehow, and with North American public transit being appallingly poor, preventing morons from crashing into your pride and joy seems like a good move.

There’s been a bit of a shake-up at Gaydon. Ex-AMG boss Tobias Moers is out at Aston Martin, and former Ferrari CEO Amedeo Felisa is coming in as chief executive officer. Funnily enough, Felisa isn’t the only former Ferrari exec to find a place at the British brand – former Ferrari chief technical officer Roberto Fedeli is also on board. Yes indeed, it seems like Warwickshire is turning a bit Italian.

Now, you may not know much about Amedeo Felisa, so let’s detail some of his accomplishments. Felisa oversaw, well, everything at Ferrari from 2008 until 2016, an era that produced some spectacular and very pretty cars. The 458 Italia and subsequent 458 Speciale are widely regarded as two of the best supercars of the modern era and have been benchmarked by just about everyone from Acura to Chevrolet. The F12 Berlinetta is astonishingly quick and achingly beautiful, eschewing the bulbous styling of the 599 GTB in favor of gorgeous taut curves. It’s so good-looking that the judges at Compasso d’Oro, one of Italy’s most prestigious design competitions, selected it as a winner for the 23rd ceremony. Past winners include Ettore Sottsass and Alberto Gozzi’s timeless Nuovo Milano cutlery set and Dante Giacosa’s Fiat 500, properly iconic contemporaries. A history of good business decisions around fast and incredibly pretty cars is exactly what Aston Martin needs right now.

More importantly, Felisa is in it for the long-haul. Automotive News reports that during Aston Martin’s first-quarter earnings call, Chairman Lawrence Stroll confirmed Felisa’s commitment to the British brand and said “I don’t think I’ve met a more energetic gentleman in my life. [Felisa] is up for this task.” Honestly, the timing seems right. The same automotive news report mentions updates to the Vantage, DB11 and DBS Superleggera front-engined two-door cars next year, along with the first electric Aston Martin coming in 2025. The electric shift is a big change, but I’m sure Felisa is up to the task.

To tell the truth, I’m hoping the new injection of life could perk Aston Martin up a bit. Fifteen years ago, Aston Martins were some of the most beautiful cars in the world. Now, aside from the DBS Superleggera, they all seem just a touch ugly. I know that following up the DB9 is a bit like following up Mona Lisa, but the DB11 looks almost unfinished. A bit like La Scapigliata then.

Want something that’s like a Tesla but without the poor build quality, questionable after sales support and cult-like fandom? The Polestar 2 might just be the ticket. This crossover liftback sedan (a bit like a more practical Subaru Legacy SUS) is off to a steady start, and the Polestar brand itself saw a self-reported 29,000 global sales last year. To keep up with the pack, the Polestar 2 is getting a round of updates for the 2023 model year that largely address performance.

Let’s start with changes to the Plus Pack. Not much change in content there aside from a more advanced air filter and reworked heat pump programming that operates between 20 and 77 degrees (-7°C to 25°C), up from the 40 to 60 degrees (4.4°C to 15.6°C) operating temperature for the current heat pump. While, the reworked heat pump should prove massively more effective in cold temperatures, good news for many people who experience actual seasons, it’s worth noting that all current Polestar 2s optioned with the heat pump will have this expanded capability rolled out in an over-the-air update. Another Plus Pack perk is that ticking the box for the Plus Pack unlocks the option of ventilated Nappa leather from Bridge of Weir, although this upholstery choice is enormously expensive. I know ventilated seats are good, but are they really worth $4,000?

Moving on to revisions to the dual motor model, careful software optimization has eked out another 11 miles of rated range. Honestly, this feels like getting an extra slice of pickle on my hamburger – somewhat nice, but more of a take-it-or-leave-it proposition. Fortunately, Polestar has also managed to slip some melted Gruyere onto this hamburger because dual-motor Polestar 2 models with the Performance Pack are getting an extra 68 horsepower (50.7 kW) and 15 lb.-ft. (20.3 Nm) of torque, boosting output to 476 horsepower (355 kW) and 502 lb.-ft. (681 Nm) of torque. Now that’s what I’m talking about, it’s good to see that the Performance Pack is getting more than just summer tires, a special set of alloys, gold seat belts and Öhlins dampers. If you don’t want to put up with the stiff ride of the Öhlins dampers, Polestar plans to make the power boost available on all dual-motor models for a to-be-announced fee.

In addition to changes for option packages, dual-motor range and available power, Polestar’s switching up the color palette on the 2 for 2023. Actually, color palette is putting it generously. There’s only one actual color on offer, the rest of the paint options are grayscale. Last year’s black, called Void, gets replaced by an extra-cost metallic black called Space. Last year’s dusty gray called Moon is replayed by another dusty gray called Jupiter. A silver called Magnesium becomes the standard no-charge color option and if you don’t like silver because it seems a bit 2000s, get ready to pony up an extra $1,250.

Honestly, pricing is the really big change for the 2023 Polestar 2. The base single-motor car climbs $2,400 to $49,800 including delivery and destination while the dual-motor car climbs $2,000 to $53,300. The Plus Pack jumps $200, as does the Pilot Pack driver assist suite on single-motor cars, despite neither pack truly including anything significantly new that won’t be rolled out as an over-the-air update to older cars. Not great on the value front so far, but the Performance Pack seems alright. At a $500 increase over 2022’s Performance Pack, that works out to about $7.35 per horsepower. Not bad at all if you ask me. Expect the first 2023 Polestar 2s to start arriving later this year. A bit of a wait, but that’s to be expected given the current car market.

Whelp, time to drop the lid on this issue of The Morning Dump. Happy Thursday everyone, it may be Friday’s little brother but it means you’re that much closer to the end of the work week. To celebrate, let’s play a little game. Imagine it’s 2005 and you have $35,000 plus sales tax to plunk down on a brand new sports car. Are you buying a Mazda RX-8, a Honda S2000, a Nissan 350Z, or something else?

Thomas is a Nu Rave-blaring, heel-toe downshifting, maple syrup-swilling, chassis-geeking, junkyard parts-hauling, floppy-haired scenester who's been writing about cars since college. His current ride is a 2006 BMW 325i with the six-speed manual gearbox. Instagram: @thomas.hundal Twitter: @thomashundal
Read All My Posts »
PrevPreviousForklifts, Ratchet Straps, Prayer: How America’s Quirkiest Car Museum Changes Out Exhibits When Some Of The Vehicles Don’t Run
NextCalifornia May Soon Pay You To Convert Your Car To An EV And I Hope The Federal Government Follows SuitNext