Forklifts, Ratchet Straps, Prayer: How America’s Quirkiest Car Museum Changes Out Exhibits When Some Of The Vehicles Don’t Run

Here at Lane Motor Museum (where I work as the education director), we have too many cars and not enough space to display them all. Our main exhibit floor can only hold about 150 cars, but we have almost 550 cars in the collection at the time of this writing.

So we rotate the big exhibits on an annual basis. This does one of two things: it keeps the exhibits fresh for returning visitors (which is a great marketing tool) and it allows cars that would normally be tucked away in the basement storage area to see the spotlight.

We get asked often: How do you change exhibits at the museum? Well, here’s an inside look.

We’re closed to the public on Tuesdays and Wednesdays, which gives us time to move cars in and out of the building without visitors around. This is helpful, as we have pretty strict pedestrian safety rules, like “no running over guests with the museum cars.”

Our building is a former bread bakery, and during renovation, before the museum was open in 2003, the loading dock for the bread delivery trucks was turned into a ramp, and a large roll-up door was added. The cars can come on and off the floor pretty easily. 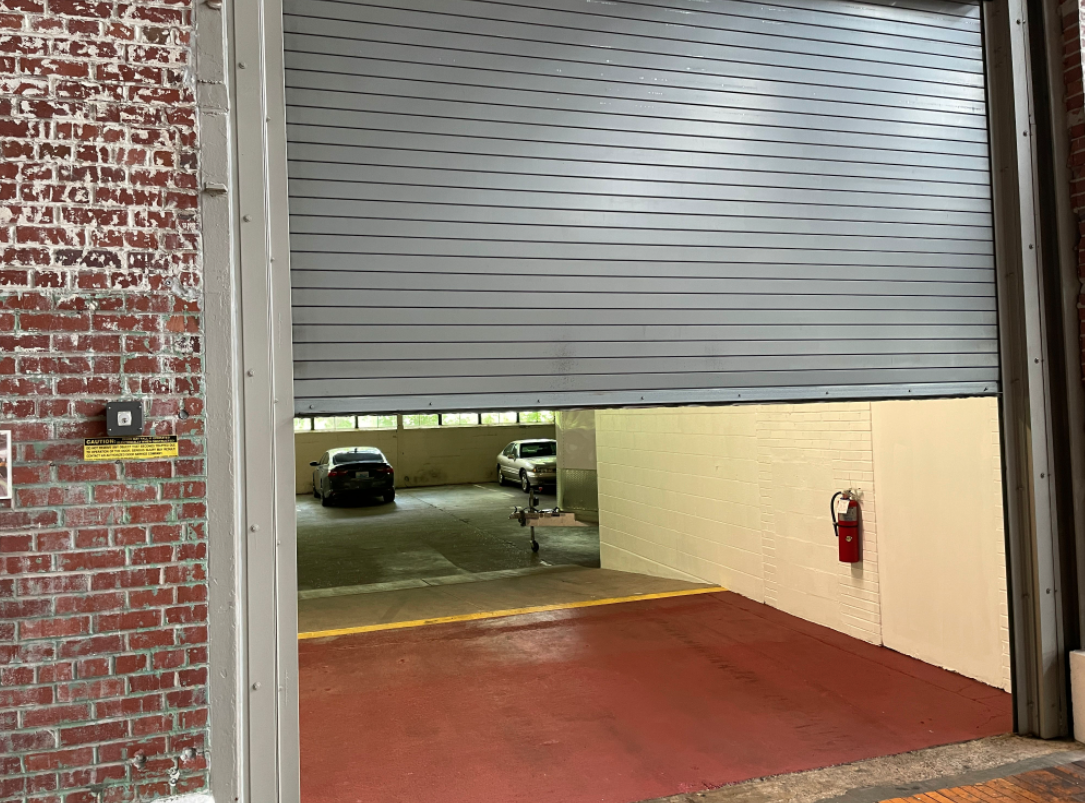 The following four exhibits were changed out over the last month. Let’s start with the installation of our celebration of the Fantastic Fiat 500. 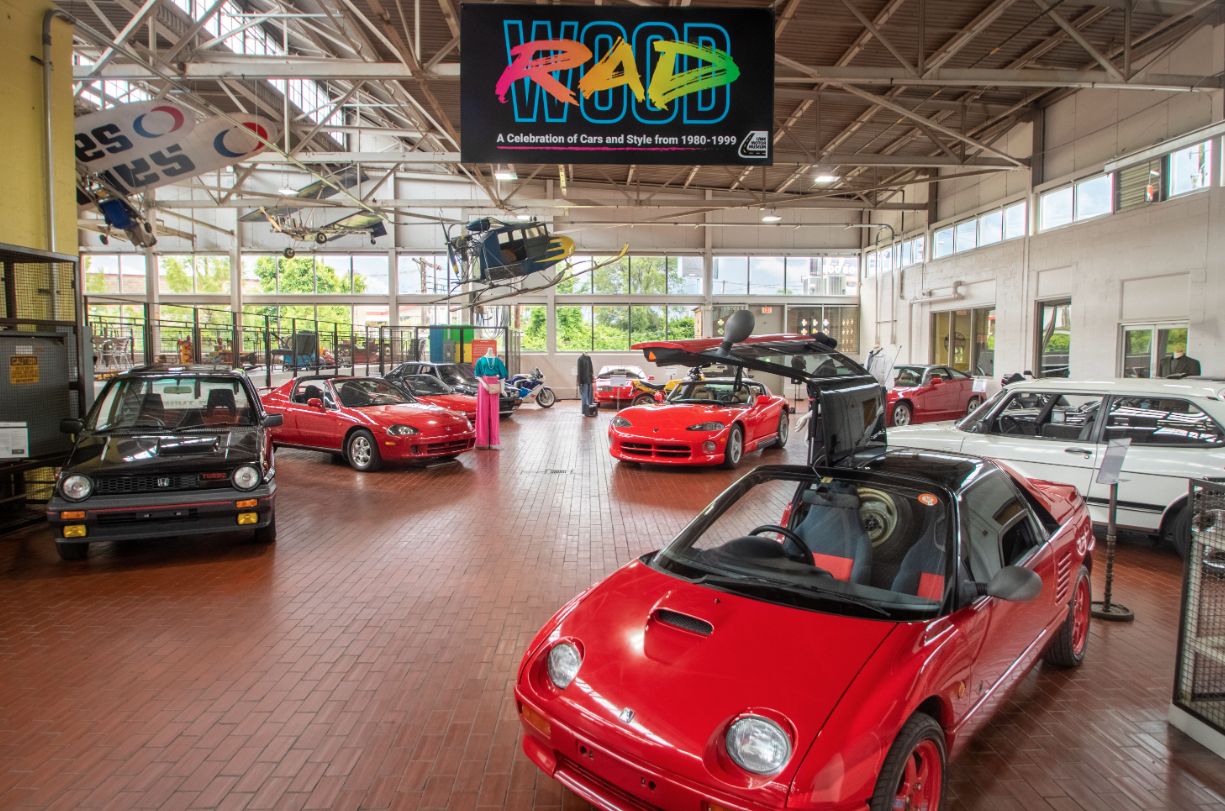 Previously, this area held our Radwood exhibit, highlighting the best of our 1980s and 90s cars.

First, of course, Radwood had to be taken out. It was 14 cars and three motorcycles. We were without a curator this past winter, so Jeff Lane offered to do the exhibit planning. Here’s is Jeff’s very analog exhibit layout for Fiat. 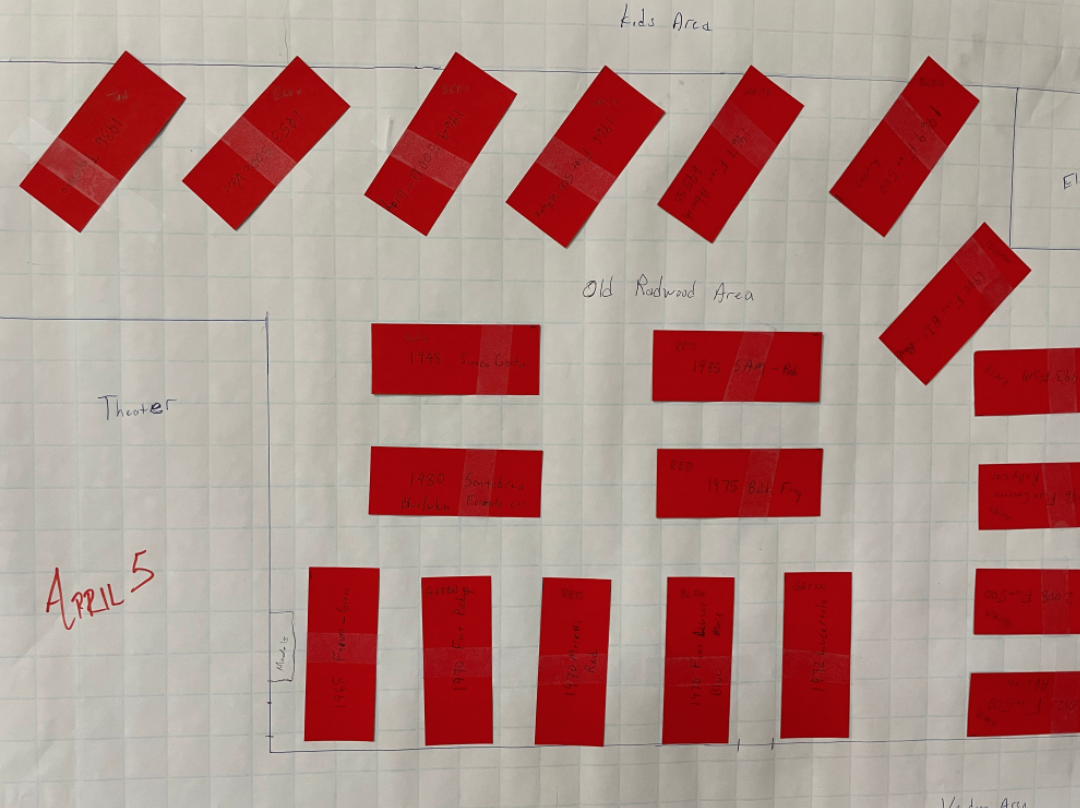 To start, you fill in the far corner of the museum floor. 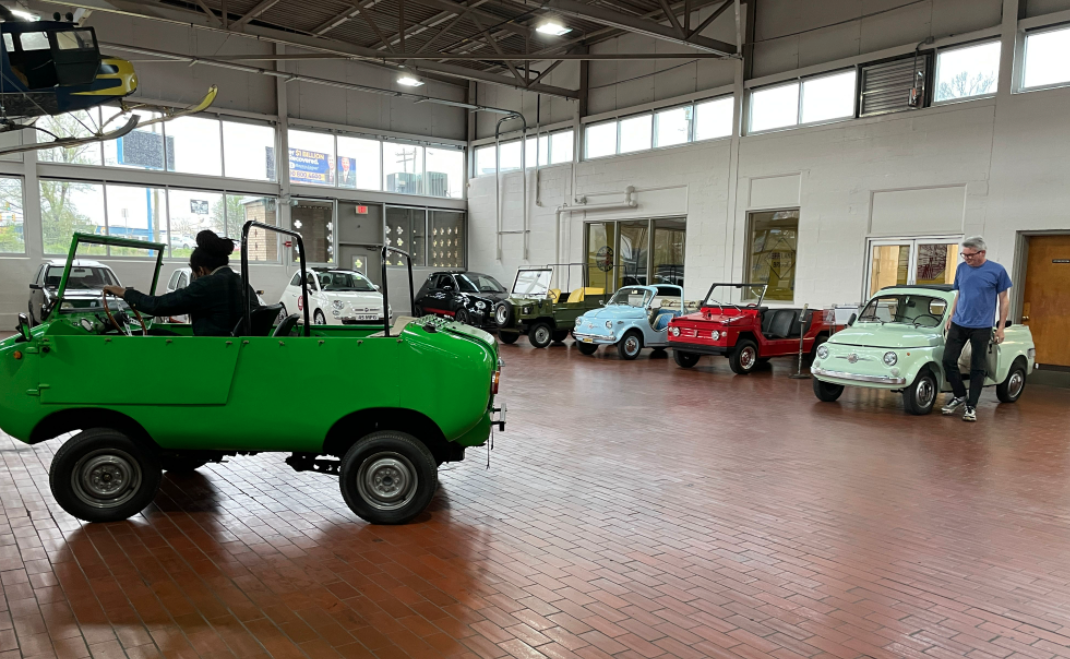 Here are Gabriel and James, our collection technicians. They are responsible for light mechanic work, including getting the cars clean, fueled, and ready for car shows, displays, or just transport. These two are vital to the museum’s mission. 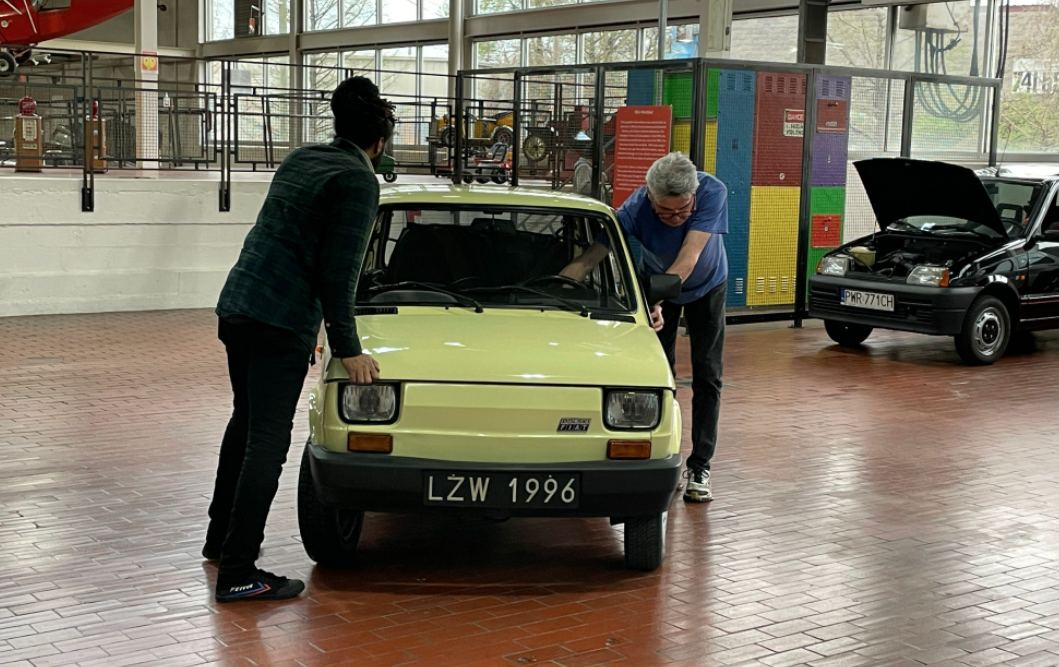 Most of the cars in the collection run and drive, but some just can’t get started for various reason. This little Polski Fiat Bis (That’s the water cooled one from the late 1980s) would not start, so it had to be towed in and pushed into place. 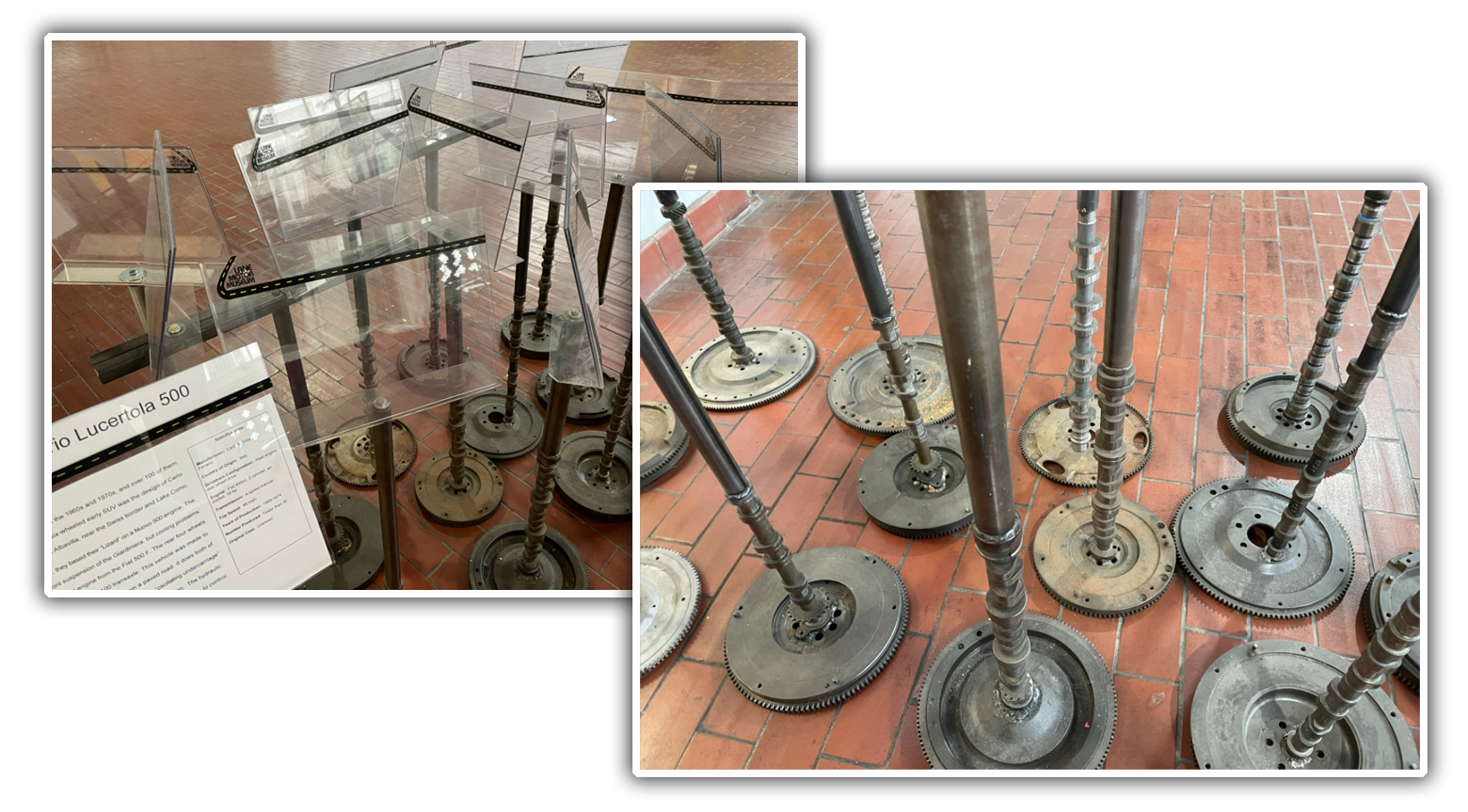 Each of our cars have a display sign next to them. The text is printed on legal size paper, and slide in and out of the plastic sign. The bases are made of flywheels and camshafts…this looks cool, and provides a bit of weight so the sign doesn’t fall over. I go through and edit each sign’s text to make sure it makes sense and that it works with our new exhibit.

We usually arrange the cars chronologically. The 1936 Fiat 500A Topolino is the first car you’ll see when entering the exhibit. 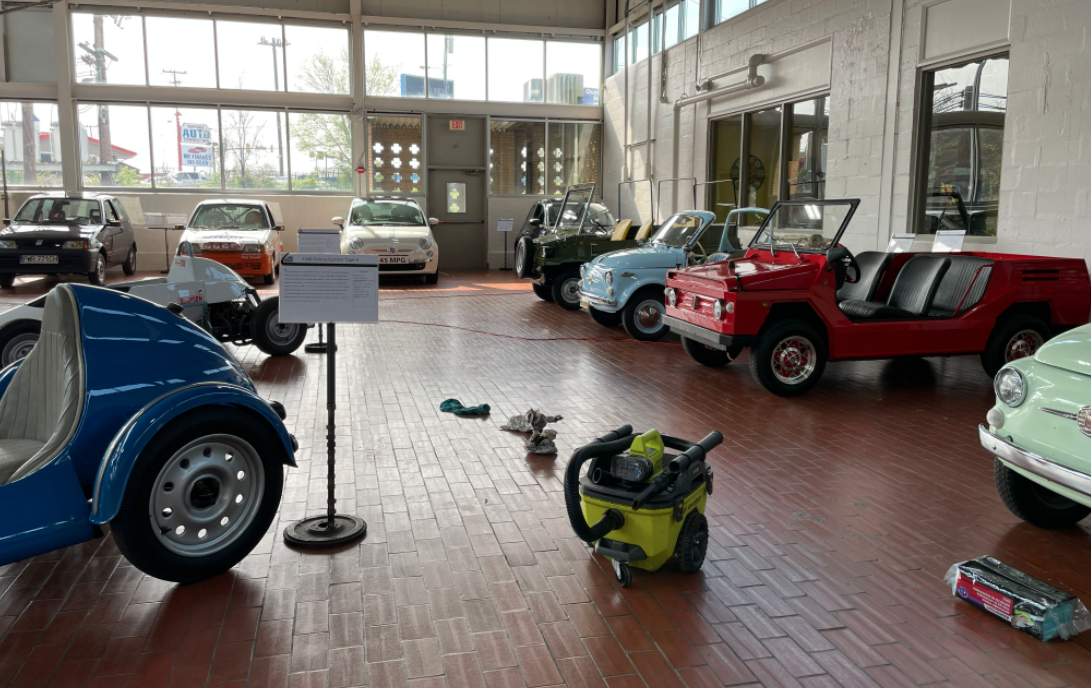 Time to vacuum each car’s

Here we are vacuuming each car’s interiors and doing some last minute detailing. 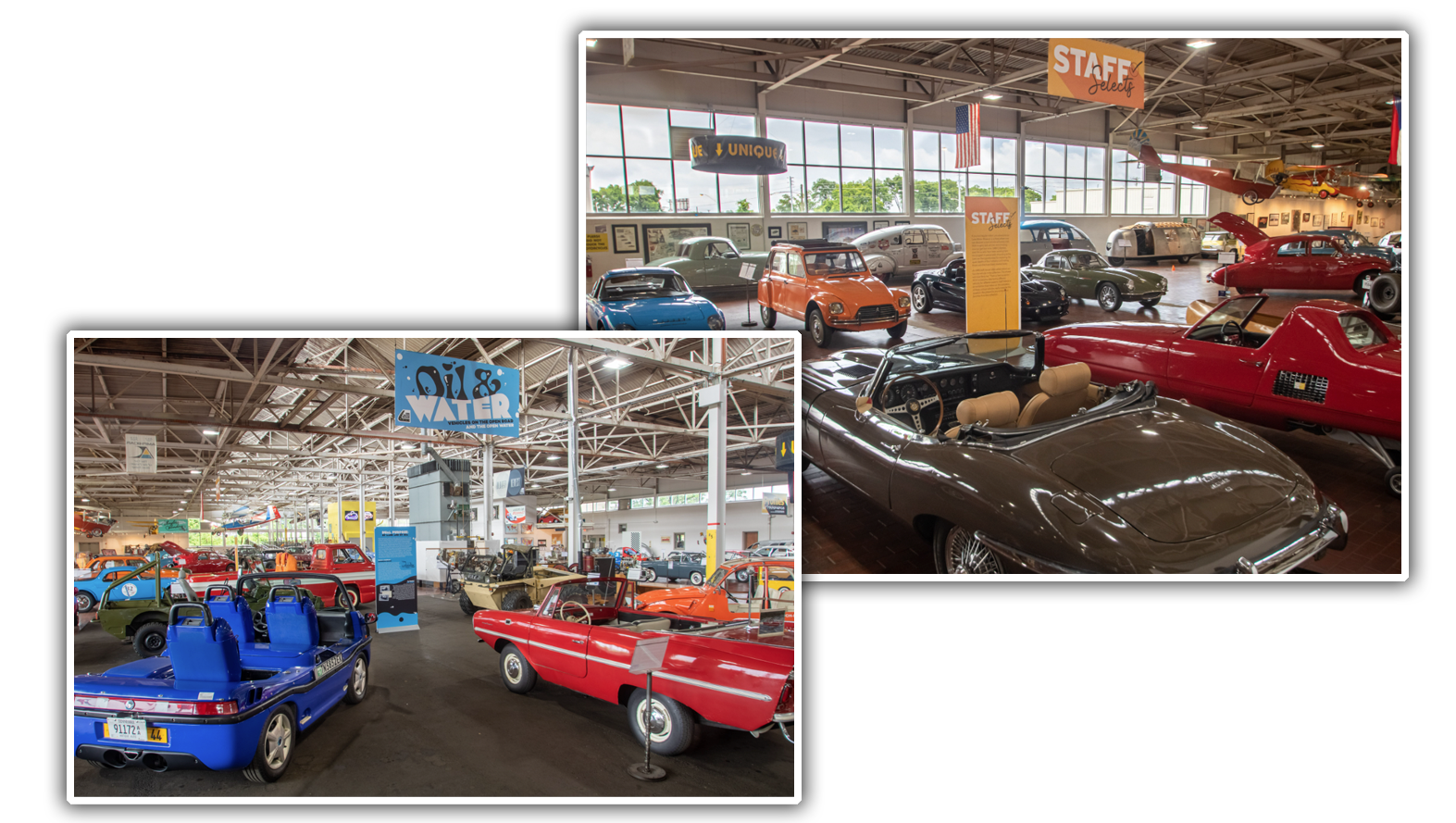 The following week, it was time to switch out two exhibits for one. The “Staff Selects” exhibit and the “Oil and Water amphibious cars” exhibit were both taken out. In their place went “Open and Shut: A Diverse Display of Doors.” The museum’s collection has many cars with interesting closures; among those cars is this 1994 Hobbycar Passport, with its four parallel-opening, double-pivot doors: 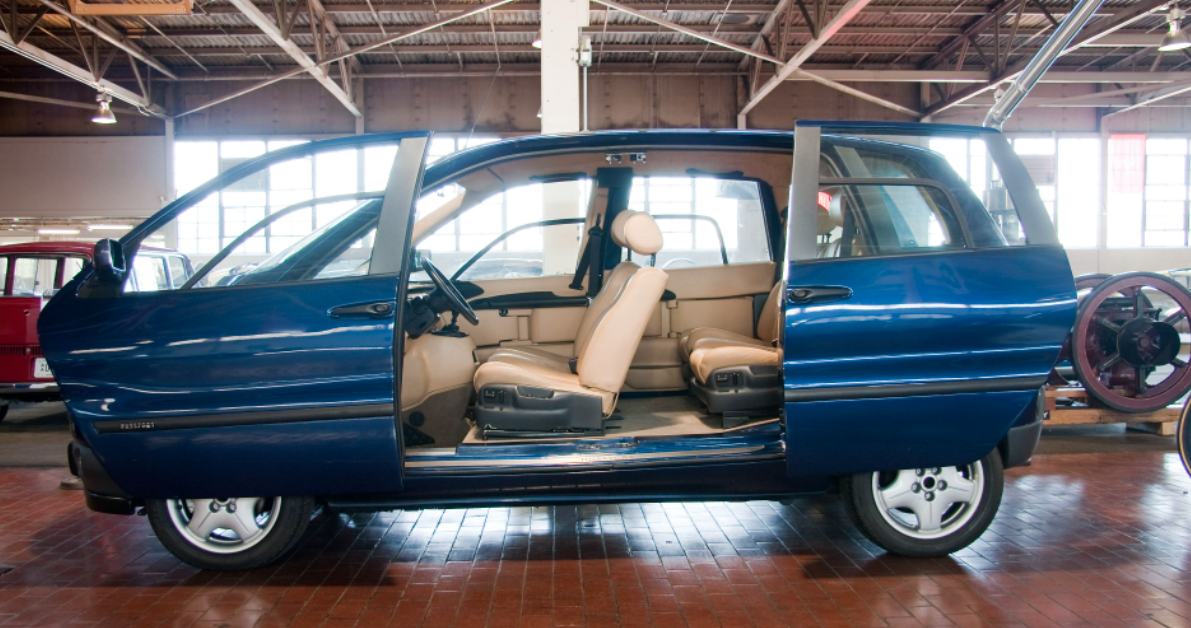 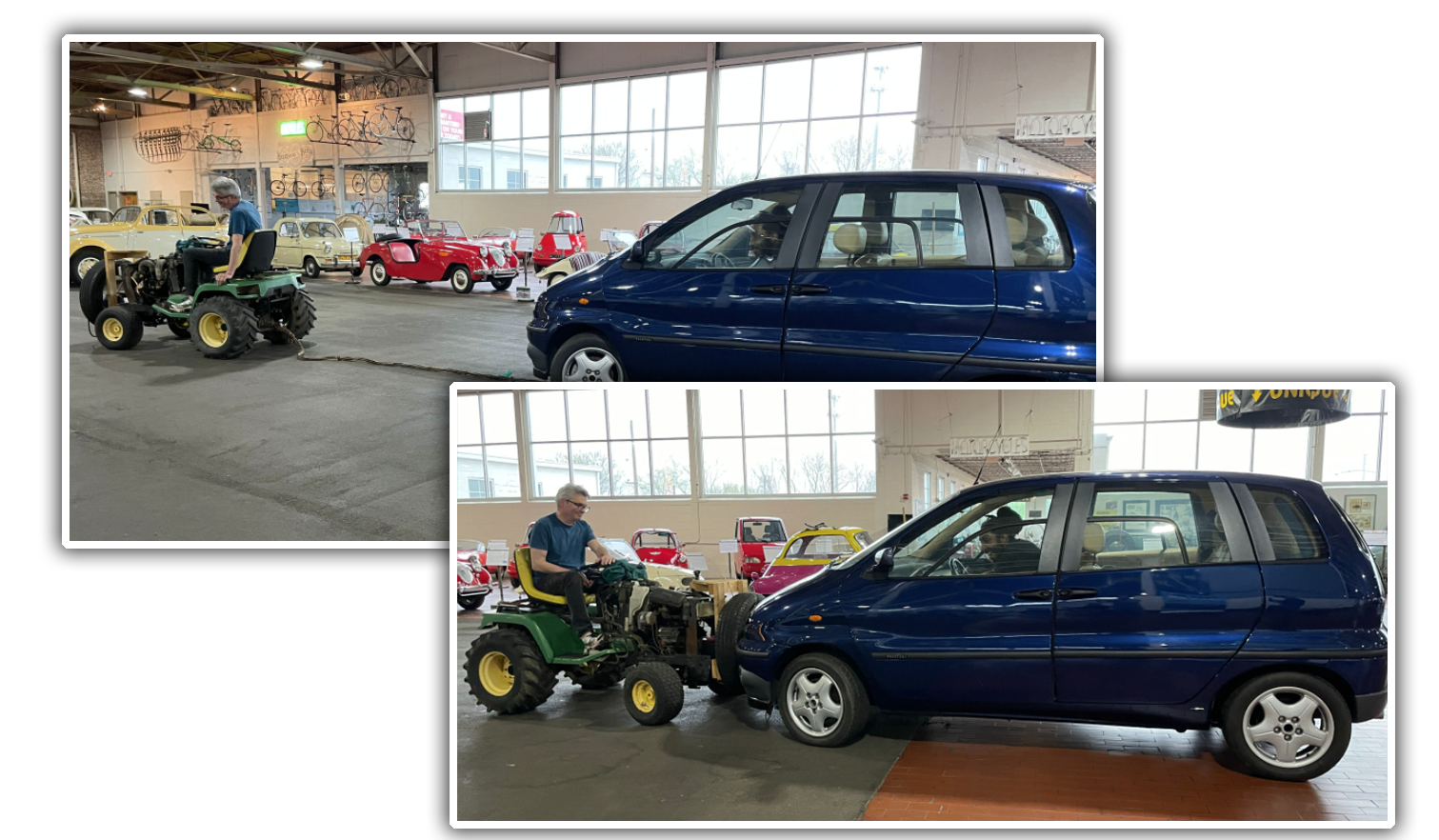 This is a good example of how we tow a vehicle. This old John Deere tractor is basically our tugboat, pulling and pushing cars that do not run. The Peugeot engine in this low production 1990s French “mobile office” does not run well. Yes, we can fix it, but since it is going on display, why put time and effort into something that will just sit static for a year? Next year, it will get some mechanical attention once it leaves the floor (at least that’s the plan).

This is the view from cockpit of the Von Dutch Rocket Car, which runs, but is just easier to pull around. Technically, it has NO doors. James pulls with the tractor, I steer: 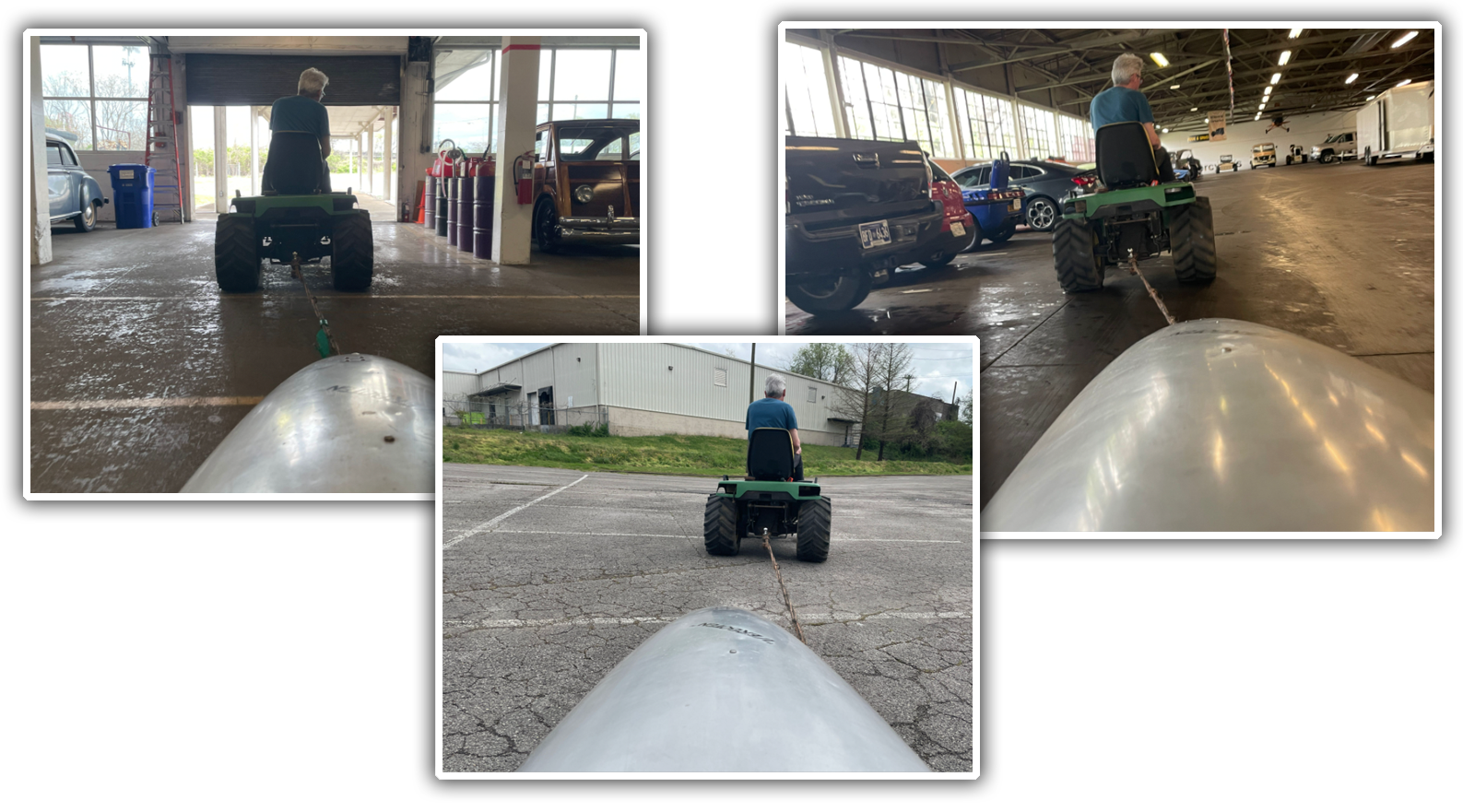 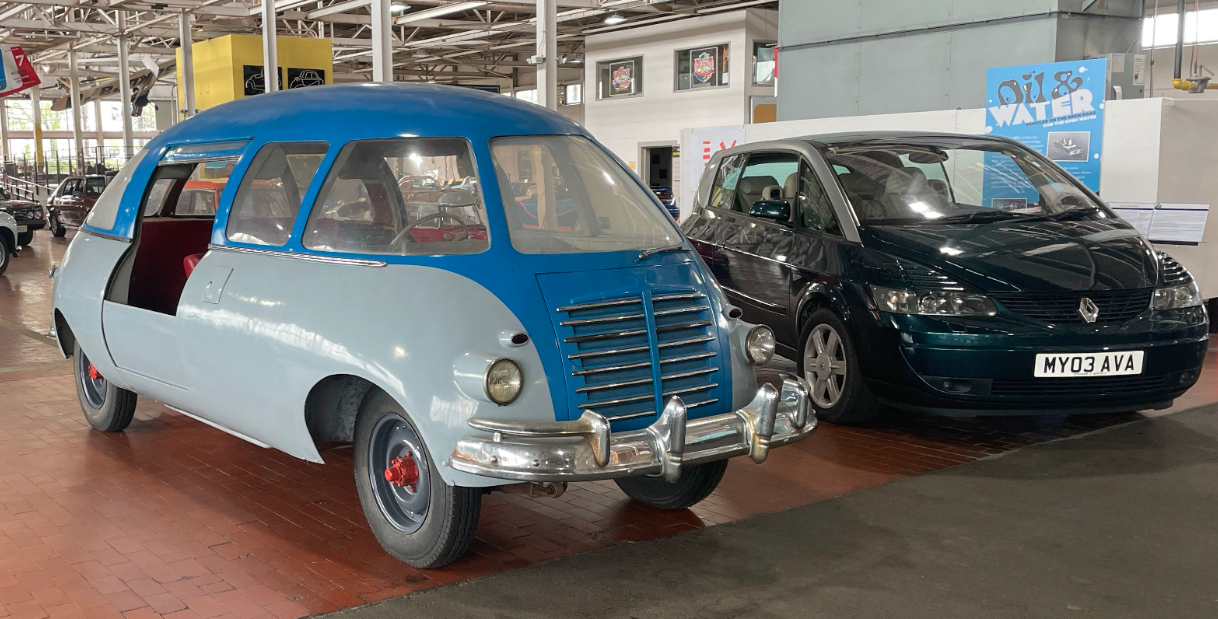 Above are more examples of different doors and hinges. The grey and blue car is the 1945 Surlesmobile, replete with electrically-powered, retractable, hide-away doors. Don Surles was stationed in occupied Japan at the end of World War II, and had this concept turned into reality by the Tokyo Bus Works. The story of the Surlesmobile can be found here.

The Renault next to it is the Avantime that Jason has driven before, in another website’s video, and features a “double-kinematic” hinge system, which maximizes the opening space without swinging the door into the car parked next to you.

Ta-dah! We have an exhibit: 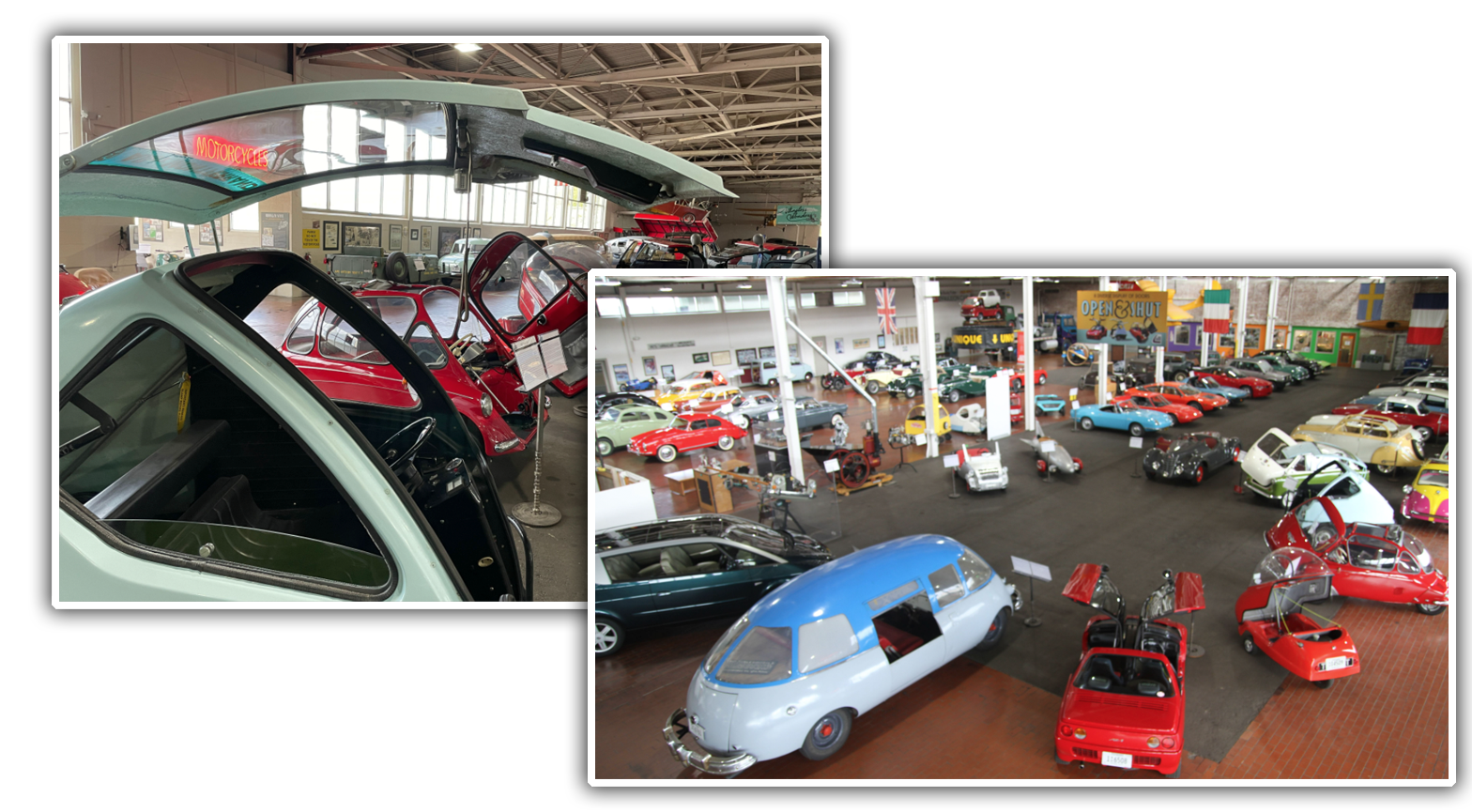 Next up, changing out our propeller-driven exhibit, “Wingless Wonders,” to our prototypes-and-one-offs exhibit, “One of One.” 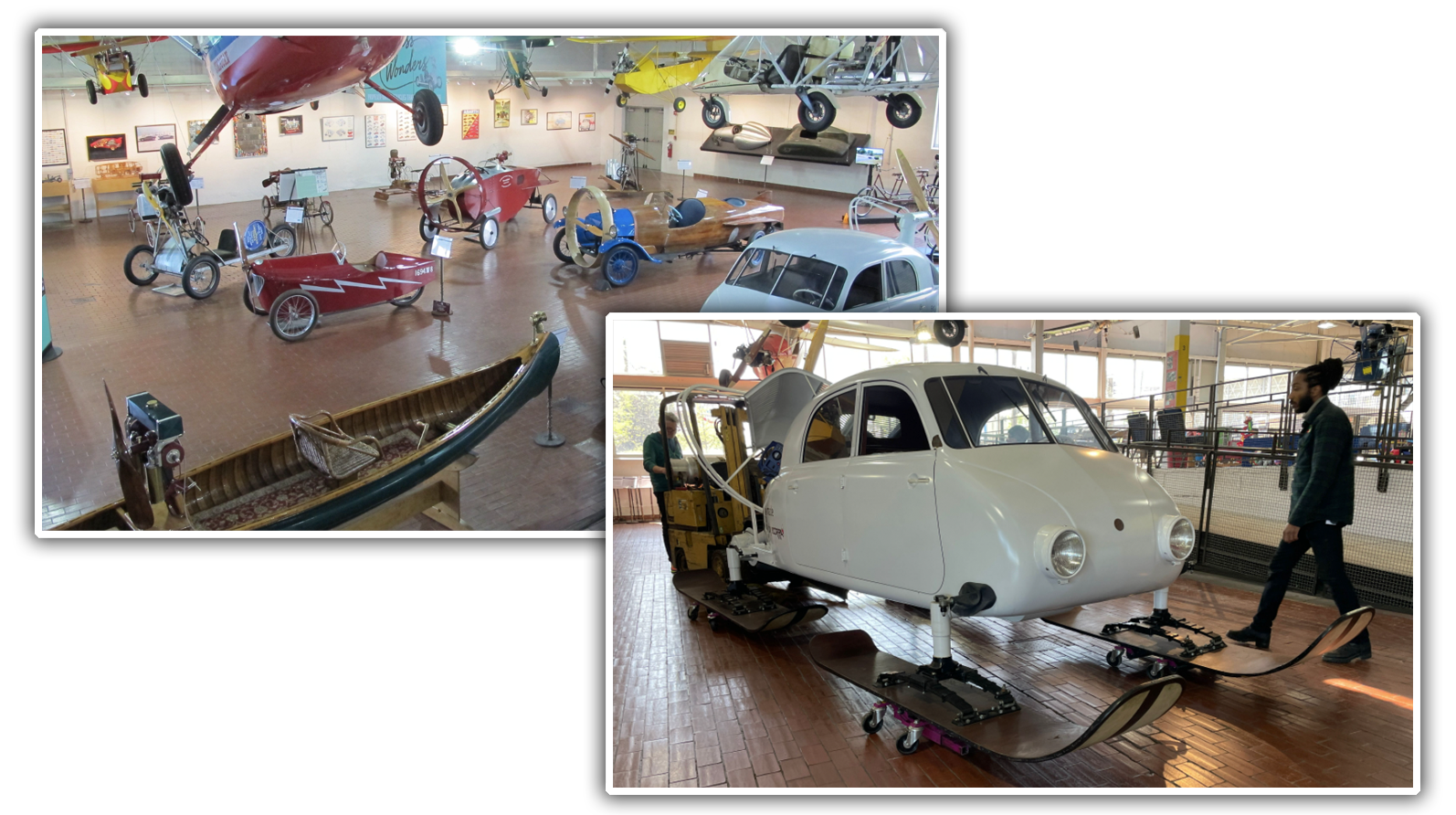 While I missed getting shots of these propeller-driven vehicles coming off the floor (it apparently didn’t take long), there was one complicated move: getting this WWII-era, propeller-driven Tatra-on-skis out to the garage. You know, a normal Wednesday at the Lane. 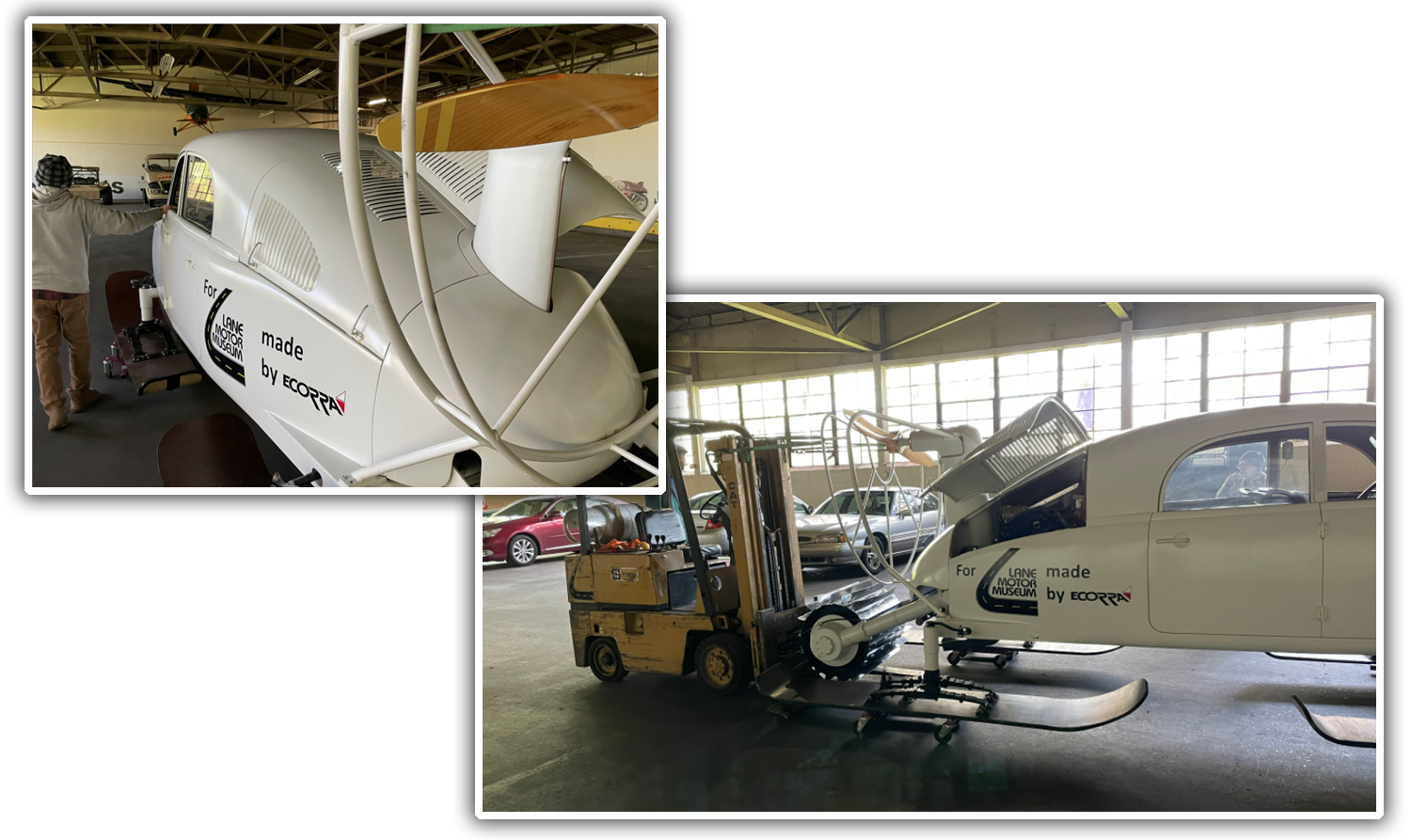 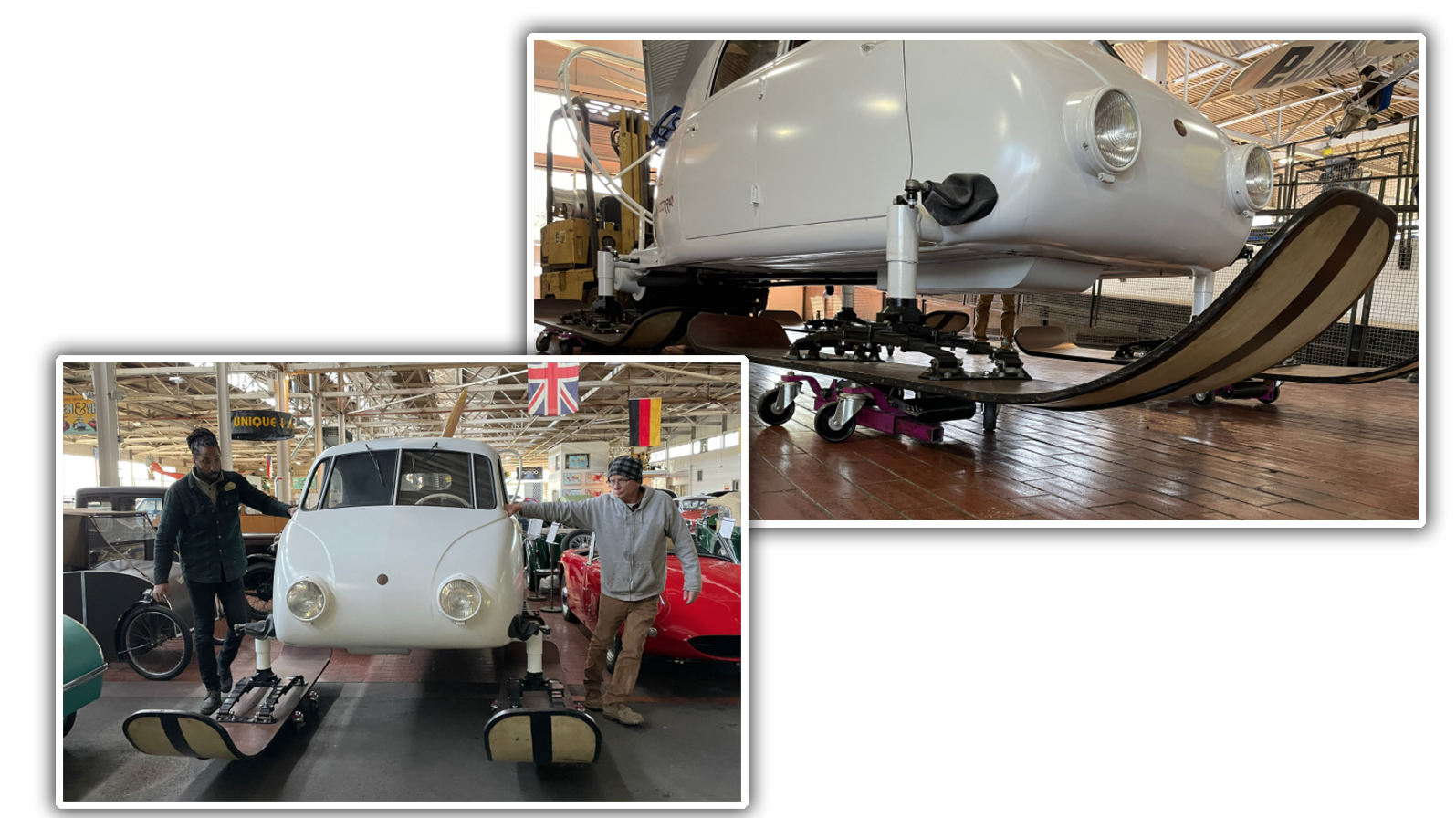 We put the Tatra on skates, which is another tool we use for non-running cars or cars with locked brakes. 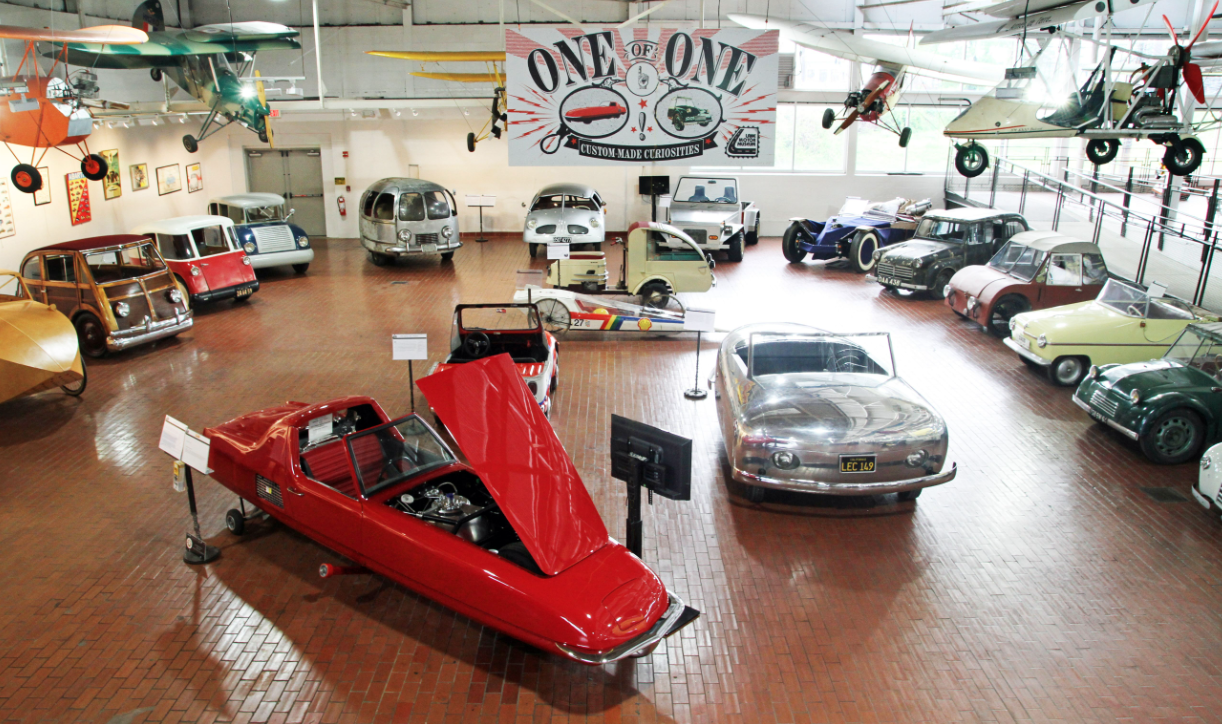 And finally, undoing the Stacked exhibit. Here is the before: 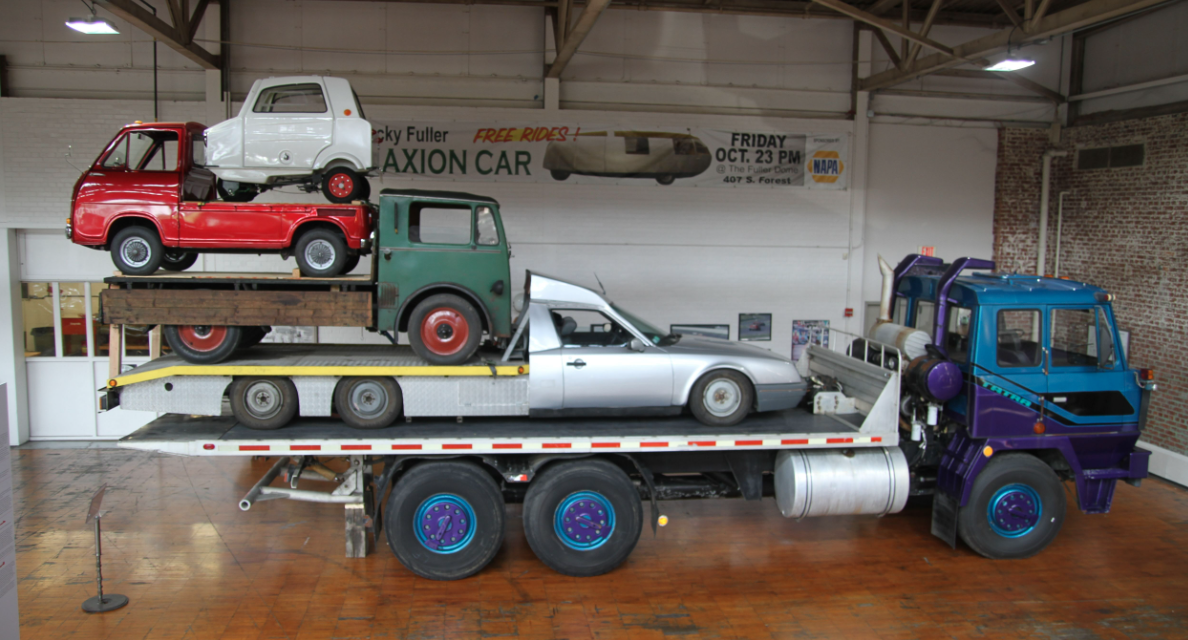 Yes, that’s a Tatra T-815 rollback below a Citroën Tissier rollback, below a 1934 Goliath Atlas pickup, below a Subaru Sambar pickup, with an ACOMA Mini Comtesse in its bed. Here’s a video on how we constructed this behemoth:

Concerned about balance, James and Gabriel knew they couldn’t undo the cars the same way they went together, so the two got our trusty forklift (also an invaluable tool for a car museum), and picked the top two cars off of the Goliath first. 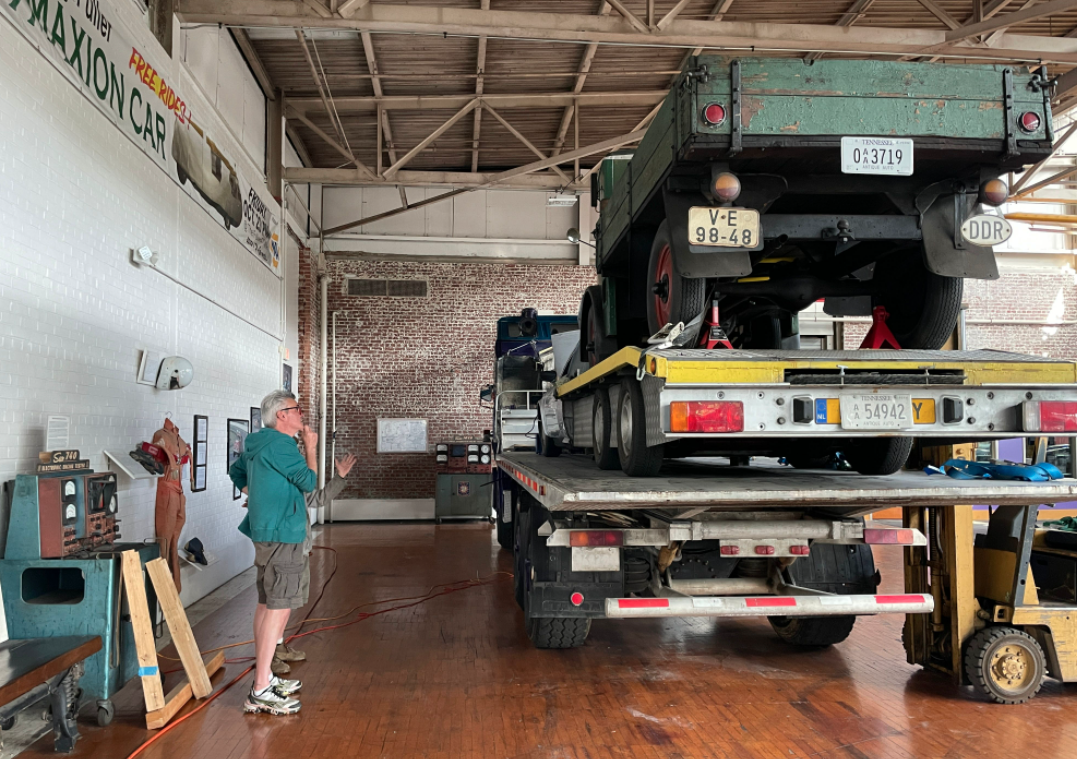 How to do this without damaging the backbone frame of the Goliath? 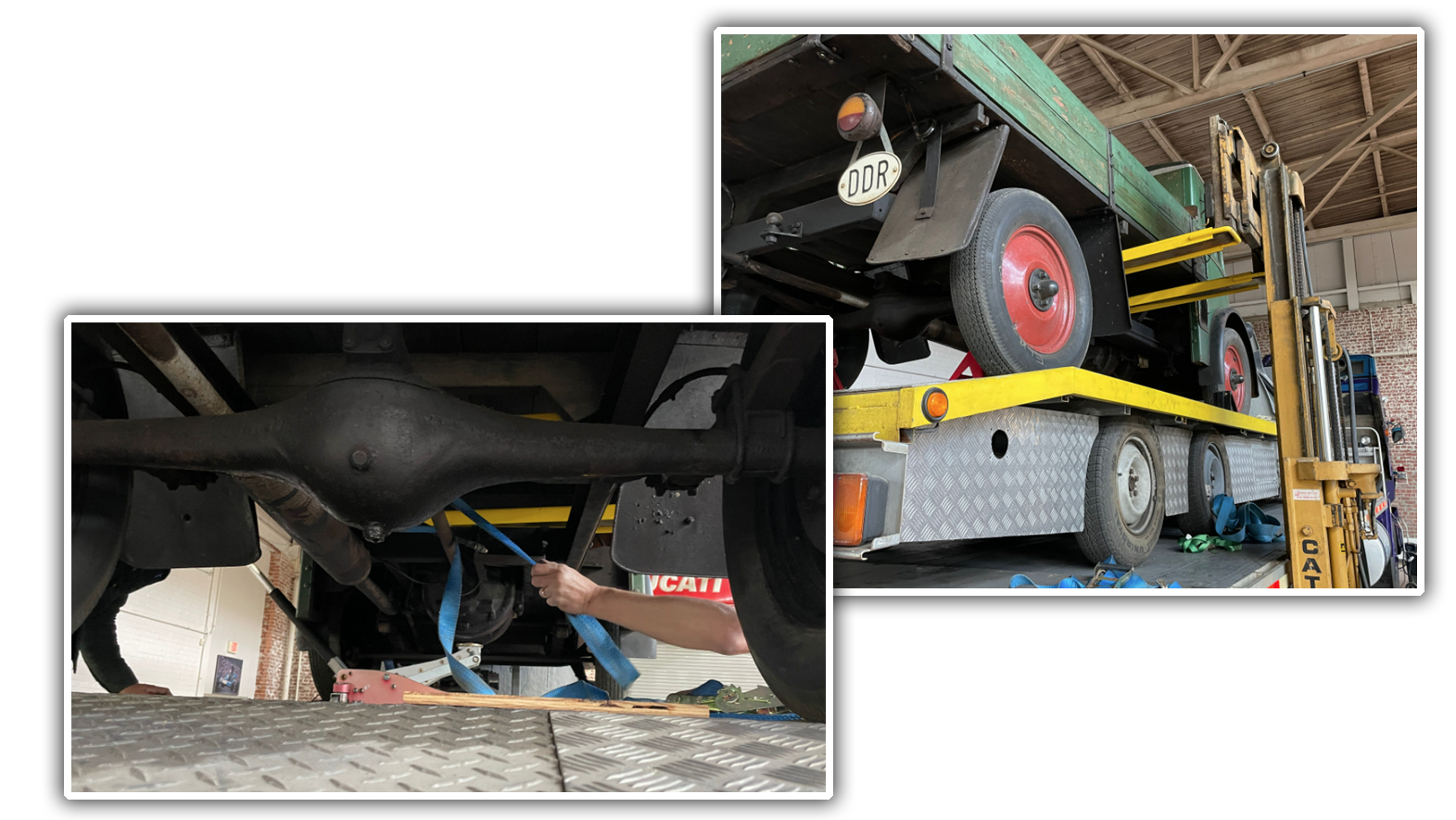 Ratchet straps and a forklift, baby! Have a look:

Whew! In the museum world, that’s called a “buttcocks-clencher.”

The Citroën Tissier is going to chill on the back of the Tatra out in the garage for a bit, like a baby whale swimming atop its mother out to the deep ocean.

And finally, in Stacked’s place we have a flight of Renaults, from the Le Car to the R5 Turbo 2.

This is the condensed version; exhibit planning takes months of work to get the look and fit right, plus it takes time to make sure all the information is as factual as possible. It’s a real production, with many moving parts. It’s not as easy as just getting the toys out of the toy box.