Today, when we think of taking a car to the track, that usually means one of two things: a quick run down a dragstrip or a usually quite expensive and almost always too-short session on an actual racetrack. The truth is that for most people, neither of these are options that are regularly taken advantage of. Both track driving and dragstrips take special sets of skills and they can cause real damage to your car if you’re not sure what you’re doing; they’re great, but for beginners looking to just use a car for fun in a controlled context, there just aren’t many options. But, once, long ago, there was an incredible and strange and probably far more dangerous option: car roller coasters.

A car roller coaster is probably exactly what you pictured when you heard the words: a roller coaster-type track, only with your normal car driving on it. This type of track had the erudite, sophisticated name of Whoopee Auto Coaster, and the first one was built in a Chicago suburb called Lyons, in 1929. 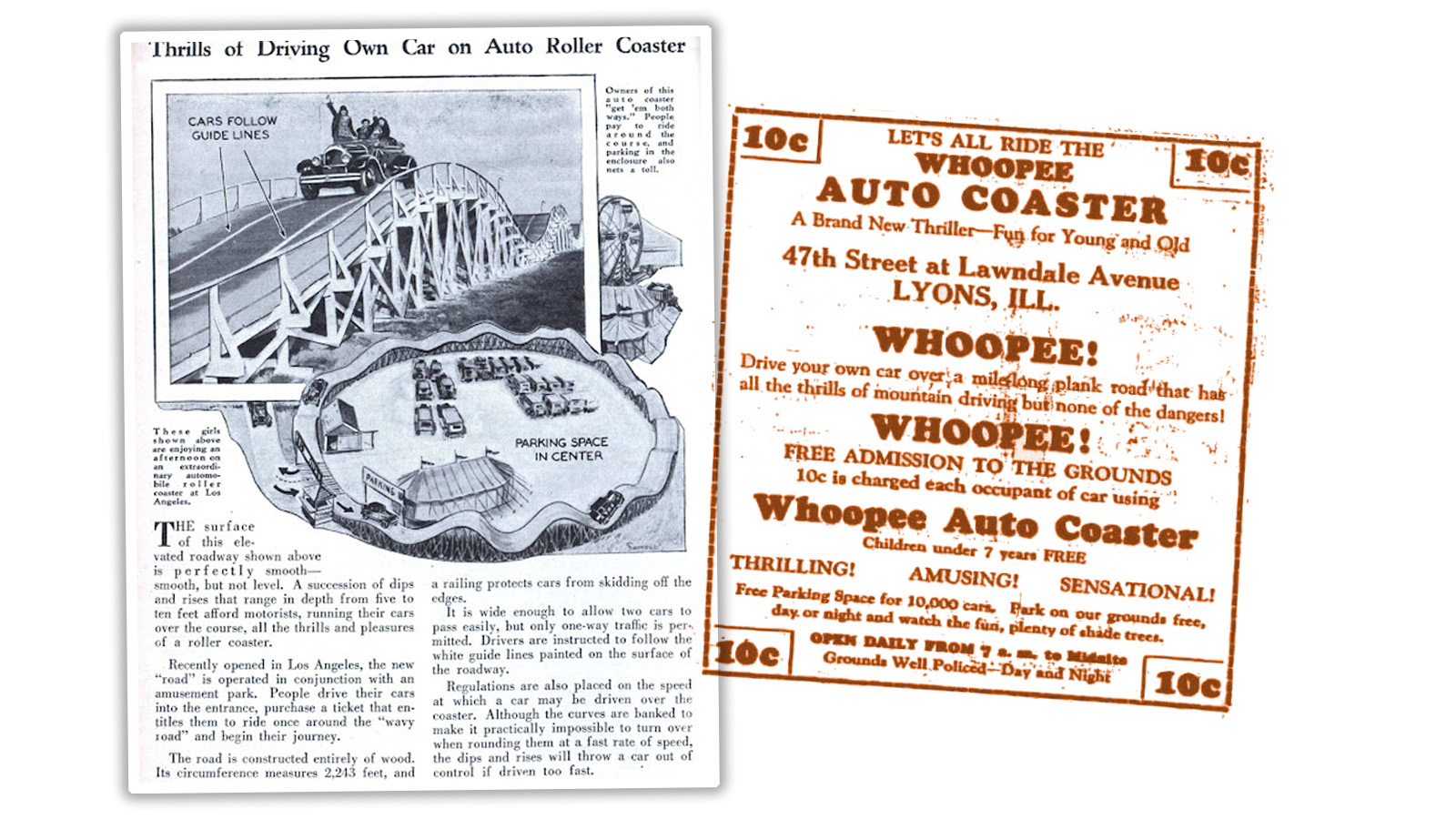 The company that built the Whoopee, the factually-named Coaster Construction Company, built similar tracks in Los Angeles, Detroit, Seattle, Milwaukee, Kansas City, and Camden, New Jersey. These were wooden tracks, with lots of undulating hills and banked turns but, as far as I can tell, no one was daring enough to try to build in any loops.

Some of these coasters appear to have had painted tracks on the, um, track that helped drivers visually guide the skinny tires of those Model Ts and other teens-and-’20s-era cars on the right path for, I suppose, optimum fun and, if we can even really use this word in this context, safety.

An article covering the Los Angeles track described the track, which it noted was built in conjunction with a large, but un-named, amusement park:

The surface of this elevated roadway shown above
is perfectly smooth – smooth, but not level. A succession of dips and rises that range in depth from five to ten feet afford motorists, running their cars over the course, all the thrills and pleasures of a roller coaster.

The road is constructed entirely of wood. Its circumference measures 2,243 feet, and a railing protects cars from skidding off the edges. It is wide enough to allow two cars to pass easily, but only one-way traffic is permitted. Drivers are instructed to follow the white guide lines painted on the surface of the roadway.

Although the curves are banked to make it practically impossible to turn over when rounding them at a fast rate of speed, the dips and rises will throw a car out of control if driven too fast.

I like how the article ends with a bit of a scary warning, and the caption also mentions that the “owners of this auto coaster “get ’em both ways,” because not only do you pay to drive over the loop, you also have to pay to park inside it. Really, that’s not that unreasonable. 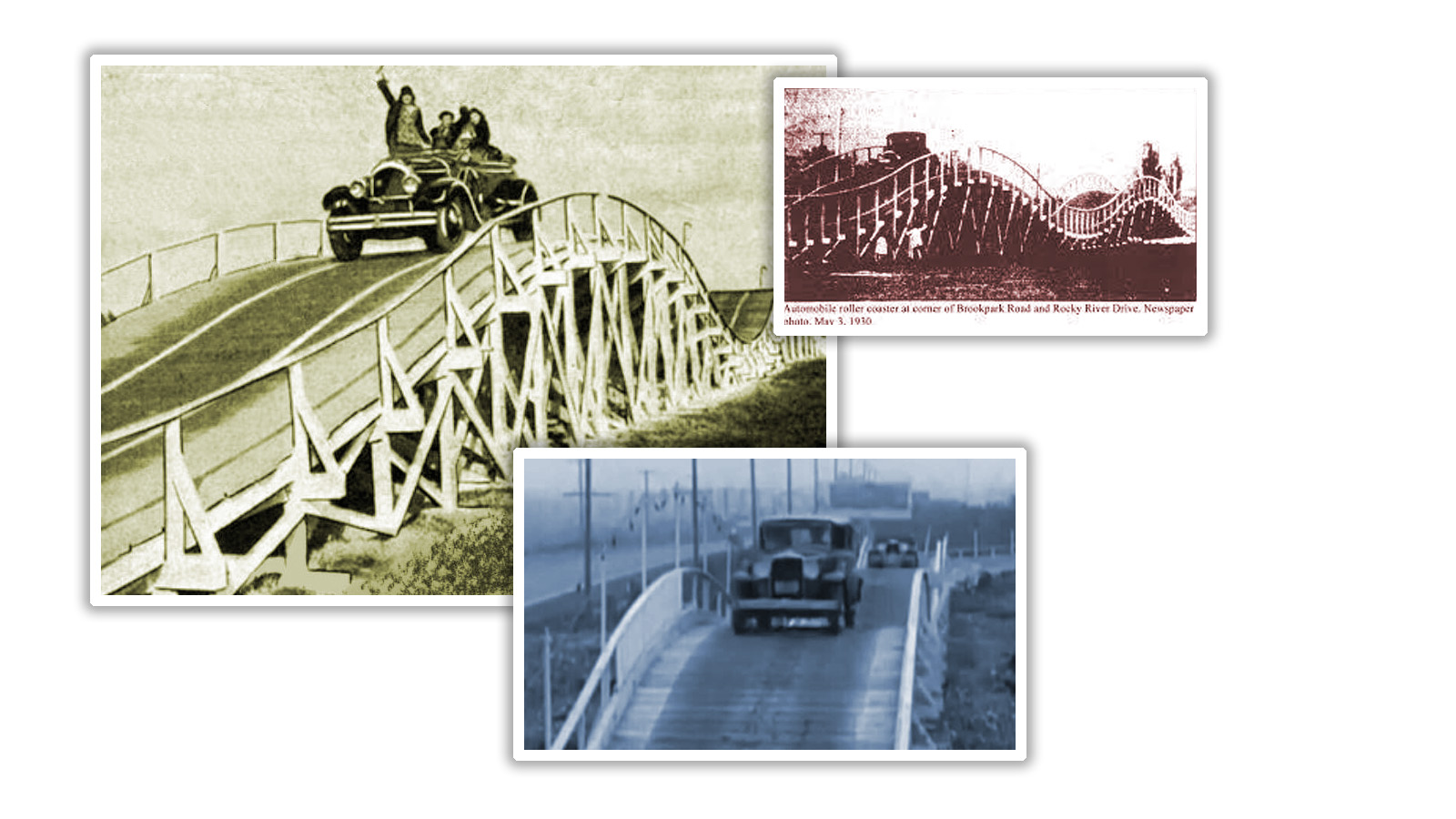 There are wooden railings that I suppose could keep a car safely on the track if speeds remained low enough, but I’d think if you were really cooking all those railings would do is make the coroner add a line about “severe wood splinter intrusion” into the police report.

Some sources mention speed limits on the track, which makes sense, though I’m not exactly sure how they’d have been enforced effectively. A guy with a whistle and a lot of trust in people?

Delightfully, there is some footage of the tracks in action, being enjoyed, which you can see here:

Mostly, the track seems to be a roughly half-mile loop of those undulating hills which I’m sure were pretty fun. The turns were said to be banked enough to prevent a car from rolling over (the video doesn’t show any, but they do seem to have been a part of the layout, since it was loop), and it seems the track is wide enough that if you had to pass a car in front of you, that would be possible.

I’m amazed that there seem to be no records of horrible crashes on these things. The cars were all top-heavy, leaf-sprung things with crappy cable-operated brakes, usually only braking half the wheels involved. And they appear to have allowed multiple cars on the track at once, which you would think would be a recipe for a lot of painful rear-end collisions as a faster car pops up over one of those humps.

Plus, the whole thing is essentially a huge sine-wave bridge made of wooden sticks built by local carnies. Added all up, it feels like a clandestine project from some pro-organ donation cabal, but, incredibly, bloodbaths didn’t happen.

What did happen to kill the project was more basic: when the American and global economy went to shit in October 1929, people were no longer in positions to possibly wreck their cars tearing ass over a series of wooden humps, and the auto coasters died out after 1930.

Could something like this even be possible today? I feel like insurance alone would make it unlikely, and the idea of the driver of the car having total control of speed and steering seems a bit improbable. But, perhaps modern safety technology could let you drive over a bonkers track of some kind with enough safeguards that disaster could be kept at bay. It’d be kind of like the races in that 2008 Speed Racer movie:

But you know, with less fiery crashes, I guess.

I'm a co-founder of the Autopian, the site you're on RIGHT NOW! I'm here to talk to you about taillights until you cry and beg me to stop, which I absolutely will not. Sorry. Hug? Also, David's friend.
Read All My Posts »
PrevPreviousWhat It Was Like Flying In A 94-Year-Old Ford ‘Tri-Motor’ Airplane At The Humongous Oshkosh Air Show
NextJeep’s New ‘High Performance’ Wiper Blades Aren’t A Gimmick, But They Aren’t New Technology Either. Here’s How They WorkNext