Here’s How Toyota Plans To Fix Its First High-Volume Electric Car, Which Was Recalled Due To Wheels Potentially Falling Off 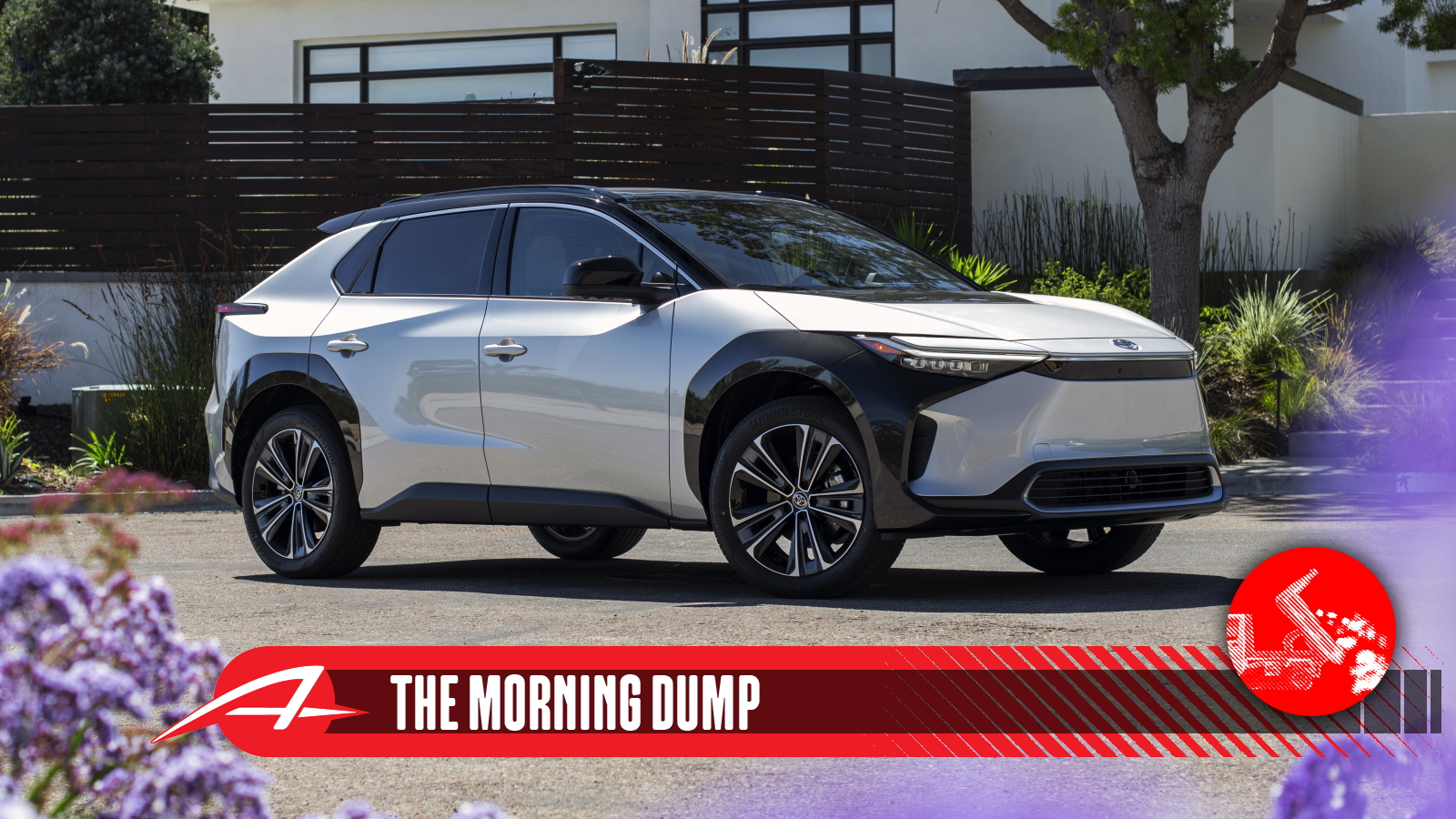 Toyota has a fix for the bZ4X electric crossover, Porsche is now Europe’s most valuable automaker, Ford raises F-150 Lightning’s starting price again. All this and more in today’s issue of The Morning Dump.

Toyota Figured Out A Fix For The bZ4X

It’s taken months, but Toyota is finally able to resume sales of its bZ4X electric crossover. If you need a refresher on this alphanumeric soup of a vehicle, don’t worry. We’ve got you covered. Just as Toyota released its first in-house, high-volume electric vehicle for the U.S. market, the wheels literally fell off. According to Toyota’s official defect information report, the Japanese manufacturer found that “After low-mileage use, all of the hub bolts on a wheel can loosen to the point where the wheel can detach from the vehicle.” Toyota ended up offering buyback packages and other compensation like loaner vehicles with free fuel due to this issue of wheels coming loose. It was a disaster, but Automotive News reports that it should finally be over.

Production of the remedied bZ4X was to set resume on Thursday, Toyota Chief Technology Officer Masahiko Maeda said while announcing the fix. Sales in Japan will restart Oct. 26.

U.S. sales will reopen shortly, Maeda said, without offering a concrete timeline. In overseas markets including the U.S, we will resume the sale in a sequential manner,” he said.

The defect stemmed from not accounting for the high torque exerted on the wheels by the car’s all-electric drivetrain. The wheels are attached with hub bolts, but even in low mileage use, the wheels can come loose due to vigorous driving – such as turning sharply or braking aggressively.

The problem was exacerbated by the extra weight of the EV’s lithium ion battery pack.

The fix is rather simple. Here’s word of a remedy, directly from Toyota’s mouth.

Hub bolts with washers require a complete wheel bolt redesign to retain thread turns. New wheels are supposed to feature increased friction of the wheel mating service so it grips the hub nicely. It’s definitely strange and confidence-shaking that Toyota overlooked the wheel bolts and mating surfaces on the bZ4X, but a return to showrooms is exactly what Toyota needs given the company’s slow-moving EV plans.

While an initial price dip is expected with any IPO, Porsche’s back on the upswing quite quickly. Reuters reports that the sports car brand is now the most valuable car manufacturer in Europe.

Although Porsche shares had fallen below its listing price on Monday to 81 euros, in line with a wider fall in markets, they had risen to 93 euros ($91.95) at 1023 GMT, giving the sportscar brand a market valuation of 85 billion euros.

Porsche’s share price regained momentum after investment banks involved in its flotation had purchased almost 3.8 million shares for 312.8 million euros as part of the so-called greenshoe option, designed to support a listing.

The rise pushes Porsche’s valuation beyond Volkswagen’s 77.7 billion euros. Mercedes-Benz DE> comes in third among European carmakers with a 57.2 billion euro valuation, followed by with 47.5 billion euros and Stellantis with 39.7 billion.

Overall, it’s a neat flex for Porsche, although valuation isn’t exactly the most meaningful metric in the world. All it really shows is strong investor confidence, unsurprising given Porsche’s prominence.

The Ford F-150 Lightning Gets Another Price Hike

Ford is once again raising the price of its F-150 Lightning electric pickup truck, although this time it’s only on the base model. Pricing for the fleet-spec Pro trim is up to $53,769 including a hefty $1,795 freight charge. That’s $5,000 more than the price announced in August, which in turn is up $7,100 from the original starting price from when the Lightning first launched. Automotive News was first to break this story, and it reached out to Ford for comment, receiving a fairly standard response.

The spokesman said the Pro trim was the only model to see an additional increase for now, citing “ongoing supply chain constraints and rising material costs.” He said Ford would continue to monitor pricing.

The automaker said that inflation-related supplier costs during the third quarter will run about $1 billion higher than it had expected. Separately, it expected to finish the period with 40,000 to 45,000 unfinished vehicles waiting on parts, most of which will be high-margin pickups and utility vehicles.

Ford likely wants to keep its balance sheet on as even a keel as possible, and increasing base prices is just one tactic the company can use. However, increasing base prices can come at a cost. While the F-150 Lightning definitely features a more traditional form than the upcoming Chevrolet Silverado EV, if Chevrolet sticks close to the projected $40,000 base price, the bowtie electric truck should really put a squeeze on Ford.

The car business is often a predatory one, so it’s not exactly surprising to hear Reuters report that GM Financial has allegedly broken the law in a big way.

GM Financial was accused of violating the Servicemembers Civil Relief Act by illegally repossessing 71 servicemembers’ vehicles and by improperly denying or mishandling over 1,000 vehicle lease termination requests, the Justice Department said in a statement on Wednesday.

GM Financial has agreed to pay $3.5 million to the affected servicemembers and a $65,480 civil penalty to the government, the Justice Department said, adding that the company will pay at least $10,000 to each of the 71 servicemembers who had their vehicles unlawfully repossessed.

Allegedly mishandling more than 1,000 lease termination requests seems absolutely insane, and an effective fine of around $3.5 million dollars feels like a slap on the wrist considering how much of a nightmare this may have been for customers. What’s more, this settlement only covers servicemembers. What about members of the general public? Did they also allegedly get shafted by GM Financial?

Whelp, time to drop the lid on today’s edition of The Morning Dump. It’s Thursday, which means that the weekend is just around the corner. Today, let’s talk tools. Beyond the normal sockets, spanners, impact wrenches, and grinders, what specialty tool has saved you the most time and headache in the garage? I might have to go with trim removal tools on this one, for properly removing panels without breaking interior clips has saved me a ton of time running around for replacement clips. What’s your lifesaving specialty tool?

Thomas is a Nu Rave-blaring, heel-toe downshifting, maple syrup-swilling, chassis-geeking, junkyard parts-hauling, floppy-haired scenester who's been writing about cars since college. His current ride is a 2006 BMW 325i with the six-speed manual gearbox. Instagram: @thomas.hundal Twitter: @thomashundal
Read All My Posts »
PrevPreviousThe New 2024 Honda Prologue EV May Not Look Exciting, But It’s Handsome And Gets A New Badge
NextThe Most Powerful Locomotive In America Was So Loud It Was Banned From Cities And So Hot It Melted Pavement. Here’s A Close LookNext