Facebook-f Twitter Instagram Rss
Menu
Menu
Home » Toyota Hoped The bZ4X EV Would Usher The Brand Into The Electric Era. Then The Wheels Fell Off

Toyota Hoped The bZ4X EV Would Usher The Brand Into The Electric Era. Then The Wheels Fell Off

It’s no secret that Toyota has a pretty big problem with its new bZ4X electric crossover, the company’s first high-volume electric car in the U.S. With no fix for the EV’s wheel bolt woes in sight, Toyota’s now offering buyback deals to American bZ4X owners. Toyota has sent owners a letter regarding these buybacks, and here’s what is has to say.

…Toyota will offer to repurchase your vehicle. The terms for the repurchase may vary, depending on your state and particular circumstances.

In addition, the compensation package for bZ4X owners who wish to keep their vehicles has grown to be quite vast. We’re talking about a free loaner vehicle, reimbursement for fuel for said loaner vehicle, a $5,000 credit on the vehicle, complimentary charging at EVgo stations through 2024, and a warranty extension.

More details on compensation can be found in the above letter, confirmed by Engadget to be legitimate. As for American owners of the bZ4X’s Subaru Solterra twin, they might not really exist yet. The initial NHTSA recall report states that “Subaru has informed Toyota that no Solterra vehicles have been sold to dealers or retail purchasers.” So how did we get to the point where Toyota needed to send a buyback offer to bZ4X owners? Well, it’s a little bit complicated.

First, let’s define the issue Toyota’s having with the bZ4X. While “hub bolts” is the terminology most associated with this issue, it’s worth clarifying that the recall has to do with wheel bolts like you’d find on many European cars. Should these bolts back off, the wheel would detach from the hub, rather than the hub detaching from the knuckle. Subaru issued a lovely diagram detailing the issue, which I’ve inserted above. It’s very strange language in an age of bolt-on hub assemblies, but that’s the way it goes sometimes. So how did Toyota find out about this issue? Let’s take a look at the defect information report uploaded to the NHTSA website.

Toyota received a field technical report from the Taiwan market indicating separation of the front left wheel from the vehicle. Toyota recovered the wheels and hub bolts from this vehicle for investigation.

Toyota then received two field technical reports from the U.S. market. One of the reports indicated loose hub bolts of the front left wheel and the other indicated a separation of the front left wheel from the vehicle. Toyota reviewed the production process at the vehicle assembly plant and did not identify any abnormalities on the hub bolt tightening history of these three vehicles. Toyota also reviewed the assembly process of the wheel and hub bolts at the assembly plant and did not identify any abnormalities. In addition, although damage was observed on the wheel recovered from the vehicle in the Taiwan market, the damage was believed to be a result of the wheel separating from the vehicle and the cause of the loosening of the hub bolts was not able to be identified. Toyota continued to investigate and conducted a driving test using mass production wheels and hub bolts that were tightened to specification. The testing showed that the hub bolts loosened under certain severe driving patterns.

Wow, that’s not good. Toyota recalled the bZ4X in late June, which means that we’re more than a month in without any updates on a potential fix. At the time, owners were advised to avoid driving their new electric vehicles, so all affected models should still be grounded for now. It’s more than a little bit weird that Toyota didn’t discover this issue during development. From climate testing to final calibration, development engineers often puts tons of miles on prototypes. Given how early we are into the production run of the bZ4X and its Subaru Solterra twin and how these failures have occurred on low-mileage examples, shouldn’t self-loosening wheel bolts have been caught and corrected? 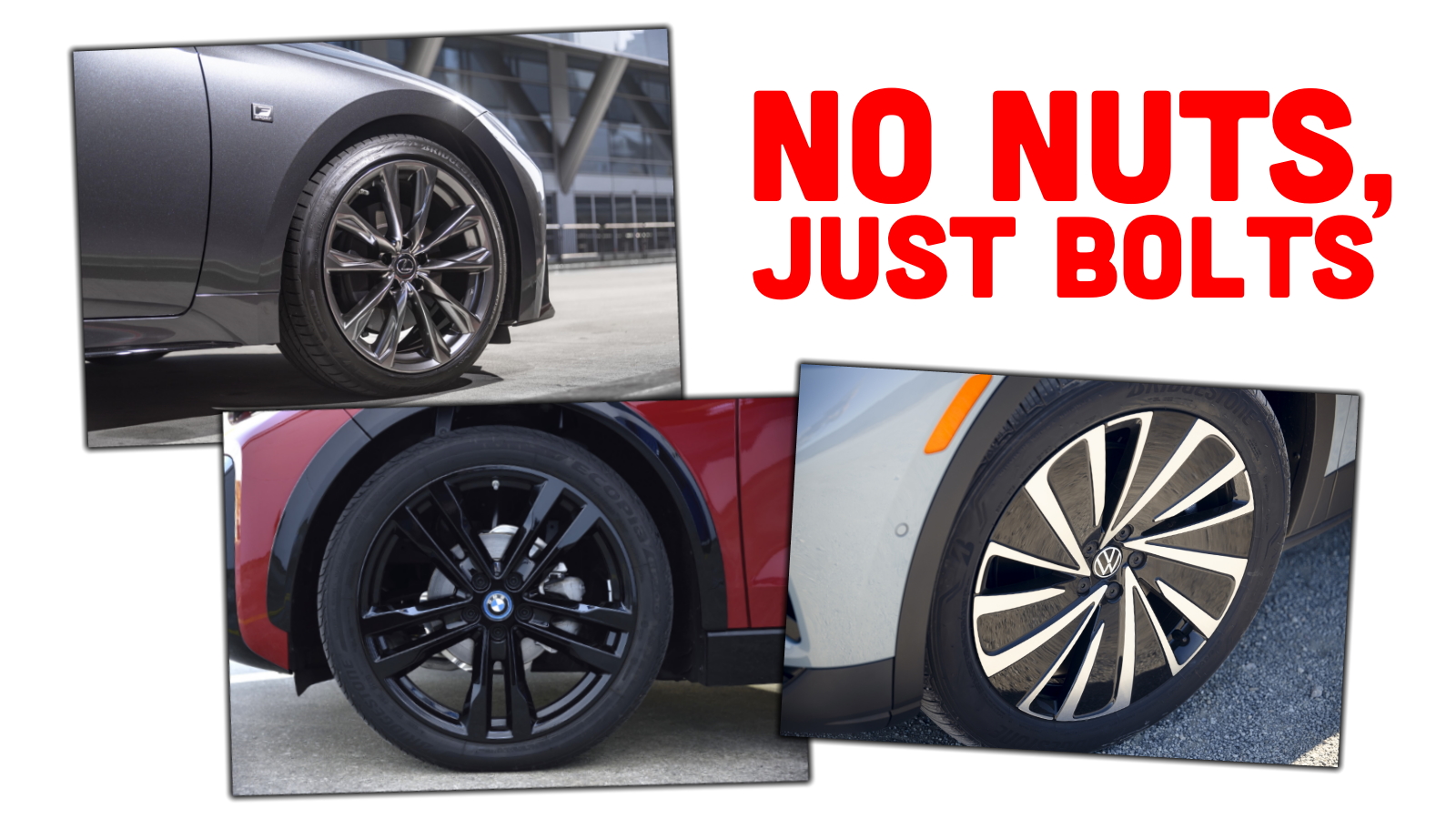 Weirder still, this isn’t Toyota’s first attempt at using wheel bolts instead of studs and nuts. For instance, current Lexus IS models in non-V8 trim and the Lexus NX 350h use wheel bolts with a part number of 90942-02090. Plus, other automakers have used wheel bolts on EVs without issue. The BMW i3 and Volkswagen ID.4 immediately come to mind. There’s no real reason why the use of wheel bolts might create more issues than a stud and nut arrangement, so the nature of the defect is quite puzzling. As it sits, Toyota doesn’t have a fix for the bZ4X despite the initial defect report having been issued more than a month ago. So what gives? Well, a fix could require new hardware and additional testing, which may push back the timeline for a solution. Plus, if any component changes are required, today’s tight supply chain might affect Toyota’s ability to procure new components.

In any case, this recall is a bit of a disaster for Toyota. While the Japanese brand has dabbled in compliance EVs like the Scion iQ EV and both generations of the RAV4 EV, Toyota’s generally dragged its feet on producing a mainstream battery electric vehicle. With an incoming EV offensive, the bZ4X was supposed to be the flag-bearer, but its failure to launch has tainted Toyota’s reputation in EV circles. While a bad reputation in EV circles may not seem like a huge deal to some, it’s worth noting that EVs are often enthusiast vehicles. They may not pack the tire-shredding boisterousness of muscle cars or the poise of mid-engined sports cars, but EV owners are passionate, informed, and often the first point of peer-to-peer EV advice for many potential buyers. This bZ4X wheel bolt recall is on par with Ford Focus RS head gasket issues and likely won’t be good for Toyota in the long-run. We’ll continue to watch the bZ4X recall closely. Hopefully owners who wish to keep their Toyota EVs can find some form of resolution soon.

Thomas is a Nu Rave-blaring, heel-toe downshifting, maple syrup-swilling, chassis-geeking, junkyard parts-hauling, floppy-haired scenester who's been writing about cars since college. His current ride is a 2006 BMW 325i with the six-speed manual gearbox. Instagram: @thomas.hundal Twitter: @thomashundal
Read All My Posts »
PrevPreviousOur Daydreaming Designer Solves Cadillac’s Problem From 40 Years Ago
NextThe U.S. Government Plans To Slice $7,500 Off Electric Car Prices, But It’s ComplicatedNext