Our Daydreaming Designer Solves Cadillac’s Problem From 40 Years Ago

If there is any one car that destroyed decades of equity in a brand, it has to be the Cadillac Cimarron. Often featured on those “Worst Cars of All Time” lists, it really doesn’t belong there, but it IS a great example of a large corporation finding out that the buying public isn’t as dumb as the company thinks.

Cadillac knew it needed to make a smaller “international” sized car back in the seventies, and its first attempt was the Seville…a clean, nicely proportioned sedan that was several feet shorter than the next smallest Cadillac. Despite being based heavily on the proletarian compact Chevy Nova, General Motors priced the Seville as the second most expensive Cadillac, and it sold surprisingly well. The sedan had a live axle on leaf springs in back, and you initially had to have a vinyl top to cover the add-on pressings to the Nova roof, but buyers didn’t seem to care. GM raked in the profits.

However, GM pushed its luck with this formula a few years later, with buyers that were now more sophisticated and really DID care. To lure the younger Three Series crowd, GM offered a Cadillac version of the Monza/Vega replacement J-Car, which was about as far from a Bavarian-bred machine as possible. It was called the Cimmaron. While the Seville looked nothing like the Nova on which it was based, the Cimmaron looked every bit the Cavalier that it was. Oh, did I mention it charged nearly twice the price of the Chevy?  This really marked the beginning of Cadillac’s long downward slide during the 1980s. 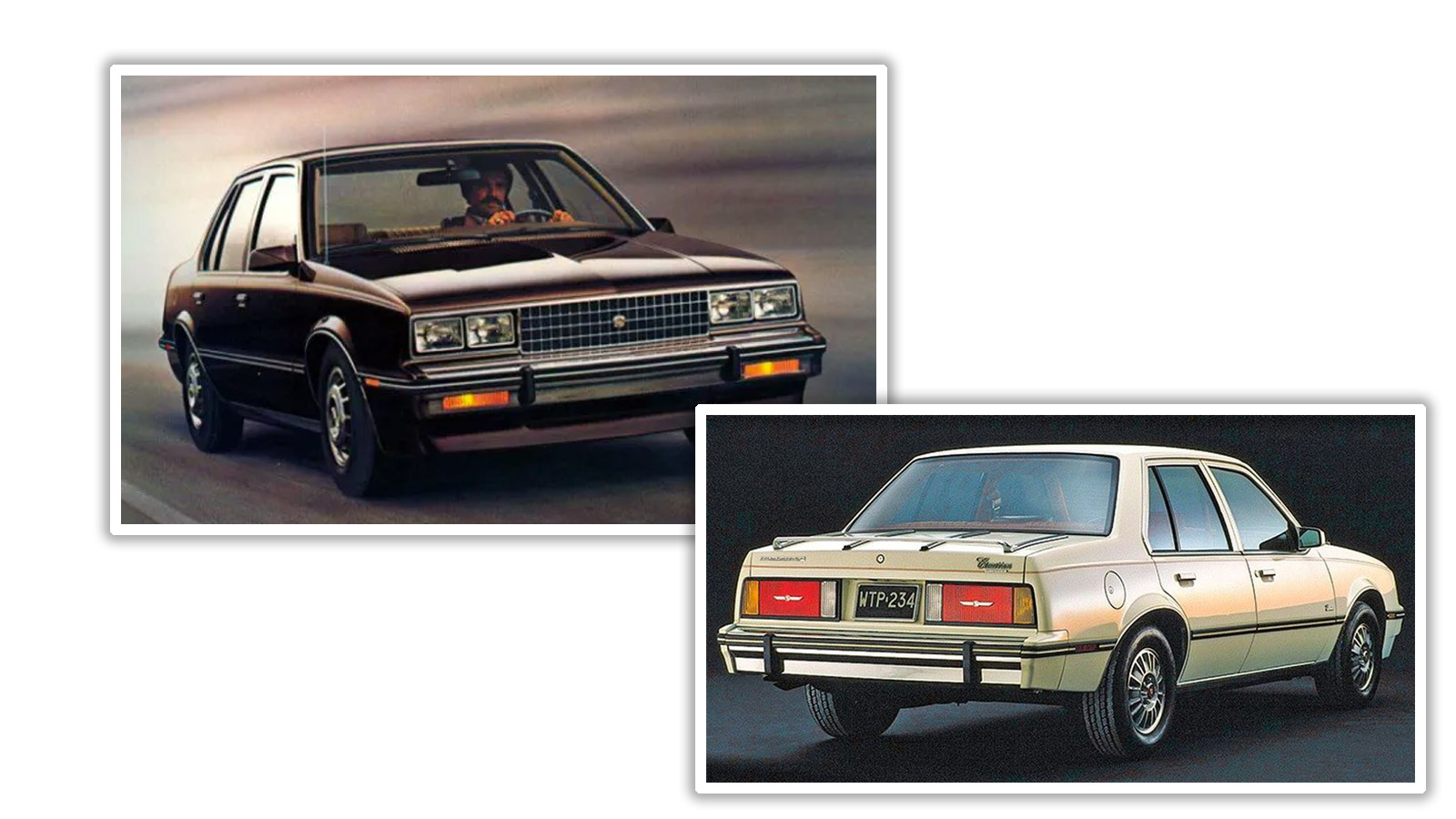 It didn’t have to be this way. What is amazing is that GM actually had some nice production cars and great designs for concepts right under its nose. The brand’s European division that could have been implemented as credibility-building Cadillacs…but GM’s top-tier marque didn’t do it.  What’s worse is that it let some OTHER guy do essentially that, but with his own brand.

It all started with the Opel CD, a concept coupe that GM design star Chuck Jordan created in 1969, and I think it’s a slick-as-hell design. With a wreath-and-crest badge, this could have been like a seventies CTS coupe, givving Caddy some Maserati mystique.  You just KNEW that GM would nix it, the reason possibly being Because Corvette. (Bob Lutz worked on making a more production-friendly version before it all got shot down). Once it was nixed, an Austrian ex-racer and future car-maker named Erich Bitter was encouraged by GM to build the thing himself, which he did as the didn’t-even-change-the-name V8 Opel Senator-based Bitter CD: 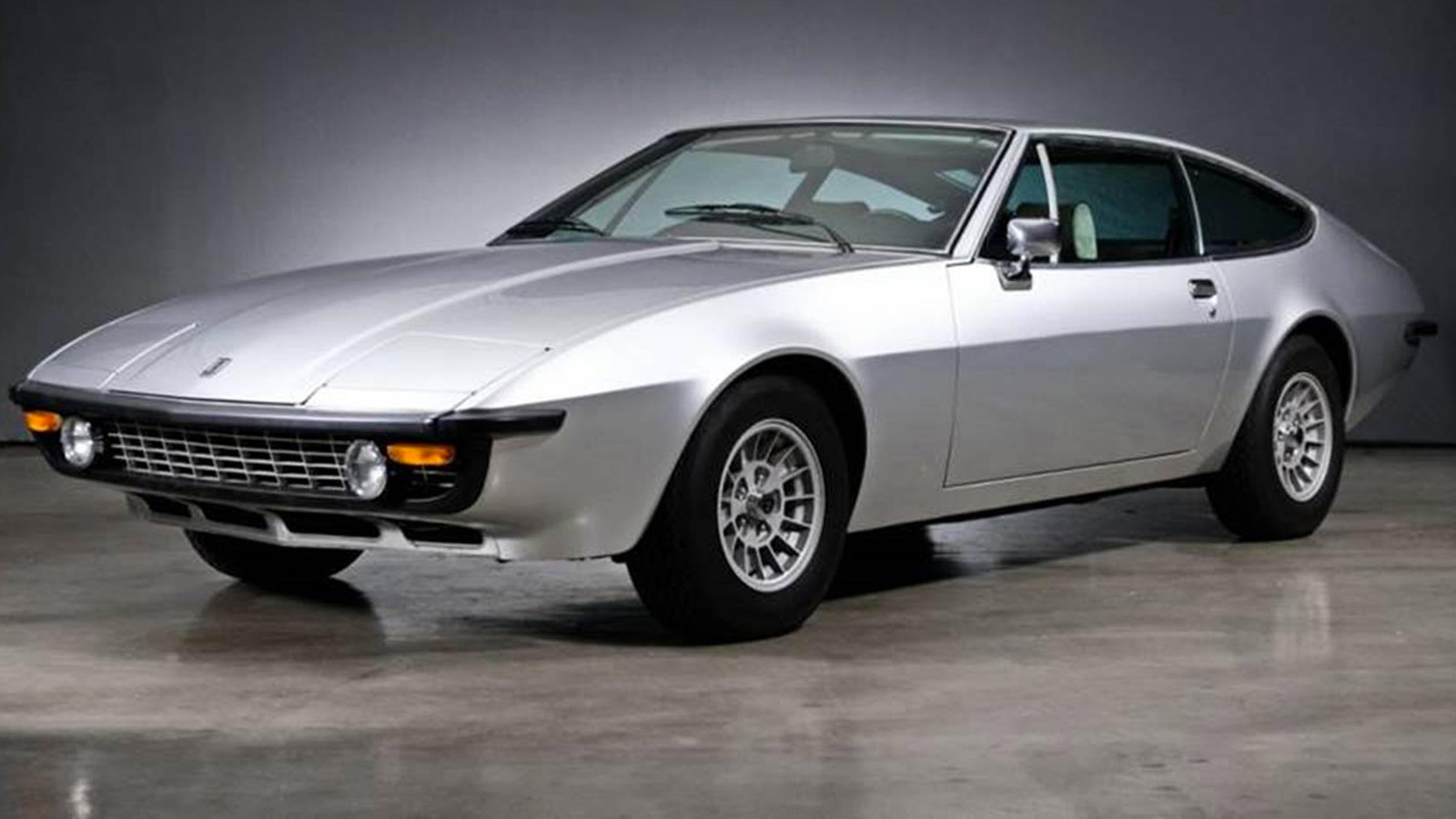 Next, however, Bitter had a design in mind for a luxury coupe, and GM would again offer mechanicals and interior components from the upcoming redesigned Open Senator/Monza on what became the Bitter SC.  Supposedly Erich “designed it himself.”  Uhh…sure:

Initially Erich Bitter considered a design embodying strong frontal overtones of the CD with a more practical, but less attractive, back half using a more compact estate car style. Bitter dropped this concept in favour of the rough SC design which he sketched in the late sixties. Bitter’s design was finally refined for production by Opel stylists Henry Haga and George Gallion.

I don’t claim to know Erich Bitter’s design skills, but I seriously question this merely “refined for production” statement, since the overall look of this thing seems to VERY closely follow the design language of Hank Haga’s Senator/Monza on which the SC is based (see below..the Bitter’s doors are right off of the Monza).  I would venture to say that GM’s Haga easily did the majority of the design work on the car (he was also principal designer on the ’67 Camaro…imagine round lights at the ends of the grille below and you see a similarity to the shape of 67-70 Camaro grille).  The Firebird side marker lights actually look good on it.

Here’s Haga’s Senator and Monza, which is what is under the Bitter SC’s skin.  This Senator was supposedly not equal to a BMW on the road but surprisingly close and an underrated car: 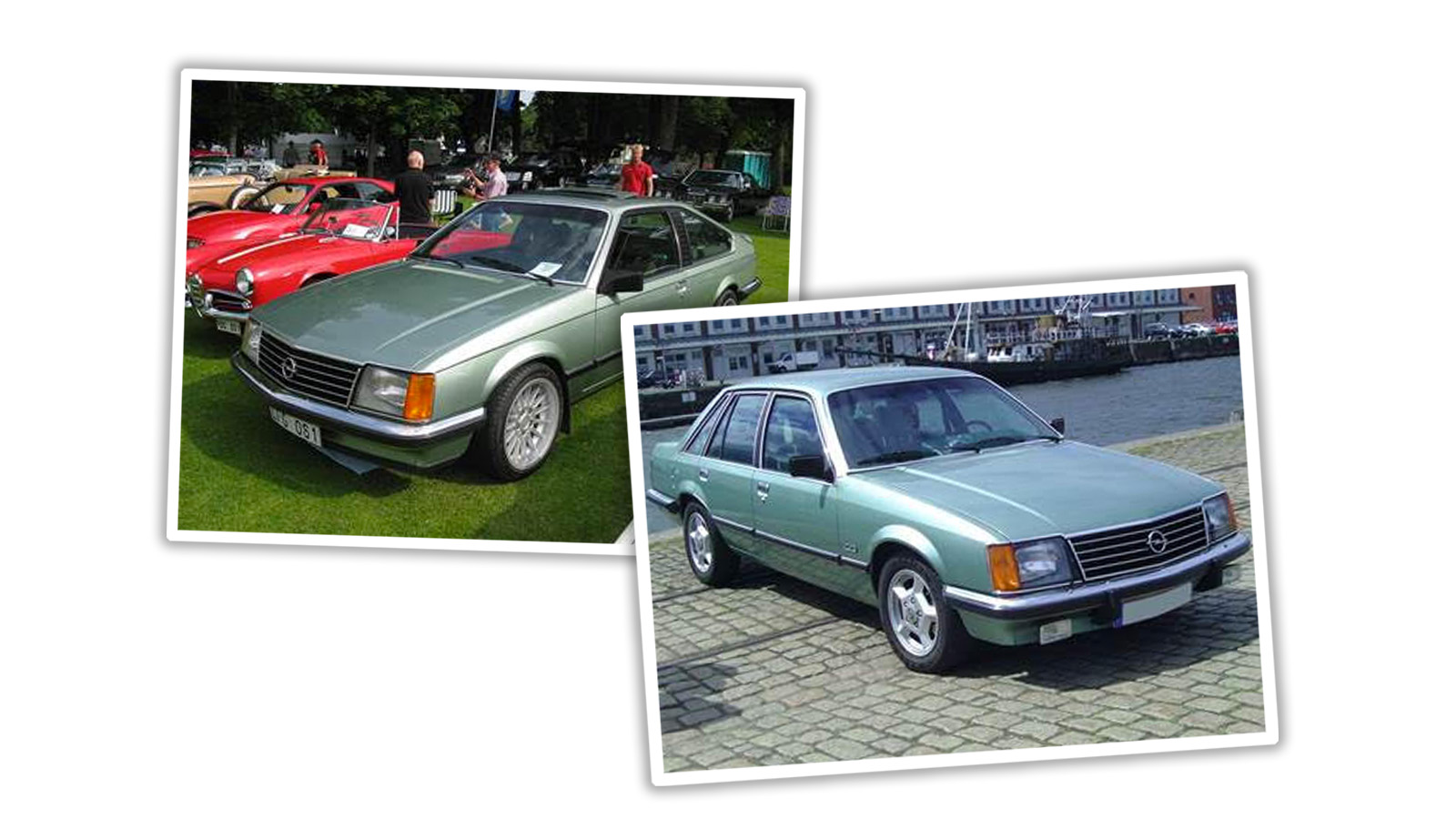 So now we have ANOTHER cool design by GM that it didn’t produce itself!

Erich Bitter (who had almost no success selling the SC in America) licenses the design to GM (even though it likely really designed it) so it can use it for a competitive Cimarron-type 4 door car (as long as it only built 4 doors. Bitter would still exclusively make the coupes).  Hell, Cadillac could have even have had a by BITTER badge on the car and slip Erich a few more bucks.

Here’s what it would be – see the Photoshop below.  I basically just put the SC front clip and tail onto the Opel Senator’s unchanged four door greenhouse and body center section (I just added new door skins), and the thing holds together pretty well.  Let’s call it… I dunno… a Cadillac Cantata? 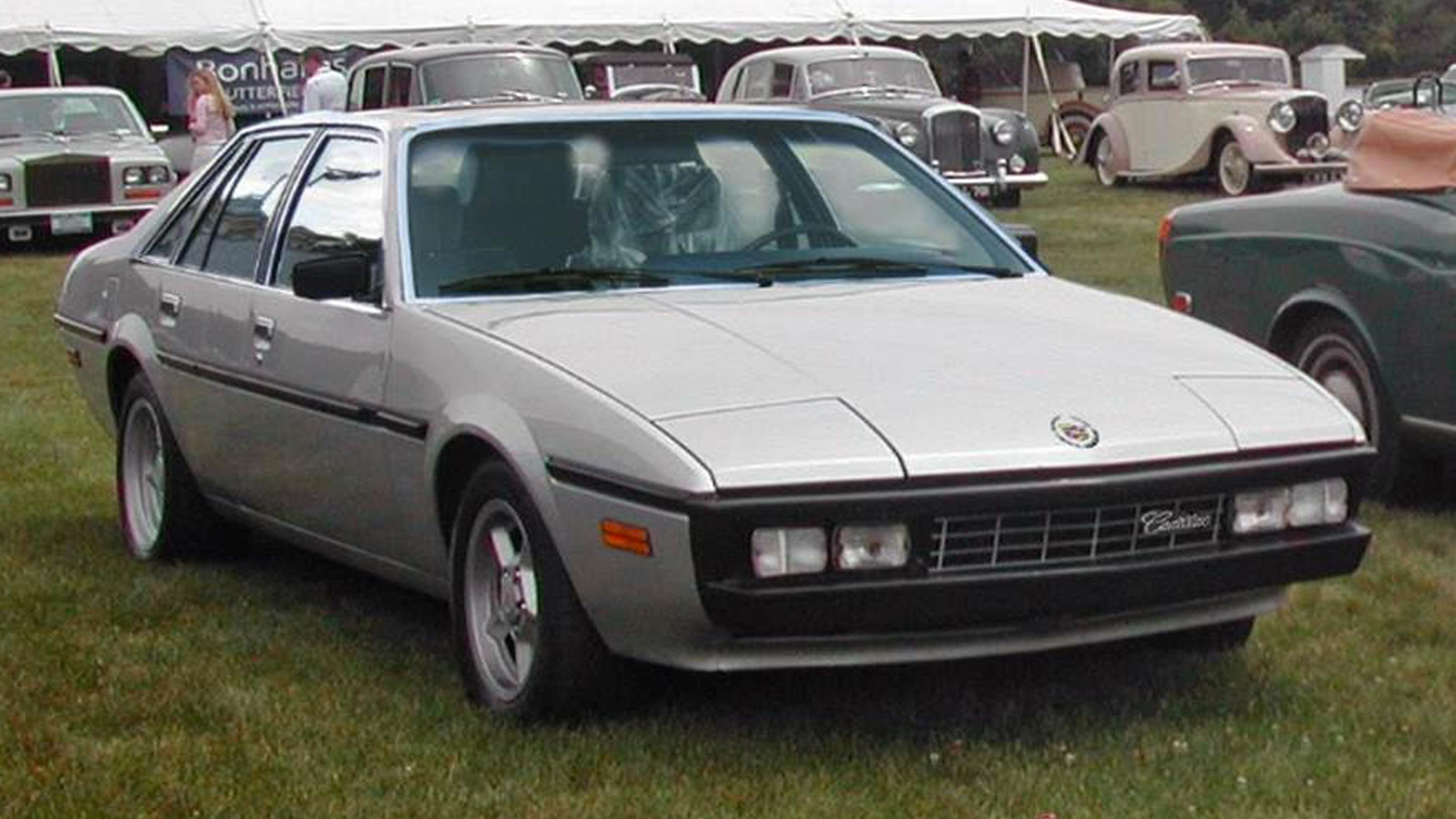 Oh, and DON’T say that this wouldn’t sell because “the Catera was an Opel Omega (Senator replacement) and that was a flop.” By the time of the Catera’s launch, there were FAR more choices in the market than there were in the Lexus/Acura/Infiniti-free early 80s.

Don’t believe me?  Below I’ve shown the concurrent 1982 German rivals that a “Cadillac Cantata” owner would park next to at Bushwood Country Club. There’s a Bimmer with a lame “eta” engine, a car with standard vinyl seats (sorry…”MB Tex”) that idled like a cement mixer full of rocks, and a big VW Passat. Hardly insurmountable competition.

The inside would just be the upgraded Senator interior, and advertising would capitalize on this being an actual German-built car that is made to fit American needs and tastes…even if it’s just a rebodied, bored-out Opel: 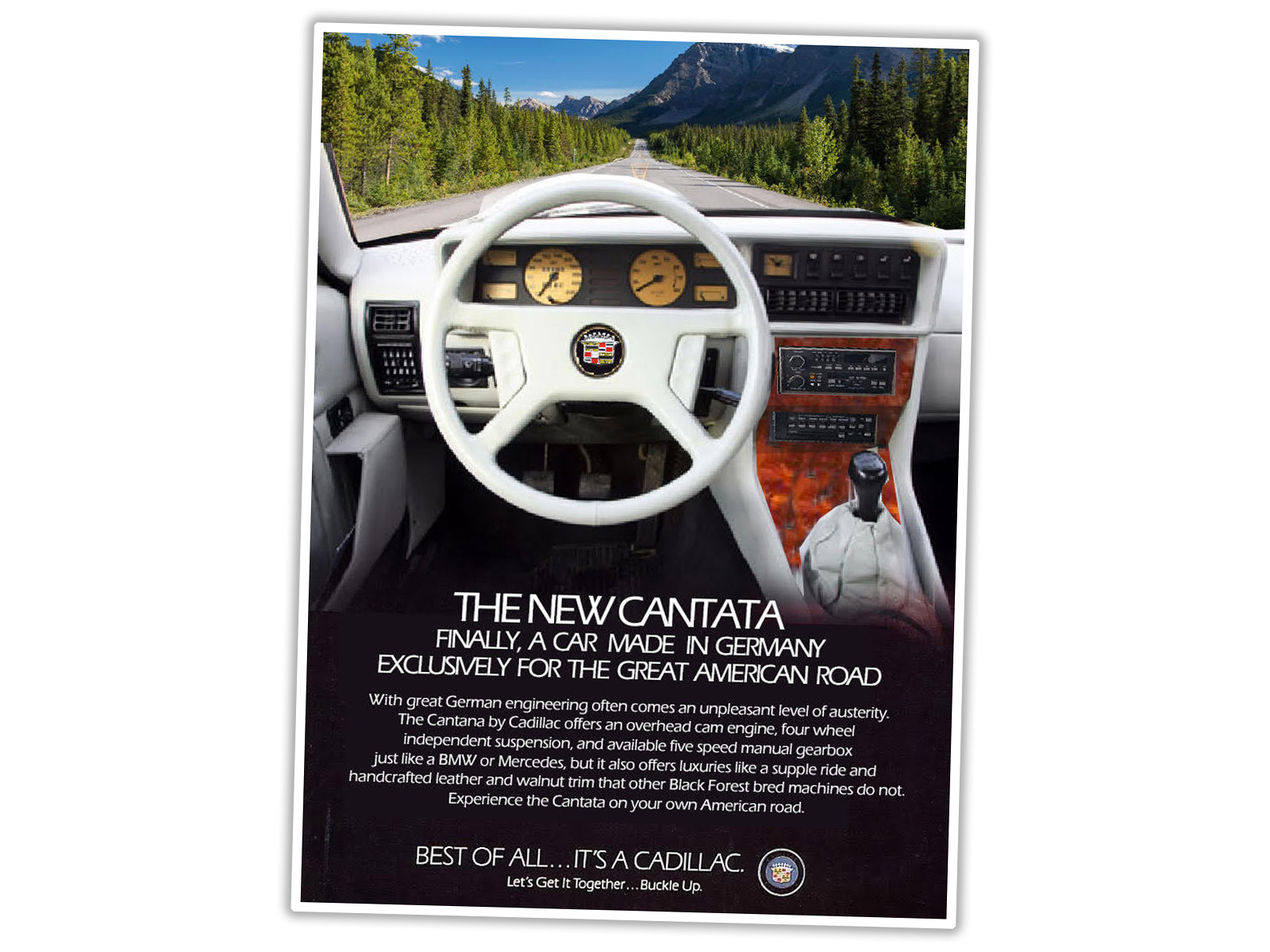 Here’s the back view. Obviously for the Cadillac Cantata I took out the Bitter’s Lancia Scorpion/Monte Carlo taillights: 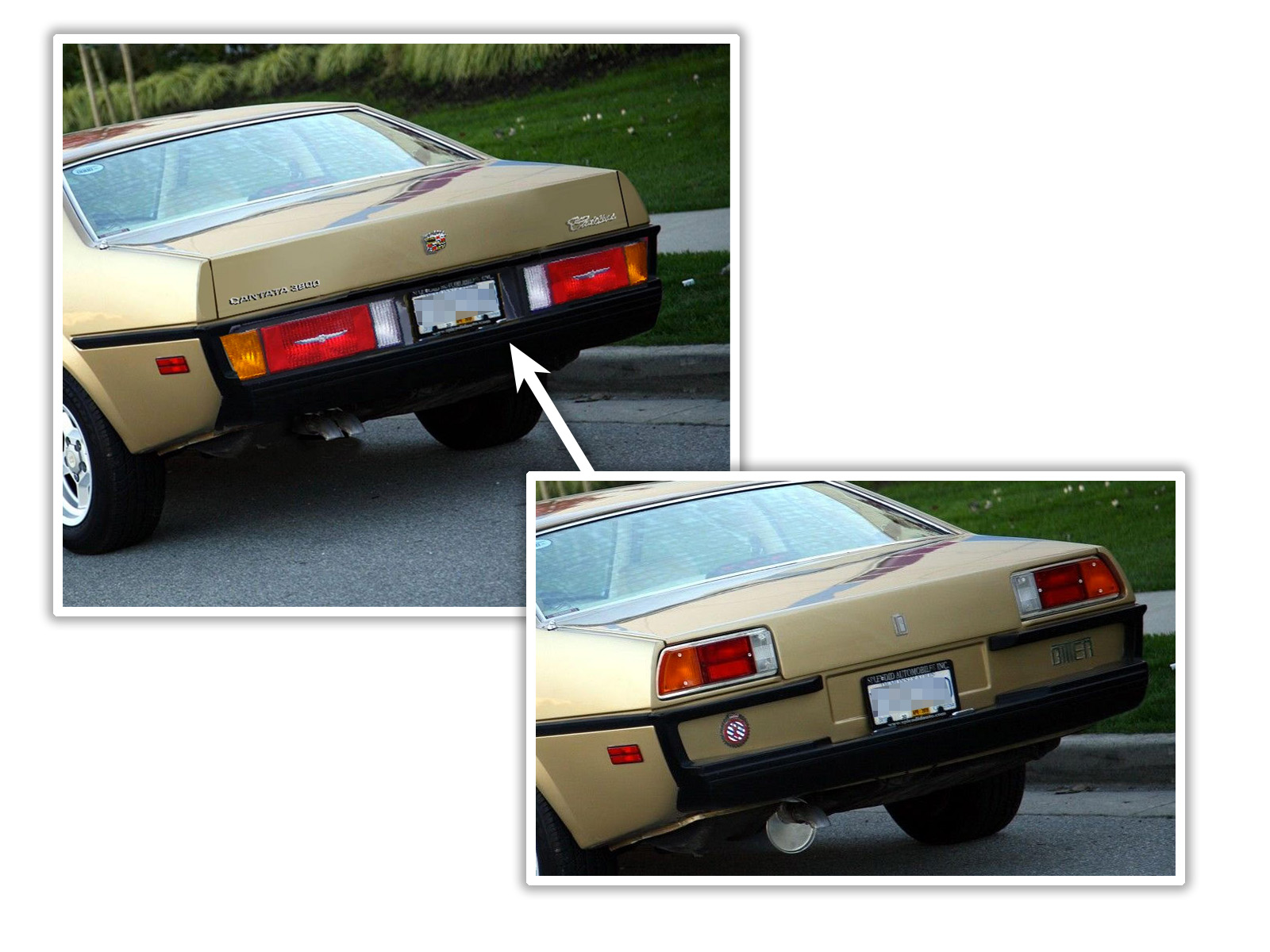 [Editor’s Note: I think The Bishop’s re-location of the taillights and using flipped our-world Cimmaron lights is a vast improvement. – JT]

Do I believe that this West German-built thing (now mass produced to a competitive price point) have been a viable competitor?  I say it would have totally held its own, and if you’re my age and were a car geek back then, you would have been proud to have your mom drive you in this thing to play Galaga at Pizza Hut.

Would this have given Caddy the yuppie credibility it so desperately wanted and needed? Compared to the CIMARRON??  Are you kidding?  I think slimy Cadillac dealers would be gouging them with Honda-like markups and they’d STILL sell.

Read All My Posts »
PrevPreviousCalifornia Threatens To Suspend New Tesla Sales Over Misleading Autopilot Claims
NextToyota Hoped The bZ4X EV Would Usher The Brand Into The Electric Era. Then The Wheels Fell OffNext