At Lane Motor Museum, where I work as the education director, we have a few cars in the collection that are here under the Show and Display clause. I thought I’d start a series highlighting these cars that us ‘Muricans don’t get to enjoy on this side of the globe. I considered naming this series Barely Legal, but I thought that might be problematic for everyone’s algorithms.

The Show and Display clause is an exemption under the US Federal Motor Vehicle Safety Standards’ Imported Vehicle Safety Compliance Act, otherwise known as the 25-Year Import Rule. That rule simply states that a car that was never sold new in the US cannot be imported into the country until it is at least 25 years old. The official reasons are varied, but it mostly has to do with a specific vehicle not meeting specific US crash tests or emissions requirements. Once the car turns 25 year sold, however, it can be legally imported.

For a non-profit car museum with a stated educational mission, Show and Display means we can bring in a newer-than 25-year old foreign automobile (after a lengthy paperwork and legal process) in order to , you know, show and display the vehicle to the public.

For you, dear reader, I will now Show and Display the museum’s 2007 Renault Sport Mégane F1 Team R26. 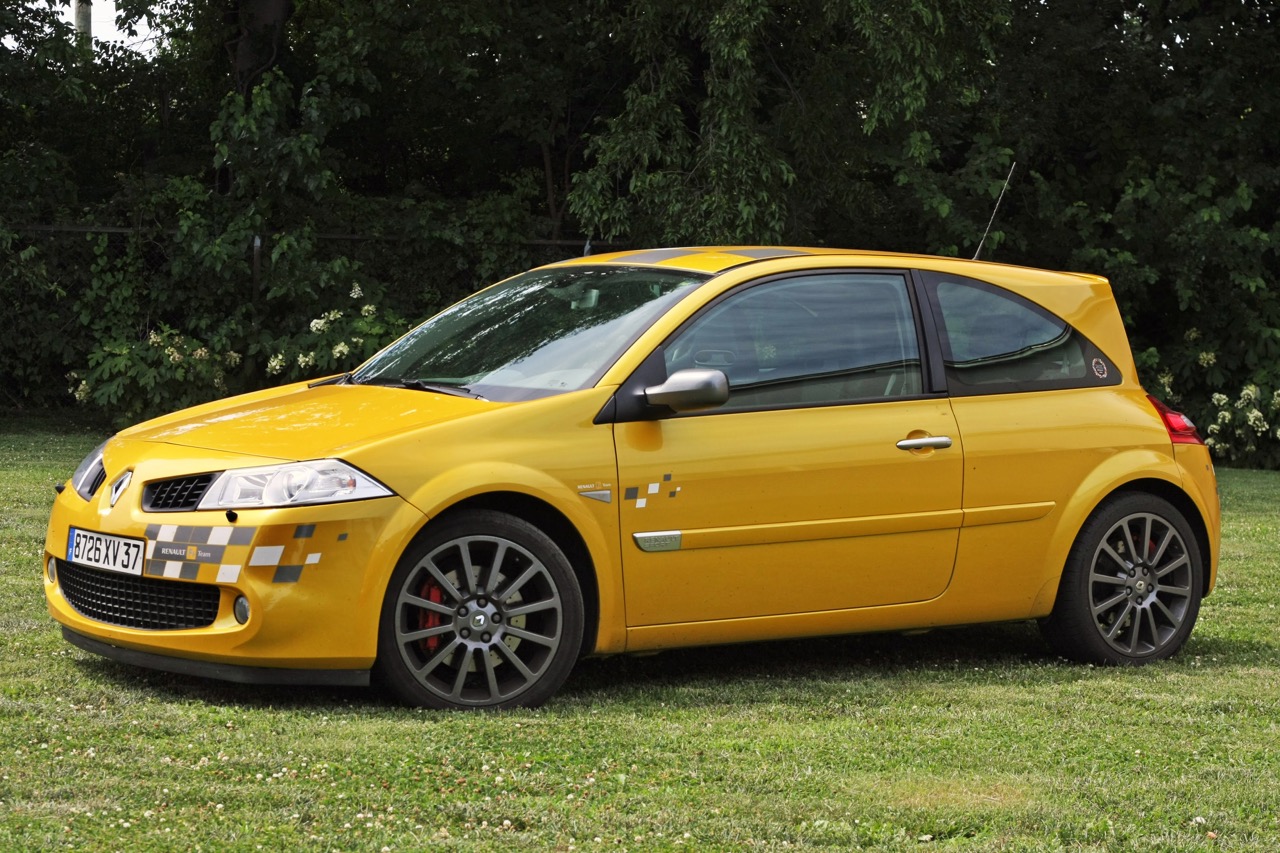 The Megane debuted in 1996 as a replacement for Renault’s R19, competing with the likes of the Volkswagen Golf and the Ford Escort. Our car is a second generation Renault Sport Mégane, with the F1 Team designation commemorates Renault’s 2005 and 2006 Constructors’ and Drivers’ Championship titles in Formula 1 those years. 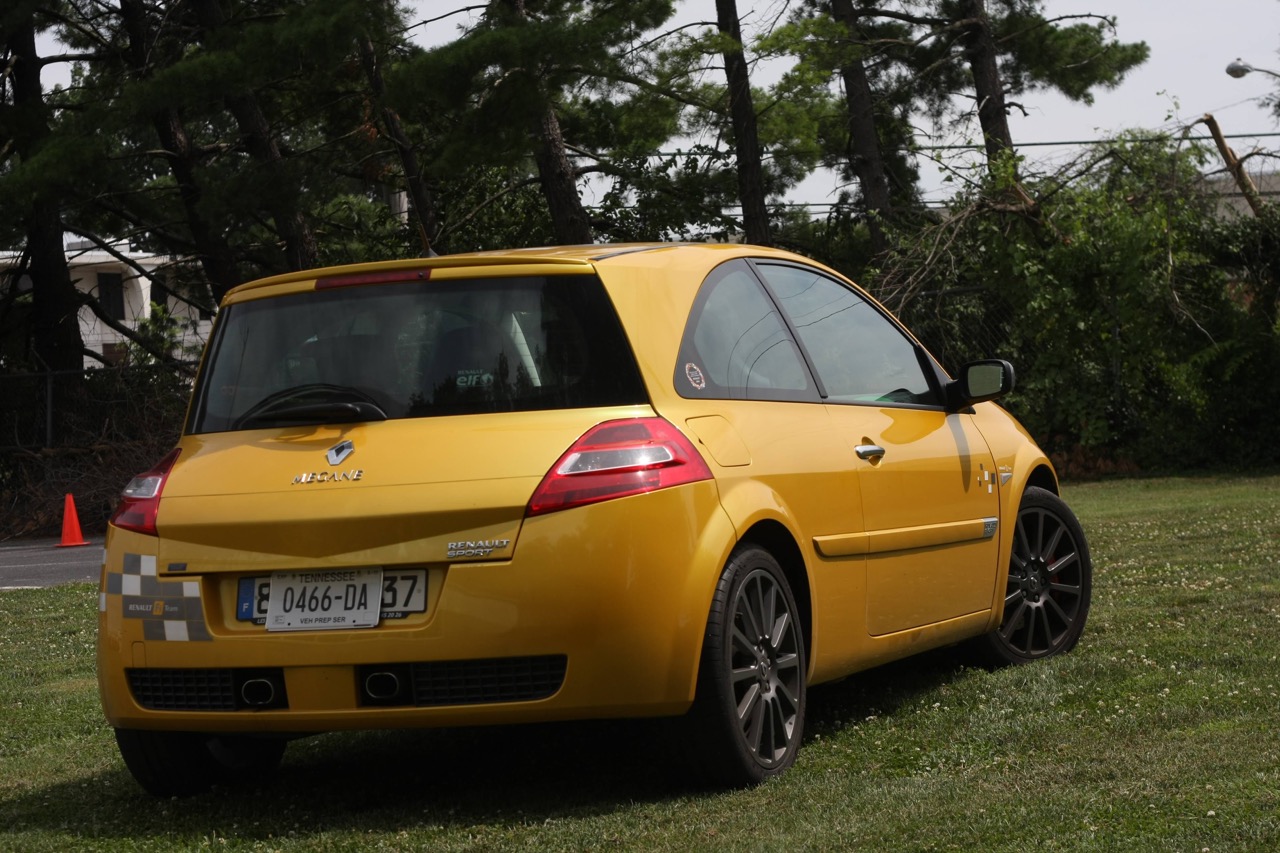 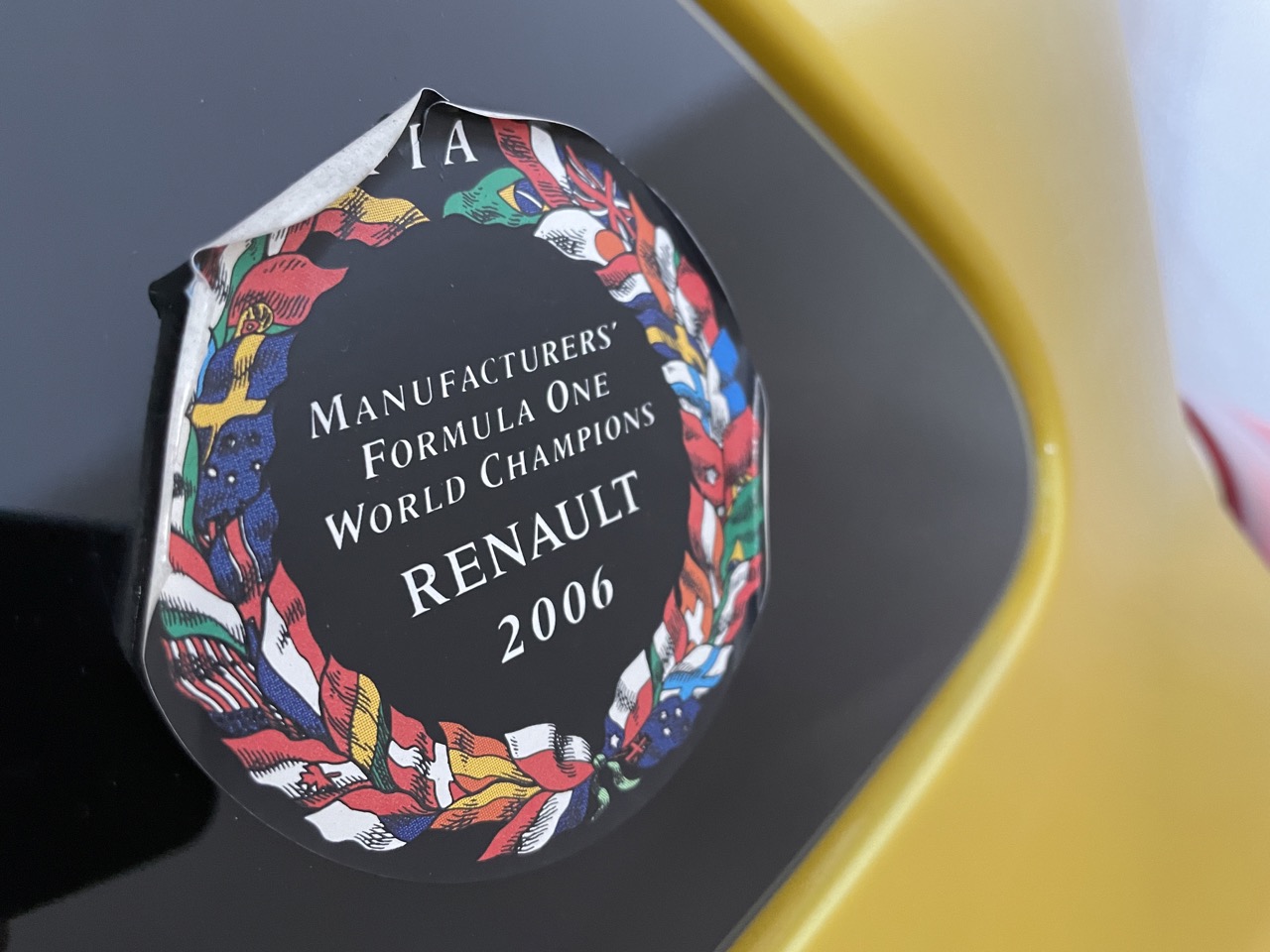 This will be a basically a walk-around and interior tour. I haven’t spent much time in the driver’s seat since 2017, but needless to say, it’s quite a bit of kit. A 2.0 liter, 227 hp turbo four powers the front wheels, and is paired with a 6-speed manual, along with the requisite hot hatch add-ons like stiffened steering, 18-inch anthracite alloy wheels, Brembos all around, and sport-tuned exhaust. 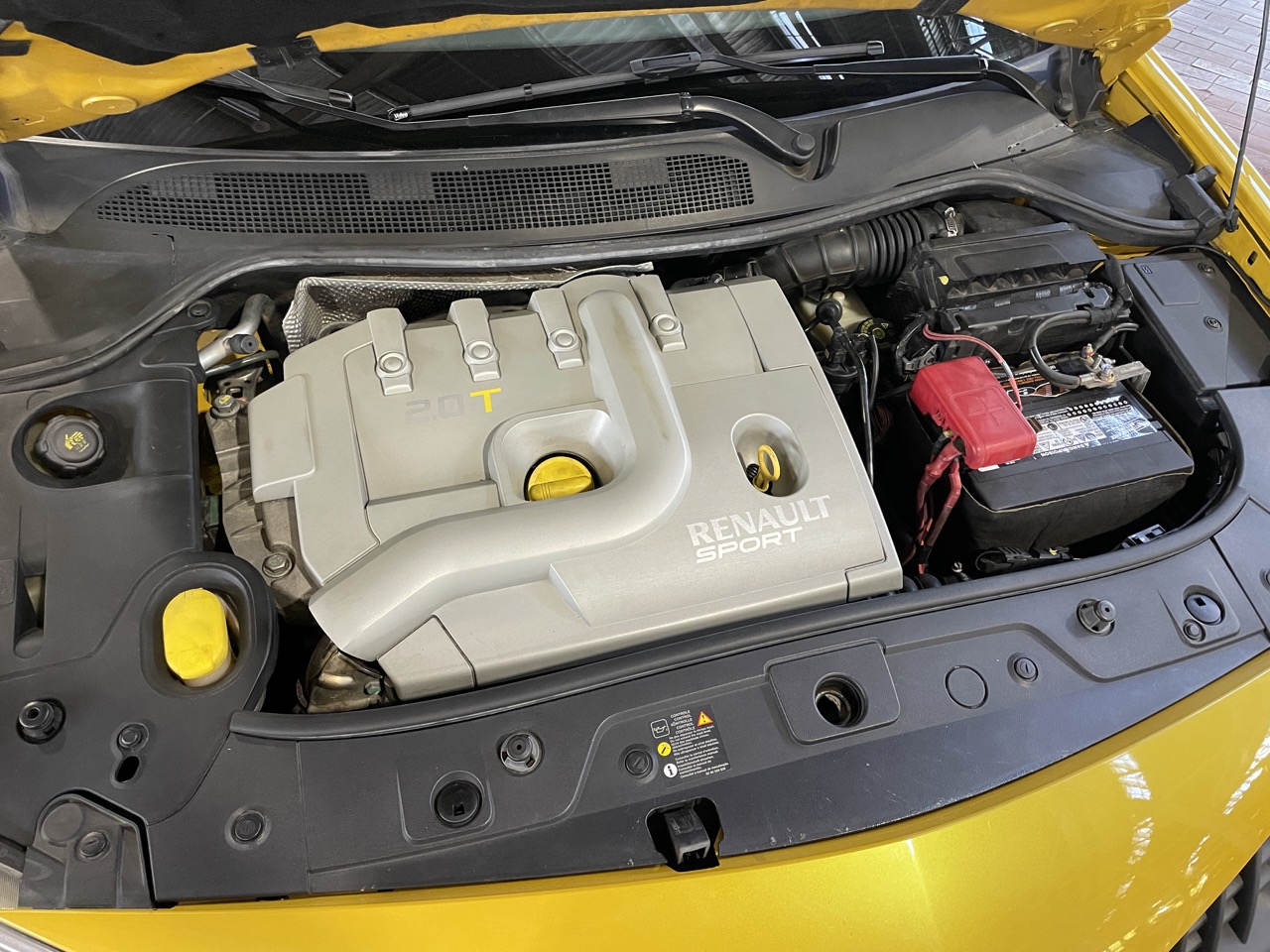 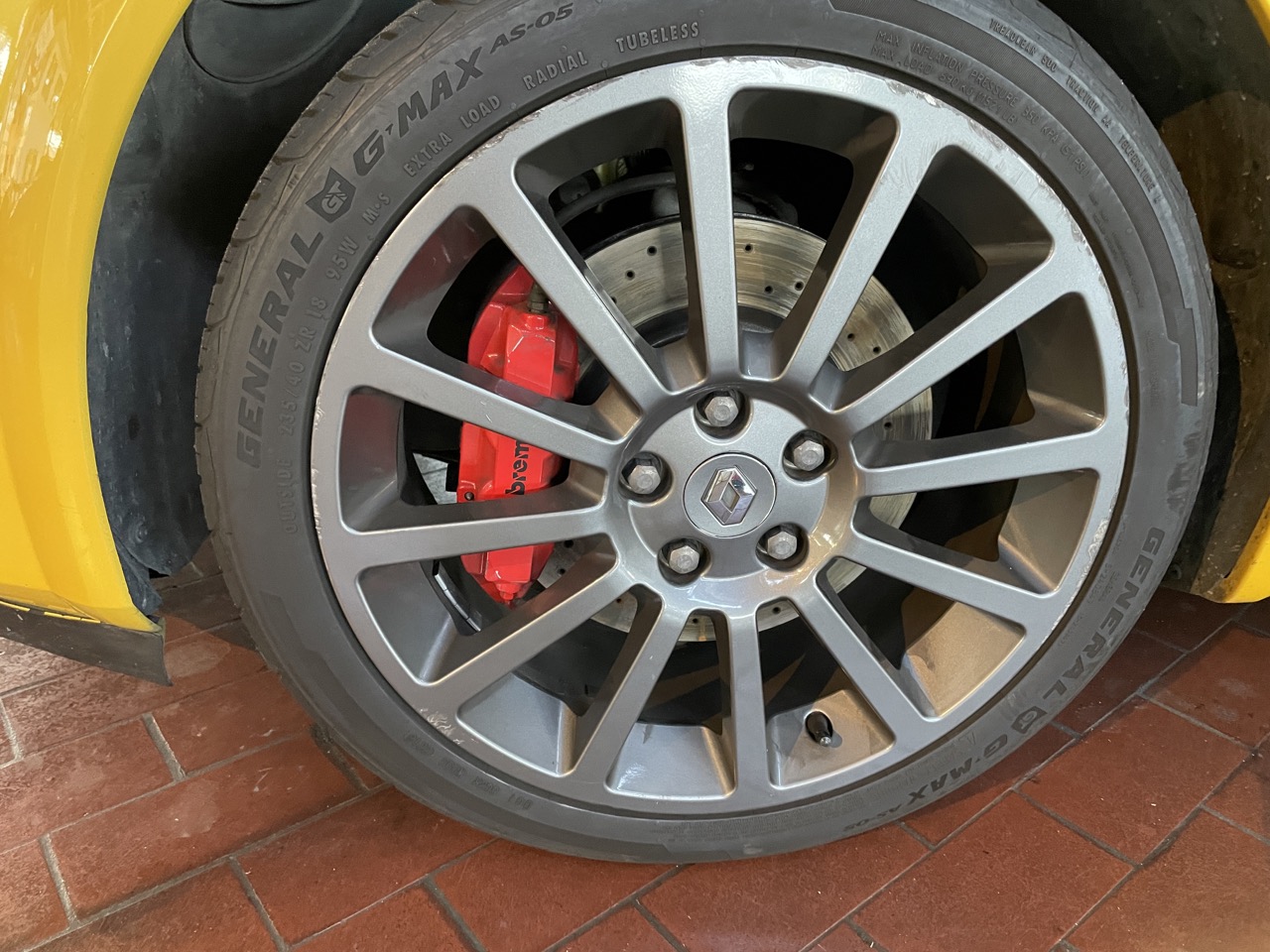 I’ll start inside the wide doors, where this little cubby resides in between the door and under the floormat. Torch may correct me, but I cannot think of any other modern car with this type of cubby storage area in the footwell of the front seats. [Editor’s Note: Yeah, I think Rex is right about that; this is a weird one! – JT] The driver’s side has one too. It’s not very deep, but it is one more storage area, along with the flip-up armrest lids that are common on many French cars. 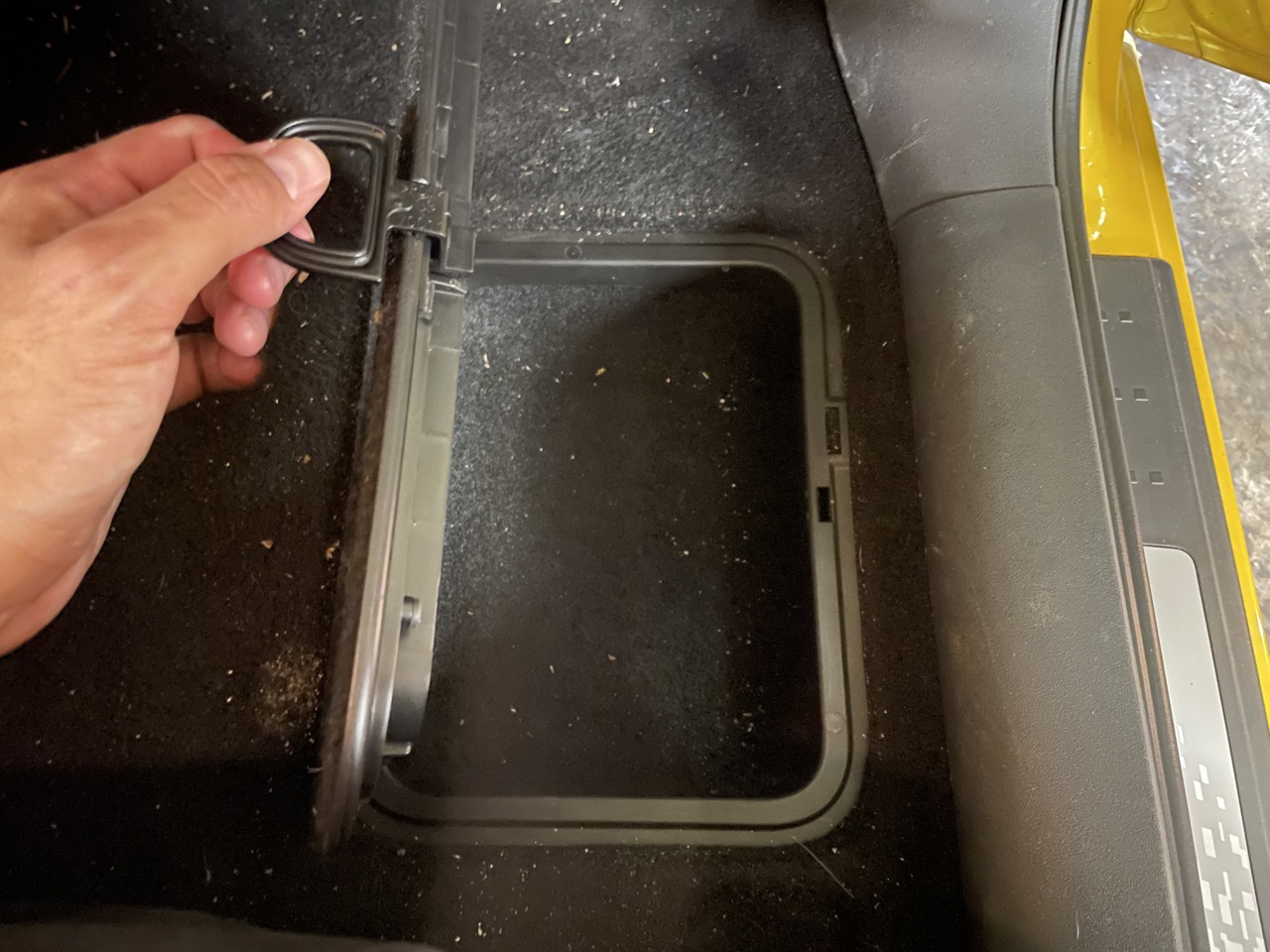 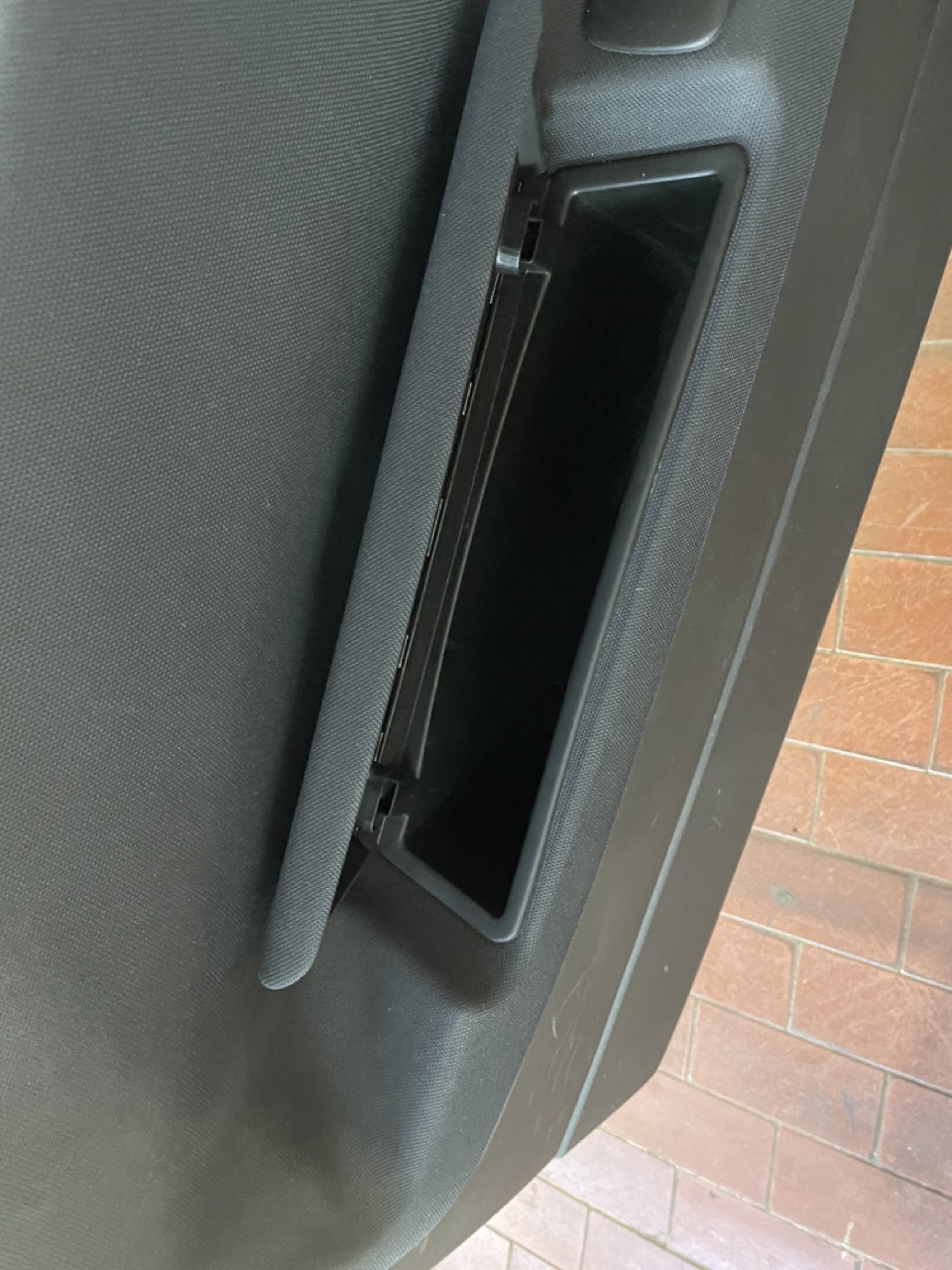 Let’s move on the arguably the coolest part of the center console, the thrust lever-style emergency brake. 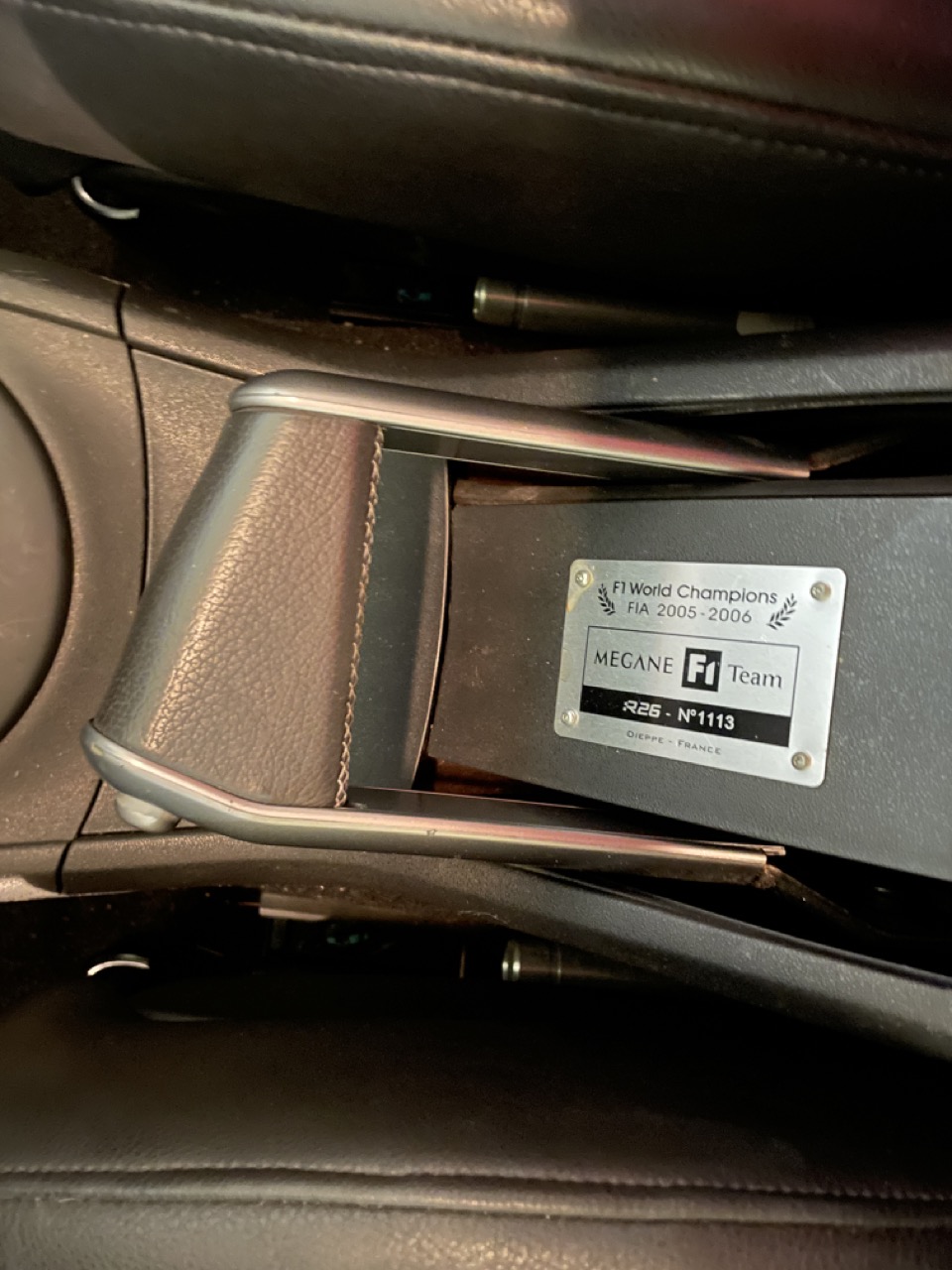 This thing is such a visceral, aesthetically pleasing design I’m not sure why more cars didn’t copy the Mégane’s e-brake. Perhaps there is a design issue I’m not aware of, but is it very satisfying to engage. It also contains a plaque, because you can’t charge more money for a special edition without a numbered plaque. 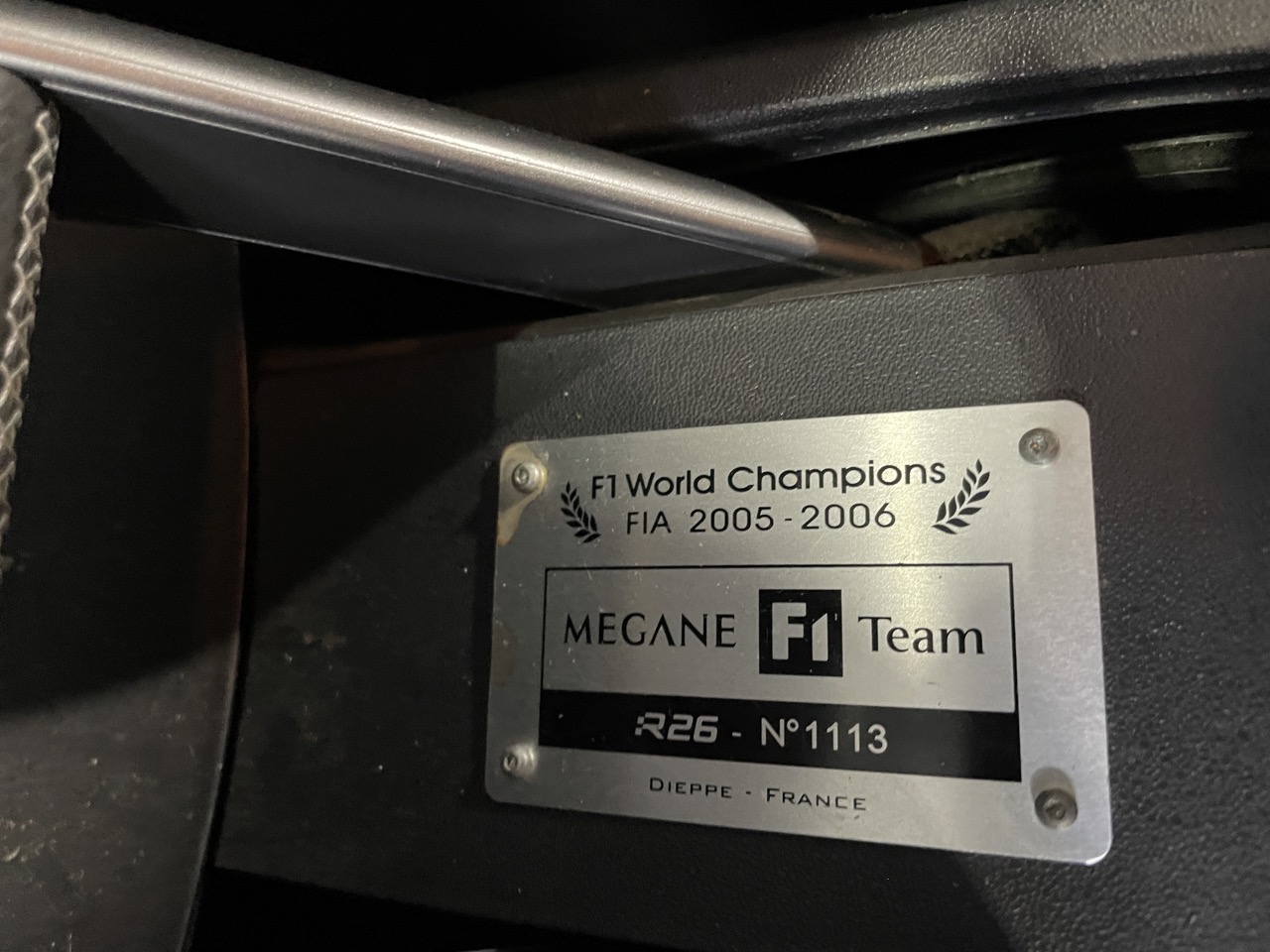 As we move up the console, you’ll find the 6-speed stick, with Renault’s ring-style reverse lock-out. Again we see some interesting “cup-holders.” They look to me like a pair of ski goggles, but way less useful. 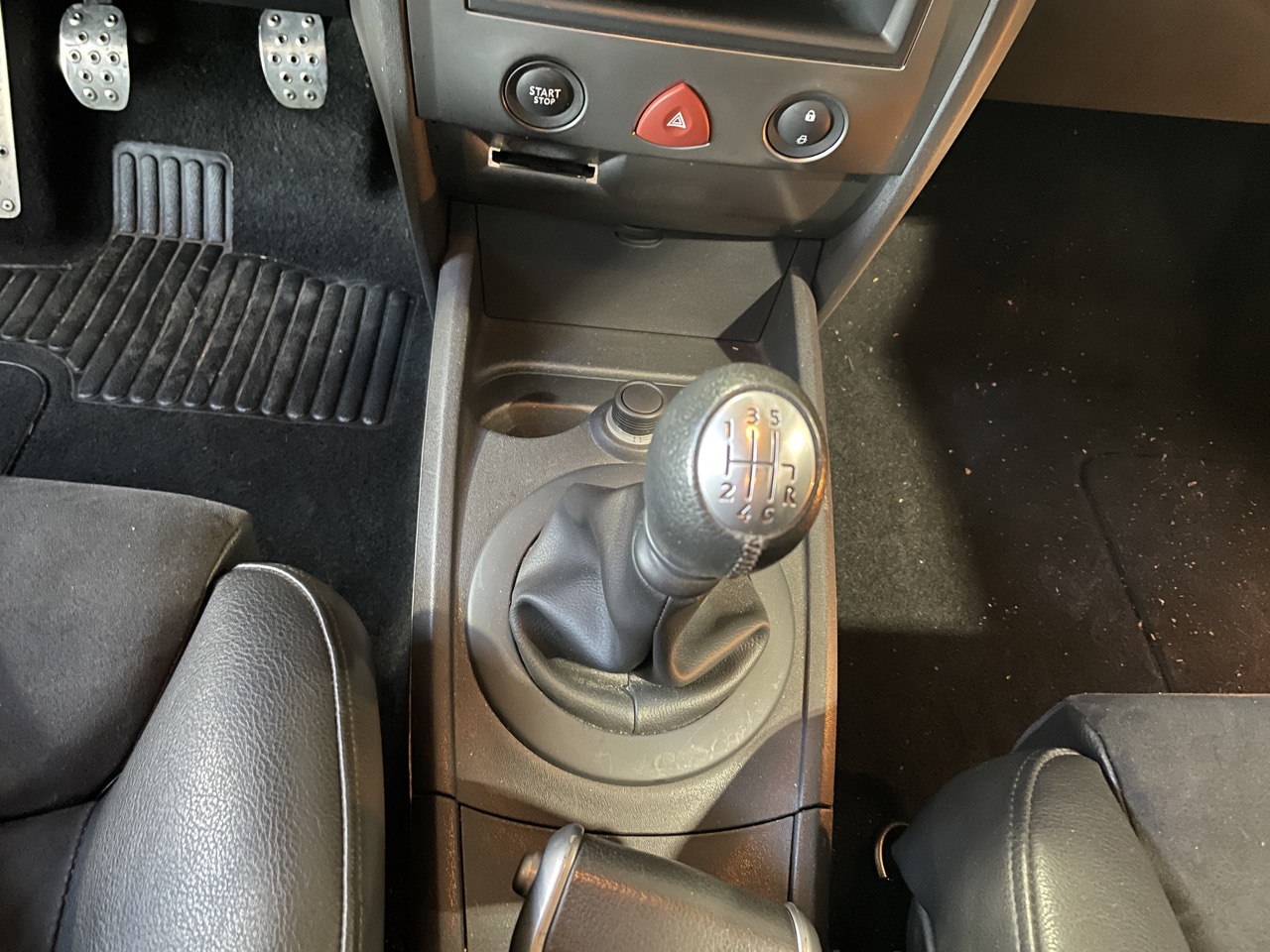 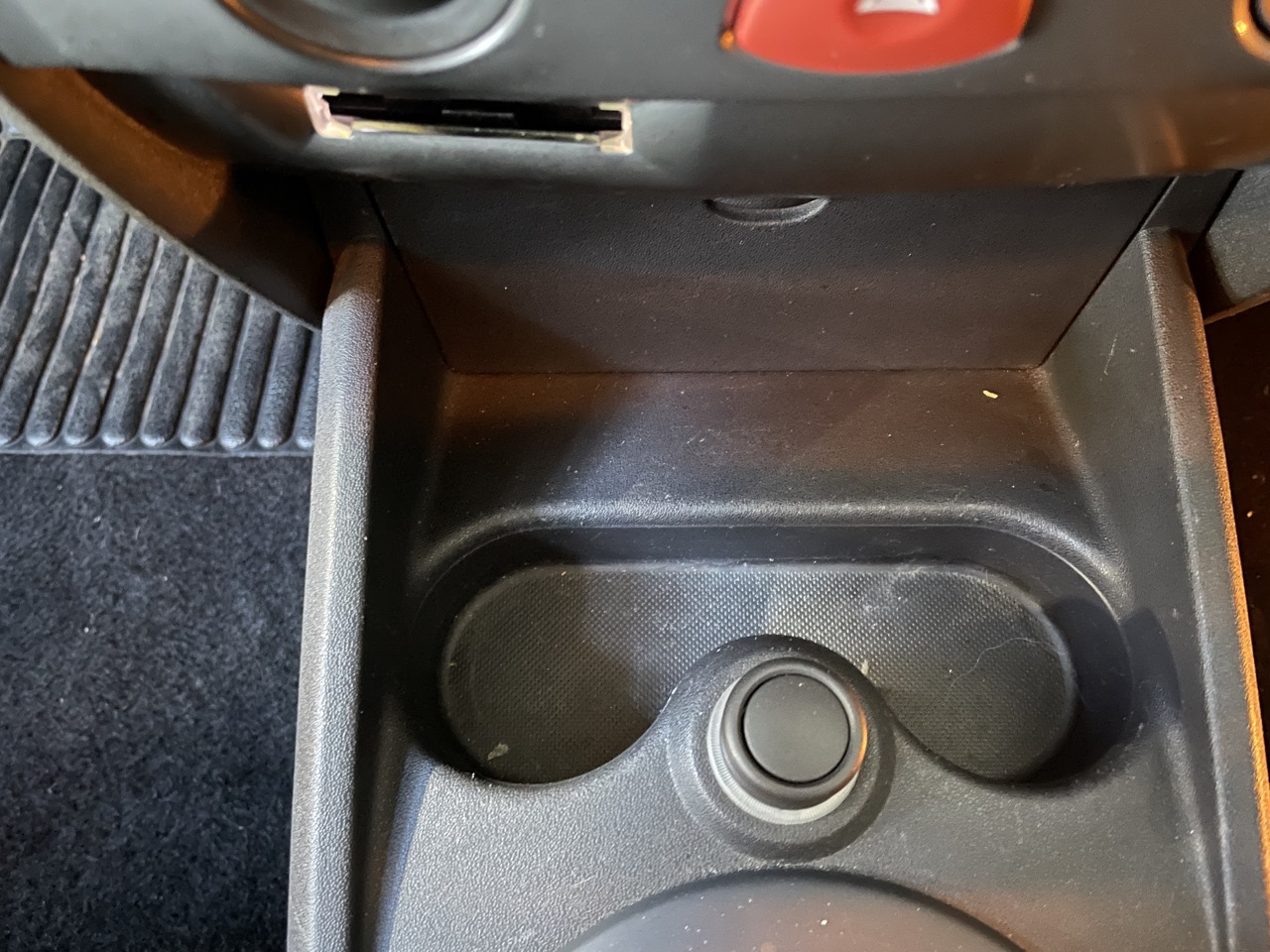 Renault debuted its key card entry system in 2001 with the introduction of Mégane’s second generation. This version still required you to push the button to unlock the doors, and you have to insert the card in a slot on the dash, but the key card eventually led to the proximity key, using the same flat design. The lock and unlock pictograms on ours are barely visible, as you can see, but it does save space in your pockets. 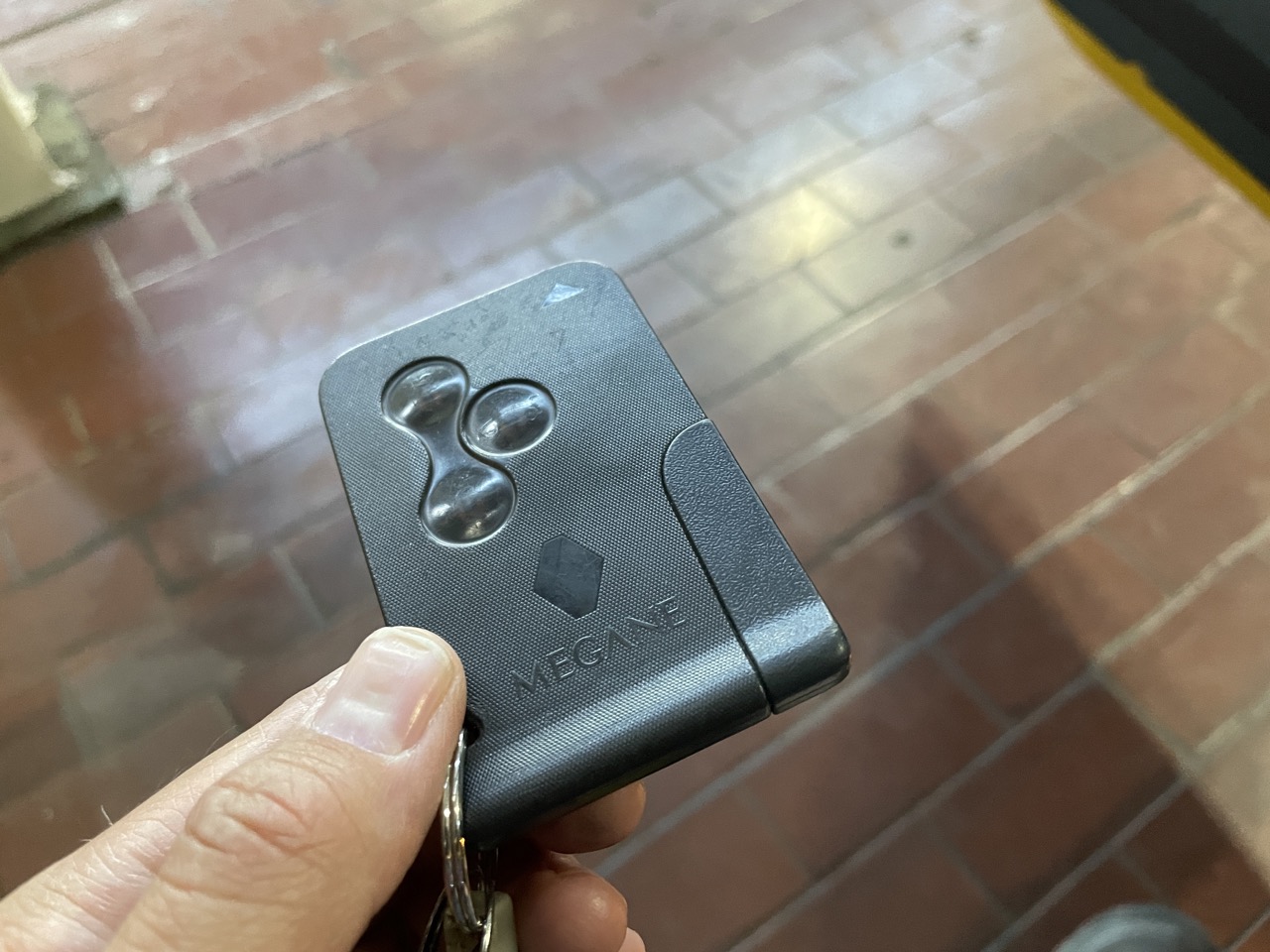 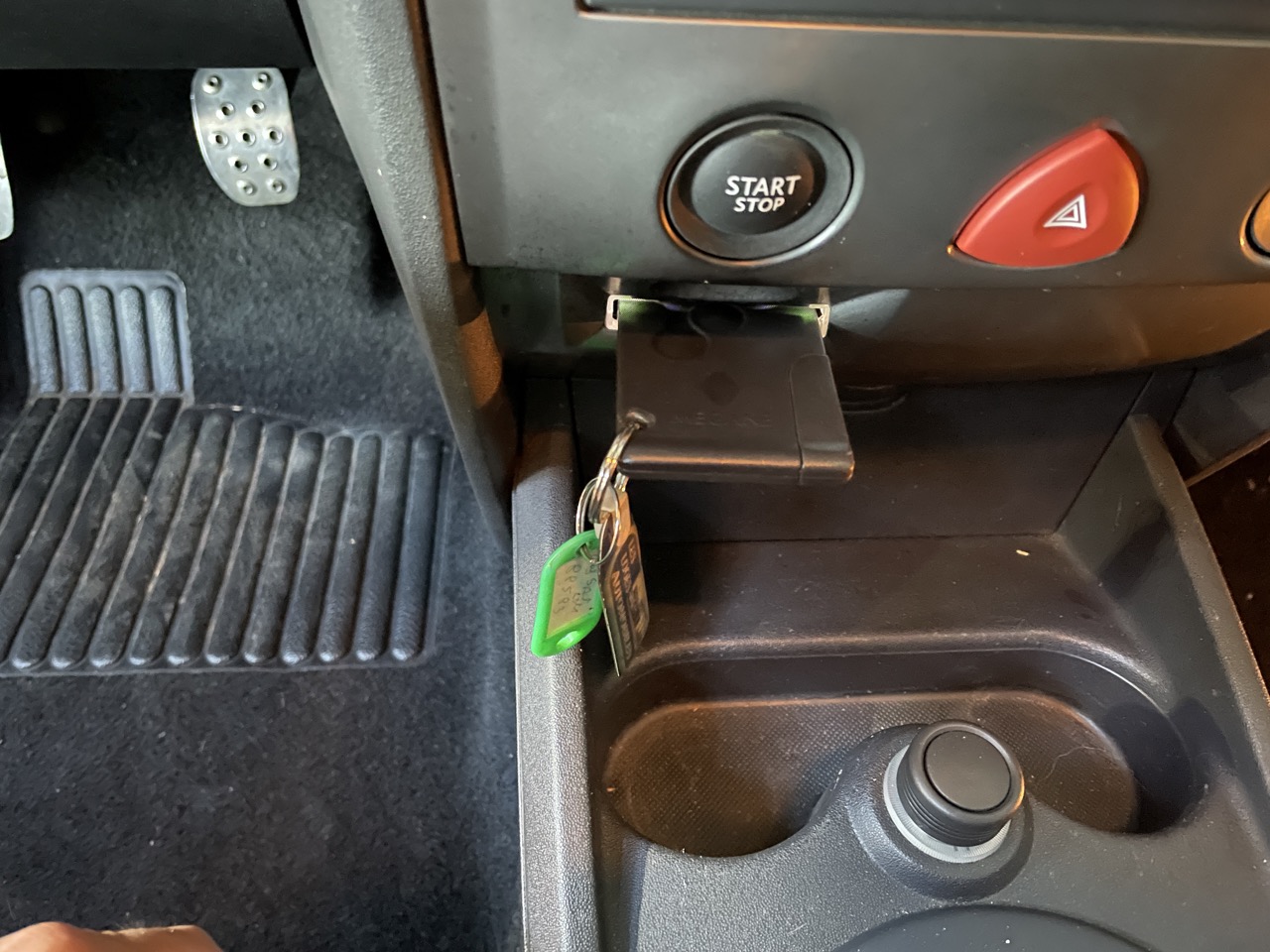 [Editor’s Note: Wow, that’s a weird setup! I’ve not seen this up close before! – JT]

A look at the comfortable, suede-insert Recaros, and the habitable-by-adults backseat. 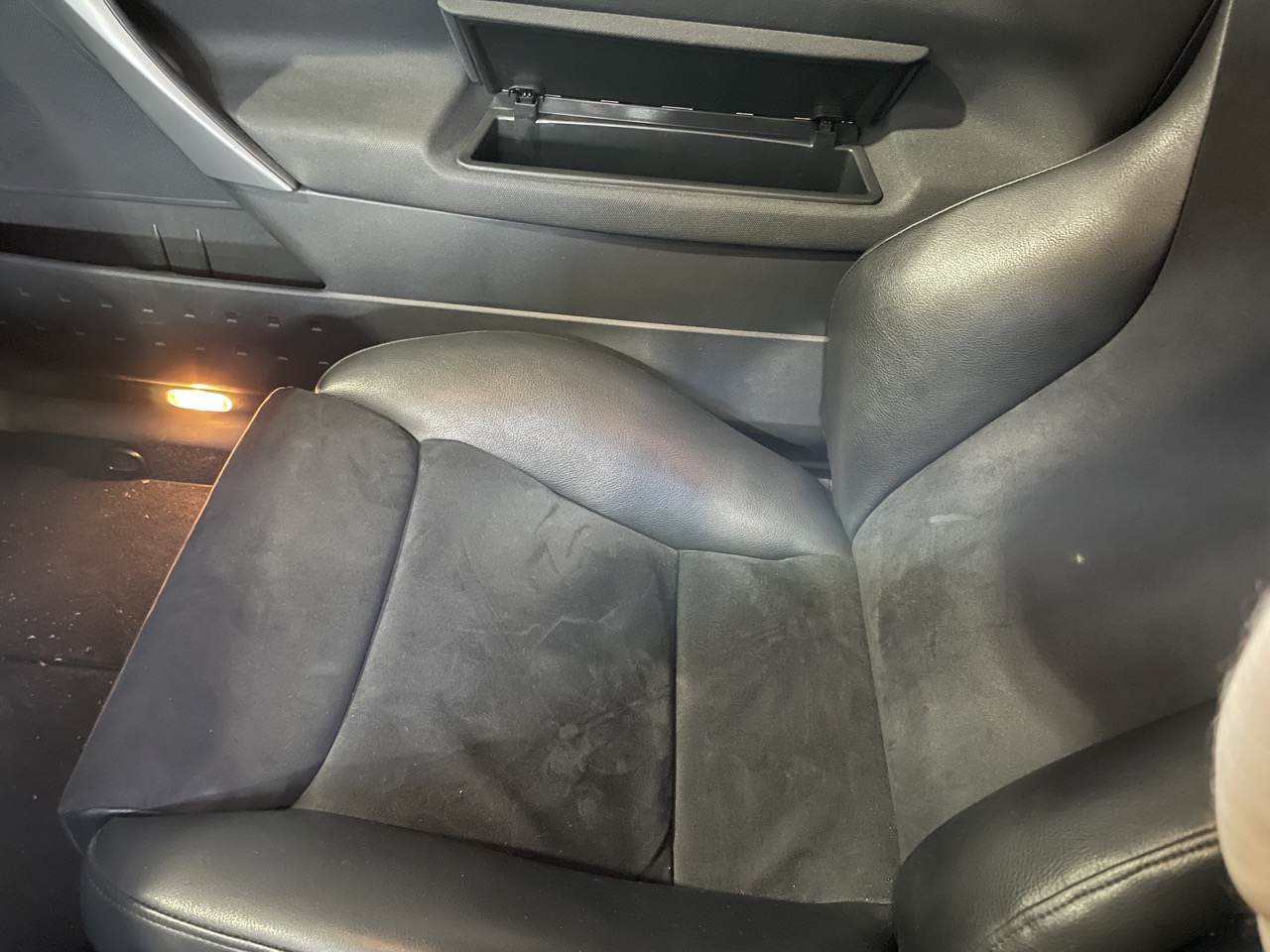 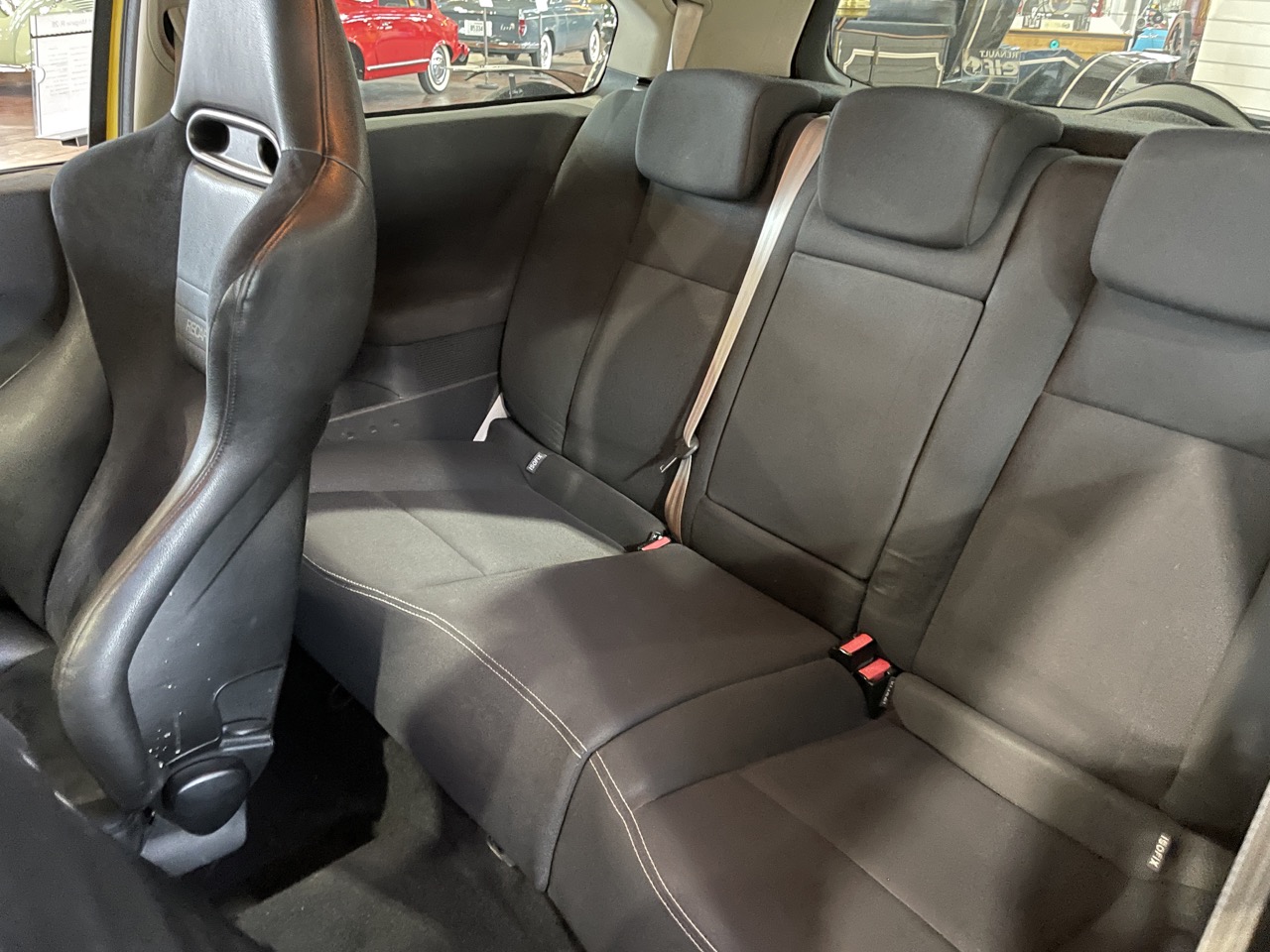 Another interior quirk: I can’t tell if its clever or not to replace one of the passenger grab handles with a sunglasses case, as it seems it’s at a weird angle to grab your shades. I know BMW does this for some models, but I don’t know of too many companies that use this method of Pit Viper storage. 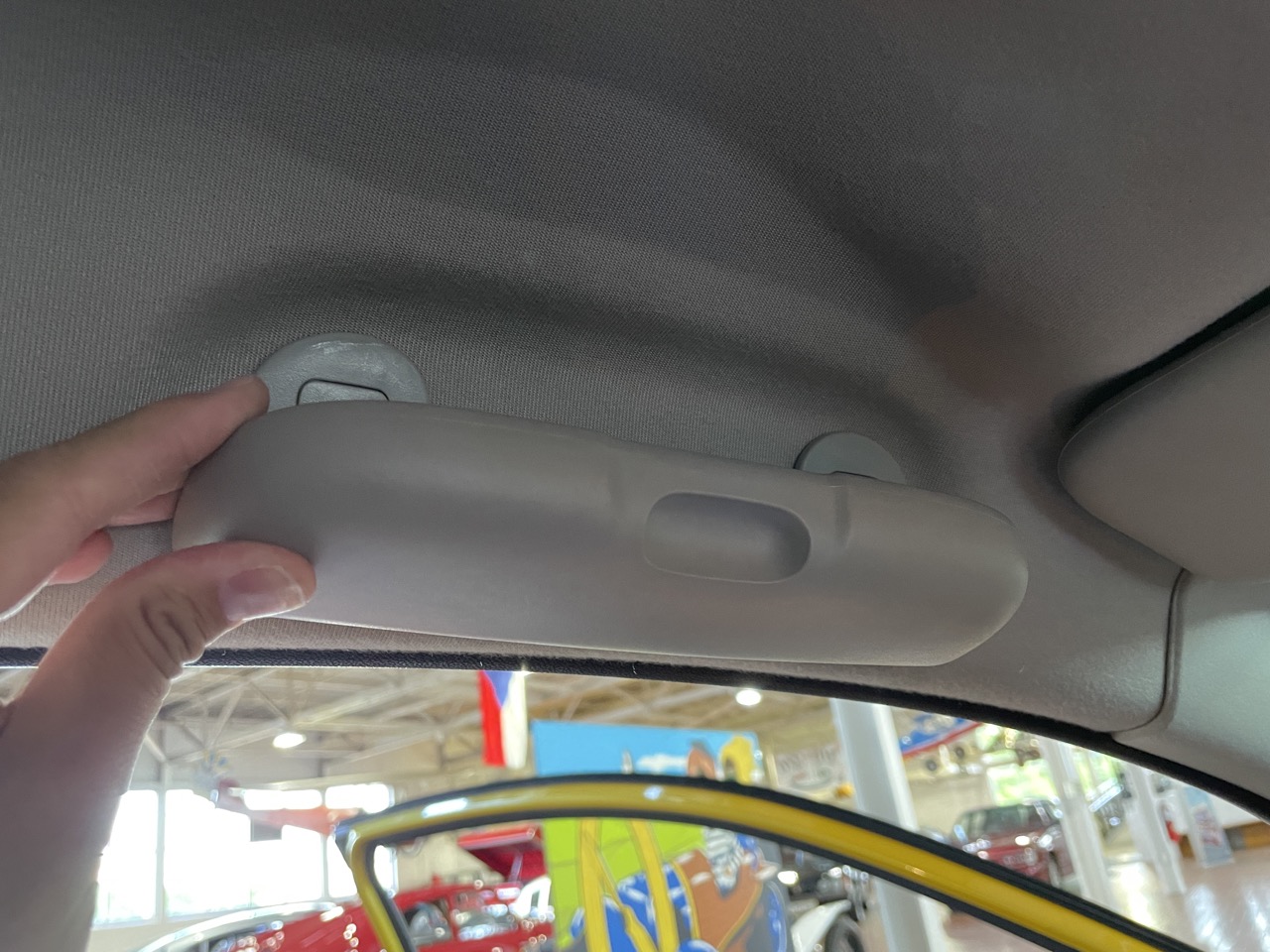 A nice chonky steering wheel, along with the climate controls in Celsius, and the gauge cluster (in Françias). 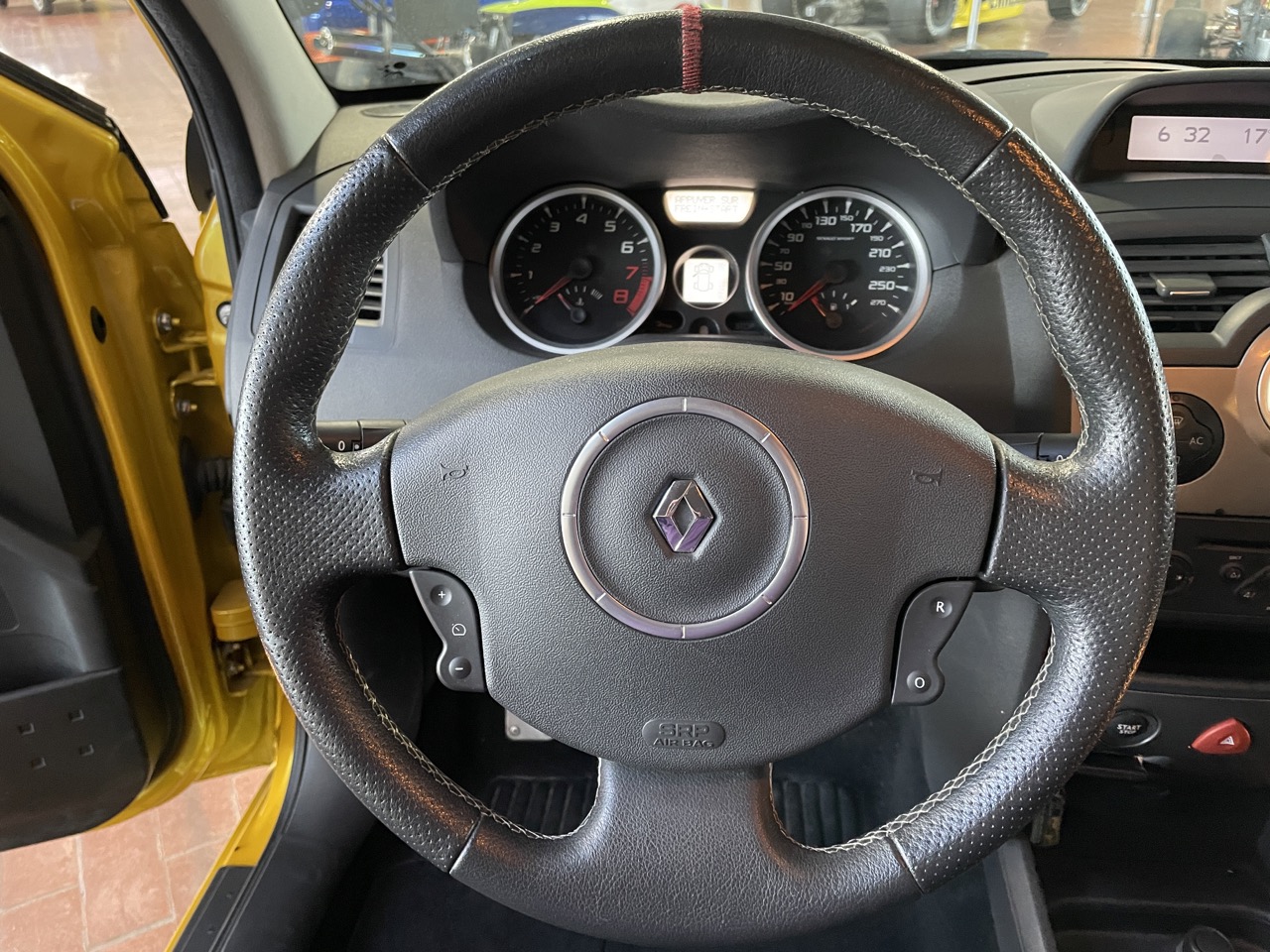 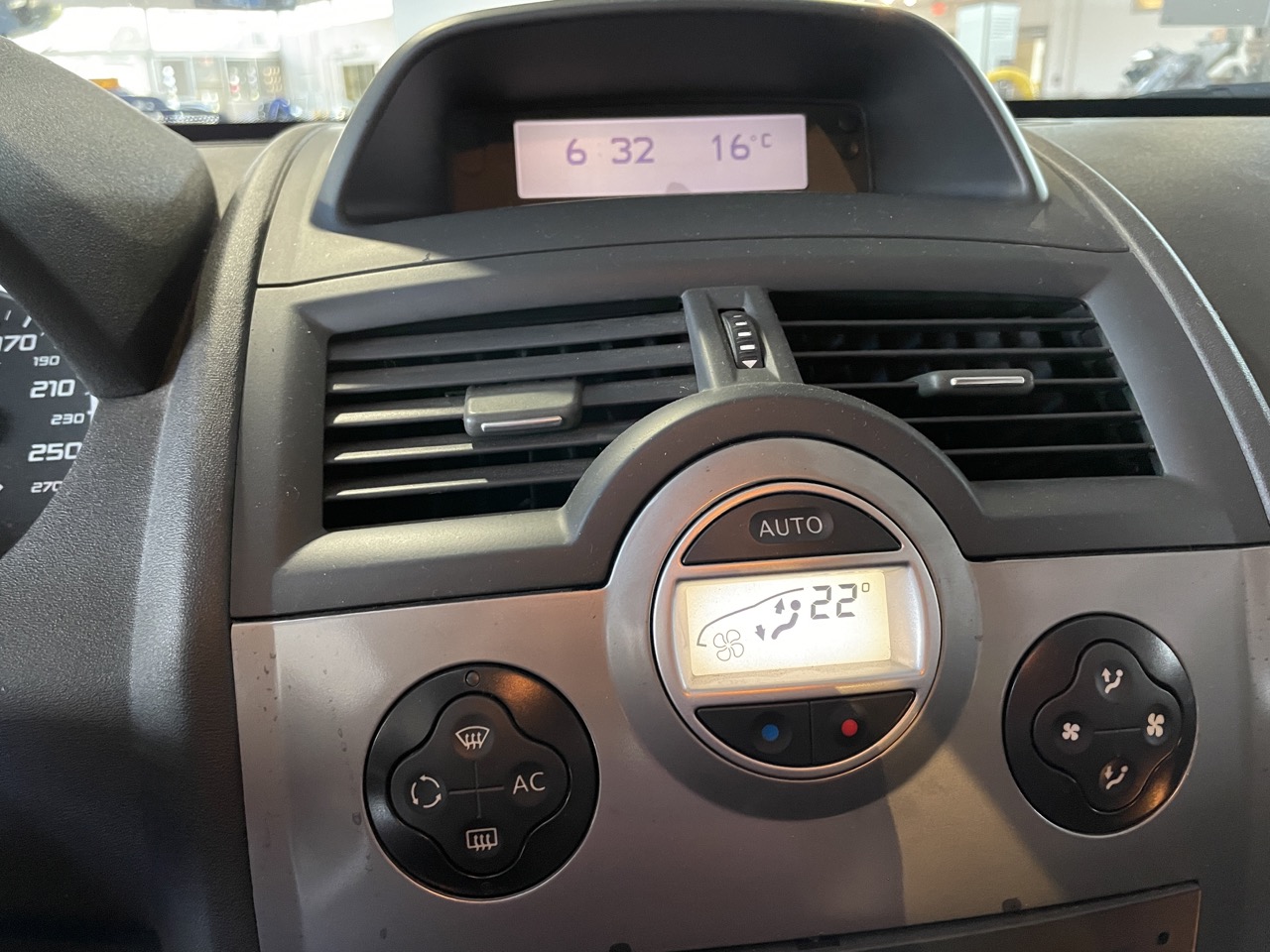 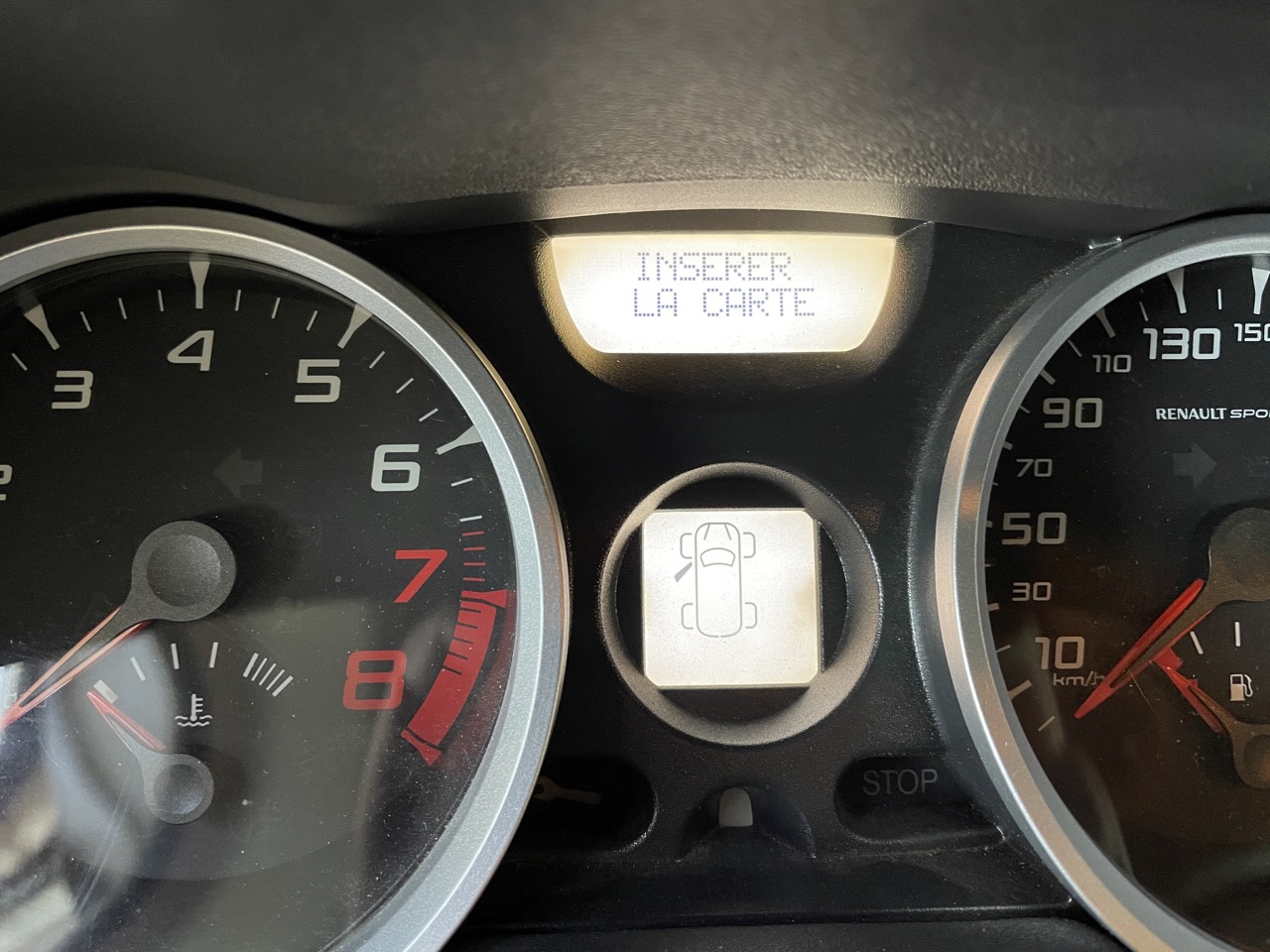 [Editor’s Note: That center screen there with the overhead view of the car is interesting, because instead of using a dot-matrix screen like the text screen above, Renault decided to go with a screen made with custom, discrete segments for the parts of the car, a simpler approach that is closer to the old LEDs-behind-a-translucent-panel-with-silkscreened-graphics that would have been used in the previous generation of car. It’s an interesting transition display tech that is effectively extinct today. – JT]

The Mégane is listed officially as a small car, but I think of it as a mid-sizer, mainly due its large Avantime-like derrière. This is a good amount of storage, back seat space, and the doors are rather wide for a hot hatch. 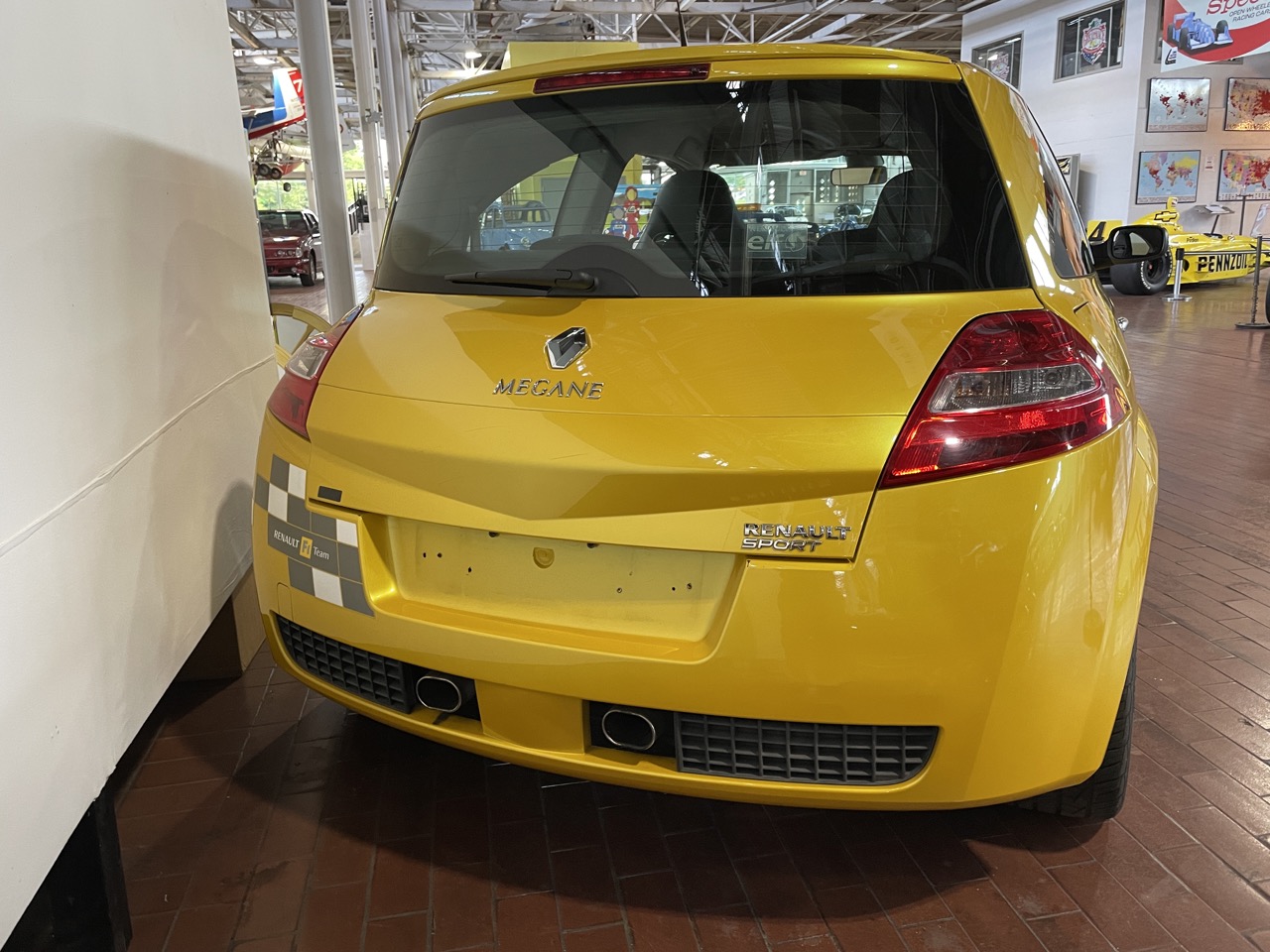 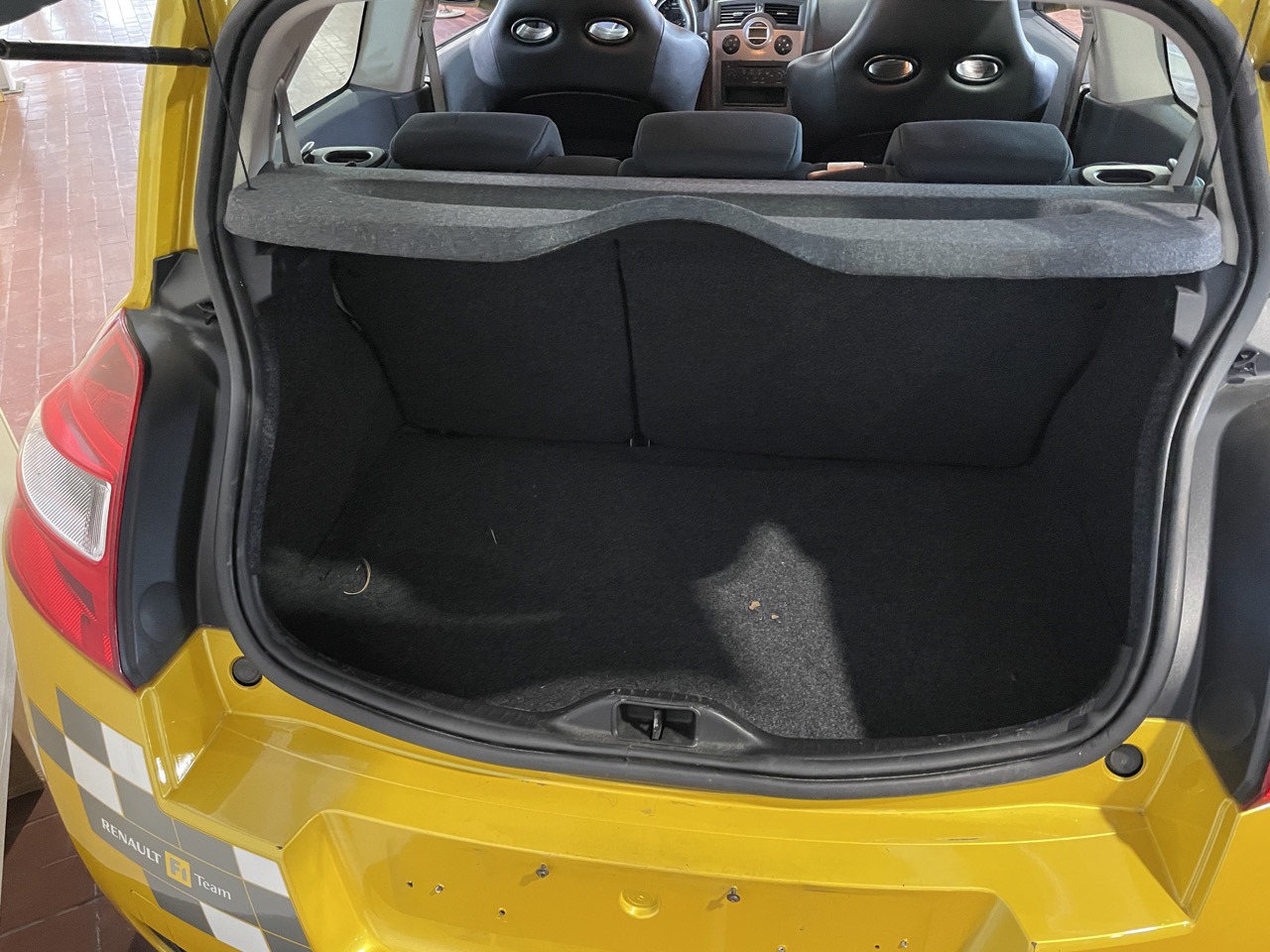 The Mégane II debuted in 2002, which means us regular Americans will have to wait 5 more years to import the mild, and 9 more years for this spicy version. 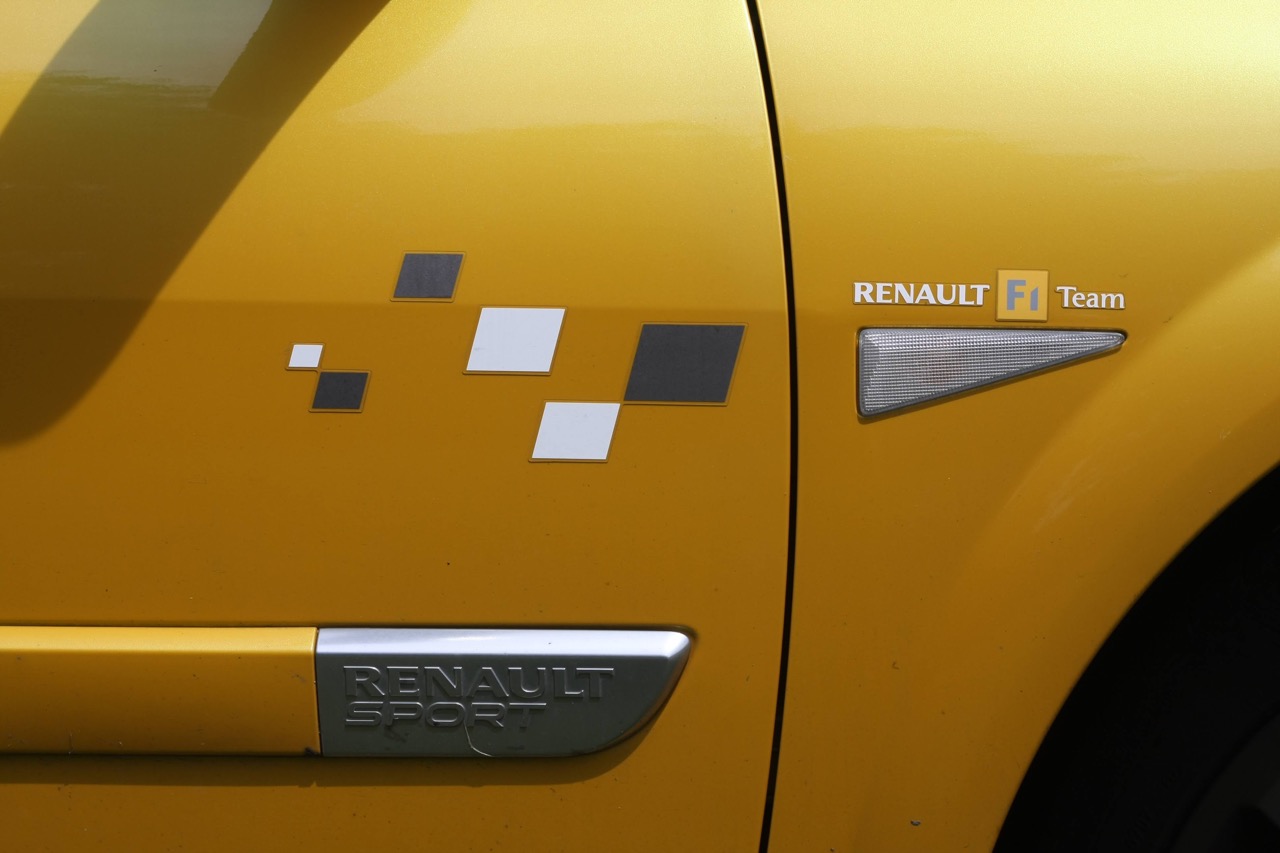