Ever get an idea in your head that starts small and then kind of snowballs into something well beyond what you intended? That happened to me this morning. I was looking at a picture of a car, focused on a detail, then that reminded me of another unrelated car, and that led to some quick Photoshopping and then that lead to Photoshopping another car, just because conceptually the first demanded a counterpart, and next thing you know I’m making a freaking front-engined Porsche 911 and a rear-engined Ford Mustang. The hell is wrong with me? Anyway, let’s go on a little journey into what could have been, but wasn’t. 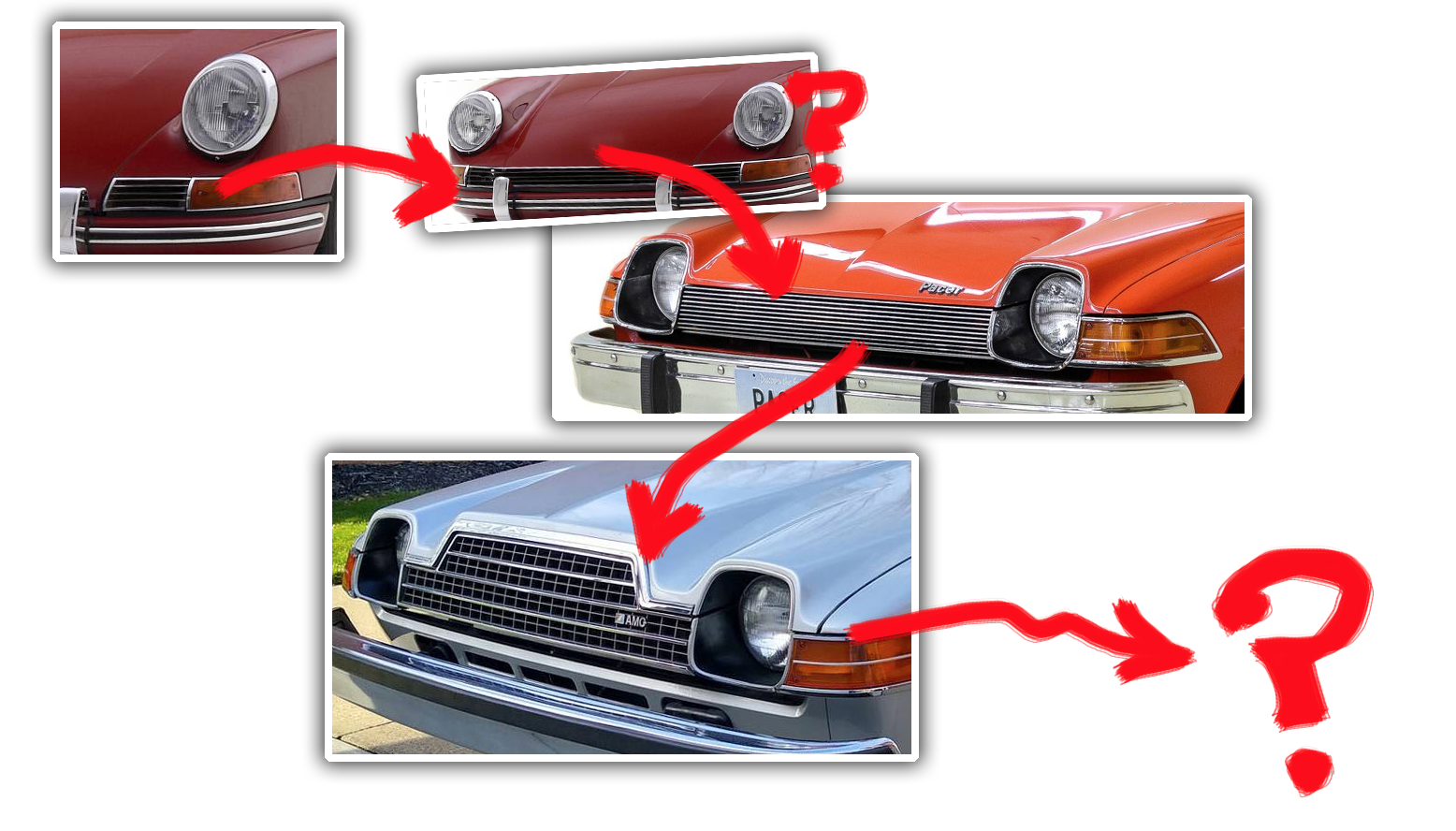 The car I was looking at was a 1965 Porsche 911, specifically the little horn grilles on the sides, under the headlamps. I started to imagine what a 911 might look like if those grilles went straight across the front, ahead of the hood’s front edge. And that weirdly reminded me of an AMC Pacer, of all cars, and then that reminded me of the Pacer’s other grille, and then I realized, holy crap, I bet a front-engined 911 might have a grille like that.

That’s when I made this: 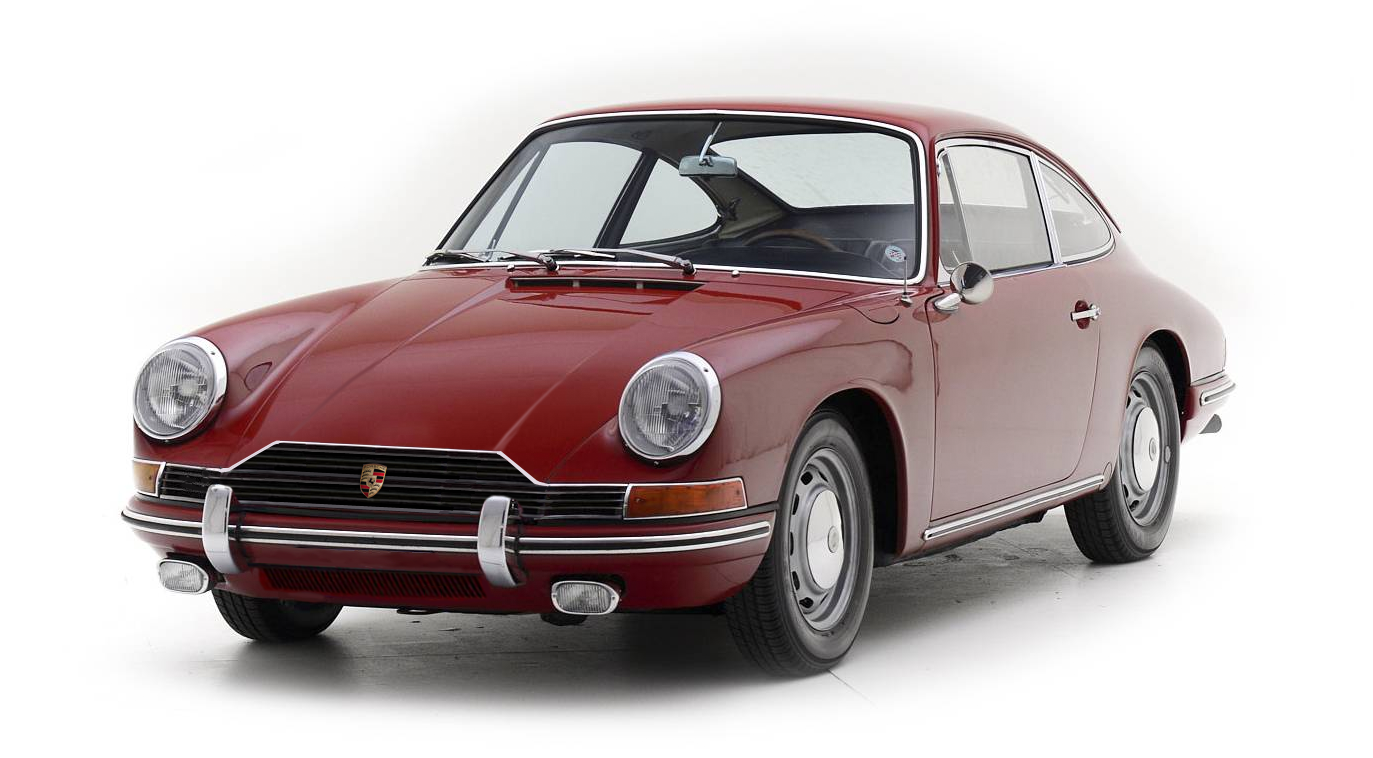 A front-engined 1965 Porsche 911. Once I got started playing with this idea, I couldn’t stop because, somehow, I liked where it was going! It makes no sense, I know – the 911’s entire character and identity are all bound up with the fact that it’s got an engine hanging off its ass–is the vehicle above even a 911 anymore?

What if the engine were still a flat-six, still air-cooled, just jammed under that front hood? It’d probably need a bit more height, so we’ll kick up the middle of the grille and let the two creases already in the 911 hood define where those raised corners go. Shit, I like it. The grille changes the look of the 911 much more than I’d have guessed, too. It almost feels British now?

Well, may as well do the rear: 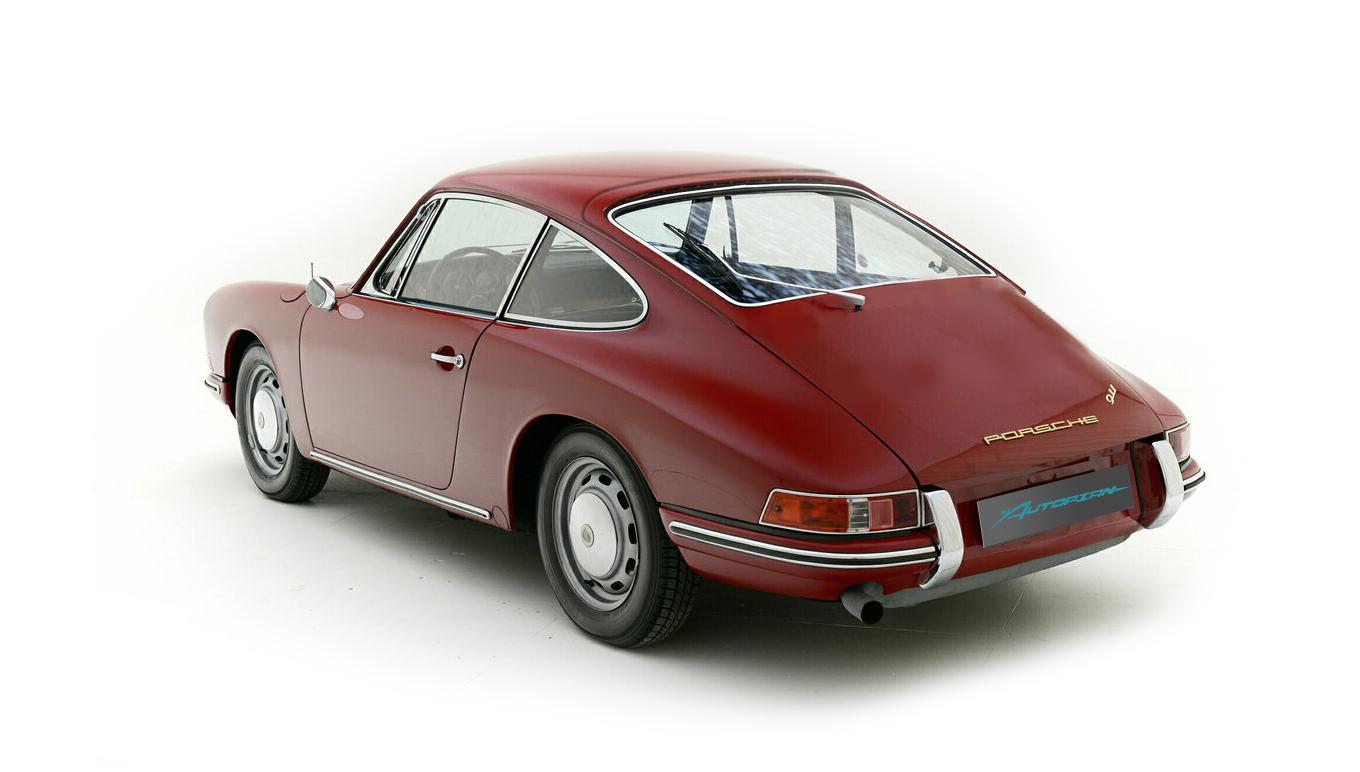 The 911’s fastback shape already lends itself to a big hatch, so that’s what it’s got. That’d be pretty practical! You could jam a lot of stuff in a hatch like that — especially if you fold the seats down. I bet you could haul a lawnmower in there with the seats down and the hatch open.

In fact, let’s look at what the layout of everything could have been like in a front-engined 911:

I’m thinking Porsche would have stuck with a transaxle (combined transmission and differential in one unit, remember) design for the rear, since they’re used to making those, only this time there’s a driveshaft involved. The gas tank would be somewhat saddle-shaped to clear the central tunnel and driveshaft, the spare would move under the hatch floor, which, as you can see, would be very roomy.

That engine should have no problem getting plenty of air, too! Honestly, this isn’t the worst layout for a 911, as perverse as that is to say.

But now I’m conflicted, because I adore rear engines. I can’t convince myself one of the most iconic rear-engined cars could have worked well with the opposite layout! So, to be fair, I better do the same thing to some iconic front-engine car of the same era, and maybe I can balance the Universal Scales by convincing myself it’d be better rear-engined. 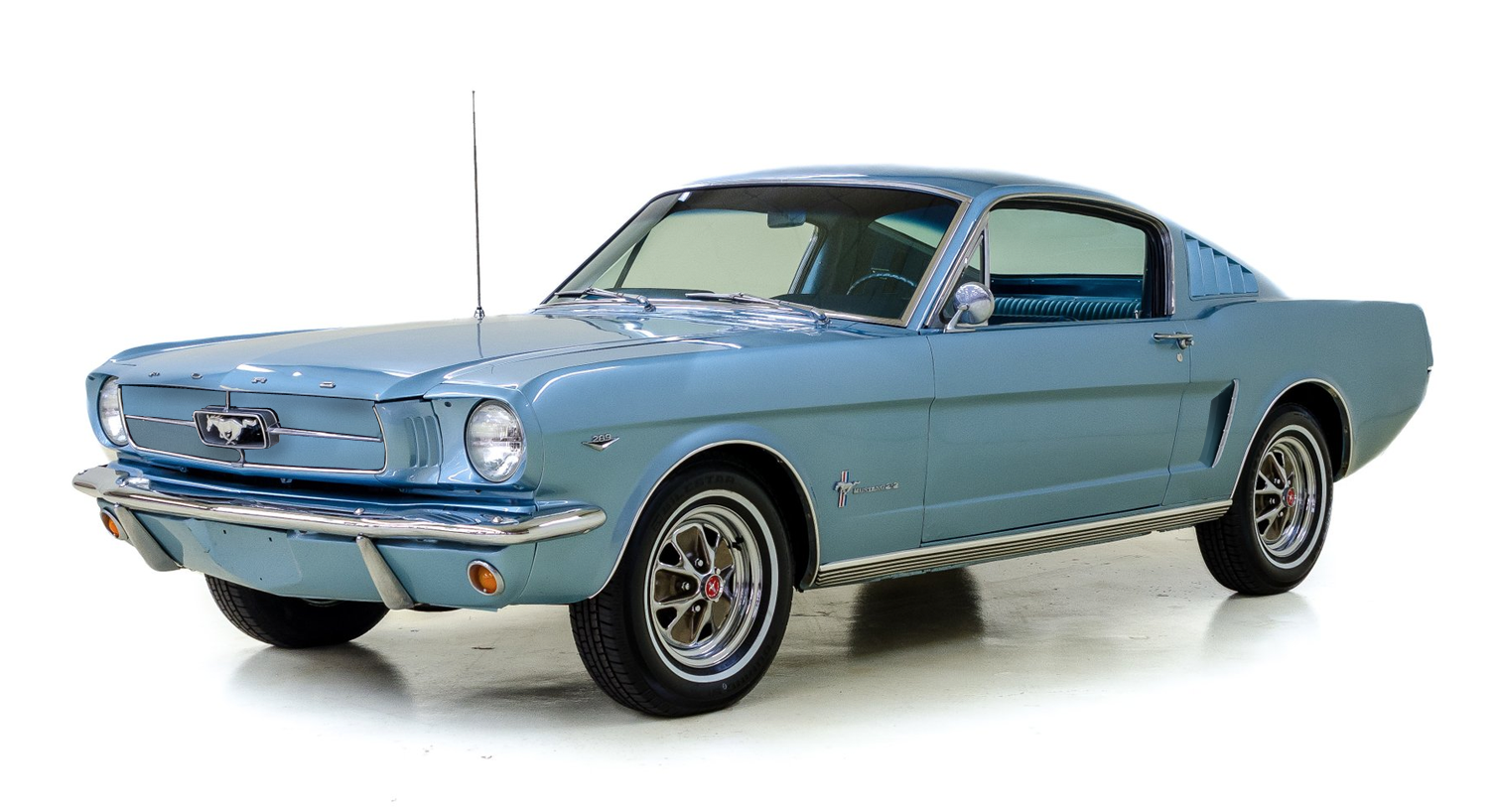 In a strange way, the Mustang actually kind of lends itself to a non-front-engined design. Remember, the original Mustang concept had a mid-engined setup, and gave the Mustang its trademark (but fake) side air intake scoops, so this general idea isn’t as foreign as it may seem at first glance.

So, if we’re going to shove all of the hot, oily bits of the Mustang at the back, I think the early fastback design is the best candidate, for reasons you’ll see soon. To make this work, the Mustang’s grille will go, though we can keep the general brightwork and central horse badge, because Ford loves that kind of thing, and I’m pretty sure they’d want that on there, grille or no.

Then, we’ll make the fake side air intakes real, and use those to feed air into a pair of small radiators, one on each side. 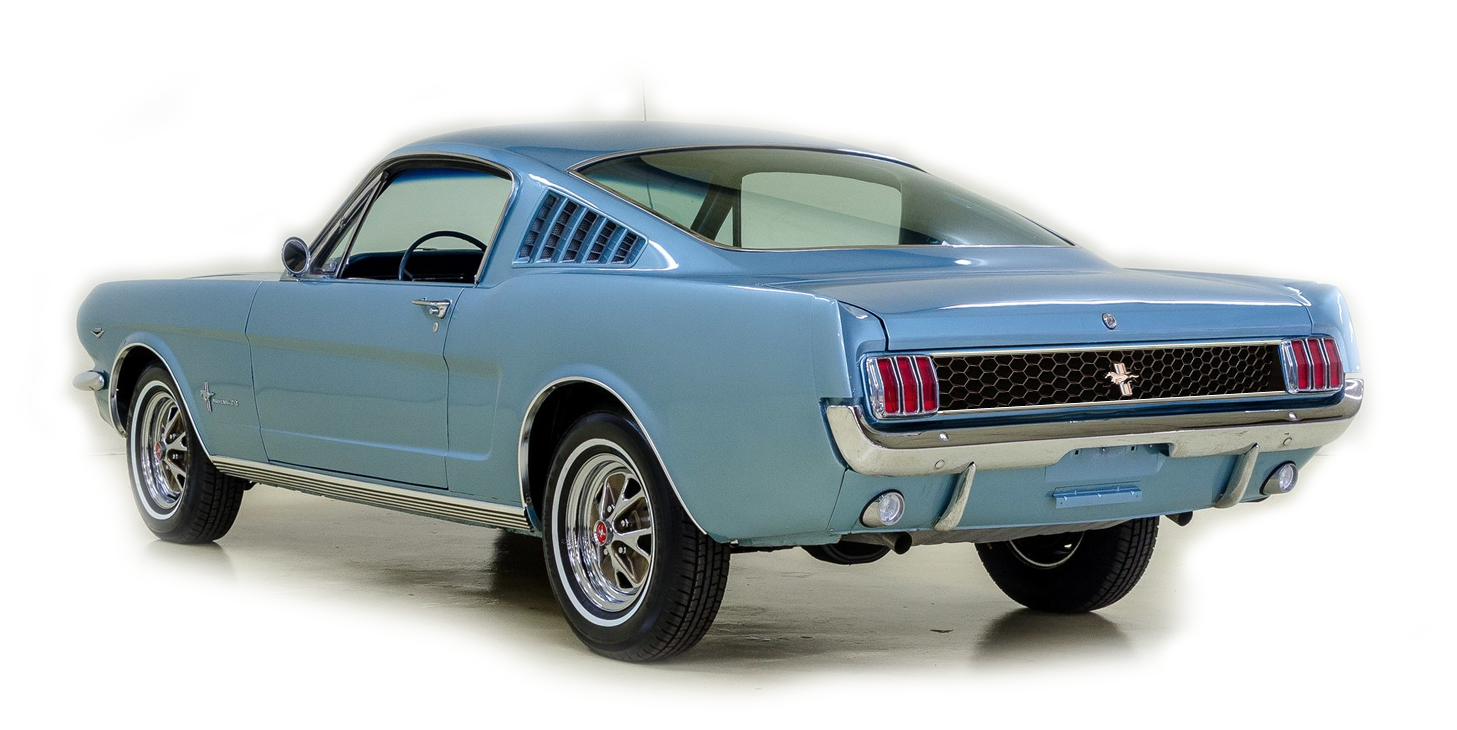 Around the rear, we’ll put a full-width grille between the taillights for hot air from the engine to escape from, and we’re going to re-purpose those B-pillar vents on the fastback roof to feed air into the engine’s carb.

Layout wise, I think it could all look something like this. I’m using a transaxle design here, too, since those just make sense for rear-engine designs. With no driveshaft needed, we could lose the central tunnel, if we wanted to, for more interior room. I’m thinking the V8 would be the preferable engine here, since a straight-6 would be longer and hang out even further rearward, which isn’t great for handling.

The fuel tank I think could be sort of L-shaped, under and behind the front trunk, which looks like it’d be a pretty good size. This layout would also give much better traction than the actual-world front-engine Mustang, but would have made handling potentially squirlier.

Of course, maybe the oversteering handling would have been a plus for a car like this? Think of the donuts you could do with all that weight at the rear!

Dammit, I like the rear-engined Mustang, too! Look what I’ve done to myself: I’ve made myself interested in versions of two of the most iconic cars ever, changes that are likely anathema to true devotees of both cars, and which, of course, don’t exist.

Don’t say I don’t know how to have a good time.

I'm a co-founder of the Autopian, the site you're on RIGHT NOW! I'm here to talk to you about taillights until you cry and beg me to stop, which I absolutely will not. Sorry. Hug? Also, David's friend.
Read All My Posts »
PrevPreviousDARPA’s Autonomous Vehicle Development Program Returns To Rugged Terrain
NextThis Legendary Mitsubishi Evo VIII Owner Got His Car To 300,000 MilesNext