Hello fellow Autopians and welcome to another edition of Ask An Engineer. We got a question from a reader a few days ago asking why the steering wheel in his car seems to move up and down as he turns it side to side. It looks like the steering wheel is not centered on the steering column and that it’s “wobbling” as he turns. Our reader was wondering why an OEM would do this, so let’s get into it.

First the email that prompted this story:

I was driving this weekend and while making a U-turn, noticed that the top of the steering wheel moved up and down as it was being turned.  I have noticed this before.  Most steering wheels are not absolutely concentric with the axis of the steering column.  The 12 o’clock position while driving straight ahead seems to be high point.  It is not out by much, maybe a half inch or so, but enough to be quite noticeable.  I wonder if there is a reason for this?  It sure seems like a centered steering wheel that is on center and concentric would be normal, but maybe there is something I am missing?

In case you haven’t noticed this yourself yet, here’s a video of it in action:

The first reason is that the position of the steering wheel dictates how much of the instrument cluster is visible to the driver. If the wheel is positioned too low, the rim of the wheel might block the view of the cluster. Something like: 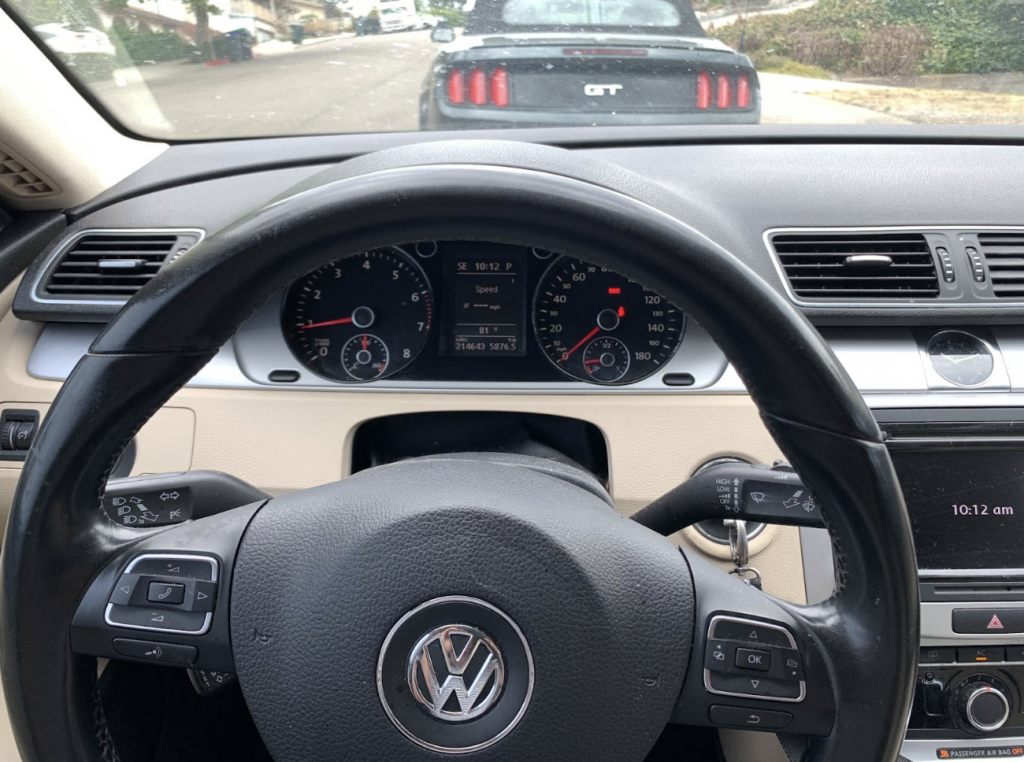 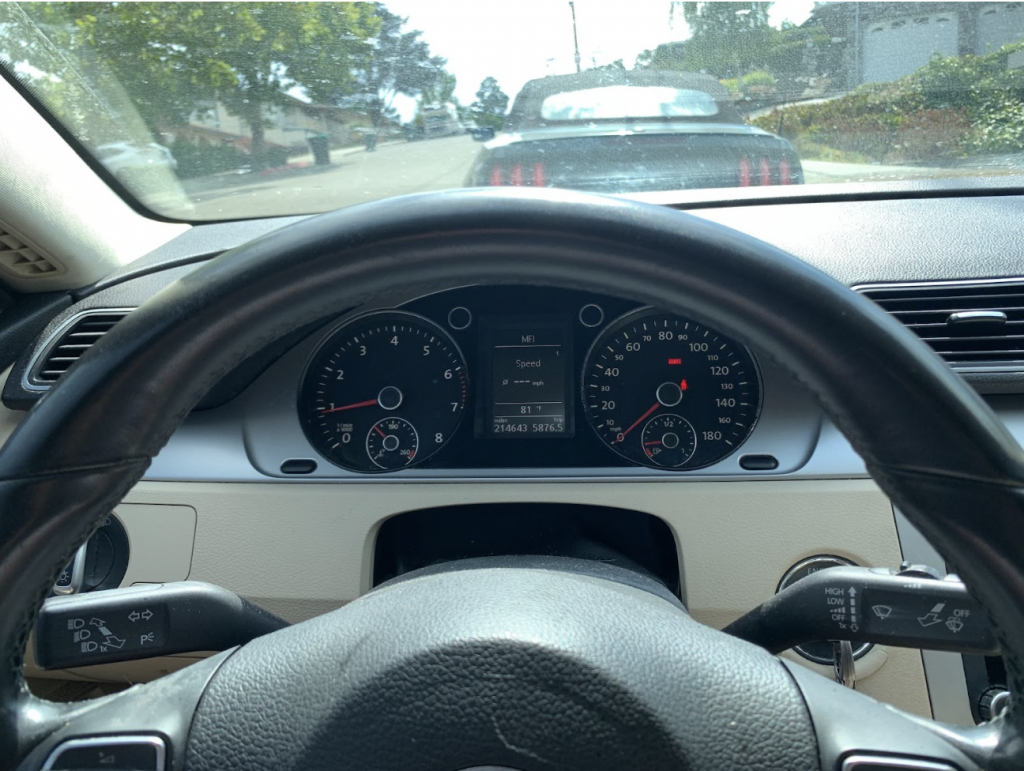 [Editor’s Note: As you may have guessed, instrument visibility is a very big deal, and there are lots of regulations that explain just how visible everything needs to be. Those regulations, according to our very own friendly neighborhood car designer Adrian Clarke, are described in SAE J941-92, which is titled “Motor Vehicle Drivers’ Eye Locations.” I asked Adrian to explain these regulations a bit, and here’s what he had to say:

“Because human meat bags come in all shapes and sizes, engineers use what is known as a 95th percentile male human manikin. They haven’t come up with this by say, eyeballing the body shapes of who is in front of them in the lunch queue. It’s an actual standard drawn up by the Society of Automotive Engineers defined in SAE J826, and it defines exactly a set of dimensions that are used to set up occupant position, and more relevant here eye position (although it’s defined as a male manikin, the standard incorporates a 97.5th percentile female as well, so put the pitchforks down). It covers 95 percent of all human body sizes so it ensures most people, unless they are basketball players, should fit your car. Because the eyeball position is known (SAE J941 if you can’t sleep), a projected view can be used to make sure the main instrument panel is visible through the top of the steering wheel.”

Hope that helps. Also, check out what the diagrams are like in SAE J941-42: 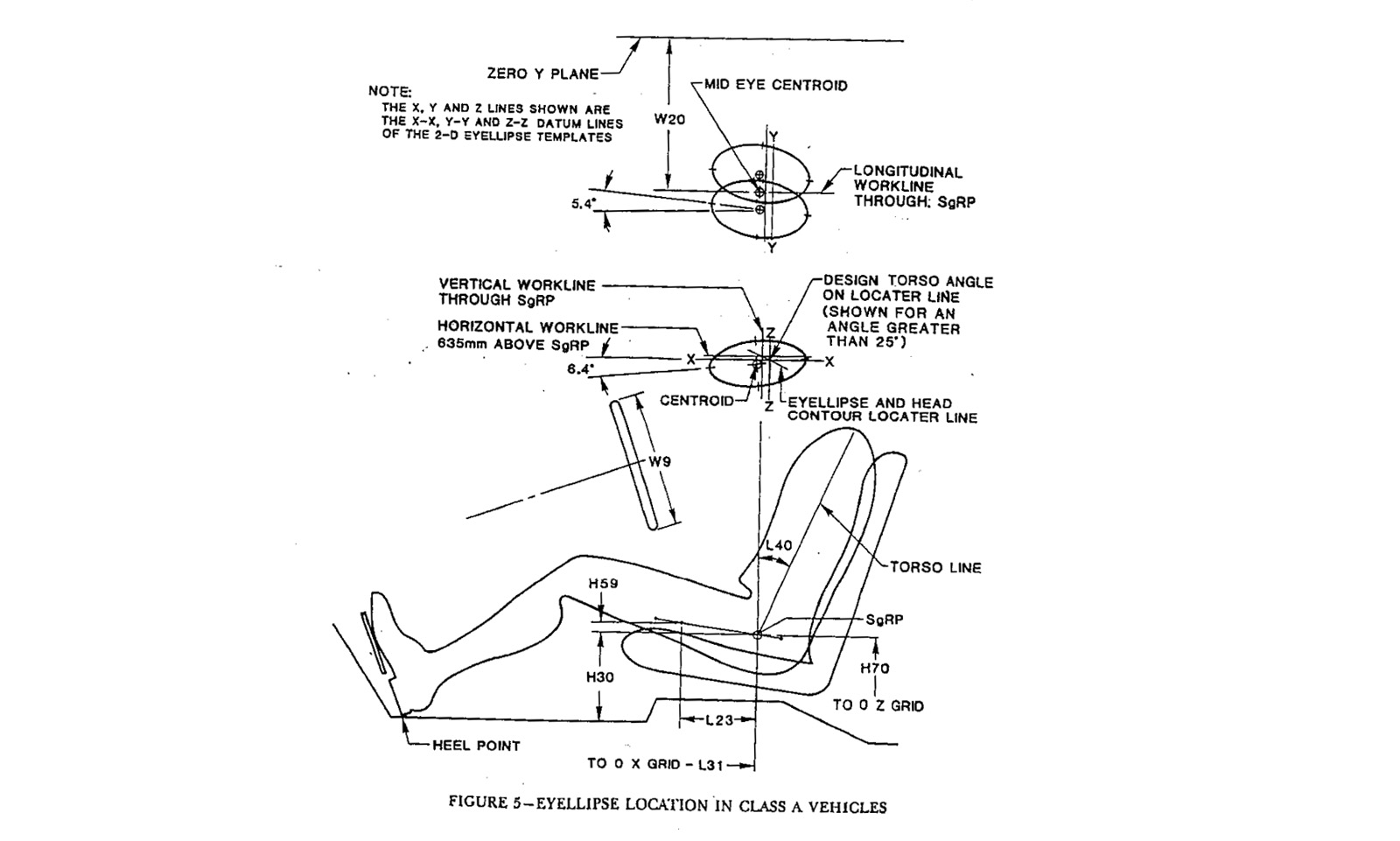 You might now be asking “why not just make the wheel bigger?” That is certainly an option but a larger steering wheel might not look or feel nice. Have you ever driven a car with a steering wheel that’s too big? It feels like you’re driving a bus. 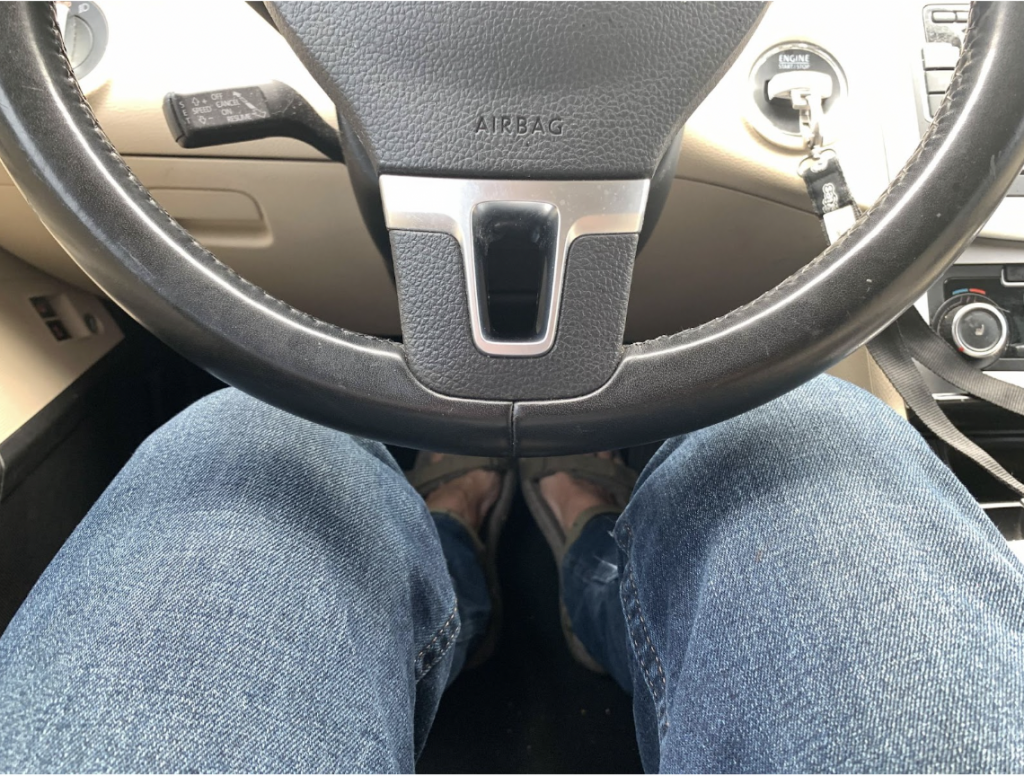 And here it is with the wheel turned 180 degrees: 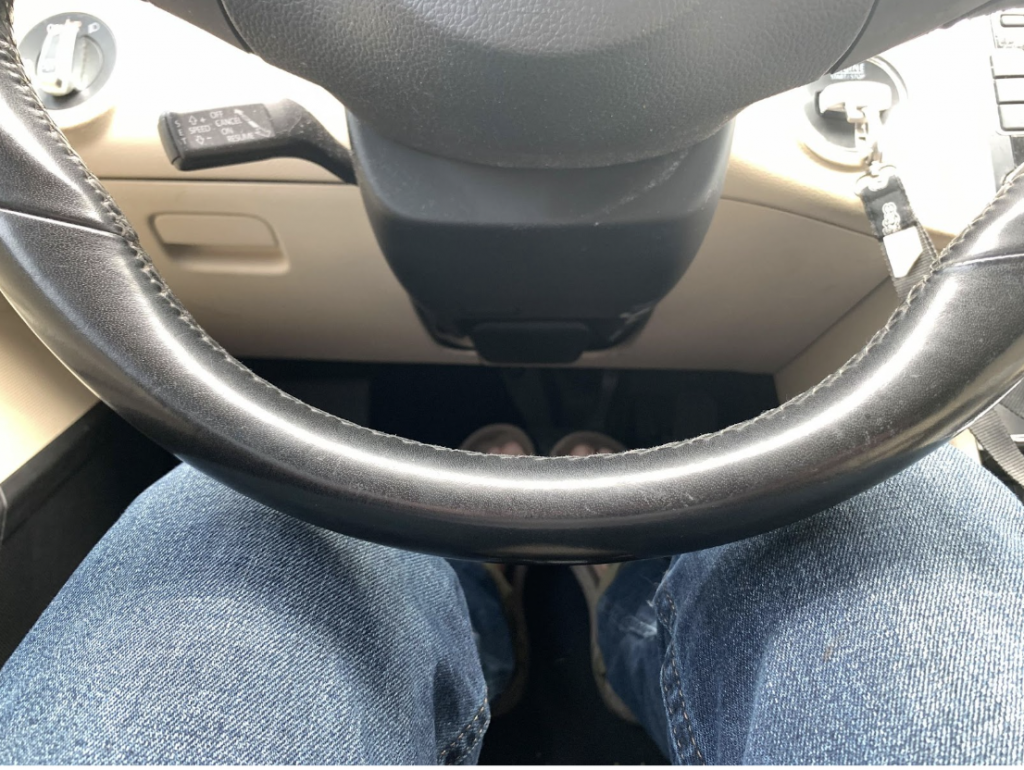 You can see how much more space there is to my knees with the wheel straight ahead. If the steering wheel were perfectly centered in this car, I would have much less clearance to my knees. For tall people with long legs, like myself, this extra space is very welcome. It doesn’t really matter that the extra space is gone while the wheel is turned since that represents a very small percentage of the time we spend in the car.

OK, so why not keep the steering wheel centered and just package the whole column and wheel assembly higher in the car? In some cases this might be possible and in cars where the wheel is centered that is exactly what they were able to do, but in other cases, like the VW, it may not be possible. The column has to fit with all the other systems in the car (like the brakes, the pedals, the AC system, the electrical system, the body structure, etc.) and the placement of these systems might prevent the steering column from going any higher than it is.

Another reason is that the steering column plays a major part in the safety of the car in the event of an accident. When the airbag goes off in a crash, the steering column has to carry the force of the driver hitting the airbag. The position of the column relative to the airbag and the driver is critical to the overall performance of the restraint system. We can’t just randomly choose a column position, it has to work as part of a much larger system.

Put all of these things together and you could easily have a situation where the rim of the steering wheel partially blocks the driver’s view of the instruments or gets in the way of his/her knees. The easy solution often is to just move the steering wheel up slightly in a way that most drivers will never notice or be bothered by.

What I wanted to add was that the offset in the wheel also allows for a larger opening between the top of the airbag and the wheel rim. Again, better for instrument visibility. As far as wheel adjustment goes, as Adrian noted, the steering wheel is located in the vehicle using a 95th percentile mannequin. This means that the visibility of the instruments would be ideal for someone who matches that body shape and size. For all others who might be taller or shorter than the mannequin, vertical adjustability of the steering wheel and column, i.e. the tilt function, allows for these drivers to also have a clear view. Having tilt adjustability doesn’t eliminate the need to offset the steering wheel though, since everything is setup around this 95th percentile mannequin.

I have been an automotive engineer for all 31 years of my career, mostly leading chassis design work. Some fun suspension projects I led: The 2005 Ford GT and 2012 Tesla Model S.
Read All My Posts »
PrevPreviousIn The Midst Of An Investigation, NHTSA Wants More Information On Tesla Driver Monitoring Systems
NextHow Would You Have Spent $300,000 At Pebble Beach?Next