How This Piece-Of-Crap 2009 Chevy HHR Is Threatening To Ruin My Weekend, Also Possibly My Life

Last night I reached a local minimum, as they say in calculus. It’s not my absolute wrenching low point, since I’ve been through worse and I suspect I’ll go through worse in the future, but last night was bad. Anytime you’re wielding a sawzall at midnight, lying on your back on an oil-soaked driveway, swearing to the heavens to just let the damn blade cut through the damn broken bolt, you know things are bad. Adding to the pathetic nature of my current situation is the fact that this HHR, which I recently acquired, is my ride to a Ford press event tomorrow, and then to New York the following day. That’s over 1,000 miles in the cards, and I have to get it ready, like, right now. I am screwed.

It Seemed Like A Nice Car That Would Help Two People Out. So I Bought It

A number of months ago, a friend of a friend who’d recently flown to the U.S. from France to work for Stellantis needed a car. He’d been renting during a hot renting market, spending loads of cash each week for some sad econobox, and I just couldn’t bear it. I set out to find him a reliable, cheap, and economical car. To do so, I followed my own advice of buying an “Ugly Stick,” and the ugly stick I chose was the Chevrolet HHR. I figured it’s got a stout 2.2-liter Ecotec engine in it, a good Getrag five-speed manual transmission, and cheap, easy-to-replace bones. (That last part, I’d later find to be only partly true).

Anyway, the French engineer drove the HHR for a few months, and then unexpectedly had to leave Michigan. He put his car up for sale, but struggled to get a buyer despite the fact that the car is almost entirely rust-free, and has only 127,000 miles on the clock. After a number of months, he texted me saying he was having issues parting ways with his HHR, and — as I felt guilty being partly responsible and didn’t want him taking a bath on the car I’d recommended he buy — I bought the vehicle for $3,000, or $200 less than he’d spent.

I’d test-driven the car eight months prior, so I didn’t bother driving it before forking over the cash. I planned to thoroughly inspect the vehicle, then drive it to my good friend Bobby‘s mom’s house in upstate New York. She’d been looking for a good, reliable car, so I figured I could help two folks out at once by being an intermediary. The problem was, the HHR began crumbling, just as many cars tend to at around 100,000 miles.

I’d been through this before when I bought a 2009 Nissan Versa for my brother’s girlfriend. It seemed nice, with only 98,000 miles on the odo, but nothing had been maintained. And this is why I consider cars with between 80,000 and 130,000 miles to be “high risk” purchases, only in that they tend to command a premium over “high mileage” cars, but they don’t necessarily present an advantage from a reliability standpoint. I think it’s safe to say that people tend to defer maintenance as long as they can; that’s the layperson’s strategy, at least. And the reality is that original parts like water pumps, tie rod ends, wheel bearings, ball joints, struts, and spark plugs can hang in there for 100,000 miles. But usually not much longer. In the case of the Versa, I had to replace all of these parts, and this HHR is going down that same path.

I’d rather have just bought a 150,000 mile HHR. At least then I’d have paid less, and I bet the big things like the motor and transmission would have been just fine, as those tend to last well into the 200,000 mile range. Of course, the body likely would have been rustier given that I live in Michigan, so my $3,000 purchase wasn’t a bad one from that perspective, though it is ruining my life.

This HHR needs to be not just in running condition by the end of the day, it has to be in “capable of driving 1,000 miles”-condition by the end of the day. Why? Because I have the pleasure of driving the new Ford F-150 Raptor R on the west side of Michigan tomorrow. From there I’m driving to New York to hang out with my friend Andrew Collins. Then I chill with The Autopian’s publisher Matt Hardigree before we head into New York City to fly to SEMA in Vegas.

Clearly, getting the HHR driving is important. A Ford event, a Halloween party with Andrew, an opportunity to hang with Matt’s awesome family, and SEMA all rest in the (control) arms of this HHR. I already changed the oil, ground the rust off the bottoms of the doors and repainted them, swapped serpentine belt, and  threw in spark plugs as well as an air filter and cabin air filter. It’s noon, and I still have to do all this:

That’s a lot of work, but definitely nothing I couldn’t knock out in a few hours plus whatever time it takes my local shop to mount and balance my tires. The problem is, I live in Michigan, so these simple jobs aren’t actually simple. They’re ruinous.

Things are bad, and it’s because of poor forethought on GM’s part. I’ve managed to get all the tie rods and even the wheel bearings off the car, but the one thing that’s holding me up are the dastardly control arms, whose rear bolts thread into a captured nut on the car’s body. Usually what happens is people put a huge breaker bar on the bolt, and when they go to spin it, they break the cage holding the nut free from the body, and the bolt and nut both spin together. Removing the bolt then requires use of a sawzall to cut between the control arm and the control arm brackets on the subframe. In my case, I didn’t break the weld nuts, because the bolt was seized into the metal sleeve in the control arm bushing. Here’s a look at the situation: 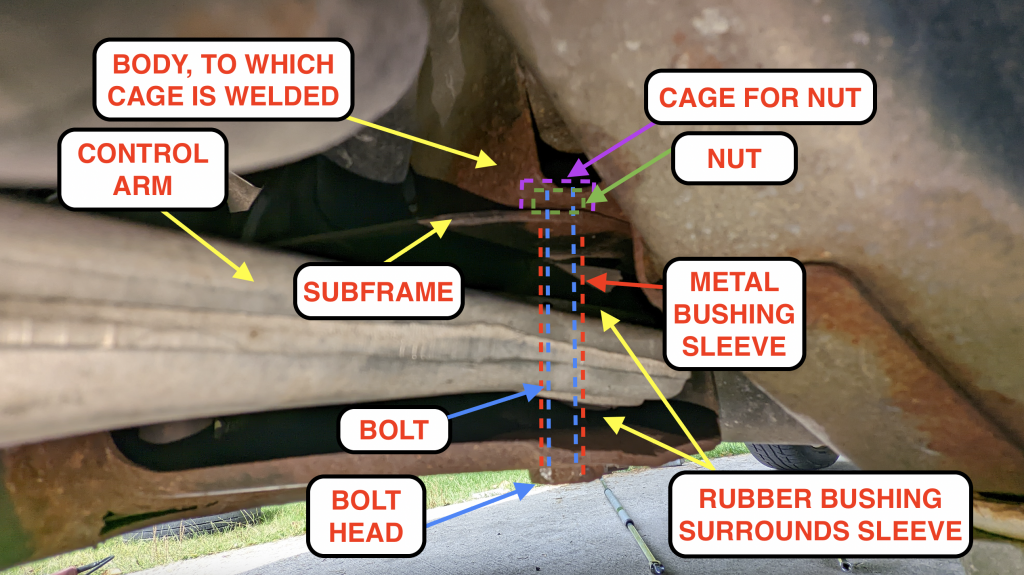 Here’s a closer look at that bushing and its metal sleeve: 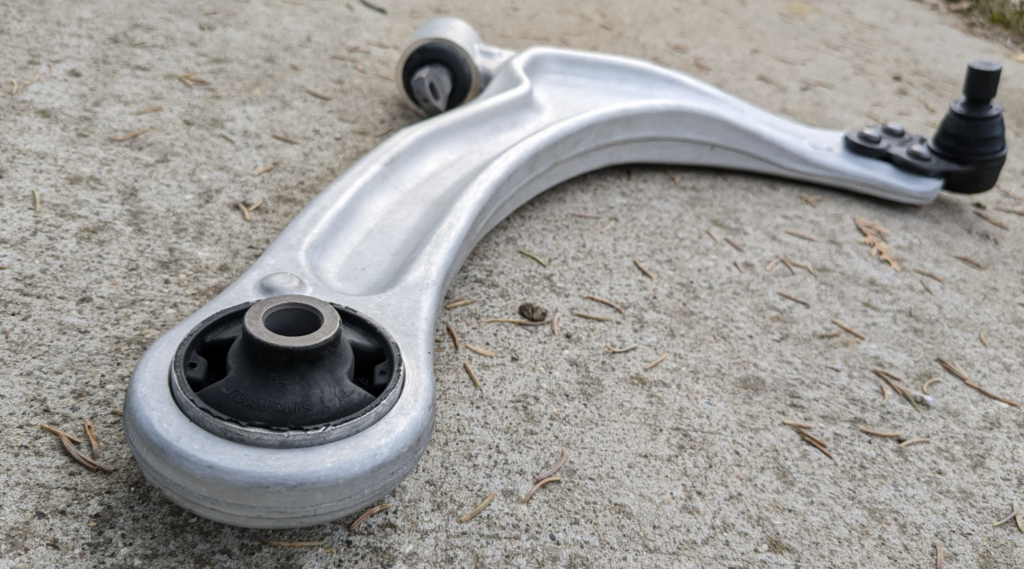 Here’s the cage that is supposed to keep the nut from spinning. I found this poking out from a hole in the unibody, so clearly someone had tried to remove this bolt before, and broke the cage’s welds: 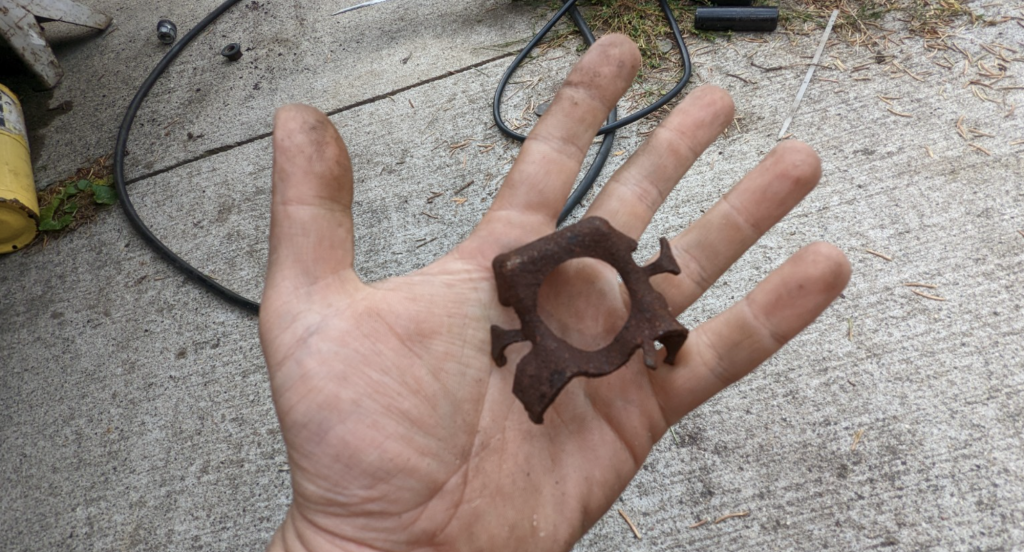 That leaves just the square nut atop that section of the body: 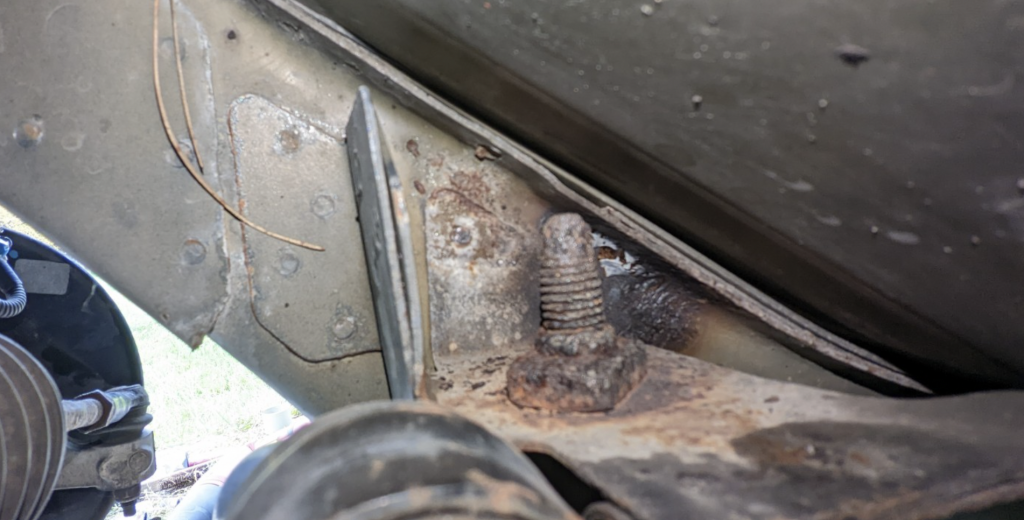 In my case, the bolt (in blue in the diagram) seized to the bushing’s metal sleeve (in red), which itself is being squeezed between the two bits of subframe by the clamp load. The result is that the square nut above didn’t spin since the bolt and the clamped sleeve are one thanks to rust. Nope, what happened is, I sheared the bolt head right off: 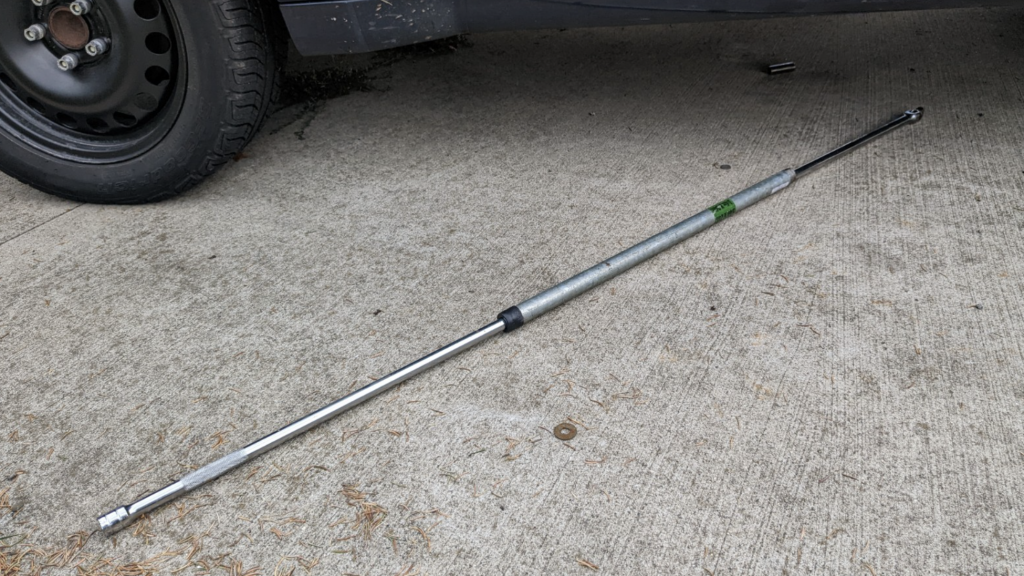 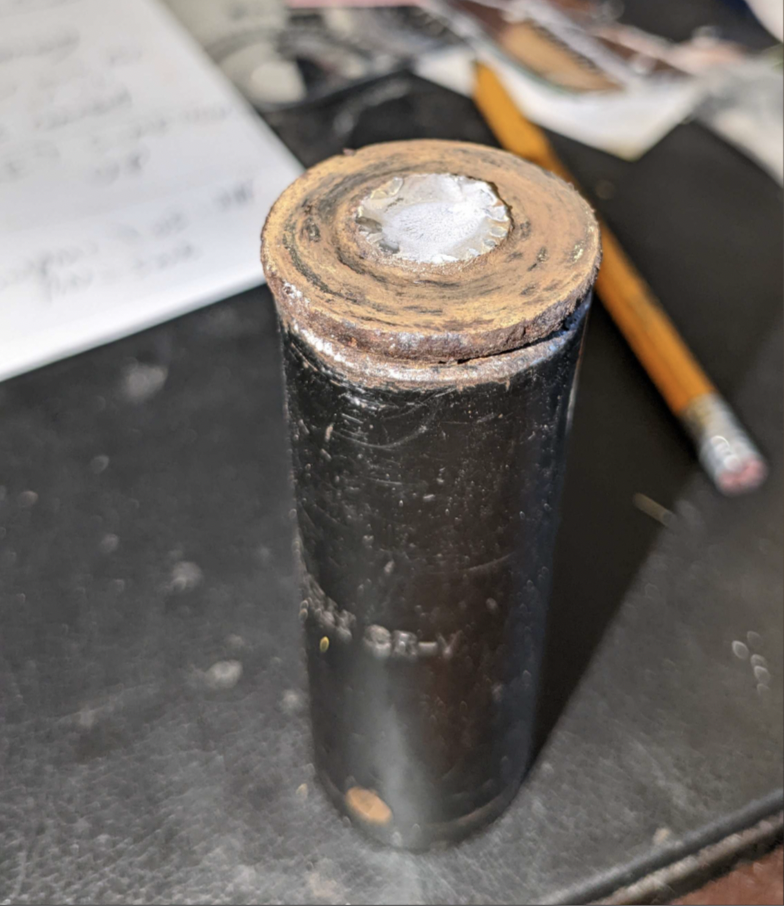 This happened despite copious amounts of PB Blaster poured all over the weld nut, and despite tons of heat from a MAPP gas torch. I anticipate a similar result on the driver’s side.

So what do I do about it? Well, I’m going to have to sawzall the crap out of the bolt. Here I am trying to do that last night, but to no avail:

I’m heading to Home Depot now to buy the best Sawzall on the market. Then I’m going to get the best cutting blade on the market, at which point I will try to cut that stupid sleeve and bolt. It will take forever.

Once I’ve done that, I’m going to have to hammer the welded cage (if it’s still there on the driver’s side) with a punch, hopefully breaking the welds so I can slap a regular nut on the back side of the new bolt that I buy from a Chevrolet dealer. This is all going to take a lot of time, and oh [looks at clock] it’s already 12:15. I’m running very late. I leave tomorrow around 11 A.M. for the west side of Michigan to drive that Raptor R.

Anyway, I’m off to get this sawzall, hopefully cut some things, buy a bolt and nut, and maybe cobble all this stuff together while a tire shop installs tires onto wheels. While I’m gone, I’ll leave you with some videos from other poor bastards who have had to deal with this horrible GM design:

This guy says “do not despair,” but I disagree. Despair:

And here’s another poor bastard:

Oh, and it’s going to rain tonight and tomorrow morning. Something tells me I’m not taking this HHR anywhere tomorrow.

Rust-loving Jeep man, cofounder and EIC of The Autopian, Jason's friend. Email: david@autopian.com
Read All My Posts »
PrevPreviousCheck Out This Instagram Account That Uses AI To Create Some Of The Coolest Cars That Don’t Exist
NextThe 2023 Toyota Crown Is A Crossover Sedan That Isn’t Boring Despite The Fact That Toyota Sedans And Crossovers Usually AreNext