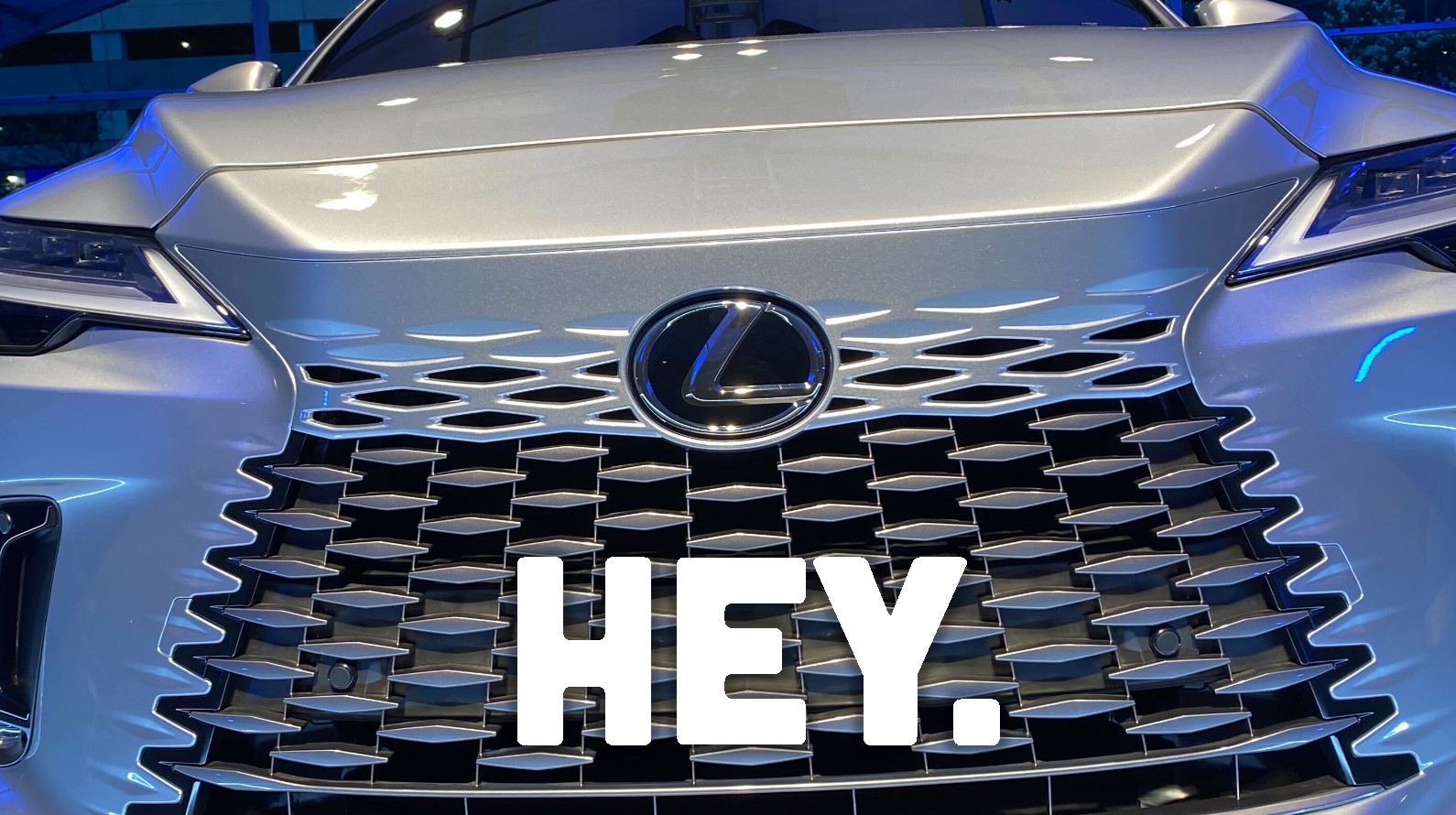 The 2023 Lexus RX was just exposed to the collective mass of humanity, and like all recent Lexuses (Lexi? Oh, wait. It’s just “Lexus.”) the design has left me a little confused, mildly unsettled, but not bored. So that’s a positive. We have real, actual, working designers on our writing team, so I’ll likely leave a full design review to them (also because I’m at the press event and it’s so late and I’m so very tired) but I just wanted to note a few design elements that Lexus is using prominently, and ponder them. These things are about to be absolutely everywhere on our roads soon, so we may as well come to grips with what they look like. Let’s get started.

I’m surrounded by a bunch of Lexuses at a Toyota press event at the company’s headquarters in Plano, Texas, so I figured I’d walk around and talk about the new RX’s design, as well as the design of the rest of the brand’s models. Because none of it is boring. 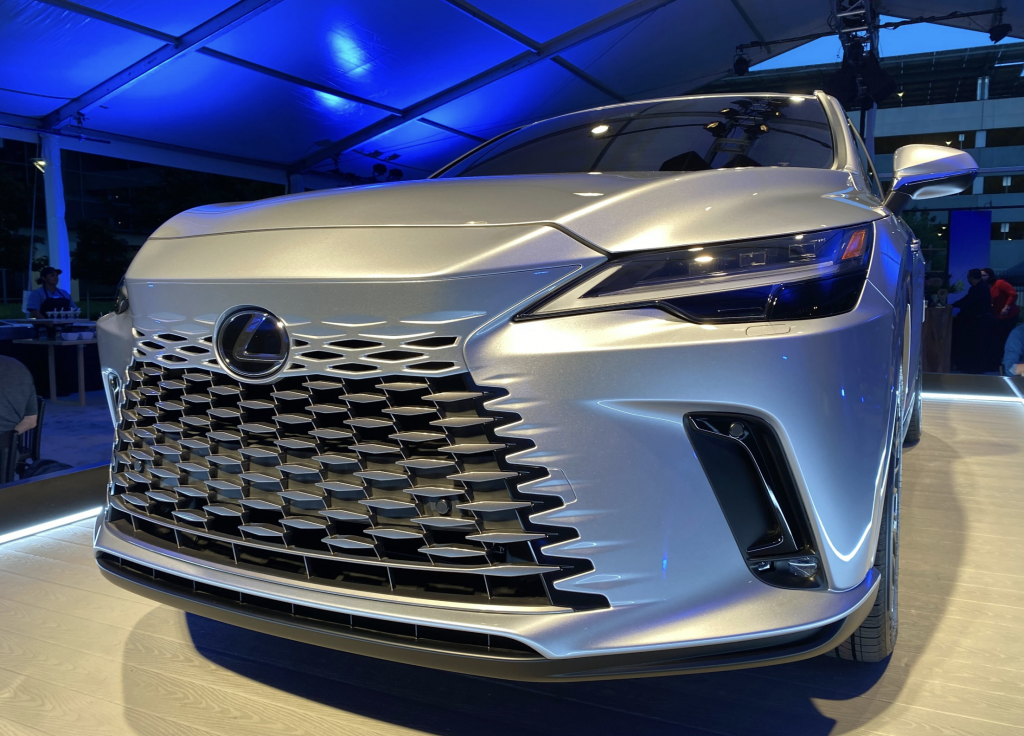 The thing you likely noticed before anything else on the new RX is the very, very prominent nose of the car. The traditional Lexus Predator-mouth/spindle grille is here, but it has lost its border and now appears to be a floating school of elongated diamonds that flows out of the rest of the front end, and that part I do like.

The grille itself has a sort of mid-century screen feel to it, and I think it works, though the transition from positive-to-negative-space diamond elements that happens at the line of the logo I think could have been handled more smoothly.

But it’s above that where your eyes get drawn — to that massive, protruding bulge that does indeed resemble the schnoz of a blobfish, but if we want to be more charitable, we can also liken it to a shark: 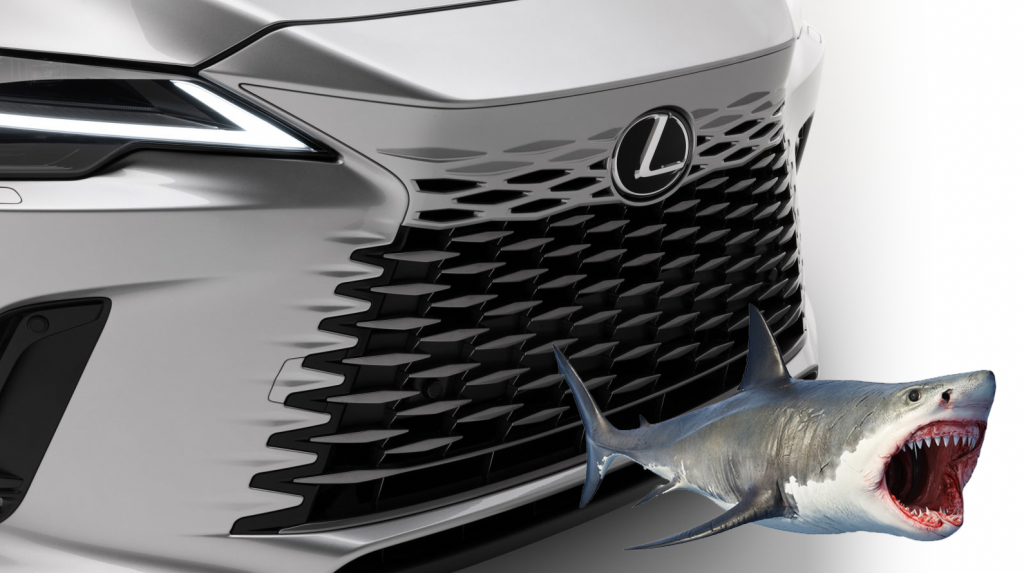 I guess Lexus’s designers were going for aggression and force, but it looks squinty and grimacy. There’s also that massive, hard-to-ignore cutline of the hood that feels like something the designers were fighting against, as opposed to working with.

Look how massive that nose section is with the hood open: 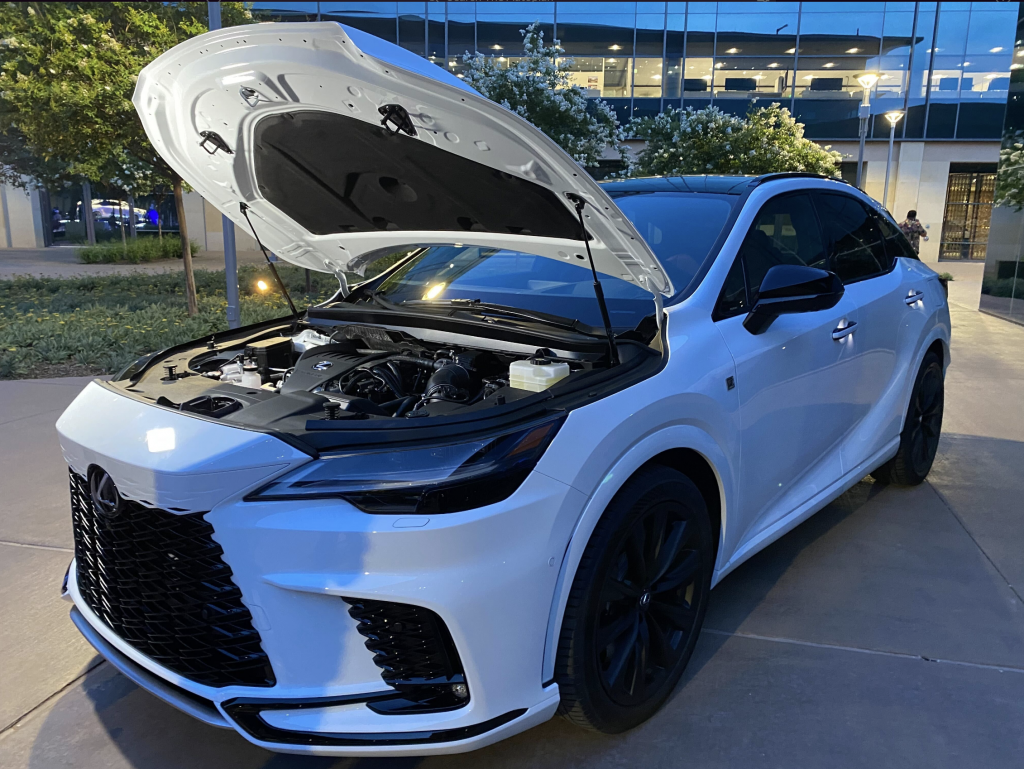 It’s just a big object hanging right off the front of the car, and I’m just not sure if I like it, though I expect it does wonders for pedestrian impact regulations, especially in the off chance that it’s made out of a marshmallow.

Here’s a detail I do like about the new RX: 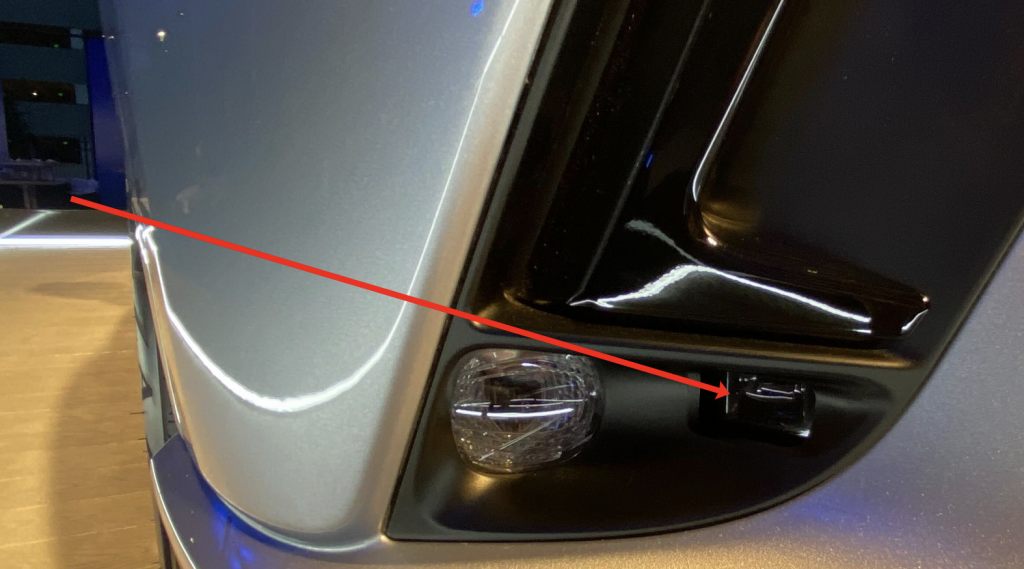 See that? That’s the passenger-side cornering light! These are worthwhile safety tools, as they do help you to see around corners, which is why this lamp points at what’s close to a 45° angle out from the car. I always appreciate a good cornering lamp. 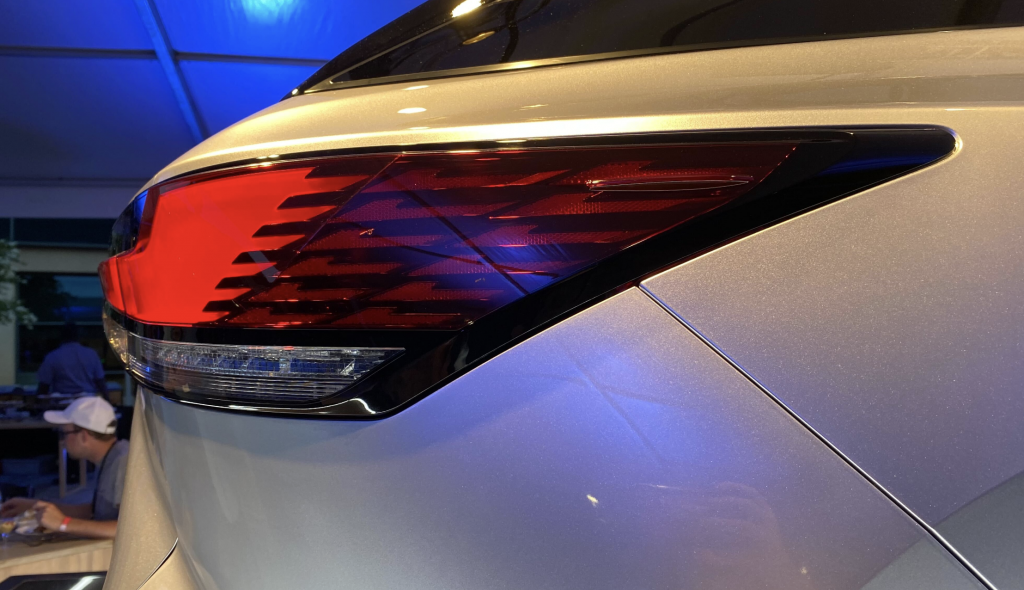 The new RX’s lighting designers gave some good attention to a lamp that rarely gets the love it deserves, the side marker lamp. This rear side marker is large and bold, with a wing-like outer shape that is reinforced with a sort of techno-feather pattern in the reflector itself, giving some nice texture and drama to the rear marker lamp.

After all, what’s the point of side marker lamps if not to bring more drama into the world? 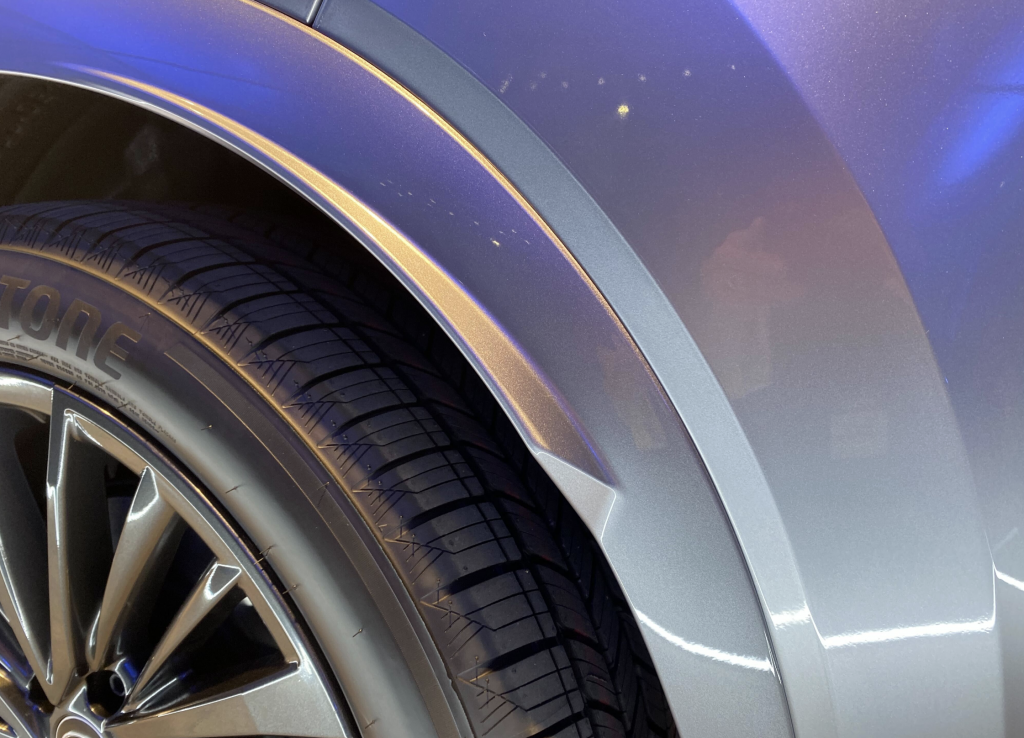 The wheelarches on the 2023 Lexus RX are interesting, too, especially the rear ones, which feature those odd little arched flare/fin things that grow out of them, likely for aero reasons. They’re kind of cool, but they also make everything down there pretty busy. 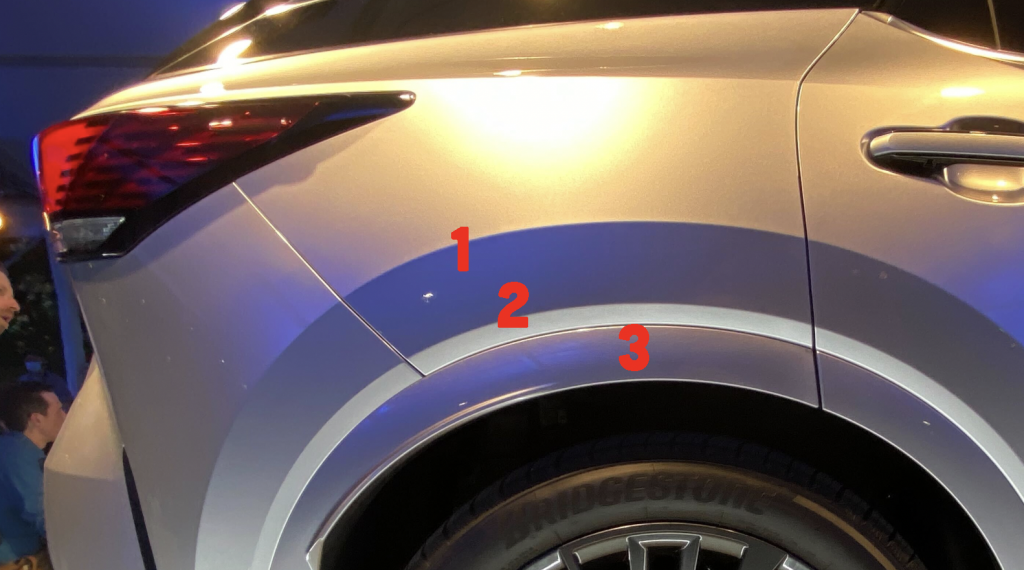 Not that the wheelarches needed much help in the busy department, since each is made up of three separate arcing shapes over that wheel, as you can see here. There’s a wide, flat intaglio arc shape, which then has a raised arc shape inside it, which in turn has another flat, wide arc over the wheel. There are at least three separate wheelarch shapes going on here, and I’m feeling like it’s a bit much. If the goal was to flare the fender out and then cut in with the arch, I’m not so sure it worked. 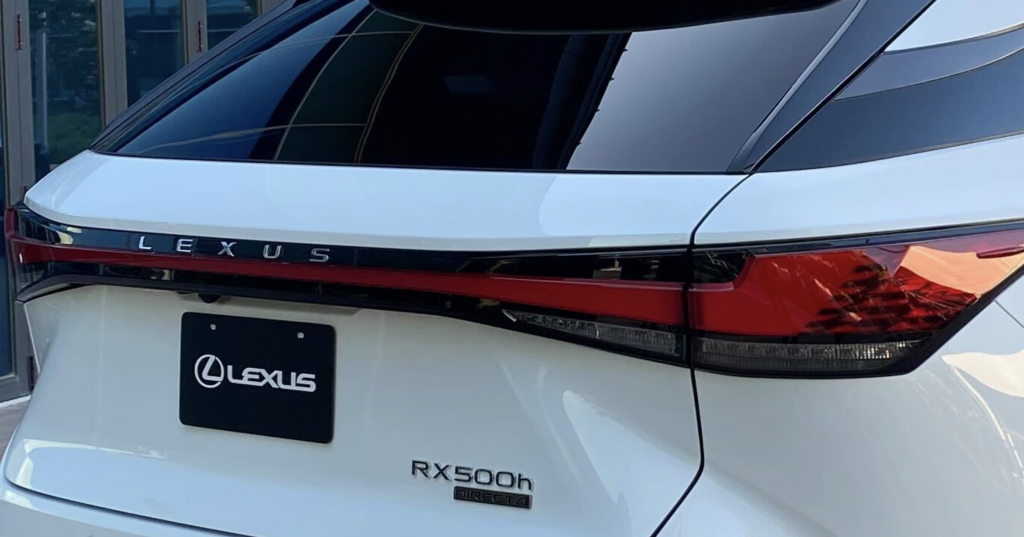 Well, of course  we’re going to talk about the taillights, or, really, taillight, as Lexus seems to be embracing the lone, full-width heckblended lamp design. The overall design references avian wings at the ends, but the overall shape feels like some flexible material that was stretched to nearly its limit, getting thin in the middle as a result. That puts some interesting tension into the design, and lets the lights act like a binding agent that pins and folds the bodywork into shape.

Also, I think the indicators are amber, and are in the outer lower clear-lens section, with the reverse lamps inset towards the middle.

On other modern Lexus (plural, you see) there’s more daring taillighty experimentation. Look at this: 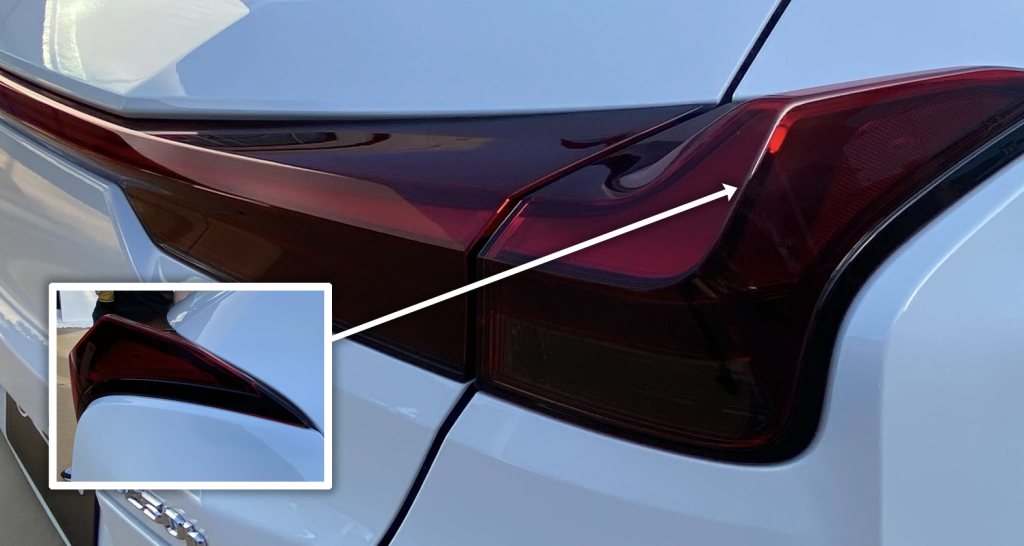 That’s very much a taillight-fin, as seen on the hard-to-Google Lexus UX. Bold stuff. 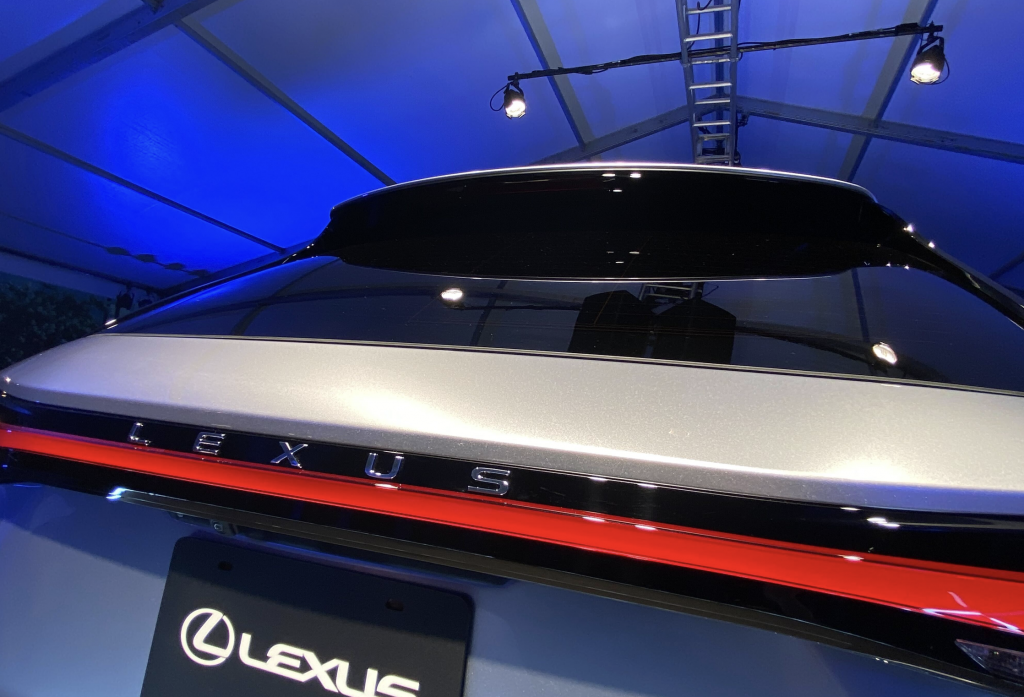 The RX must really be ashamed of its wiper, because it’s hidden very well, under that upper spoiler. Much cleaner solution than the usual mounting at the rear window base.

And Finally Whatever The Hell Is Going On Here

On the Lexus RZ, there’s these very peculiar little horns or ears that grow out of the back of the roof where you’d expect a small wing or something. They’re really quite strange in person, though they do feel sort of vaguely futuristic, like they have some specialized function, maybe re-polarizing the air or some made-up Star Trek shit. 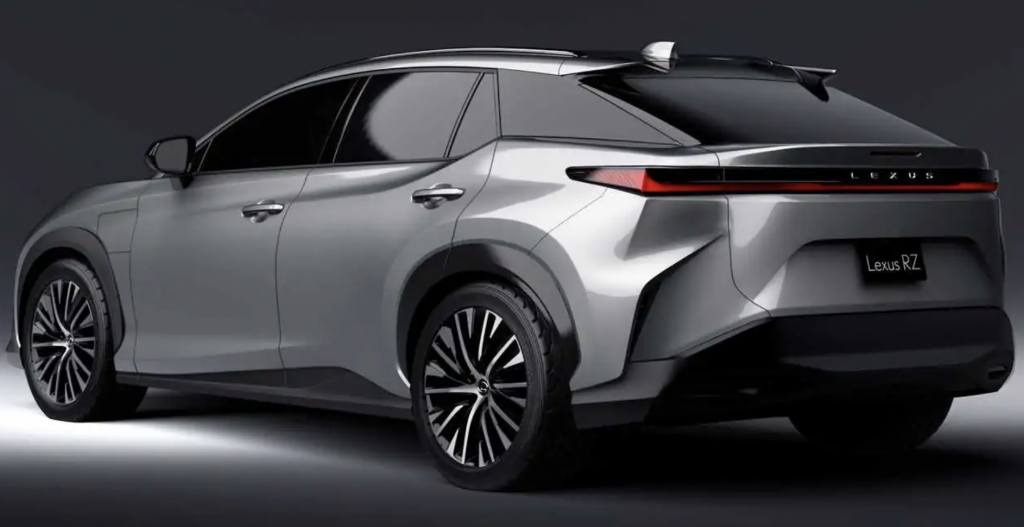 As I said before, modern Lexus design is not boring. I’m not sure I actually like it, though, because it’s also very busy and full of folds and flaps and orifices and wounds and creases and all of these things are just layered atop one another.

Look at that rear quarter on the car right above; you could compare it to Frank Ghery architecture or the result of a fender bender and I think you could be right on both counts.

I’m conflicted. But, I prefer that to being bored.

I'm a co-founder of the Autopian, the site you're on RIGHT NOW! I'm here to talk to you about taillights until you cry and beg me to stop, which I absolutely will not. Sorry. Hug? Also, David's friend.
Read All My Posts »
PrevPreviousHow I Would Design A Modern Cabover Pickup Truck: A Car Designer Sketches Your Ideas
NextWhy Some Cars Have A Bigger Turning Radius Than OthersNext