Mercury Monday: The Mercury Named For LA’s Junkyard Town And With A View Of Heaven

I think one of the greatest innovations of modern automotive design is also one of the simplest to understand, conceptually: stick a window in the roof. There are so many cars on sale today that offer just this, usually called something like a panoramic sunroof, and the difference it makes to the way it feels to be inside the car is dramatic. It’s almost at the point now where I feel like I’m spelunking when I’m in a car that lacks it. Sure, they’re heavy and there’s the possibility they’ll eventually leak, but I think they improve the overall experience of being in a car significantly. Also significant is the fact that these are older than you’d think, since Mercury had a version of this concept for sale way back in 1954, and it was called the Mercury Monterey/Montclair Sun Valley. So let’s talk about these notable Mercurys here on Mercury Monday.

When I think of “Sun Valley” now, I don’t think it has the same connotations that Mercury was going for back in the day. I think they were hoping to evoke ideas of sunny, effortless elegance, but my experiences with Sun Valley from when I lived in Los Angeles are those of sunny, effortless junkyard exploring. 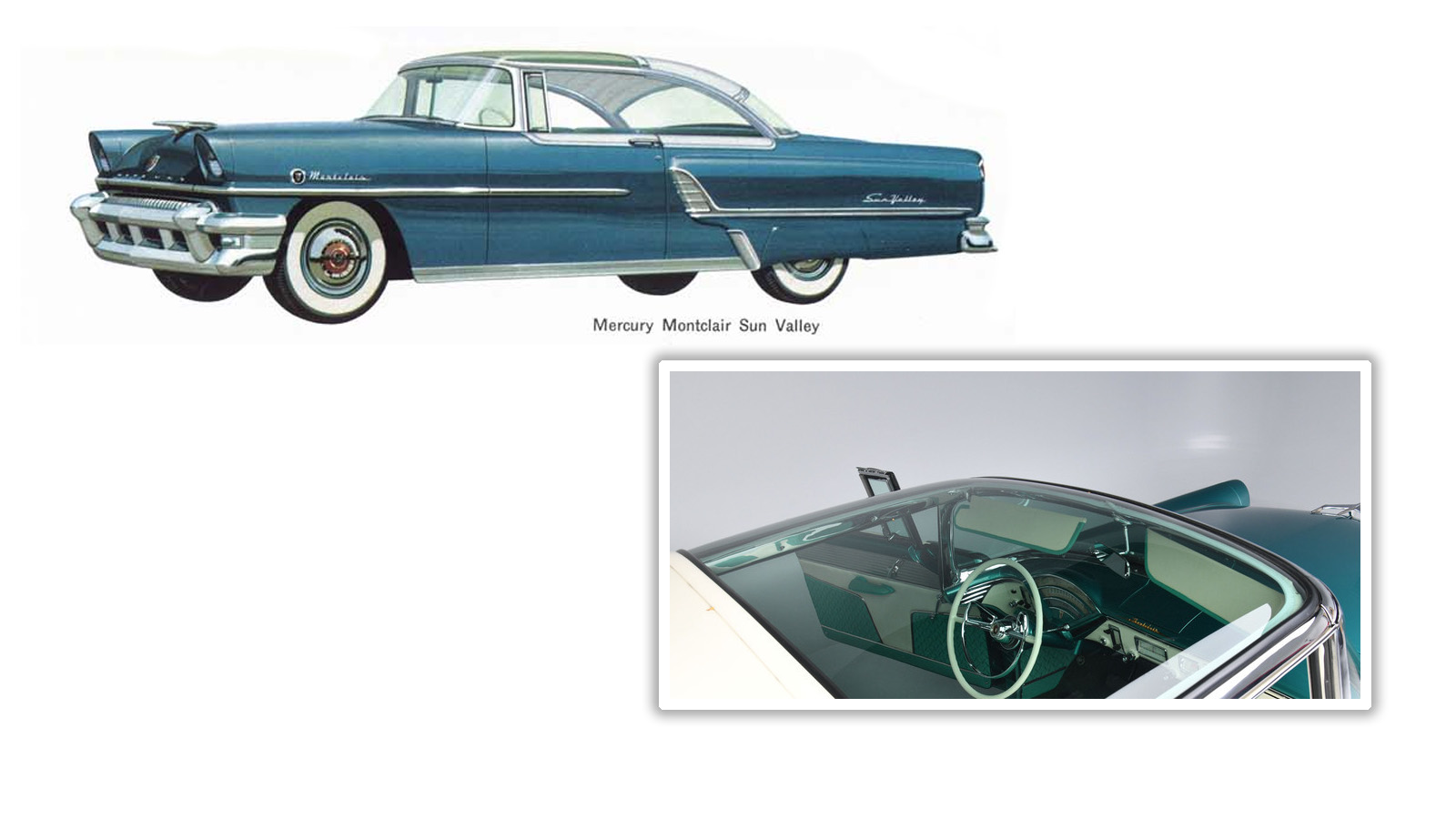 I actually love Sun Valley, but let’s be honest here: it’s mostly a collection of junkyards (including legendary spots like Apex Surplus) and Mexican food places, and while that sounds like a suburb of Heaven to me, I suspect Mercury was going for something, you know, classier. That’s because the Monterey/Montclair Sun Valley was a classy-ass car, absolutely saturated in the wild, perhaps unhinged optimism of mid ’50s America. 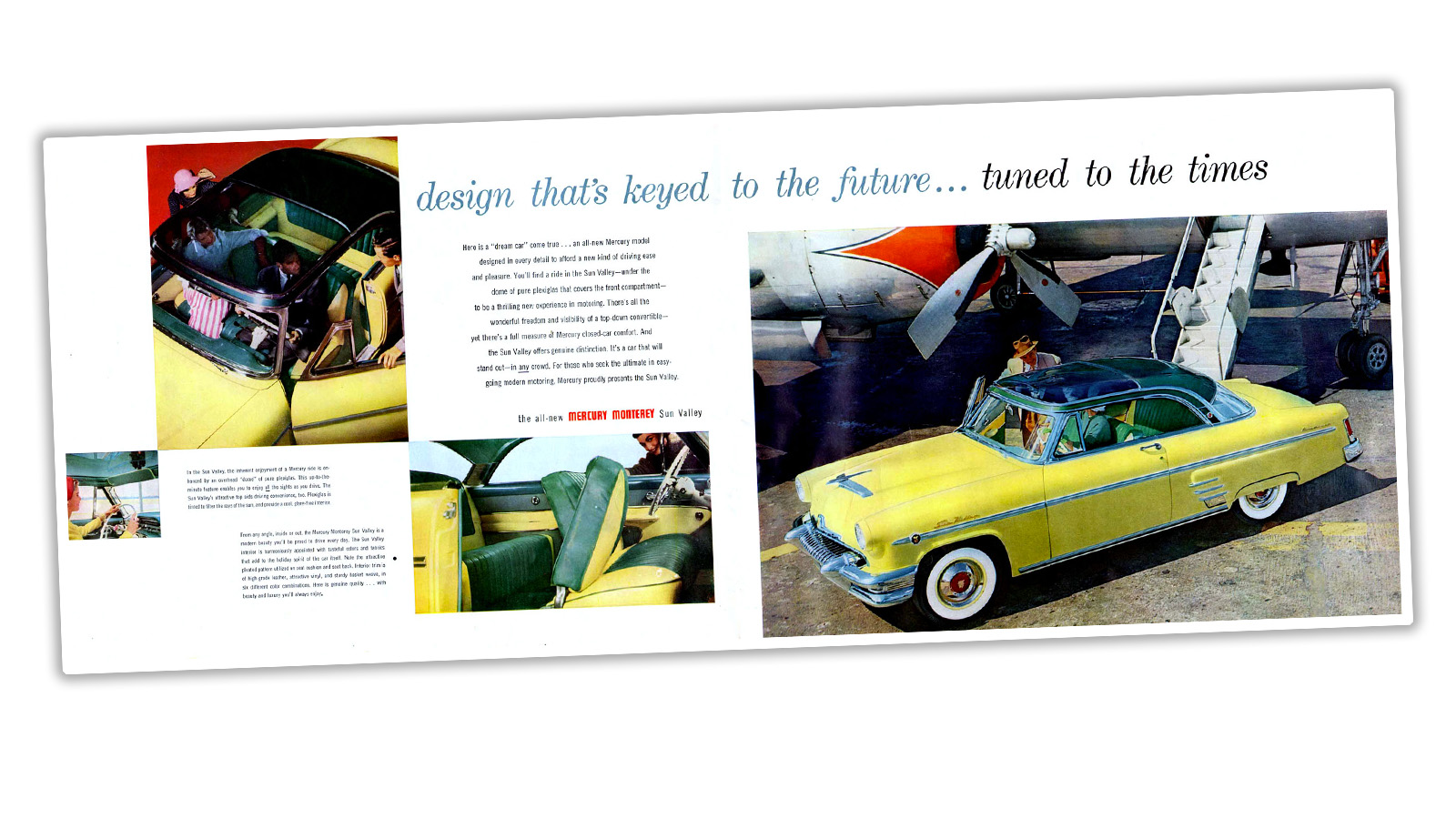 That’s all it is, a chunk of green plexi over your head, but what a difference that chunk of plastic makes. Used on a hardtop design with no B-pillars, the overall effect would be incredibly airy and open, feeling like a convertible, albeit one you’re driving on a planet with an atmosphere high in emeraldium, an element I made up that turns skies green. Maybe copper would do that? What am I, a chemist?

Here’s a nice video walkaround of a 1954 Sun Valley, so you can feel what this thing was like:

The 1955 version of the Sun Valley was now part of the more upscale Montclair trim (which also upgraded the 292 V8 engine to a 312 cubic inch V8 making an alleged 225 horsepower), and the whole body design was changed for 1955, giving the car even more of a concept-car feel, with a true wrap-around windshield, a slimmer, more elegant and lithe roofline, hooded headlamps, fully skirted wheels, all of that mid-’50s jet-age candy. 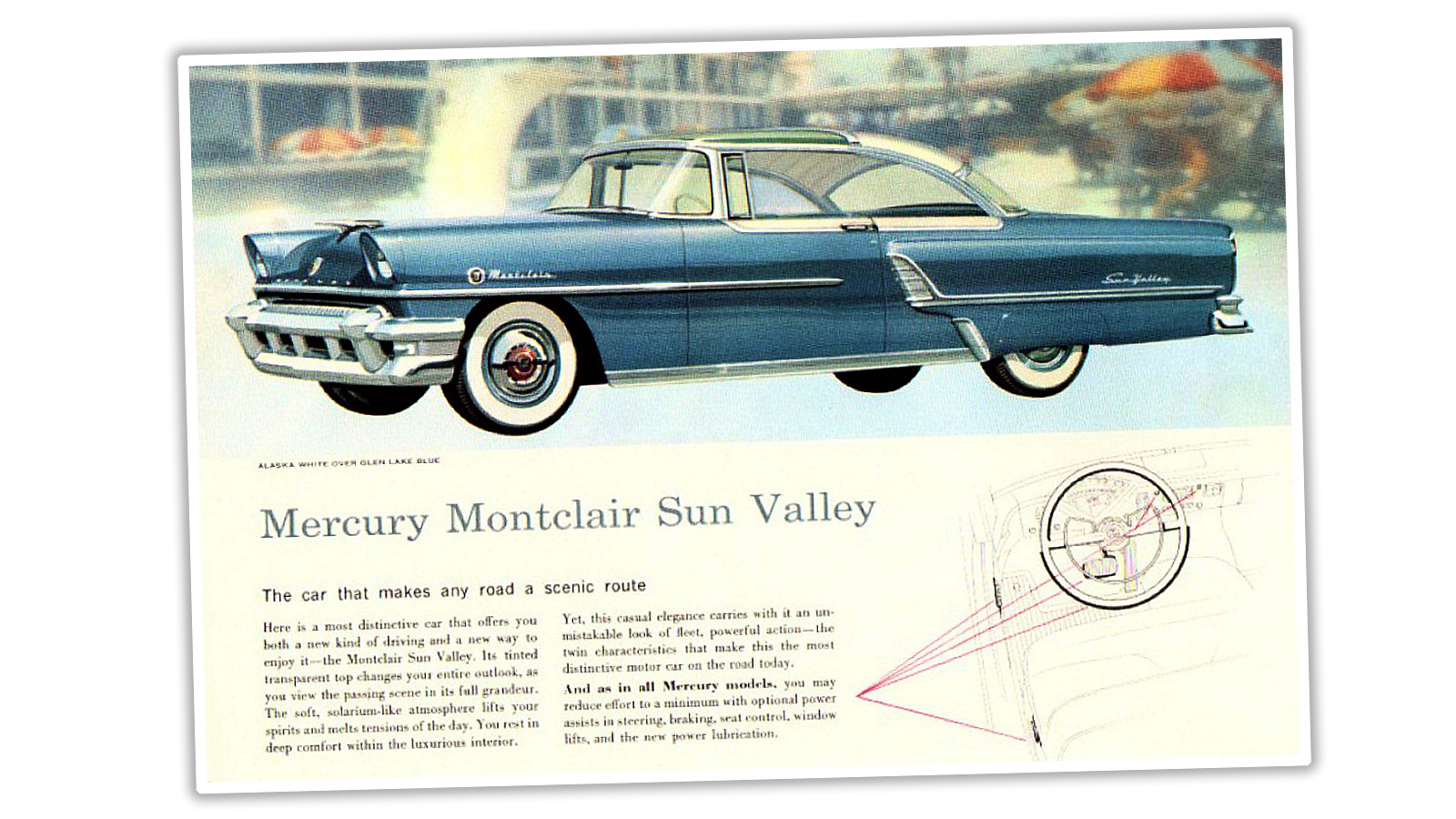 Look how it’s described in that ad copy: “The soft, solarium-like atmosphere lifts your spirits and melts tensions of the day.” The verb in that last bit will become significant, as you’ll see.

The Sun Valley variant sold an impressive 9,761 cars in 1954, as it was a touch cheaper than the actual convertible, but with the added benefit of never getting rained on, using principles that can be demonstrated with a common household umbrella. But in 1955, sales dropped down to 1,787, which is a pretty precipitous fall, one that I think can be explained by telling you one more fact about Mercurys of this era: air-conditioning was an extremely rare factory option to get in 1955, with barely over one percent of cars having it, and wasn’t really more readily available until 1956.

What this means is that nearly everyone who bought a Sun Valley ended up with a sleek-looking concept-car like spaceship of a car that must have felt like being trapped in a chlorophyll-saturated greenhouse. Unlike modern panoramic roofs that have all sorts of advanced UV-coating, the old plexi roof just had green tint, and you were still very able to get cooked under there, no problem.

I think to really appreciate these Mercurys, you have to understand them in context: the idea of a vast, overhead view while being protected from the weather – a transparent roof – was still pretty much just concept car indulgence, like on the 1954 Chrysler La Comtesse: 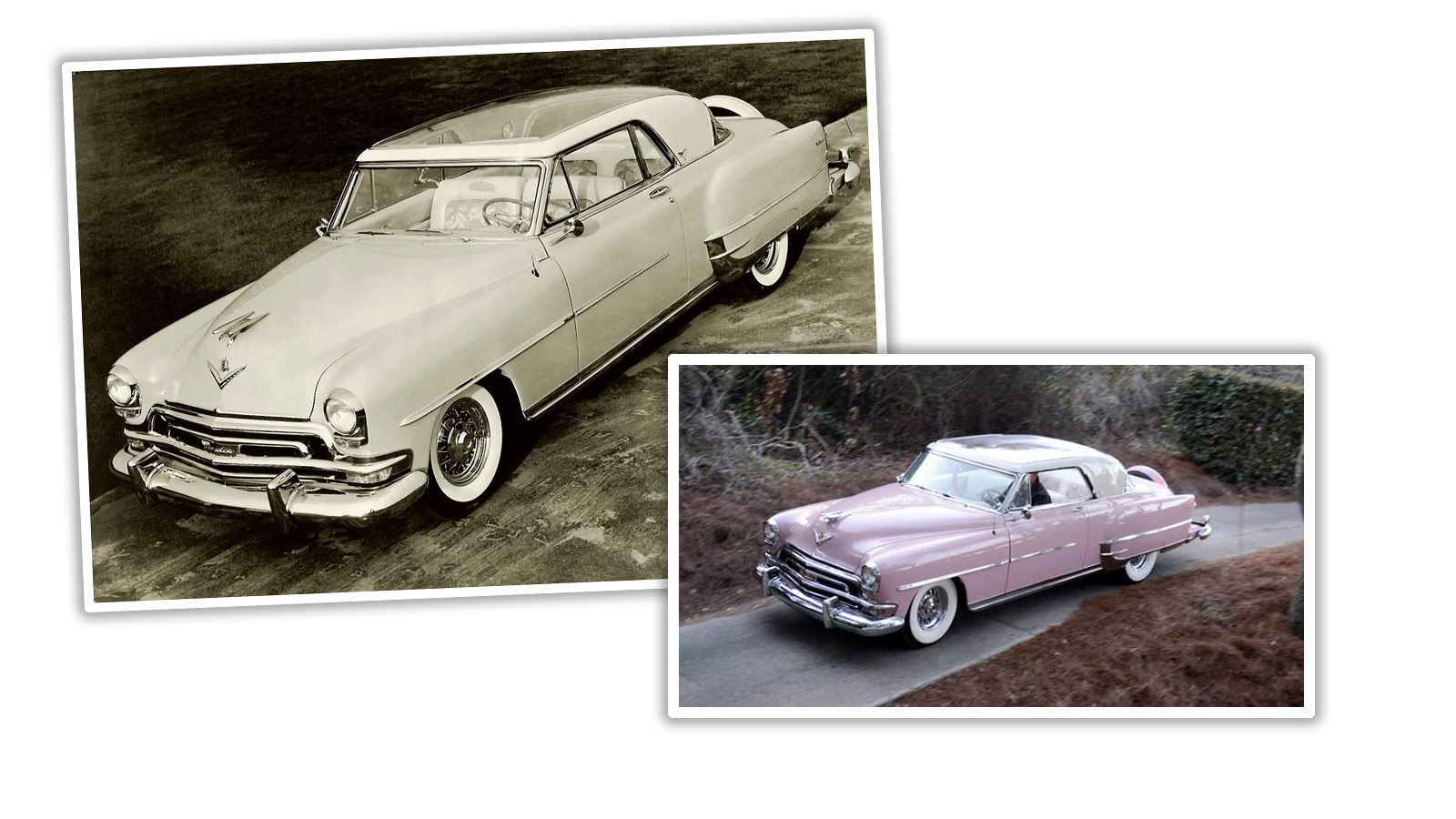 …and then here comes the Mercury Sun Valley (well, and the Ford version, the Fairlane Crown Victoria Skyliner) offering everyday, regular people the same glorious transparent roofs, just like a show car! You can absolutely see how thrilled people would have been to, say, buy one in the glorious chromatic explosion of autumn, spend a few delighted months seeing the leaves change color and fall, thrilling to watching a thunderstorm from the cozy confines of their Mercury, delighting as the raindrops spawn concentric circles of light, making dazzling geometric reflections on faces and dashboards, and only getting disillusioned in mid-May when they have their first encounter with heatstroke. 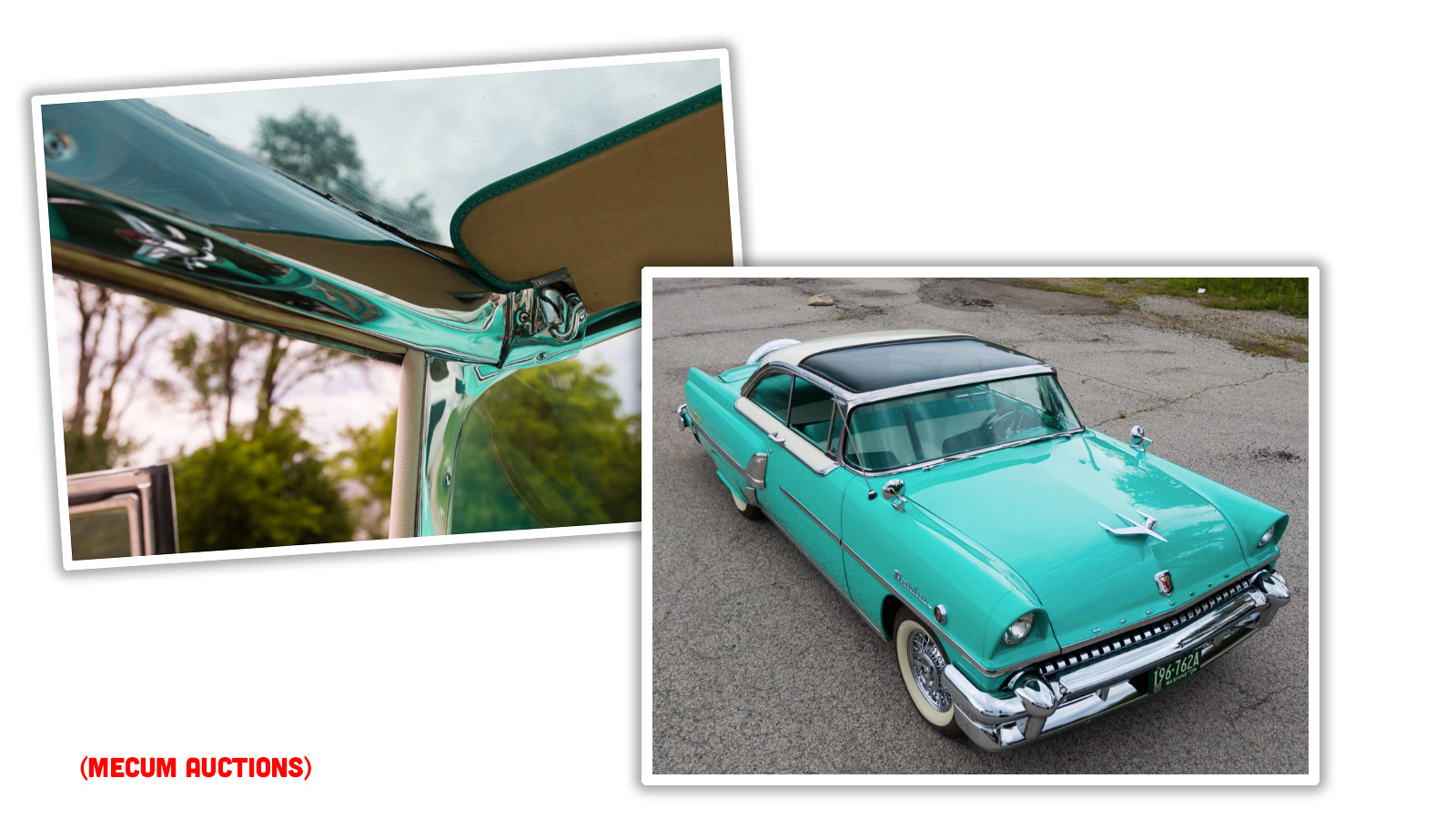 Sure, the Sun Valley was a sort of gimmick, and a gimmick that didn’t really have the necessary technological infrastructure (cheap and readily available air conditioning) to actually be successful. But, even so, I think the value of that gimmick has been proven today, with the incredibly wide acceptance of panoramic sunroofs, because sometimes all an automotive innovation needs to do is make the people inside the car feel better, in some, even ineffable way.

I think a big-ass window over your head can do precisely that, and this Mercury was a failed pioneer of just that, being almost literally like Icarus, being defeated by the sun.

(thanks to John F. Katz for the suggestion!)

I'm a co-founder of the Autopian, the site you're on RIGHT NOW! I'm here to talk to you about taillights until you cry and beg me to stop, which I absolutely will not. Sorry. Hug? Also, David's friend.
Read All My Posts »
PrevPreviousHow To Add $79,220 Worth Of Options To A $57,500 Porsche Macan
NextStop What You’re Doing And Drool Over This 444 HP Volkswagen Touareg W12 For Sale In CanadaNext