No One Really Uses Their Paddle Shifters: Prove Me Wrong 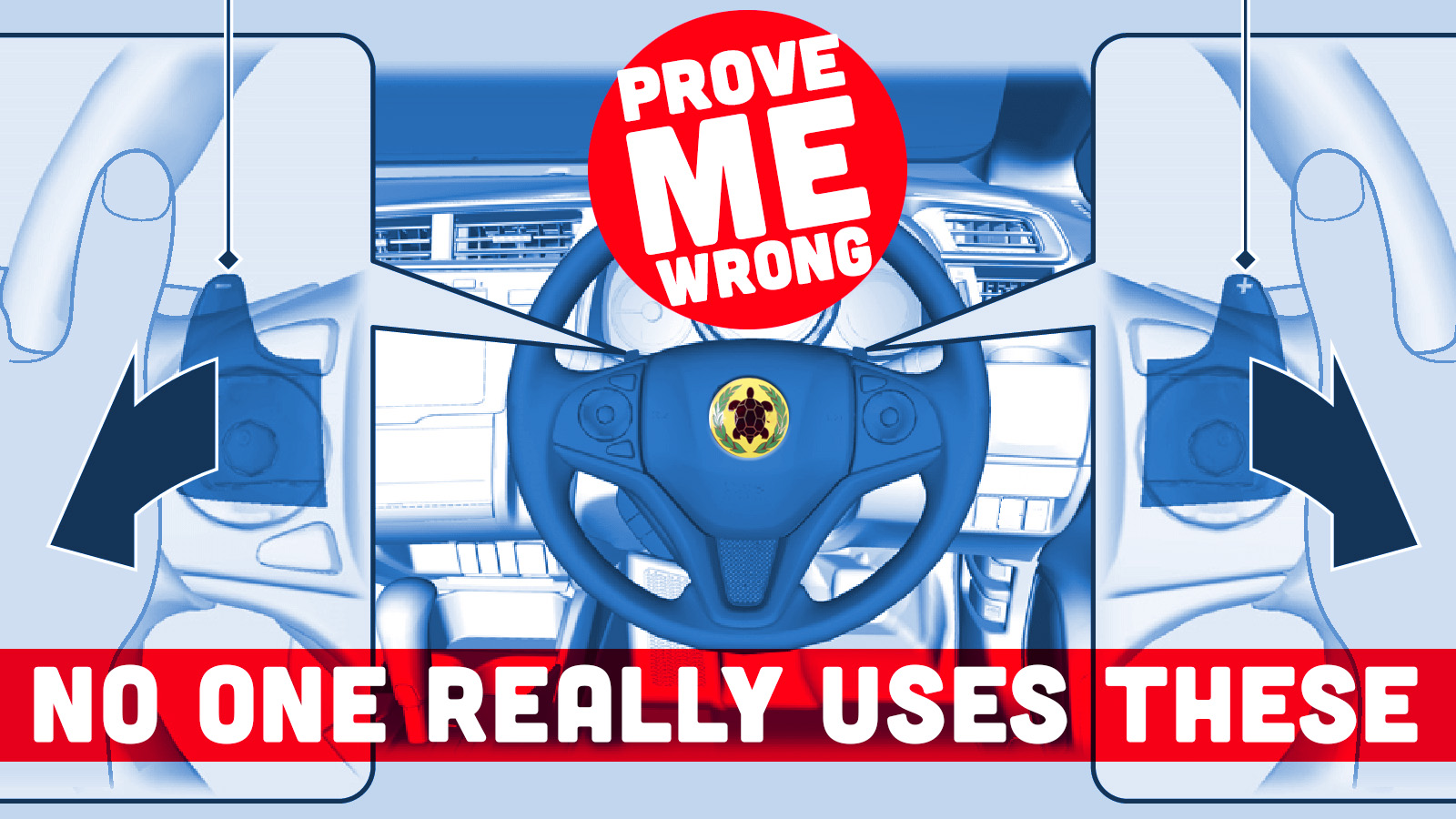 I know I’m supposed to be off today for Yom Kippur, but it’s technically the night before, so I think if nobody rats me out to any clergypeople or their authorized agents, then I’m probably okay. And that’s good, because we need to do another episode of Prove Me Wrong! As you know, this is important. This time, we need to talk about paddle shifters, commonly found on a wide variety of vehicles you can buy today. They’ve been around for a while now; in fact, I’d say they may be the most common and yet least-used controls in a car, because, let’s be honest: aside from playing around with them every now and then, nobody really uses these things.

Now, I’m not talking about genuine racing cars with transmissions that will only shift with paddles – I mean the sort of paddle shifters that actuate semi-manual gear selection on otherwise automatic transmissions in mainstream, mass-market passenger cars. It’s quite likely you, the devastatingly sexy person reading this right now on the deck of your pleasure-helicopter, have a car with such paddles.

My theory is that people with cars that have optional-use paddle shifters use them for about, oh, 12 minutes per month in the first few months they own the car, and then after the initial novelty has worn off, they forget about them. Maybe, maybe, your fingers will graze them on a boring drive and you’ll remember they exist, and you’ll have fun for a few minutes downshifting and getting the car to rev really high and feeling that pull of torque, and then you’ll have to pay attention to your next turn or whatever and you’ll forget about those paddles for months. Maybe years.

On just about everything modern with paddle shifters, the automatic transmission left to handle the job itself shifts better than you can, for acceleration, for efficiency, for whatever. The act of paddle shifting isn’t nearly as satisfying as using an genuine manual transmission anyway, and people learn that pretty quickly.

So what’s the point?

[Editor’s Note: On vehicles with good transmissions that do what you want them to, I tend to agree with JT, here: paddles don’t see much use. The ZF eight-speed auto that’s seemingly in every car these days usually puts the driver in the gear they want if the transmission is properly calibrated. I think people are more likely to click a “sport mode” button that ensures the transmission behaves a certain way than they are to use the paddles. Though, on transmissions that don’t behave how you want them to, a paddle might help you, for example, hold a lower gear on a steep incline/decline.

I think, on a fun sports car like an E92 M3, paddles can be fun, but on most other cars, they tend to be forgotten, as JT argues here. Center tunnel-mounted slap-stick “manumatic” shifters, though (you know, the shifters that you push or pull to change gears)? I think those are even less frequently used — again, unless the transmission isn’t doing what it needs to do, like downshifting up a grade or holding that gear. -DT]

Maybe you’ll argue with me. Maybe you’ll say I just don’t understand the pure, visceral joy one gets from those flappy paddles. But I kinda doubt it. Is there anyone, anywhere who routinely, consistently, uses paddle shifters exclusively on their daily drives? I think you’re more likely to find a Corvair-driving toucan with a fondness for the large-scale works of Abstract Expressionist Franz Kline.

I’m not even going to say that paddle shifters are dumb or useless or anything like that. I don’t need to. Because it just doesn’t matter if they are or not, because nobody ever really uses them enough to care.

I'm a co-founder of the Autopian, the site you're on RIGHT NOW! I'm here to talk to you about taillights until you cry and beg me to stop, which I absolutely will not. Sorry. Hug? Also, David's friend.
Read All My Posts »
PrevPreviousThe Hyundai Ioniq 6 Will Pack Some Seriously Bladder-Busting EV Range
NextLet’s Remember The Hilariously Half-Assed Engineering Solution Ford Devised To Compete With The Chrysler Minivan’s Dual Sliding DoorsNext