Every so often, a new car gets blindsided by the competition. Traditionally, manufacturers have two options when this happens: They can spend proper money and resources on an emergency redesign to even the playing field or they can just keep on going and lose a few sales. However, Ford once proved that there is a third option: hedge your bets with a half-assed redesign. 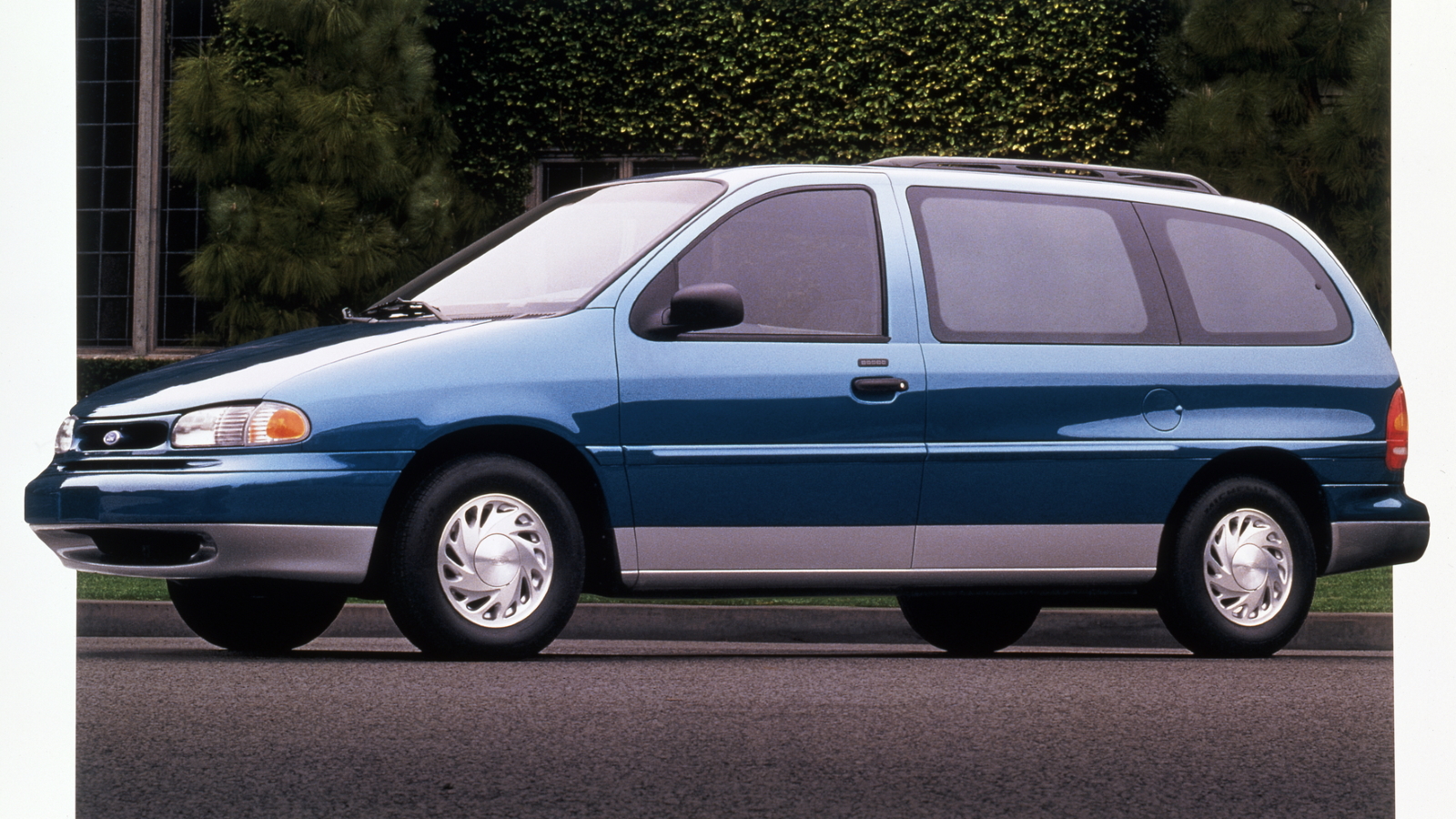 Ford released the first-generation Windstar for 1995 and at the time, minivans with left sliding doors were a bit of an anomaly. Even the first-generation Mazda MPV with conventionally-hinged doors didn’t have a rear door on the driver’s side while the Windstar was in development. Ford, presumably to keep material and development costs lean, decided to stick with the status quo and release the Windstar with just one sliding door. That was all well and good except for one thing: Chrysler was the minivan king and it was about to drop a bombshell.

If you go to war against a king, you better pull out every stop. Likewise, if you wear a king hat and live in a king house, you best be constantly innovating, a bit like Chrysler did with the rounder, HS-generation minivans that debuted for the 1996 model year. Not only did these vans cost more to develop than any prior Chrysler product, they came packed with radical jellybean styling and a whole host of innovations. Easy-Out Roller Seats with inboard stanchions for reduced weight, dual-zone climate control, and the biggest game-changer of them all, an available sliding door on the driver’s side of the van.

Think about how many jellybean Chrysler minivans you’ve seen without a driver’s-side sliding door. If you only recall seeing a handful, there’s a good reason for that. During the van’s development, Chrysler asked minivan owners if they’d pay an extra $300 for a driver’s-side rear door. A full 85 percent of owners surveyed said yes. Ford was in trouble, and rather than completely redesign its minivan to have two sliding doors, Dearborn half-assed a solution so incredibly stupid, it’s a wonder it was approved at all.

Officially called the Family Entry System, a longer driver’s door combined with a coupe-style forward-tilting driver’s seat to theoretically enhance driver’s-side rear seat access while effectively turning the Windstar into a three-row Hyundai Veloster. There are just a few small problems here. The first is that it appears the forward-tilting driver’s seat was optional on lower Windstar trims, yet the longer door was standard. Talk about nickel-and-diming customers. The second is that a bigger door presents some minor issues. It couldn’t open at as wide of an angle a standard door and was a little bit heavier than the door on an early Windstar, meaning it could be a pain for those constrained to tight parking spaces.

In addition, think of all the headaches this must’ve caused up and down the supply chain. New stampings require new tooling, new glass requires glass repair shops to carry glazing for both earlier and later models, parts catalogs must be updated, new seats need to be certified, it’s just an immense amount of work for everyone involved. Best of all, it doesn’t just stop with assembly and repair shops. Once Windstars became thoroughly clapped-out, imagine the hassle of trying to find a replacement driver’s door at a self-service junkyard. It would just be the biggest smack in the face.

Thankfully, the Family Entry System was a very short-lived feature. It made its first appearance in early 1997 for the 1998 model year and in the autumn of 1998, Ford introduced a redesigned Windstar that featured sliding doors on both sides of the minivan. Needless to say, having dual sliding doors has been the minivan industry standard ever since. Still, it makes us wonder why Ford went to the vast expense of a longer driver’s door when it didn’t really solve much.

Thomas is a Nu Rave-blaring, heel-toe downshifting, maple syrup-swilling, chassis-geeking, junkyard parts-hauling, floppy-haired scenester who's been writing about cars since college. His current ride is a 2006 BMW 325i with the six-speed manual gearbox. Instagram: @thomas.hundal Twitter: @thomashundal
Read All My Posts »
PrevPreviousNo One Really Uses Their Paddle Shifters: Prove Me Wrong
NextI Took A Close Look At Some Lightweight Off-Road Campers That Actually Look Badass. Here’s What I SawNext