I Took A Close Look At Some Lightweight Off-Road Campers That Actually Look Badass. Here’s What I Saw

Last week, I toured the RV Open House in Indiana to check out the latest and greatest in RVs. Among the hundreds of square boxes on wheels were some great ideas. We’ve already talked about Airstream’s electric-powered trailer and an adorable fiberglass trailer from the UK. Today, I have a relatively new camper from Canada, and this one is for the off-roading crowd. Mission Overland wants to sell you a lightweight off-road camper where durability and sex appeal are among its highlights.

Americans have an insatiable lust for camping right now. As we’ve noted before, the RV industry has been posting record production volumes as people take to the open road for vacations. The industry has also noticed the popularity of off-road camper builds, and as a result you can buy all sorts of trailers with lift kits and all-terrain tires. However, as I’ve noticed with my own eyes, these are often just regular campers that merely look rugged. Here’s a look under a lifted Little Guy teardrop camper:

Underneath, they’re the same as the regular street version. One wrong move, and you’re dumping your black tank out on a trail.

Thankfully, you can buy campers that are designed around the idea that you’re going to bash them off-road. Earlier this year, I got to sleep in a Taxa Outdoors Mantis Overland at the King of the Hammers and it was an unforgettable experience: 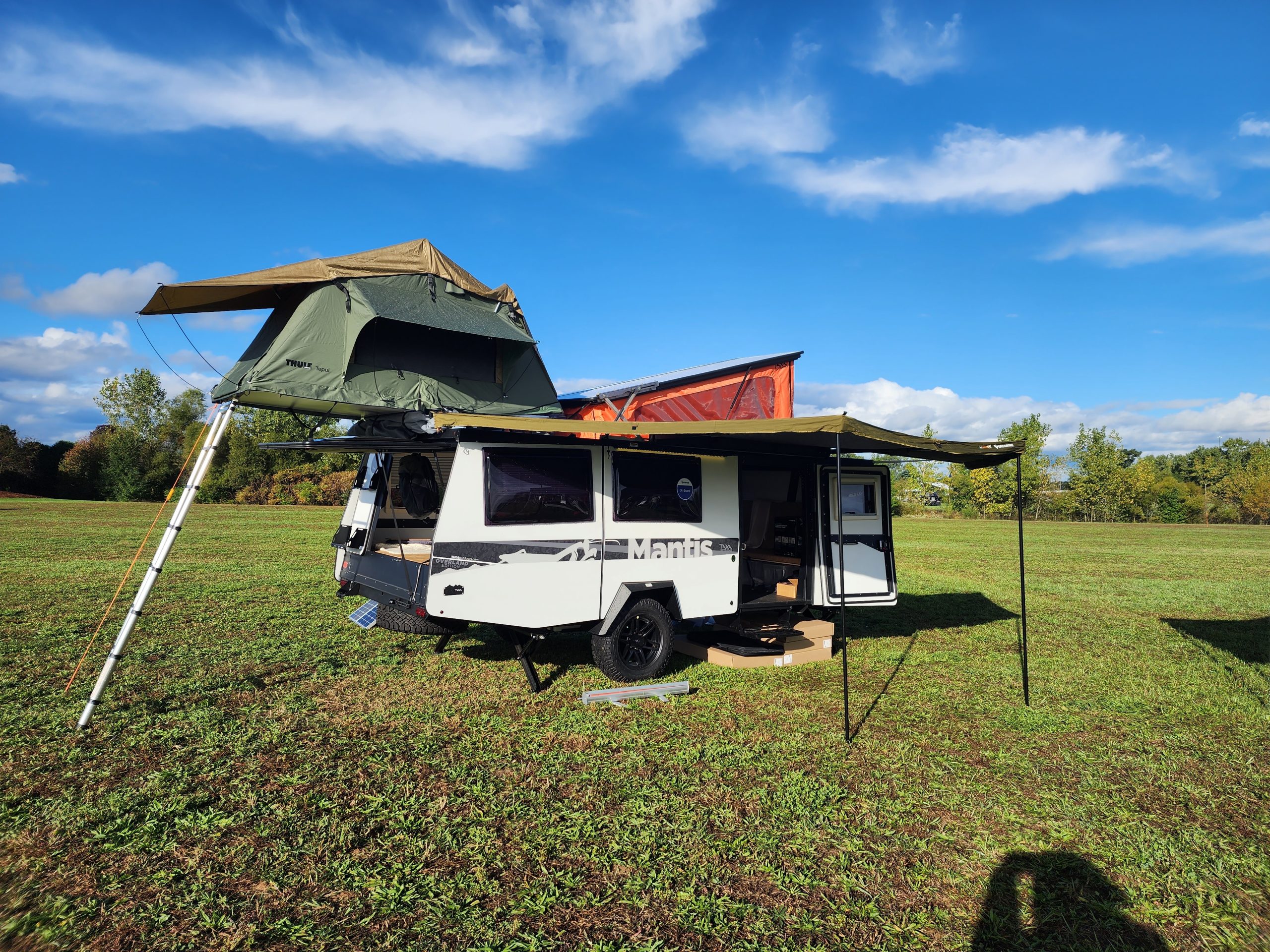 Taxa Outdoors, a company founded by a former senior architect for the NASA Habitability Design Center, sells campers that are stripped of everything but the basics. Forget about slides, washers and dryers, or chandeliers. A Taxa is so aggressively bare-bones that you store stuff in milk crates held in place with bungee cords.

In a Taxa Mantis, you still get a furnace, air-conditioner, kitchen, and even a bathroom, but all of that stuff is just put there without any regard for beauty. At the Open House I found Taxa’s direct competitor, Canada-based Mission Overland, and it has some ideas on how to improve on Taxa’s designs.

What Is Mission Overland? 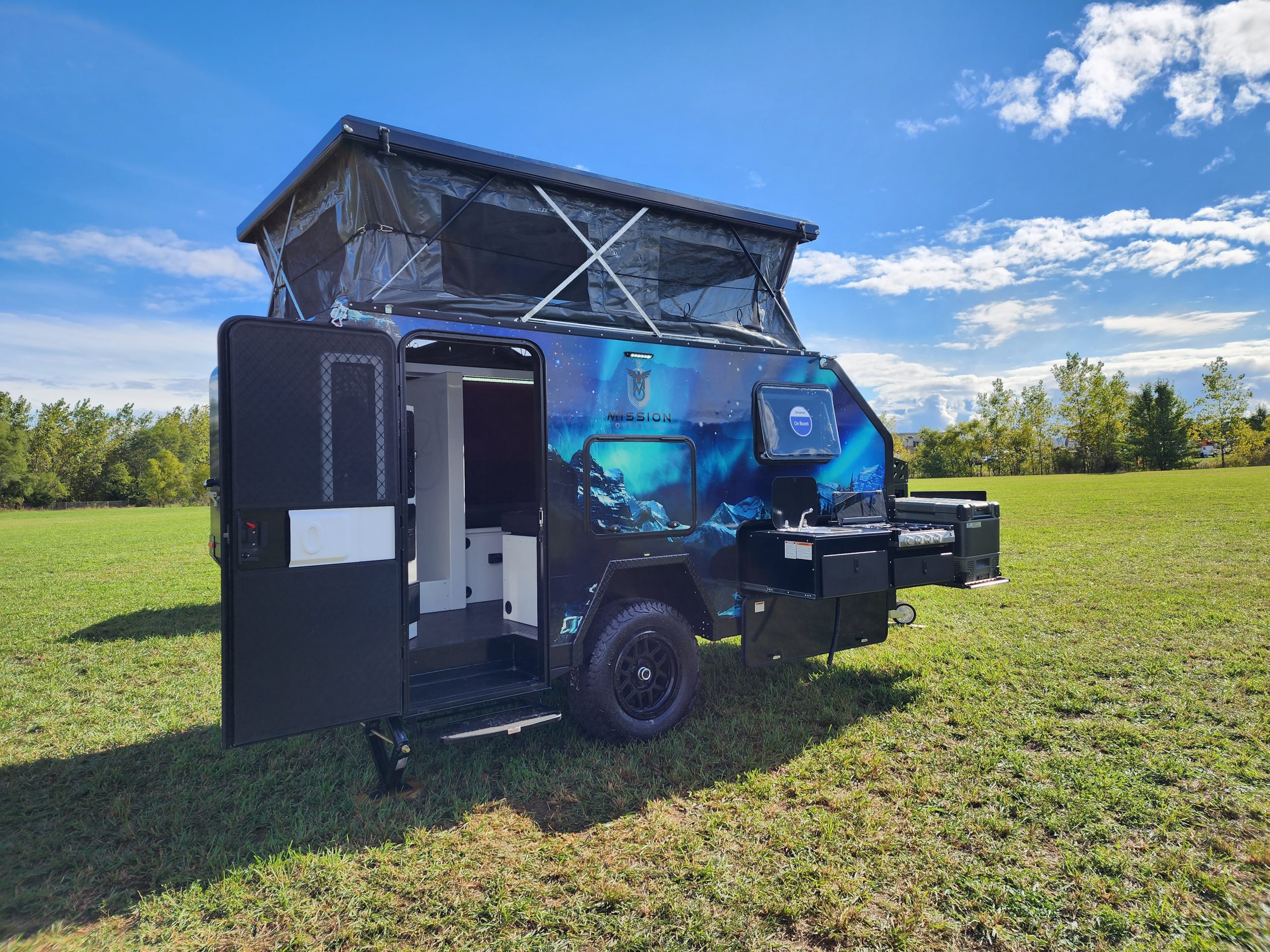 I spoke with Aaron Boring, President of Mission Overland. He told me that this is a startup in the classic sense. It was started by two guys who wanted to continue having adventures after having children.

Boring owns 50 percent of the company and to him, part of what sets Mission Overland apart is that the company’s trailers are built by people who adventure, for people who adventure. Boring tells me that while the company is new, its people have more than 15 years of experience building campers. He also worked for Taxa Outdoors before deciding to create his own version of the same idea. 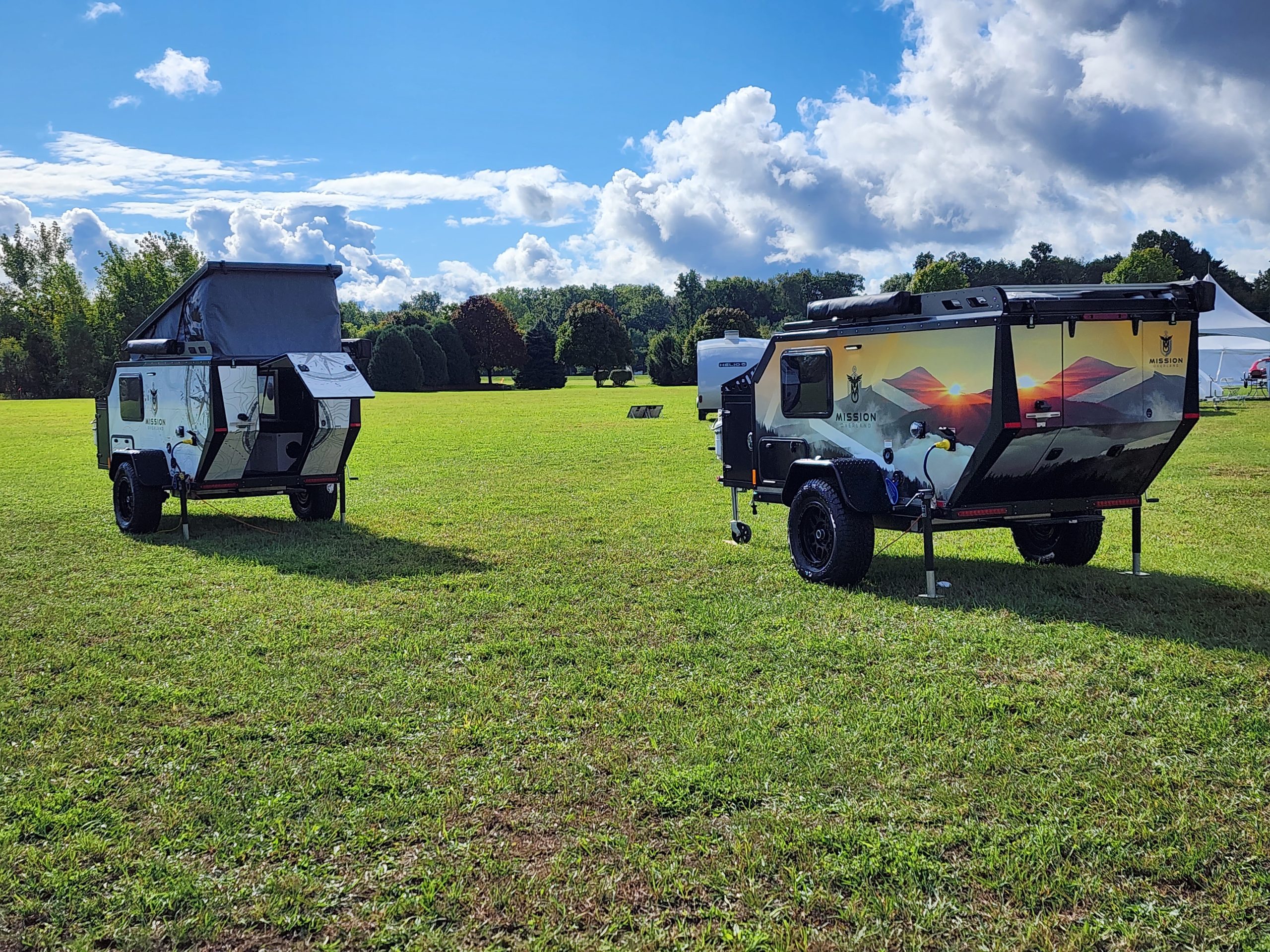 Taxa Outdoors and Mission Overland do a few things similarly. Both camper companies believe that lightweight, rugged campers are the best way to camp off-road. Both camper companies have minimalist designs meant to keep you connected to the outdoors. And both campers are designed to last a long time. Boring tells me that these types of campers are great because the low weight and tiny size means that you aren’t trying to drag a luxury hotel room through the woods.

Also somewhat similar are the walls. Mission Overland makes its walls out of two 16-gauge aluminum panels with high density foam insulation sandwiched in. It adds up to 1.5-inch thick walls. Here’s what a sample of it looks like: 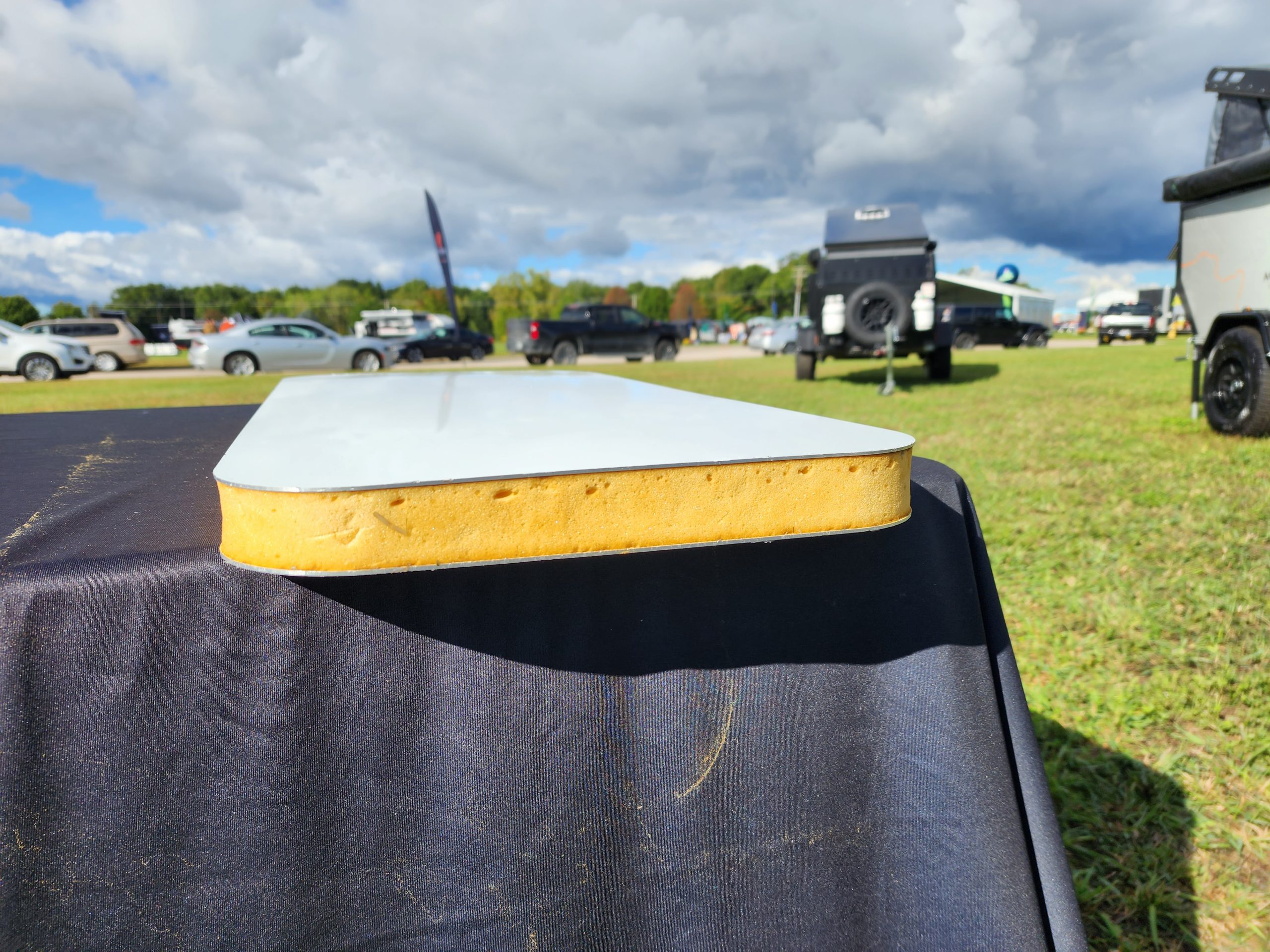 Taxa’s trailers sport walls of aluminum composite panels with a resin-based coating said to able to withstand serious torture. Along with sunlight and UV exposure resistance the coating also offers some resistance to fire and abrasion. That’s bonded to aluminum alloy panels and includes a two-pound closed cell foam core. 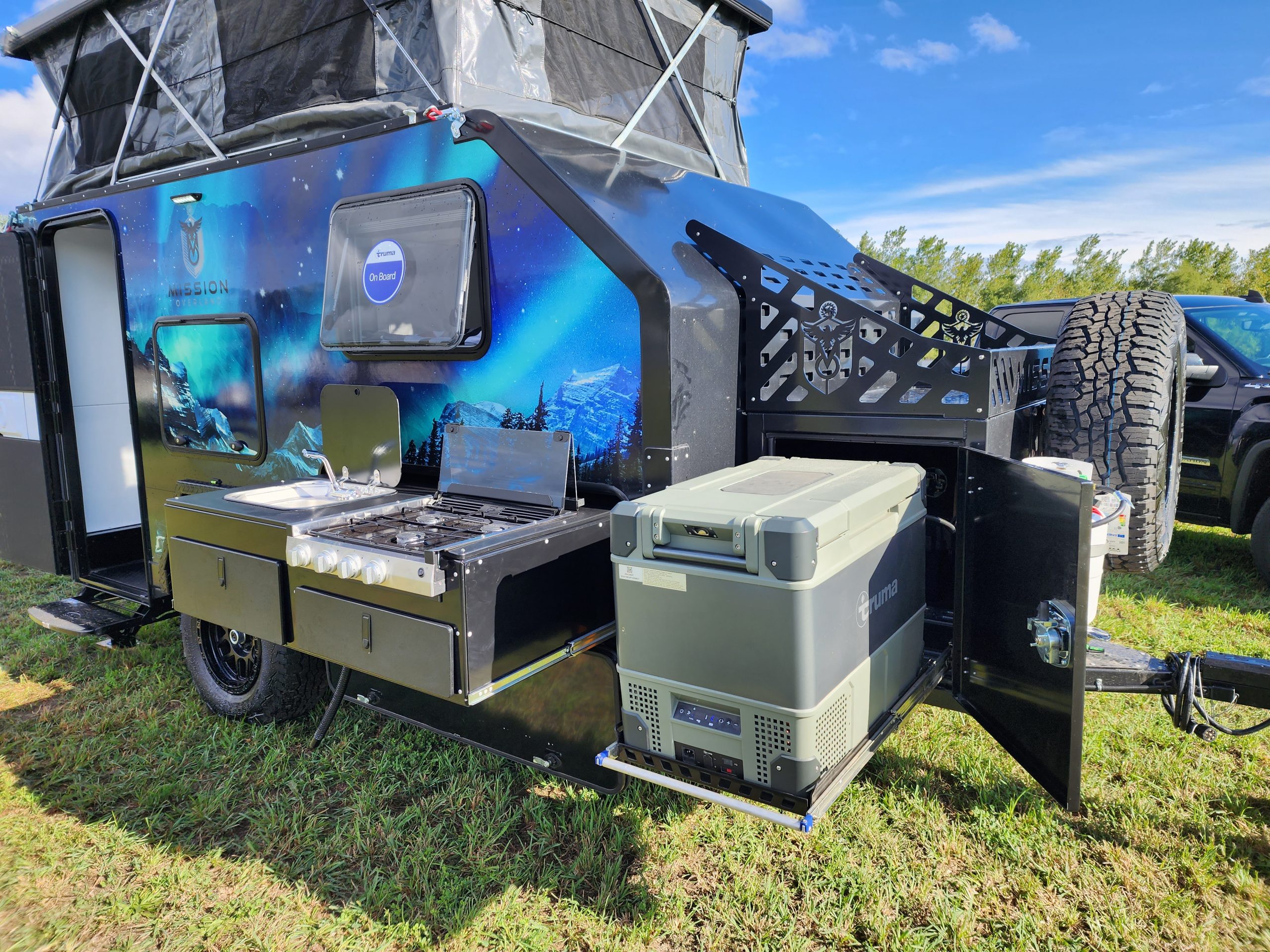 The two camper companies follow a similar formula, but with different methods to achieve it. The most obvious difference to me was the arrangement for cooking in larger trailers. In a Taxa Cricket or Mantis, your stove, sink, and cooler are inside of the camper. But in a Mission Overland Summit or Approach, the cooking unit is outside, mounted to drawers. Boring tells me that the reason that you buy a trailer like this is to be outdoors, so why not cook outside, too?

I do think that these slide-out kitchens are pretty neat. On a good day, you can cook your meals in full view of a lake, mountains, or wherever you set your stabilizers down. I like that. Here’s a Taxa kitchen, for comparison: 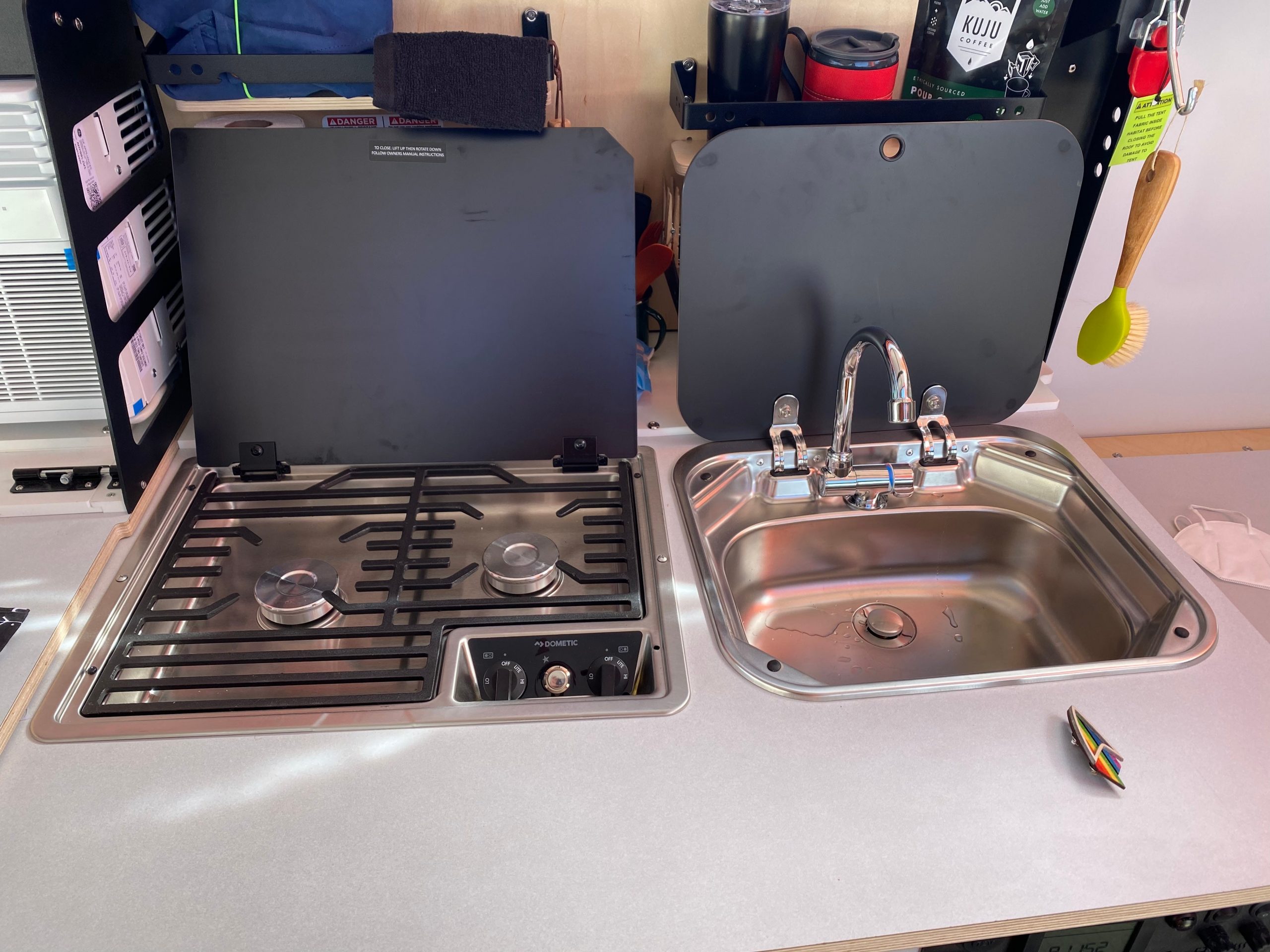 However, it’s those bad days that hold me back from truly embracing this style of kitchen. At night at King of the Hammers, it sometimes got into 30 degree temps. I wouldn’t want to go outside and cook in temps that low. And I’ve experienced how miserable it is to cook while it’s raining or snowing. But if you camp in fair weather, an outdoor-only kitchen probably isn’t a problem.

Another difference between the two brands is interior design.

In a Taxa, it’s all super simple. Your lighting consists of LED strips strung out over the ceiling. Your counters are high pressure laminate with baltic birch for cabinets. And as I said before, your storage solutions are metal caddies with milk crates in them. Check it out:

I dig this kind of interior because it seems like you could fix things that break with duct tape and zip ties if you needed to.

Mission Overland’s approach uses a lot of metal. Your storage cubbies are metal, with plastic doors. Your benches are metal, too. You don’t really get any form of countertop space, but you do get a wood table.

The cushions are also pretty thick, which felt great. That said, Mission Overland’s trailers felt a little less “open” than a Taxa.

Taxa’s campers are designed to have a lot of windows that swing open. They also have huge doors that also swing open. Together, they really do make you feel like you’re still outside as you relax on your bed. Here’s the Mantis that I slept in, exploded open: 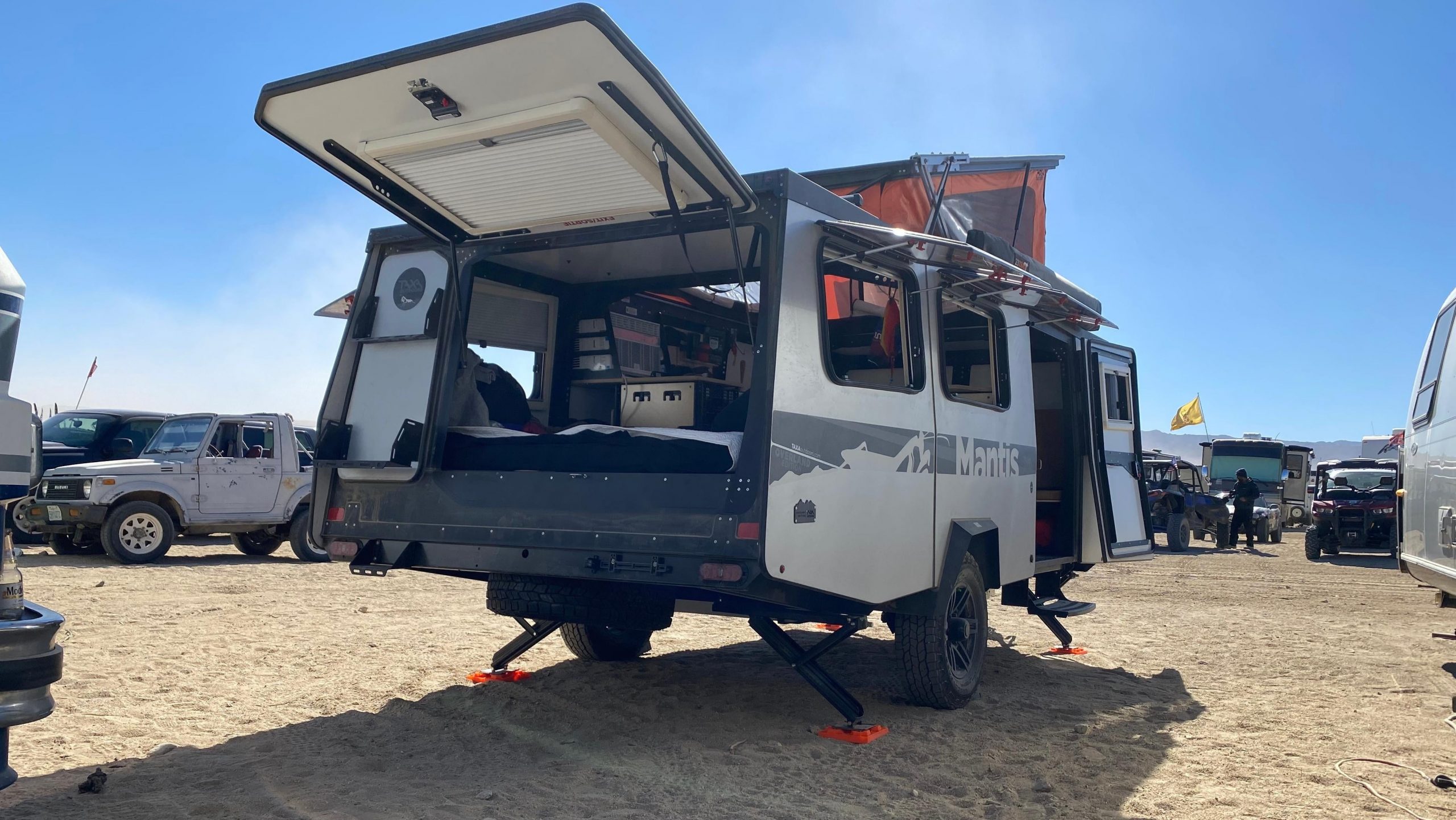 Mission Overland has this going on, too, but with fewer windows and a smaller door, the feeling isn’t the same. Perhaps the dark colors also influence the more closed-in vibe. 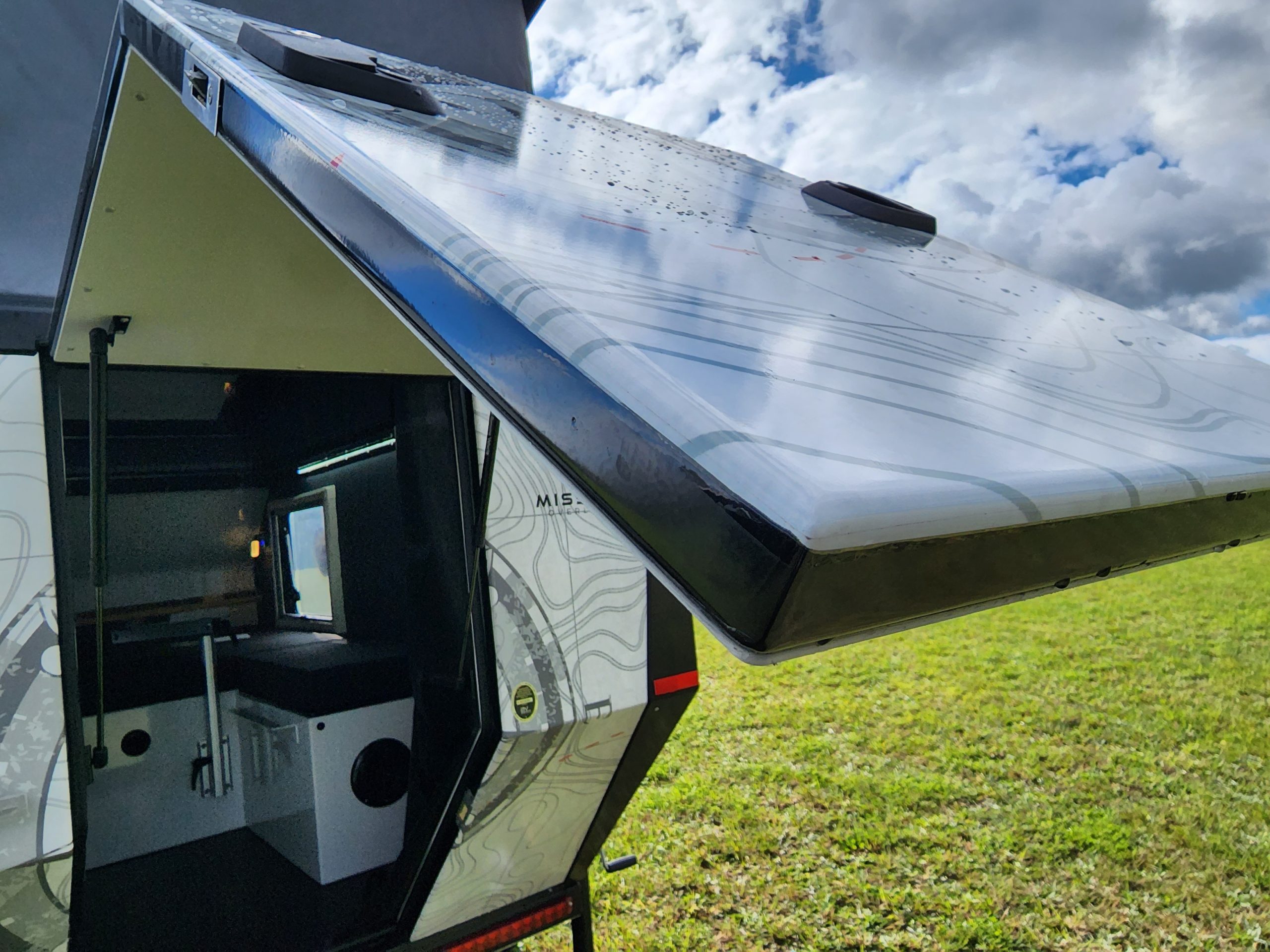 That brings us to another huge difference between the two camper brands: aesthetics. As you can probably tell, Taxa loves theming its trailers after insects. The company’s trailers are also intentionally funky, featuring asymmetrical designs inside and out. 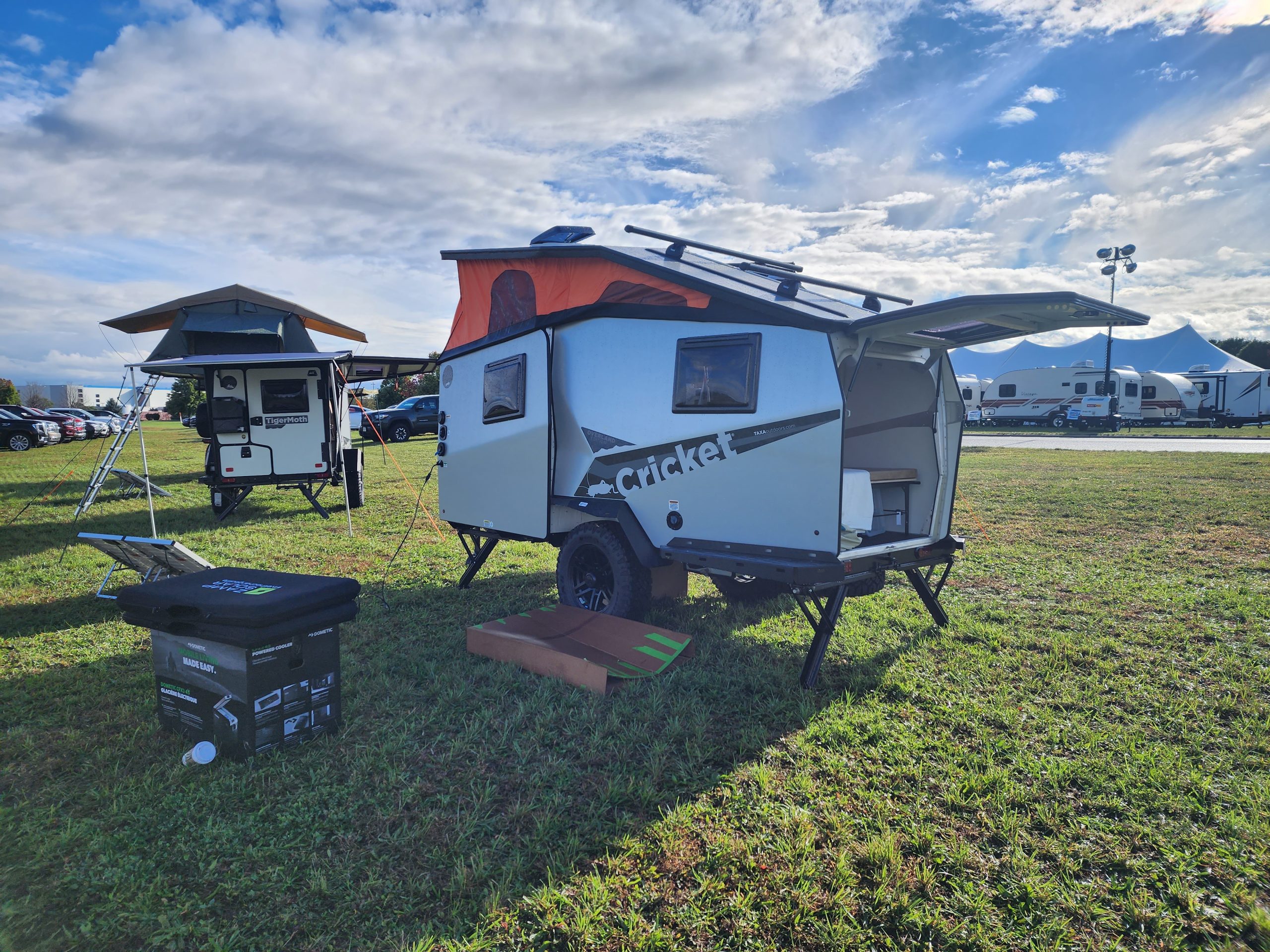 Boring tells me that one of Mission Overland’s goals is to make a camper with sex appeal. So the campers have black-painted metal, sweet graphics, and a shape that makes them look like they’re a camper meant for Mars. They do have a futuristic space age vibe to them.

Check out the Summit all closed up: 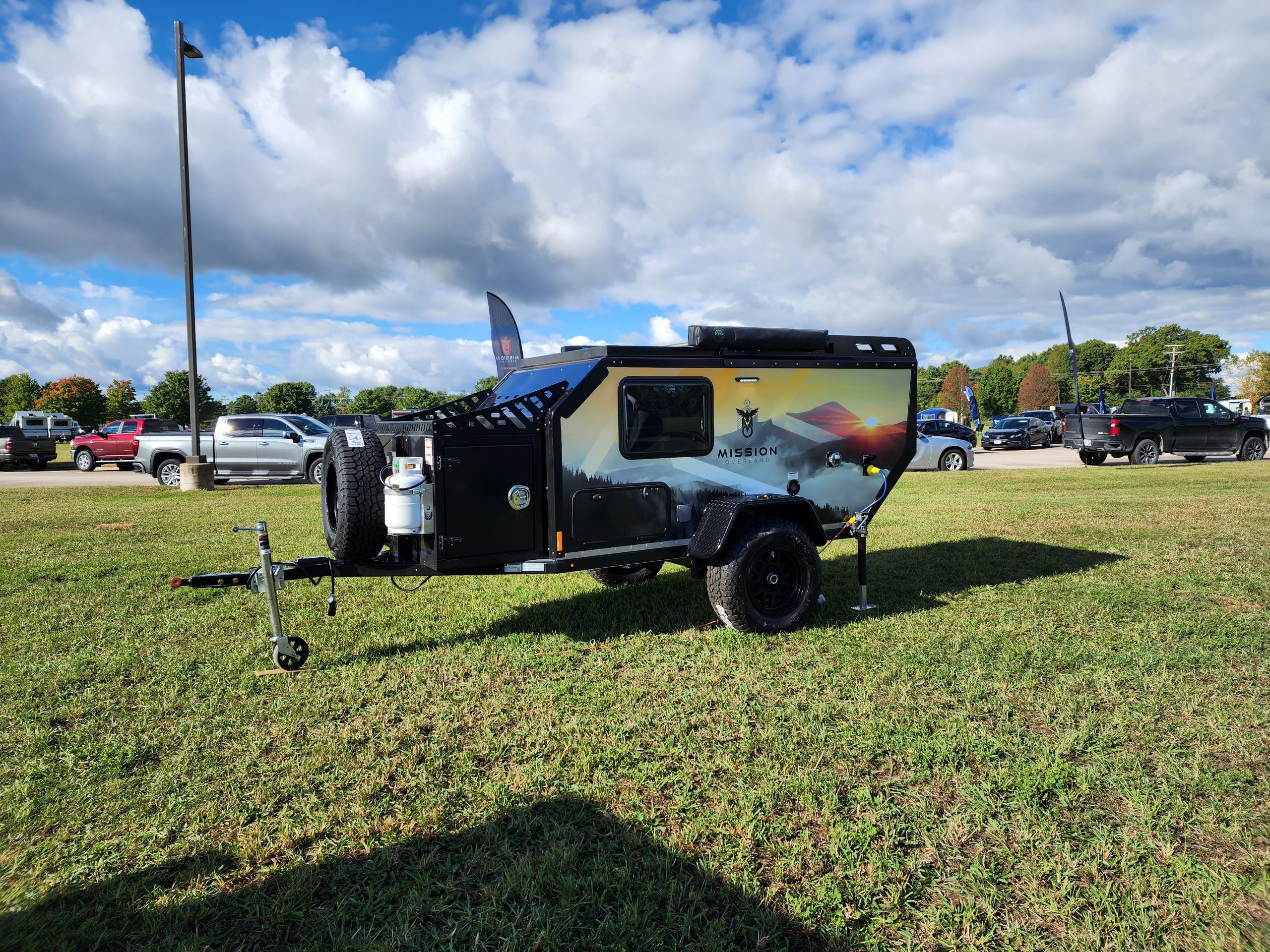 There’s another difference underneath. Under a Mission Overland you’ll see the same Timbren axle-less suspension as you can get as an option on a Taxa. A 360-degree hitch is also there, also an option for a Taxa. But look at this, you get a big skid plate and some protective metal for the fenders: 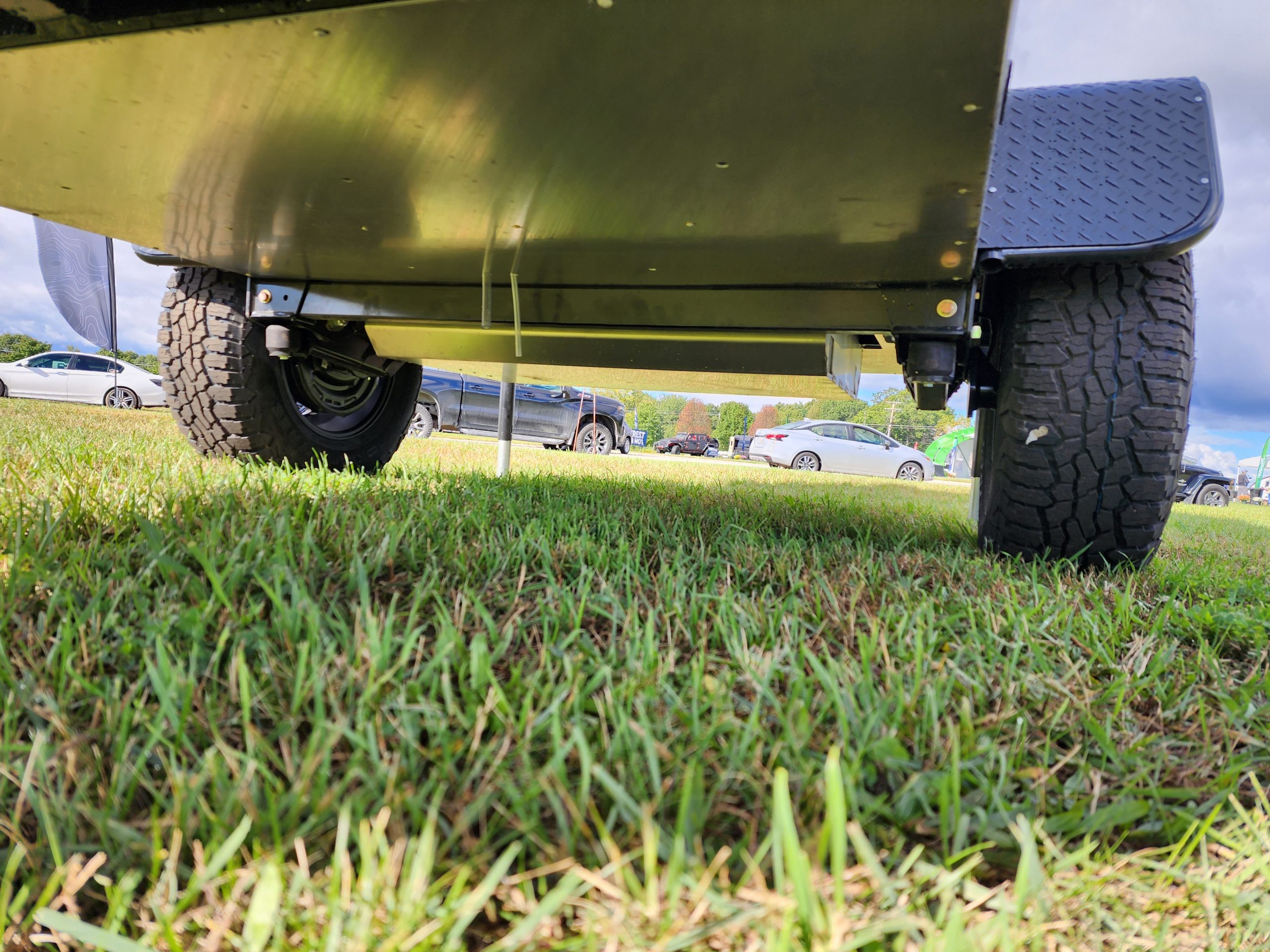 While there really isn’t much to break under a Taxa (see below), I could see one getting its frame hung up on something. That wouldn’t happen as easily with Mission Overland’s big skid plate.

Mission Overland currently sells one model with a second about to launch and one more in the works. The current model, the Summit, is a direct competitor to the Taxa Cricket Overland. A Summit will run you $43,900 compared to $43,745 for a Cricket Overland. The two are the same length, with a similar height and similar width, but the Summit weighs in at 2,250 pounds to the Cricket’s 1,978 pounds. One interesting difference is that the Cricket gets 15 gallons of fresh water storage while the Summit has a huge 37-gallon tank.

Mission Overland is also coming out with the larger Approach. 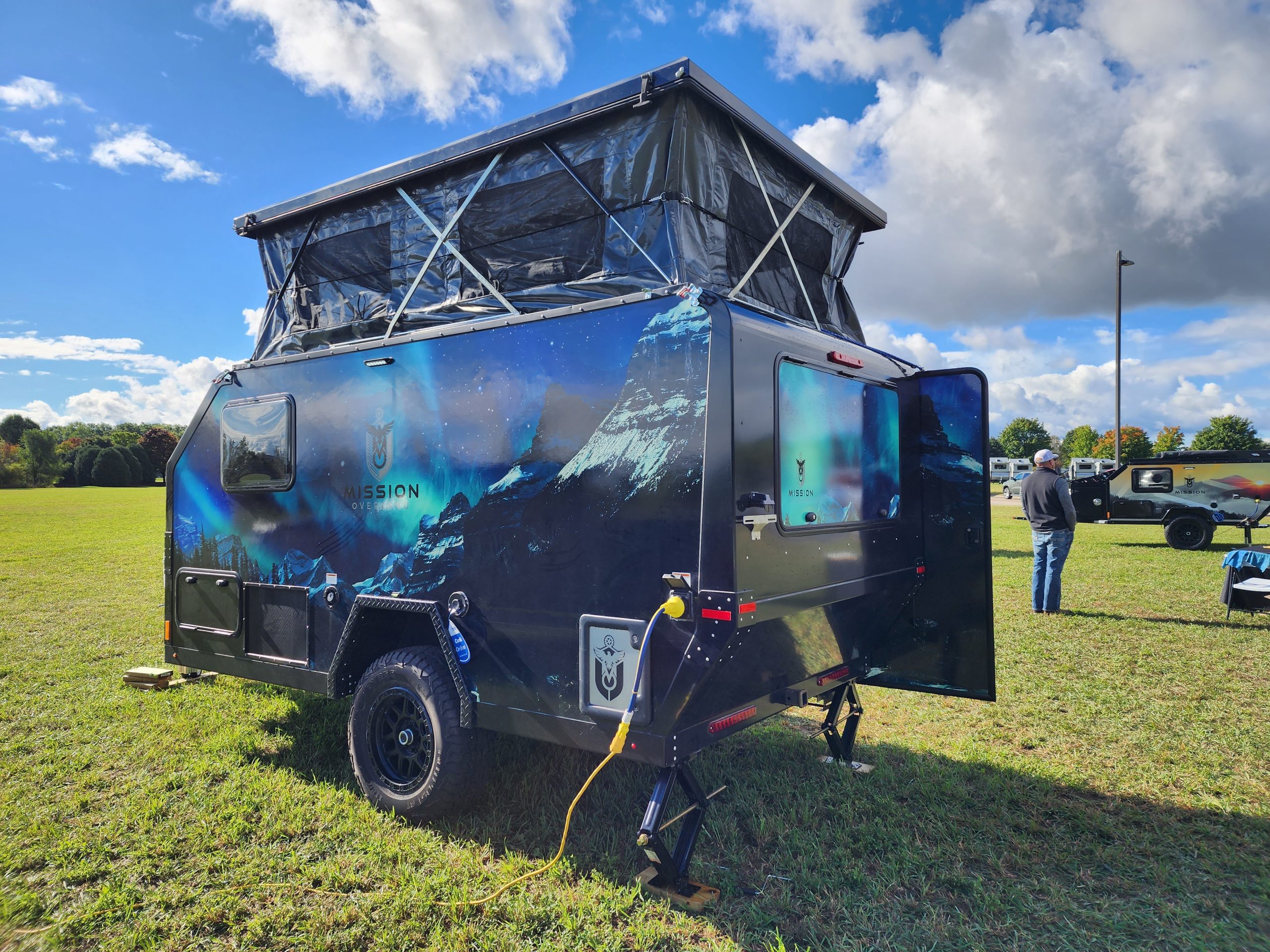 This one is similar to the Taxa Mantis Overland. Pricing and specs aren’t finalized yet, but I’d expect both to be close to the $57,874 Mantis Overland. The obvious difference that I saw between the two is the aforementioned kitchen and window arrangement.

The Approach also has a bathroom, like the Mantis. But unlike the Mantis, where you could sit on the toilet while cooking yourself breakfast, the Approach has more of a contained bathroom unit. 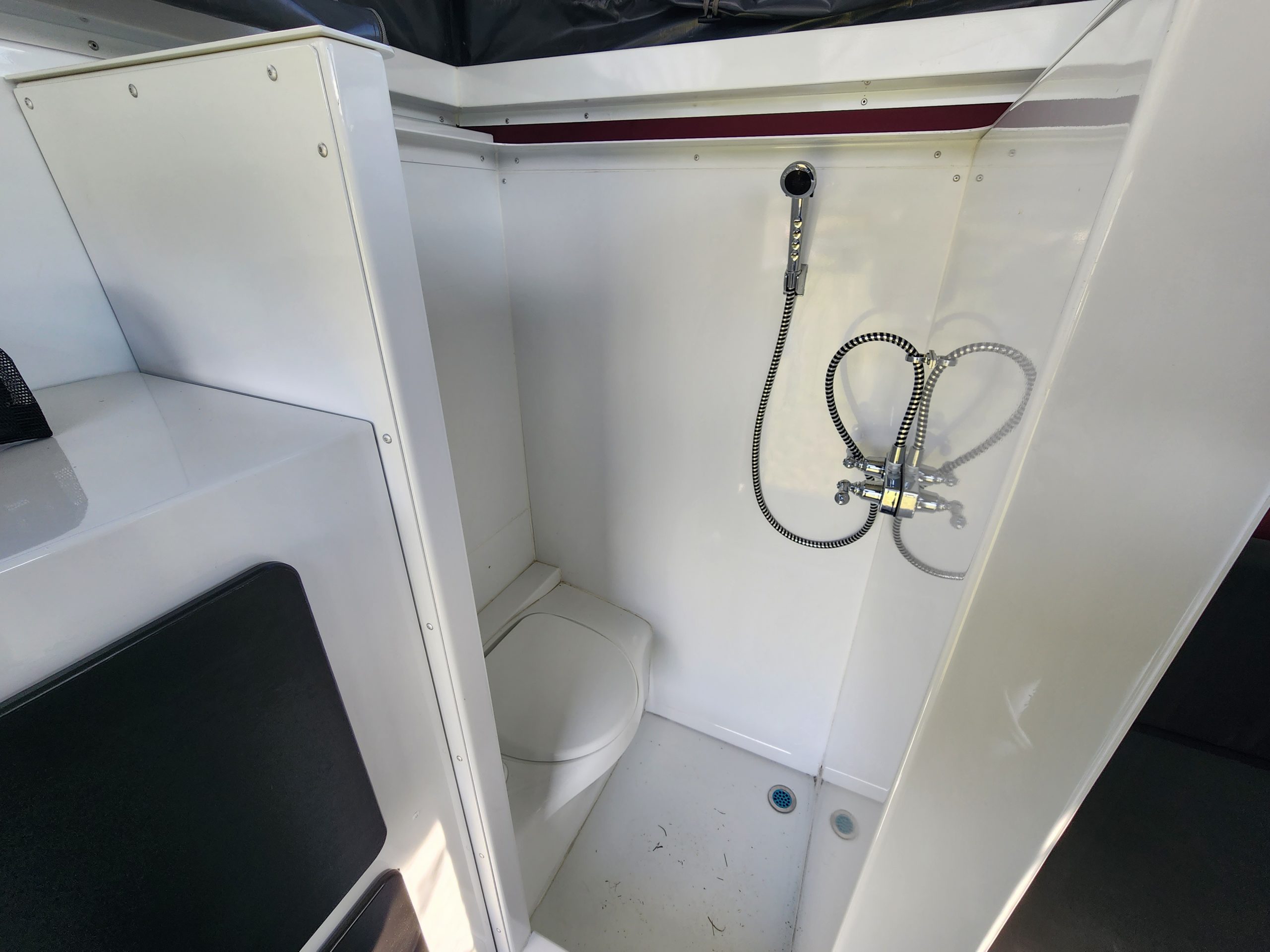 Mission Overland’s third trailer is called the Trail Dog, and that one is a small toy hauler meant to carry bicycles, dirt bikes, and motorcycles with a roof tent. It’s 15-feet-long and about 1,500 pounds. Pricing for this one hasn’t been announced, either.

I was really excited to see these trailers at the Open House and I love that there are companies competing in the space of tiny rugged off-road trailers. I definitely need to try one of these out (as well as another Taxa) and see how they stack up. 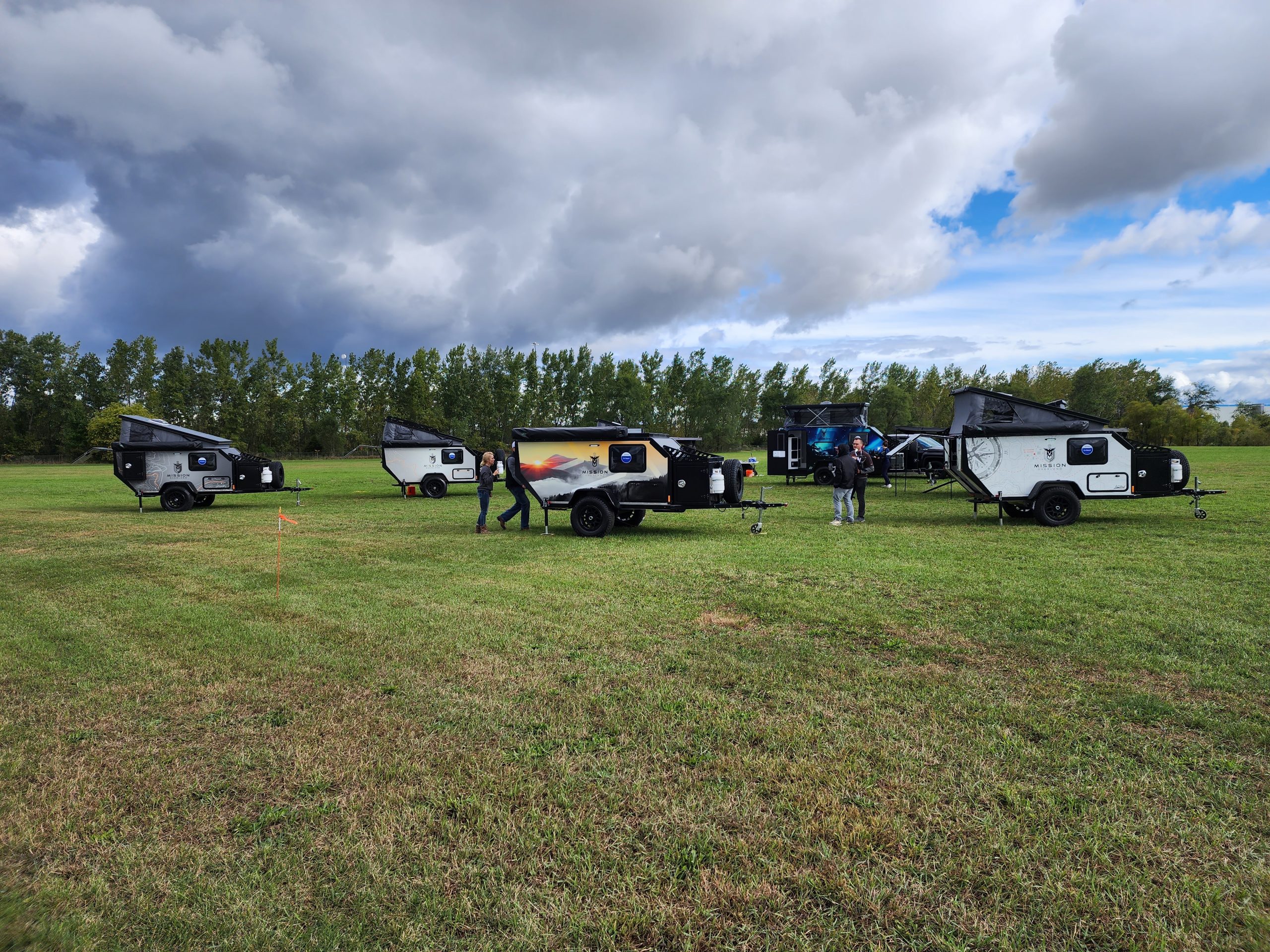 Mercedes is a lifelong fan of all things powered by an engine. When she isn't driving one of her five Smart Fortwos or her 14 other vehicles she could be found in the cockpit of a Cessna 172 or perhaps swimming in any body of water that she could find. She also has a deep love for buses of all kinds. Please send her buses. mercedes@theautopian.com Instagram: @mistymotors Twitter: @Miss_Mercedes30 Facebook.com/neonspinnazz
Read All My Posts »
PrevPreviousLet’s Remember The Hilariously Half-Assed Engineering Solution Ford Devised To Compete With The Chrysler Minivan’s Dual Sliding Doors
NextResearchers Have Been Talking About Front Brake Lights For Decades. Here’s What I ThinkNext