Researchers Have Been Talking About Front Brake Lights For Decades. Here’s What I Think

Picture this scenario. You’re strolling through Manhattan about to cross Fifth Avenue when you see a car barreling along towards the intersection. The WALK light for you is illuminated, the car has a red light. The driver sees you, right? Or, the self-driving system in that car is picking you up? I’m not gonna die if I cross the street now, right? How do you know for certain?

How about this next situation? There’s stopped traffic on I-95, and you’re the last car in the backup. In the rearview, you see a car approaching at a rather high velocity. They’ll stop, right? Or do I need to punch it and get onto the shoulder RIGHT NOW?

The simple answer is that, unless the car in question is a softly sprung thing that buries its nose in the asphalt on hard braking, you just can’t tell. Unless the car has those moving eyes like Jason has reported on, but that doesn’t mean the thing is stopping. What about front brake lights?

Yes, that’s right. Something on the front of the car that can tell people in the path of a vehicle that yes, the driver/car is in fact slowing down.

The idea for this is hardly new, the earliest example I see being from the late sixties. There is a plastics manufacturer called Rohm and Haas, and in the late sixties they were pushing to get their plexiglass technology applied to automobiles. Ultimately, the idea was only implemented (with great difficulty) to one car- the Bricklin SV-1. However, to promote this technology Rohm and Haas made show cars that featured not just their innovative plastics, but futuristic design features as well. Note the lighting on this thing:

WARNING: The following images could cause extreme arousal if your name is Jason Torchinsky 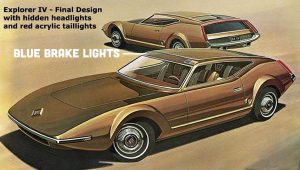 Note the blue front brake lights next to the (equally high visibility) turn signals above the windshield.

A later show car (below) had the blue brake lights above the headlights.

This one even had a green light in the back to show that the car was accelerating! If you scroll though the link to the brochure..it has a bunch of other insane features like a roll out trunk: 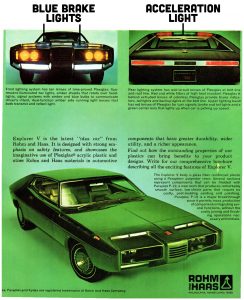 More recently the great design Godfather (or is that Golf-father…HA!) Giorgetto Giugiaro has been a proponent of these.  Note his comments on one of his concept cars that he designed not that long ago:

“See the brake lights at the front?  It means pedestrians know when you’re slowing down at crossings!” 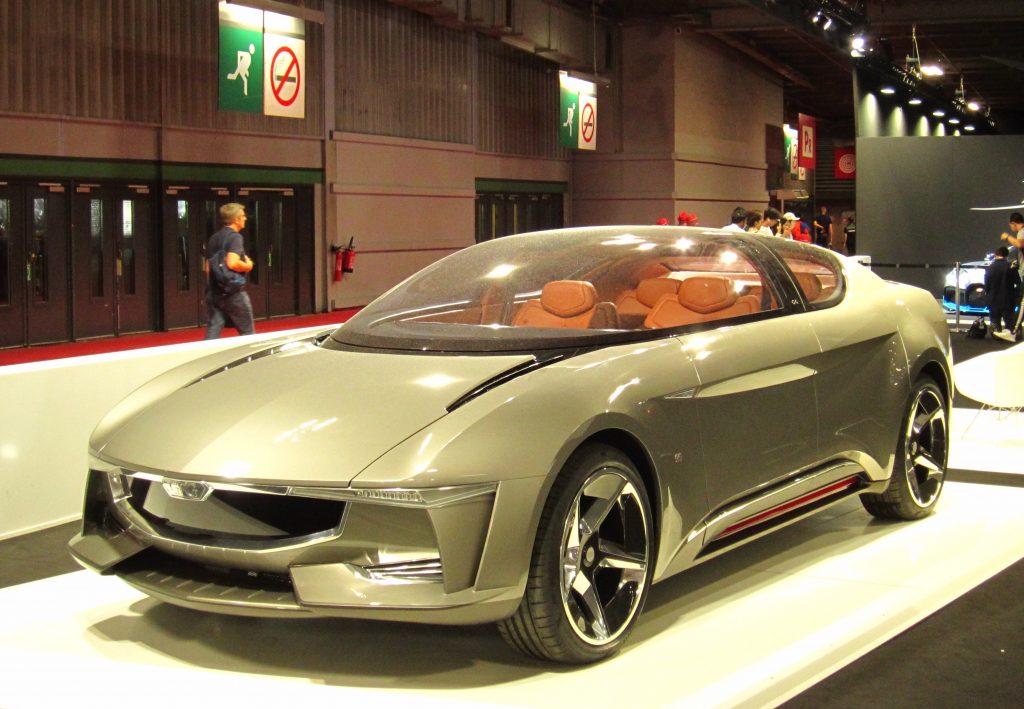 There’s even a website devoted to front brake lights (which seems to suggest a green color on the grille).

[Editor’s Note: This appears to be some kind of German research organization assessing the feature’s value and its regulatory viability; just look at all these Germans talking about front brake lights (“Vordere Bremsleuchte”) at a conference in Belgium:

The organization introduces the technology’s purpose on the website’s home page, writing:

Given the complex triangular relationship between human, vehicle and environmental factors, advances in traffic safety will always have to encompass a variety of innovations. One of these could be the front mounted brake light, a forward-facing lighting device that illuminates simultaneously with the rear brake lights and tells on-coming road users that the car is braking.

The home page continues, discussing the main potential benefits of the tech:

The catalogue of possible applications of a Front Brake Light includes multiple cases to improve communication between road users and thus ensure greater traffic safety. Such cases are by no means limited to asymmetric conflicts (e.g. vehicle / pedestrian). Also in a vehicle / vehicle constellation the Front Brake Light has potential to avoid collisions.

Main benefits of a Front Brake Light are expected to be

The site even includes a research paper written by some of the people in the photo above. Titled “Potential safety effects of a frontal brake light for motor vehicles,” it begins with an abstract highlighting the point of this whole discussion:

The number of pedestrian casualties in crashes with motorised vehicles is still alarming. Misunderstandings about the other road users’ intentions are certainly one contributory factor. Especially given recent developments in vehicle automation, informing about ‘vehicle behaviour’ and ‘vehicle intentions’ in the absence of any direct interaction between the driver and the outside world is becoming increasingly relevant. A frontal brake light which communicates that a vehicle is decelerating could be a simple approach to support pedestrians and other road users in the interaction with (potentially automated) motorised vehicles.

The paper includes some kind of video-based research that concluded, with a number of caveats about the setup, that the light helps pedestrians more quickly determine when a car is slowing down:

The results of our investigation indicate that the use of a frontal brake light can lead to considerable improvements in the identification of a vehicle decelerating. This, in itself, is not surprising. The extent of these improvements, however, is remarkable. For example, without a frontal brake light, the identification of a rather average deceleration (3.5 m/s2 ) that started at a typical approach speed (50 km/h) took a full 1.5 s longer than with the light. This technology, therefore, has obviously the potential to speed up decision processes with regard to pedestrian crossing decisions. In general, any road user ahead, e.g. another car about to make a left turn across our vehicle’s lane, might benefit from the information. It has to be acknowledged, however, that the chosen laboratory setup and the video material that was used reflect only parts of a natural crossing situation.

Here’s a plot from that paper: 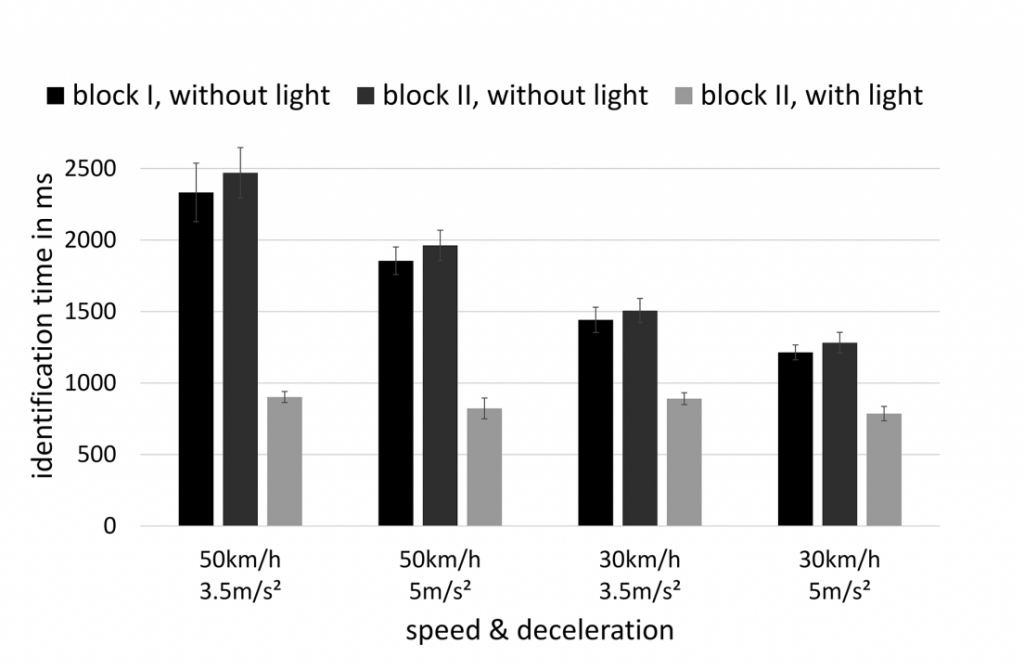 The German front brake light advocates mention on their website a 1971 study by the Highway Safety Research Institute at the University of Michigan. Titled “SUBJECTIVE EVALUATION OF THE FRONT-MOUNTED BRAKING SIGNAL,” the paper includes the following conclusion based on surveys conducted of laypeople and of people who had driven for a month cars equipped with experimental front brake lights:

1. Some subjects felt that the front brake signal had some utility as a means of increasing inter-driver or driver-pedestrian communication.

2. The findings of this preliminary investigation suggest that a more comprehensive evaluation is warranted.

3. Objective evidence should be provided that a front brake signal will provide a greater margin of vehicular safety.

4. A study should be conducted using test vehicles to determine how this added signal will affect the performance of other drivers and pedestrians. For example, a driver whose vehicle is not slowing down may tap the brake pedal when approaching an intersection and find cars pulling out dangerously close in front of him, because the other drivers assumed that he would make a right turn.

5. If such a signal should be found to be valuable it would probably be necessary to conduct a public education campaign to explain its function.

There’s even discussion about the right color and location of a front brake light:

The preference of the non-users was for a red-colored grille located “front brake light.” This preference was apparently modified by use of the forward brake signaling unit as users indicated a preference for an amber light located on the windshield. It is evident that persons unfamiliar with the forward brake signaling concept did not consider the amber color and windshield location to be obviously appropriate. Thus, a conflict exists between initial preference and the effects of exposure to an alternative color and location. It should be noted that at one time blue was considered an appropriate color for a front brake light (Fisher and Bostwick, 1968) .

And there are notes on what the subjects who used the lights for a month thought about the light’s purpose, its brightness, its flaws, and more: 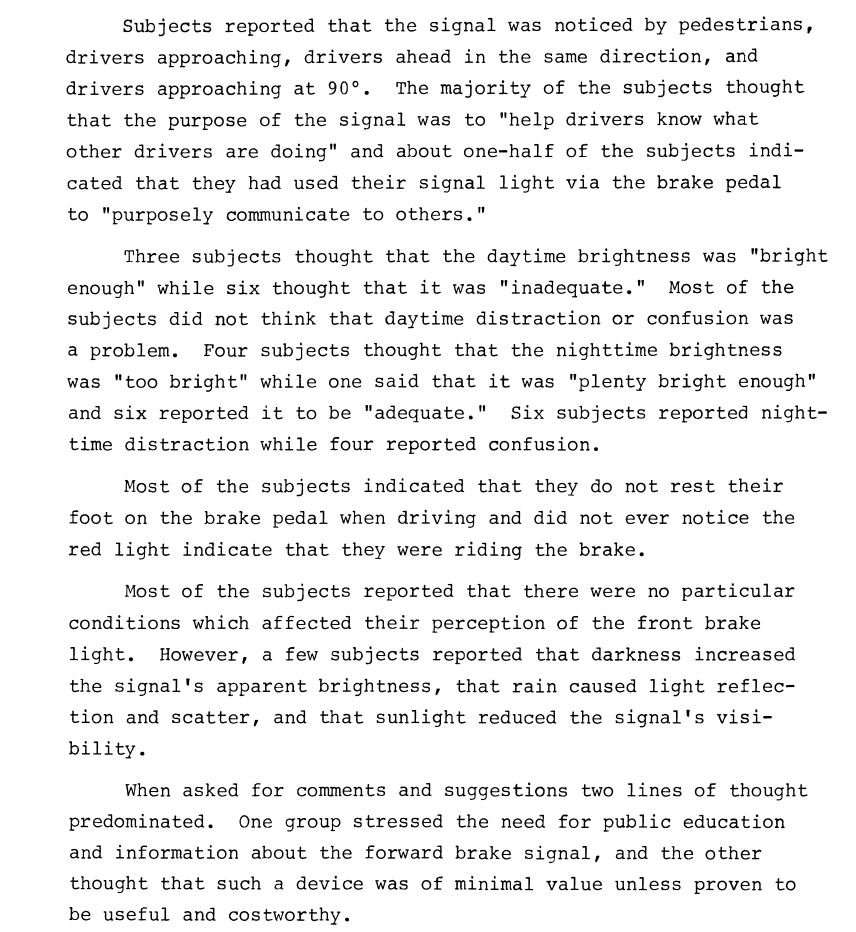 Anyway, back to our daydreaming designer, The Bishop. -DT] 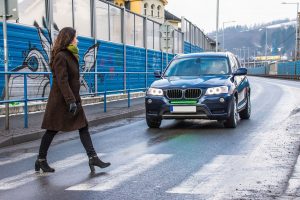 Actually, it would probably have to be two, since in many cases the center of the windshield is filled with rear view mirror and driving assist cameras. I’d like to see red, but are there laws against that? Likely, but laws can change, and red really does mean stop. Having it high up and aimed at sort of an angle would keep your hood from getting a red glow from the lights.

One other thing. I don’t know if this should be wired directly to the brake lights in back, and here is why. The idea is to show pedestrians and other cars that you are stopping. When at a standstill or, worse yet, sitting in bumper to bumper traffic with everyone on the brake pedal, that’s a lot of red light (or blue light or whatever) to be shining in your rear view mirror or camera.

[Editor’s Note: It’s worth mentioning that the German organization running “Frontbrakelights.com” addresses both why it thinks green would make for the right color, and how the system would wire into a current vehicle’s electrical system:

A Front Brake Light must be regarded as a light-signalling function (LSF) within the meaning of authorization[1], as a version with a lower light intensity would not be fit for purpose.

For the conception of a new LSF on motor vehicles, there is always the question of the appropriate light colour to be used – as well from a legal as a factual point of view. As other colours are legally assigned already to special situations and / or special types of vehicles, choice is left between green and white.

Given the already existing high number and range of variation in forward-acting white light signals (dipped beam, high beam, fog lights, etc.), the use of a white Front Brake Light could result in ambiguous information being received, thus nullifying its benefit for traffic safety.

The colour green, however, is not used for LSF on motor vehicles yet, but therefore offers the advantage of unambiguousness and fast signal identification. Furthermore it is well known in road environment (i.e. traffic signals) and for purpose of a Front Brake Light will also be supported by psychological points of view against other colours, especially red.

It is assumed that the Front Brake Light is linked directly to the rear brake lights and thus only one more device must be connected to otherwise identical circuits in the control unit(s). With regard to the design of a Front Brake Light, a number of variants are conceivable, depending on the type of vehicle and its vehicle design.

Therefore implementing a Front Brake Light within existing technical conceptions of vehicles is most easy from a technical point of view.

I think the light itself could work similar to something BMW has done (and others likely as well) called Brake Force Lights. What this involves is essentially taking the red lights that are used as rear fog lights overseas and wire them up so they illuminate when heavy brake pressure is applied (probably when ABS is engaged). They then turn off and do not light up in normal braking. 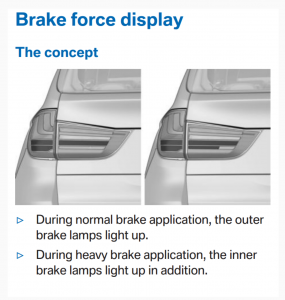 These front lights would illuminate only on moderate to major deceleration (remember, EVs can stop without brakes) but then turn off after five to ten seconds of the car stopping. [Editor’s Note: Or you could wire them up to an accelerometer, and have them illuminate when there’s a certain rate of change of velocity. -DT].

source: Tesla and The Bishop

Do we REALLY need more lights on a car? I would argue that we do, especially with the advent of self driving cars and virtually everyone wondering if these will work or if they are gonna go Maximum Overdrive on us (terrible movie).

What do you Autopians think?

Read All My Posts »
PrevPreviousI Took A Close Look At Some Lightweight Off-Road Campers That Actually Look Badass. Here’s What I Saw
NextThe 2023 Honda CB750 Hornet Packs A 90-HP Punch For A Great Price, But Americans Might Miss OutNext