One of the most under-appreciated problems with self-driving cars isn’t really a technological problem at all; it’s a social and communication problem. The issue is that we, as humans (or possibly bonobos) rely far more than we realize on unspoken communication with other drivers, pedestrians, cyclists, even animals. This communication can take the form of body language, motion, behavior, or, perhaps most powerfully, direct eye contact. Our eyes telegraph a hell of a lot about our focus, attention, and intentions. Cars, even automated ones, lack human-style eyes, which makes this sort of communication impossible. One team in Japan has a simple solution: give the cars eyes. Duh! 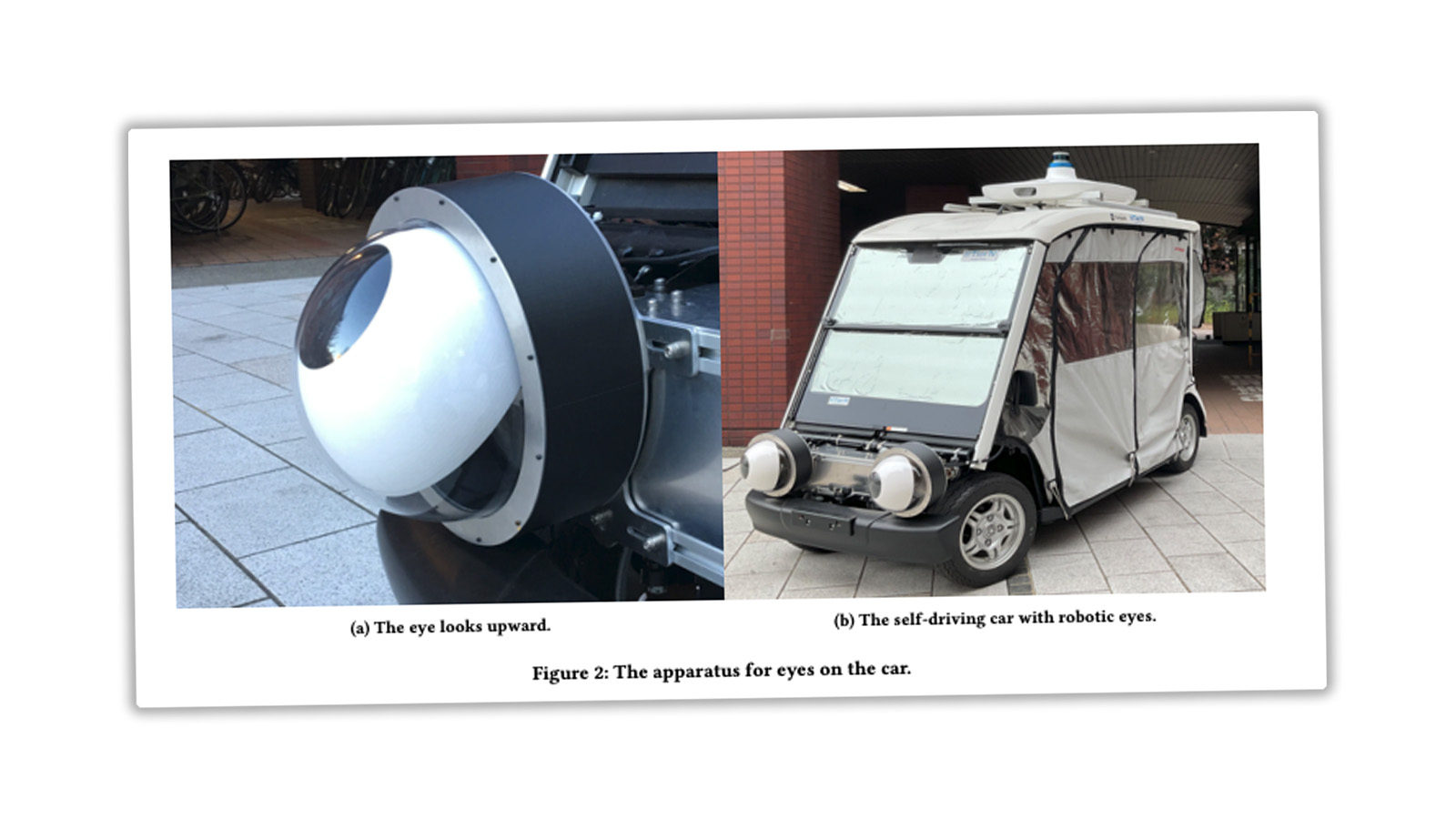 [Editor’s Note: Jason addressed issues like this, how human behavior and culture are important factors worth considering, in his book, Robot Take The Wheel, so maybe you should buy a copy, already? – MH]

Yes, eyes. Give them to the cars. Ideally, big googly eyes, and, more importantly, they should be positioned in the correct place, where the headlights are located, and which is very much not the windshield. The team of University of Tokyo researchers called their project Gazing Car, which involved fitting a golf cart-sized car with large, robotic eyes that conveyed where the car’s attention was focused and the car’s intended general path.

The team acknowledged that equipment like turn indicators do some of this sort of work, visually conveying the car or driver’s intent, but it seems the eyes have potential to convey even more information.

Here, they made a video demonstrating the project:

There’s a lot of interesting stuff in there; in addition to the real-world tests, they also conducted virtual reality tests, and in those found a 64% reduction of unsafe street crossings when the cars had eyes on them compared to those that did not.

Various car manufacturers and researches have explored the idea of adding eyes to a car as an additional communication modality. A previous work showed that autonomous vehicles’ (AVs) eyes help pedestrians make faster street-crossing decisions. In this work, we examine a more critical question “can eyes reduce traffic accidents?” In order to answer the question, we consider a critical street-crossing situation where a pedestrian is in a hurry to cross a street. If the car is not looking at the pedestrian, it implies that the car is not recognizing the pedestrian. Thus, the pedestrian can judge that they should not cross the street, avoiding potential traffic accidents. We conducted an empirical study using 360-degree video shooting of a real car with robotic eyes. The results showed that the eyes can reduce potential traffic accidents and the gaze directions can increase pedestrians’ subjective feelings of safety and danger. In addition, the results showed gender differences regarding critical and non-critical scenarios in AV-to-pedestrian interaction.

That last sentence there is especially interesting: gender differences? It does seem that the researchers did find differences in how men and women reacted to the eyes, which I wouldn’t have expected.

For example, they found eyes reduced accidents for men, while it improved efficiency for women: 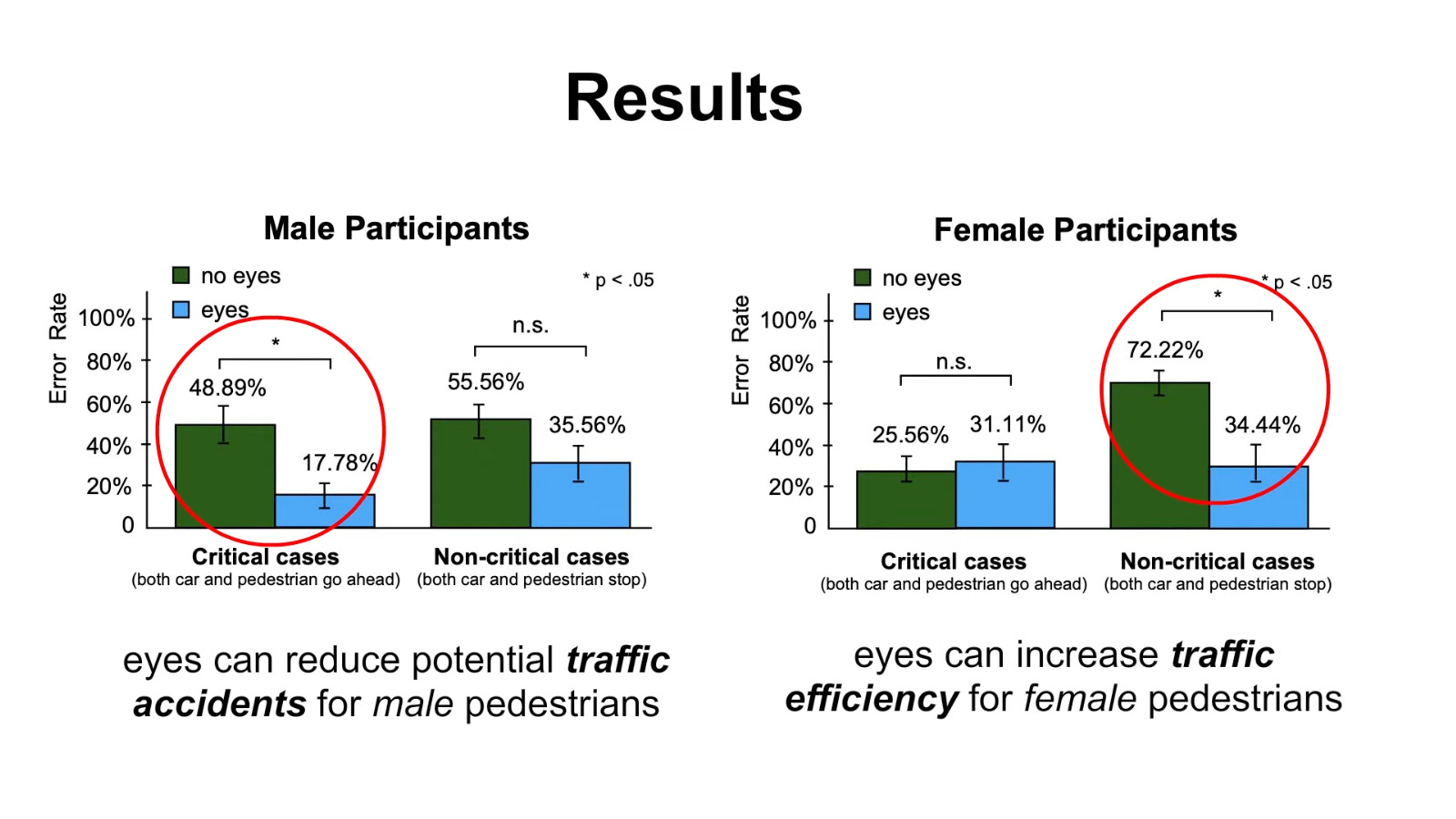 The team’s work is extensive, expanding to situations beyond just basic street-crossing situations to include more advanced, “critical” situations including ones with a hurried street crosser and the car both willing and unwilling to yield to the pedestrian:

There’s a lot of interesting information in these papers and it’s focused on a part of AV development that tends to get overshadowed by the more dramatic actual driving and object avoidance and other parts of the automated driving problem. 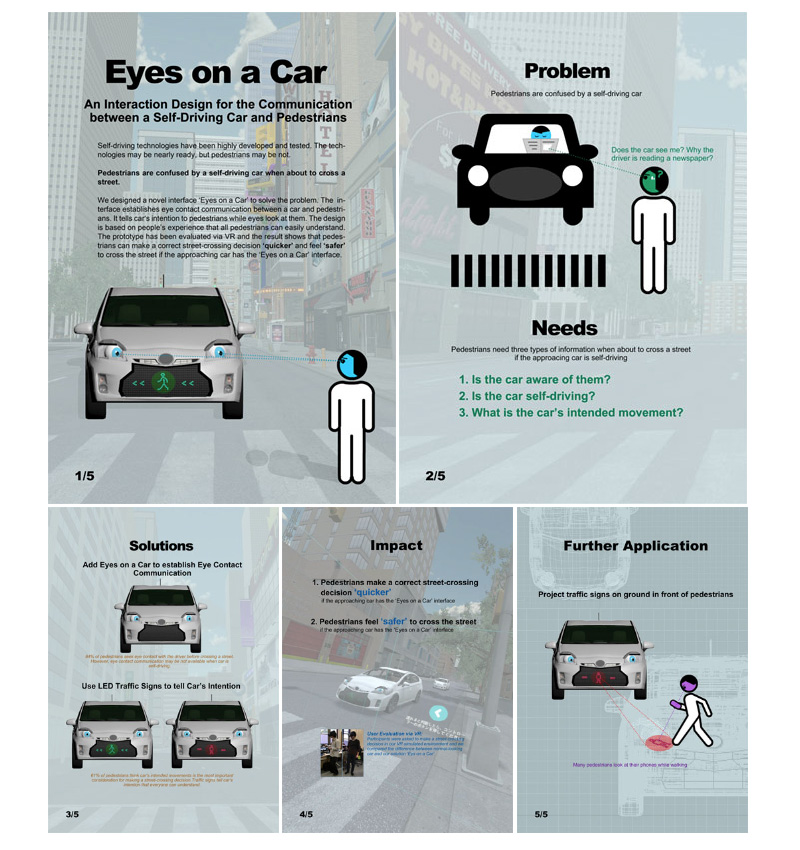 We communicate almost constantly as we drive around other beings and people in other vehicles, whether we realize it or not. Part of making a truly automated vehicle will be to automate those innate communication processes we take for granted. Automated vehicles need to operate in the world of human culture and communication, and if that means cars will end up being designed with big, hilarious eyes, then, well, so be it.

It’ll be fun to watch the car designers go nuts with this, anyway.

I'm a co-founder of the Autopian, the site you're on RIGHT NOW! I'm here to talk to you about taillights until you cry and beg me to stop, which I absolutely will not. Sorry. Hug? Also, David's friend.
Read All My Posts »
PrevPreviousComfy East Coast Rides: 2006 Acura MDX vs 2000 Volvo S80
NextA Daydreaming Designer Looks At An Alternate Van Reality for VolkswagenNext