A Daydreaming Designer Looks At An Alternate Van Reality for Volkswagen

It’s always depressing to see when people have the answer right in their hands yet are either totally unaware of it or unwilling to act. In the automotive world, the minivan is one of those innovations where the parties that essentially came up with the idea totally missed the boat.

You probably think I’m talking about Ford, the company that developed the MiniMax concept in the seventies, only to have the project nixed by the guy whose name was on the building. This idea was famously implemented at Chrysler with massive success by guys that Henry Ford II fired. 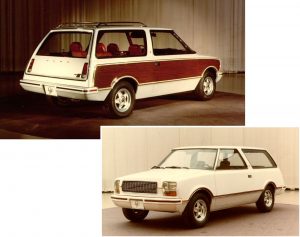 No, I’m here to talk Volkswagen group. Most enthusiasts know that the VW Bus revival (now the electric ID. Buzz) has been floated around for nearly two decades; an immense amount of time to wait for something that is likely to be a smash hit. Yet that’s not the vehicle I am referring to.

One of the VW Group’s acquisitions over the years was Auto Union, a group of four brands of which only Audi survives today. Note that Wanderer brand logo- Volkswagen should sue Weezer and Wonder Woman for copyright infringement.

A now-defunct brand from this group was DKW, a firm that made something called the Schnellaster from 1949 to 1962. This little van is likely one of Torch’s favorite vehicles since it’s

1.) from a defunct German manufacturer related to VW

3.) is sort of silly looking in a rather cute way 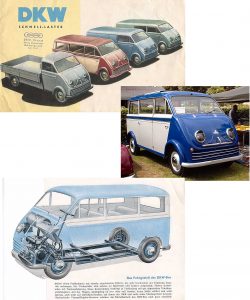 Odd looking as this thing is, it’s actually a rather unrecognized innovator. It features a transverse front drivetrain, a flat floor, and seating for up to seven people in a small space. It’s essentially the blueprint for the modern minvan in 1949.

What did Volkswagen do with this innovative concept? Nothing. Absolutely nothing.

So many other companies saw the value and floated ideas of little vans, my favorite being the Greatest Concept Car Of All Time, the AM Van. This hilarious show car never got off the ground, and it’s not like American Motors had a platform that could make it work anyway. It’s a crime that this thing never came to life; I still smile each time I see it. 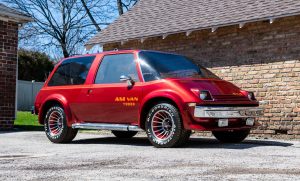 What about an alternate reality where the VW Group actually DID do something with this Schnellaster formula?

Let’s say it’s the late seventies, and Wolfsburg needs a new small commercial vehicle, a size below the Type II ‘Bus’. Volkswagen then discovers a fun fact: the overall length and wheelbase of the Golf is within a few inches of the old Schnellaster, making it a great platform for a little truck. During this time, I cannot overstate how successful the new Golf/Rabbit was on the market, and deservedly so. It was an excellent car with very few rivals that offered anywhere near the same level of sophistication. Also, if there is thing that the Golf lacked it was a station wagon, which at the time was a still-popular body style. What if they made a passenger version of this new little van instead to fill the the void?

Presenting the DKW 1600 Combi, and old name on a modern mini-mini van. Of course, in the United States that DKW name would not fly, and instead this thing could be sold as a Volkswagen. I thought about Rabbit Wagon but then decided on Duck (DKW=Duck, like the old amphibious vehicle). Like The VW Thing, it’s a cute name, and BOY is this ever disgustingly cute. 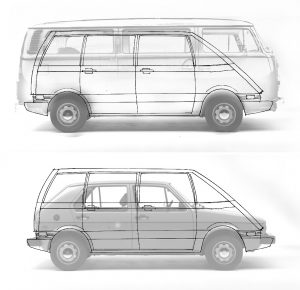 source: The Bishop and netcarshow

This vehicle would be available as a five passenger wagon with windows all around, and available tiny center-facing jump seats in the cargo area to take seven people in a pinch. The seats can be removed for a full cargo area, just like the old Schnellaster. There would also be a pickup version with two seats mounted outside in the bed to avoid the Chicken Tax as was done with the Subaru BRAT. With Rabbit/Golf mechanicals it would be a blast to drive as long as you didn’t want to go fast (the gas version had nearly 80 horsepower but the Diesel version had 48, or less than 7 horsepower per passenger if all the seats were filled…still, Torch says that 50HP is all you need). 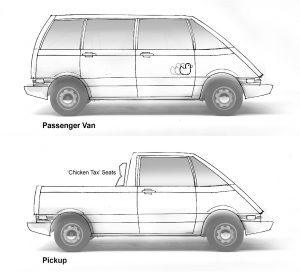 My favorite version, of course, would be the windowless commercial version (with one siding rear door on the passenger’s side), because it could be outfitted with a stripe and trim package to take advantage of the seventies Custom Van trend (see Pinto Cruising Wagon). It’s called the Autobahn Package since people in Germany loved to drive down the highway in cars with giant red and orange graphics and eagle stickers. While talking on CB radios. I can just see VW of America execs trying to convince German superiors to allow a ‘bubble window’. Still, it would HAVE to happen: 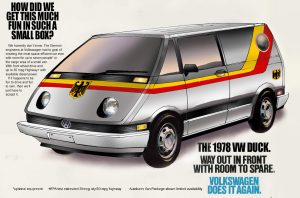 source: Jalopnik/Volkswagen and The Bishop

The funky nose of the Schnellaster is retained, with sunken eyes in the sloping surface (in place of much cooler glassed-in lights that Euro market DKW models would have). There is a VW logo to give an identity but small to not tread too heavily on the Type II ‘Bus’. To make the Duck look not as tall, there are black trims below the glass to visually give the impression of larger windows; on front they house HVAC intake vents and turn signals, while the sides hide the door handles. The whole thing looks more like the front of a Metro train than a street vehicle.

At the back, I needed to look at Jason’s idea for a fold down tailgate and ramp. I wouldn’t make the whole door fold as he did, but a ‘clamshell’ two part gate. There could be an expandable frame in the lower tailgate and fold over floor to allow the tailgate to form such a ramp; I would likely make this optional since the weight, cost, and complexity might not be worth it for buyers that would never use it. 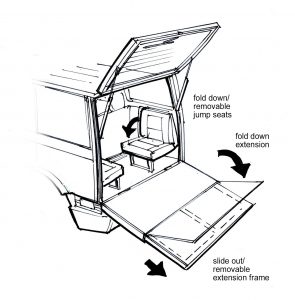 The dash would be like the original Schnellaster with the gauges and controls dead center, leaving enormous expanses for storage on either side. With the depth of the windshield you might have more cargo space in the three gloveboxes than total in some sports cars. 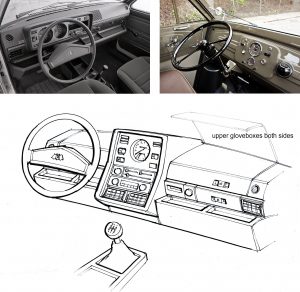 Would this have been a popular vehicle? I have to believe that with the utility and economy it offered, combined with it’s fun-to-drive characteristics and smile-inducing looks, it would have been perfect for the times and a get-my-checkbook runaway success.

Why didn’t VW do something like this, or ANYTHING similar to the later-much-copied Schnellaster? My only wild ass guess would be that it didn’t want to cannibalize Type II Bus sales, even though something like this would have been a smaller, much different vehicle. Compounding the problem was that Volkswagen held on to the aptly-titled sit-over-the-wheels ‘Bus’ and the rear engine concept far too long (like with the 411/412) and by the time they wised up it was too late to have anything competitive.

The irony is that despite essentially owning the concept of the modern minivan for seventy-five years, Volkswagen ended up ultimately selling a rebadge Chrysler minivan in America (the forgettable Routan) before abandoning the market altogether. 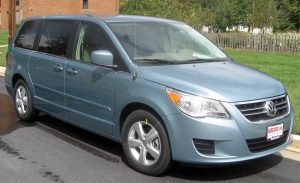 No, I just made up and Photoshopped that last one…didn’t I?