The number of ways to gain access to, and to shove stuff into, the rear end of a car is very likely finite. Over years and years of development, those options seem to have coalesced into a few primary methods: trunks (lift up and flip-down), hatchbacks, opening rear windows, single side-opening doors, double side-opening doors, and split tailgates, with some variants that combine these elements (like that Skoda Twindoor trunk/hatch thing or those ’70s American station wagons with the rear that could open sideways like a door or down like a tailgate). There’s been a lot of innovation here, but I was thinking about one solution that’s seemingly never been tried: the full-height tailgate. Let’s think about this!

I’m a huge fan of tailgate designs overall, where the lower half of a car’s rear door drops down to open, forming an additional load platform in the process. My Nissan Pao has such a setup, which I’ve used to good effect, carrying things longer than the normal cargo area and using the tailgate as a very handy seat/table when parked. 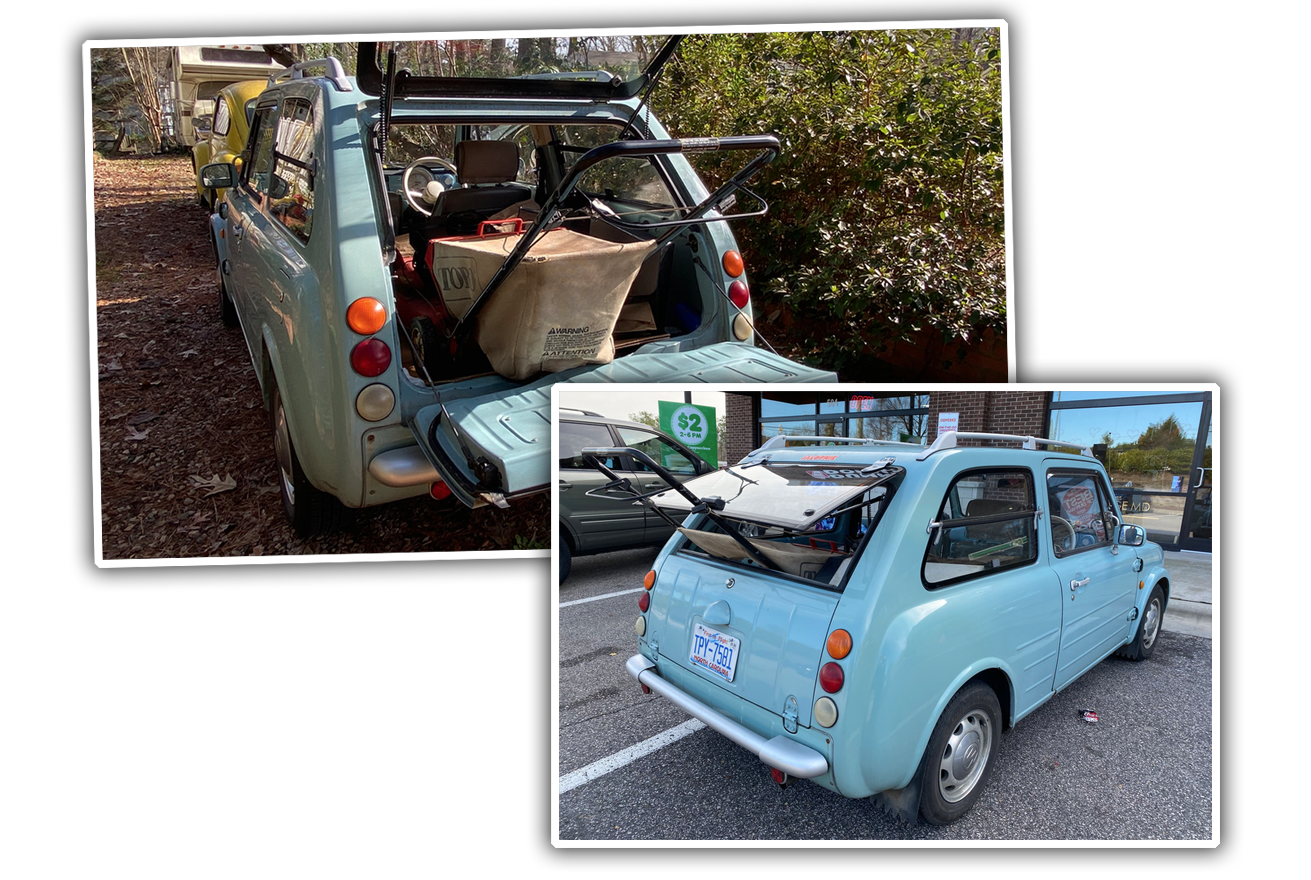 A lot of cars used this type of tailgate system, including the original Mini, which was a trunked setup instead of a hatchback (lacking even an opening rear window like on the Pao) and used its tailgate-style trunk lid as a way to extend the cargo-hauling ability of the car. The setup included a hinged license plate so you could legally drive with the lid open: 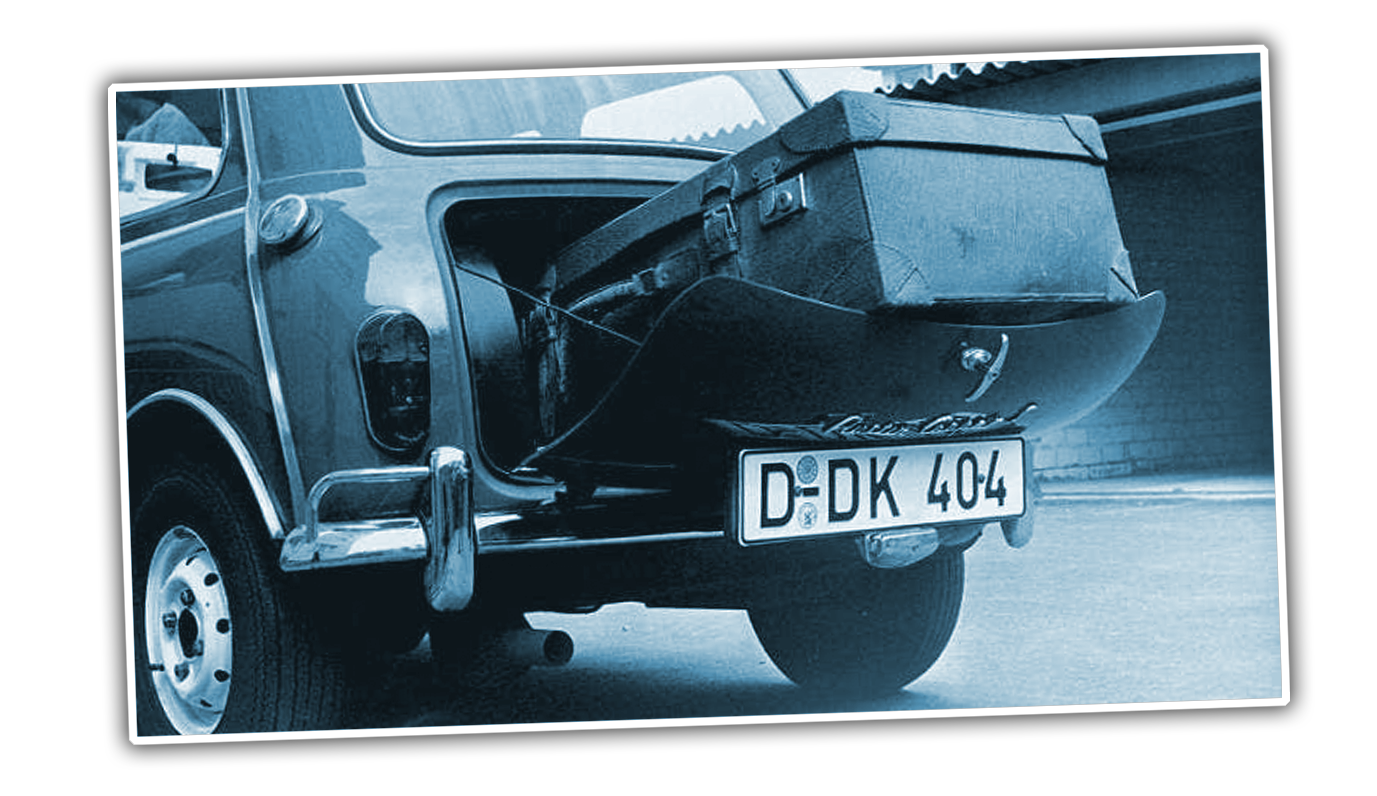 Very clever and useful! Also clever and useful was Ford’s 3-Way Magic Doorgate, which opened out like a door, and down like a tailgate (see image below on the right). GM had a version of this as well, but also had something that was arguably even cooler but less useful: a tailgate that would disappear into the body of the car (on the left): 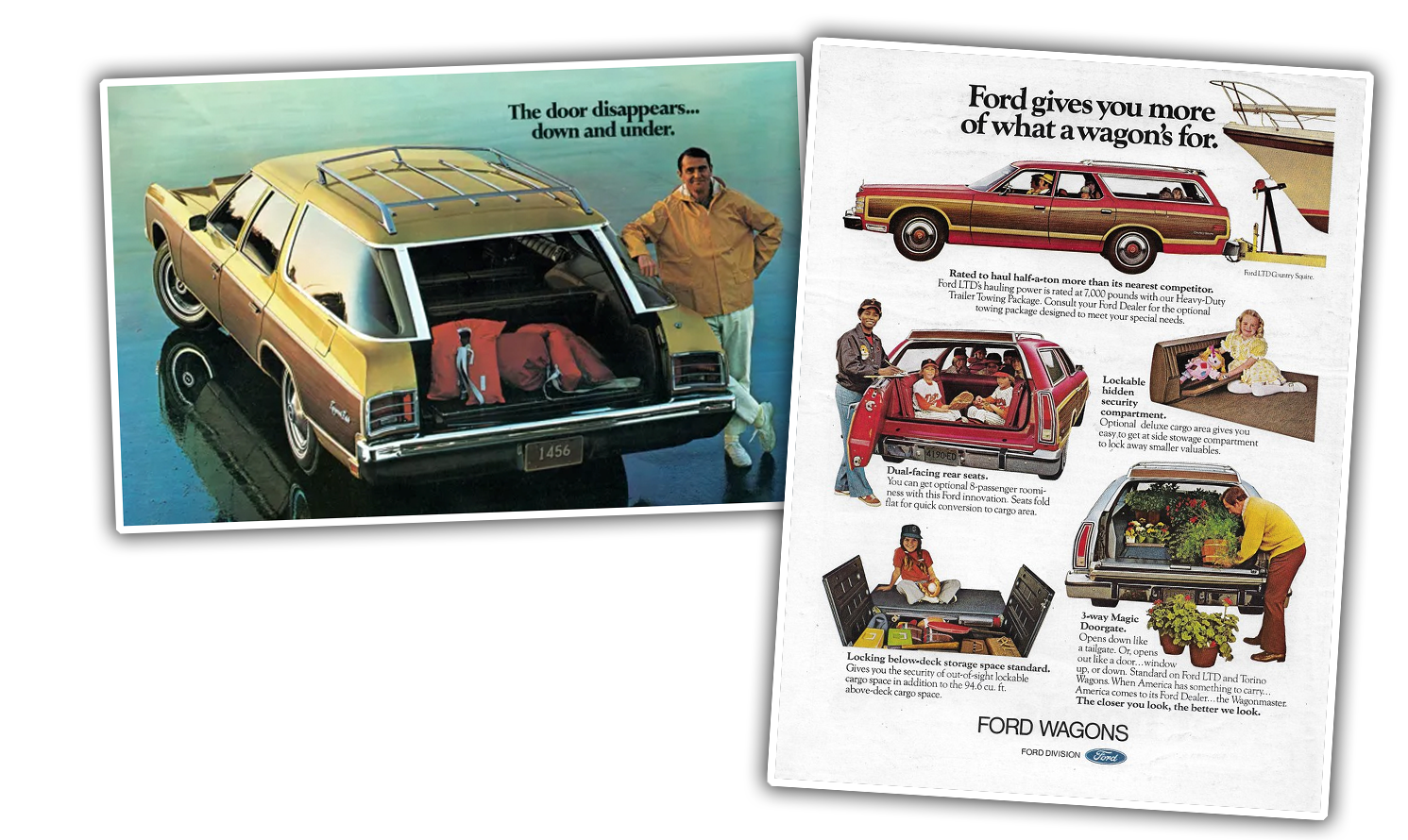 Sure, that’s a cool party trick and it makes loading easier, but you lose the whole “extra load/sitting platform” aspect of a tailgate, which I think is key.

For all of these designs, there’s one constant: a tailgate is never more than half the height of the car. There has never been, as far as I can tell, a full-height tailgate design. Why not?

I had to do some quick sketches to think this through. Here’s what I’m thinking: 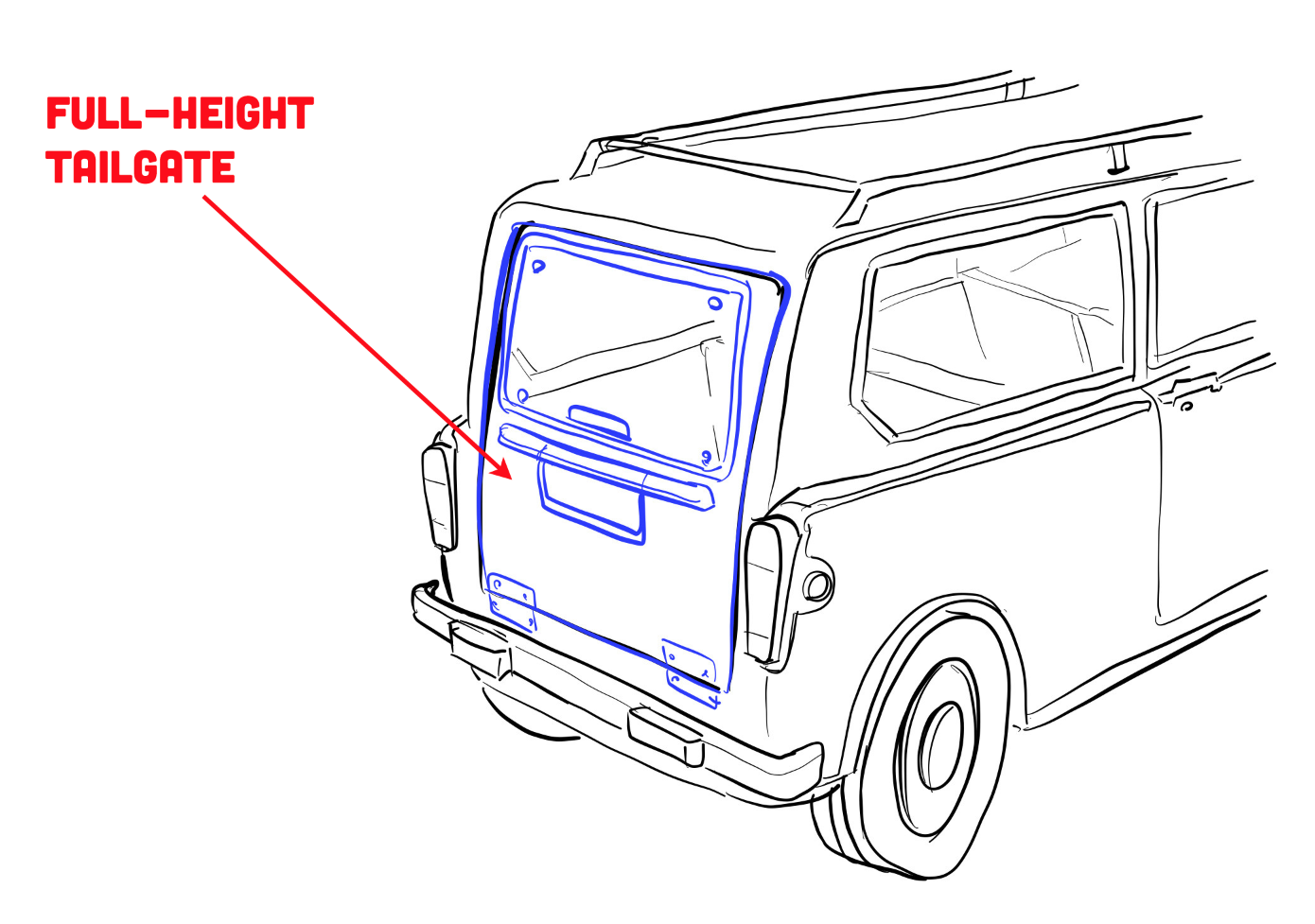 See where I’m going here? It’s a bottom-hinged tailgate, just like normal, but this one extends all the way to the roof. Now, I get that if you’re parallel parked dropping that thing down to drop in some shopping bags could be a pain, but there’s an easy solution for that: 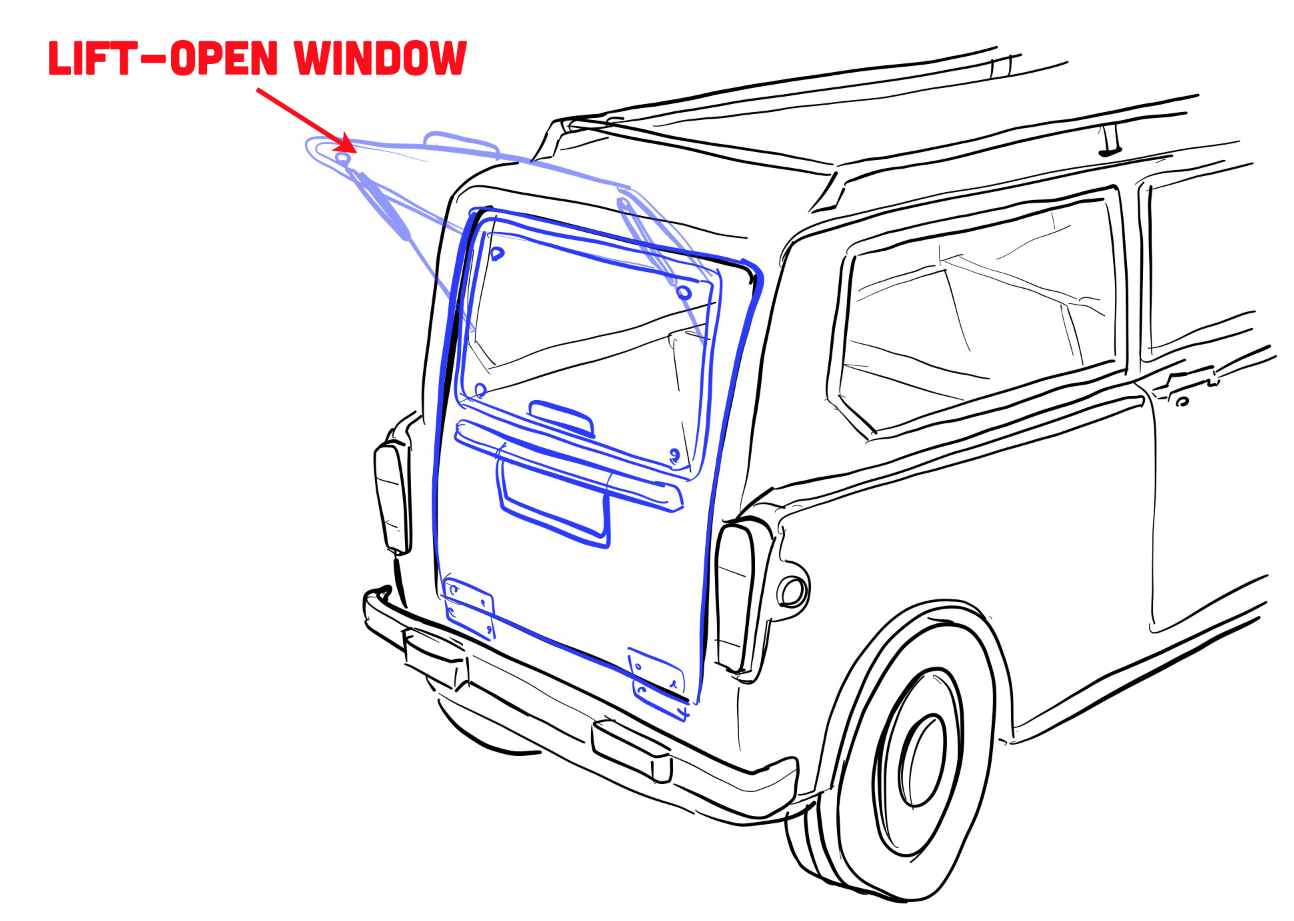 That should solve that nicely; let the window open inside the tailgate to act as a little hatch, just like how it works on conventional half-height tailgates. But let’s get to what’s different now and open the whole damn thing: 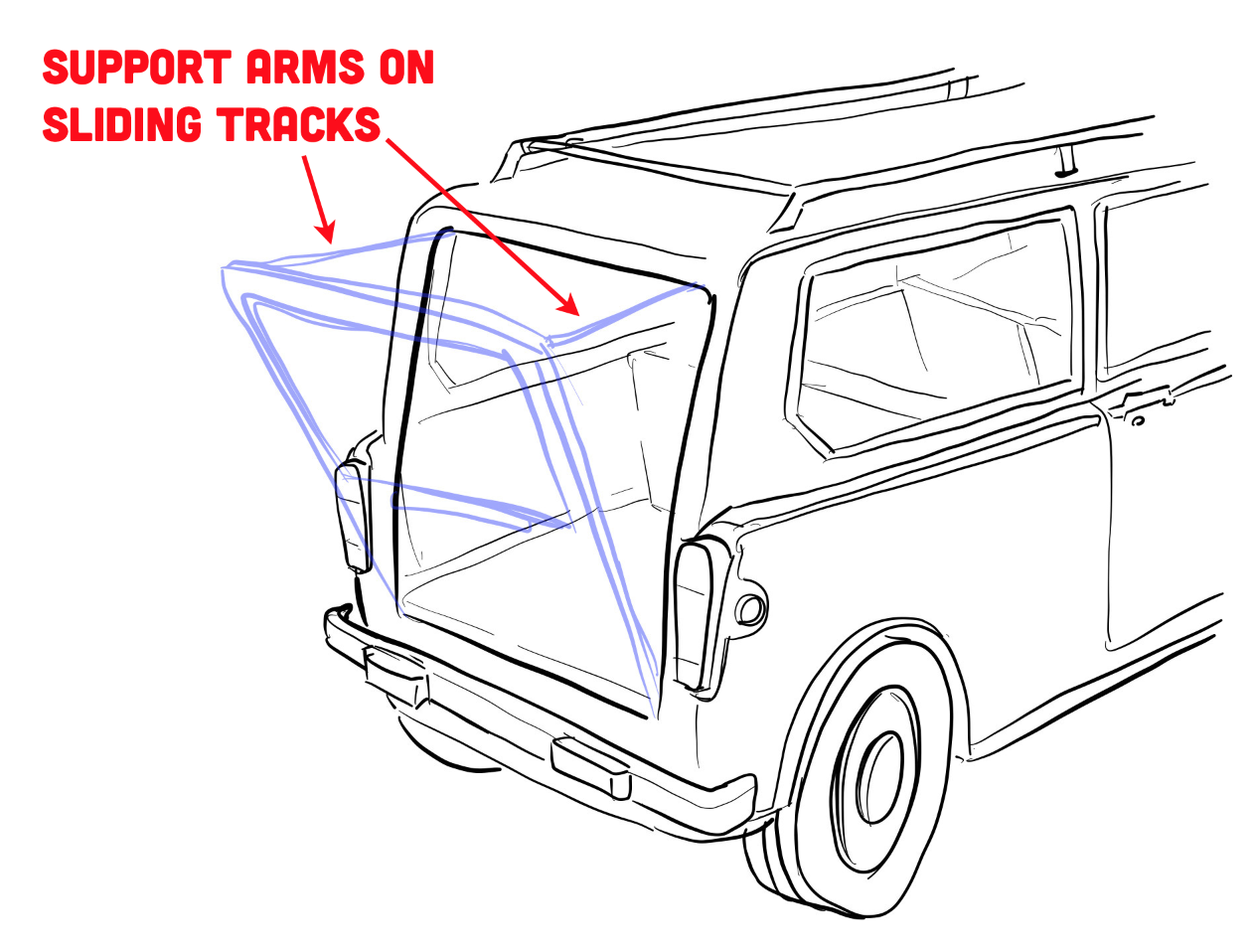 Oh, wait before I open it all the way, let me point out a detail here: those support arms, set into ceiling-mounted tracks. I think we’ll want these because that tailgate will be heavy, and the whole point of it is to support even more weight.

I’m thinking the support arms would be jointed in places, and could be locked into any number of positions on their ceiling-mounted tracks, so you could hold that tailgate open at any angle you want. 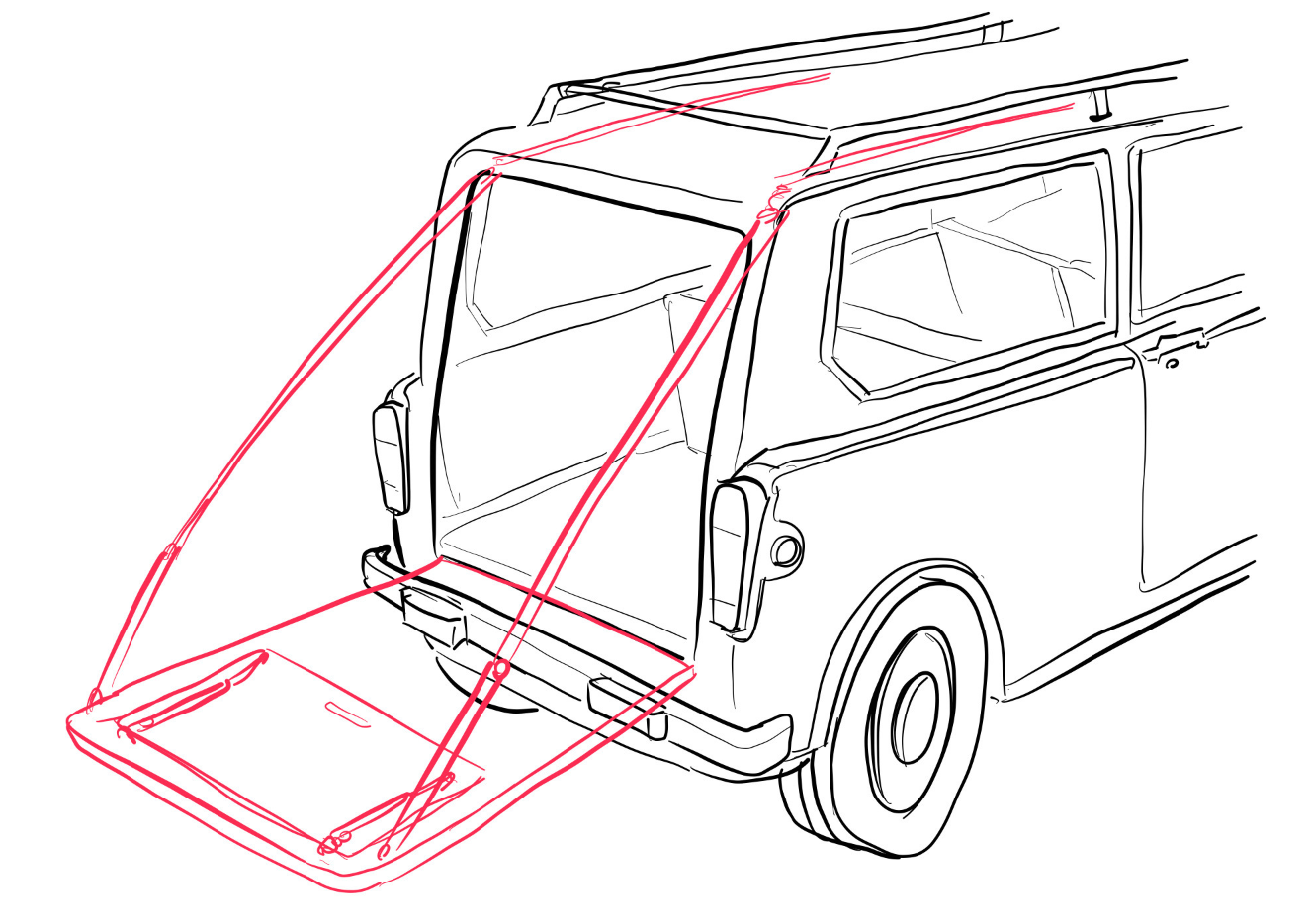 So, here we are in its fully-open position. With those support arms and the length, loading could be tricky? I’m not really sure how tricky, but I do know the inside of the tailgate should be able to have things slid over it easily, which means the way that glass is set in is important. Maybe a flip-down window protector panel would be needed? 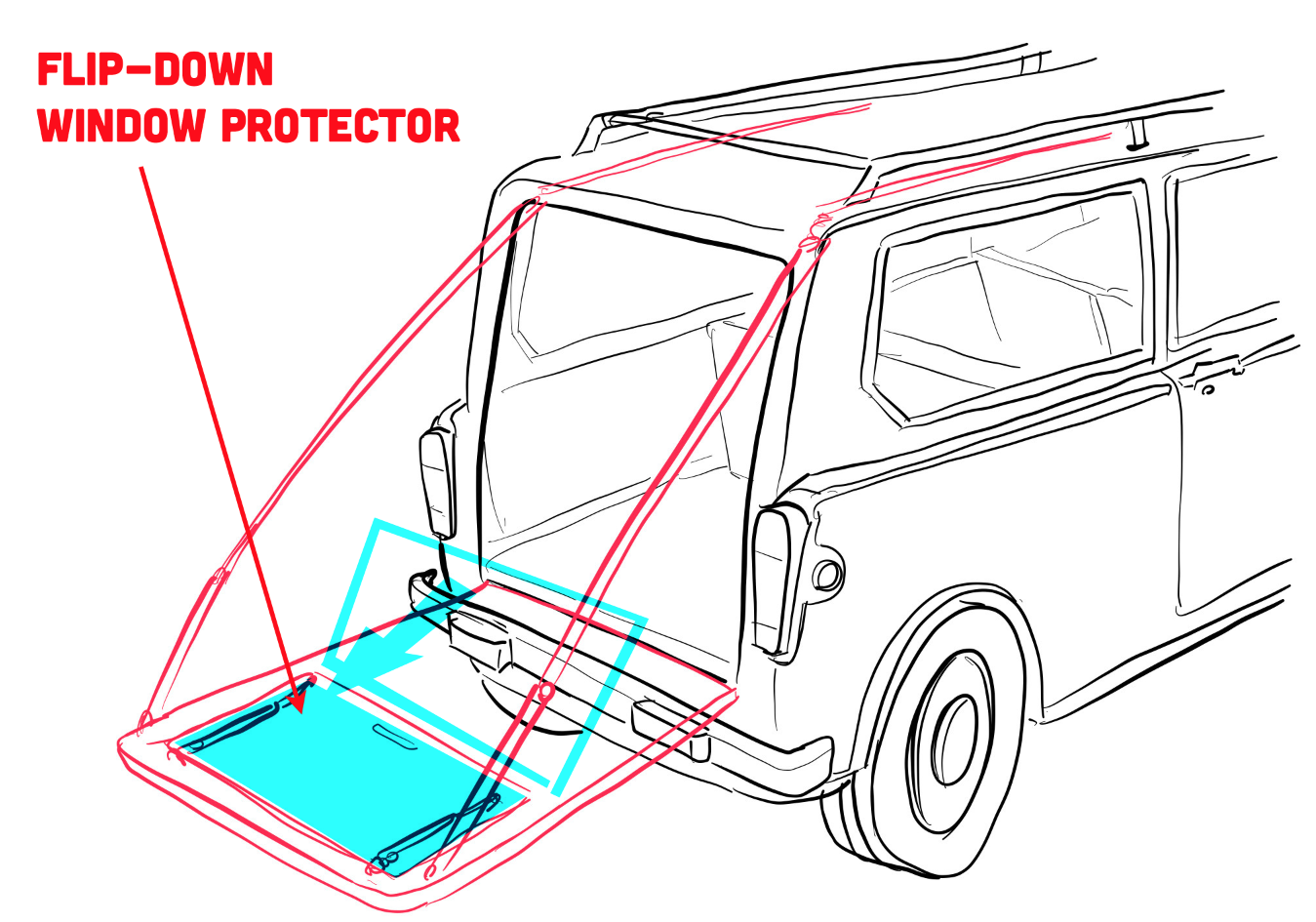 If done properly, this full-height tailgate could pretty significantly increase the cargo-hauling ability of a wagon or SUV, making it into a little pickup bed. Maybe there would be sockets in the tailgate that could allow for some lightweight, possibly canvas, “bedsides” to be installed on the dropped tailgate?

Notice I included a hinged license plate mount there, like on the old Mini.

There’s something appealing about this whole thing, I think, though it’s maybe a bit ungainly, too. But even with that in mind, there could be some real advantages, like it could be used as a good-sized table for working or eating or sitting or sleeping or whatever, with a pair of drop-down legs: 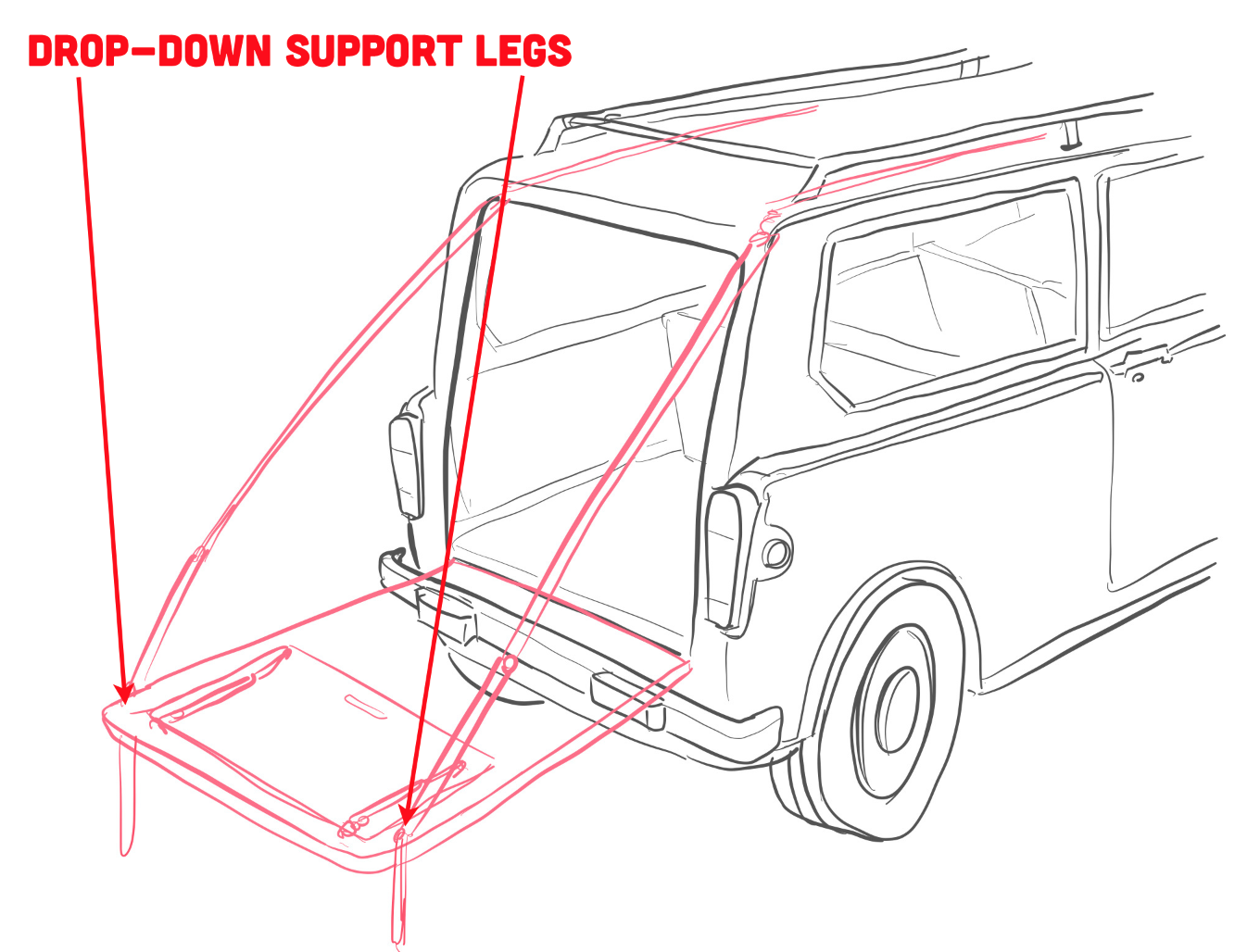 I feel like a big platform like that could be really useful. The legs could be integrated into the rear exterior of the tailgate and could be cool design elements, too, when they’re in the folded position.

Of course, if this would be done right, then that tailgate should be able to be used as an actual ramp, too: 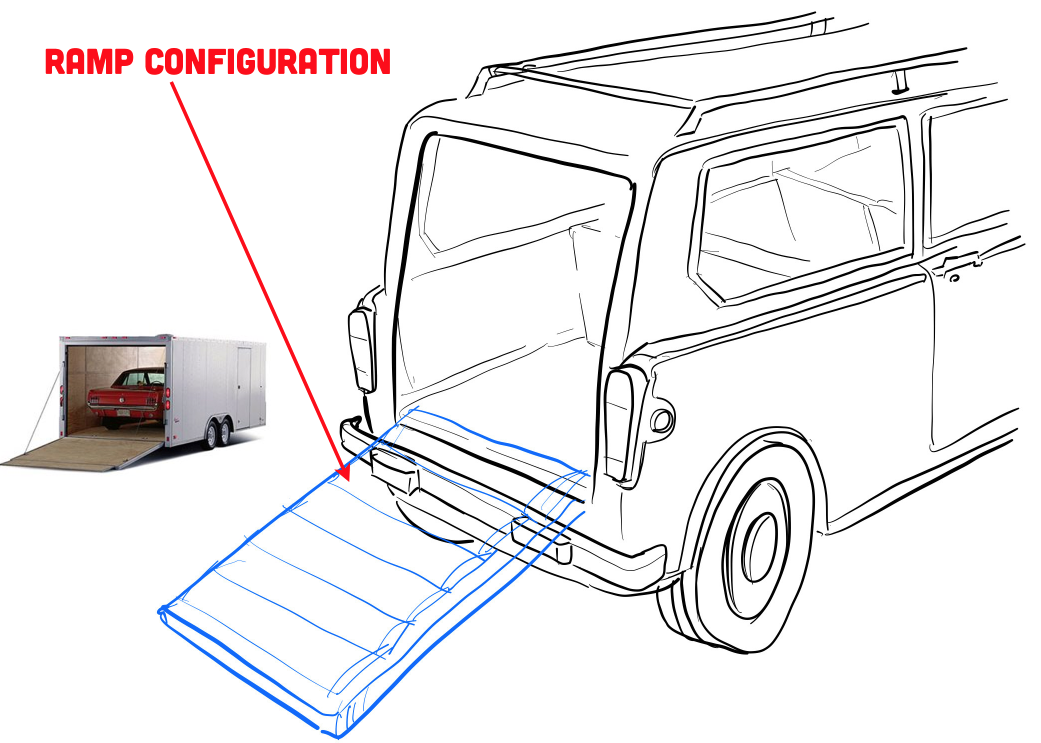 There’d likely need to be some sort of protective/grippy cover you’d unroll to protect the inside of the tailgate, and in this context, you’d disconnect the support arms since the tailgate would rest on the ground. It’d be a lot like one of those enclosed car trailers in design, really.

Without interacting with a full-sized version of this physically, I’m honestly not sure if this is a good or terrible idea. It seems like it could be potentially useful and really expand and transform the utility of a wagon or SUV, but, then again, maybe there’s a reason this has never been tried, at least certainly never on any large consumer scale.

What do you think? Would this be handy? Open up possibilities for you that you don’t currently have? I feel like it’d be a much better way to, say, haul my canoe around while retaining the use of the back seat, or lay out food for a tailgate, or even camping.

Then again, I could just be an idiot. Wouldn’t be the first time.

I'm a co-founder of the Autopian, the site you're on RIGHT NOW! I'm here to talk to you about taillights until you cry and beg me to stop, which I absolutely will not. Sorry. Hug? Also, David's friend.
Read All My Posts »
PrevPreviousHere’s My Final Design Of A Modernized Classic British Roadster: A Car Designer Sketches Your Ideas
NextSelling A Crappy Car To My Landlord Was A Mistake That Continues To Haunt Me Five Years LaterNext