Perhaps one of the most recognizable bits of 1980s automotive history are the Chrysler minivans, the Dodge Caravan, the Chrysler Town and Country, and the Plymouth Voyager. Along with the best-selling but still kinda crappy K-Cars, these vehicles saved Chrysler’s Sizzlean in the 1980s. Chrysler often gets credit for “inventing the minivan” which is richly and comprehensively not true, but Chrysler certainly made a very important minivan. What’s even less generally known is that not only did Chrysler not invent the minivan, but much of the research and development and initial design work was actually done by Ford, not Chrysler, though Chrysler did manage to do one crucial thing that Ford did not: actually build the damn thing. I recently learned some new details of this story, so let’s dig in.

I’d heard about this before, usually in the context of a 1972 project at Ford known as the Carousel. This was a “garagable van” that was built on a chassis derived from Ford’s full-size Econoline vans, and used the Econoline’s V8/rear-wheel drive setup. 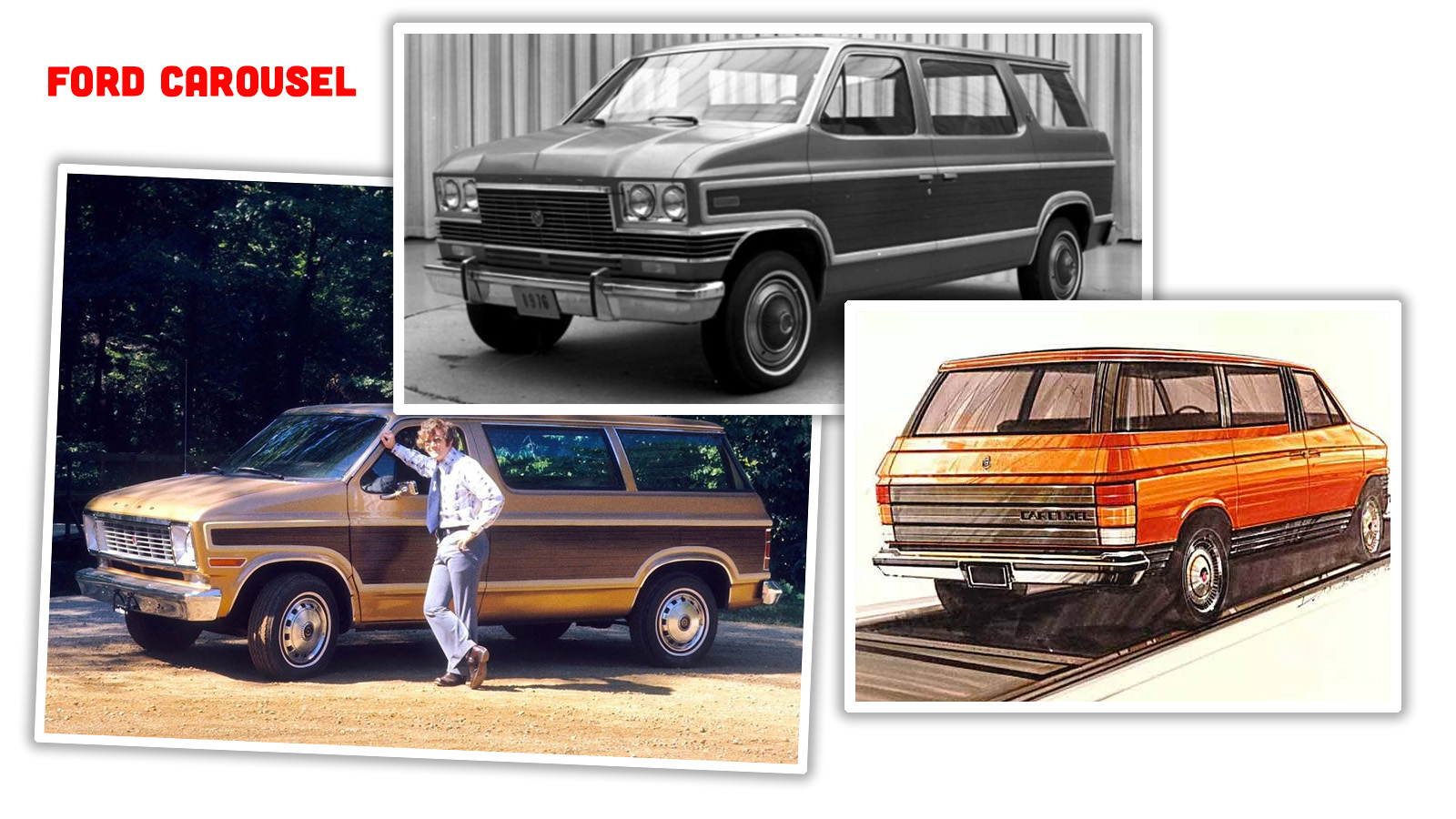 As I’ve usually heard this story told, the Carousel project was led by Lee Iacocca, and was shut down by Ford executives in 1974, partially out of fears that it would cannibalize sales of Ford’s popular Country Squire and other station wagons. When Iacocca was fired from Ford in 1978, he took the general concept with him to Chrysler, where it was developed into the front wheel-drive Chrysler minivans.

So, that’s what I always heard: it started as a RWD smaller van, and it wasn’t until the idea made it to Chrysler that the leap to FWD (and all of its related packaging advantages for a van) came about. But what I’ve now learned is that there was another minivan project at Ford, and this one was far closer to what the Chrysler minivans would be, because this was a smaller, FWD van. It was called the Mini-Max.

I learned about this remarkable missing link from the excellent Car Design Archives  group, as well as from Dean’s Garage. The Mini-Max project seems to have been in operation roughly in parallel with the Carousel, differentiated because the Mini-Max was a much more compact design, and it originated at Ghia studios in Italy, which Ford had bought in 1970.

The designer in charge of the Mini-Max project, Don DeLaRossa, who was also instrumental in the design of the Falcon years before, really believed in the idea of a compact minivan, and pushed the project at Ford enough that four working prototypes were built.

Three of the prototypes were based on Ford of Germany’s FWD Fiesta platform: the 1973, Mini-Max I, the 1975 Bobcat Cheetah Fox Van, and then the 1974 Mini-Max II. A 1976 Mini-Max III was built on a Pinto platform, perhaps re-worked to be FWD? It’s not exactly clear.

The body design was a bit divergent from what we understand minivans in terms of doors, as these were essentially two-door wagons, with no sliding rear doors. Let’s take a look at these four Mini-Max vehicles, because they’re fascinating: 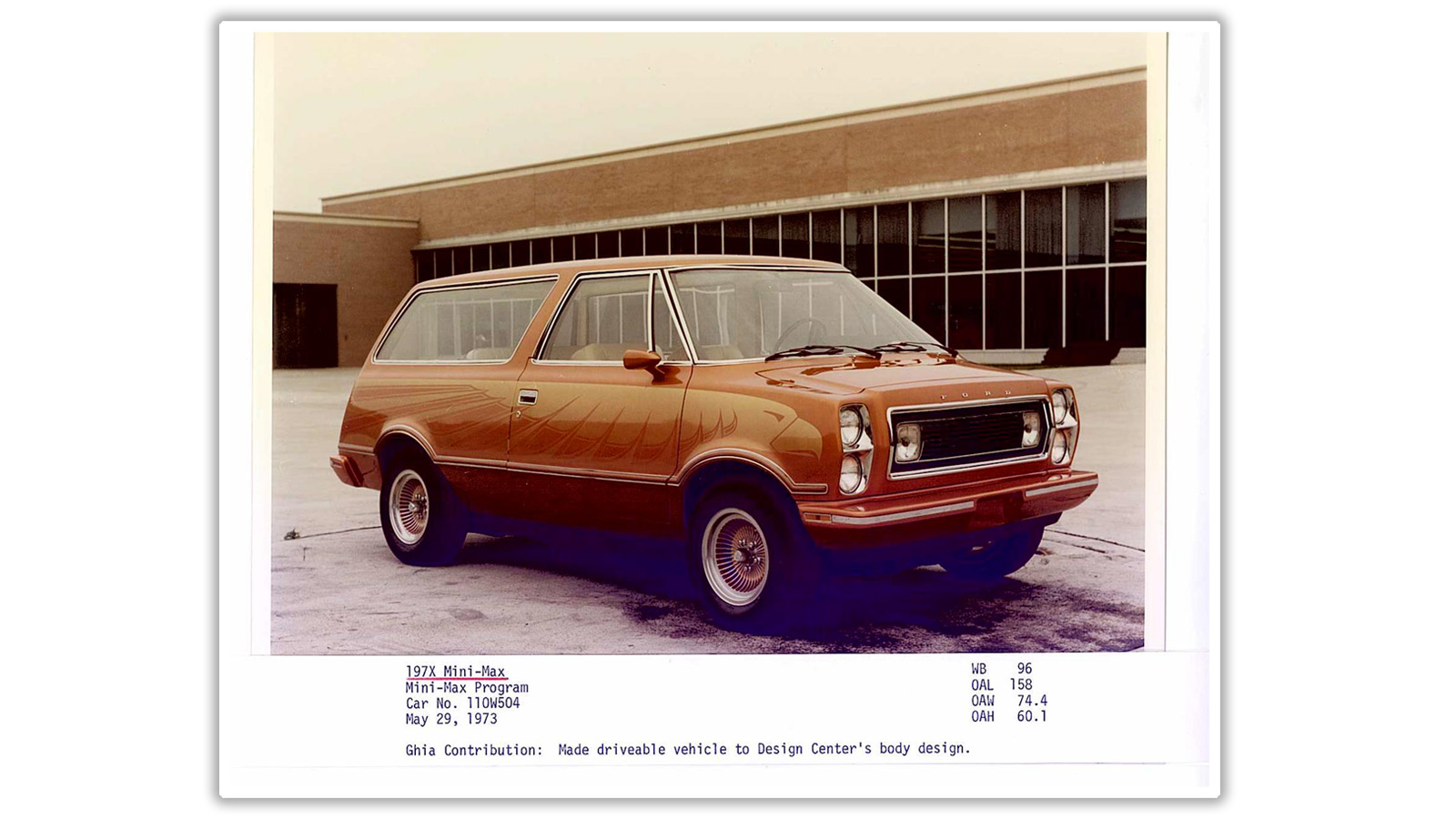 Here’s the first, the 1973 one, and you can see lots of 1970s Ford styling cues in there, especially the front end, which has a lot of Mustang II in it, especially with those body-colored plastic bumpers with the silvery trim strips inset into them. More importantly, though, is that eagle graphic along the side! Holy crap, that’s cool. Why didn’t that trend catch on for minivans? Nobody would be calling them soccer mom cars if they had huge birds of prey screaming down their sides! 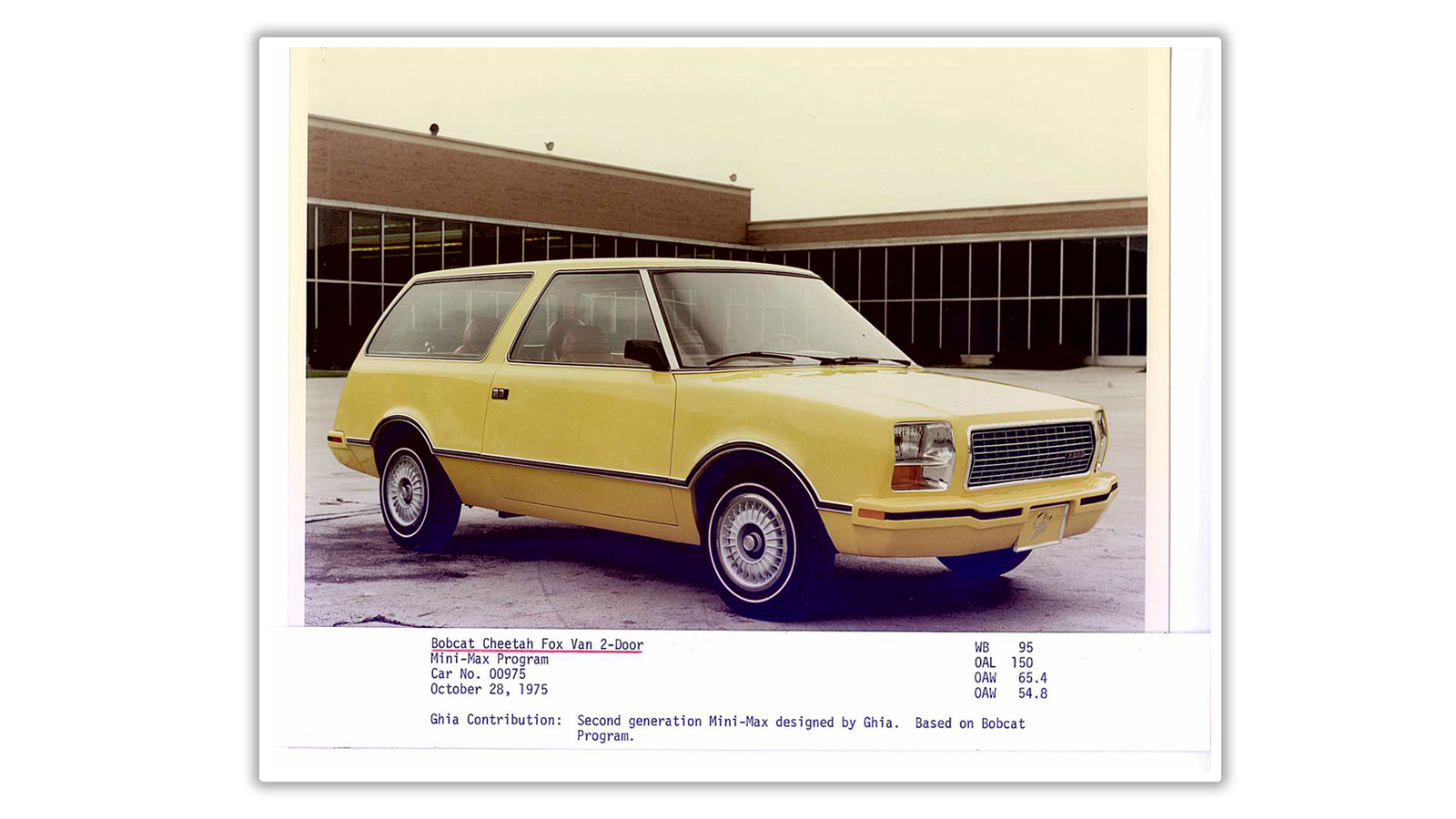 The styling is clearly pushing into Ford’s 1980s design language, with the rectangular headlamps and the overall more crisp, rectilinear style. It’s very tidy and clean, with a lot of window area. 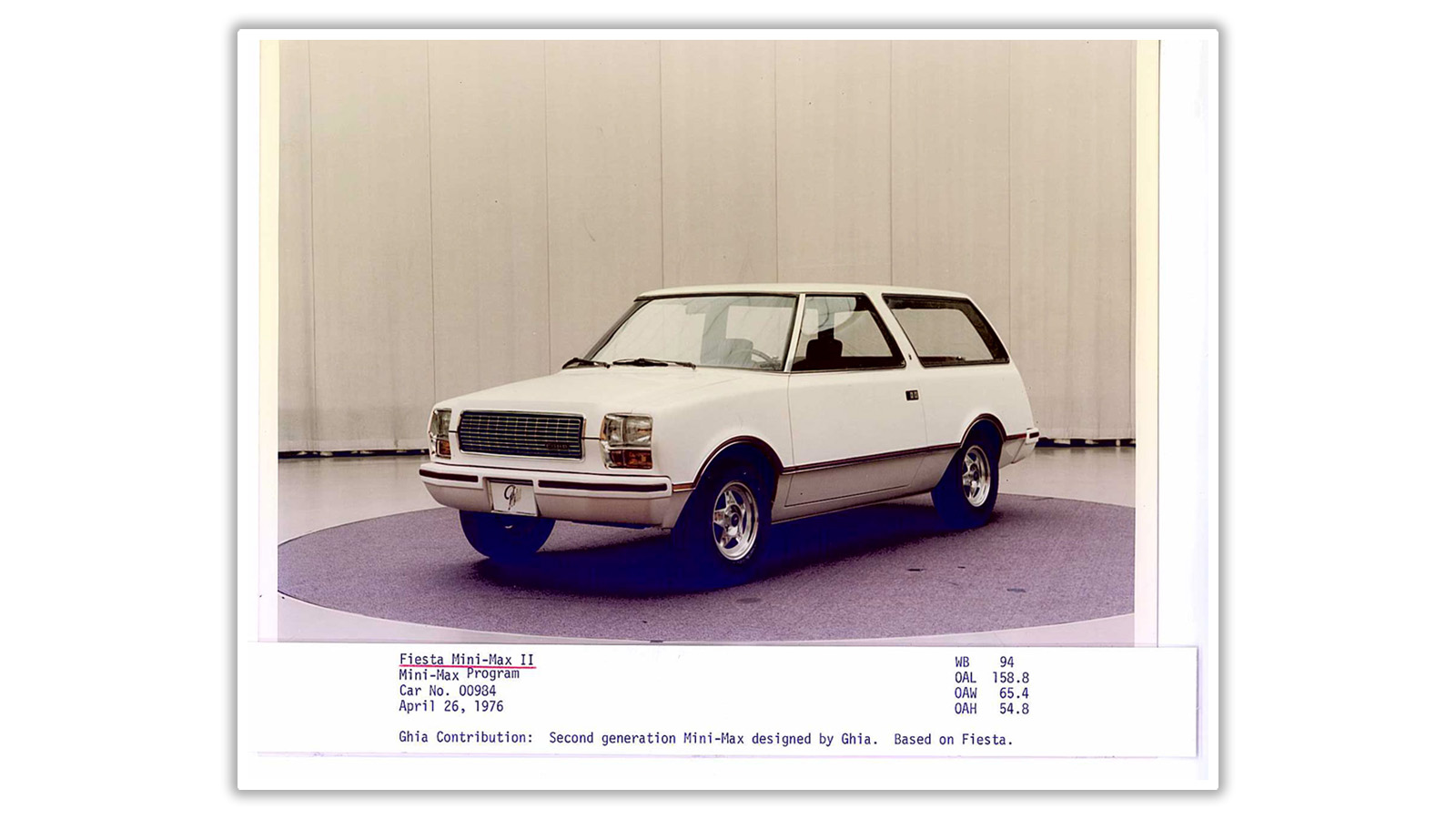 Another Fiesta-based Mini-Max II was built in 1976, with essentially the same basic styling as the 1975 Bobcat Cheetah Fox one, but with some tweaks, like a simplified front bumper. 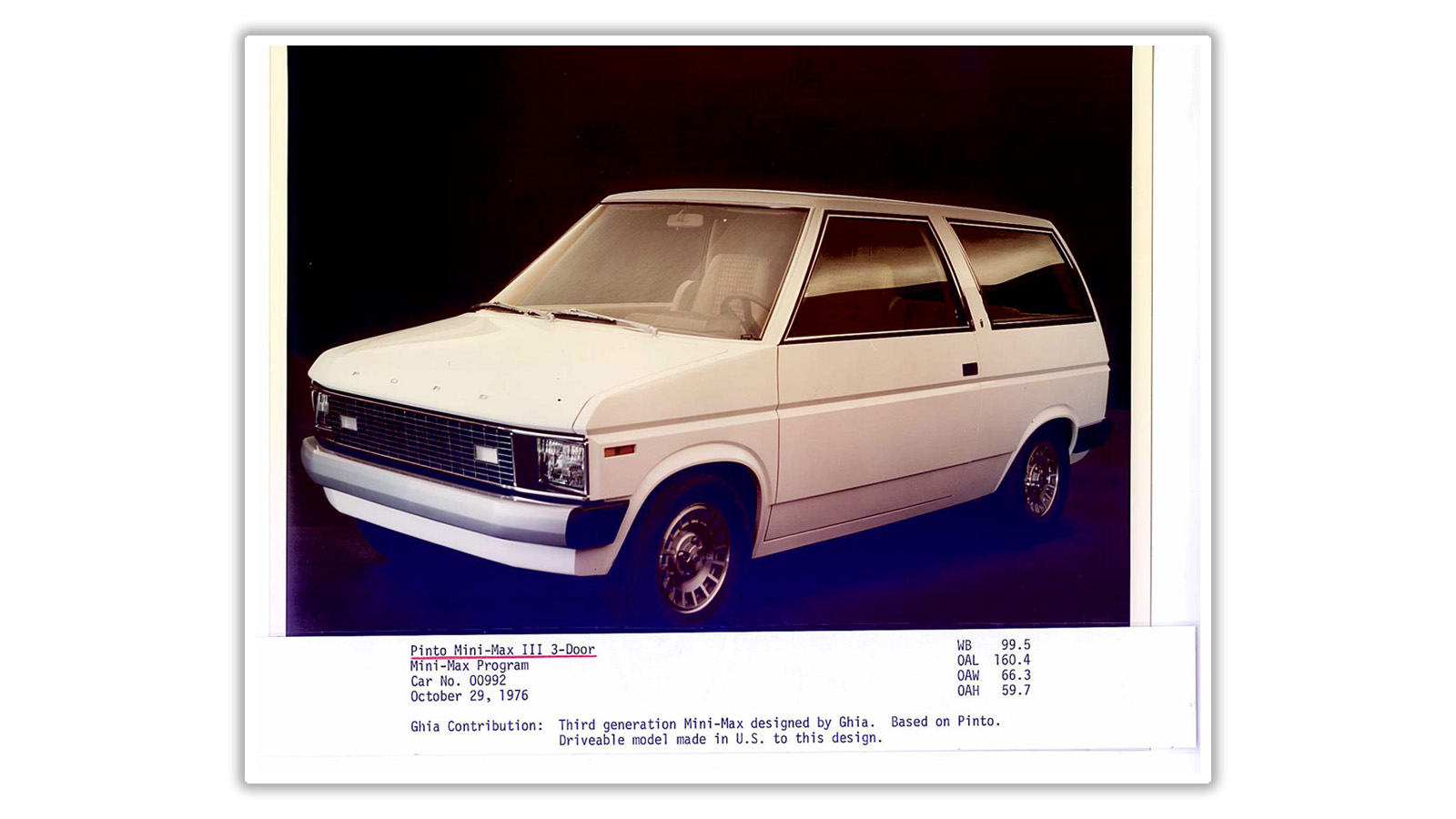 This third version, also from 1976, is the Pinto-associated one, though looking at it, I can’t help but think the Pinto designation was for branding purposes only, as that short hood really suggests a transverse engine layout like on the Fiesta. The overall styling here is very much predicting 1980s auto design: rectangular headlamps, full-width grille, minimal chrome trim, crisp character lines, sharp corners, and bumpers with black rubber end caps.

The benefits of the FWD layout can be appreciated really well here, as there’s pictures of the cargo area of the Mini-Max III: 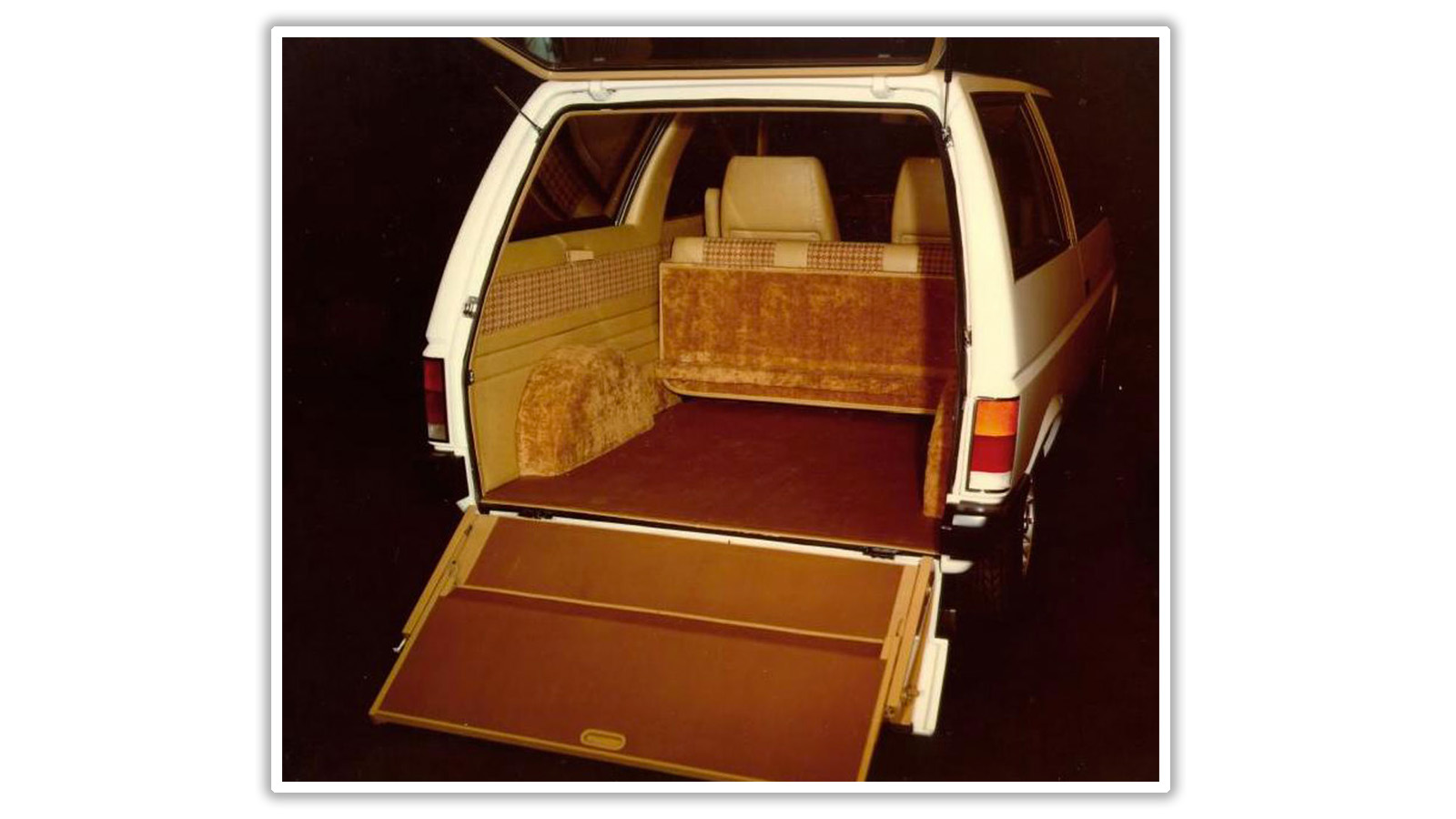 Look at all that space, and that gloriously flat floor! Plus, we have an interesting hatch-and-tailgate layout, and that tailgate even seems to have an extendible ramp! This is a very practical design. 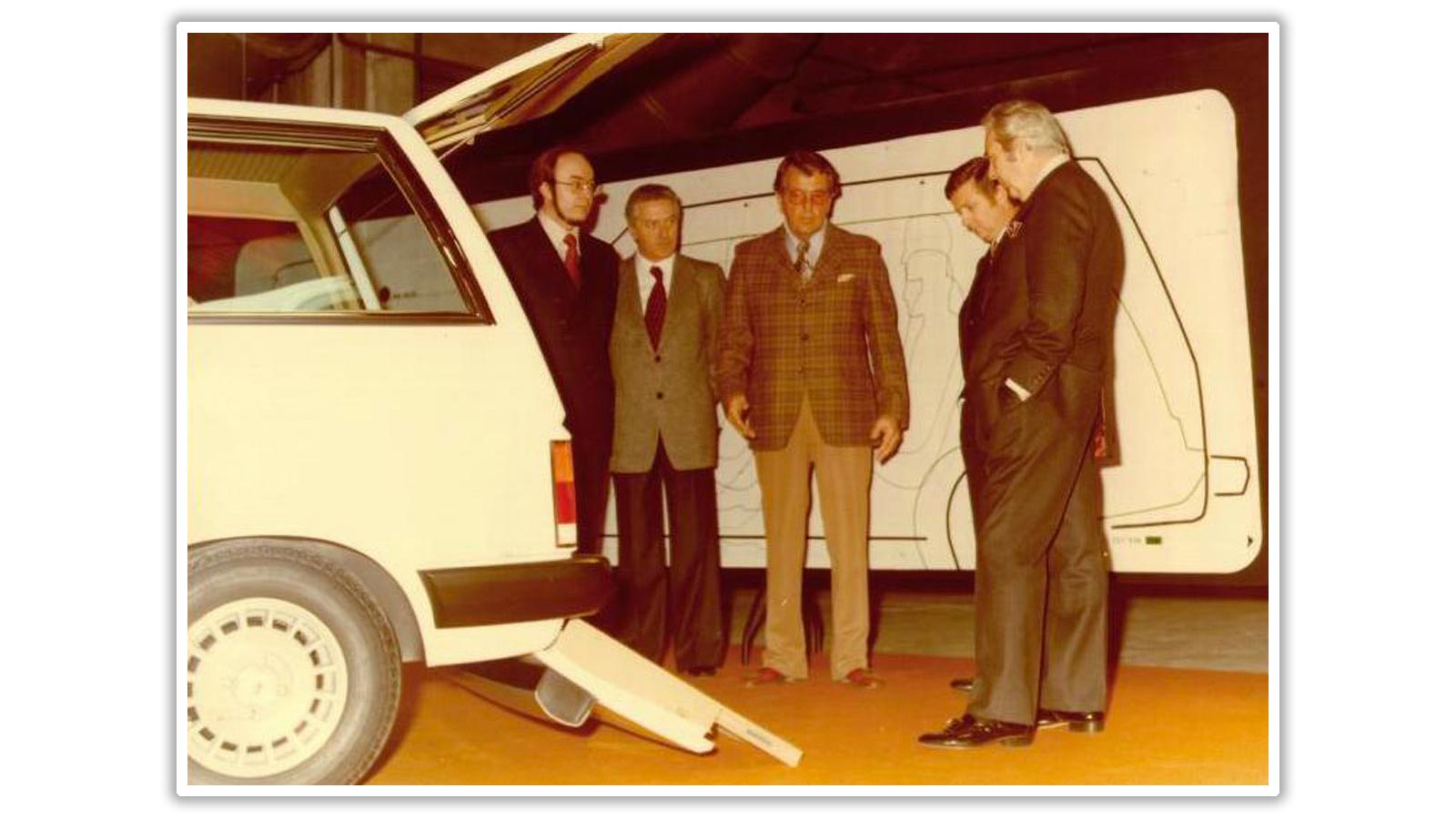 You can get a sense of the scale of it here, with ’70s Abraham Lincoln and his friends there standing behind the car. It was quite tall, definitely not a small wagon, but still much more compact than vans of the era. A genuine minivan, even if it only had two doors. 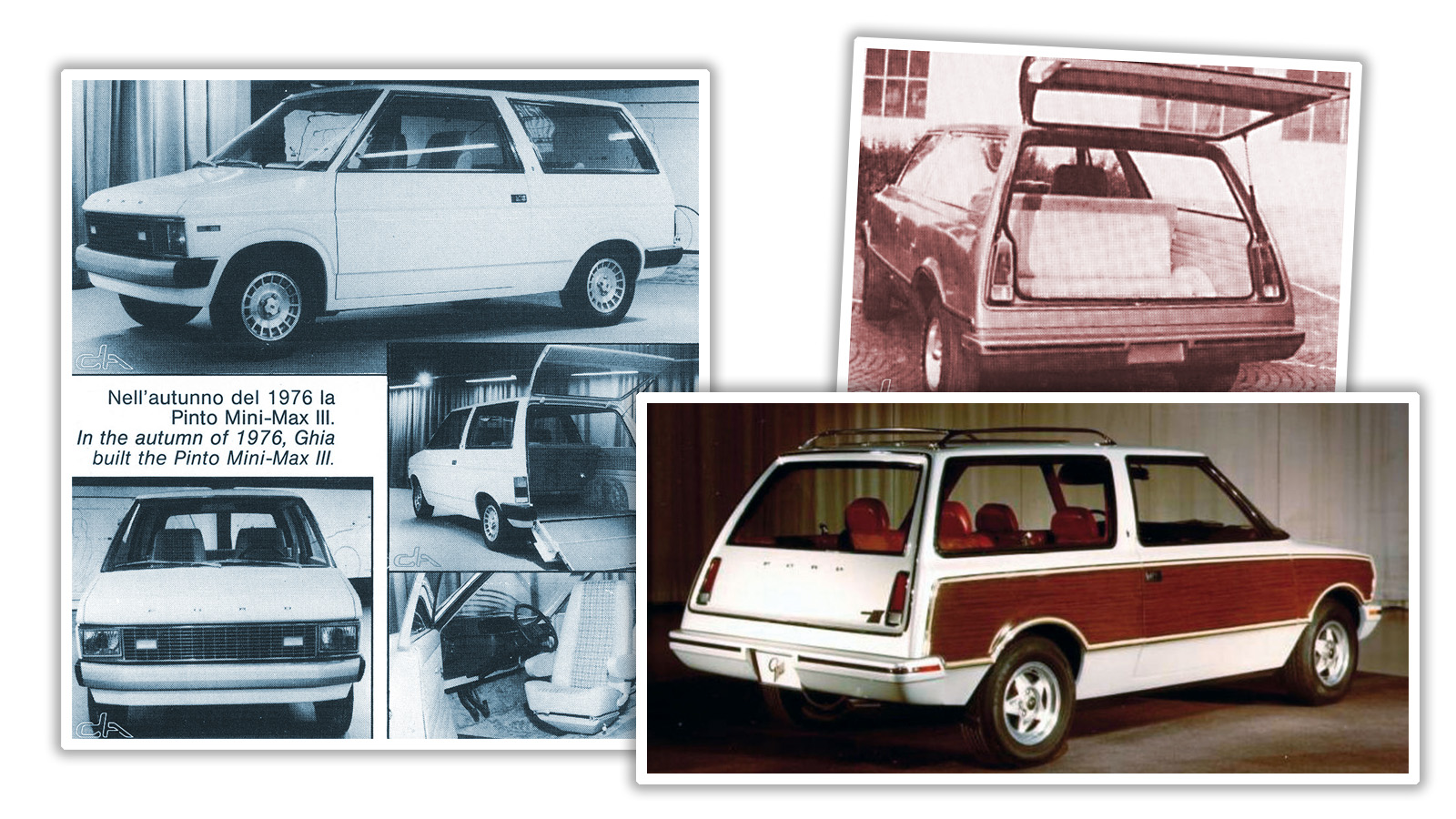 I think the white 1976  Mini-Max II had wood paneling on one side, and it does look pretty good on there. Also notable is that the MiniMax II seemed to have a third row, rear-facing jump seat, and the taillights were visible through the tailgate via holes! It’s sort of like how the early Mini Clubman wagons had their taillights visible via holes in the door hinge areas.

The Mini-Max met the same fate as the Carousel project, in this case killed by none other than Henry Ford II, who liked neither compact cars or FWD.

When Iacocca went to Chrysler in 1978, he took designer DeLaRossa with him, and DeLaRossa in turn took with him the ideas and it seems drawings of the Mini-Max, which he regarded as a huge missed opportunity for Ford. In fact, according to Car Design Archives, at least one of the prototypes made it to Chrysler, as DeLaRossa  made a point “to avoid their destruction, he discreetly has all these concepts transferred to a Detroit drug warehouse.” A drug warehouse? This could be a translation issue, but it’s certainly a hell of a story.

The result of all of this is that when Iacocca and his team ended up at Chrysler, they came armed with about a decade’s worth of research and development about minivans, and not just the bigger, RWD-style vans like the Carousel, as I had always thought, but FWD minivans from the Mini-Max project, which very directly were applicable to the sort of K-Car FWD-based van Chrysler would start selling in 1983.

I don’t think I’ve ever quite realized just what an amazing deal Chrysler got with Iacocca and his team. No wonder the Chrysler Minivans were such a success; they were standing on the shoulders of mini-giants.

I'm a co-founder of the Autopian, the site you're on RIGHT NOW! I'm here to talk to you about taillights until you cry and beg me to stop, which I absolutely will not. Sorry. Hug? Also, David's friend.
Read All My Posts »
PrevPreviousGet Your Sketchy On With The Hop Rod, A Gloriously Insane Combustion-Powered Pogo Stick
NextI Saw Even More Incredible Trains And Rode In A Gorgeous Stainless Steel Art Deco StreamlinerNext