It’s strange how certain automotive ideas seem to be oddly eternal. The rear-engined box-on-wheels style of commercial vehicle, best known in its form as the VW Microbus, seems to be one of these ideas. I feel like every time I’ve found out about some other variation on this type of vehicle (and I’m not even counting this design concept in use as passenger buses) there’s some other variant lurking around, waiting to be re-discovered. This time, the VW Bus ancestor goes by the heroic-sounding name White Horse. It’s made by White, the sewing machine company that diversified to cars and trucks, so I’m not sure if the actual name is White White Horse or if the model name is just Horse and it’s just usually called by both maker and model names? It’s not clear. But it is very cool, so let me tell you about it. 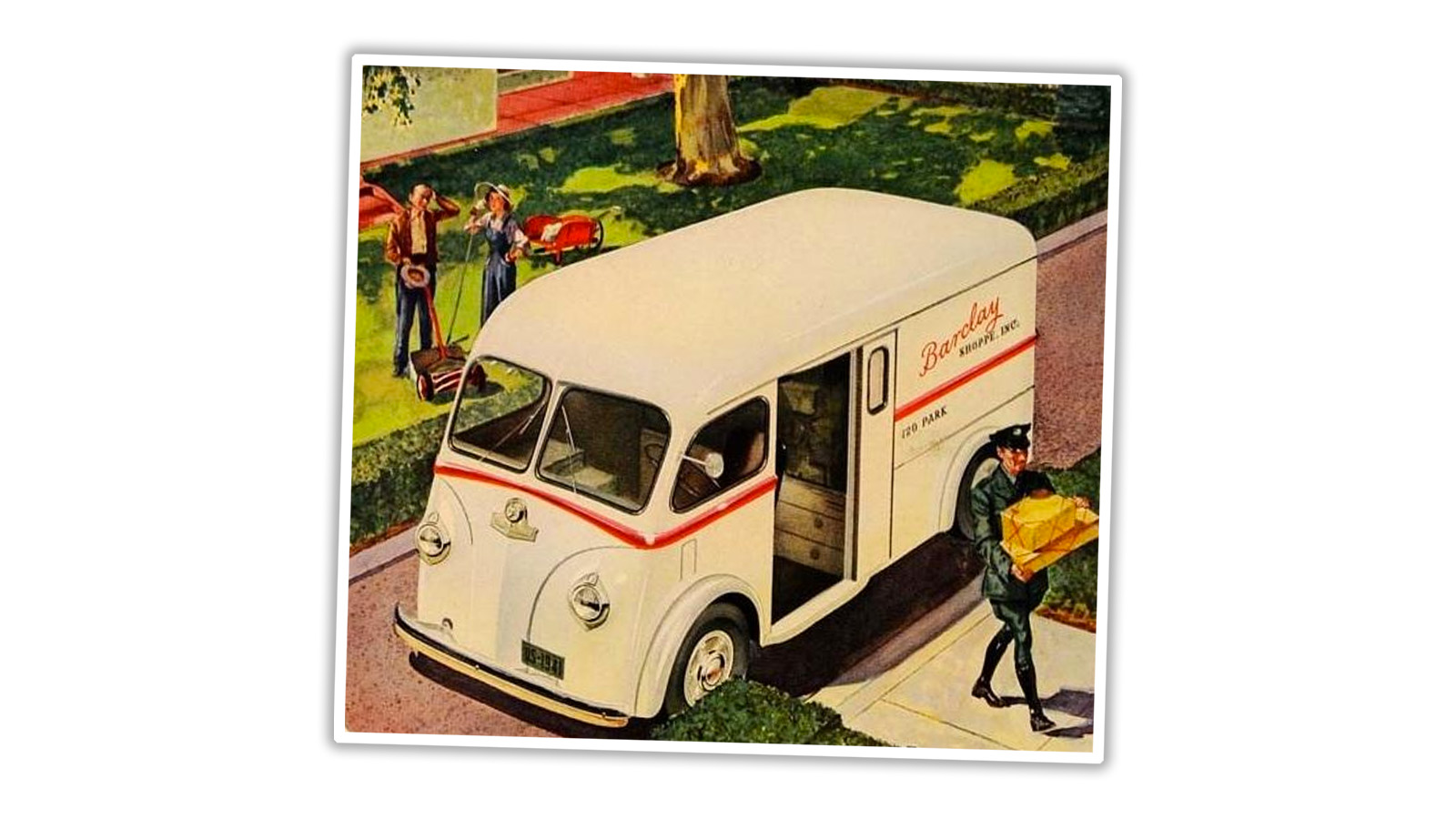 Man, design-wise, it even kind of looks like the VW Type 2, with that prominent front V-shape there between the headlights.

Now, the White Horse, which seems to have been built between 1939 and 1941, certainly isn’t the first rear-engined box-like delivery van – I’ve written about one before that dates from 1926, the Stutz Pak-Age-Car. And while the Pak-Age-Car was a rear-engined box on wheels like the VW Microbus was, the (easily removable!) drivetrain of that van was still a pretty conventional liquid-cooled inline engine of the era.

What makes the White Horse especially exciting is that it used an air-cooled flat-four engine, exactly like the VW Type 2 would use a bit over a decade later. This engine came from Franklin, an early American pioneer of air-cooled engines, and the fact that this horizontally-opposed air-cooled engine was used in a motor vehicle kinda kills the persistent common wisdom that the Chevrolet Corvair was America’s only horizontally-opposed rear-engined air-cooled car ever built. 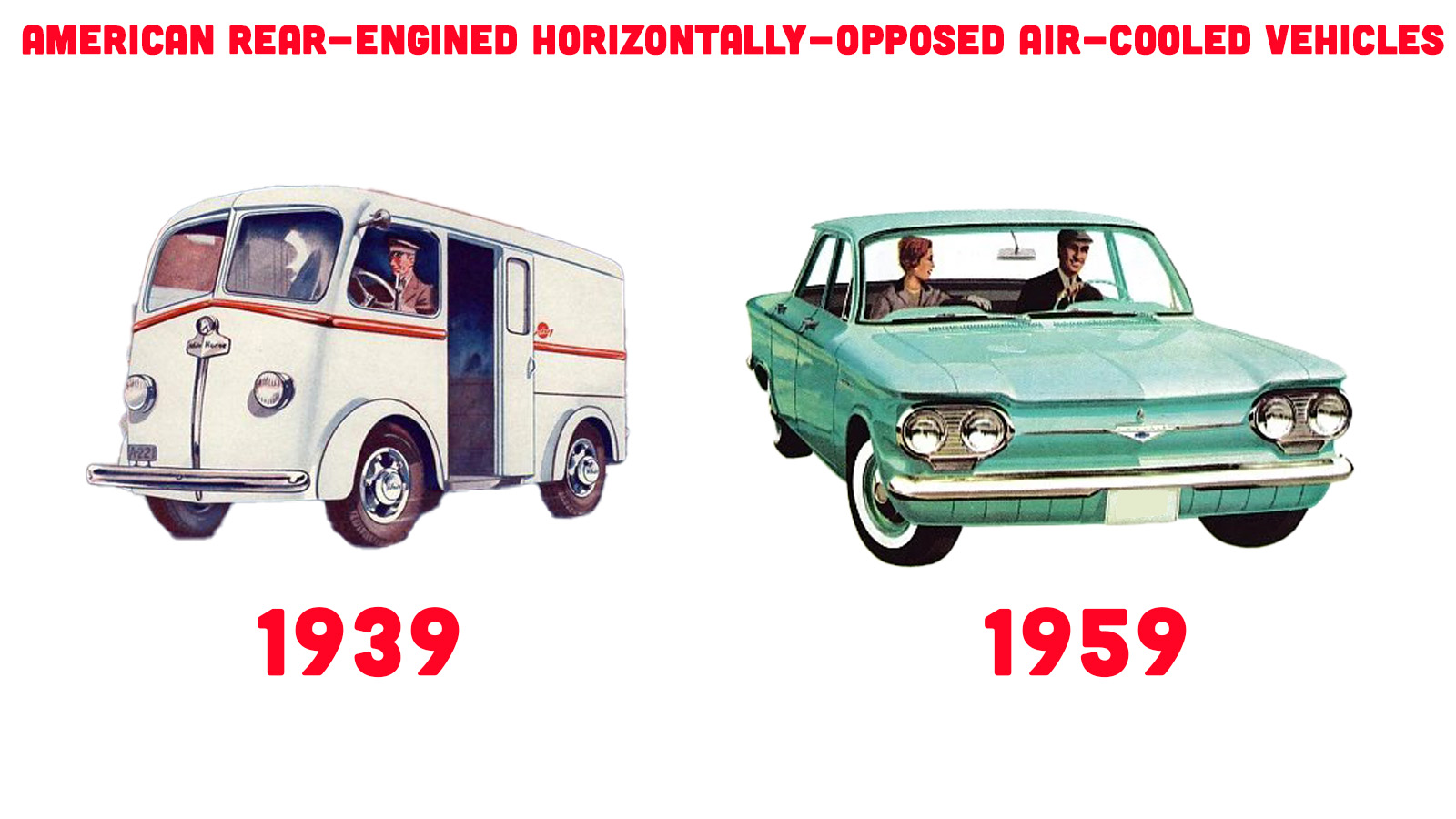 What’s interesting is that this fact – being America’s only rear-engined, air-cooled vehicle – is crowed about prominently in White’s ads of the era: 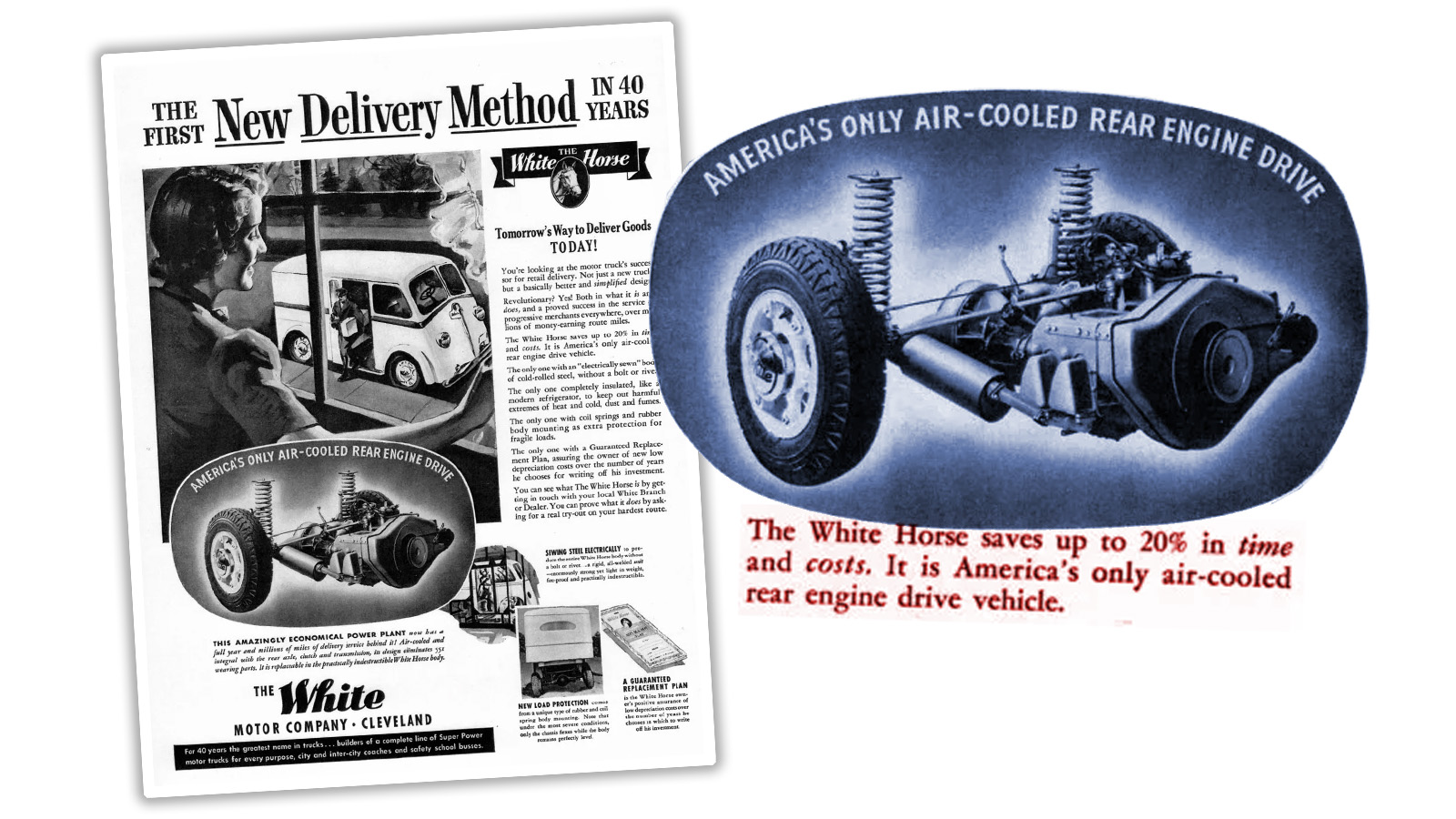 I think this is interesting because it reveals something I think we’ve generally forgotten: that, at one time, rear-engines and air-cooling were seen as The Future. This ad pre-dates Corvairs by a long shot and even Volkswagen Beetles (design finished in 1938, but Americans wouldn’t really even be aware they existed until, say, 1945 or so) which, along with early Porsches, were by far the most common examples the American audience targeted by this ad would have – eventually – of air-cooled rear-engine cars. So this is still well into the era where rear engines and air-cooling were the stuff of speculation. And yet that’s what this humble milk van used.

It was also a unibody vehicle (the ad describes it as being “electrically sewn”, appropriate for a sewing machine company) which was also pretty cutting edge, first pioneered by the Lancia Lambda in 1922 but only barely entering more widespread use in the late 1930s, and a bit more widespread use in the 1940s primarily via cars built by Nash. For a delivery van, this was some pretty out-there stuff.

The drivetrain layout is a bit different from the VW Bus and Corvair-style layout in that the engine is ahead of the rear axle, and drives a differential on a live axle via a short driveshaft. On the VW and Chevy, the engine is behind the rear axle and drives the wheels via a transaxle and a pair of swing axles, or, later, double-CV rear axles.

The White Horse Layout is a little confusing for me, at least based on the pictures I’ve seen. Specifically, where is the transmission? I assume it has to be behind the engine – which has a nice shrouded fan and separate heads for each cylinder, revealing its aircraft engine origins – but there hardly looks like there’s any room for a transmission between the engine and that differential. 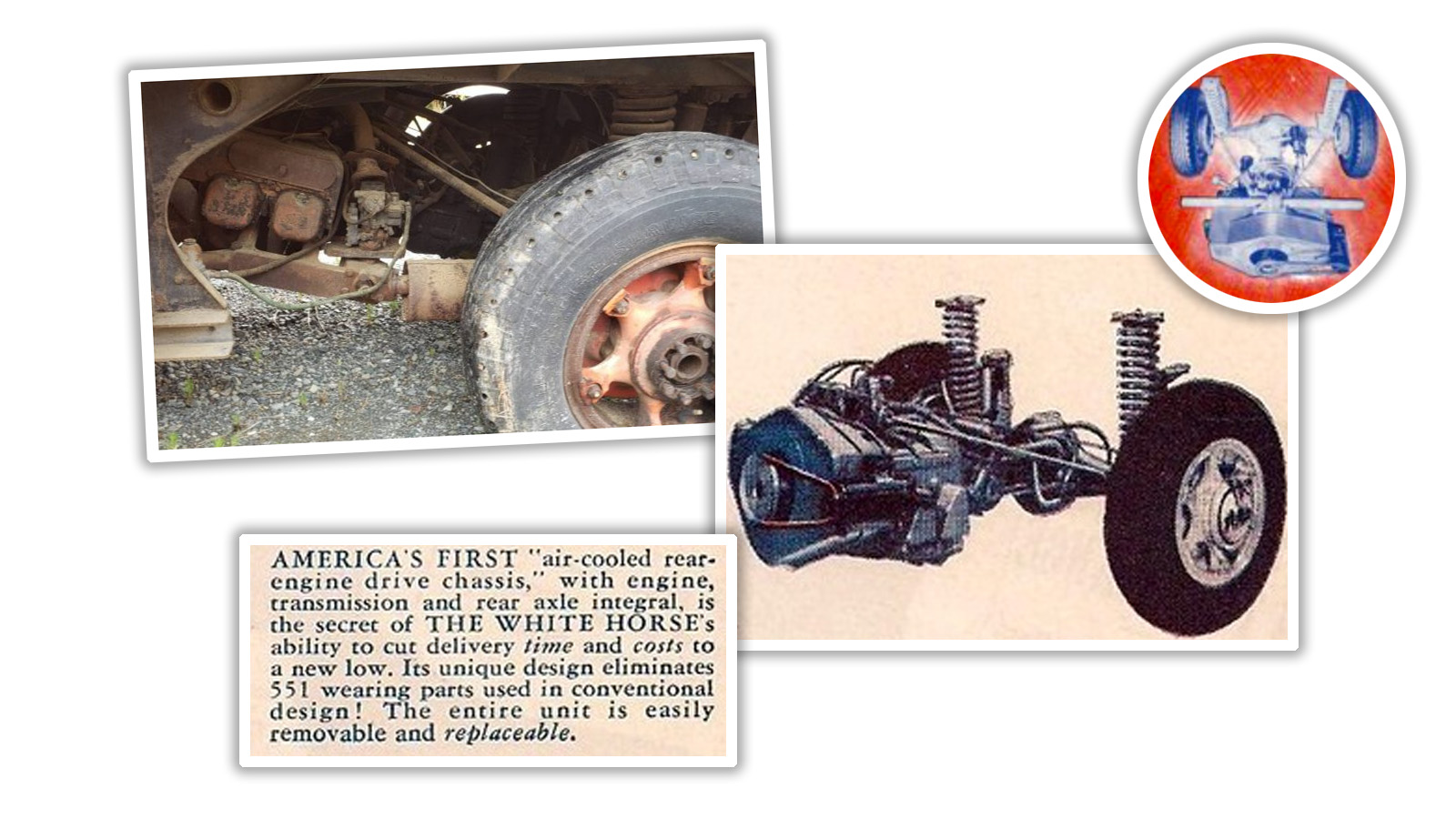 Okay, now that I look at it a bit more, I guess I can see where the transmission goes there, but it’s still very compact. Granted, this thing only did about 45 mph for a top speed, so it’s not like the transmission had to be full of gears – I suspect it was a three speed manual – so I guess it can be a tidy little box of gears sandwiched in back there.

Also interesting is the use of coil springs in what was a very leaf-spring-heavy era. It also seems that the whole drivetrain was designed to be easily removed and replaced, like the Pak-Age-Car before it, with the engine seeming to have a mount at its front end and the pair of coil springs supporting the back. 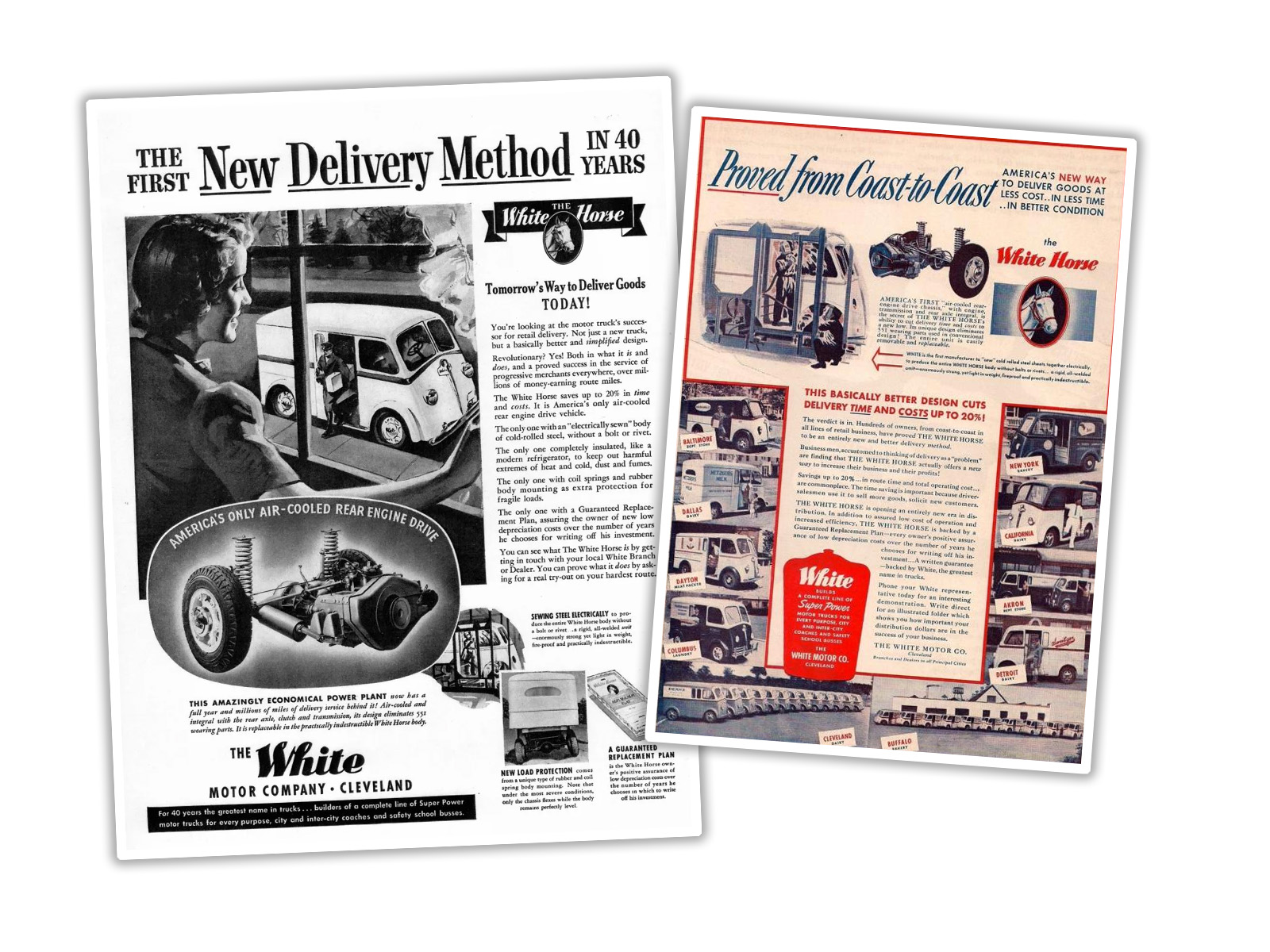 The White Horse is one of many horse-named vehicles, but I think it’s also one of the few– maybe the only? – to have its horse logo be simply the horse’s head, as though the horse was posing for his passport photo.

Also interesting is that even during the short run of this van, they couldn’t seem to be able to decide just what picture of that white horse should be the logo; was the one with the horse looking coquettishly down a bit too suggestive? Was the one with the horse facing boldly to the right too intimidating? Bridled, or naked and free? So many options. 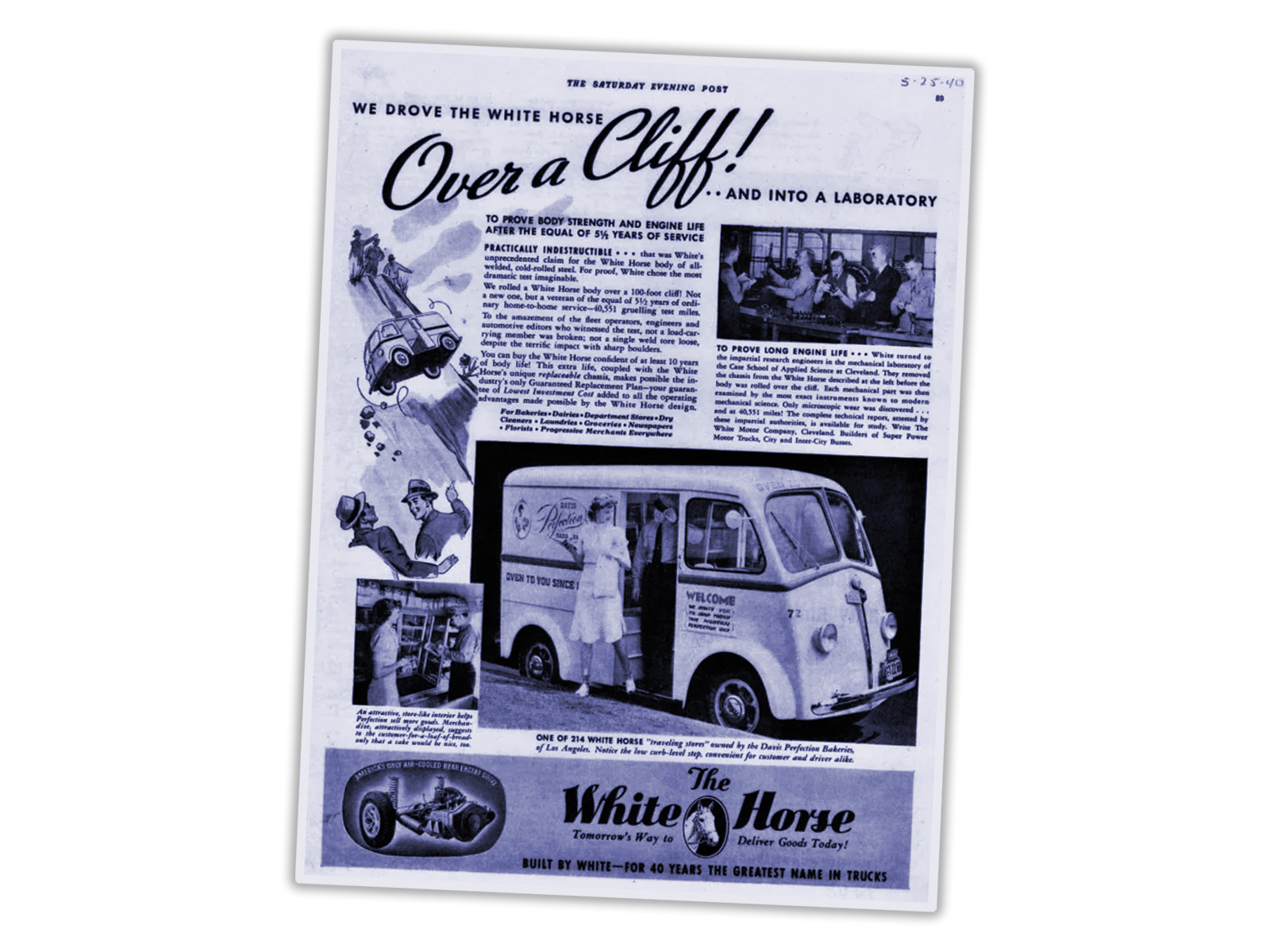 For a commercial vehicle, the White Horse seemed to enjoy a pretty exuberant mass-media advertising campaign, with many ads in major publications like The Saturday Evening Post, and ads that talked about exciting things like driving one of these bread vans off a cliff, as you can see above.

I really like these guys in the ad, seemingly absolutely thrilled to watch this thing tumble down: 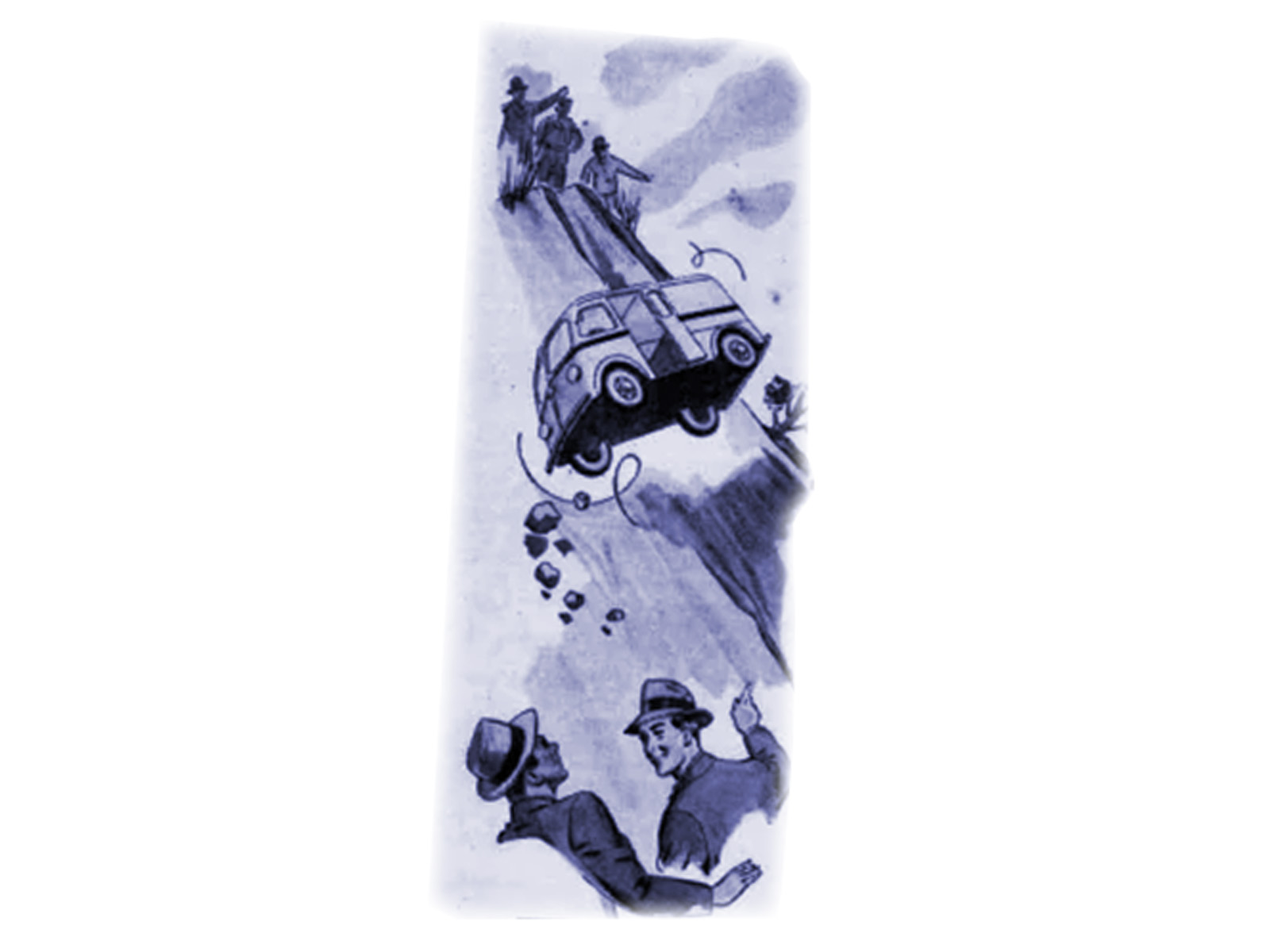 Remember, this was still pre-huge-budget-action-movie-era, so you can’t blame these guys from really getting all they could out of a good van cliff-dive.

I suspect the White Horse had a short production run because of the start of WWII, which would have halted most domestic commercial civilian van production. The White Horse is mostly forgotten now, and there’s maybe a dozen or so examples left – sometimes they still pop up for sale – but I don’t think generally they get the credit they deserve for being what seems to be America’s first mass-produced air-cooled, rear-engined, horizontally-opposed vehicle, despite what those Corvair mavens tell you.

I'm a co-founder of the Autopian, the site you're on RIGHT NOW! I'm here to talk to you about taillights until you cry and beg me to stop, which I absolutely will not. Sorry. Hug? Also, David's friend.
Read All My Posts »
PrevPreviousThe Pagani Utopia Is A V12-Powered, Manually-Shifted Masterpiece
NextI Saw Some Hilarious And Genius Custom Cars At The Missouri Gambler 500Next