Over the weekend I took my broken Volkswagen Touareg and drove it nine hours southwest into Missouri. There, I met a bunch of strangers for a mostly off-road trail cleanup and endurance rally around the state. This Gambler 500 was some of the most fun that I’ve ever had in a car, and part of it is because of the wild vehicles everyone else brought.

I have a full story on this event coming soon, because it was just that memorable of an experience. I’ve written about the Gambler 500 a lot, but this one was different. Nobody set cars on fire and drunken debauchery didn’t result in anyone having to get airlifted to a hospital. I would even say that it was kid-friendly. It was a different take on a familiar formula, and it was amazing.

For this one, we’re trying something a bit different where we give you something bite-sized before giving you the full meal. I promise that I’ll have that real soon, but for now, let’s take a look at some cars!

On Friday afternoon, I wrote and published my deepest and darkest hot take about Chris Bangle’s influence on BMW’s future. Then, I threw some tools and gear into my 2005 Volkswagen Touareg VR6 then took off for southern Missouri. 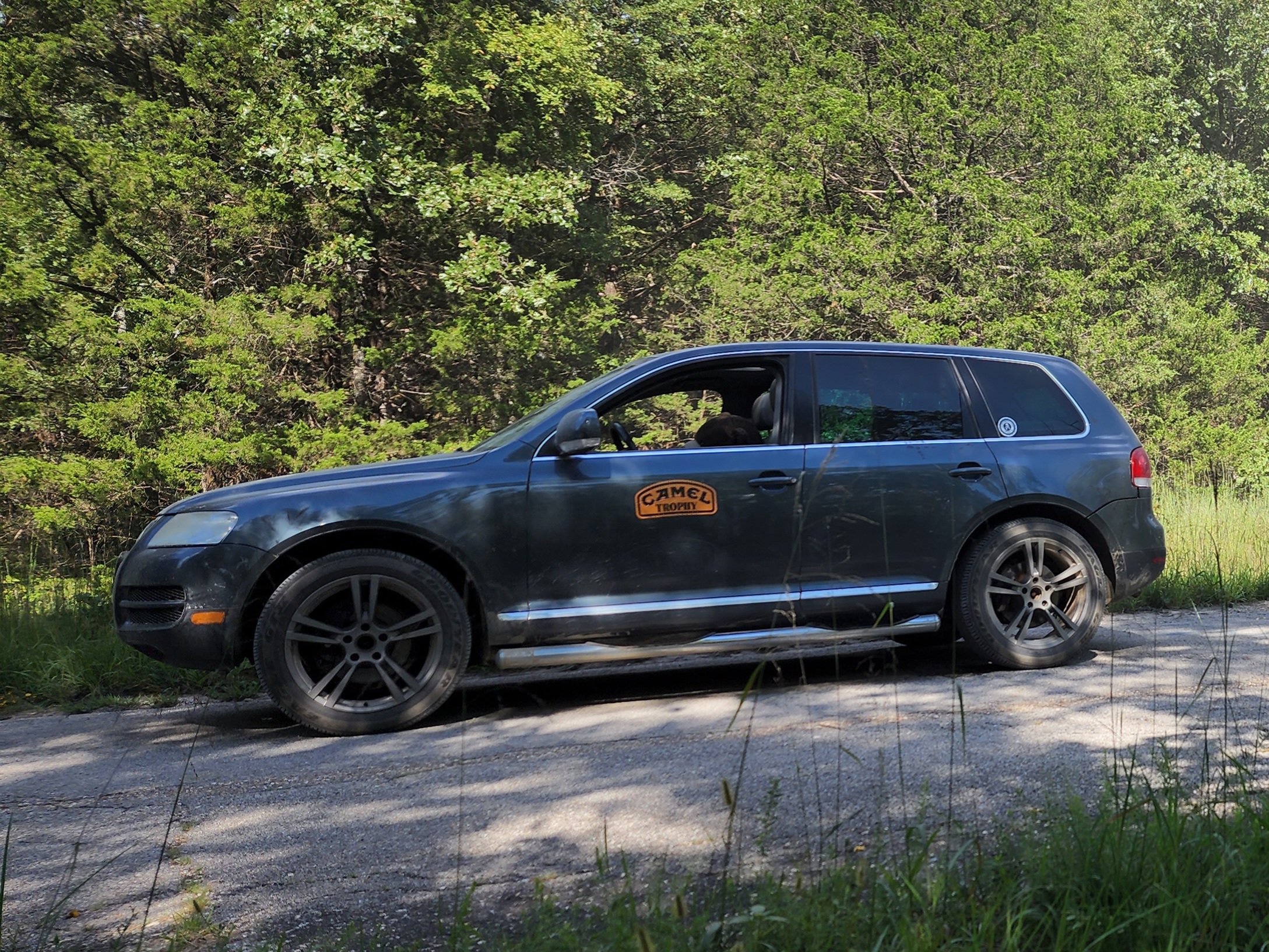 My destination? The Missourah Endurah 2022. This is Missouri’s flavor of the hilariously fun Gambler 500. There’s nothing quite like picking up trash and off-roading in garbage cars with friends and strangers. No other kind of automotive event quite compares. You just buy the cheapest car that you can find, throw some tires and stickers on it, then send it.

The Touareg and I arrived at the start point’s camp at 12:40 in the evening, beating Google’s original time by an hour. When I got there, most people were asleep, but there was a small drunken party happening in front of a van. A full luminescent moon and clear skies made for a campground that wasn’t completely dark. I enjoyed a couple of cold snacks with a friend that I hadn’t seen in over a year before passing out in the back of the Touareg. I worked the whole day, just to drive another eight hours. So I was ready to tap out before I even got there. I got just three hours of sleep before the event’s organizers blew the wake up horn.

The morning horn blared at 6 in the morning, just as the sun was creeping over the horizon. I just barely started dreaming, and tossed myself out of the back of the Touareg to put on clothes. Once I got dressed, I found my way to the start point, where some epic cars began piling up, ready to take on the challenge of a Gambler 500. 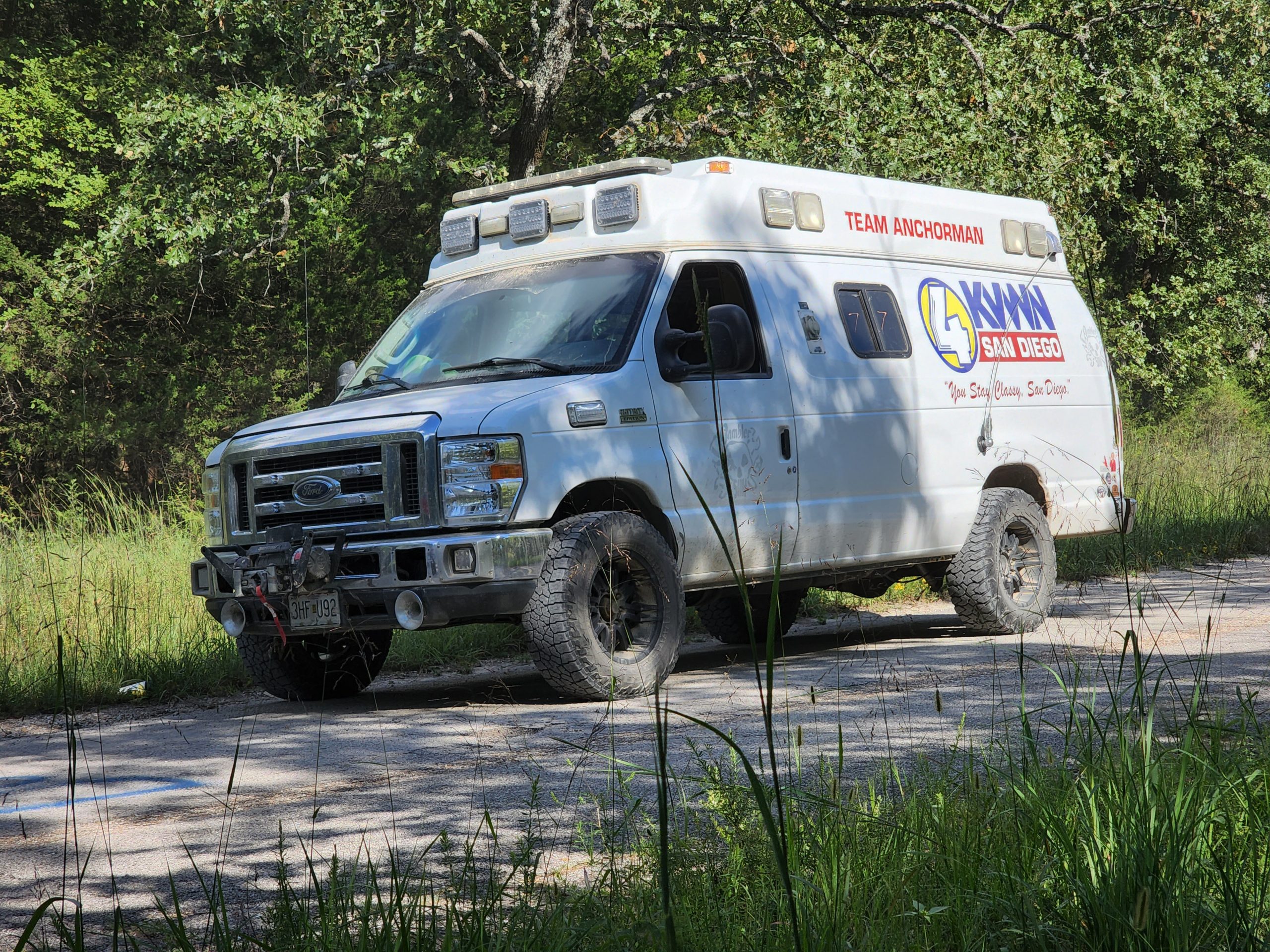 Let’s start with one of my favorites. The owner of this former ambulance used a giant graphics printer to make a replica of the news van from the movie, Anchorman: The Legend of Ron Burgundy. The graphics are really well-done and at first, I thought it was a real news van. It was always a giggle seeing this thing roll by. 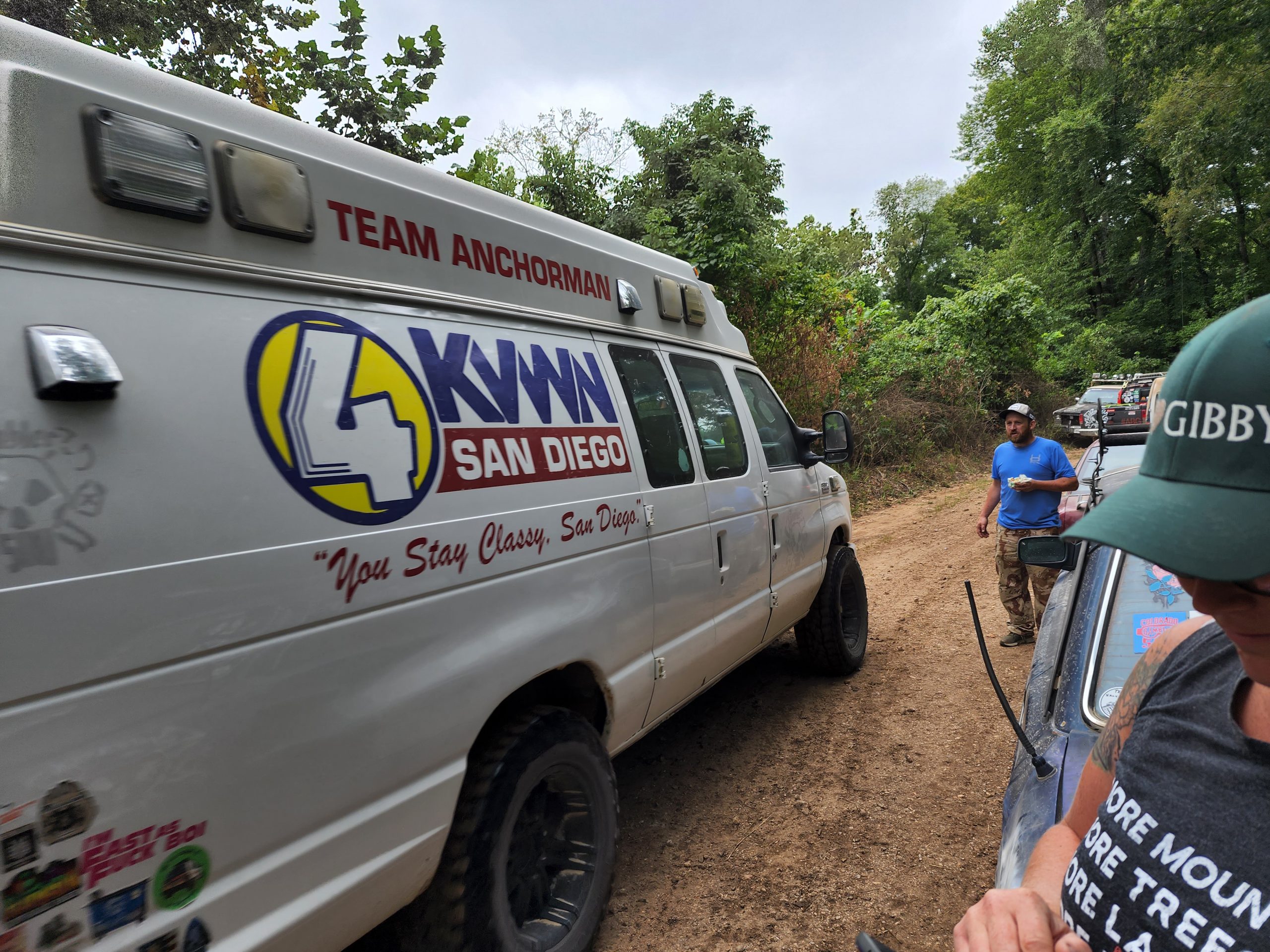 The Ford Festiva is a fantastic Gambler car. They’re light, nimble, and will climb about like a side-by-side. I turned one into a discount UTV and drove it until the gas tank failed. The owner of this one turned his Festiva into mobile mini golf. When he parks, he unravels a strip of turf. You can then climb onto the roof and hit the golf ball. If you do it just right, the ball will roll down the windshield, onto the hood, and into the hole. It’ll then come out into a cup in front of the car’s grille.

This little car is pure genius backyard engineering. And you bet I played mini golf on its roof! 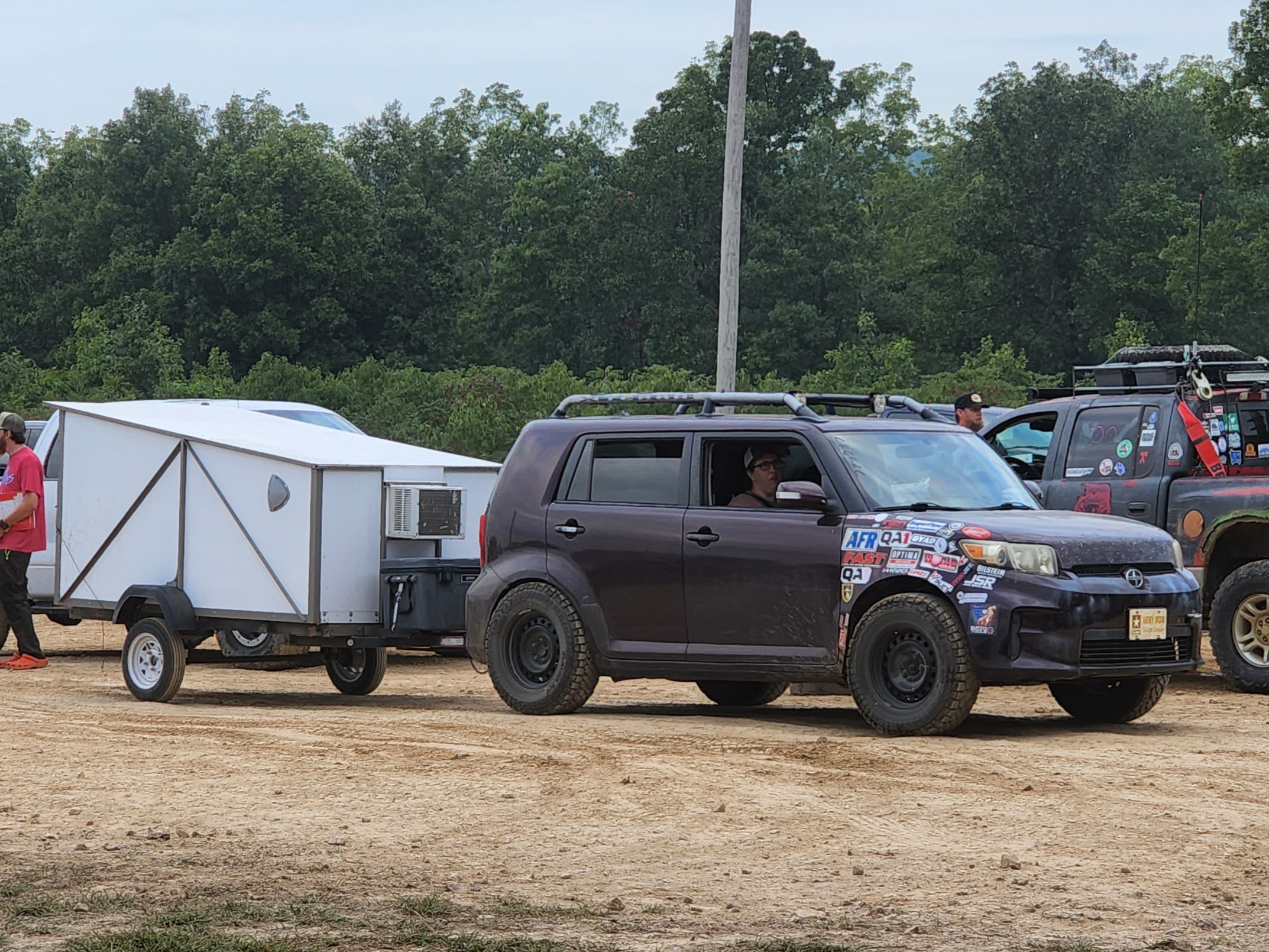 Here’s an example of where not sticking to $500 can still result in something epic. This second-gen xB looked to be pretty comfortable out there on the trails and amazingly, that custom-built camper held together, too. That said, one problem that I saw with this (and a number of other vehicles out there) is that the back tires rubbed frequently.

This car is owned by YouTuber Pole Barn Garage. According to the owner, Dalton, what happened is that the previous owner hit a deer with the Mercury. That ruined the front end and caused the airbags to deploy. Given the car’s age, it was a total loss. Dalton got it for $400, got it running good enough, then chopped off its roof. This car is going out with bang as a rally car before it’s finally sent to the scrapper. 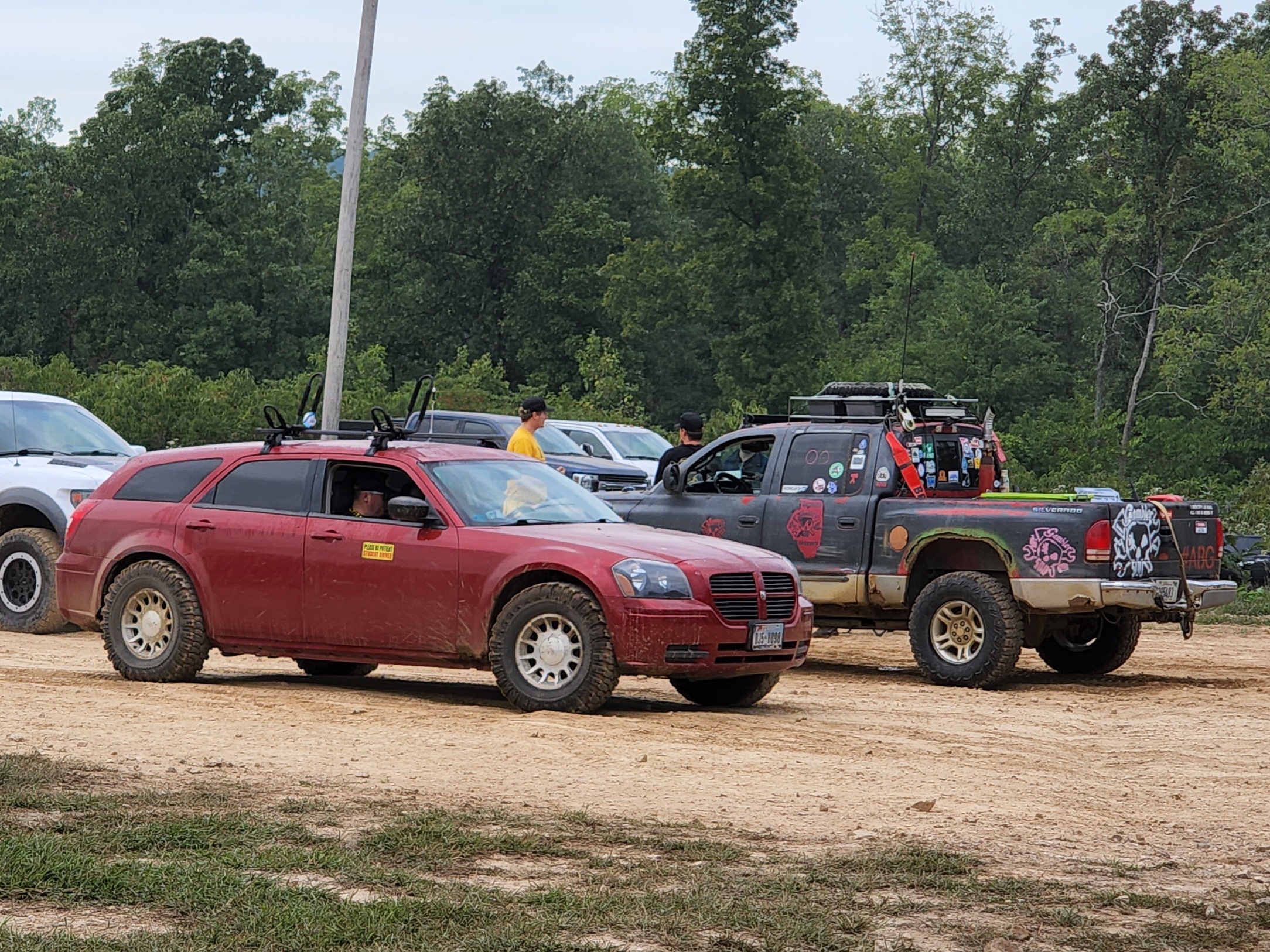 At first, I thought that the owner of this car destroyed Dodge’s underrated Magnum wagon, but there’s actually some clever work going on here. It’s lifted with an air-suspension, and I’m told it’s 100 percent reversible. I’ve seen the wagon throughout the rally, and it always looked phenomenal. It was joined by a matching red Charger with a similar suspension and tire setup. 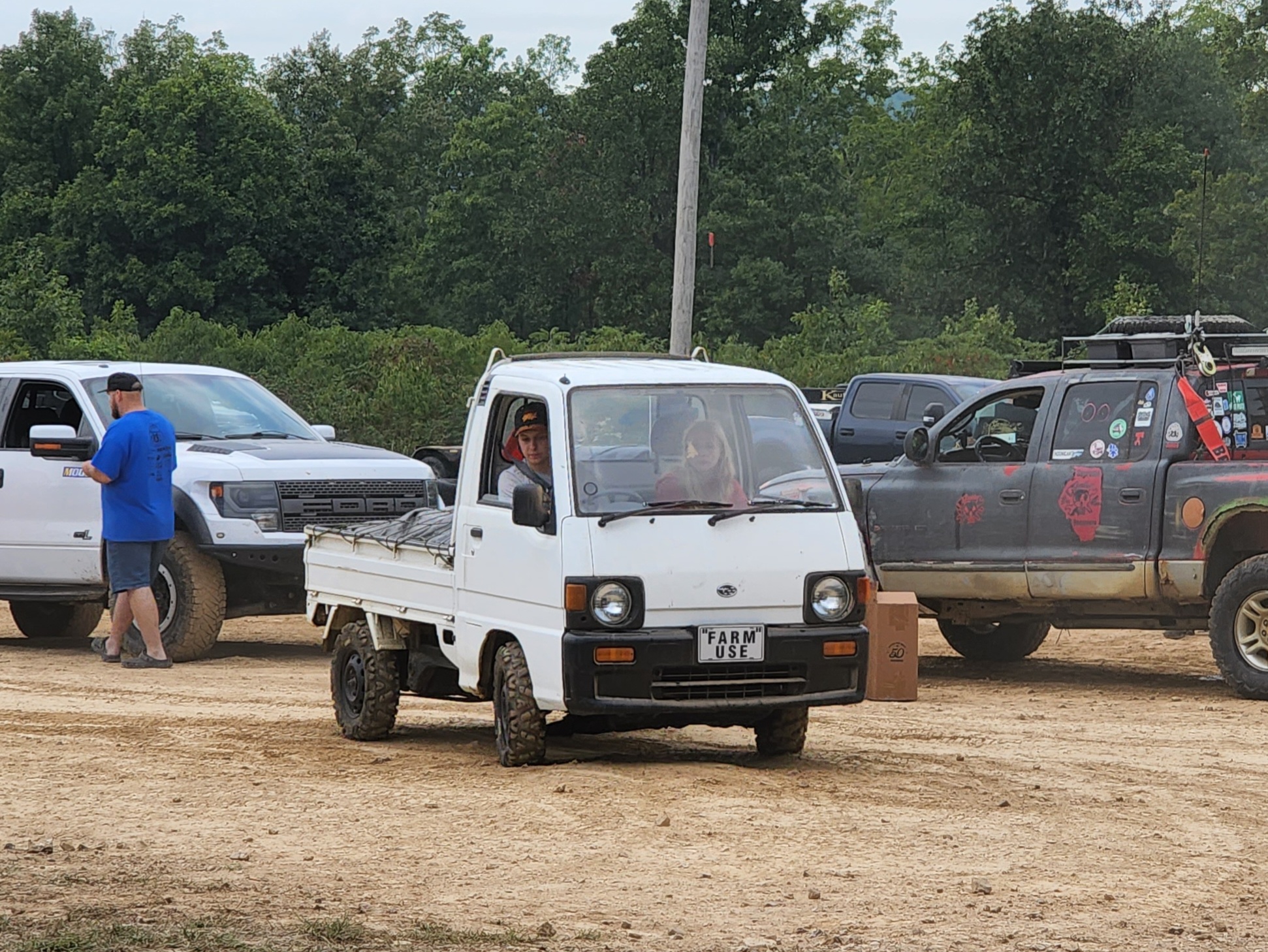 In the nearly two dozen Gamblers that I’ve done, I’ve seen kei trucks maybe two or three times. This one was the only street legal one that I’ve seen at a Gambler and it actually ran the route. Normally, I’d say that bringing a kei-class vehicle would be a nightmare. If you have to do sustained high speed on an American highway the drive will quickly become not fun.

Thankfully, the route chosen for the rally meant that you’d rarely exceed 40 mph, so the driver of this little truck probably had a great time. 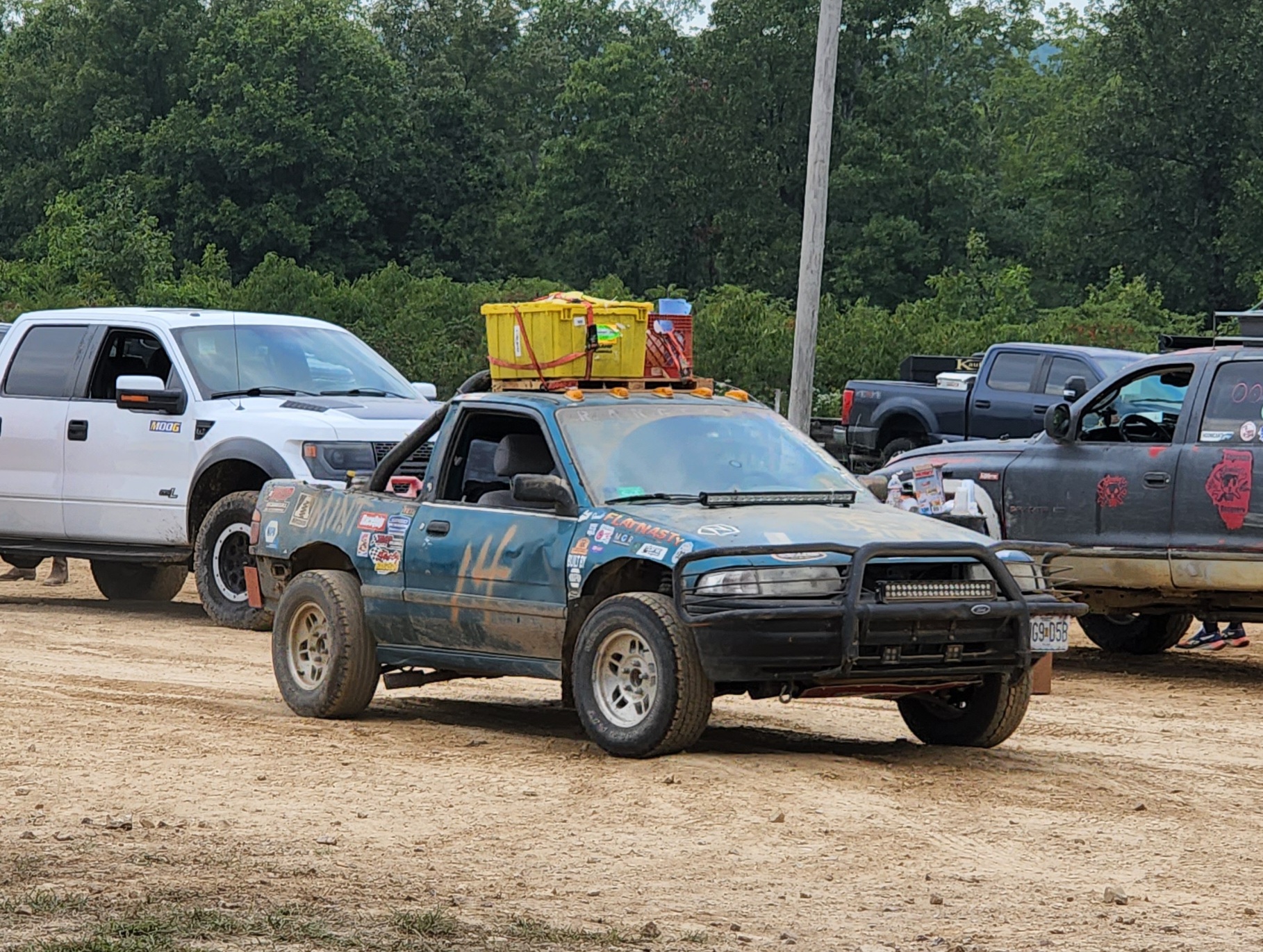 I always love when a car gets turned into a little trucklet. Sadly, builds as extreme as these mean that the car will forever be a Gambler car. Usually, I find that people turn real pieces of crap into things like this, so it’s all just fine. The wheels from a Ranger from the same era are a nice touch. 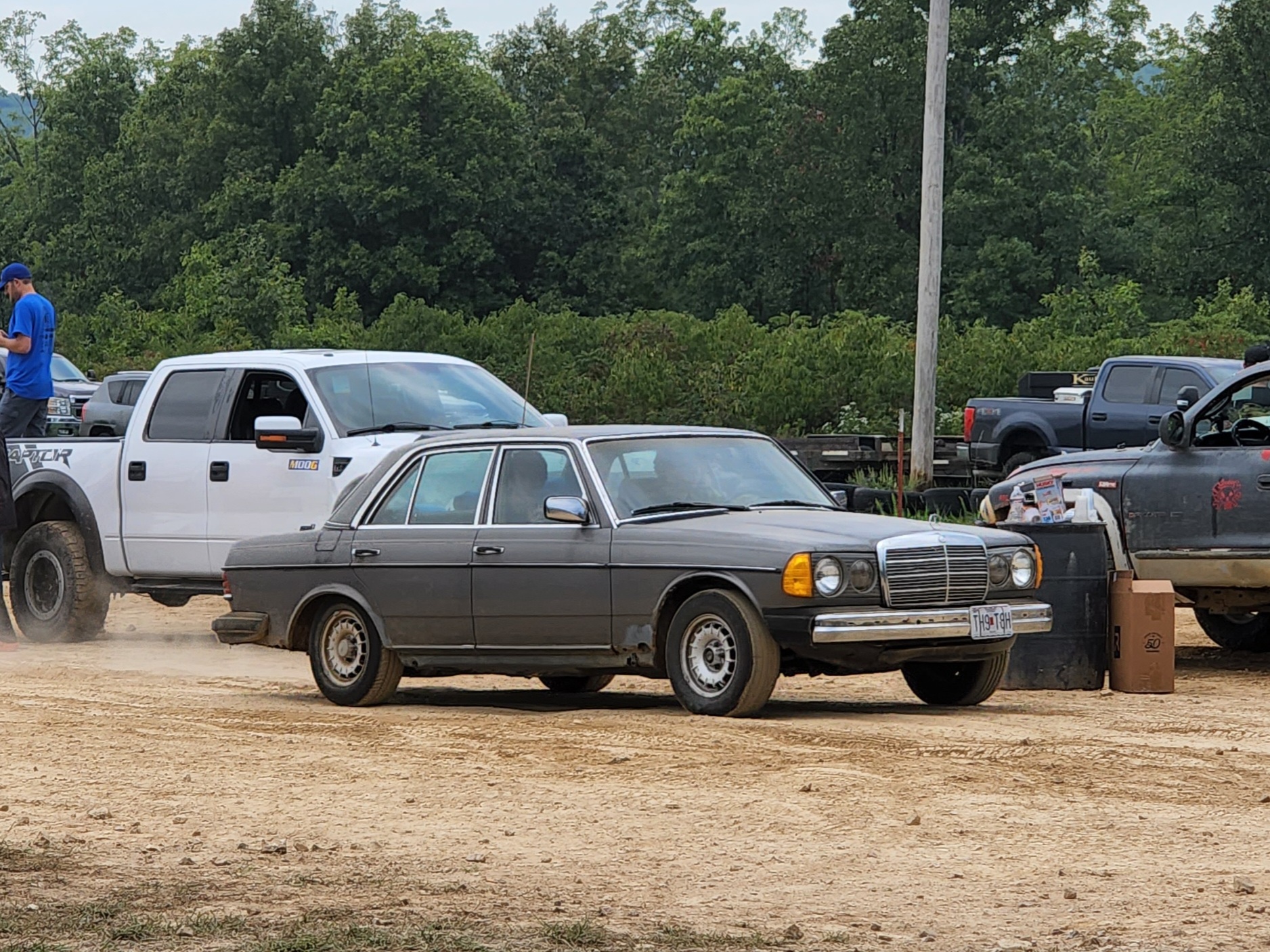 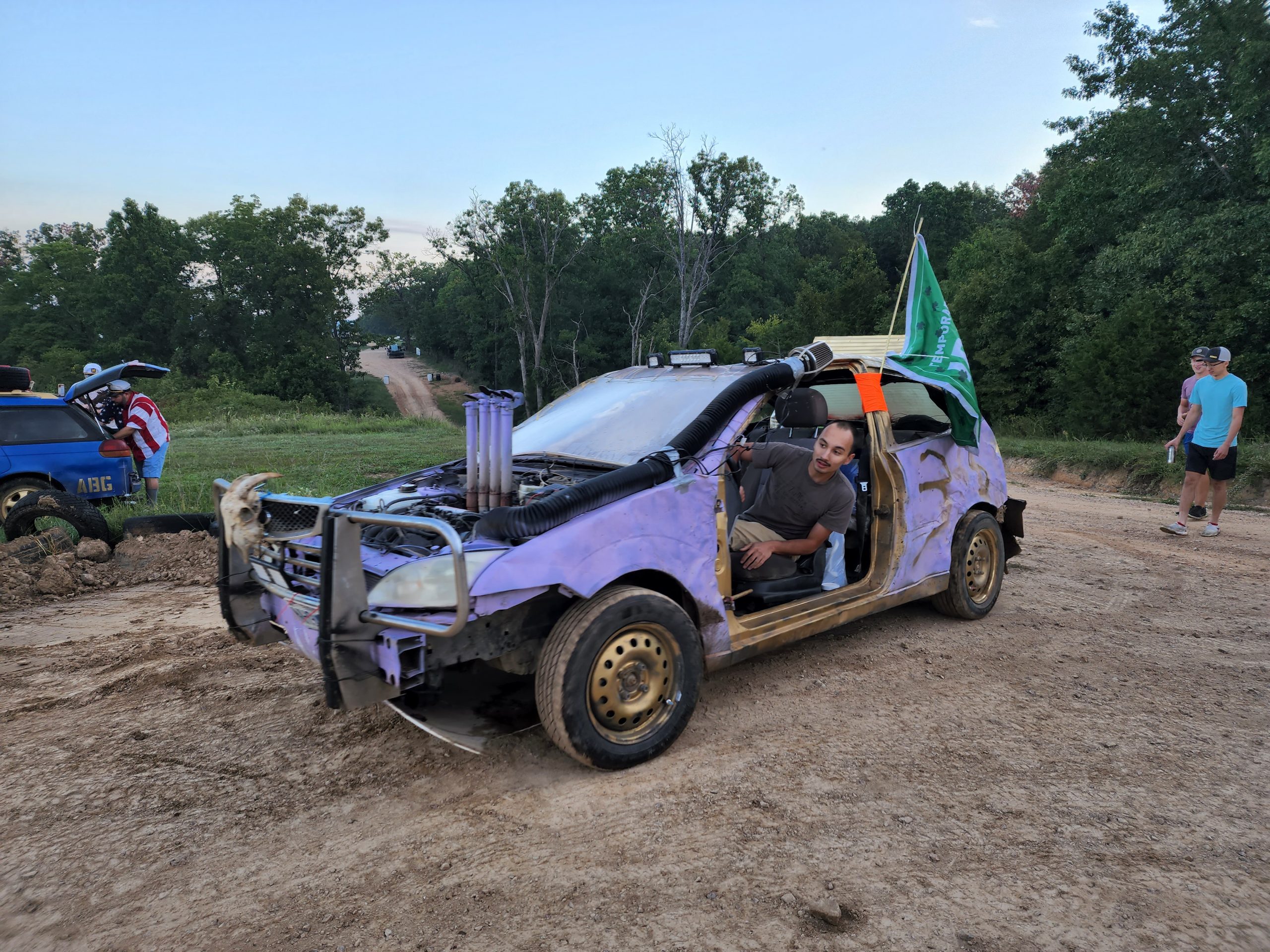 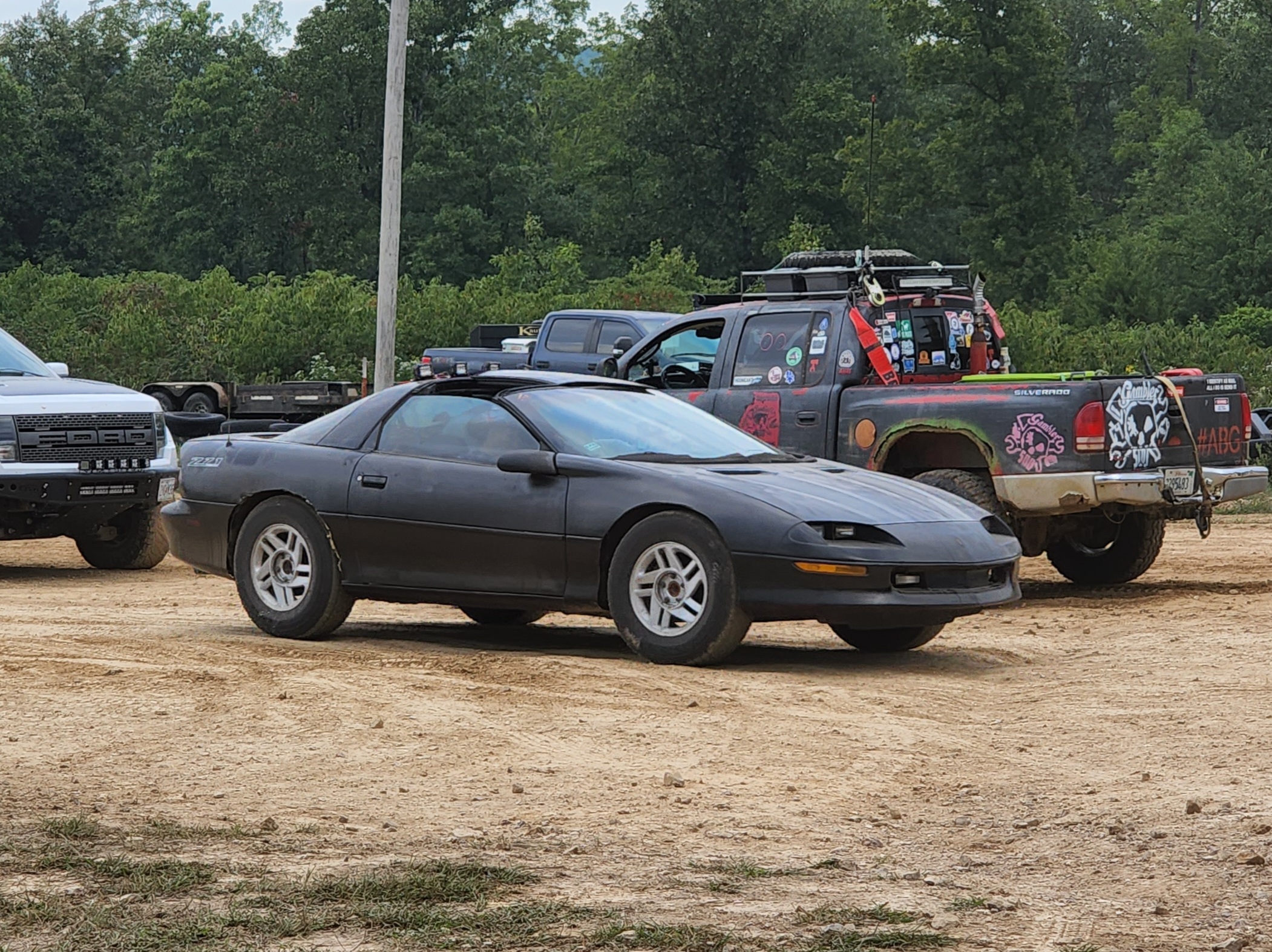 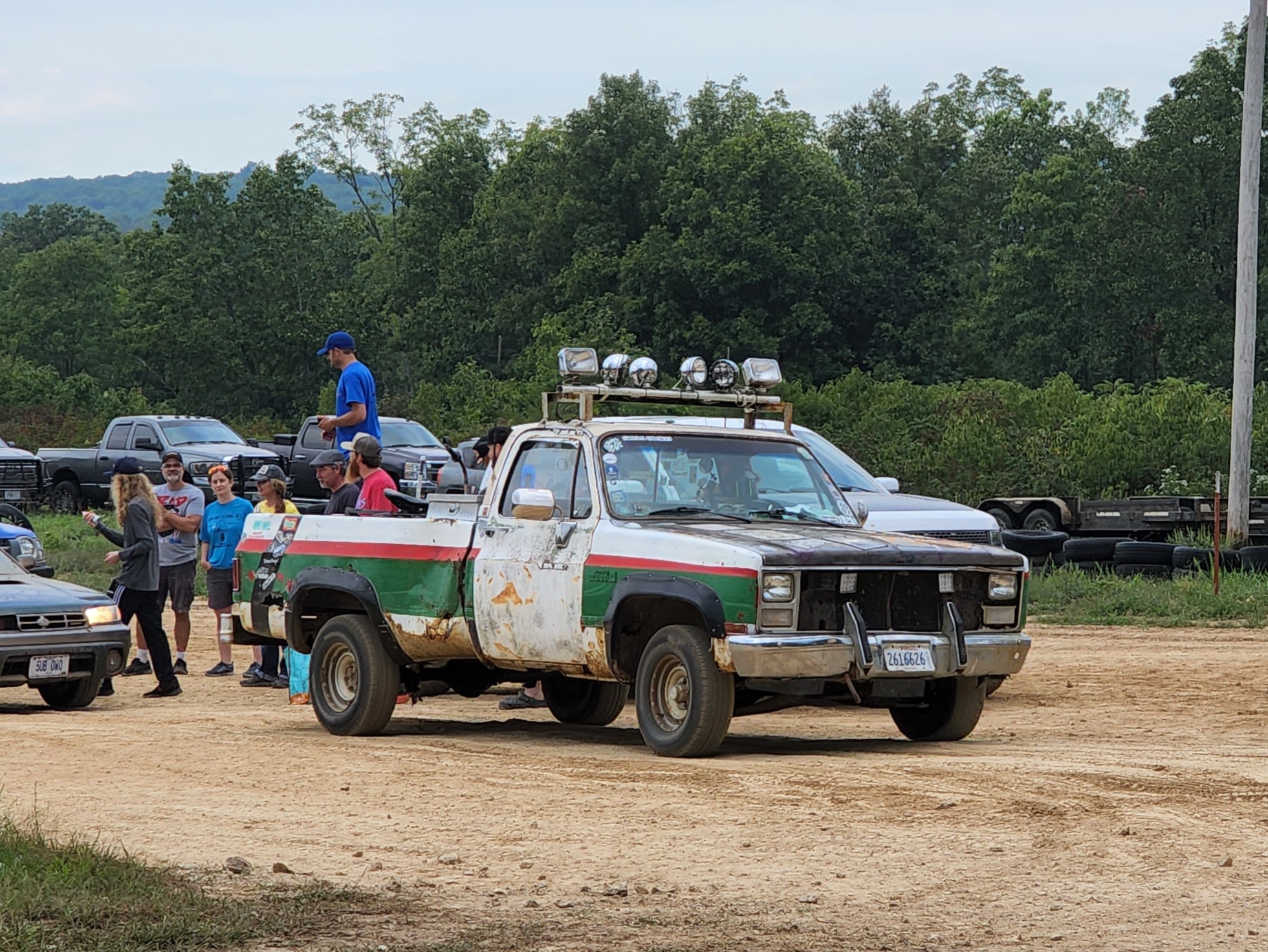 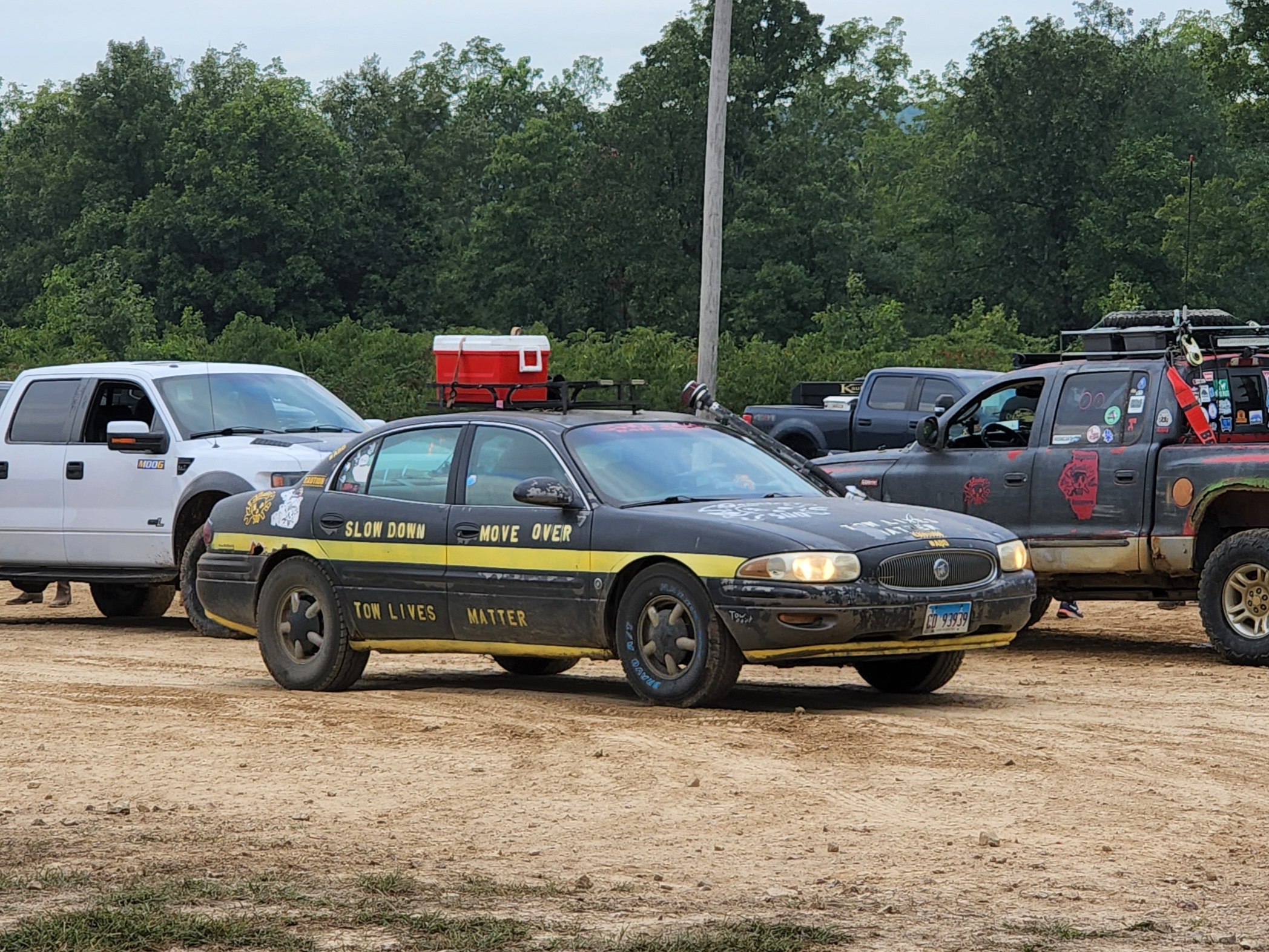 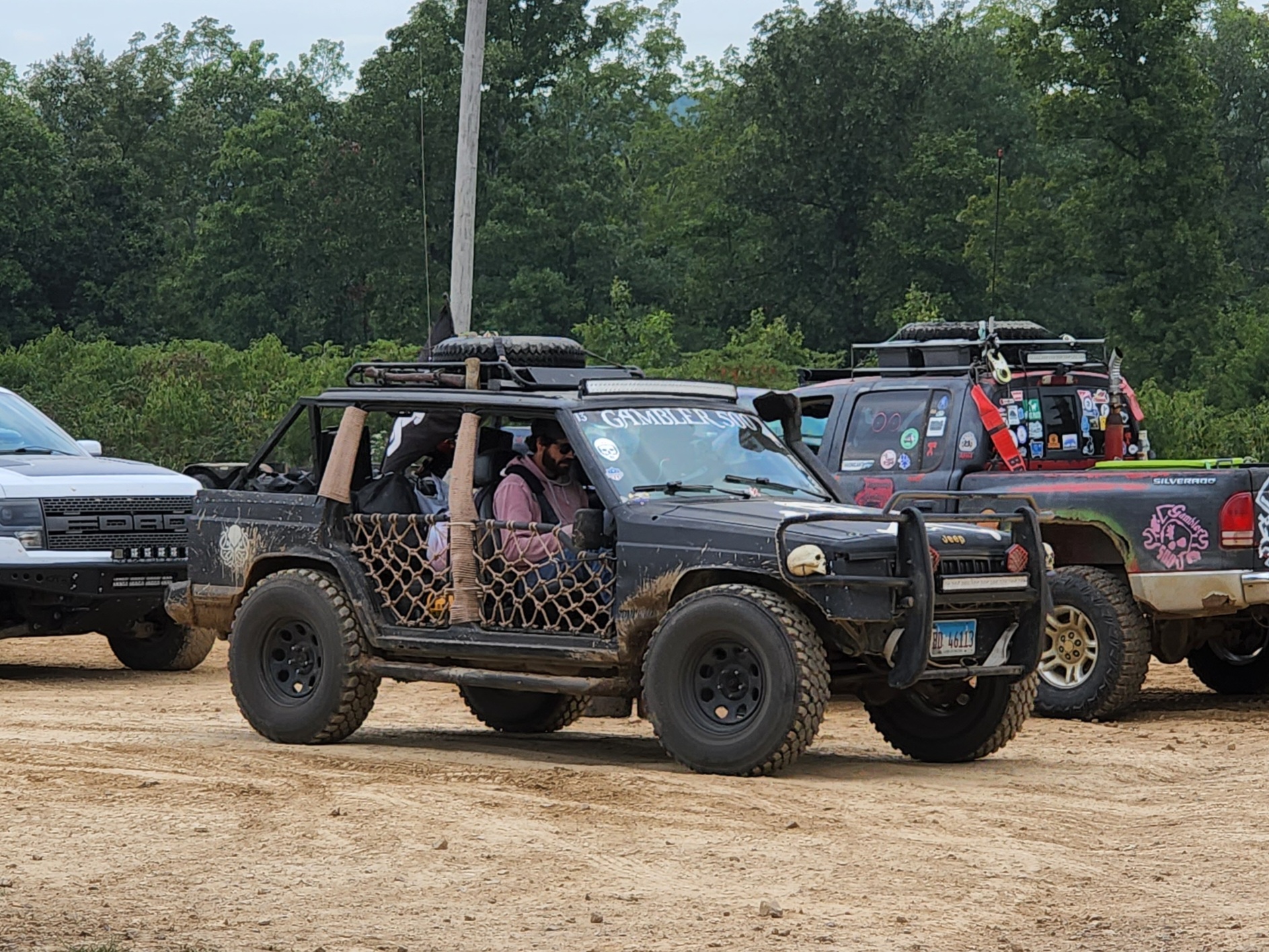 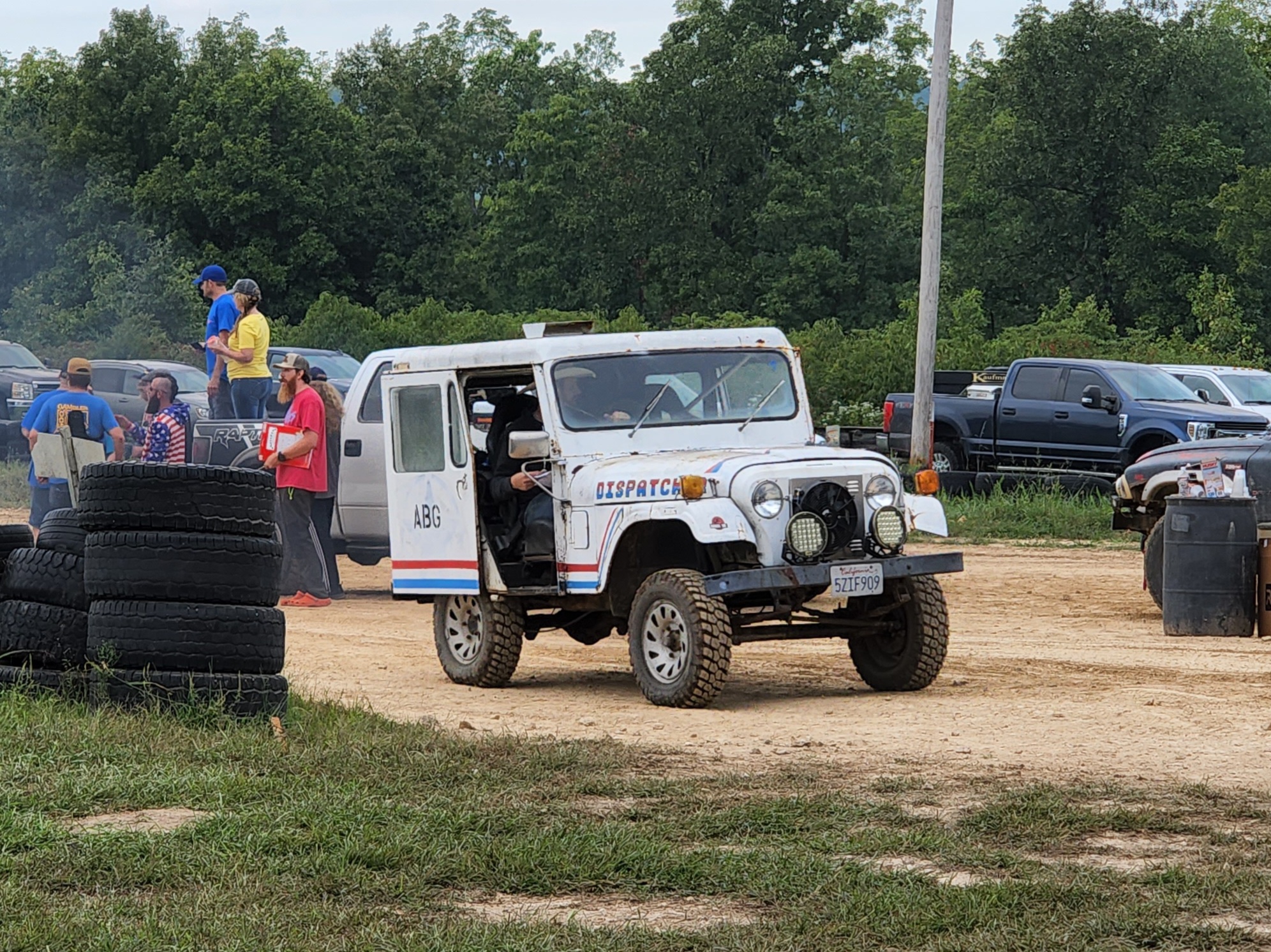 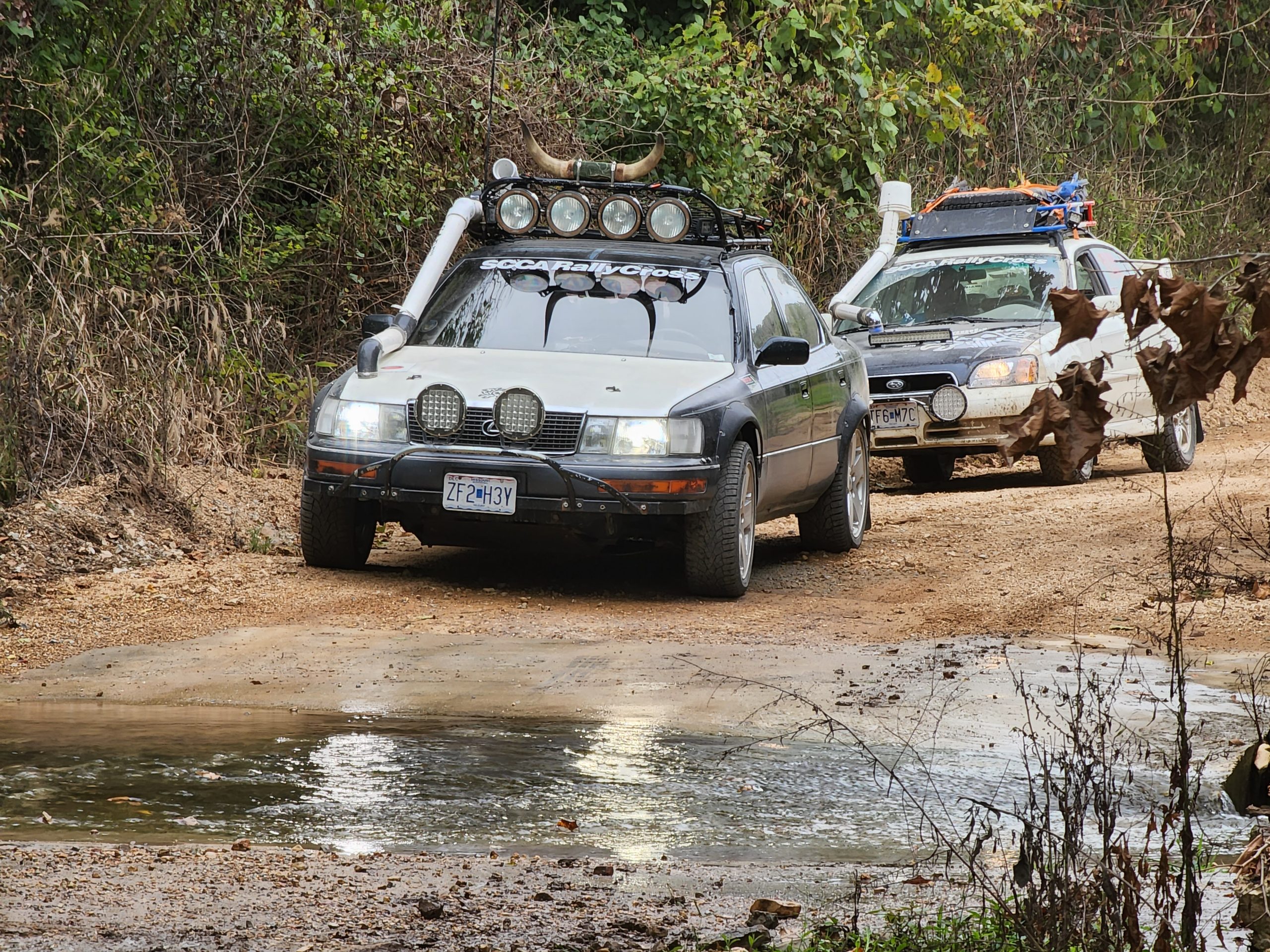 Sadly, I didn’t get pictures of some of the other awesome cars that were out there. Someone put huge tires on a small school bus. And there was also a vintage wagon sitting on the frame of an old diesel truck. The cars this time weren’t the most extreme that I’ve ever seen; that distinction goes to the wild builds that I’ve seen out in Oregon. Someone actually rallies a transit bus out there.

But these guys out in Missouri were still plenty creative. And perhaps most importantly, mostly everyone was down for the mission of cleaning up the roads, trails, and the Mark Twain National Forest. All weekend I saw these cars just spilling over with junk that people dumped into places they didn’t belong. You’ll get to read about that and more real soon. Until then, I hope you liked this smaller appetizer!

Mercedes is a lifelong fan of all things powered by an engine. When she isn't driving one of her five Smart Fortwos or her 14 other vehicles she could be found in the cockpit of a Cessna 172 or perhaps swimming in any body of water that she could find. She also has a deep love for buses of all kinds. Please send her buses. mercedes@theautopian.com Instagram: @mistymotors Twitter: @Miss_Mercedes30 Facebook.com/neonspinnazz
Read All My Posts »
PrevPreviousThis Amazing Old Delivery Van Was A VW Bus 10 Years Early And Proves The Corvair Was Not America’s First Rear-Engined Air-Cooled Vehicle
NextThe 1960s Understood The Power Of Stripes: Cold StartNext