Get Your Sketchy On With The Hop Rod, A Gloriously Insane Combustion-Powered Pogo Stick

Think of all the things you could power using internal combustion. Bicycles? Absolutely. Scooters? Yep. Skateboards? Sure, why not. Pogo sticks? Believe it or not, yes. Say hello to the Hop Rod, arguably the most insane form of combustion-powered personal transportation.

Yesterday, I mentioned the Hop Rod while writing about Mitsubishi beer and immediately realized that I needed to write an actual article on this bizarre toy. After all, a pogo stick augmented by tiny explosions sounds like a phenomenally fun way to break ankles and spawn lawsuits.

The motorized pogo stick was invented by Gordon Spitzmesser of Elwood, Ind. around the turn of the 1960s. Hey, it was a time of great optimism, if cars could have fins that an explosion-aided pogo stick could totally be a viable product. While Spitzmesser tried out various fuel mixtures including a reportedly thrilling combination of oxygen and acetylene, butane was eventually settled on as the safest solution. IndyStar reports that Spitzmesser was granted a patent on March 22, 1960, which must be one of the coolest thing of all time that could be hung on a refrigerator. Crazier still, IndyStar reports that Spitzmesser’s son Edwin was the Hop Rod’s guinea pig. 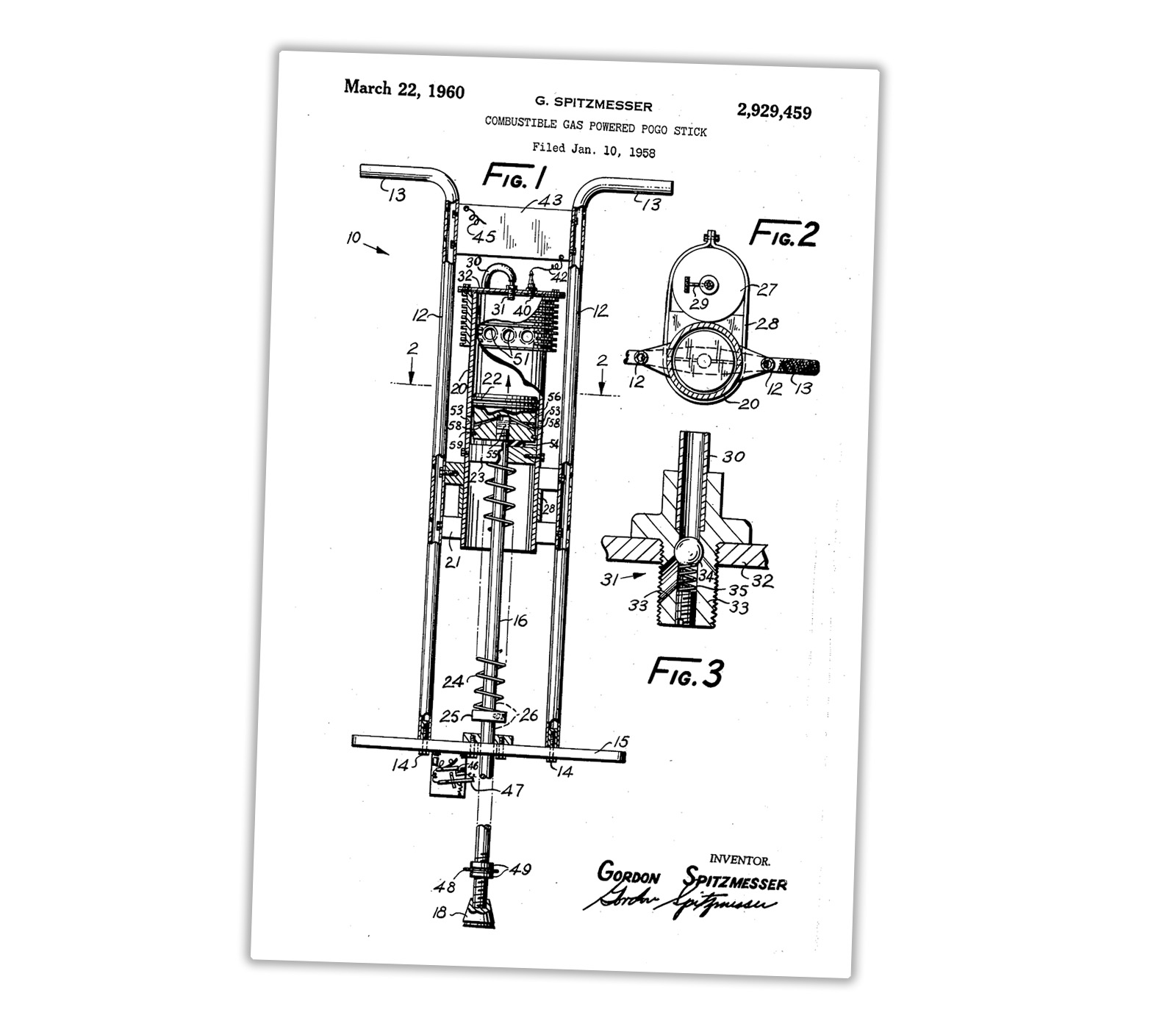 The inventor’s test pilot was his adolescent son Edwin. “Even on butane, if you came down not quite straight you could shoot out to the side and injure yourself,” said Edwin, now 66 and a retired school teacher living in LaPorte. But if you knew what you were doing, as Edwin did, it was fun. “I could do about anything with it,” Edwin said the other day in a phone interview. “I could do it with one hand and one foot.”

Those are some properly impressive skills, Edwin. Despite the non-zero risk of serious injury, Spitzmesser’s combustion-powered pogo stick sounds like an absolute gas. Someone deliver one to Johnny Knoxville and Co. stat. Anyway, while the combustion-powered pogo stick likely provided Edwin with hours of entertainment, Gordon Spitzmesser never got into the business of mass production. Instead, Spitzmesser sold the patent to Chance Manufacturing of Wichita, Kan., an ironic name given the chance you might get seriously injured if you hop on one of these bad boys. Chance Manufacturing marketed the device as the Hop Rod for a very brief while, before everyone realized what an insanely sketchy idea it was.

Back up for a second, how does a gas-powered pogo stick works. Let me tell you, it’s beautifully simple. Since a pogo stick is really just two concentric cylinders with a spring for resistance, it was fairly easy to turn one into a crude engine of sorts. This was essentially done by splitting the lower cylinder into two chambers. A piston atop the inner cylinder was fitted with a poppet valve to allow flow from the primary chamber into the secondary chamber and maintain vacuum under compression. When a rider hopped on the pogo stick, the lower cylinder would compress into the upper cylinder, sending the primary chamber past the carburetor and drawing in fuel-air mixture. 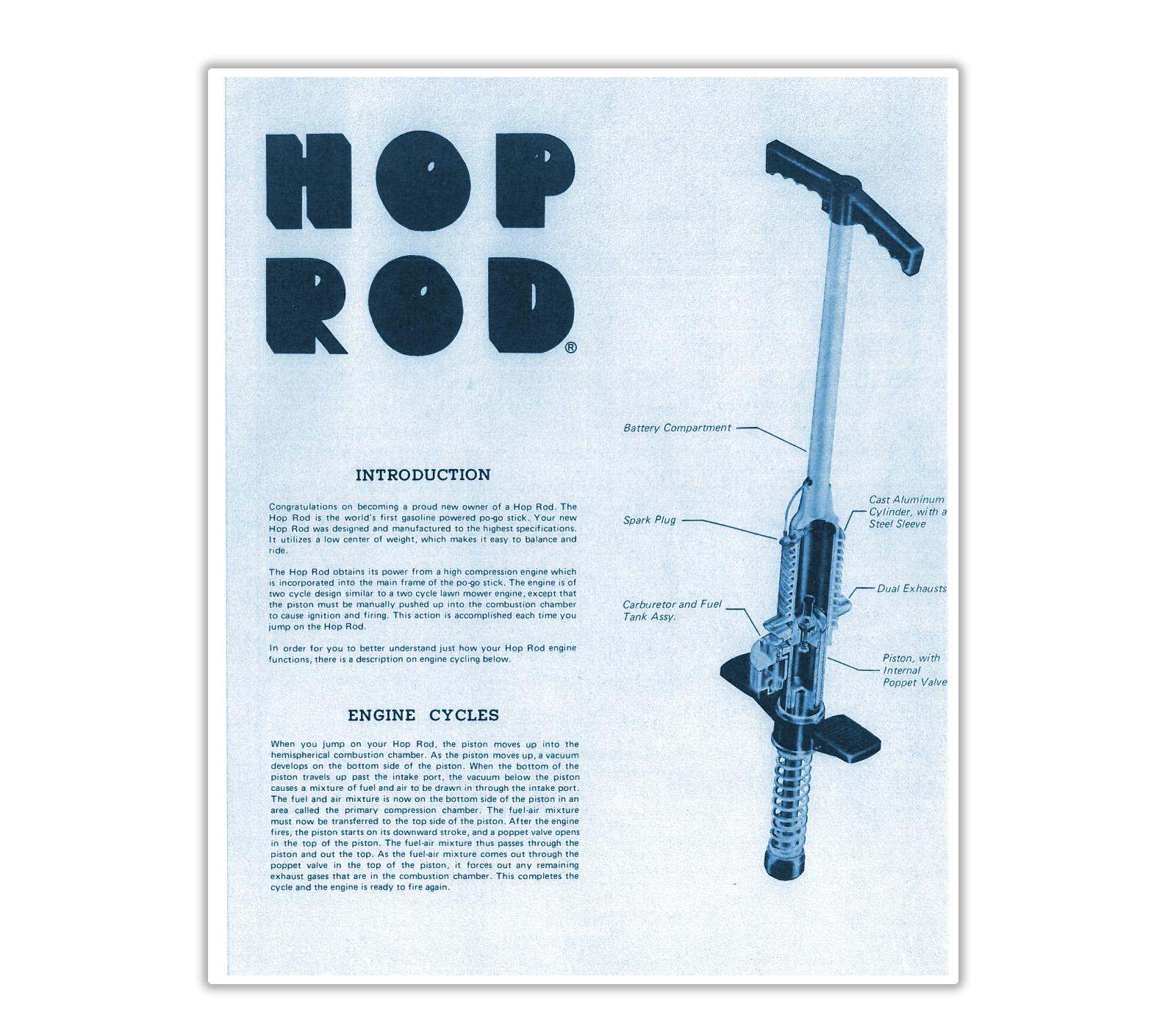 Pop up on the pogo stick, and the cylinder would extend, forcing the fuel-air mixture in the primary chamber up through the poppet valve and into the secondary chamber to be compressed once the pogo stick touched terra firma again, then ignited by a spark plug powered by a stack of batteries in the handle. The resulting explosion would launch the rider into the air and the cycle would complete all over again.

So what’s riding a Hop Rod like? Well, check out this quick one-minute YouTube video of the thing in action. Either this kid has some serious skills or the Hop Rod actually seems pretty safe. The height isn’t crazy, the hops are well-controlled, and the whole thing almost looks sensible.

Nowadays, Hop Rod units come up for sale online every so often, although you’ll have to pay a pretty penny to get one. There’s one up for grabs on eBay right now for $999, expensive for a pogo stick but reasonable for personal combustion-powered transportation. Plus, imagine the rush of being on a combustion-powered pogo stick. If electric scooters are a bit too quick and too mainstream for you, why not grab a Hop Rod? It seems like good, old-fashioned sketchy fun.

Thomas is a Nu Rave-blaring, heel-toe downshifting, maple syrup-swilling, chassis-geeking, junkyard parts-hauling, floppy-haired scenester who's been writing about cars since college. His current ride is a 2006 BMW 325i with the six-speed manual gearbox. Instagram: @thomas.hundal Twitter: @thomashundal
Read All My Posts »
PrevPreviousThe Volvo EX90 Will Either Be The ‘Safest Volvo Ever’ Or Will Help The Machines Win
NextHow Ford Did All The Hard Work That Led To Chrysler’s Revolutionary 1980s MinivanNext