While scrolling the interwebs earlier, I came across something almost too absurd to be real. Something that would never fly today, but is instead an artifact of the past like the Hop-Rod combustion-powered pogo stick and Jarts. I’m talking about Australian-market Mitsubishi-branded beer.

Now, I don’t mean to incite a moral panic or anything, but I’m not entirely sure if motorshow beer is the brightest idea. Hey, it was the 1980s, attitudes were different back then. Popping down to the motor exhibition, grabbing a road soda, and trying not to wrap your Holden around a post on the way home likely wasn’t as frowned-upon then as it is now. 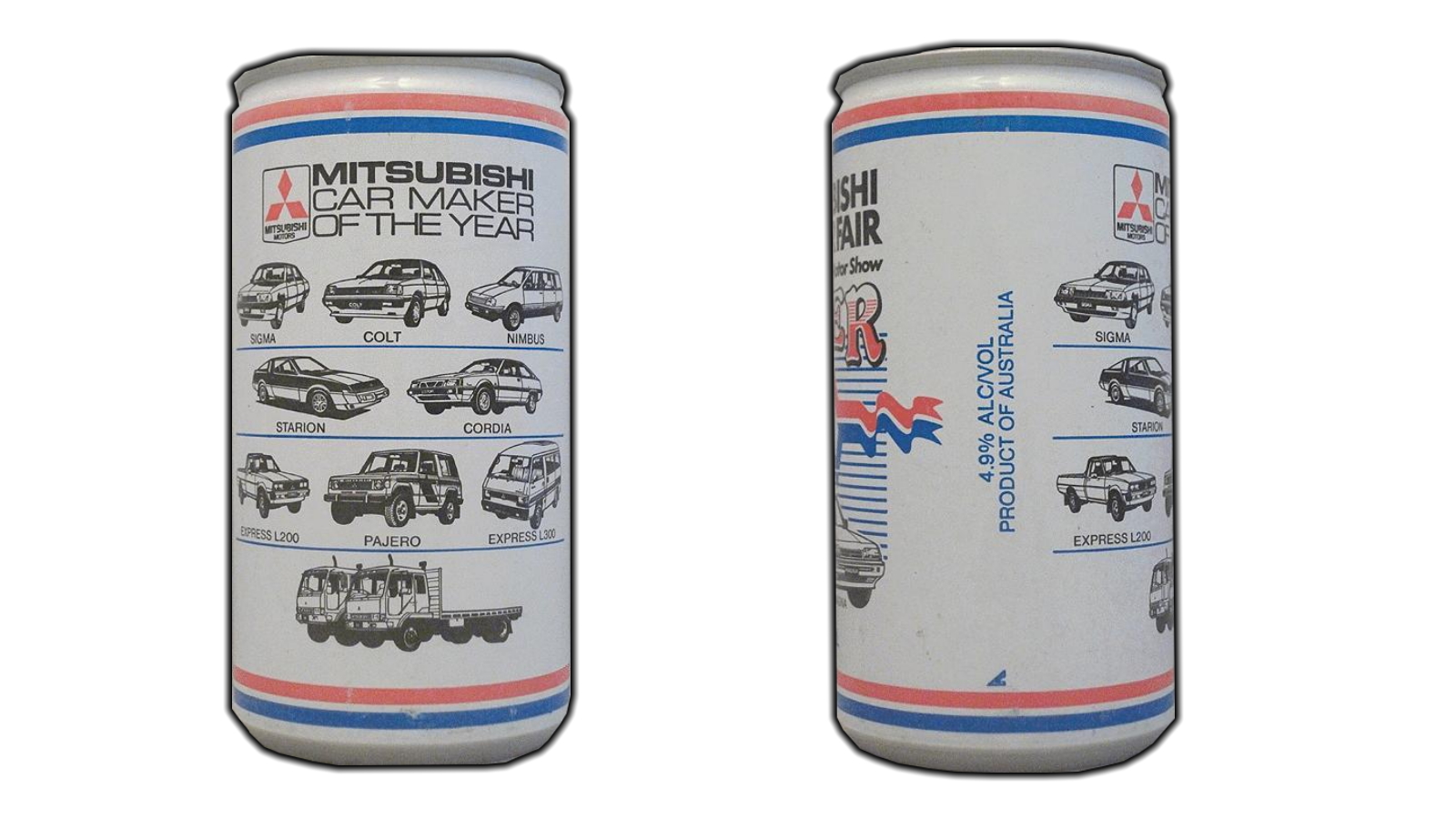 It’s a bit absurd that Mitsubishi felt the need to resort to lubricating its customers in hopes of making sales, especially when you look at the company’s lineup in the 1980s. You had the turbocharged Starion coupe, the anvil-tough Pajero SUV, the practical Nimbus MPV, and the sensible Colt hatchback. It was a pretty strong lineup for the 1980s, even in the face of favorable Australian competition. Compare the J-Body Holden Camira to the Mitsubishi Sigma to see what I mean.

Curiously, canmuseum.com doesn’t list a year of production, so let’s see if we can narrow it down based on the cars on the can. The Magna on the face of the can is clearly an early model, judging by the grille insert and early GLX wheels. Figure a window between 1985 and very early 1987. Of equal importance is the Starion on the can. It appears to be a leaded JB model as later JD models had a thick black extension on the front spoiler that doesn’t appear here and earlier JA models had a hood scoop. For now, I’m fairly confident in saying that this can is likely from 1985. 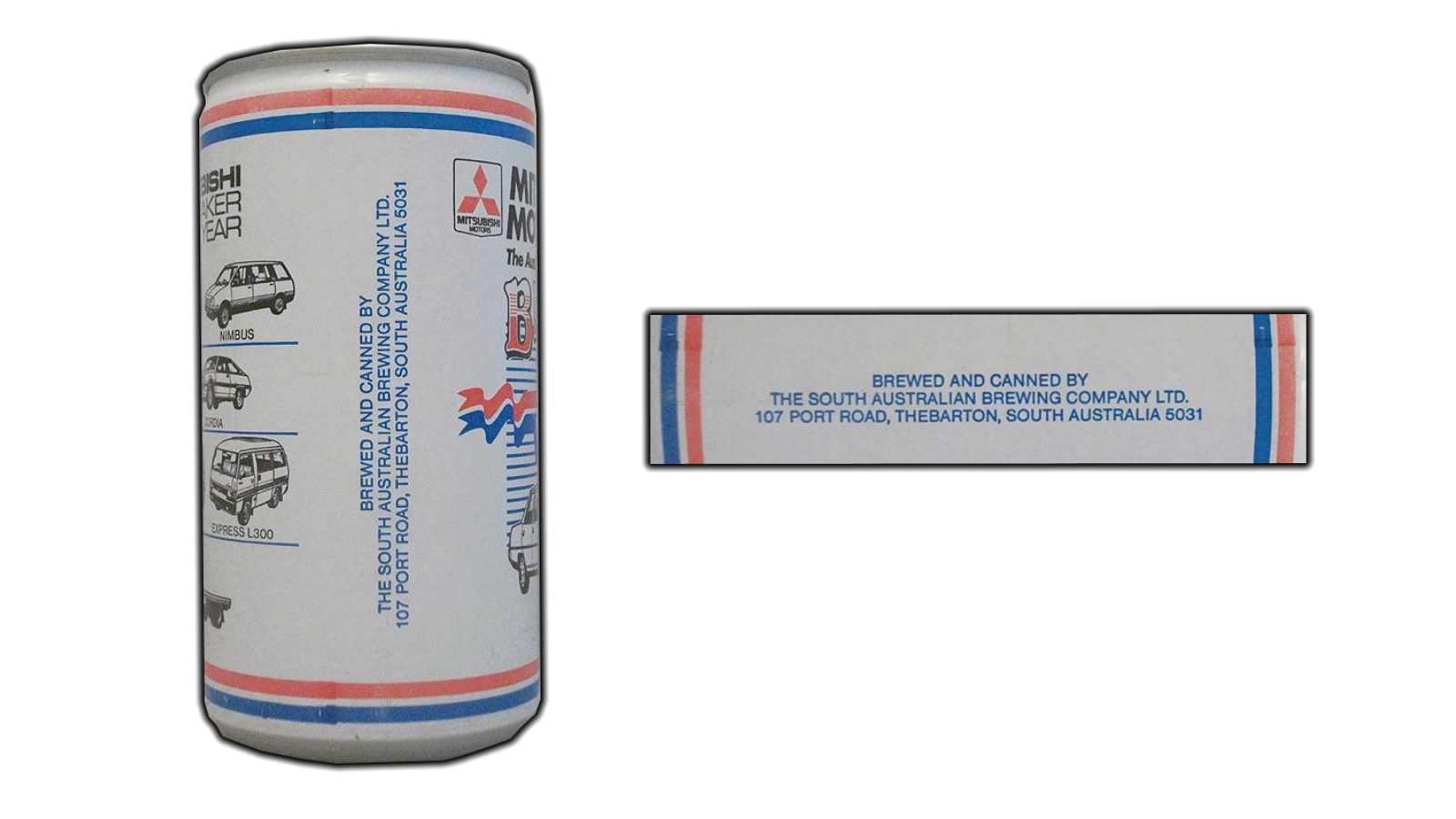 However, something else on the can caught my eye. This beer was brewed by the South Australian Brewing Company in Thebarton, which means that this isn’t just Mitsubishi-branded beer. Let me explain. See, back in the 1980s, the brewery in Thebarton was rebranded as West End after the original West End brewery in Southwark closed. Australian newspaper INDaily reports that Lion Nathan snapped up the West End brands in 1993, which set the stage for a later acquisition of Lion Nathan by none other than Kirin in 2009.

You may have heard of Kirin before, be it through Coca-Cola products in America’s northeast, Kirin whiskey, or even the former Kirin-Amgen pharmaceutical venture. What you may not know is that Kirin is part of the Mitsubishi group, meaning that in a way, this Mitsubishi-branded beer foreshadowed the future of its makers.

From bizarre marketing stunt to predicting the future, this Mitsubishi beer is absolutely amazing. While Trek hasn’t been bought out by Volkswagen and L.L. Bean isn’t yet a Subaru subsidiary, this whole story really makes you wonder what megacorps could end up making as conglomerates form. After all, I used to own a Daewoo computer monitor and it was fantastic.

Thomas is a Nu Rave-blaring, heel-toe downshifting, maple syrup-swilling, chassis-geeking, junkyard parts-hauling, floppy-haired scenester who's been writing about cars since college. His current ride is a 2006 BMW 325i with the six-speed manual gearbox. Instagram: @thomas.hundal Twitter: @thomashundal
Read All My Posts »
PrevPreviousI Am Uncomfortably Attracted To This Cayman Green 1992 Ford Escort GT
NextHow I Saved A Once-$90,000 Mercedes SL I Bought For $1,900Next