I’ve been seeing some absolute nonsense online recently, nonsense showing some actual real-world car features, and I’ve realized it’s my duty to take a moment and let the whole world know what’s going on here is very much not okay. It’s not okay. I’m not going to sit back and just let it happen, let my beloved universe of automobiles get slowly infected by this insidious, pervasive idiocy because I sat back and did nothing. Not today, Satan. Not fucking today. What I’m not going to let happen is this: gloveboxes opened by a software button on a touchscreen interface, buried inside some bullshit UX. I wanna scream knowing it exists.

I realized I needed to speak up about this – and I don’t think this is hyperbole – grave threat to the very human condition – because it’s somehow infected the new Cadillac Lyriq, and is now showing up on videos about the car, like this one done by none other than our pal Doug DeMuro:

I have to hand it to Doug for maintaining his composure here; I can only imagine moments after this video was shot he was behind a tree, sobbing and vomiting and shaking all over, while one of Doug’s many handlers surrounded him, covering him with medicated salves and telling him that somehow everything will be fine.

But everything will not be fine.

Did you really get a look at what was happening there? There’s at least three steps involved here, and I’m being generous, because depending on what the center-stack display is currently showing or doing, you’d have to add more steps even to get to the menu with that “Controls” icon: 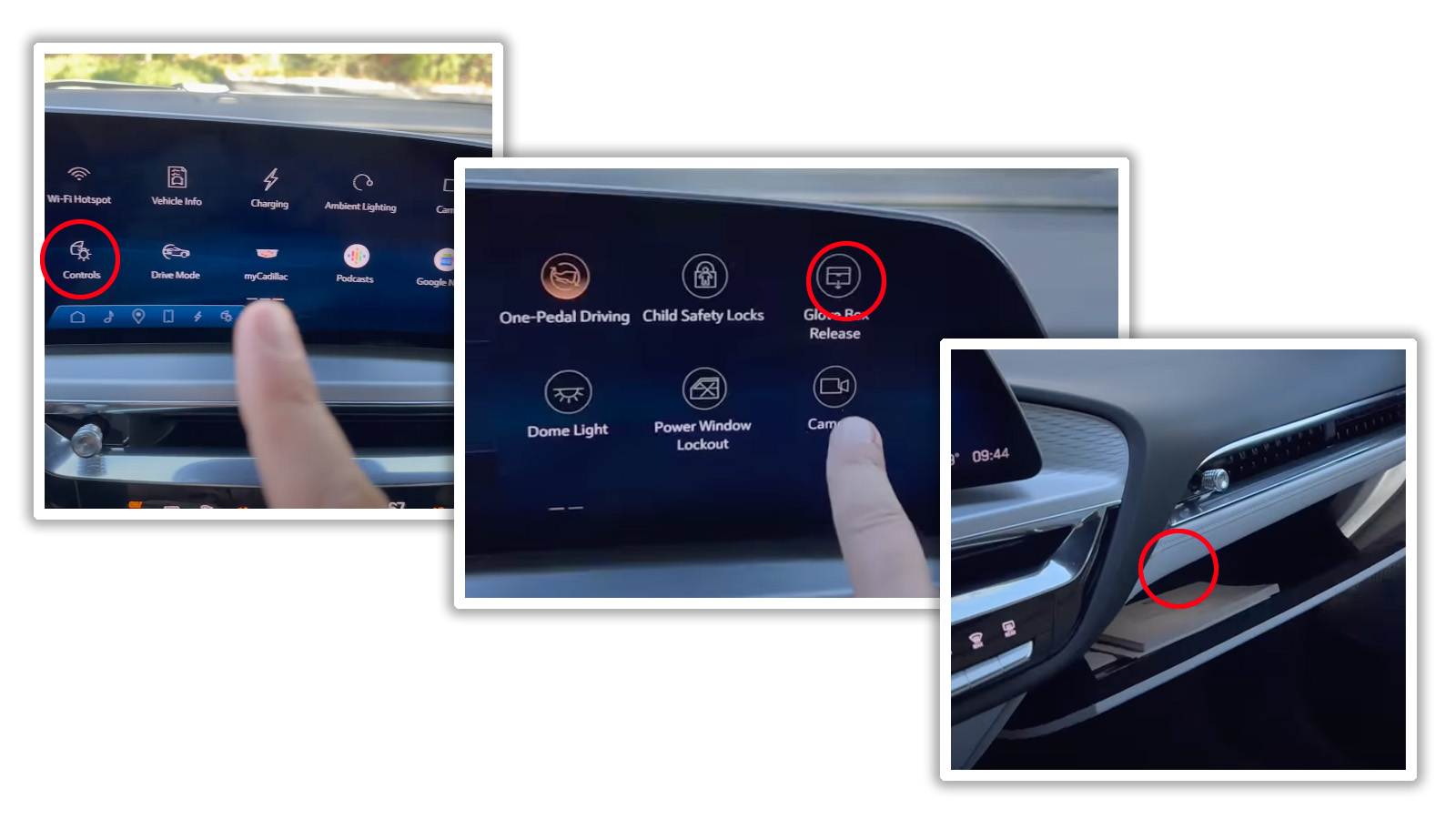 I know I’m not the only one who feels the same sense of rage and dread when they see this sort of thing happen, because I’ve already seen things like this:

This, of course, is the only reasonable reaction to being confronted with the touch-screen glove box release. I should be clear that I’m not trying to single out Cadillac or GM here, they just happen to be the most recent example of this madness, but it has existed before, like on the Tesla Model 3:

I didn’t speak out when the Tesla first demonstrated this, and that’s on me. I foolishly thought this was just some Tesla-only affectation, and there’s no way this poison could seep into the greater mainstream car market. I was wrong.

Speaking of wrong, what the hell is wrong with that guy in the Tesla video? How does he find this cool? Does he have a knee-buckling, pants-ruining orgasm when he goes to a grocery store and steps on the magic mat that makes the sliding doors open automatically? Jeezis, dude, stop encouraging this.

The touch-screen-actuated glove box is terrible because it’s one of those examples where carmakers have found that they have the technology to do something, so they do it, without considering literally anything about what they’ve done. Did anybody want this? At all? It takes something that has never been a problem, opening a glove box, and added cost and complexity to the construction, and added time and inconvenience to the process. No problem is solved, but a fuckload of new problems are introduced.

What if your battery dies, and you have your small emergency charger in the glovebox? Tough shit! What if you’re waiting in a turned-off car while your friend or parent or lover pops inside the liquor store, and you need to get, say, your hyper-important pills out of the glove box? Again, tough shit. And, if you’re thinking, “hey, stop worrying, I’m sure they have an emergency mechanical release for the glove box somewhere,” then I encourage you to fuck right off and take a moment to think about the deep, hurtful idiocy of that statement.

Did they do focus groups for this feature? Did they get responses like these?

“I hate how easy and quick it is to get the glovebox open. Can you guys solve that?”

“Is there any way to make simple acts I’m used to doing a real fucking chore?”

“How can I be sure every single tiny fucking thing on this car will be an expensive hassle to repair in 10 years?

“If the battery dies, is there any way to fuck me over even more than normal? Like, you know, hard?”

“Can you just smack the shit out of me over and over again with like a slab of roast beef, or is there some electromechanical and software solution you can integrate into the car for the same effect?”

I hate this so much. Nobody wants this. Nobody needs this. You want to make the car seem fancy, just make a physical latch for the glovebox out of something nice instead of, you know, crap. Though, with that advice in mind, if I was offered a choice between a conventional glove box latch made from composite material sourced from the hydraulically-compressed feces of convicted sex offenders or a menu-based touchscreen glovebox release, I’ll have mine with the pervert shit plastic, thanks so much.

What if you get pulled over by a cop, and they tell you to turn your car off, like they do, but then you have to explain to the already tense cop that you need to turn your car back on so you can open the fucking glove box door so you can get your documents? Depending on the cop and the circumstance, this can only make things worse.

What’s the problem this was supposed to solve, again? Opening a glove box was too obvious? Too easy? The mechanism was too long-lasting and cheap?

Carmakers are fundamentally like huge, dumb animals. When they do bad things, you have to be firm and forceful and tell them NO BAD, loudly and often, and that’s where we are right now.

So, GM: NO. BAD. BAD COMPANY. Stop. The right thing for GM to do right now, at this very moment, is to recall every single fucking Lyriq out there and retrofit a real glove box latch onto these. I do not care what it costs. It’s worth it. They should also send fruit baskets or cookie assortments or something to every owner that had to deal with this horseshit even once along with a formal apology. And the company should pledge, hand on the gold-covered skull of William Crapo Durant, to never, ever pull this shit again.

You know what? Make Tesla do it, too. Recall every Model 3 with this stupid touch-screen glove box release setup and go through the same shit I said GM should do, but swap William Crapo Durant’s skull for Elon’s groin or something.

Any other car maker who has committed this atrocity should do the same, but I’m not going to look up who else may have done this because I’m a caring, tender human and my very soul can’t take the onslaught of knowing how far this bullshit has spread. It just has to stop. Now.

I’m very curious to see if anyone disagrees with me in the comments. Could there be people out there who like this insipid horseshit? Is it possible? Could there be masochistic, perverse simpletons out there who want to navigate a fucking touchscreen menu to open a lid inches from their fucking stupid fingers? That can’t exist. There have to be more Sasquatches that read this site than blighted morons who somehow, perversely want touch-screen-menu based glove box latches. In fact, I hope there are. I’d rather spend time with Sasquatches, any fucking day.

So, again, to all automakers now or in the future: DO NOT MAKE GLOVE BOXES OPEN FROM A TOUCH SCREEN MENU.

I'm a co-founder of the Autopian, the site you're on RIGHT NOW! I'm here to talk to you about taillights until you cry and beg me to stop, which I absolutely will not. Sorry. Hug? Also, David's friend.
Read All My Posts »
PrevPreviousThe Polestar 3 Is A Gorgeous Electric SUV With 300 Miles Of Range
NextThis Absurd Wooden Kit Car Was Made By The Aston Martin Lagonda DesignerNext