Do we miss the plethora of brands that General Motors used to offer? Thinking about that the other day, I was a bit torn in my feelings towards that alternate reality. 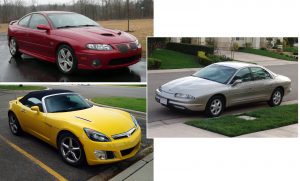 I mean, it might be nice to have modern day GTOs or 442s sitting in Pontiac or Oldsmobile showroom, or even see a new Saturn Sky roadster launch. Could a reborn SAAB Sonnett sports car have appeared on retro-modern Darth Vader wheels? Thanks to economic downturns and the financial collapse of 2008, we’ll never know. However, as much as I might miss the what-could-have-been gems of these dead brands surviving, there is one thing to remember:

There is a potential dark side to this scenario.

You see, for a dealer to actually want to carry a brand it needs to offer at least some semblance of a ‘model lineup’, so every cool enthusiast coupe needs to be complemented by some basic sedans or SUV in different sizes. To accomplish this, it’s almost certain that General Motors would do what they did for decades: do some tricky badge engineering. Use the same car again and again and again to save development costs and reap the profits.

Let’s say each brand needs a ‘small sedan’ competitor in the lineup. We can start with a Chevy Sonic, a car that is likely to come up if you just type ‘car’ into Google Image Search and a random four wheeled conveyance appears. For each brand, GM would merely make some cosmetic changes and possibly a few modifications to the suspension tuning.  Take a look below (it’s a busy week, so I apologize that these are a bit rough, but you’ll get the idea): 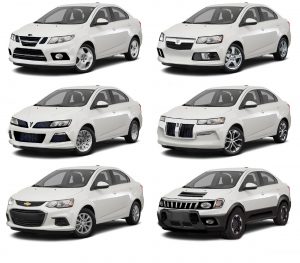 Despite this total ruse, General Motors marketing would use glowing words to make these essentially identical cars sound like unique representatives of their respective brands. Here is some of the vibrant prose extolling the unique virtues of barely different versions of exactly the same car:

“Born from jets, the 9-0 is a remarkable new car from the European engineers at Saab”

“The Reeflex is just what you expect from Saturn- the unexpected”

(….maybe those red gauge lights inside? Is that exciting? I did add ‘Bandit’ wheels at least)

“Altair- because innovation is a tradition at Oldsmobile”

(…the large double-snout grille looks sort of Pontiac-like, but it is meant to bring back the double grille style of Oldsmobiles in the heyday of the sixties and seventies. Plus, it’s sort of like the latest BMW giant-snout noses that remind me of the dog grooming van in Dumb and Dumber, where the ‘most annoying sound in the world’ that they make is IDENTICAL to the noise of the seatbelt buzzer in my 1990 420SEL)

“Hummer presents the H-0: the small car with the huge sense of adventure”

(…warning: you might get stuck driving over wet leaves in this thing. Actually it would help to bring the fuel economy average of the brand down if Hummer had survived as a gasoline brand before being ‘reborn’)

I’d like to think that this scenario wouldn’t have happened, but the temptation would likely have been too great. Admittedly, GM has been offering a bit more differentiation today where they had once simply done the bare minimum to add identity to nameplates, particularly during the seventies and eighties. 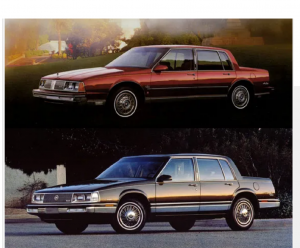 Buyers can still be surprisingly ‘brand loyal’ to cars that were the same underneath, and they seem to believe some of this silly hype even today. For example, a person I know wanted to look at a GMC truck over a Chevy ‘since they’re really more heavy duty and the brand knows trucks’. Yeah, sure.

Are buyers more sophisticated today than they were before the Finaciapocolypse? I’d like to think so, but nobody has ever gone broke underestimating the intellect of the buying public, and I fear that given the opportunity, The General might have tried again.

Read All My Posts »
PrevPreviousParts Bin Puzzle: Can You Guess The RV From The Movie ‘RV’?
NextMeet Two Austin Partners: Cold StartNext