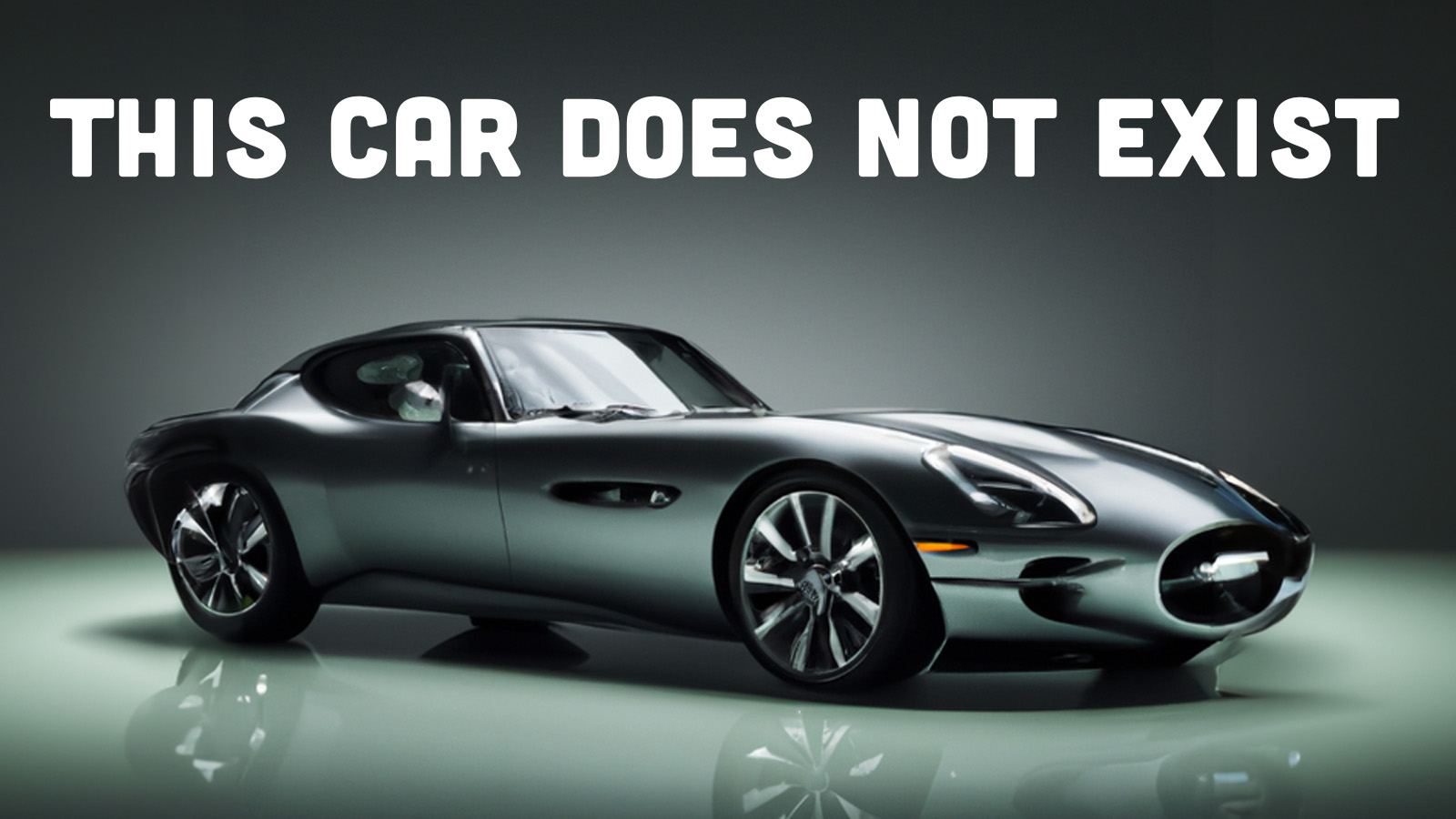 In many ways, we live in fascinating times. Not all ways, of course, but there is something to be said for existing in an era where you can have the collective knowledge of the world or filthy pictures delivered to you via a small oblong in your pocket and there are no fewer than six Cheez-It varietals available to nearly everyone with minimal effort. It’s a glorious age. It is also an age where you can send a far-away computer a string of text about a car, and that computer, using arcane and unknowable algorithms, will create an image of that car, just based on what you typed. The artificial intelligence system that does this is called DALL•E 2, and people have been asking it to create some incredible cars. I’d like to show you some of them now, so please set down your opium pipe or hang glider or struggling alligator and pay attention.

I should note that I’ve dabbled in this sort of thing before, but I have only had access to a much more basic version of this software, once known as DALL•E Mini but now called Craiyon. The samples I’m going to show you now were made with the full version of DALL•E 2, which produces substantially better results than the crap I was playing with.

That better version is invite-only access, and I’m just on the waiting list. So I can’t play with the good toys yet. 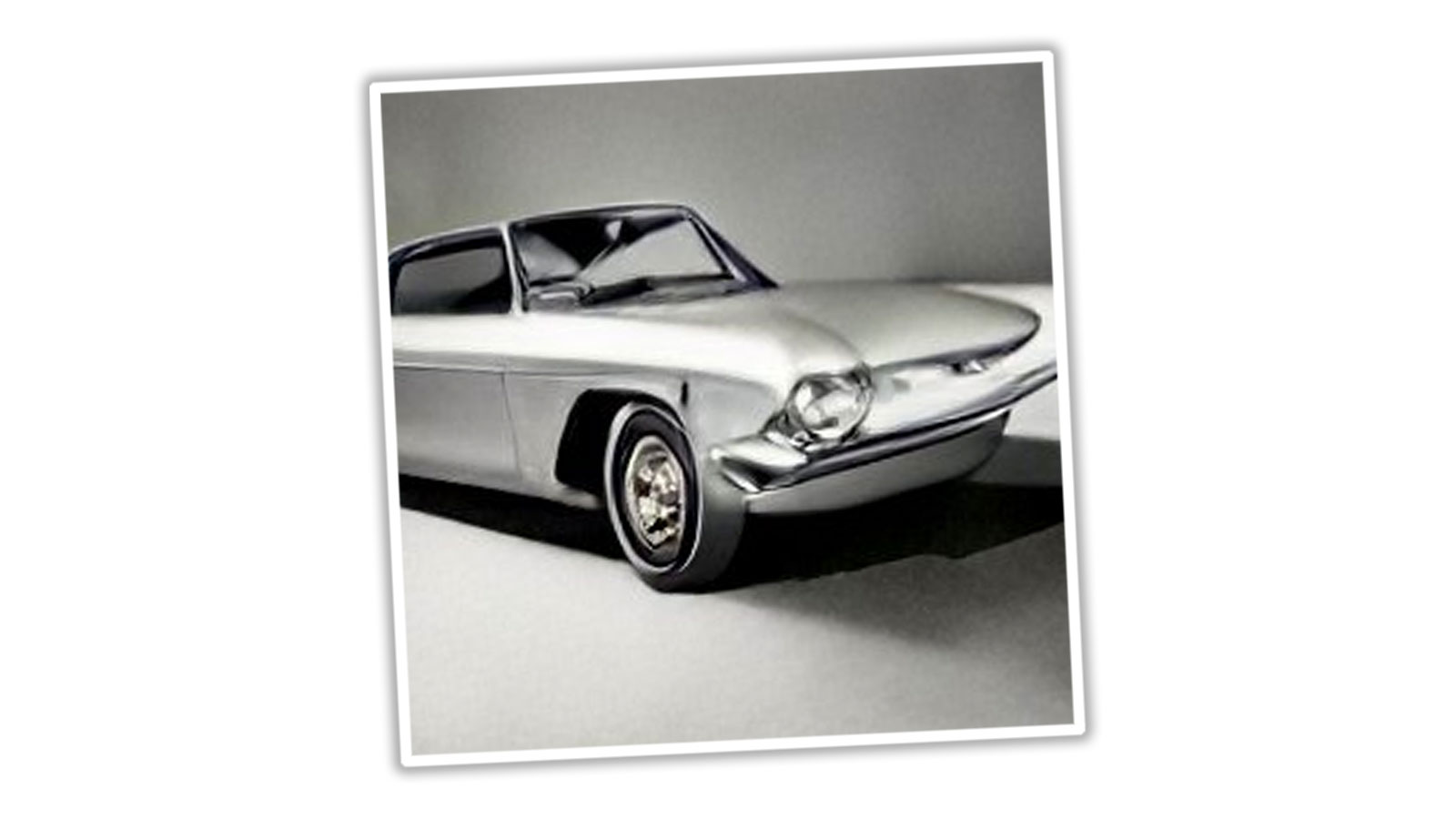 See? It’s impressive, and you can tell what it’s going for, but it’s very wonky. Let’s try another prompt, this time one that’s the exact same as one used by someone with access to the full DALL•E 2 system. So, here is “A 2025 Citroen DS Concept, studio lighting.” from the cut-down version: 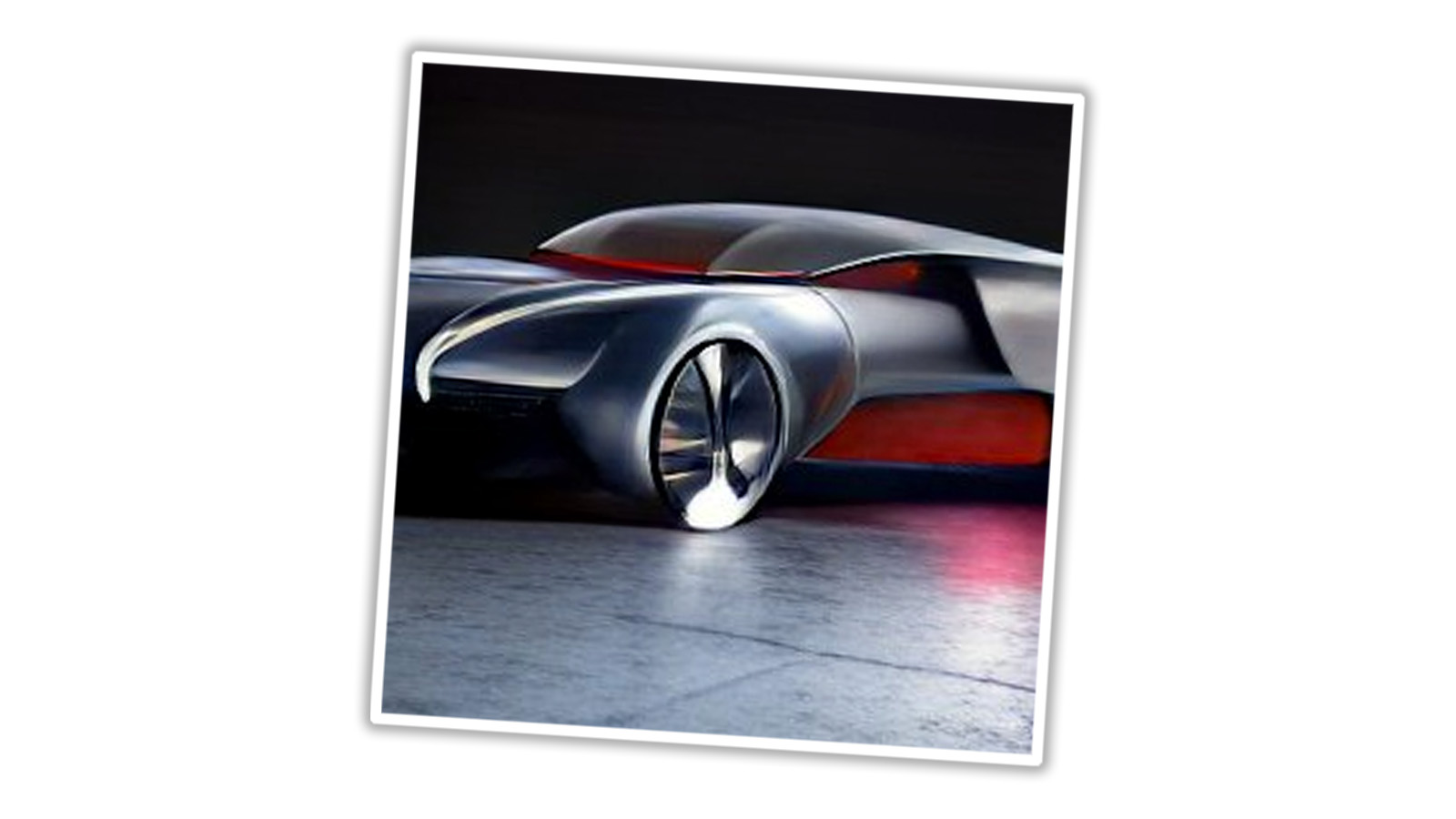 Okay, that’s evocative, sure. But look what that same prompt gives you with DALL•E 2: 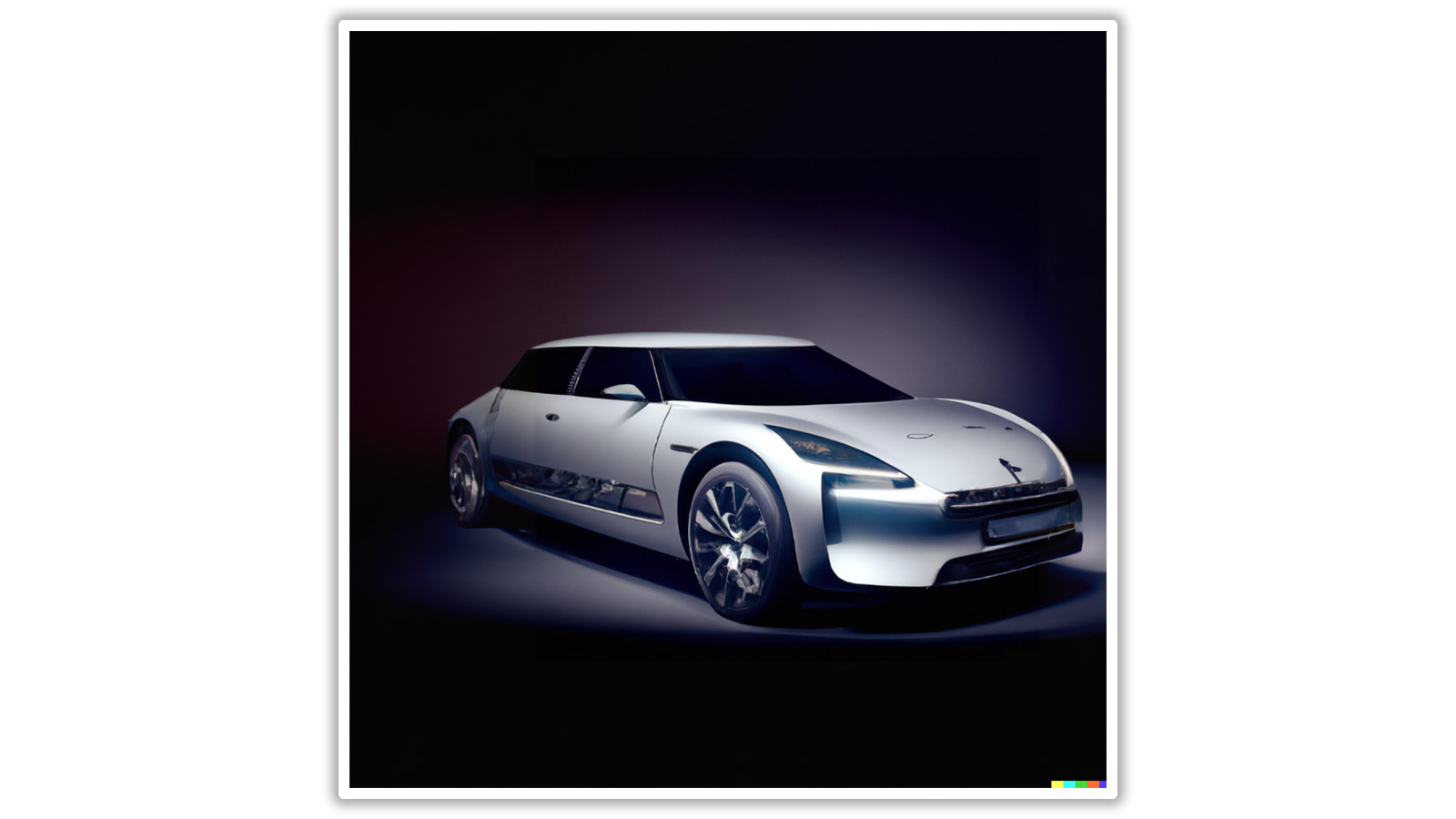 That’s a much more coherent and detailed rendering of a Citroën concept that doesn’t exist. That same experimenter, named Jakub, also tried out two other imaginary 2025 concept cars, including a wonderful-looking Trabant: 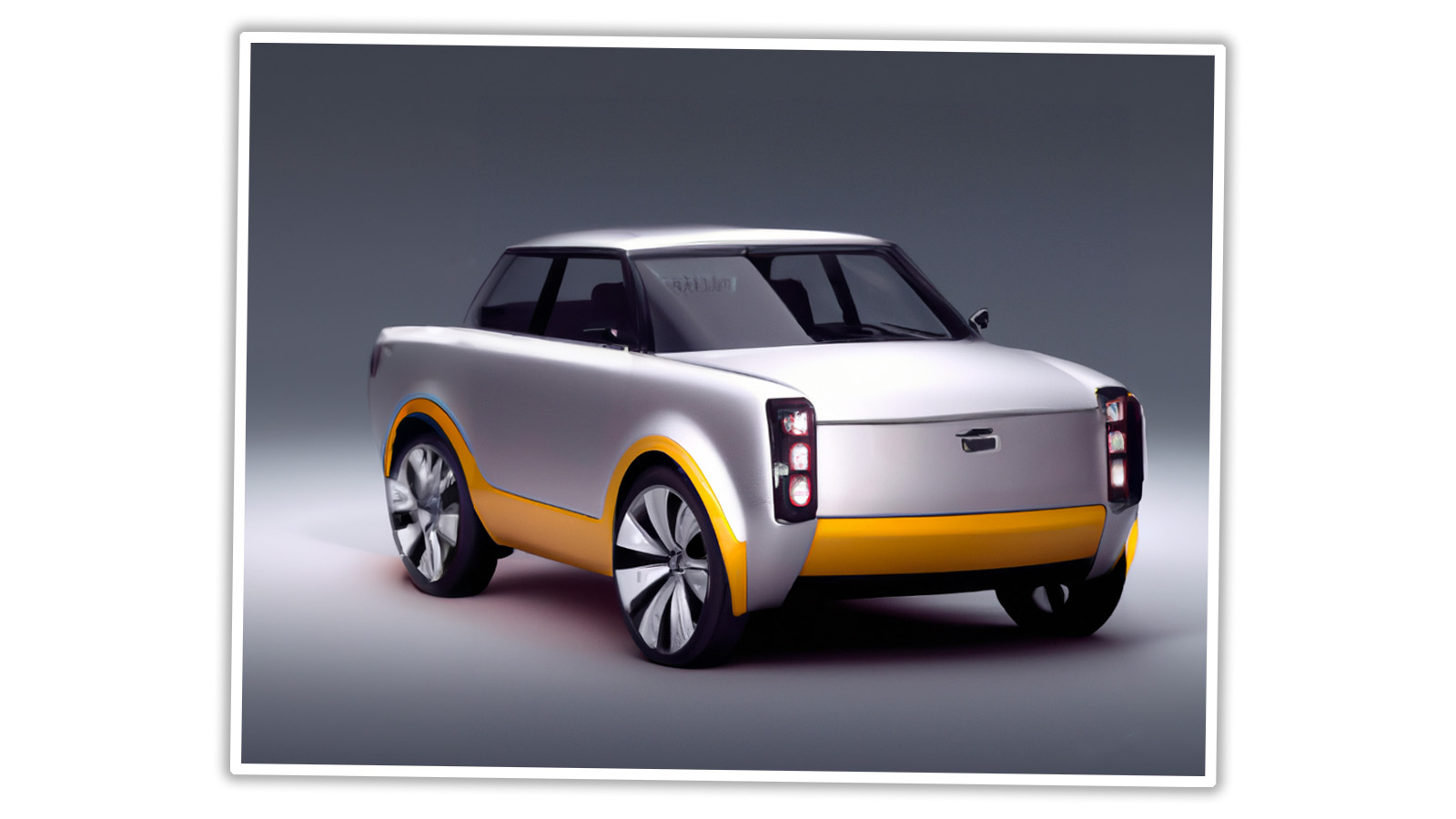 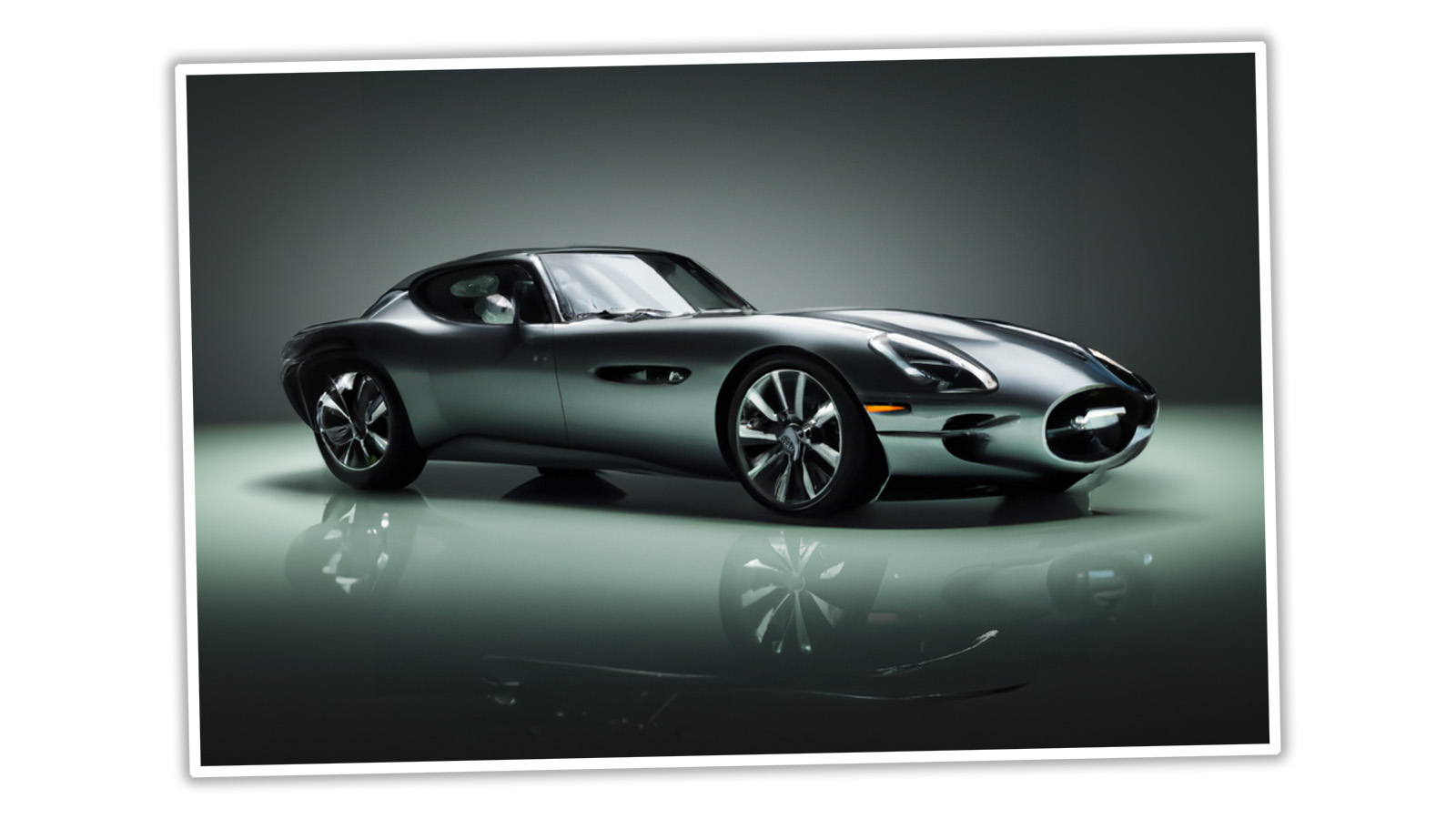 That looks great! I think the rear quarter is especially nice. This could actually pass as a 2025 Jaguar concept car, I’d think.

Some users have gotten really creative with this; here’s an animation of “unmodernizing a Tesla”:

What I love about this one is how well the AI seems to give the illusion of “understanding” (it doesn’t, but still) the visual vocabulary of different car eras, while still keeping some crucial Tesla-design markers intact. You get skinnier tires and chrome bumpers and more upright proportions but never a grille, all of which keeps the older versions of the cars looking plausibly Teslerian. 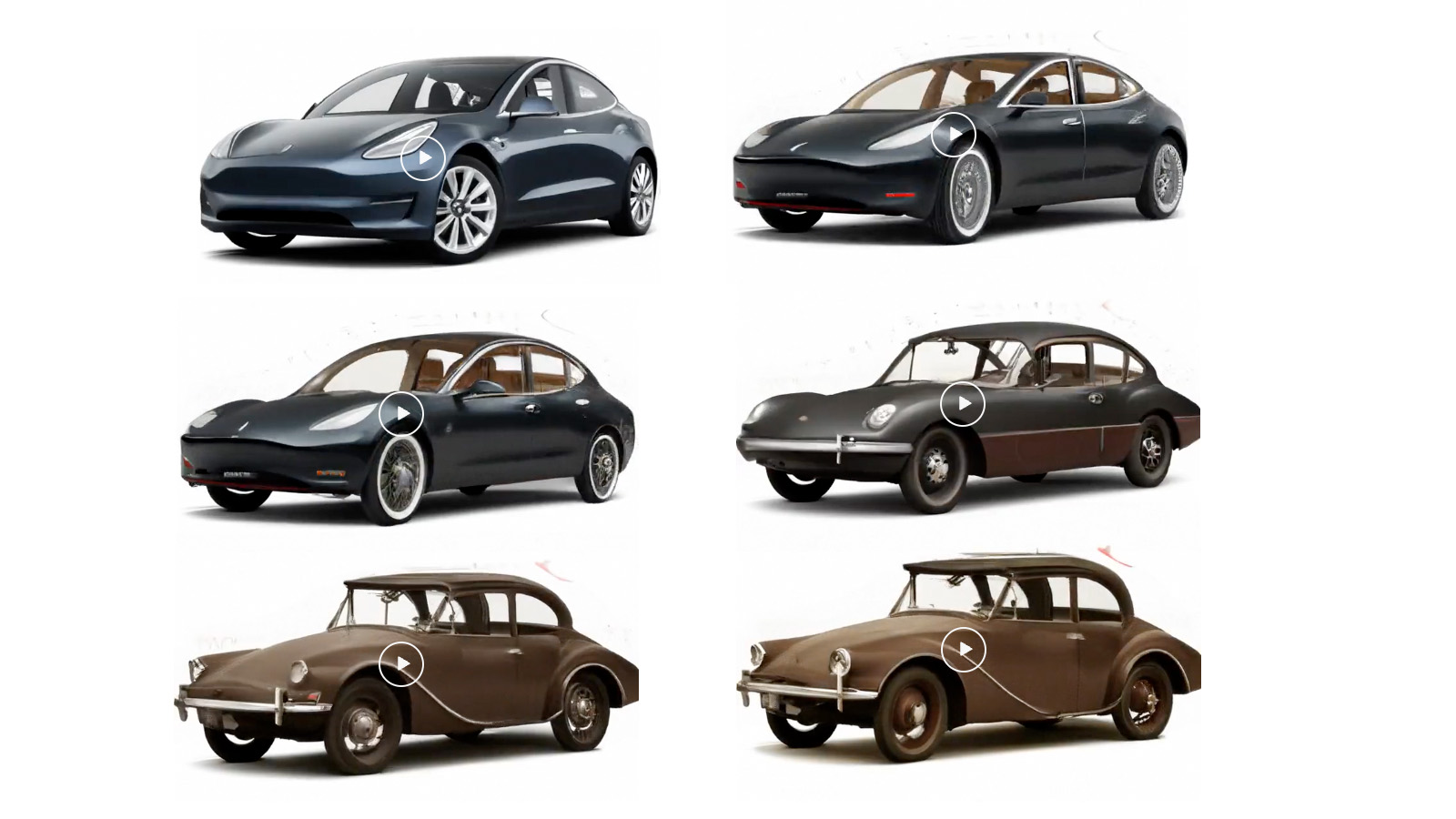 I mean, look how great some of these look! I love the ’50s/’60s one on the middle right, and the two in the bottom row feel a bit like some 1930s European rear-engined car that Porsche stole ideas from while designing the Beetle. There’s definitely a design lineage demonstrated here, and that’s incredible.

Speaking of Tesla, there’s some fun, kinda snarky prompts, like “Tesla pickup truck but instead of being a massive eyesore it looks as beautiful as the rest of their cars, 3d render, unreal engine” which results in something that looks a bit like a Ford Ranger Lightning, if that was something that existed, along with some other more Tesla-like designs, even if doors and door handles really seem to confuse the AI: 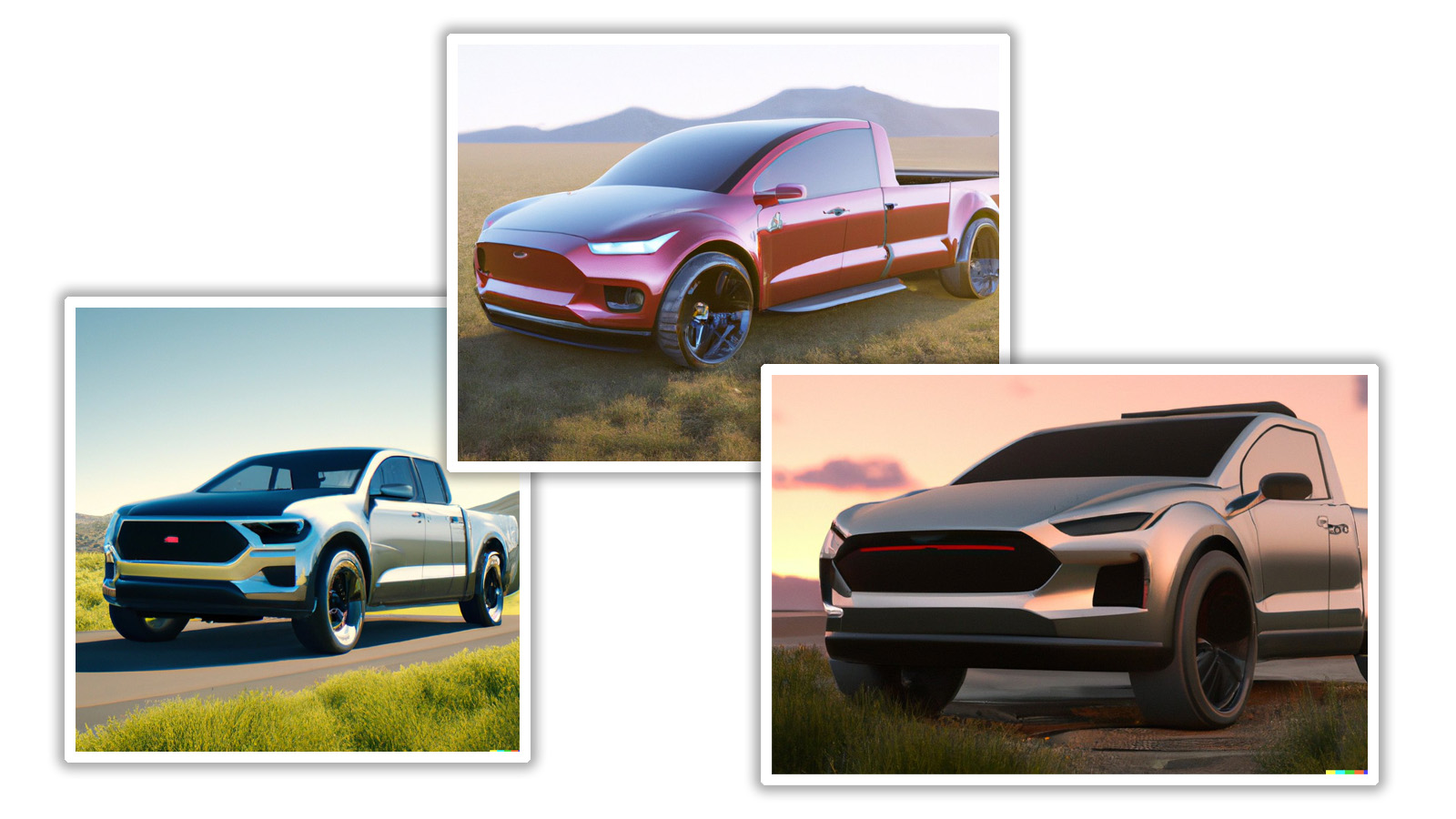 Unsurprisingly, there’s a lot of people trying Tesla stuff, but I want to show one more example, because these results are especially good. The prompt is “Steampunk Tesla Model X, digital art”: 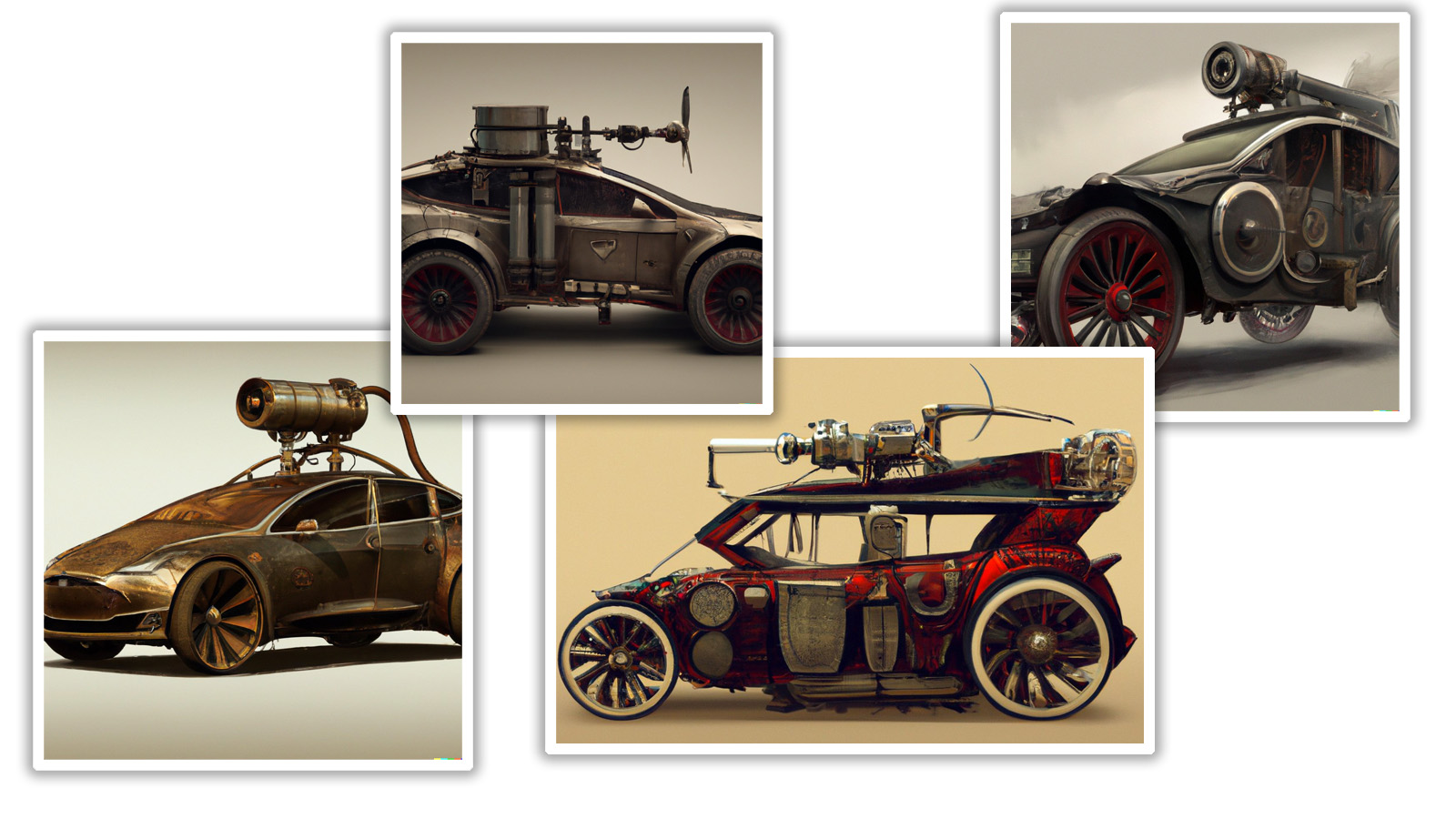 Okay, let’s get away from Tesla and on to more open prompts, but still involving the past, and evocative. Something like this one: “a 1920s photo of a futuristic car, sitting beside an old house.” That gives this result, which feels like a film still from a documentary about a largely forgotten inventor who could have changed the world if not for some kind of scandal involving, oh, a Poseidon-based sex cult or something: 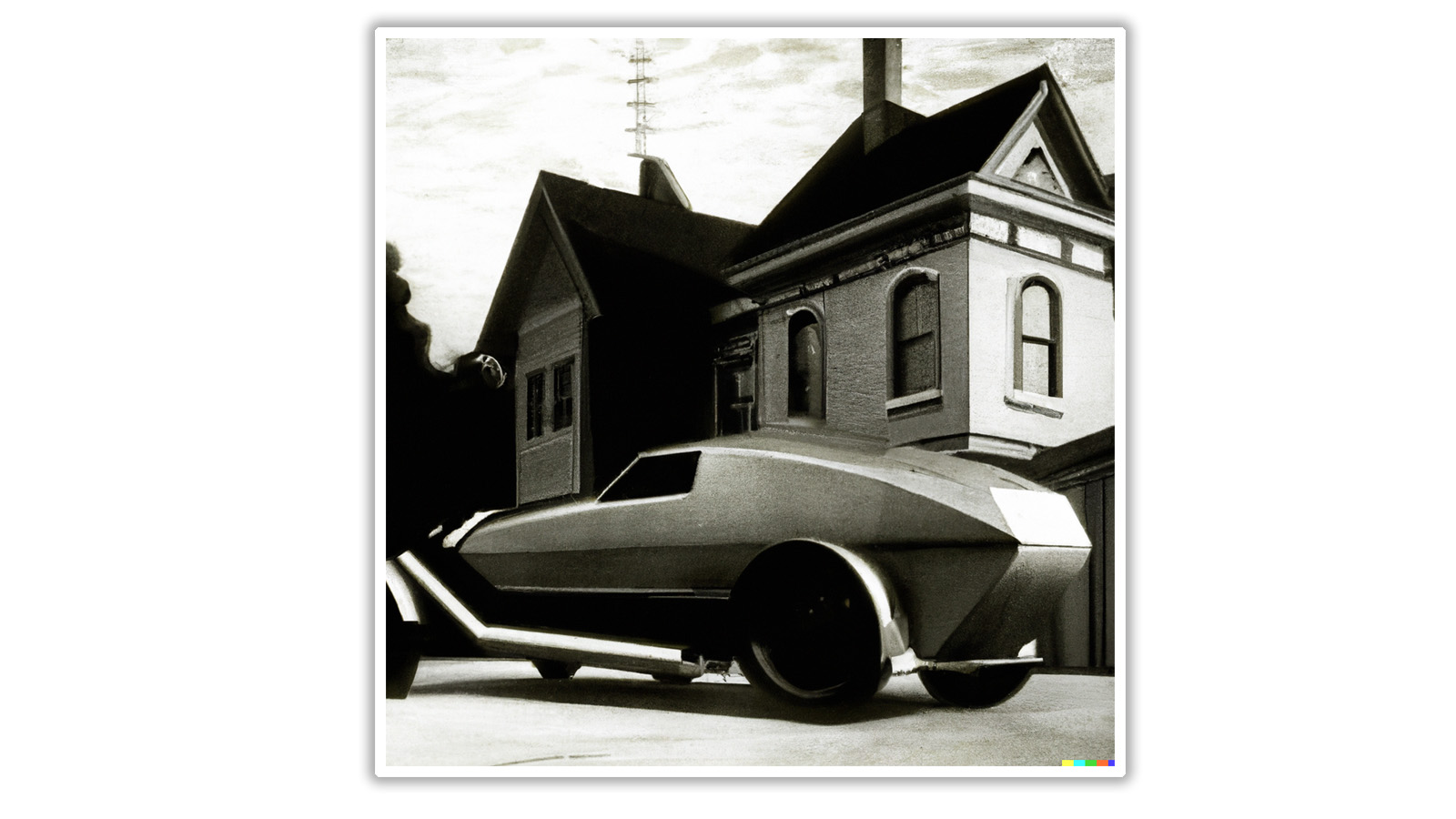 That doesn’t just feel like a futuristic car, it feels like what a futuristic car would have been imagined to be in the 1920s, which is the sort of nuance that makes all of these truly incredible.

Okay, let’s look at one more. This one is also a great prompt, from a Redditor named RifeWithKaiju: “Silent film version of the Deloreon [sic] from Back to the Future”: 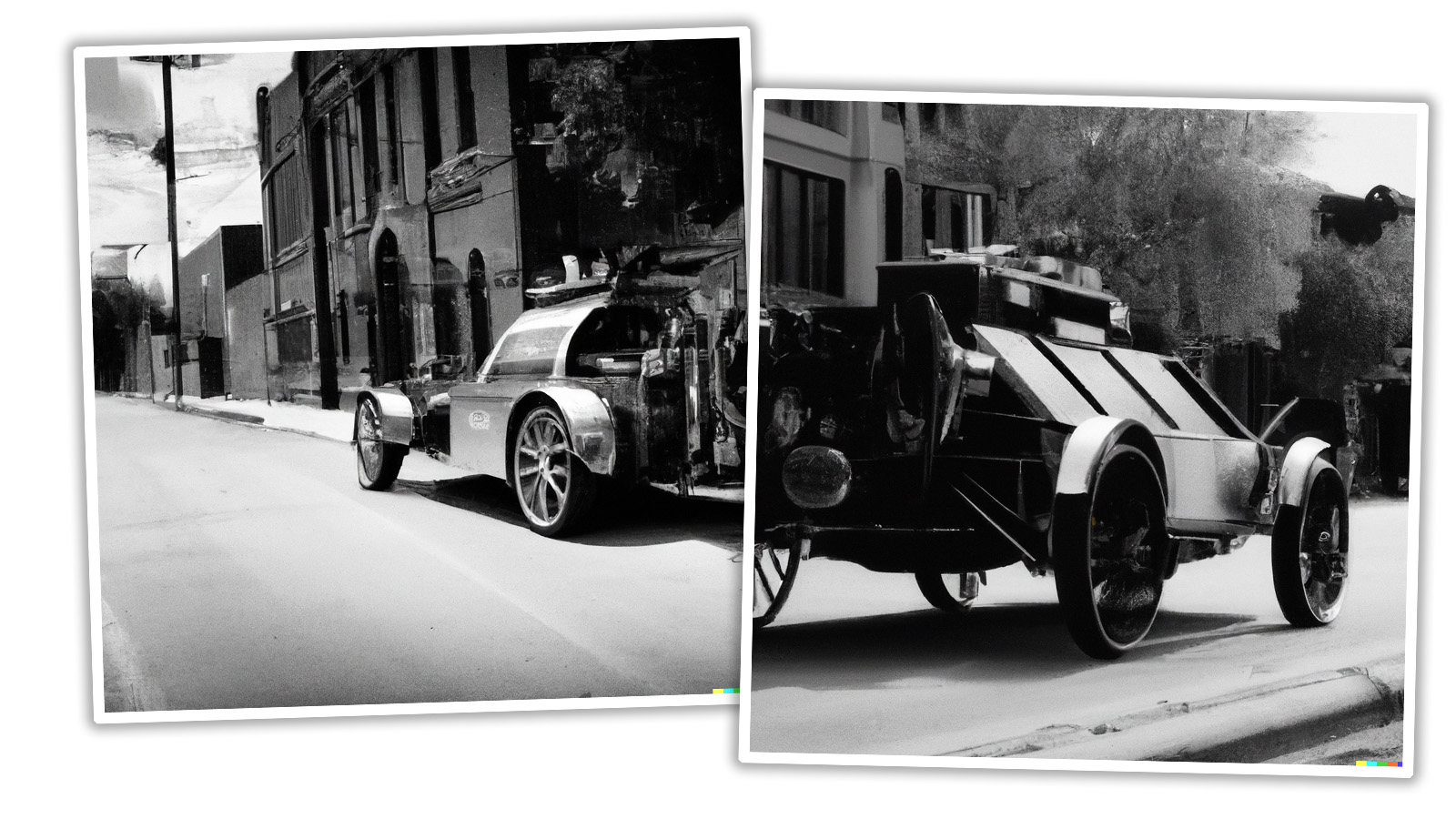 Again, we have this black box of an AI doing some quite complicated and subtle things; the car is clearly a 1920s era, but it’s laden with the same sort of extra equipment that the actual Back to the Future DeLorean is to make it into a time machine, and that equipment even feels more 1920s-appropriate as well.

At this moment, so much of AI is a black box, and I’m not sure anyone, even the people behind DALL•E 2, really, really know what’s going on amongst all those if-then statements and branching decision trees and sparks and whatevers. But. the results are at once impressive and thought-provoking and maybe even a little shocking, and I’m delighted to see that, and I hope to see much more.

Also, I hope I get off that waiting list. I want to try this thing out myself!

I'm a co-founder of the Autopian, the site you're on RIGHT NOW! I'm here to talk to you about taillights until you cry and beg me to stop, which I absolutely will not. Sorry. Hug? Also, David's friend.
Read All My Posts »
PrevPreviousI Joined 650,000 People At The Humongous Oshkosh Air Show. Here Are The Wildest Airplanes I Saw
NextCold Start: The Yellow-Eyed Stare That Always DelightsNext