I Joined 650,000 People At The Humongous Oshkosh Air Show. Here Are The Wildest Airplanes I Saw

Over the weekend I finally achieved a dream that I’ve had for years: I attended EAA AirVenture. This year was the biggest yet for the festival, and it’s easy to see why. The event is so infectious that you’ll walk until your feet are sore just to see another plane. It’s so fun you don’t even need to like planes to enjoy it, either.

I’m going to highlight specific planes in future posts. This one is about how awesome the event itself is.

On Friday morning, my fiancée, Sheryl, and I departed our tiny apartment bound for Oshkosh, Wisconsin. Waiting for us was the Experimental Aircraft Association’s 69th annual fly-in, AirVenture. But this isn’t just a bunch of pilots meeting up, it’s more than a week of some of the coolest planes in the world converging onto a little patch of Wisconsin for an absolutely massive festival. AirVenture is one of the largest plane gatherings in the world, and for the week of the event the air traffic control tower at Wittman Regional Airport claims the title of the World’s Busiest Control Tower.

The people in that tower have a ton on their plate. Throughout the event there are constant arrivals and departures (sometimes flights of a couple of dozen or more planes together), helicopters buzzing the grounds, ultralights circling camp, air show performers, and more. And keep in mind that these controllers are working with everyone from brand new pilots to pilots with decades of experience.

This year was the biggest yet, with record attendance of 650,446 people. The totals on the planes aren’t fully out yet, but there were 3,200 show planes, including 1,400 vintage, 1,156 homebuilts, and 369 warbirds. Mind you, those are just the show planes, not attendees or those camping. In the past, AirVenture pulled in over 10,000 planes in total. That number hasn’t come out yet for this year, but EAA says that some 17,000 landings and take offs had occurred by Sunday morning, and Sunday itself was chock-full of departures.

On the way to the event we had no idea what to expect. We paid for the Weekend Camping Package. For $214 we got camping for the weekend plus two-day tickets for two adults to attend the show. And as a bonus, one adult gets an EAA membership, which is something that I needed, anyway!

We knew that the convention would be huge, but I’m not even sure what compares to the experience of just camping there. Camp Scholler is next to the AirVenture grounds and I’d best describe it as an organized but chaotic city.

Camp Scholler is so huge that there are markets throughout the park for camping supplies and food. People get around on golf carts, motorcycles, and even baby Model T carts. I even saw someone using an old airport tug as a golf cart.

When we arrived at one of the convention’s gates Sheryl and I still didn’t quite grasp the scale of the AirVenture convention. If you went through the main gate you were immediately surrounded by the latest aircraft from a variety of brands. If you came in through the gate near the campground like us then you’re immediately flanked by exhibit hangars. And the airplanes just don’t stop.

The very first planes that we saw were eye-catching. One was this Rimowa F 13.

It’s a replica of the Junkers F 13, an aircraft designed by German engineer Hugo Junkers in 1919. It’s credited as being the first cantilever aircraft of an all-metal construction consisting of an aluminum alloy.

This replica is a reconstruction of an original F 13 that was disassembled and laser-scanned. These new planes come equipped with a Pratt & Whitney Wasp Junior R-985 nine cylinder radial making 450 HP and cost a pretty $2.8 million. From the sounds of it, this is the closest you’ll get to flying the real deal.

Another was this Icon A5, a pretty versatile vehicle.

It could take off from tarmac, grass, sand, water, or seemingly any surface you could get it to roll or float on. It even has a ballistic parachute and wings that fold up to allow it to travel inside of a trailer. Yes, that means that it could park in a regular garage, too. Most striking to me is the position of its Rotax 912 iS 100 HP flat four and the slim design of the empennage.

Sadly, with a tight cockpit and a usable load of 430 pounds you’ll have to be somewhat careful with the kind of recreation that you do with an A5.

Once I stopped being amazed by the tiny Icon we found ourselves inside of one of the hangar exhibits, where Sheryl attempted to land a Cessna 172 in a X-Plane-based simulator with me as her instructor. I got her to about 100 feet from the runway threshold, then things went all sideways and fiery.

[Sheryl’s Note: I can probably fly a plane straight forever, just don’t make me go up, down, or turn.]

Exiting back out into the sun, it was hard to miss the largest aircraft at AirVenture.

The United States Air Force brought a Lockheed C-5M Super Galaxy from Travis Air Force Base in California. I’ve always known that the C-5 was a massive plane, but seeing it in person was something else. The sheer size of absolutely everything on this aircraft is a sight to behold in person.

It’s an aircraft that demands your attention. And its auxiliary power unit (a small turbine engine that serves as a power source on the ground) has a deafening scream.

A crewmember from this aircraft spoke on a loudspeaker and said that measuring from the top of the tail to the ground, this thing is about as tall as a 7-story condo complex. Which, in person it’s easy to believe!

This year’s AirVenture celebrated 75 years of the United States Air Force, and military aircraft had a huge showing. In addition to the massive C-5M there were multiple Boeing C-17 Globemasters, a Boeing KC-135 Stratotanker, and a Boeing KC-767.

But that’s not all, as more military aircraft flew in AirVenture’s air shows including a Bell Boeing MV-22 Osprey, variants of the Lockheed Martin F-35 Lightning II, a number of North American P-51 Mustangs, a Vought F4U Corsair, a North American F-100 Super Sabre, and even a couple of MiG fighter jets.

The famous B-29 Superfortress named DOC made an appearance:

And really, that’s barely cracking the surface. Over in the warbirds area I fell in love with a flock of Douglas DC-3s. All of these planes were wonderful and each had a story to tell. There was the Yukon Sourdough, a DC-3 that started life as a C-47 Skytrain serving in World War II.

It then became an airliner for Canada’s Air North. It served in that role until EAA purchased it with the goal of making it a support plane. The association ended up going with a different DC-3 and selling this one. Somewhere along the way it stopped being airworthy. Then it was rescued by a pair of plane-loving brothers.

This C-47, Placid Lassie, is a veteran of D-day and other WWII campaigns. It, like the last DC-3, then began to serve as an airliner for decades. Eventually, it ended up abandoned at the end of a runway.

Thankfully, it was not only restored to what it looked like in military service, but it was even able to fly back to Normandy in 2014 for the 70th D-Day anniversary.

Near the DC-3s was a Ford Tri-Motor. This plane offered the experience of being able to take a ride in it, and you bet that I did and you’ll get to read all about it. Soon.

And that’s perhaps the coolest part about the planes at AirVenture. You can see things like a DC-3 at a museum, but chances are it hasn’t flown in a long time and could not fly without a restoration. Most of the planes at AirVenture flew in and will fly out. Many of them are based in places far away. And the vintage aircraft that provided rides for patrons were flying almost all day.

There was never a shortage of things to do at the event. You could pitch a chair next to the runways and watch planes take off and land. You could go to KidVenture, where your kids can learn about aviation and learn to wrench. There are endless exhibitor booths, food vendors, merch stores, and row after row after row of airplanes.

Opener wasn’t on the list, but it wowed the crowd on Saturday with a demonstration of its ultralight Blackfly eVTOL.

You could even start your own journey to becoming a pilot at AirVenture. And of course, there are scheduled air show demonstrations that last for hours. Perhaps all of these activities is why we often saw people who didn’t know a thing about planes, but they were smiling the same as we were.

To give you a sense of scale, check out this map:

Sadly, I wasn’t able to see everything at AirVenture. Honestly, I learned that the only way that you’re seeing everything in two days is if you don’t ever stop to really take in the beauty or history of a plane. And even then, you’re going to be run ragged trying to do everything so quickly. I sure was.

I also learned that the weekend is when people begin departing. There were a lot of planes there on Saturday, but AirVenture volunteers and tram conductors told me that the middle of the week is when the most planes and the most people are there. Sure enough, there were lots of open spaces between planes where other planes left long before I arrived. So there are tons of planes that I just never got to see.

And Sunday was pretty barren, as lots of pilots took off in the early morning hours to beat the afternoon heat and air shows. Still, Sunday did offer the unique experience of being able to watch various planes leave, including the big Air Force aircraft and lots of vintage planes. The C-5M probably made the grandest departure, in part for its sheer size.

As I further write about this experience in the coming days you’ll see a lack of ultralights and only some flying boats. We didn’t even get near the museum, completely missed the fly-in theater, and never got close to the model planes. Two days wasn’t nearly enough time to see everything.

Check out this Grumman G-73. It was next to one of many running and flying DC-3s. In the picture below, spot the Bally’s Bomber, a one-third scale B-17 that actually flies! 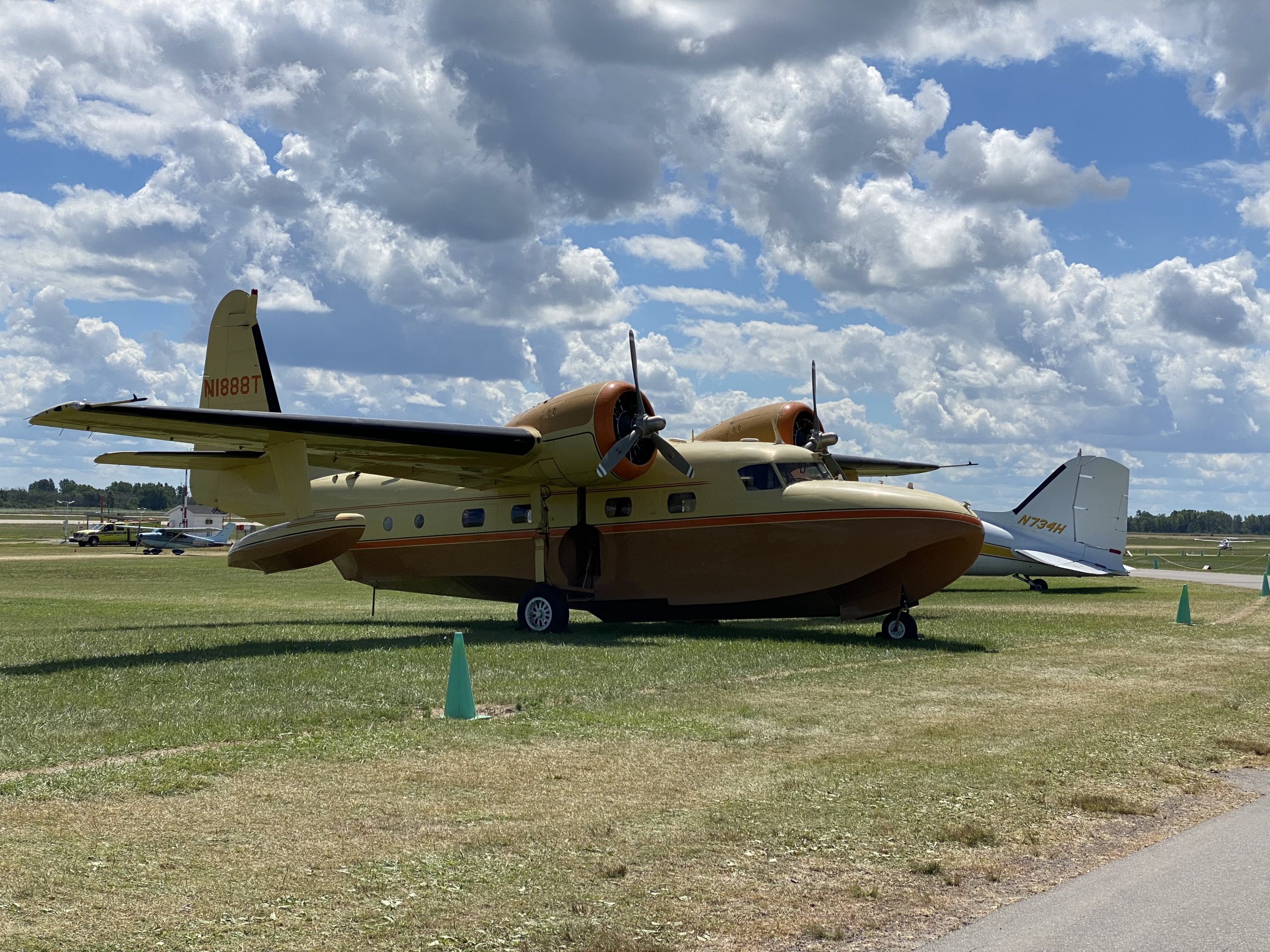 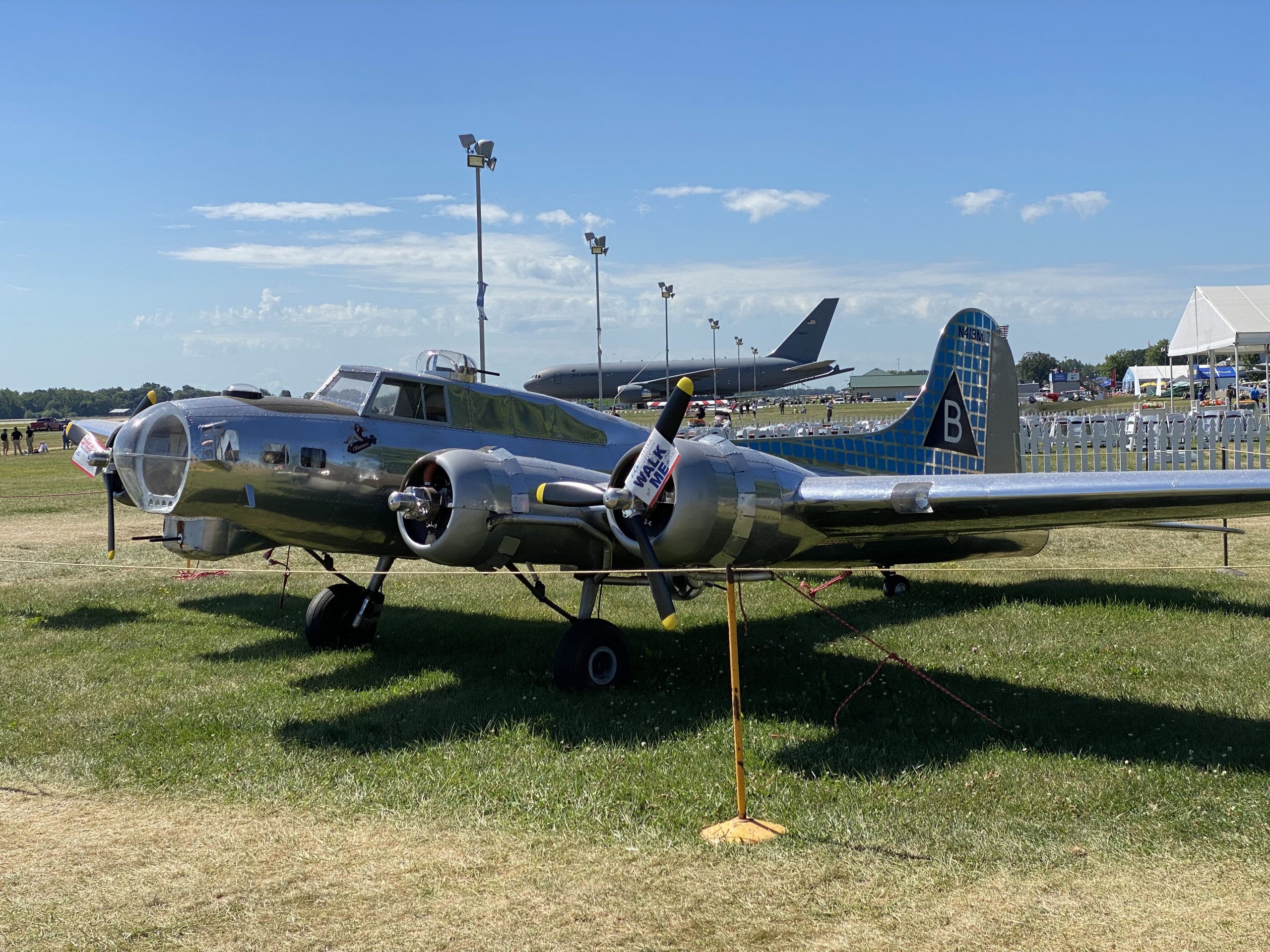 And this last one here is a Rutan Long-EZ, and yes, that’s a homebuilt!

Either way, I had the time of my life. This was more fun than taking a beat-up Dodge Grand Caravan off-road. It was more fun than off-roading a side-by-side in the desert. Heck, it was more fun than buying a car. If you’re thinking about going to an AirVenture, do it. I recommend giving yourself a few days out there, if not staying the whole week. That’s certainly my plan for next time.

Mercedes is a lifelong fan of all things powered by an engine. When she isn't driving one of her five Smart Fortwos or her 14 other vehicles she could be found in the cockpit of a Cessna 172 or perhaps swimming in any body of water that she could find. She also has a deep love for buses of all kinds. Please send her buses. mercedes@theautopian.com Instagram: @mistymotors Twitter: @Miss_Mercedes30 Facebook.com/neonspinnazz
Read All My Posts »
PrevPreviousChevrolet Redesigned Its Commercial Truck Headlight In Such A Confusing Way I Had To Get Our Designer To Explain It To Me
NextPeople Have Been Asking An AI To Make All Kinds Of Wild Car Pictures And The Results Are FascinatingNext