Most mainstream car websites don’t spend much of their time on styling changes to commercial vehicles that are almost exclusively sold to fleet operators. And while I can understand that, I feel like it’s worth reminding you that we are not most mainstream car websites. We’re The Autopian, dammit, and sometimes that means I’m gonna pay attention to the things that seemingly nobody else seems to give a shit about, like the lighting design of the sorts of trucks usually used to replenish your local Wallgreen’s supply of Nyquil and tampons. These trucks are all over the visual background of our lives, so when there’s a design change, as there was for the 2023 Chevrolet Low Cab Forward (LCF), I think it’s worth addressing. And this one confused me.

It’s a minor change, but one that becomes more baffling the more you think about it. It’s a change in design to the front light units. Here’s the previous version of the LCF’s lights: 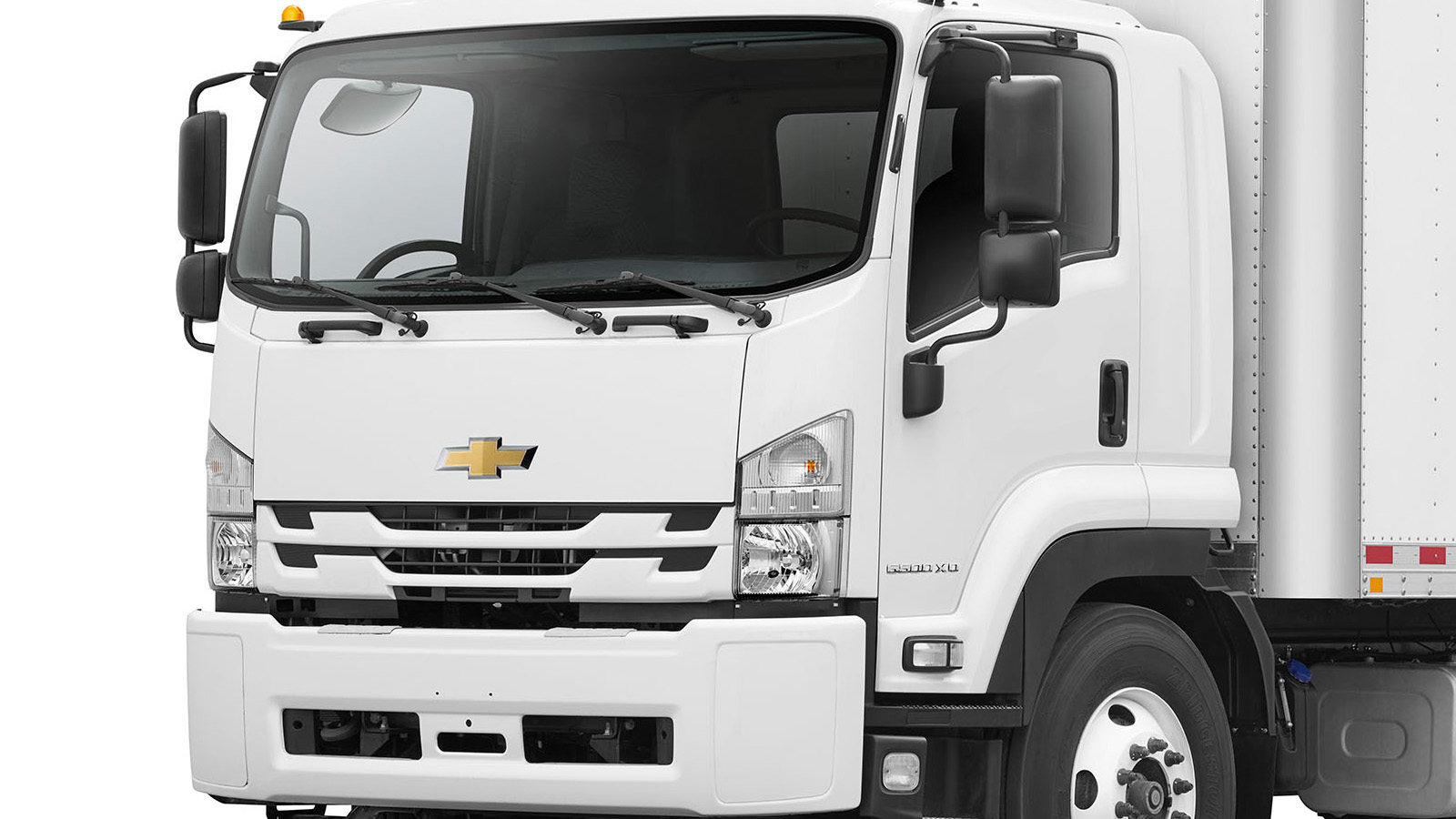 See those lights? They’re tall, slanted-top corner units, with a square-ish headlight area at the bottom and that trapezoidal indicator up top, separated by that little grooved silver bar. They’re fine for this application, nothing too special, but they seem modern enough and fit the overall look.

Okay, here’s what they changed them to:

Can you see that? Not really. COMPUTER! Zoom and ENHANCE! 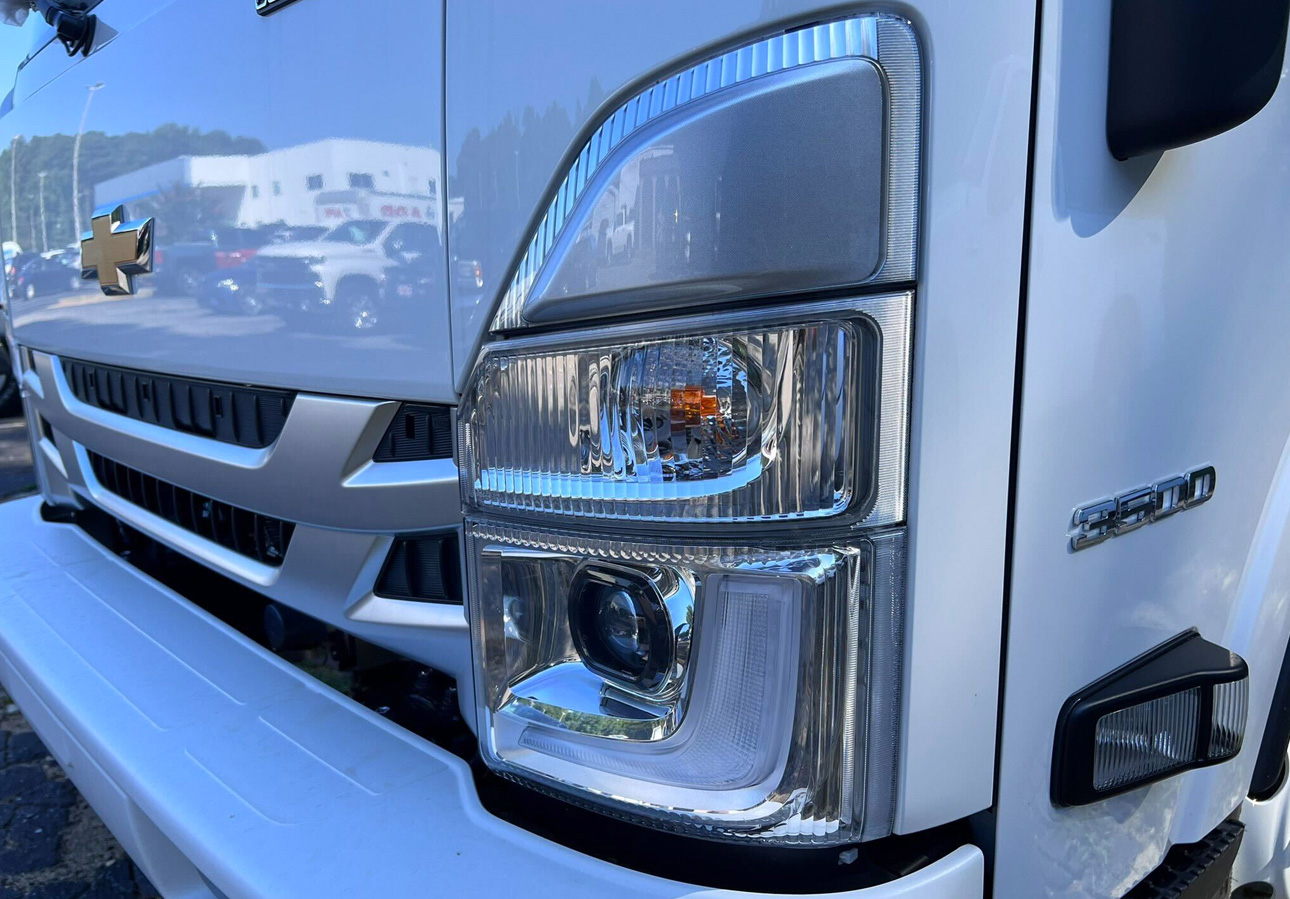 Okay, so what’s going on here? They seem to have upgraded to a projector-type headlamp below, added what I think is an L-shaped DRL, and reduced the size of the turn indicator, and filled in the whole top with a weird gray angled blank panel. I get why they need that filler panel– they had to fit the existing hole – but why did they bother with any of this at all?

It doesn’t look any better. They added a DRL, but really the turn indicator light could do that job, and likely has been doing it. Maybe that projector is a better light, but why couldn’t that have been fitted into the existing housing?

I’m confused why money was spent on this, and once I start thinking about it, I’m wondering why these light units have to be like this at all for a fleet commercial vehicle like this. Who does this help? Why can’t they just use cheap off-the-shelf sealed beams and indicators from some parts catalog? Who gives a shit? Am I the only sane person here anymore?

I realized I didn’t just have to shout these questions into the aether; I had an aether-dwelling real designer just a Slack message away: our own ex-Land Rover designer Adrian Clarke! So, I made a mockup of my super-cheapo light unit idea, sent it off to him, and demanded, angrily, that he explain what the hell was going on with this confusing mess of a commercial truck lighting redesign precisely one metric nobody gives a shit about.

Incredibly, he gave me an answer:

Cast your frazzled brains back to when we designed our Cab Over pick up truck, and remember I talked about Chevrolet’s offering in the commercial market, the Low Cab Forward?

Don’t take your socks off, I’m about to knock them off for you. Because Chevrolet has flexed all its forward thinking design muscles to give the venerable work horse a substantial upgrade for 2023. Hold on, because this is exciting. I literally had to duct tape Torch to his overseer’s throne because he got so overstimulated.

And not only that, in typical GM fashion they’ve half assed it in the worst way possible. I mean, we’re all capable of half assing things from time to time (I mean, have you seen this website?). But only GM has truly mastered the art of putting a load of effort into making absolutely no effort whatsoever. How do they do it?

And here’s the new one:

Headlights and taillights are just about the second most expensive component on any vehicle to tool up for, after the body in white. Each light costs a cool couple of million, especially now they have adaptive features and fancy start up animations when you unlock the vehicle. They also form a critical part of a vehicles identity when viewed from the front or rear, known in designer bullshit speak as the ‘Down the Road Graphic’ or DRG. So come facelift time, although they are expensive they are usually along with the front and rear bumper panels, the things that are changed, so everyone can tell it’s the upgraded model.

Because that’s exactly what you want on a working commercial truck, expensive dedicated parts on the vulnerable extremities. When the new driver you’ve just hired might be unfamiliar with the rear entrance of the local widget factory and whoopsie they crunch a corner, it’s new headlight time.

Except because of supply chain issues and chip shortages we might have a new headlight for you next week, sir. Days of downtime and additional expense because GM thinks having lights that can strip paint is better for your business than off-the-shelf replaceability. But GM are conscious of the cost of doing business. For themselves.

Look closely and you can see the top part of the new light isn’t a lens at all. It’s a silver blanking panel; that means they can use the existing body corner trim, saving them the cost of tooling up for a new part that fits the new headlight better. Genius. Sheer shitty looking genius.

Now, we’re nothing if not egalitarian here at The Autopian, so we’re gonna help GM out for free. After all who are we if we’re not in service of this colossus of American Capitalism? So I begrudgingly gave Torch the last unopened pack of dollar store felt tip coloring pens. As our resident lighting creative specialist (a real role that does actually exist – that’s how much importance OEMs place on lighting design) here’s what the lunatic came up with: 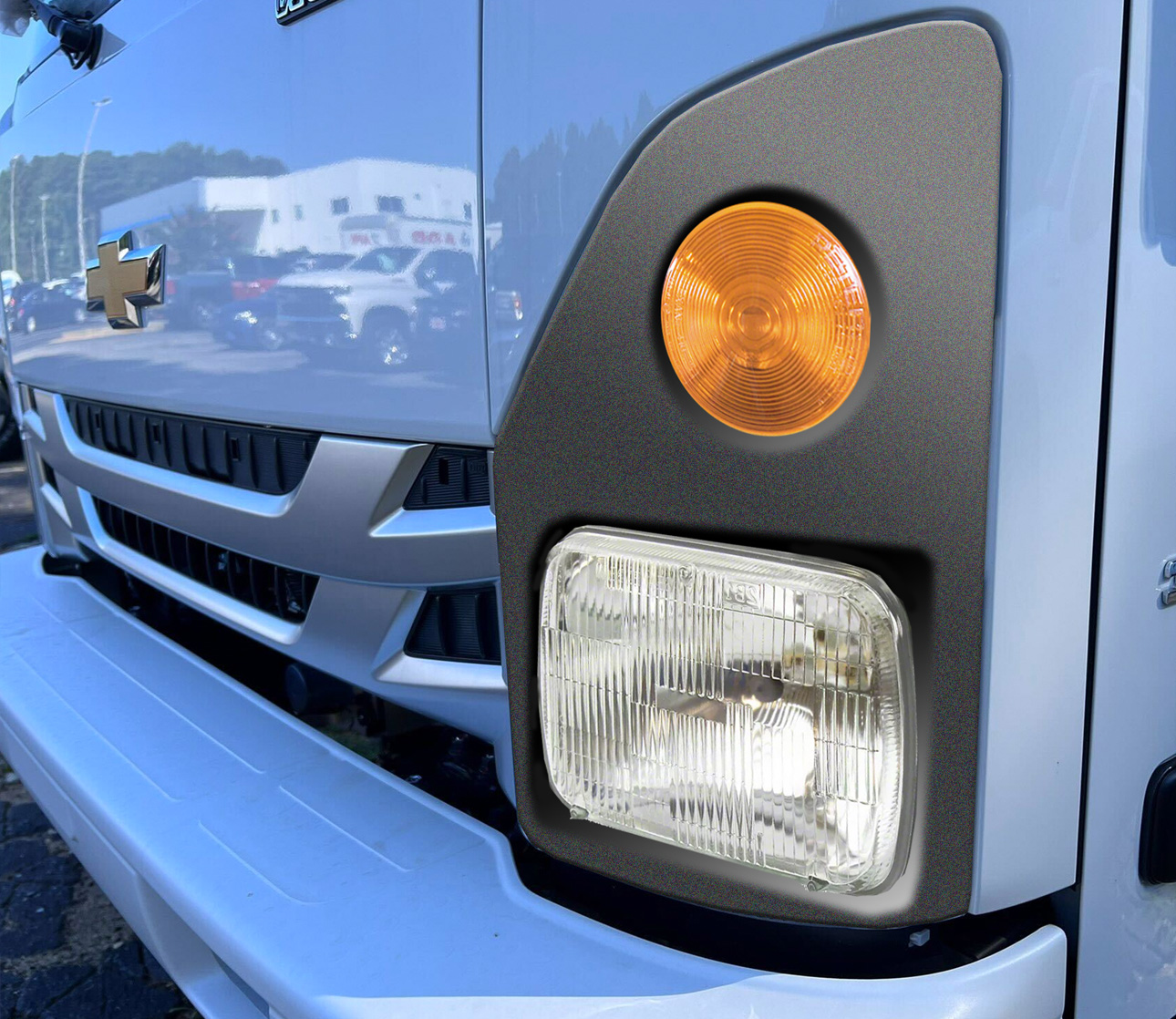 As you can see, its simplicity is the hallmark of its genius. It uses an off-the-shelf sealed beam unit and round indicator, both of which you can probably purchase at any gas station [Editor’s Note: Some grocery stores, even – JT ] in America. And they’re neatly held in place by a matte-black fill panel that covers the existing hole. Probably made in polypropylene because that stuff will take a cack-handed licking without complaint.

No more downtime while you wait for GM logistics to get its shit together. A fleet manager with a functioning brain would just keep a shelf full of these cheap parts in stock, so after a driver’s excuse me that Low Cab Forward will be back out on the road earning its keep in no time.

Design is about judging what’s appropriate for a given problem and coming up with an appropriate solution. Obviously here GM wanted to maintain the existing corner body work, which is not unreasonable. This saves tooling up and a new piece cost, because the previous part was used for so long it was practically free.

Even given that constraint, their solution is a bit perplexing. It’s like they got so excited at saving money they splashed it on a fancy new headlight, and got so carried away they didn’t realize it wouldn’t fit. Then they had to hastily come up with a silver panel to plug the hole, meaning they had to make a new part anyway.

No designer stepped back from a clay model of this in the studio and thought “man, that is a nice piece of work.” More likely they were given the headlight and told to make it fit, while spending as little as possible (seriously, if you can get away without spending anything that’d be great). Sometimes on low priority stuff like this, that is actually what happens, and not only at GM.

Thank you, Adrian. I feel somewhat vindicated in my thinking here. If any vehicle would be just fine, if not even better served with cheap-ass sealed beams and parts-bin generic indicators, this is it. GM’s stupid new lights simply aren’t, as Adrian said, the appropriate solution for the job.

And, remember, this time it’s not just me kvetching! A professional is backing me up! And, with that kind of power, I’m confident that now GM will not give one single, solitary, lonely shit.

UPDATE: As some commenters pointed out this is a badge-engineered Isuzu truck, so it’s them we should be asking questions of. They’re still part of the greater GM umbrella, but Chevy shouldn’t get the heat here, Isuzu should.

And here’s how they explain the headlight update:

Exterior cab refresh: The cabs of all 2023 N-Series gas models will sport a new look with a standard matte-silver grille replacing the white grille of prior model years (a chrome grille remains optional); redesigner turn signals with accent brow; and bi-LED headlamps with signature light that deliver more light and less heat than halogen bulbs in both low- and high-beam modes.

Okay, so LED lights, less heat, and that thing on top is an “accent brow.” But you know what? You can get sealed beam lights with LEDs now. I’m still not convinced. I bet fleets would take cheap-to-replace over this any day.

I'm a co-founder of the Autopian, the site you're on RIGHT NOW! I'm here to talk to you about taillights until you cry and beg me to stop, which I absolutely will not. Sorry. Hug? Also, David's friend.
Read All My Posts »
PrevPreviousOur Designer Isn’t Done Letting You Know That You’re Wrong About Big Wheels On Designers’ Car Drawings
NextI Joined 650,000 People At The Humongous Oshkosh Air Show. Here Are The Wildest Airplanes I SawNext