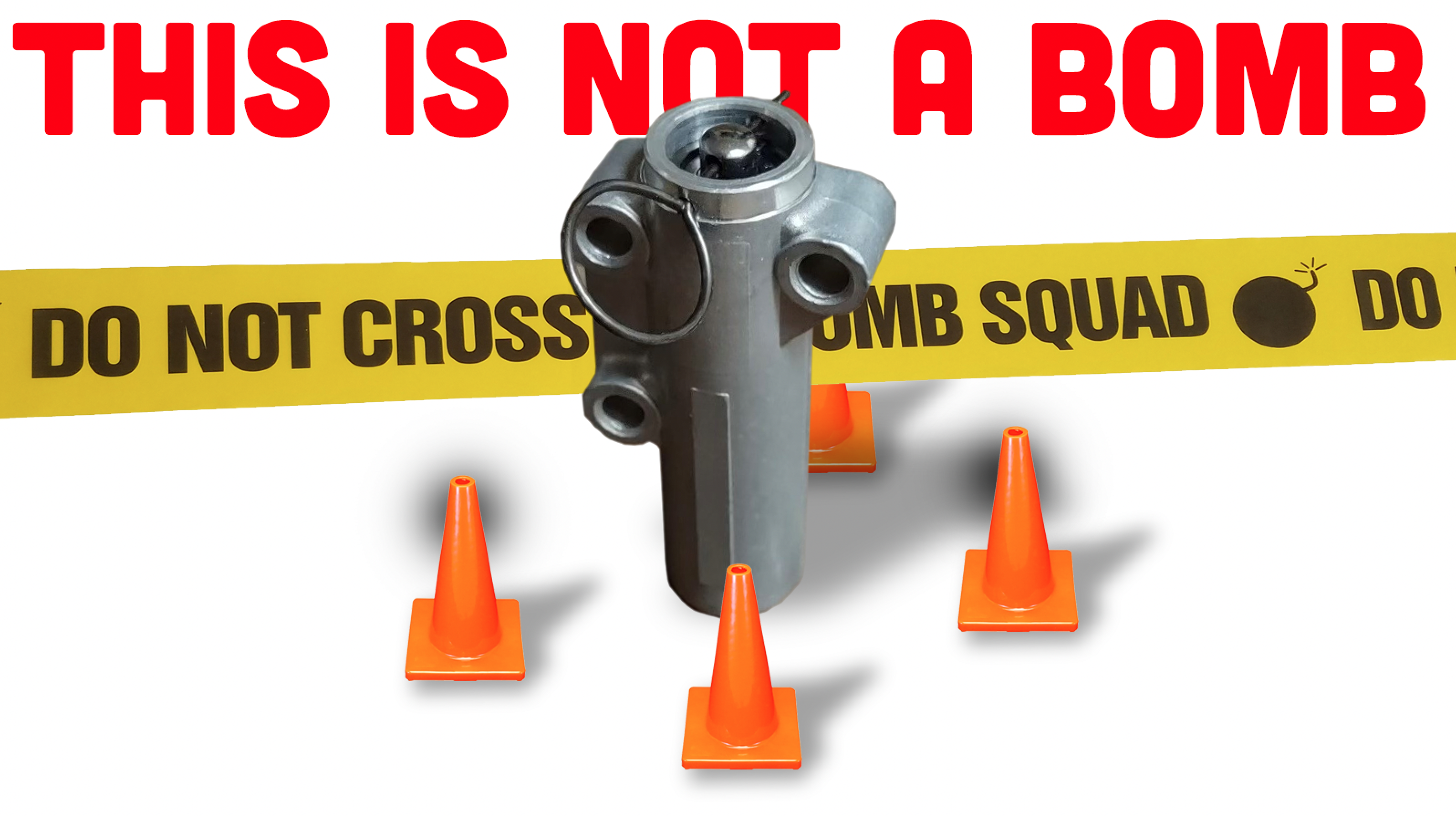 “This morning, we investigated a suspicious item that resembled a possible explosive device. Our bomb squad responded and safely removed the object,” writes the Salt Lake City Police Department, who had just evacuated part of an apartment building. The organization released an image of the “suspicious item” and, hilariously, it’s just a car part. Unsurprisingly, wrenchers on Twitter had a field day with this.

“The Salt Lake City Police Department is investigating a suspicious item that resembled a possible explosive device,” the Salt Lake City Police Department’s press release from yesterday begins. “This investigation started at 9:49 a.m. on Wednesday, June 29, 2022, when SLC911 received information about a possible explosive device in an apartment, located at 999 South Main Street. Officers responded, secured the scene, and evacuated parts of the apartment complex, including the center courtyard. The evacuations were done out of an abundance of caution.”

The release goes on to say that the “on-scene incident commander” asked for help from the department’s “Hazardous Devices Unit” which is “a member of Utah’s statewide Bomb Response Task Force and is accredited by the FBI.” The unit includes not just Salt Lake City Police Department members, but also support from “FBI-certified bomb technicians from the Salt Lake City Police Department’s Airport Division and the University of Utah Police Department.” The press release lists off some of the team’s capabilities just to show that these folks mean business:

Members of the squad are very experienced with live incidents and have extensive training in render-safe procedures, explosive destruction, blast mitigation, and post blast investigation. The Hazardous Devices Unit has full bomb and explosive recovery response capabilities, utilizing all the latest equipment and technology.

Wow, that all sounds pretty serious. This must be the most overqualified team of humans ever to have escorted a timing belt tensioner out of a building.

Oh yeah, that’s right — this grenade-looking device is nothing more than a spring-loaded belt tensioner/damper for a VW Passat, Audi A5, or Audi A6. Its job is to make sure the engine’s timing belt — which wraps around the crankshaft and camshaft sprockets to make sure the valves open at the right time relative to the pistons’ stroke (you want the valves open as each piston goes down during its intake stroke so you can pull in fuel/air, closed as the piston goes up during the compression stroke so you can seal the combustion chamber, open as the piston goes back up after the combustion stroke so it can shoot exhaust out, etc.) — is nice and taut.

Here’s a look at that timing belt tensioner/damper in-vehicle:

You can see how it pushes against a lever that’s part of a bracket to which the tensioner pulley is fastened. The tensioner helps to torque the bracket around the pivot bolt, forcing the pulley against the belt to keep the belt tight. The tensioner itself contains a piston that doesn’t just have a spring on its back side, but also oil; so the device isn’t just there to help keep belt tension, but to act as a hydraulic damper to keep that tension steady under loads/vibrations so the pulley doesn’t bounce around and throw the belt off.

This would be quite bad, as that belt flying off or even slipping could let the pistons rise at the wrong time, and if that “wrong time” happens to be when the valves are open: BANG, you’ve destroyed your engine. This has happened to our very own Jason Torchinsky not too long ago:

Rock Auto, your favorite site for dirt-cheap car parts, actually does a great job breaking down how a hydraulic belt tensioner works, and even includes a cutaway of the very “possible explosive device” that led Salt Lake City Police to call the bomb squad and evacuate an apartment building:

Because there’s a spring trying to force that piston out against a timing belt tensioner bracket/lever, the way you install these devices is you bolt them into place, then remove a pin (which does look like a grenade pin or a fire extinguisher pin), which allows the piston to apply pressure to the tensioner bracket. Here’s a look at a guy removing the pin from his timing chain tensioner (which is quite similar to a timing belt tensioner):

I called the Salt Lake City Police Department, and they told me they’d figured out that it is a timing chain tensioner (close enough). The department has been getting some hilariously snarky comments on Twitter about this, as you might imagine. Have a look:

I found what looks like weapons and ammunition. Should I call 911? pic.twitter.com/x9c95Zm1cB

Slcpd. I saw this in neighbors garage. Send help. pic.twitter.com/6nj5rpWU0B

LOL, all this for a timing chain tensioner!? Heaven forbid you guys ever get called out to a mechanic’s workshop. I’m sure we’ll hear all about it.

That's a timing belt tensioner. Please tell me this was a joke.

That is a goddamn timing chain tensioner

It’s the tweet from “Localized datum structure enjoyer” that resonates with me the most:

Give it back to that poor renter.

Seriously, give that thing back to the poor renter. They’ve got the real grenade right there under the hood of their VW/Audi, and it could go off any second!

Update (June 30, 2022 6 P.M. ET): The Salt Lake City Police Department, whom I applaud for having taking precautions in this instance but whom I’ll also poke fun at because mistaking a timing belt tensioner for a bomb is still funny, sent me this statement unsolicited after I published the initial article:

We approach every suspicious package/device call with the highest regard for safety. We have to for the wellbeing of our officers and our community members, we never let our guard down in these situations even if the object may appear harmless. We know that any object: speakers, computers, cell phones, radios, etc. can be converted into an explosive device. Our officers are trained to never become complacent. In this situation, our officers correctly assessed the situation and acted properly. Based on the witness statements, the fact that no one at the location claimed ownership for the device and that it seemed highly out of place, it was appropriate to notify our bomb squad so the device could be identified, handled safely and then tested to confirm there was no threat.  We treated this situation with an abundance of caution and are proud of our officers who handled this situation with intentionality and care.

Thank you for your interest in this story.