Good morning, and welcome to Thursday, or as my wife’s boss calls it, “Friday Eve.” Today, we’re going to see if size really matters, and take a look at two tiny, hard-working trucks. But first we need to decide which button-laden sedan takes the cake:

Wow, lots of brave souls out there, choosing British charm over Japanese reliability. Honestly, with both of these cars in front of me, it would be a coin toss for me. I’ve always liked Jags, but something about the weirdness of that Sigma speaks to me. 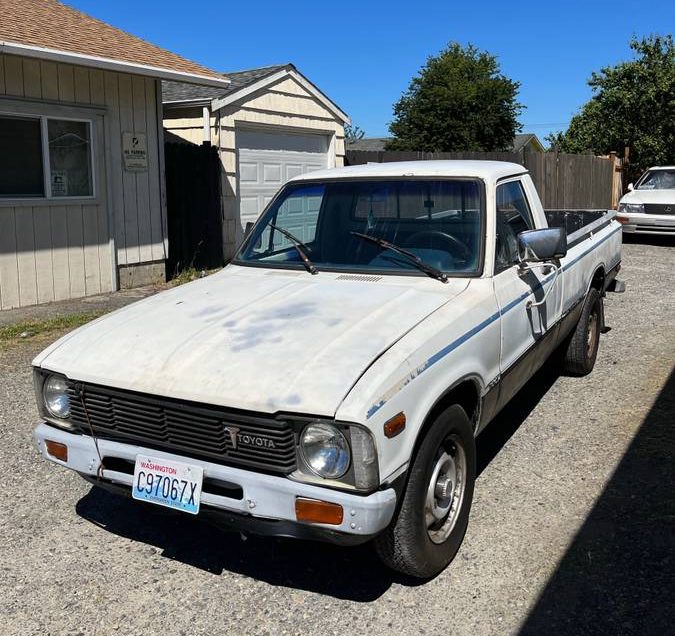 I’m surprised this truck has sat on the market for five days, actually. I fully expect, as I write this on Wednesday evening, to discover the link is dead come Thursday morning. But I already swiped the photos, and got all the information I need, so even if it sells, we’ll talk about it anyway. 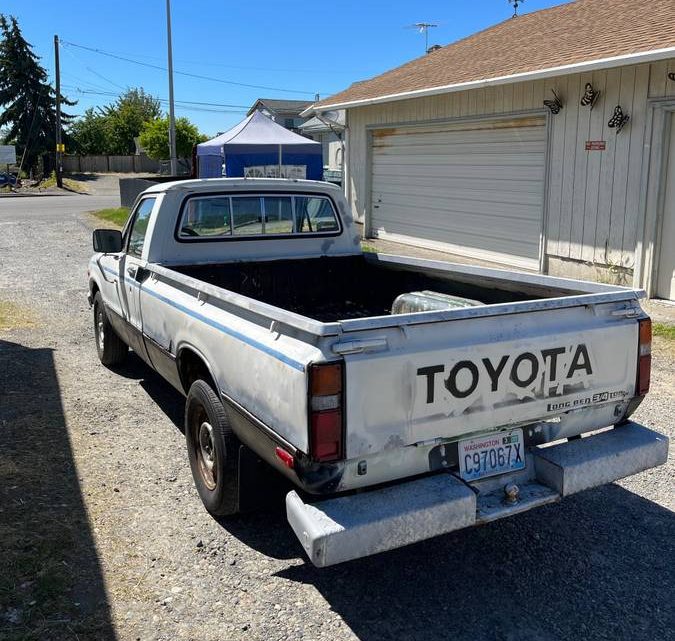 Toyota trucks are, of course, renowned for reliability and durability. It’s not uncommon to see 300,000 miles or more on the odometer, and while the rest of the truck may fall to pieces around it, the mechanical core, highlighted by that 20R/22R engine, will just keep on keeping on. (Or at least the earlier ones like this will; my ’88 with those stupid plastic timing chain guides sounded like someone threw a handful of pennies into it, because using plastic for such a critical component is idiotic. But I digress.) 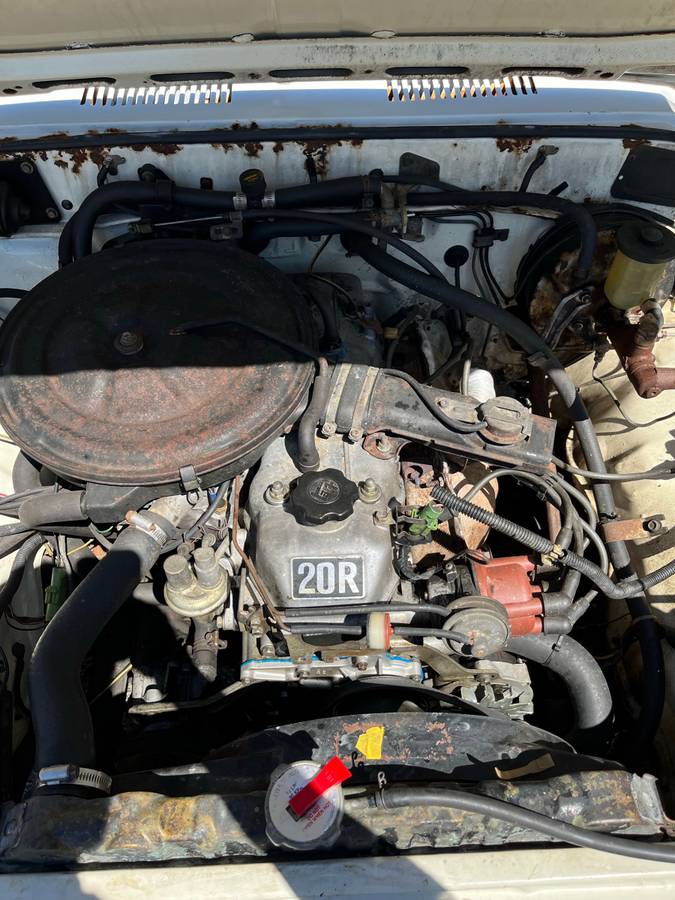 This truck does suffer from the other Toyota truck weakness: rust. It’s not terrible, but it’s there.  You can see the bed seams starting to go, and although it’s hard to tell with the bottom third painted black, I bet the door bottoms and rocker panels aren’t too pretty either. But it doesn’t have to look good to haul stuff, and I bet this truck does that just fine. 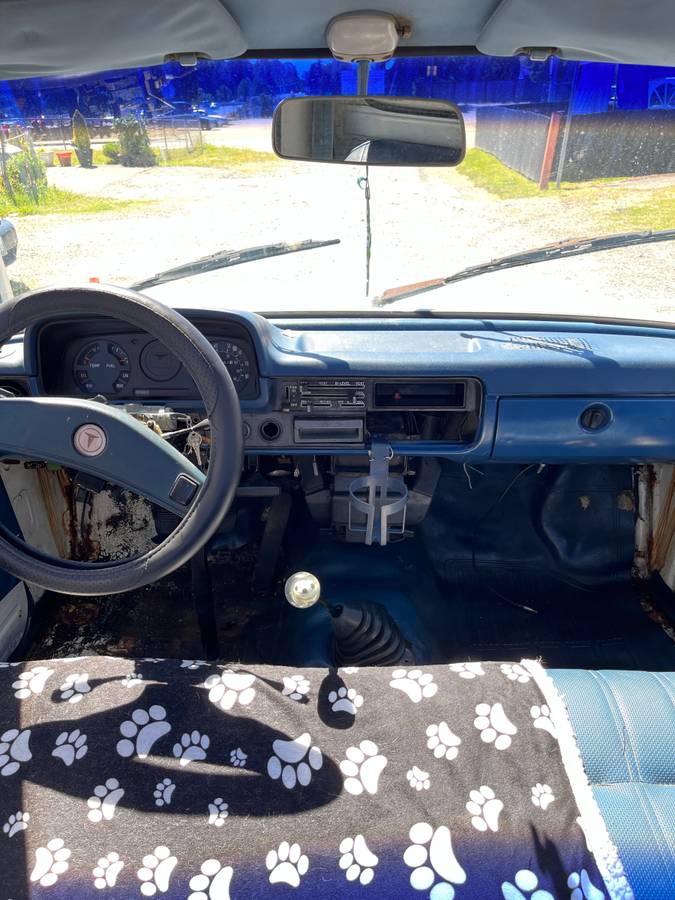 Inside, it’s as beat-up as you would expect. The rubber floor mat is half gone, and I imagine the blanket over the seat is covering some really ratty remnants of blue vinyl. But as we’ve seen in other vehicles from this era, the minimalism of the interior is a breath of fresh air. And that’s a good thing, because without A/C, fresh air is your only option. It also appears to be lacking a radio, so let’s hope you can infotain yourself.

The seller says this truck runs and drives great, but will need tires soon. Luckily, they’re cheap; you can probably re-shoe this truck for under $500, and then wear those down to the cords. 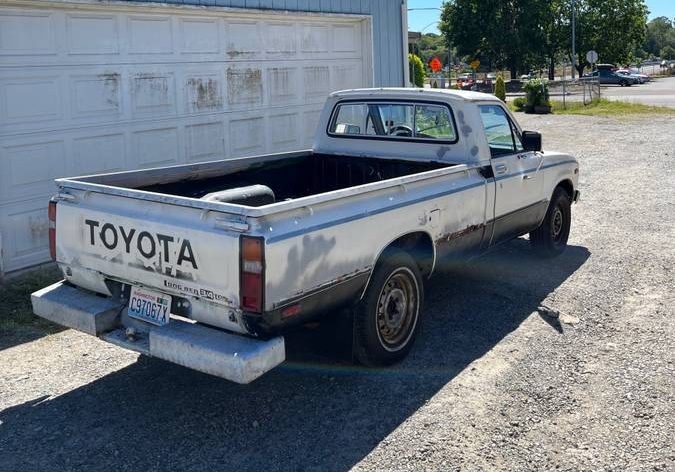 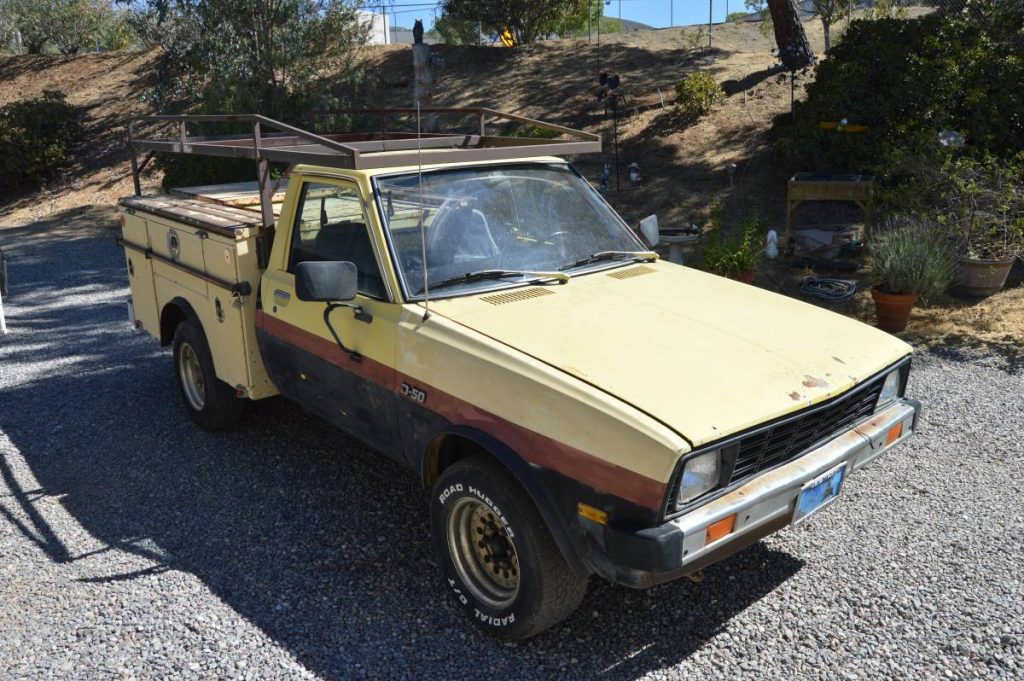 This is a new one on me; I’ve never seen a D50/Arrow/Mighty Max with a utility bed on it. Utility beds are rare on small trucks anyway, but on a D50, especially what looks like a Sport model? It’s got to be a unicorn. 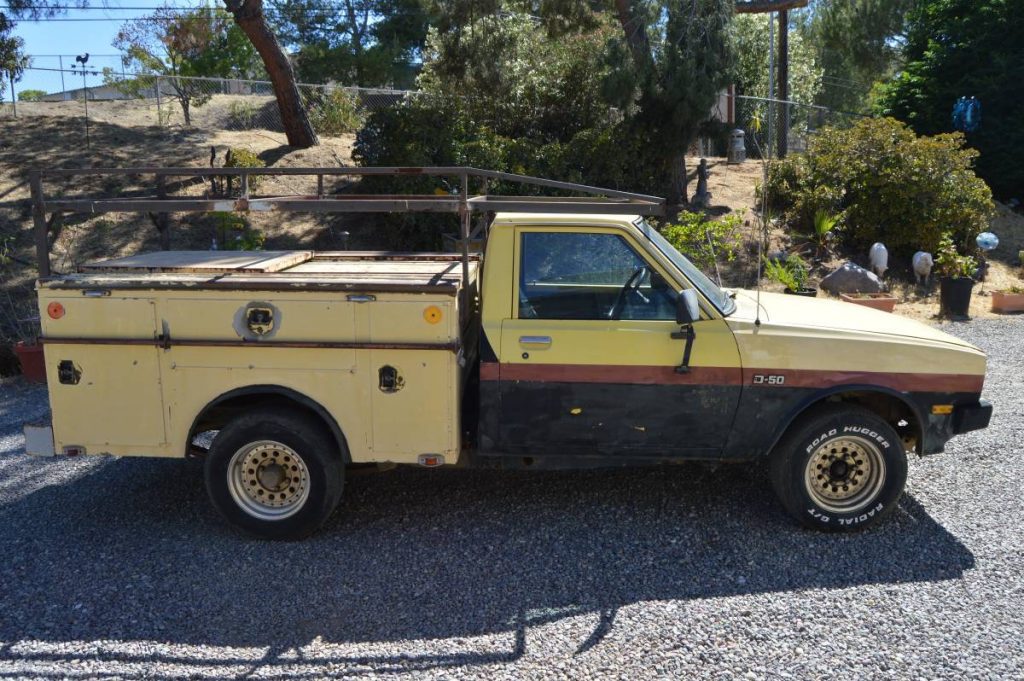 This truck is, of course, not a Dodge at all, but rather a Mitsubishi. Chrysler never did build their own small pickup (unless you count the Rampage), relying on Mitsubishi’s Mighty Max to fill the space below the D-series in their lineup until the “mid-sized” Dakota came along in 1987. The truck was sold as the D50, Dodge Ram 50, and Plymouth Arrow at various points. This one, by the looks of the interior, started out as a Sport model, which would mean it has the larger 2.6 liter Mitsubishi four. 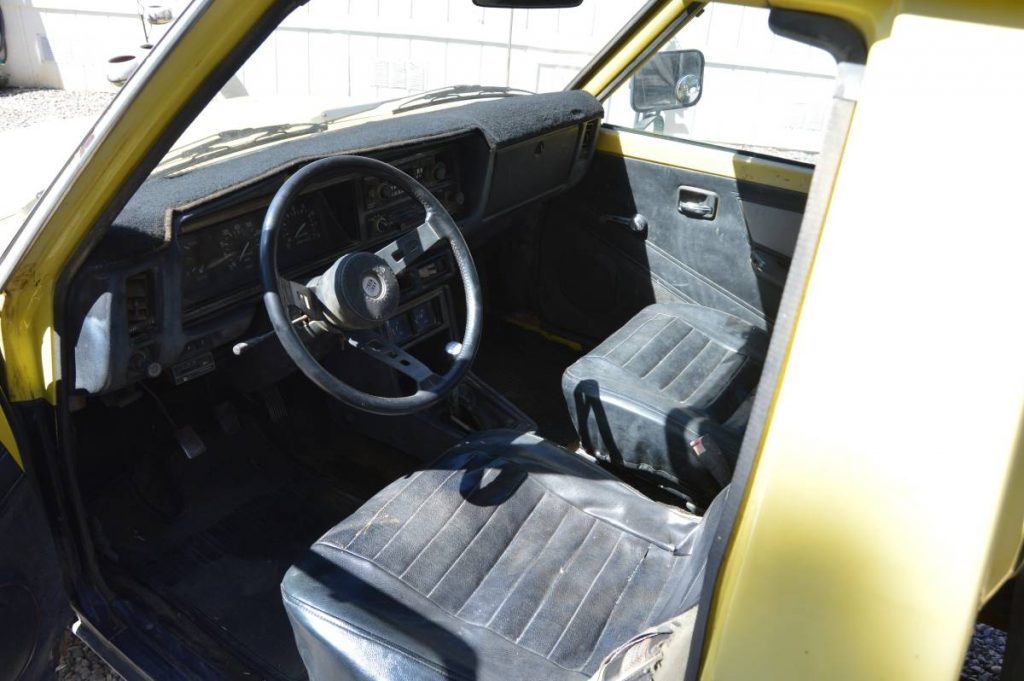 Bucket seats and a racy three-spoke wheel in a work truck? Sure, why not?

The rest of the truck looks like it has lived a hard life, but that is, after all, what trucks are for. And it looks like it still has some life left in it. It could use a repaint, especially on the utility box, but I don’t see much in the way of rust that would be a problem. It would be a cool ride for a handyman or painter or someone, with a little tidying up. 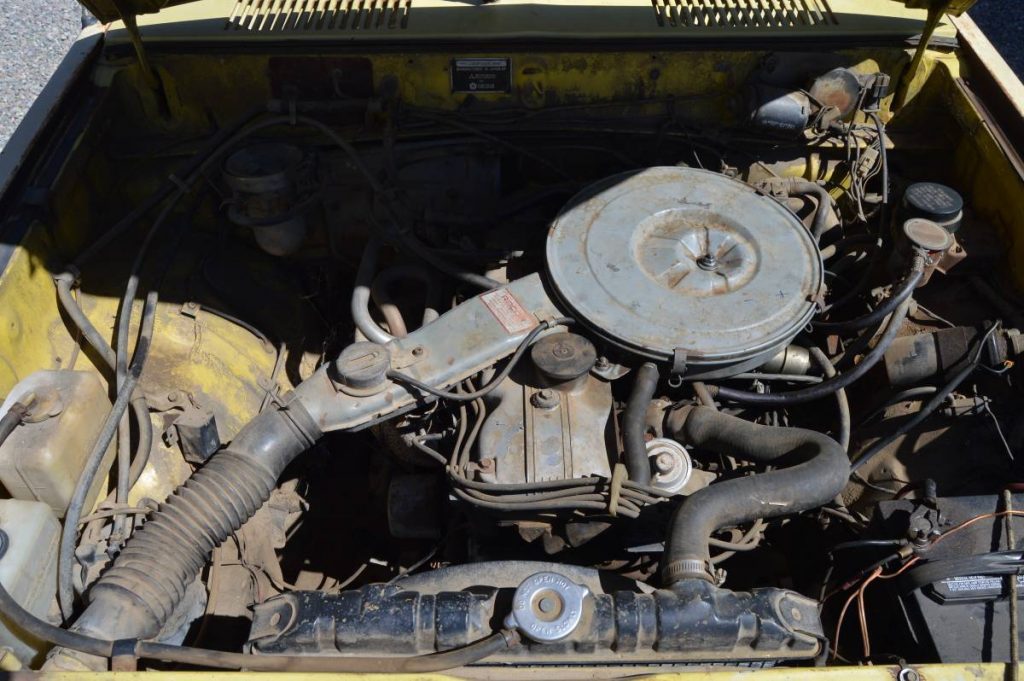 We don’t get much detail about its mechanical condition beyond “it does run and drive,” but that’s 80 percent of the battle right there. If it can come home with you under its own power, you’re already ahead of the game. Obviously you’d want to go over it with a fine-toothed comb before relying on it for work, but it’s a simple truck. 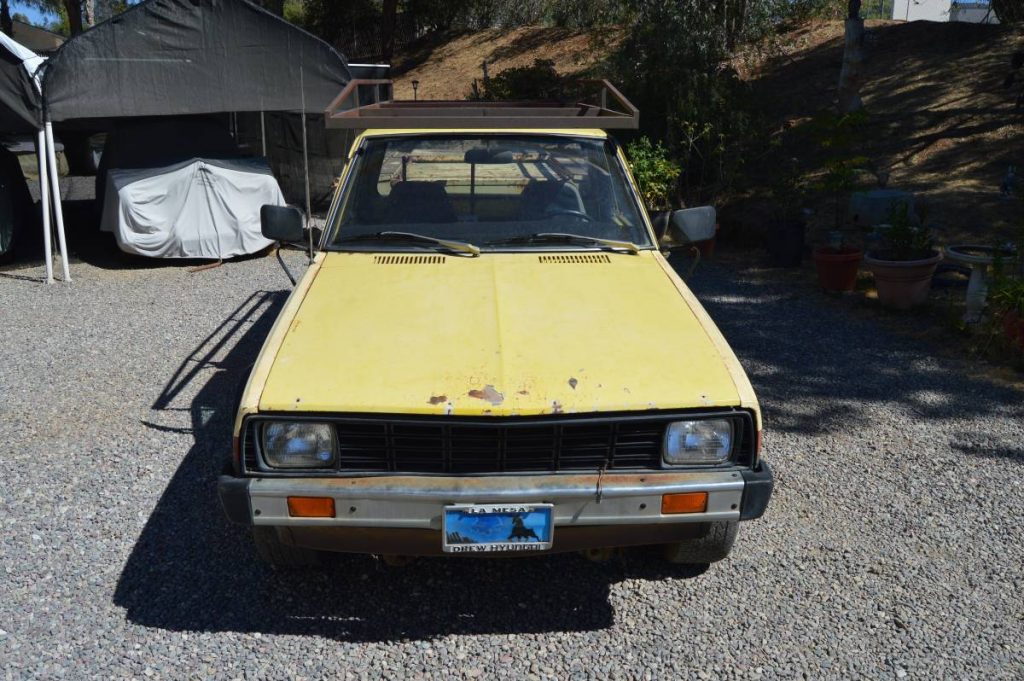 And it’s got a good face. It kinda looks like an old cigar-chomping foreman, tough but fair, chuckling at your joke and then telling you to get back to work.

Trucks don’t have to be gigantic to be useful. And they don’t have to be intimidating to be tough. These two prove that, and either one looks like it’s ready to get shit done. Which one would you add to your fleet?