David likes to call me up and ask about the old 1989 Ford F-150 he bought for me, because even if he decided he didn’t have the time/space/energy to deal with yet another old beater (well, we know how long that lasted) he can definitely enjoy it vicariously through me. So, he’ll call and just want to know how the truck is doing and when I drove it last and how it felt and speculate on the issues with the clutch and have me describe the feel of the vinyl seats in detail or the smell of the exhaust. If he could just say “hey, put the F-150 on the phone” and talk to it directly, I think he would, and I think it would end up in one of those “no, you hang up first” kind of situations.

Anyway, during one of these calls, David and I were talking about the truck and realized something significant about trucks and the culture we live in: when it comes to level of shittiness, cars and trucks are not judged the same way. Trucks get a pass for coolness in ways that cars simply don’t, and this is an idea worth exploring, because I’m not entirely certain what’s going on. In simplest terms, it’s this: a beat to shit car is embarrassing, but a beat to shit truck is cool. Why?

Just so we’re all on the same page here, let me break down exactly what I’m taking about, using my own truck as an example, a 1989 Ford F-150 with a lot of wear and a very clumsy and peeling hand-brushed purple paint job. Let’s just break down some basic facts about this truck: it’s rough in a lot of places, it has broken trim parts inside, it’s scratched up and dented and as I mentioned, the paint job was done by hand and is peeling so badly on parts of the hood it looks and feels like stucco. 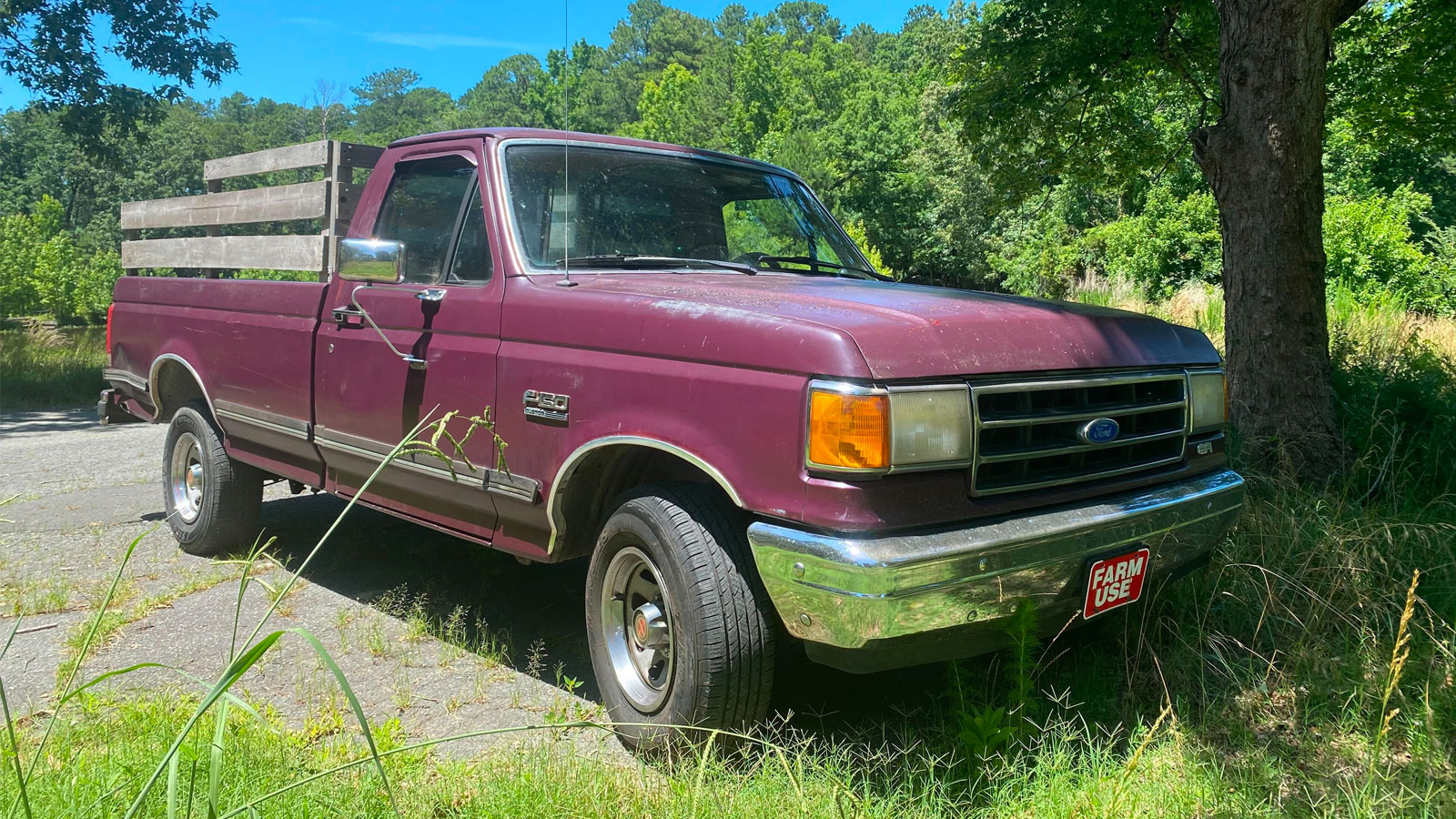 This truck is also common as boogers in nostrils, a Ford F-150, the best-selling vehicle in America for years and years. It can make zero claims of exoticism or rarity. Everyone has seen these, all over the place, all the time. Seeing one is a non-event.

The transmission is agricultural and grinds going into reverse and first, and, let’s be honest, potentially any gear, of which there are only four. There are all kinds of evidence of weird fluids that have been spilled in the bed. It’s the opposite of elegant or refined or sleek, it doesn’t telegraph wealth or overt status or anything like that at all. Oh, and the muffler is currently banging around loose in the bed.

And yet, somehow, it’s cool.

Now, let’s compare this truck to another vehicle in Ford’s lineup from 1989, something non-truck but as close as we can get in other ways, another mass-market big-selling car, like the Taurus. The Taurus sold for a bit more than this F-150 did (the F-150 went for about $11,000 in 1989, while the Taurus started at about $15,000) but we’ll call that close enough. If you had a 1989 Ford Taurus in exactly the same condition as my F-150 – a common, non-exotic or inherently that interesting car, runs basically well, transmission makes awful grinding sounds sometimes, some interior trim broken off, dents, hand-brushed purple paintjob, muffler banging around in the trunk – and you pulled up somewhere and got out of that car, nobody would think you were cool at all. They would think look at that poor bastard, and they’d spend a moment imagining all of the miserable life decisions you’d made to get you to the point where you were rolling around in a sloppy purple Taurus with your muffler in the trunk. 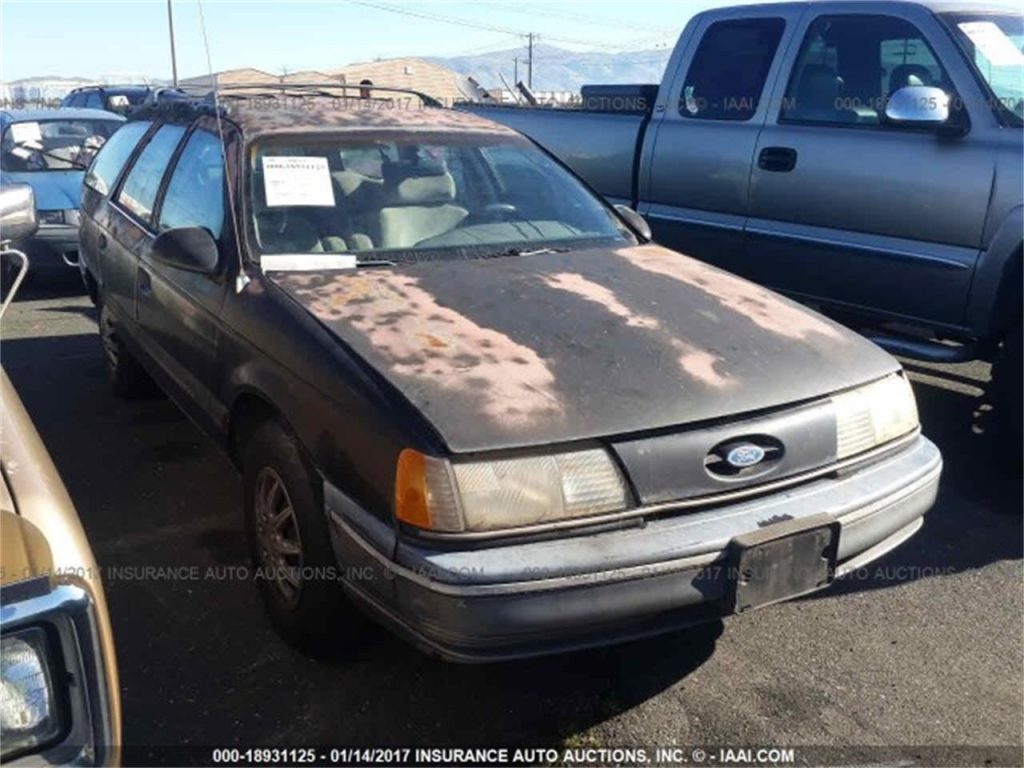 Keep in mind, in this thought experiment everything else about these two vehicles is the basically the same – same manufacturer, same badges, same condition, same color, same everything, except one is a four-door sedan and one is a truck. And one immediately casts you as a loser who probably does weird shit like eating ketchup sandwiches or drinking beer through a straw while the other subtly implies you may be a cool sort of person who does interesting things in their spare time, possibly including chain-saw sculptures.

Still not convinced? Okay, look at this picture I took of my truck yesterday: 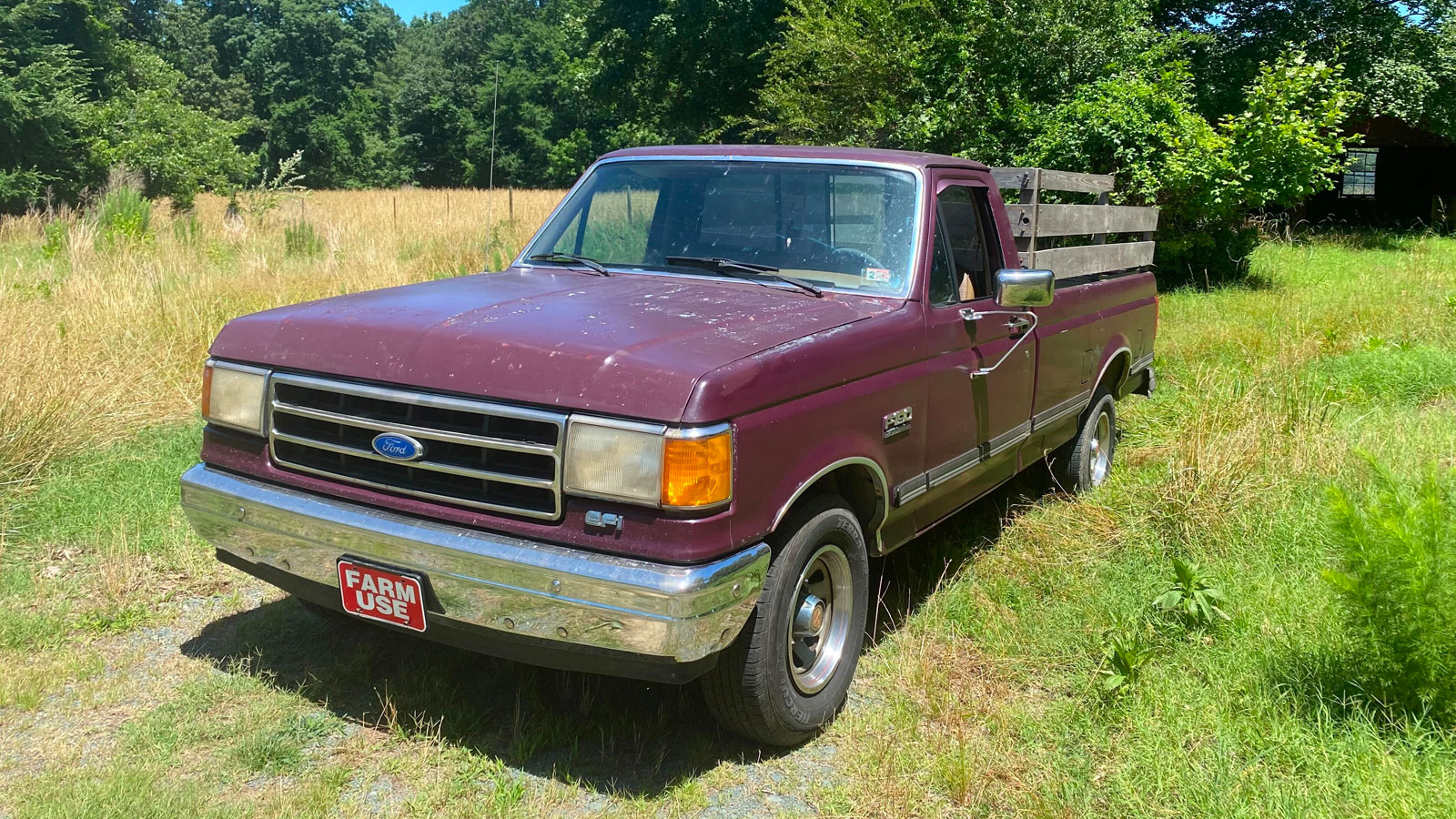 It’s just my shitty truck. But it looks kind of great out there in the verdant greenery, basking in the sun. How would this exact same photo look with that Taurus? Or a similarly-battered Honda Civic or a Nissan or Chevy or whatever non-truck? It wouldn’t be nearly as appealing, it’d just be some shitbox rusting in a field, as opposed to something that manages to evoke ideas of carefree summer nights and honest work and the occasionally intoxicating smell of sweat on skin any number of idealized, romanticized ideas about a life that we may never have even ever experienced.

This isn’t unique to Ford or any particular carmaker. Here’s another example: I went to Copart and looked for two late-1980s Toyotas, one a car and one a truck, and grabbed two of the first results I found. Here they are, a 1989 Toyota Camry and a 1987 Toyota Pickup, both in about equally shitty condition: 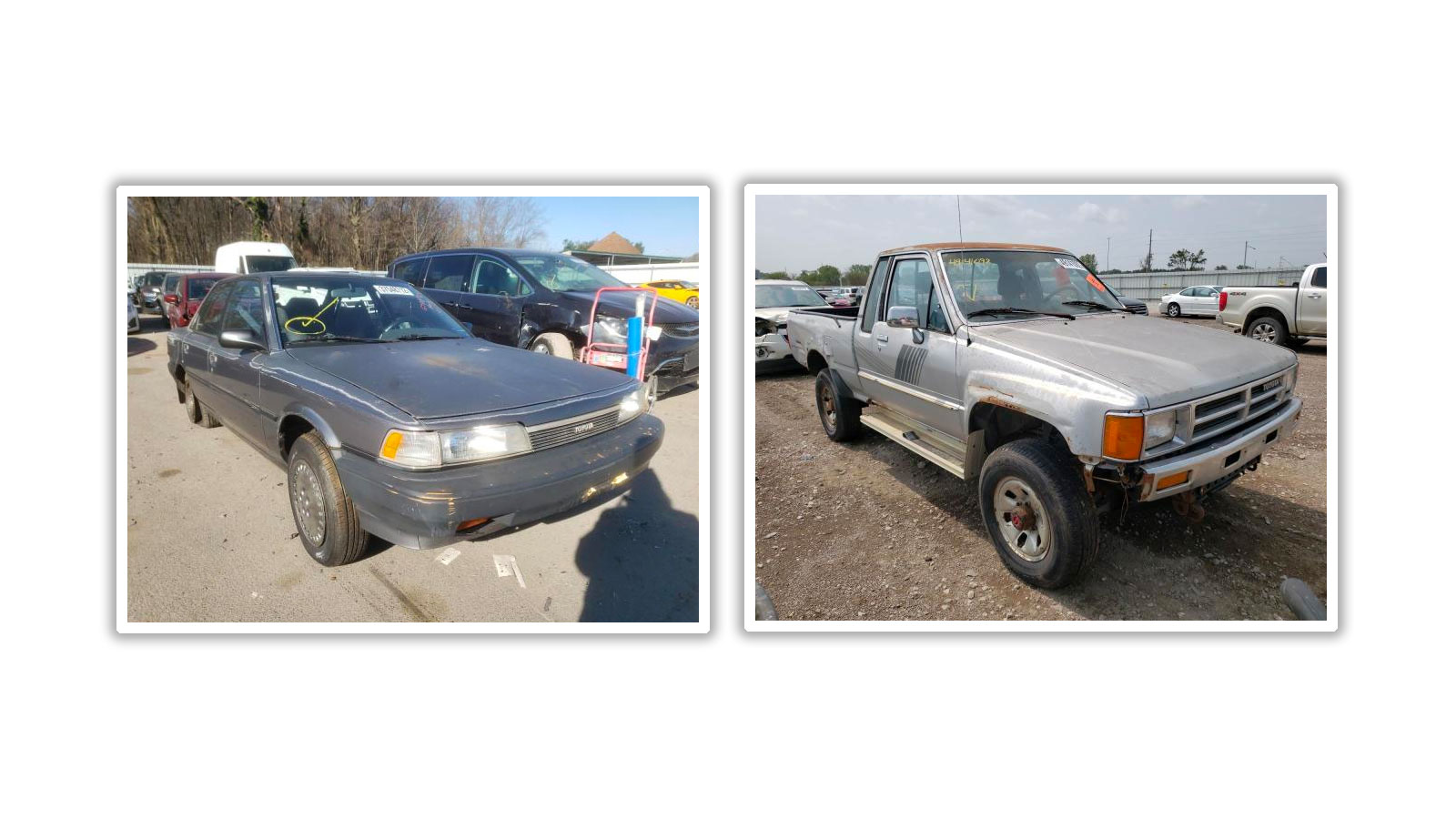 Which of those would you rather be seen in? The Camry feels like a car you’d be driving because you had no other choice, and the truck feels like something you might drive because it helps you do things you want to do. The truck feels intentional.

Of course, this isn’t really rational, though we can come up with some reasons why it may be the case: trucks are, ideally, designed to do rugged, hard work that can have the side effect of taking a toll, visually, with scraped and dents and other evidence of use and wear. Our idea of a truck is one that can accept physical imperfections and consider them character, while our idea of conventional cars like sedans or hatchbacks or even SUVs and Crossovers is one that regards any wear or visible damage as an actual flaw, something that only devalues instead of adding charm or character.

If you need more evidence that this double standard is real, think about fashion shoots you may have seen with cars, in catalogs or on billboards or wherever. Cars do show up in these shoots as backgrounds or props, and those cars are either charming, interesting, usually vintage cars like classic Minis or Beetles or Fiat 500s or Citroën 2CVs, and those can sometimes be in rough condition, but their unusual, appealing looks and relative rarity give them a pass. 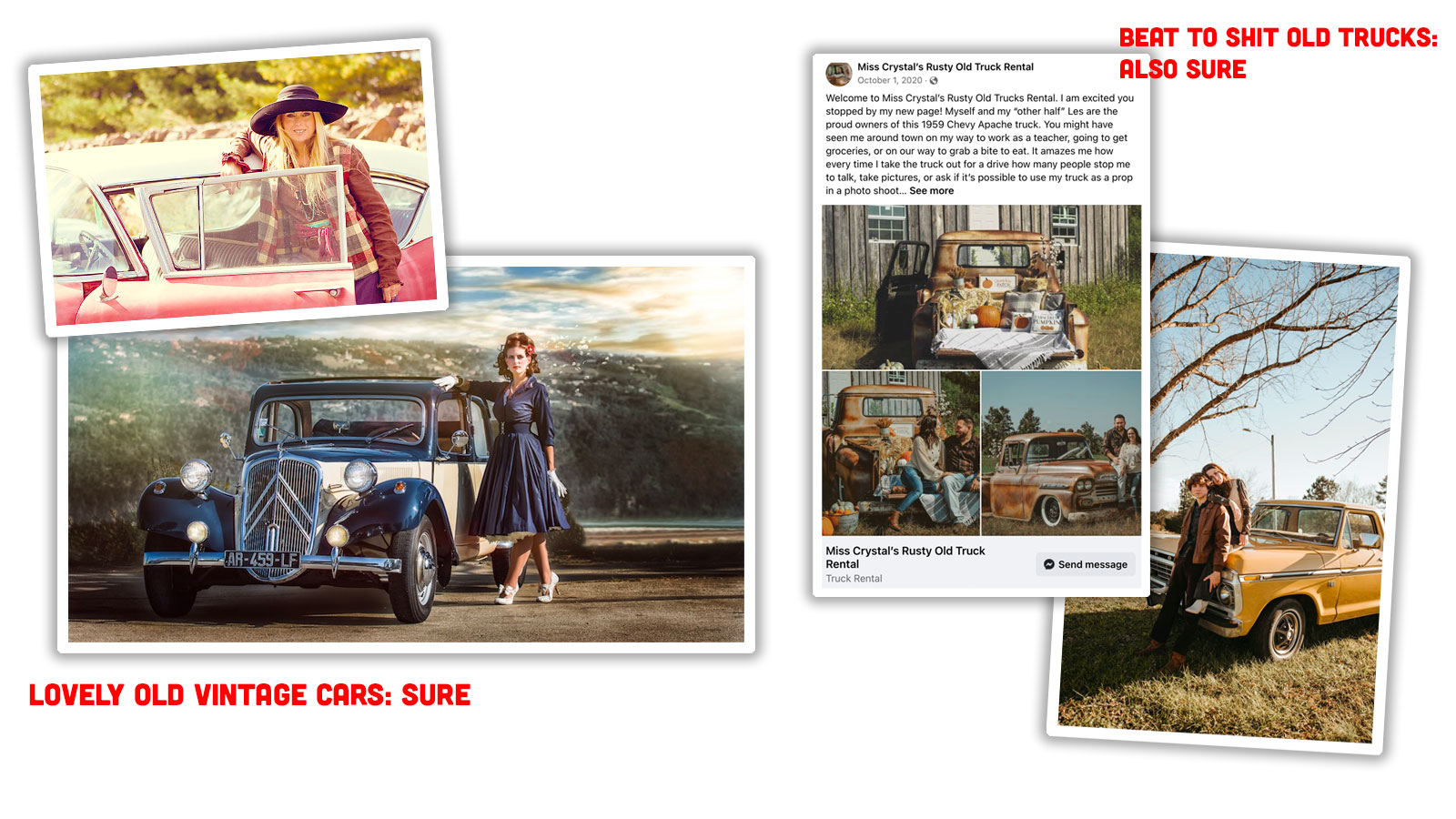 There is also plenty of fashion photography that uses lovingly-maintained vintage cars, or even rougher ones, but only if they’re old enough or interesting enough to have a following. If it’s a mainstream, common vehicle in fair to crappy condition, no fashion photographer is going to use it. Nobody is draping a model over the hood of a 1991 Chevy Lumina with surface rust and mismatched door.

But they might get a model to perch on the open tailgate of a slightly rusty 1991 Chevy C/K 1500 truck with t-shirts for seat covers, and that would be just fine.

Whatever is going on here says a lot about our society, because it doesn’t stand up to a lot of empirical scrutiny. A beat-to-shit hatchback or sedan can have accomplished as much tireless, important work as a pickup truck, and there are plenty of pickup trucks that have spent lives hauling nothing more rugged than grocery bags. But the truth doesn’t matter here, it’s all about perception, because cars and trucks aren’t really rational things.

The fact is that wear and tear and evidence of hard living turn into character and dignity on a mainstream, common truck, and shame and disgrace on mainstream, common car. One suggests a life of honest, gritty work that ends with the driver squinting into a sunset, satisfied and at peace, and the other suggests a life of poorly-paid jobs, indignities, and a day that ends drunk and asleep face-down in a bag of Cheetos. I’m not saying it’s fair, I’m just saying that’s how it seems to be.

So, the take away here is that if you don’t have a lot of money but are sensitive to how your car makes people perceive you, you can get away with a hell of a lot more with a shitty truck than a shitty car. And all it costs is more gas money and everyone asking you to move their couches.

Not the worst deal.

I'm a co-founder of the Autopian, the site you're on RIGHT NOW! I'm here to talk to you about taillights until you cry and beg me to stop, which I absolutely will not. Sorry. Hug? Also, David's friend.
Read All My Posts »
PrevPreviousBattle Of The Tiny Fujis: 1989 Subaru Justy 4WD vs 1970 Subaru 360
NextUnder-Appreciated Clever Innovations: The Škoda Felicia Fun’s Secret Sliding Supplemental Seat System SetupNext